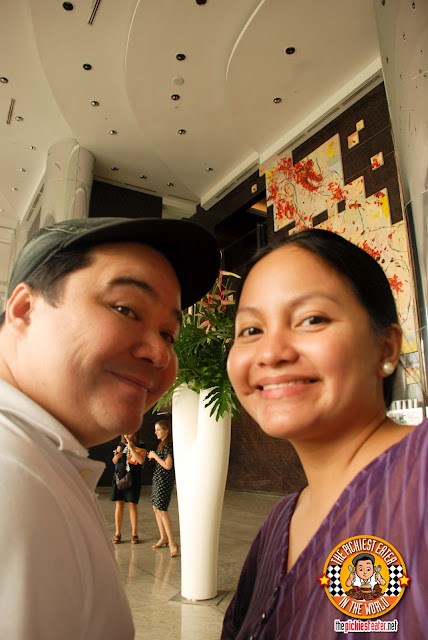 To Rina and I, travelling to the South is pretty much an out of town trip to us. Which is why when I visited Alabang a few months back, I was left in awe when I saw someone dropped a Five Star Hotel in the Filinvest area.

Acacia Hotel sprouted out of nowhere to become one of the premiere hotels in the South. For me, it would make a nice place for a "Staycation", if in case Rina and I just want some peace and quiet.

I was pleased to find that Acacia Hotel also has a restaurant in it, called Acaci. With my weakness for hotel buffets taking over my senses, my trip to take Acaci's buffet a little spin was inevitable.

You might want to keep reading, because by the end of this post, I'm hoping I said enough to make you want to join The Pickiest Eater in The World's Giveaway #9!! 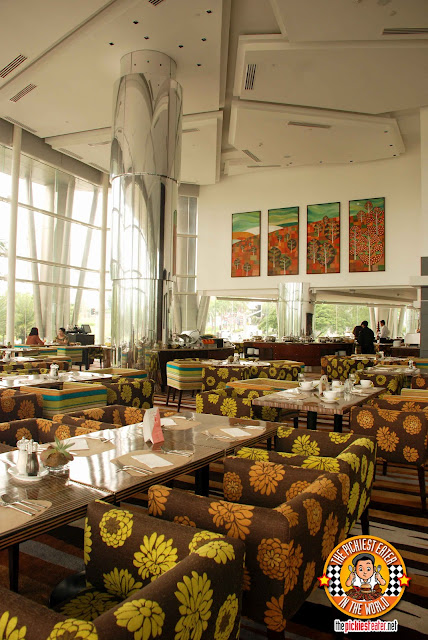 Acaci is the cornerstone of Acacia Hotel's culinary campaign of excellence. The cafe, located at the hotel's mezzanine area, is luxurious dining area, with high ceilings and beautiful picture windows that span across virtually the entire side of the building. The windows allows for the sunlight to beam into the restaurant, giving it a fresh, and vibrant ambiance. 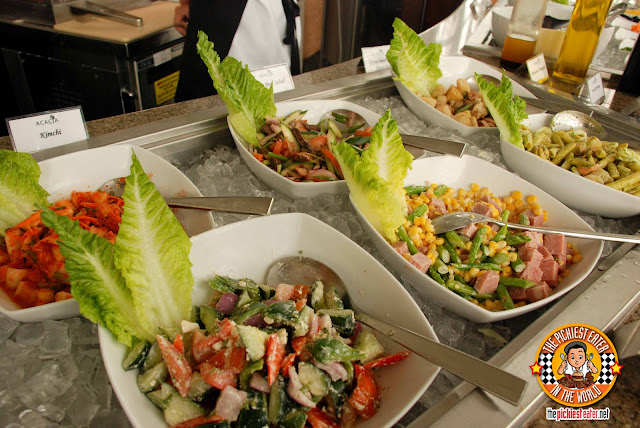 For starters, people who enjoy their greens before a meal will get a kick out of Acaci's salad bar. Among the choices were Beef Salad, Kimchi, and Potato salad. Rina bet me P50 bucks that I wouldn't eat anything from the salad bar. I promptly came back to the table with some Pesto Penne salad, and a roasted corn salad with cut up chunks of ham. 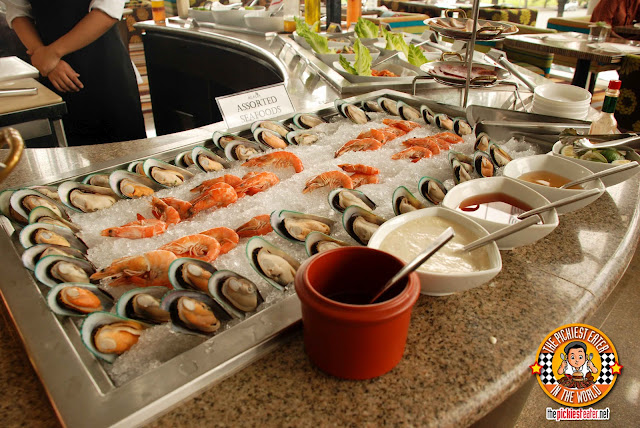 Acaci also boasts of a cold bar with fresh seafood and other appetizers. I'm not too fond of shrimp and mussels, but Rina got a kick out of it. 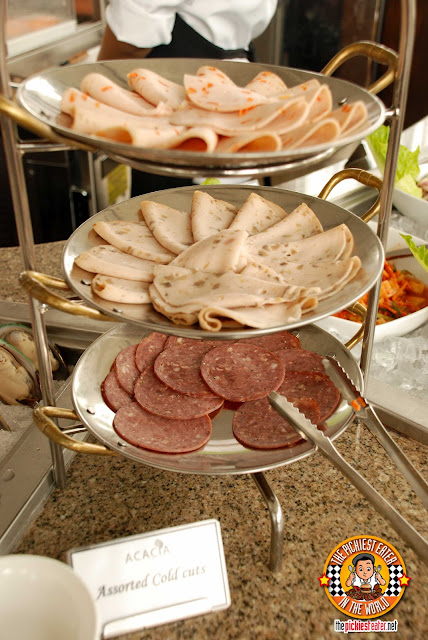 For carnivores like me, cold cuts and bread are a good way to start the meal. I was particularly found of the salami! 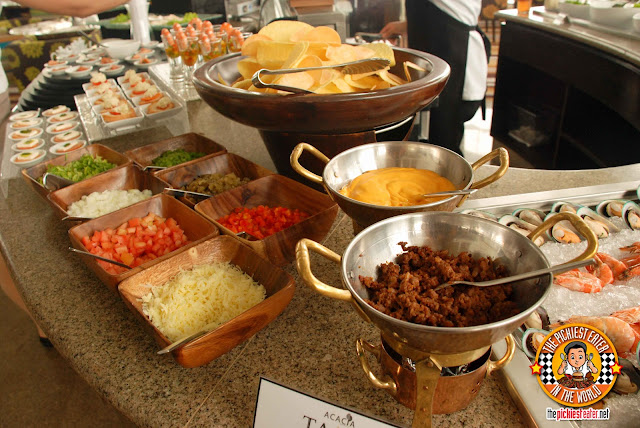 A Taco Station isn't exactly something you'd expect to find at a Five Star hotel buffet. But in my opinion, its what makes Acaci unique. I actually just crumbled some taco shell, mixed in some meat with the cheese and cheese sauce and made me a taco salad.

Yet ANOTHER P50 bucks in my pocket. Cha-Ching! 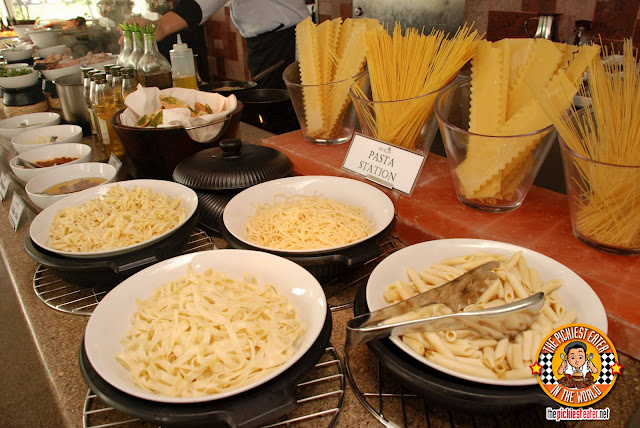 Rina was delighted to find a Pasta Station. The station offered different type of pastas, and a nice selection of sauces to choose from. As expected, Rina went straight for the Creamy Carbonara. 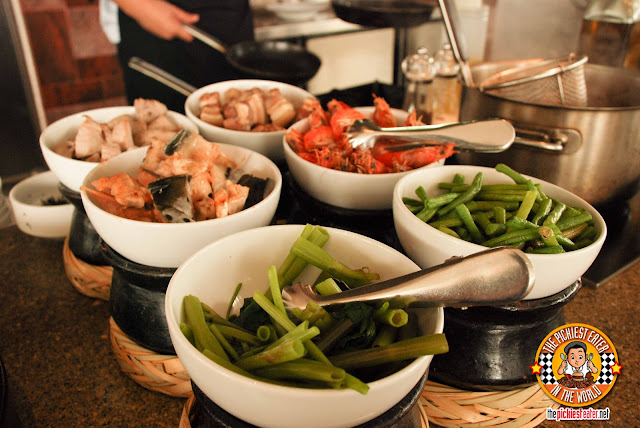 Yet another interesting Station set up by Acaci was the Sinigang Station. You can basically customize your own Sinigang to your liking.. Shrimp, pork, etc.. 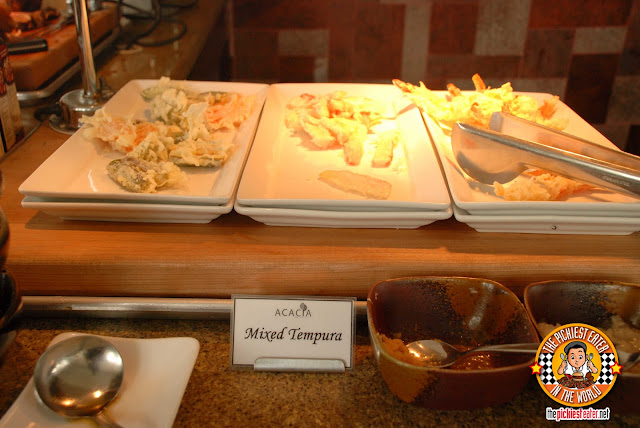 There are a few things that I believe a good buffet MUST have, and A tempura station is one of them. Apart from the required shrimp, they also had mixed vegetables as well. I was also pleased with the frequency that they filled the platters. (The last time I went to Yakimix, I was extremely disappointed with how long it took between refills.)

Among the dishes that were served, the ones that stood out for me were... 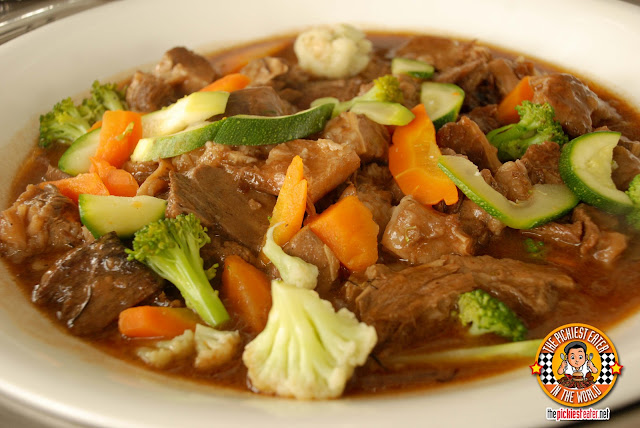 The strips of beef in the Red Wine Braised Beef Stew were reasonably tender, and the medley of the vegetables, which included carrots and zucchini, gave it a hint of sweetness that melded well with the acid brought on by the tomato based sauce. 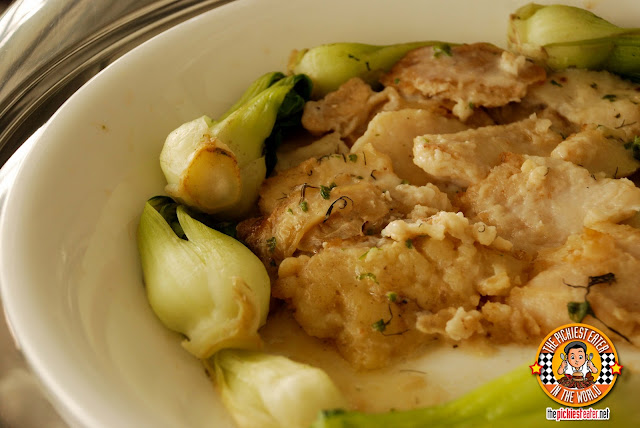 The Steamed Cream Dory was quite delicious. The Dory itself was amazingly soft, and the herbed cream sauce coated it beautifully, and enraptured it with flavor. 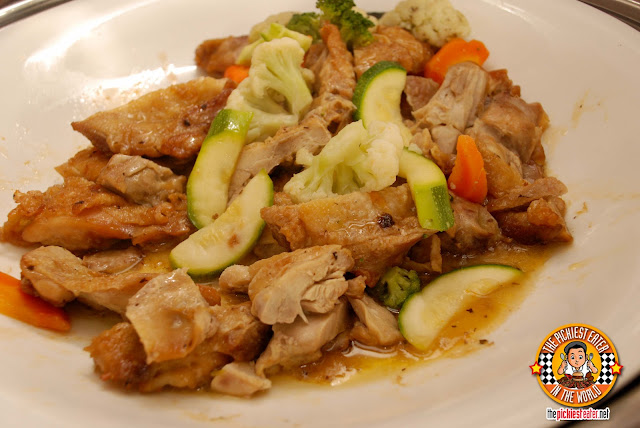 Acaci had a deliciously different take on one of my oriental cuisine favorites, Lemon Chicken. Instead of chicken fillet cutlets bathed in a heavy lemon sauce, this was more like pan fried chicken, drizzled in a lightly sweet, citric sauce.

Another thing I look for in a hotel buffet, is a good carving station, and much to my elation, Acaci had two types of dishes up for slicing for your eating pleasure. 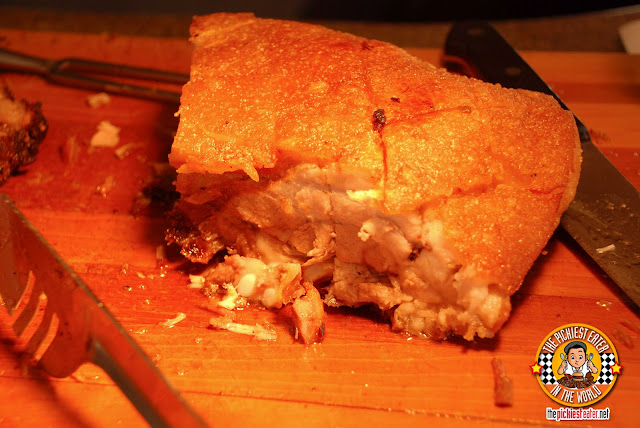 The first was Lechon Kawali. One would be surprised to hear that despite being a huge fan of pork, I'm not all that crazy about Lechon Kawali. I don't like how the meat is a bit too dry, and the fat is too oily.

Acaci's Lechon Kawali though, was different. Since it was still in a slab and sliced for the guest upon request, it wasn't dry at all. The meat was in fact, quite moist, despite not being overloaded with fat, while the skin crackled with every amazing bite. 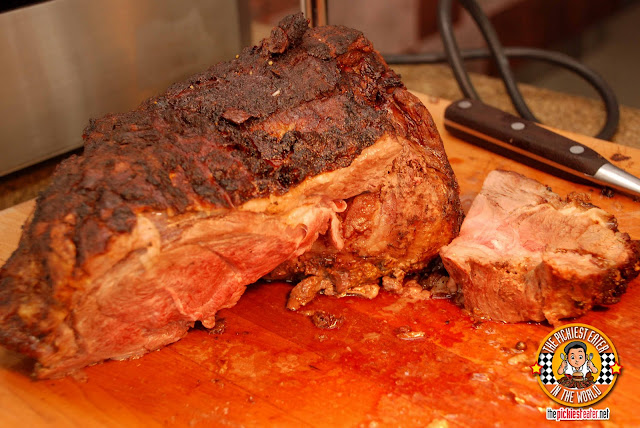 An amazing aroma emanated from the giant slab of Acaci's Roast Beef. It was a beautifully juicy cut of beef whose innate flavors really didn't have the need for gravy. Word of advice though.. Don't get the pre-cut slices. Ask for a freshly sliced one, because when left out for too long, the pre-sliced ones tend to dry up quickly. 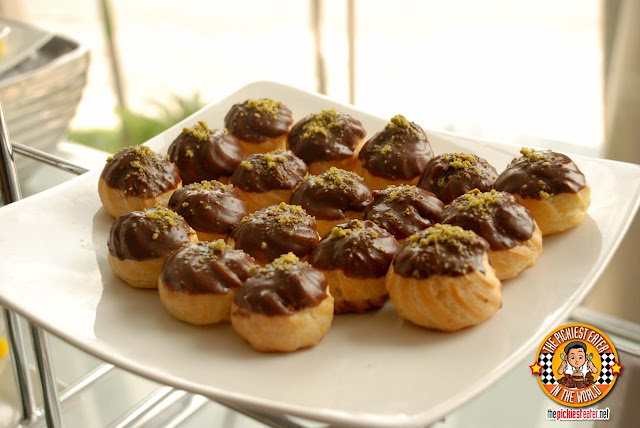 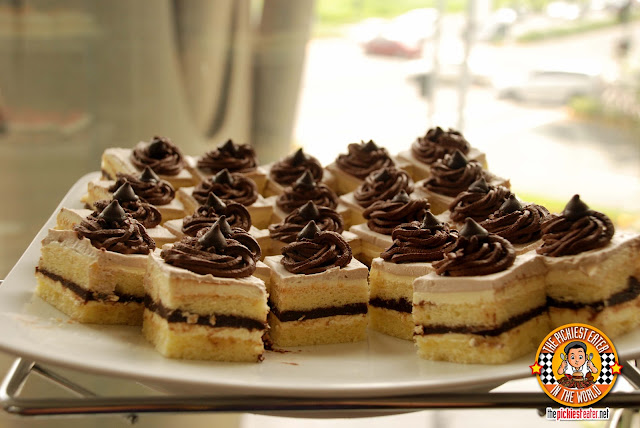 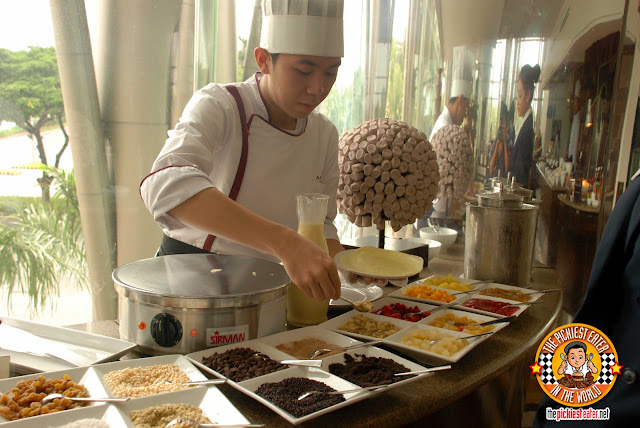 For Dessert, apart from the wide selection of pastries to choose from, Acaci has a crepe station that offers several types of fillings and toppings, ranging from fruits to chocolates. 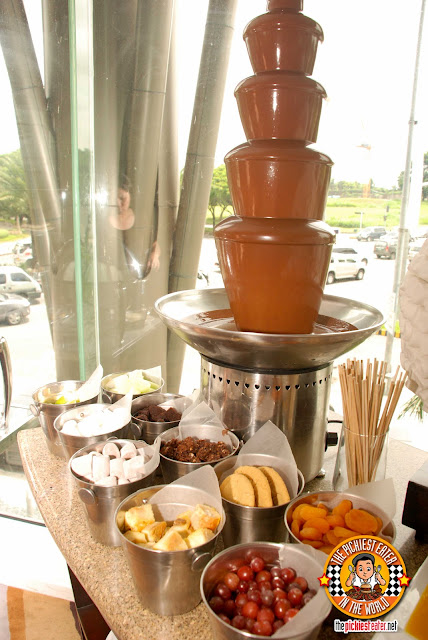 And another restaurant staple is of course, the Chocolate fountain station, that offers several fruits and sweets, all primed for taking a decadent dip into the running choco goodness. 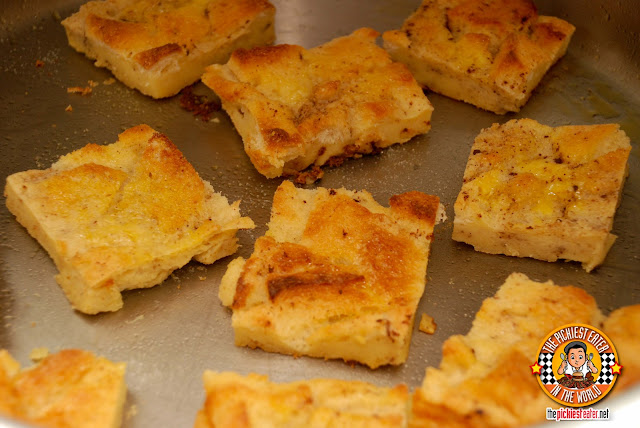 But by far, my favorite dessert was the bread pudding!


I hadn't been to this many stations since Holy Week! But Rina and I did have a wonderful time. The Acaci Buffet is something that I wish everyone could experience..

At P995 Net, It's one of the more affordable Hotel buffets in the metro.. but I'm giving away FREE gift certificates for a buffet Lunch or dinner for two at ACACI... for TWO Lucky readers!!

How do you join? Just follow the Rafflecopter widget!