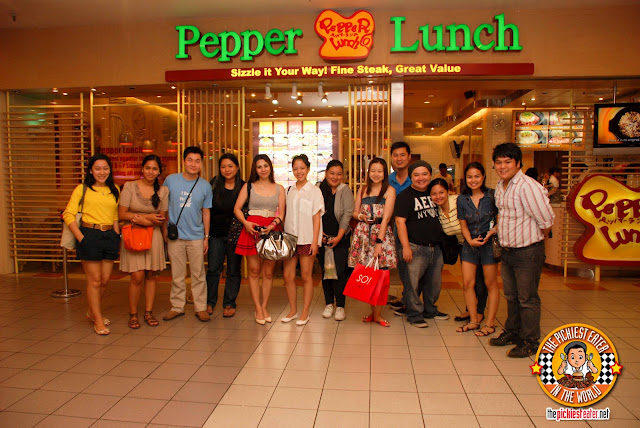 For some reason, I get a lot of surprised responses when people hear that I haven't attended very many events. Not counting last year's Blog Awards held in December, I only actually started becoming active in Blogger events this year.. and one of the first ones I attended was the launch of Breakfast Magazine, and the very first Breakfast Club meeting.

A day after my meeting with Mr. Jeroen Van Straten of Pepper Lunch had been set, I got an email from Kim, Editor in Chief of Breakfast Magazine, inviting me to the latest Breakfast Club event. I had missed the previous two because of the recently resolved episode in my life known as "The case of Baby Rain's Missing Yaya". But I was really kicking myself after I had seen the blog posts of other people from their events (And for a guy with short legs, believe me, its not easy to do!).


So after seeing that the invitation was for Pepper Lunch, It was a no brainer for me. And I knew Rina wouldn't forgive me if I didn't bring her along. Literally within seconds of getting the email, I replied, telling Kim that Rina and I were game.. even though we were already scheduled to have Lunch there the very next day. 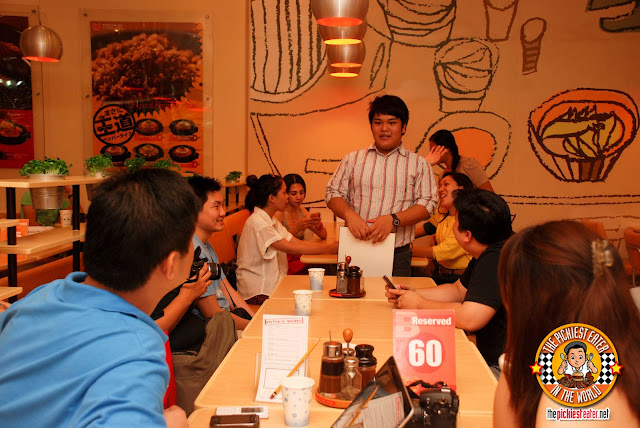 We started off the very casual and relaxed event with Bien, Marketing Officer of Pepper Lunch, giving us a short background on how Mr. Van Straten brought Pepper Lunch to the country.


In Rina's mind, Jeroen's journey in bringing Pepper Lunch to the country was probably the equivalent of an epic Harry Potter series. She most likely imagined him flying on a winged unicorn whilst being chased by vicious dire wraiths and the evil sorceress in his quest to bring the magical Sizzling Plates to the Philippines, and vanquish hunger.


"Jeroen Van Straten and the Sizzling Plates of Glory", sounds like a kick ass movie, don't ya think? 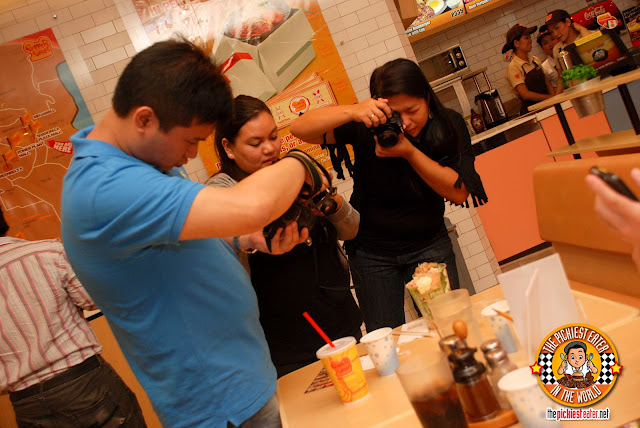 Just another ordinary day at a food blogger dinner

One of the best things about my blogs' setup, is Rina is the Photographer and I'm the designated eater and writer. I can sit back and relax while Rina and all the other bloggers scramble for the best shot of the food. (I'm spoiled like that, I know). 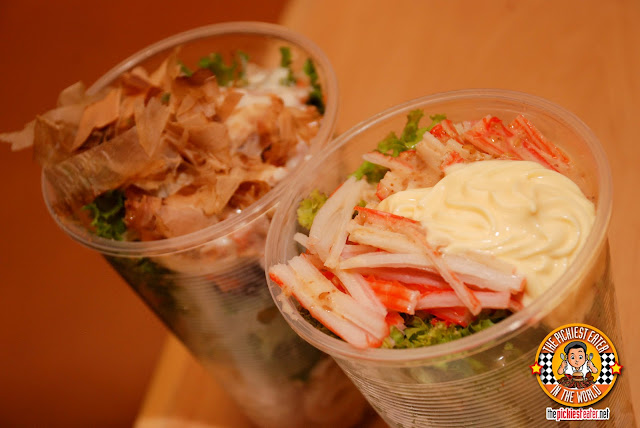 This was my first time to see Pepper Lunch's "Shake! Shake! Salads" in person.


Umm.. Hehe. I honestly don't know what to say next. 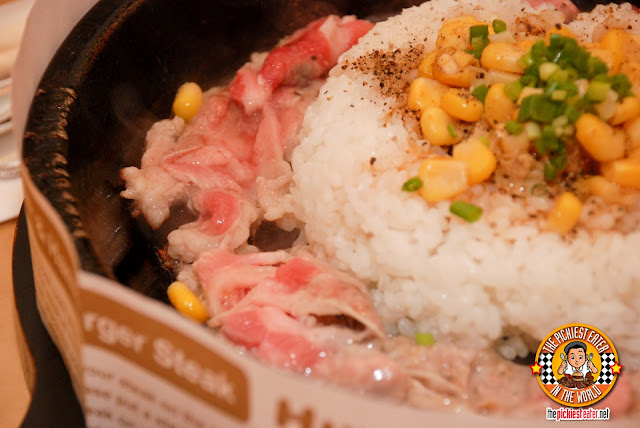 In my opinion, Pepper Lunch's Flagship product is the Sizzling Pepper Beef Rice. If you haven't been to Pepper Lunch before, this should be the first dish you should order. It will be the barometer in which you'll judge everything else in the menu. Only after you've tasted this should you explore the other items in the menu. 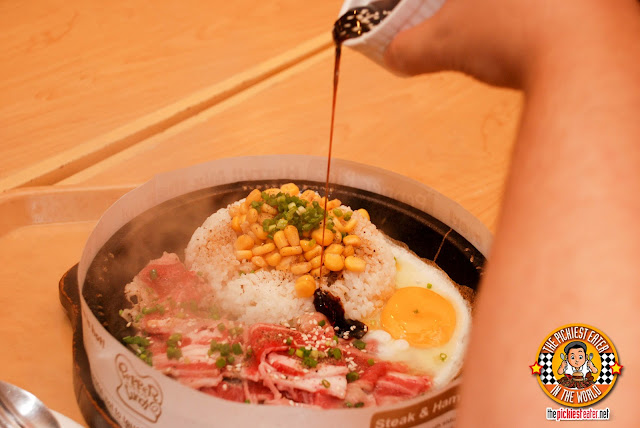 When it was my turn for the waiter to take my order, I ordered the Teriyaki Beef once again, which is currently my favorite. Wanting to leave myself with a little dignity, I discreetly whispered to the order taker, "Can you make it double beef, please?", which he politely obliged.

So you can imagine my horror when my attempts to spare myself from the embarrassment of being known as the only guy who ordered "Double Beef" was thrown out the window when the waiter bringing my order yelled out at the top of his lungs, "BEEF TERIYAKI...DOUBLE BEEF!!!!", just before placing it right in front of me.

Everyone was looking at me with a smile, so I just said, "Wow, they made it double beef for me? That was really nice of them!".

I have an eerie feeling no one believed me though. 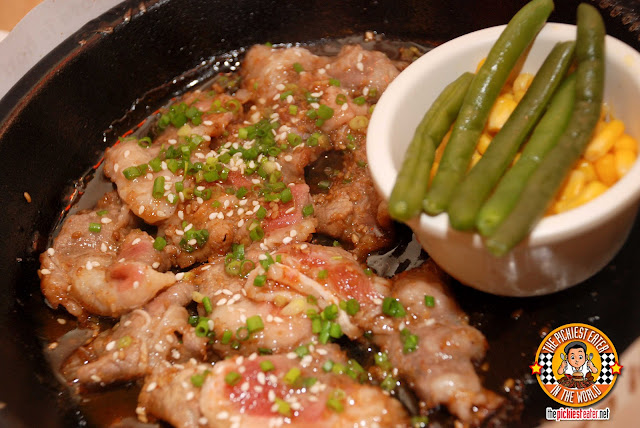 As I expected, Rina ordered the Beef Yakiniku 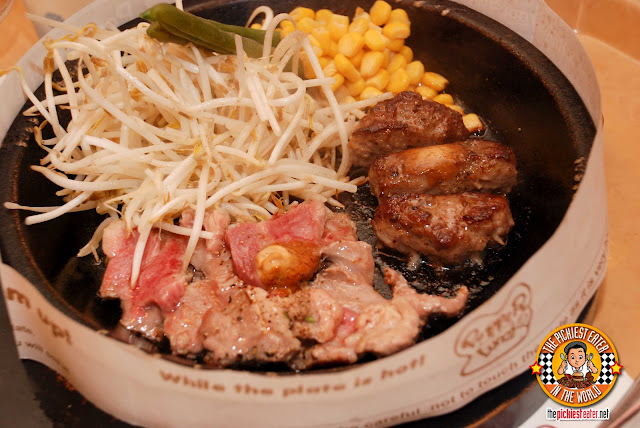 Some of the dishes the other bloggers ordered were
the Chicken and Hamburger Combo.. 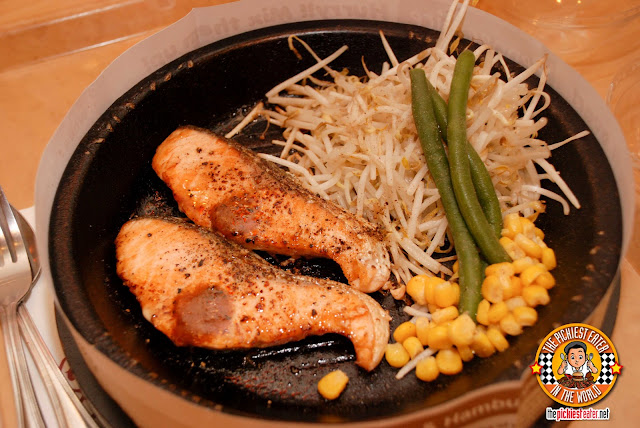 And the Double Salmon Steak

Since we were in a restaurant that we've been to more times than I could shake a stick, Rina and I somewhat felt like we had "Home court advantage". It was funny how everyone kept asking Rina and I for advice on what to order. 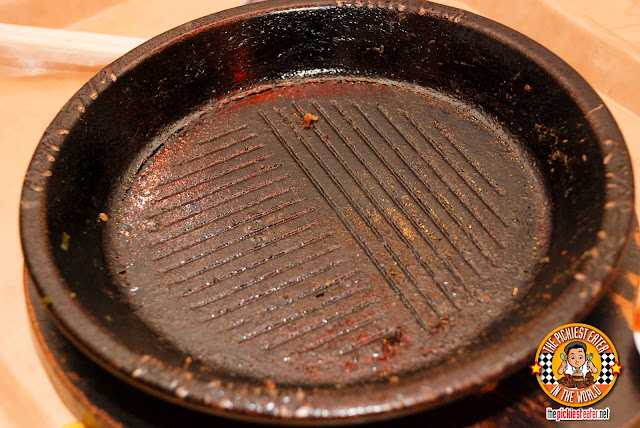 While we were talking, I didn't notice that.. Well.. I think someone was taking from my plate! I turned around for a few minutes and BAM! My sizzling plate was sparkling clean! 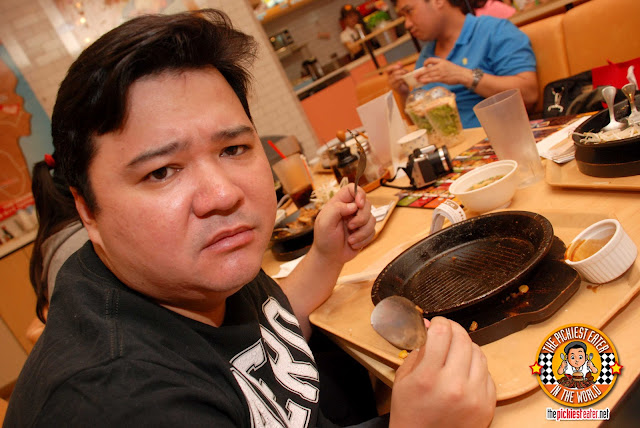 I'm not sure who exactly it was.. but I was sitting beside Yedylicious and Rachelle of "Hearty's Haven"... Not to mention Allen of Silken Hut was right in front of me.. Hmmm... I'm not saying it was them, but.... 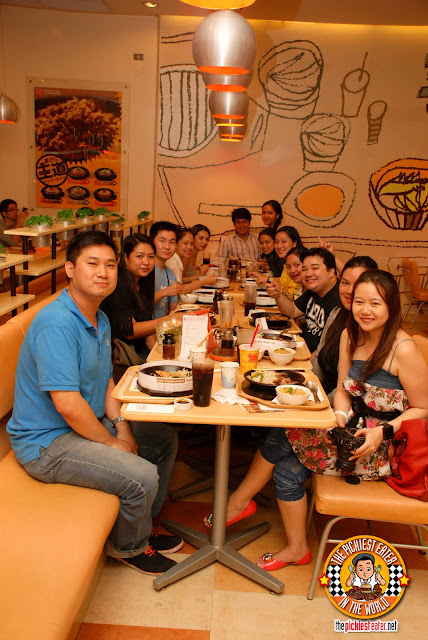 Thanks for the invite!

AND THE WINNER IS... 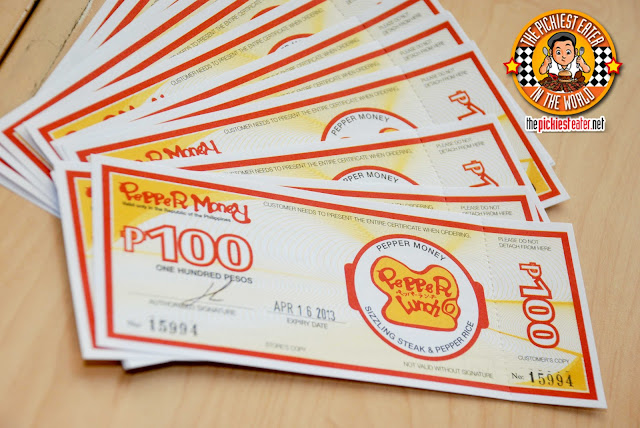 So this is the moment we've been waiting for...
The three winners of the Pepper Money!!

I'll be getting in touch with you all so we can coordinate
how I'll get you the prizes! 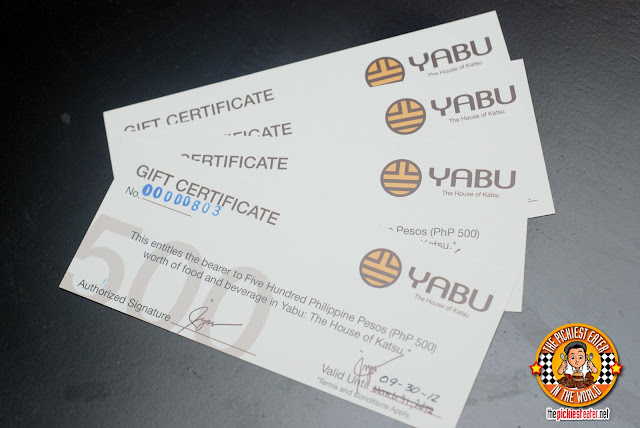 For those of you that didn't win,
don't worry Anniversary Giveaway #4 is still ongoing!

And stay tuned because we've got a few more giveaways coming up!