WHAT THE HELL AM I DOING AT HEALTHY KITCHEN?!?! 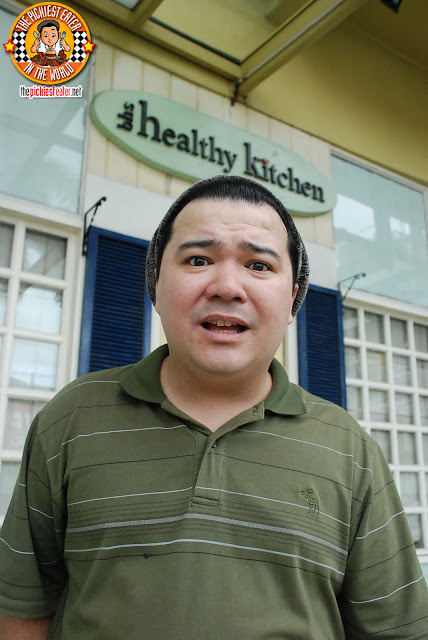 There was a time when i was trying to eat healthily. I hated that time. Seriously. Thank goodness I got over that really quick. It lasted- oh- about a week? It was the thought that counted, I guess.. hehe. I did manage to lose a little weight, but I doubt you could really tell the difference. My dream of losing weight actually led me to a place in Serendra that is known for out of the box type of meals that are actually good for you.

The cozy little nook is called "Healthy Kitchen." It sorta had a country home feel to it that i really liked, and I've read good reviews about itso I was excited to try it. One glance at the menu though, with it being sprinkled with words I had never heard before in my entire life, (such as "Wheat grass", "Anti-oxidants" and what was that other word again..? Oh yeah! "Sugar-free".) I had to ask myself, "What the F**K am I doing here?"

My memory of this place seems to be a little hazy, not due to a bad experience, but because the cholesterol from every other place I've been to since seemed to have washed it off my brain. 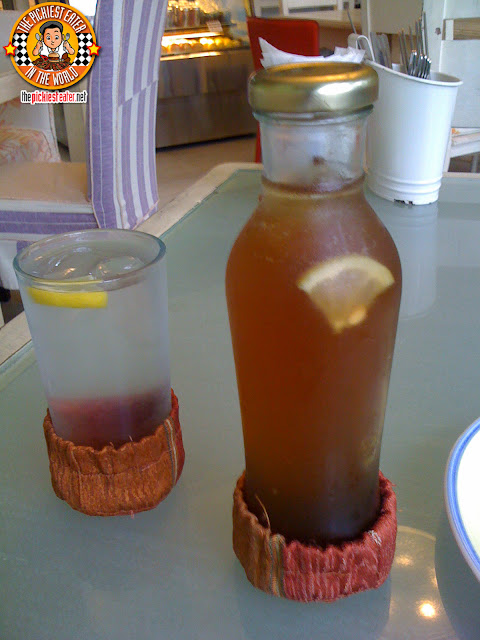 "Healthy Kitchen's very own brewed tea made with white tea leaves, providing one of the highest forms of anti-oxidants of all teas, infused with fragrant lemongrass or pandan leaves, which ever is available" - HUH??!

Rina ordered their Iced Tea (P95), and she found it to be quite refreshing, despite the fact that the description of it on the menu sounded more like something you'd read at the back of a box of Revicon or Centrum. It wasn't your traditional Nestle Lemon Ice Tea.. It seemed to lack the sweetness, making it more like brewed tea with ice. But we both agreed that the bottle that it came in was pretty cool. It reminded me of Old school Magnolia Chocolait bottles that your mom would reuse to fill up with water in the ref when we were kids. (Yeah you know what I'm talking about.) I could only take a sip of it though.. I don't usually drink Iced Tea because of my acids. 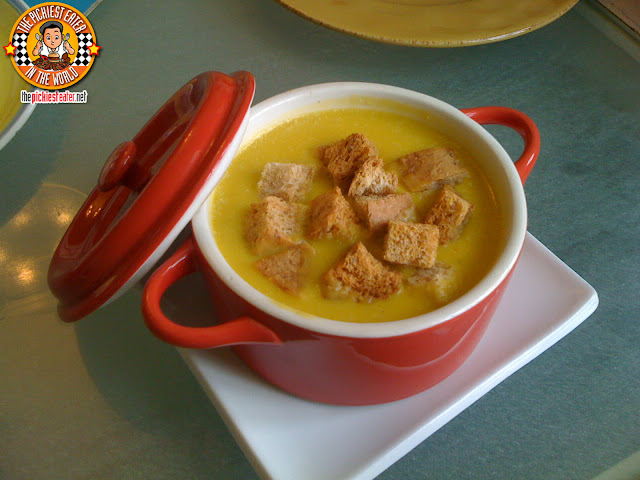 Soup of The day: Pumpkin

I'm not really a soup eater ( I find it a waste of stomach space), but when i DO order soup, Pumpkin (P95) is definitely among my favorite kinds. Considering it was a "healthy dish" this was actually a thick soup with great flavor of pumpkin to it. Again, the presentation was simple but unique. The soup bowl was looked like a small pot, with a lid and everything! I liked how the croutons were made of whole wheat bread, for those conscious of that sort of thing.(At that time I was. Yeah, that worked out real well for me.) 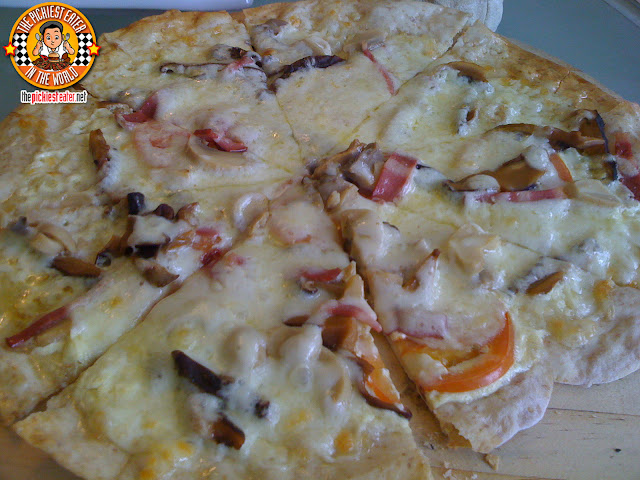 
Our very courteous waiter highly recommended "Lory's Pizza" (₱250), which i think was named after the owner or Chef. Since it was the only pizza they had that used Alfredo sauce with meat in it, I was sold, especially considering the "meat" in question was Turkey Bacon. For a "Healthy" Dish, this didn't taste all that healthy - and I mean that in a good way. The thin whole wheat crust did a superb job of substituting for the regular pizza crust. You could barely taste the difference between it being whole wheat or a Shakey's thin crust, simply because of the toppings of the pizza were excellent. I was a tad bit disappointed with the amount of Turkey Bacon on the pie though, (but then again, my taste shouldn't be made the barometer for how much a restaurant should use bacon in any of its forms.. they'd shut down within weeks) but the rich goodness of the cheese found a way to compensate for it. I've never had anything organic before (at least not consciously), but their Organic Fresh Mozzarella was phenomenal. More than anything, the cheese was the star of this dish.

Healthy Kitchen had some brown rice meals to make sure that you get filled up. They had an eclectic array of choices that would really test one's palate. 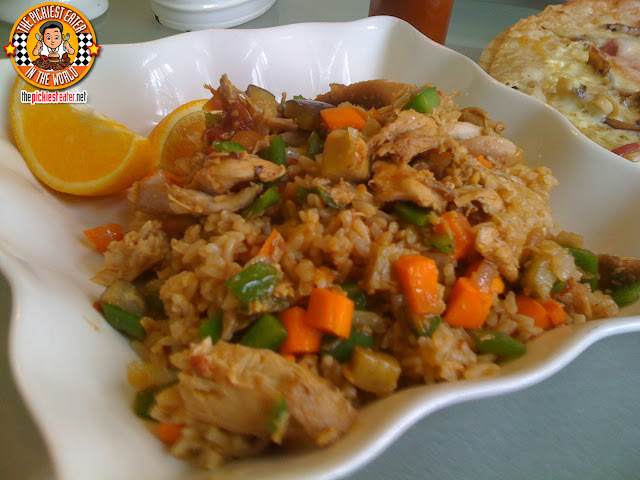 Chicken Adobo.. If that is in fact, your real name.


For reasons I can't seem to remember, we ordered the Chicken Adobo. Going through their menu right now, I have no clue why I chose that over the "Pastrami Thai Rice", especially when it's specifically described as "A Favorite of Meat Eaters!". At any rate, I didn't enjoy Healthy Kitchen's version of Chicken Adobo so much, mainly because it didn't taste anything like Adobo at all. Since it was predominantly Tomato and Cider vinegar based, it came closer to Afritada than it did, Adobo. Let me rephrase. It tasted EXACTLY like Chicken Afritada. I don't get why they didn't call it that in the first place. If I were to judge it as a Afritada dish It was fine, but since I can't eat tomatoes, that was P210 bucks that could've used to try something else I could actually have enjoyed.. (like the Pastrami Thai Rice. That one still bugs me). 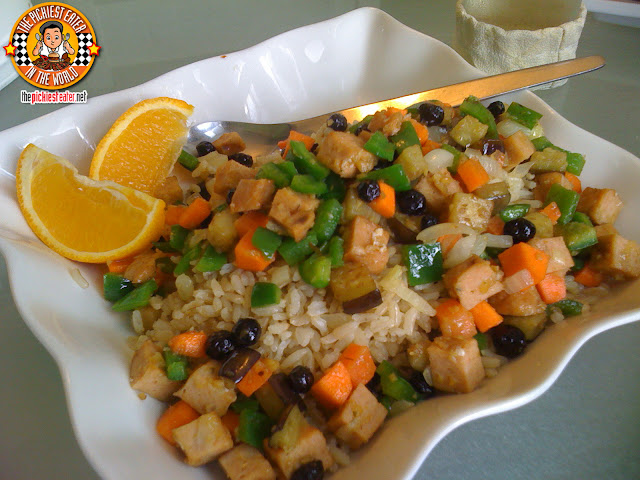 Salmon Blueberry. Two words that I never thought I' d see in the same sentence together.

Before trying Healthy Kitchen, I did a little study on it. I researched some websites and asked around a few people that had been there - and all seemed to have rave reviews about this particular dish. It's pretty hard not to be intrigued by the Salmon Blueberry Brown Rice (P320). In what would initially seem like an odd coupling of incompatible ingredients, masterfully melds itself into a symphony of flavors. I found the dish so good, I didn't even bother picking out the bell peppers and the carrots (If that's what they actually were). The tiny dried blueberries looked a bit like raisins, but definitely had the blueberry taste that brought a delicate sweetness to the dish. The best way for me to describe it would be, sort of a like a stir fry with a slight touch of fruity sweetness. 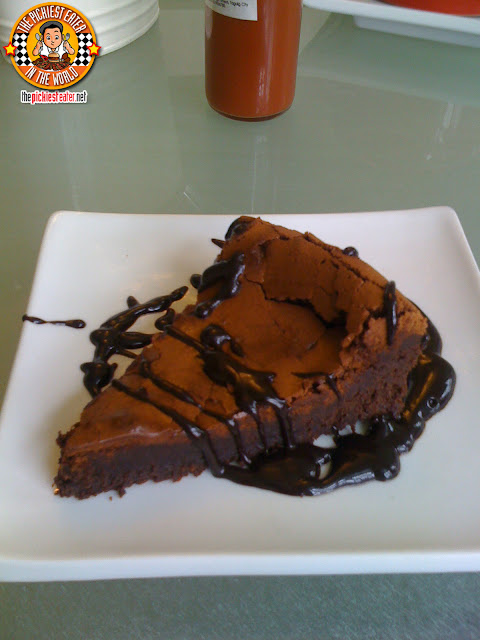 Flourless Chocolate Cake Even from afar, Rina could tell that their Flourless Chocolate Cake was going to be rather bitter. And since she's a big fan of Dark Chocolate, she knew she wouldn't be able to resist ordering this. Personally, I wasn't too big on it, but when you consider that it's a healthier alternative to your traditional Chocolate Mousse, you realize it's not so bad. It is very bitter though, and you get a different texture than the conventional cake that you get at the bake shop, with it being flourless and all. I do believe that the drizzling of the Chocolate syrup on it was totally unnecessary, making something bitter, bitterer. (Is that a word?) They should have used a low fat whipped cream instead to give it a better balance.

Would I have eaten here again? Honestly, only if I was on a diet. I'd definitely want to try the Pastrami Thai Rice. Unfortunately, as I passed by Healthy Kitchen during a Picky Eater Adventure with Rina yesterday, we found out that it was now closed - and it didn't seem to be for renovation.

Rest In Peace, Dear Healthy Kitchen. You had a good run. This was perhaps one of the few times that showed eating healthy didn't pay off in the end..

Posted by The Pickiest Eater at 3:30 PM