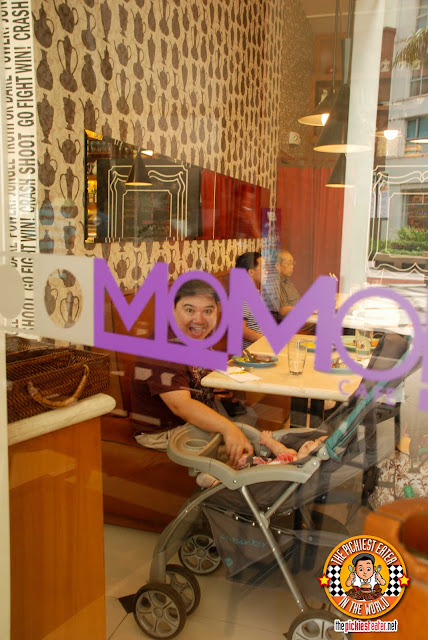 Sometime last year, our cousin Rosalyn came back from the states for a short visit and asked Rina if she could take us and the rest of the clan out for dinner. Rina was already looking to spend a day with Rosalyn, so having dinner with her was a no brainer. After finally finding a schedule wherein most of the cousins could make it, they settled on Eastwood as the meeting place, since it would be most convenient for everyone. Naturally, Rina said is everyone was asking me for suggestions on where to eat at Eastwood. I told Rina that I had been wanting to go to Momo for quite some time because I've heard some very good things about it.

Since it was a weekday and I work in Makati, you can imagine how my drive to Libis was at the height of rush hour. While I was on my hellish ride to Eastwood, Rina called me up to ask what I wanted to order, so that it would be there when I arrived. Since I was busy maneuvering through C-5 traffic, I told her, "Babe, you know me.. You'd know what I'd want to order when you see it."

I finally get to Momo and everyone had settled in. Rina tells me that she ordered me the Slow Roasted Herb U.S. Roast Beef Fingers. That would have been perfectly fine and it was definitely something that I would have ordered.. Had I not seen the dish that was listed two items just above it..


I was actually quite shocked that Rina didn't instantly think of me as soon as she read it (everyone else did), but she was just so excited to see her cousin again, that she managed to miss out that item completely.


Though I enjoyed the Beef fingers, I couldn't get the thought of the 3" Thick Bacon out of my head. I swore that it would go against every fiber of my being if I wrote a Cafe Momo post that didn't include it.


So here I am, true to my word, nearly eight months later..


Ladies and Gentlemen, this is my Momo Cafe post.


As a Pasig resident, I would frequent Eastwood a lot (but a recent debacle with their Ultra Cinema may very well change all that, but that's for another post) yet I had never tried Momo cafe. 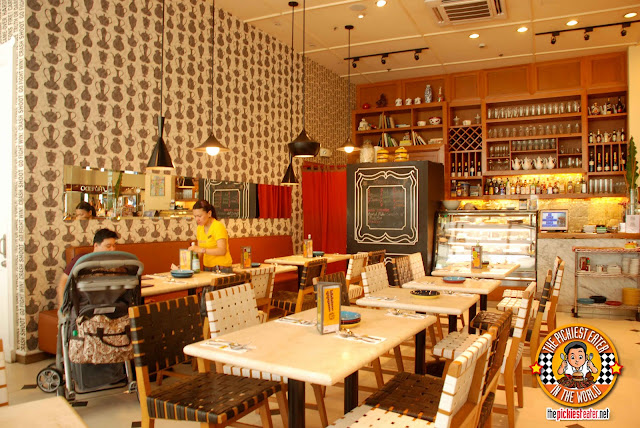 The interiors of Momo Cafe sort of reminded me of a classy, albeit dainty kitchen of someone's home. Since it's located in the ground floor of Eastwood Citywalk near the entrance it has the benefit of having two sides with glass picture windows, leaving the area bright during the daytime. 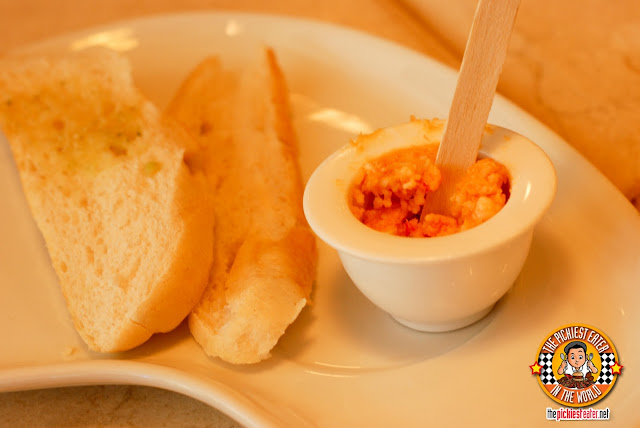 The free bread that they gave us to start the meal was rather average. I'm assuming it was supposed to be garlic bread, but only a small portion of the bread was buttered. The cheese pimiento spread on the side was also something that I've had countless times before, made by my yaya. 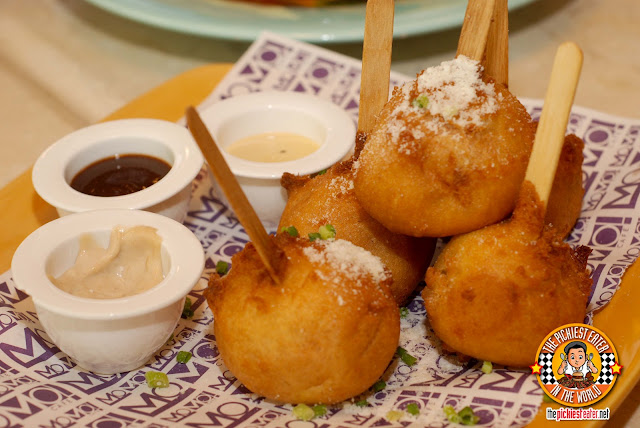 For our appetizer, we ordered the Pancake Battered Chicken and Bacon Balls On A Stick (P295). First off, I really loved the Pancake batter they used. It had a subtle sweetness mixed with a light creaminess to it, and deep fried into a perfect crisp. 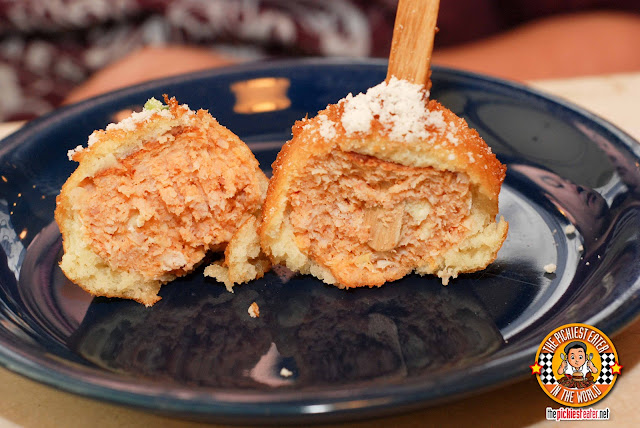 Biting into the ball revealed a meat to batter ratio that heavily favored the meat. It had a good meatiness to it, but I must admit, I was hard pressed to find the bacon flavor in it anywhere.

The dish came with three dips.. a Hickoty BBQ dip, a Cesar, and a Honey Mustard. 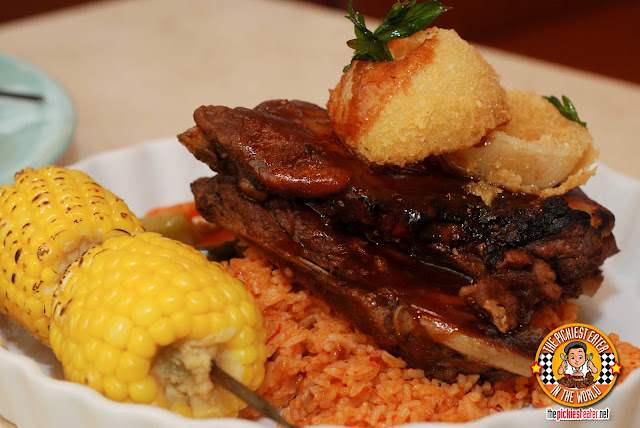 For Rina, I ordered her the Sweet and Smokey Hickory BBQ Rib-lets (P450). It was topped off with a two juicy onion rings that were fried immaculately. The ribs itself were cooked beautifully, and tore cleanly off the bone and was tender to the bite. The hickory sauce had a wonderful smokiness to it that complimented the natural flavor of the meat. The dish was laid out on a bed of what they called "Party Rice". A corn on the cob added to the BBQ feel of the plate. 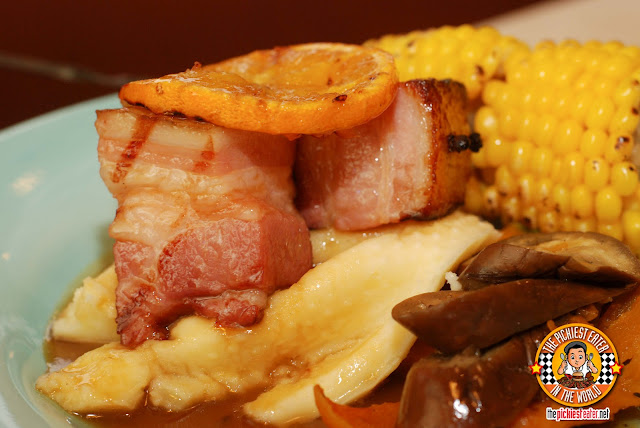 Finally, we got to the main event.. what I had been waiting months for.. The 3" Thick Sweet Glazed Double Smoked Bacon (P350). In my mind, there are four schools of bacon.. none of them wrong, all equally awesome. Thick Cut, Thin Cut, Crispy and Soft. This one was a mixture of Thick cut and soft.


Rina noted that because of its because of its thickness, it seemed a bit more like ham. With it's orange glaze brushed over its gorgeous light pink  color, she wasn't far off.


I was a little bit surprised to see it wasn't as fatty as I had imagined. But it was bacon, so by default for it was awesome. A delicate smokiness, melded with the citrus flavor of orange to make this a wonderful dish.. one definitely worth the wait!! 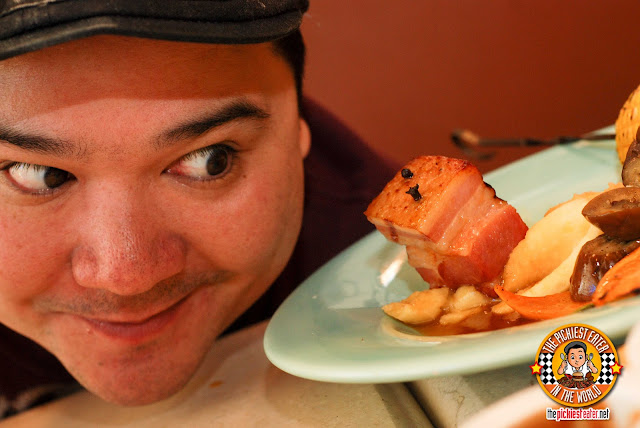 We finally meet! (I love you)

Perhaps the only thing I can say about it is that I think the portioning was a little bit too small for me, and though they said it was "For sharing", I don't see how that would be possible for me to do that without getting into a fistfight.

The dish came on a bed of Mashed potatoes, Corn on the cob and some weird ass vegetables. 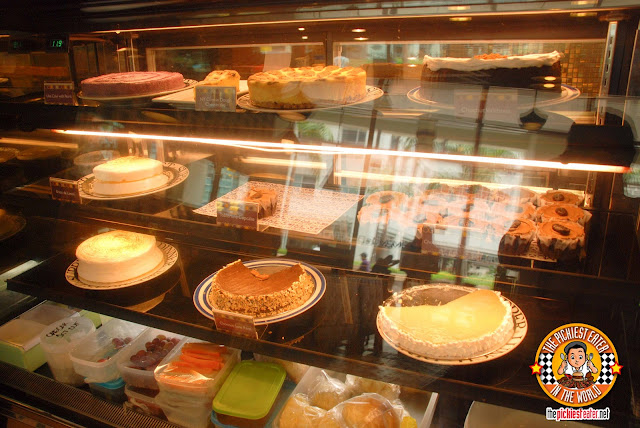 Momo also offers an assortment of desserts to choose from.
But we were too stuffed to order anything

OTHER STUFF RINA AND FAMILY ORDERED DURING OUR FIRST TRIP

While I was on my drive to Eastwood,
Rina and company were feasting on this! 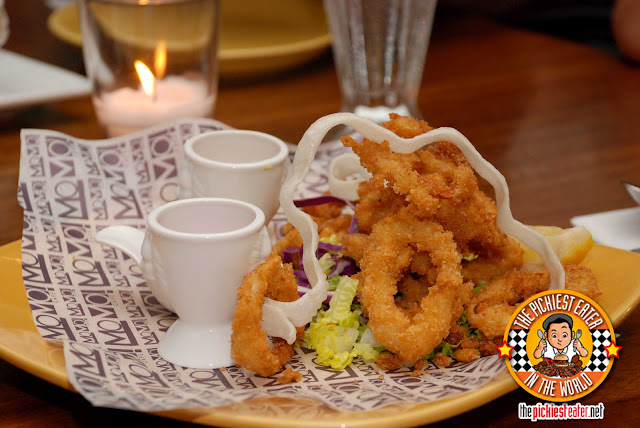 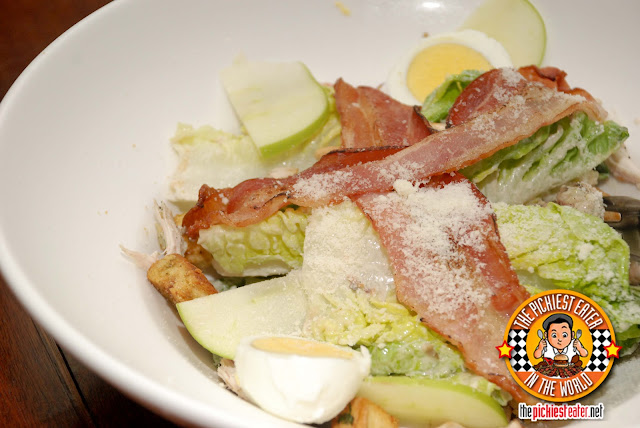 Someone ordered this salad..
I Didn't get its name, but it gets plus points for using strips of bacon in it 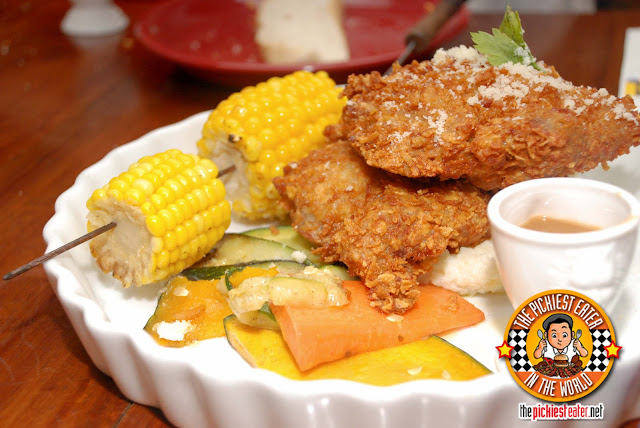 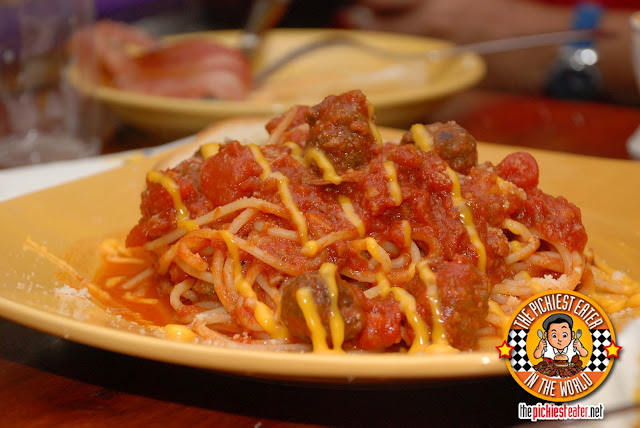 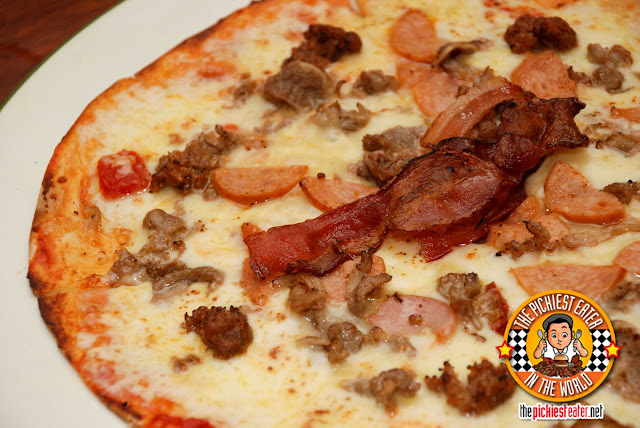 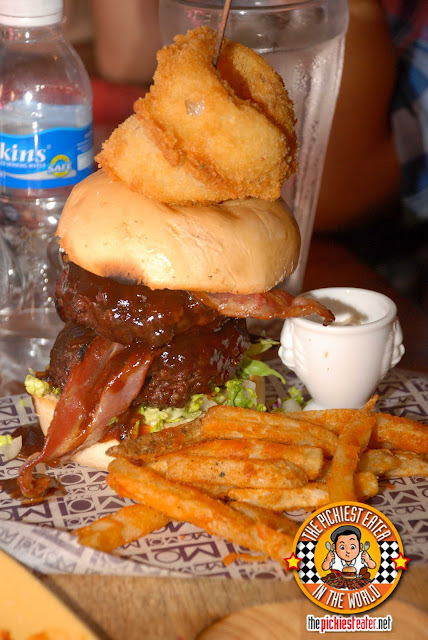 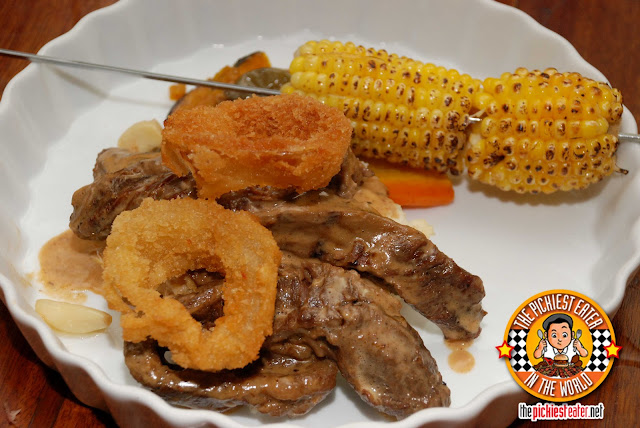 Oh yeah I almost forgot! The dish I ordered the first time I was there.. The Slow Roasted Herb U.S. Roast Beef Fingers (also known to me as 'The dish that was not bacon"). It actually was pretty good, with the slow roasting making the beef unbelievably tender. flavor-wise though, it was similar to a Beef Stroganoff that I've had before.. Nothing really mind blowing and definitely not something I wouldn't wait 30 minutes for. 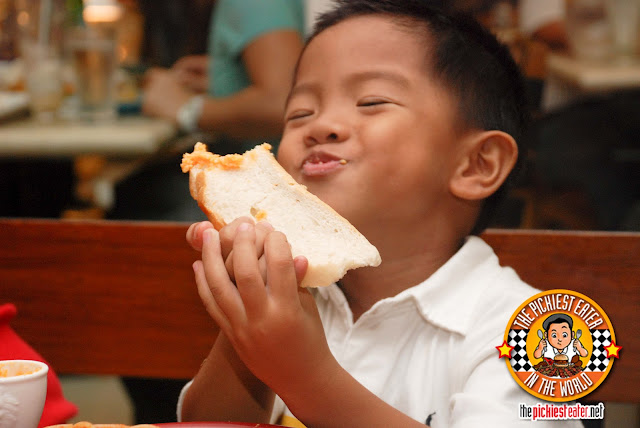 My Godson Antoine seemed to love the cheese pimiento bread! 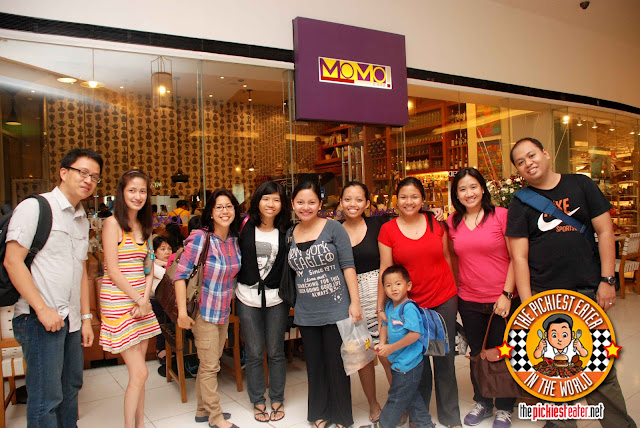 Rina, with cousins Rosalyn, Nina, Sister Chaikka, Cousins Nikka,
(with my godson Antoine) Aouie and Conci
Two of Rosalyn's friends on the left

MOMO CAFE is located at the ground floor of Eastwood Citywalk
and Ayala Triangle Gardens
Posted by The Pickiest Eater at 12:28 AM