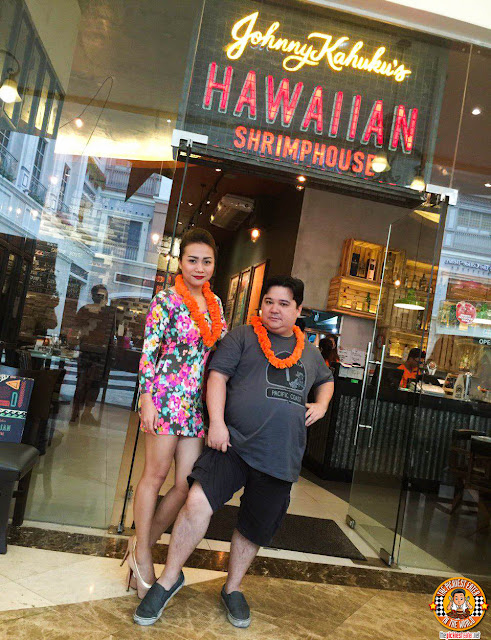 I'm not sure if I ever mentioned this before, but I lived in Hawaii for a year when I was a child, and was fortunate to go back there in 1998. It truly is one of the most magical places on Earth. I distinctly remember going down from the plane and being greeted by an incredibly beautiful woman in a coconut shell bra and a grass skirt, before she placed a necklace made of flowers around my neck. (You can imagine how excited I was to tell all my friends that "I got Lei'd when I was in Hawaii!")

However, something that I regret not really being able to do in Hawaii, was go on a food trip. In 1998, I was a 21 year old warm blooded male with only one thing on my mind, and I can assure you it wasn't the food. In fact, aside from Denny's, Zippy's and Tony Roma's, I can't think of where else we ate at during our week long stay there.

Though Johnny Kahuku's isn't a Hawaiian brand name, it does its best to bring the feel of the Polynesian paradise into our shores. And boy did we have a phenomenal time exploring their menu!


Johnny Kahuku's Hawaiian Shrimp House is the brainchild of Chef Pete Ayson of Red Crab fame, wherein he takes the rich flavors of the tropics and gives it his own eclectic spin. 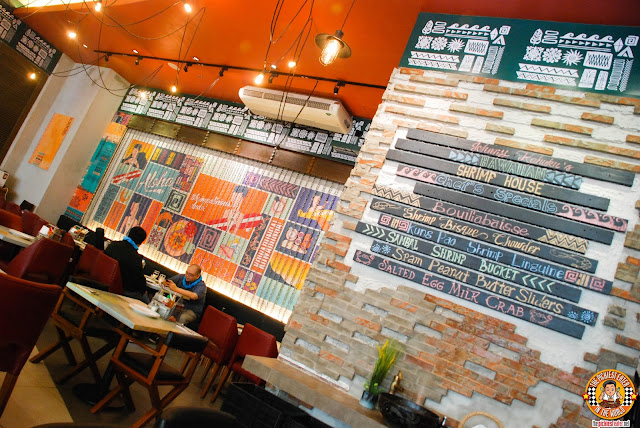 The vibe of the restaurant invokes the fun, yet laid back atmosphere you would expect in a popular surfing hangout on Waikiki Beach. Though there may not have been a girl in a grass skirt to greet us, we were instead warmly received by one hell of a sexy lady (in a stunning floral dress that almost seemed painted on her), named "Chai".

Chai and the rest of crew of Johnny Kahuku's made sure that our lunch experience was going to be an awesome one! 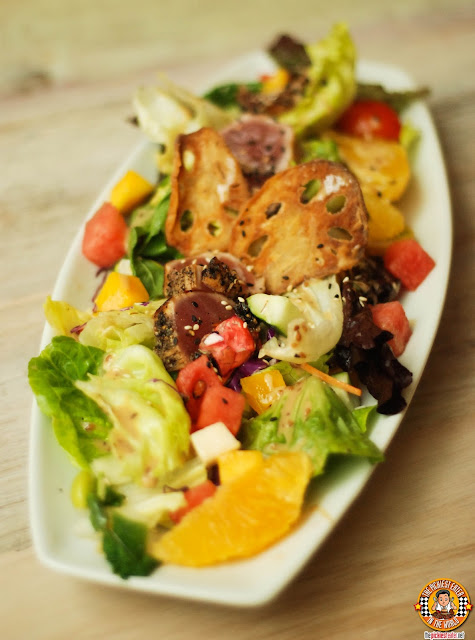 Our meal began with the Tropical Tuna Salad (P 395), which is a refreshing mix of greens, watermelon, edamame, and other assorted fruits. The salad is then drizzled in a Sesame Miso Dressing, then topped with seared Ahi Tuna.

Being the loving husband I am, I gave my share to Rina. 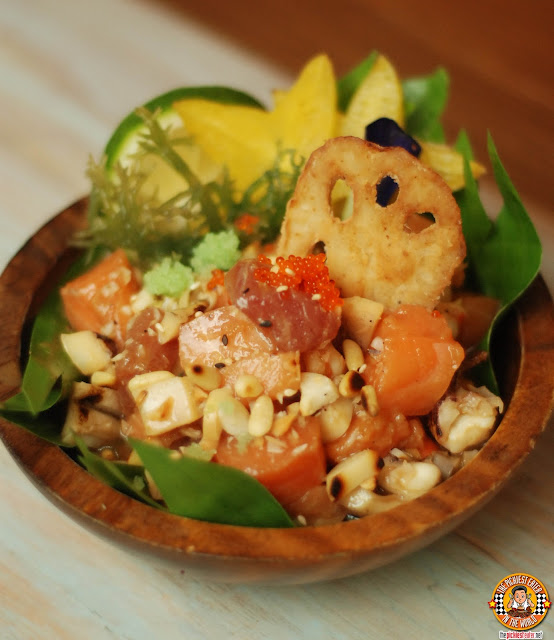 Our meal began with the Special Seafood Poke (P315), a raw salad that was made with seared blackened tuna, salmon sashimi, seaweed and roasted pineapple in ginger shoyu dressing. I'm not too big on raw seafood so I skipped this, although my friends seemed to like it. 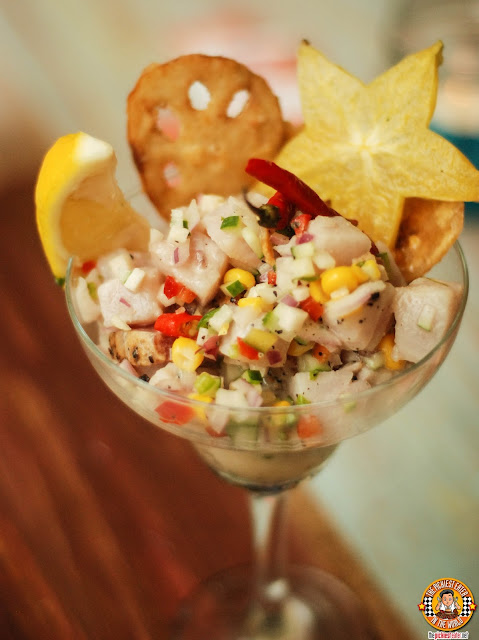 Again, not my thing (Picky Eater, sorry), so I didn't try it, but again, my friends raved about the vibrant flavors. 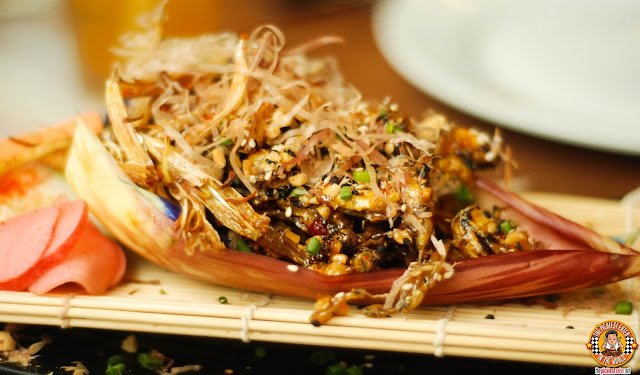 I was rather intrigued by the Asian Crispy Squid, primarily because I don't eat squid but seemed to really enjoy this. A fried baby squid in caramel tamarind glaze, sprinkled with mixed with crispy dilis and peanut adobo. It was actually the Crispy Dilis which seemed to be coated in a honey glaze or something that I found remarkably addicting. 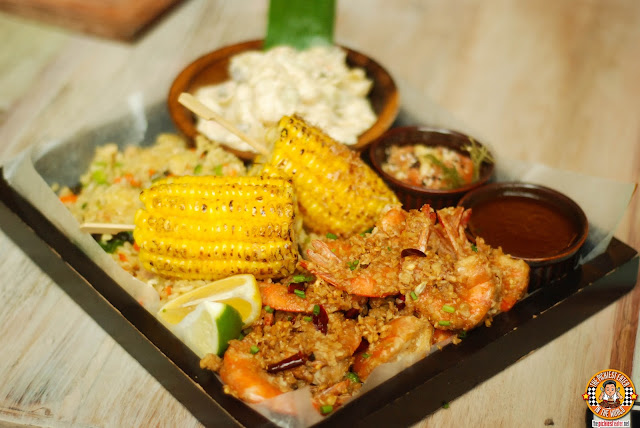 Chef Pete kicked things up a notch with his "Shrimp Truck" menu, particularly the Classic Kahuku Shrimp Truck (P 535-6pcs shrimps/P 599-9 pcs shrimps),  The Classic Platter consists of plump Shrimps, drowned in Garlic Butter, and served with a side of Hawaiian rice, Grilled Corn-On-The-Cob, one of the most delicious Macaroni Salads you'll ever try, and a side of Tuna Ahi Poke. 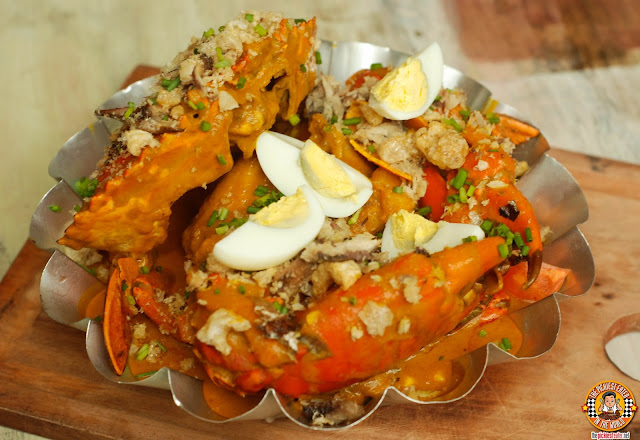 Given his culinary pedigree, it comes to no surprise that Chef Pete worked wonders with Crab, creating his own twist to the Classic Pinoy Favorite, the Crab Palabok. A bed of Soft Rice Noodles topped with boiled eggs, toasted garlic, smoked fish and crumbled Chicharon. The dish is then topped with Fried Crab, slathered in a thick Shrimp Palabok Sauce. 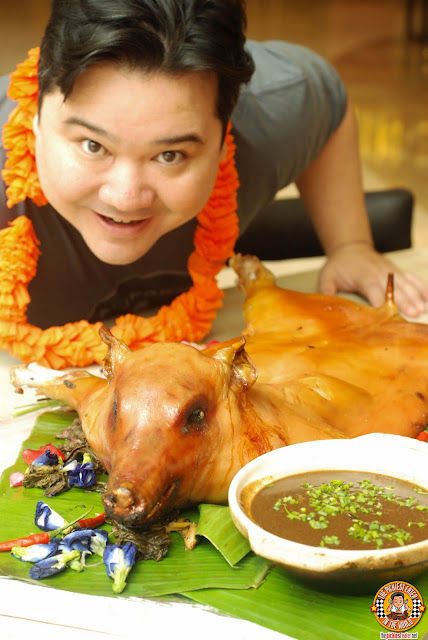 Being that we were in a "Shrimp House", I know I shouldn't be surprised that the entrees served, were conspicuously missing any form of mammals. Which is why I almost did a triple back flip when they brought out this bad boy right here. 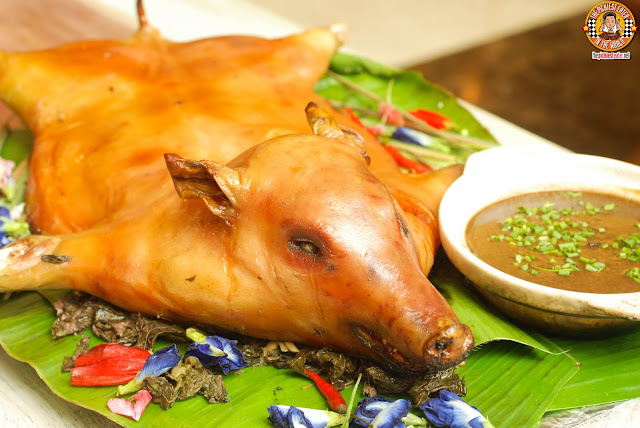 Chef Pete wowed us by bringing out a succulent Cochinillo- A four week old suckling pig, which he basted with coconut in order to give it a nice tropical spin. 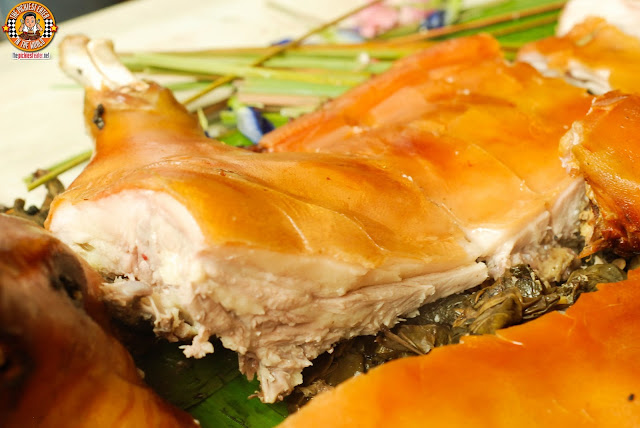 The skin let out a nice crack with every bite, and the meat was incredibly juicy and flavorful, especially since it was garnished with lemongrass, chili and edible flowers. 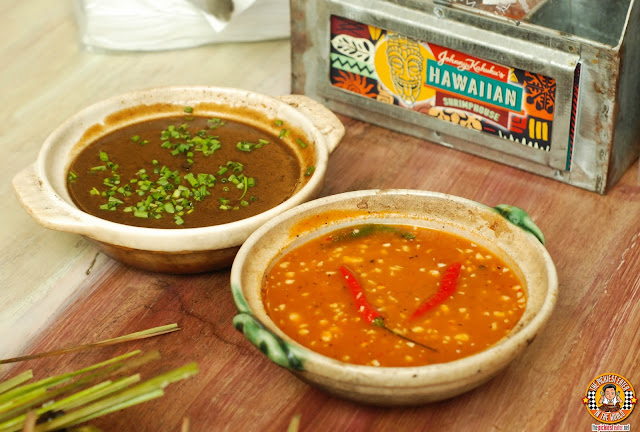 The Cochinillo is also served with the chef's special pineapple-liver sauce and two-week aged sili-tuba blend. (Advance Notice is required) 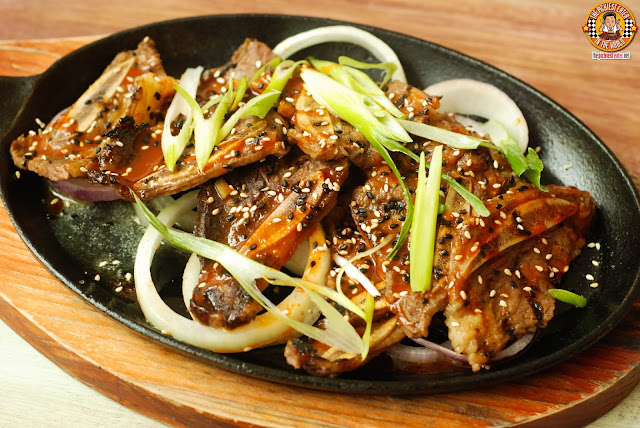 The L.A. Kalbi Beef Ribs (P 495) was perhaps the highlight of the entire feast.. which, need I remind you, included a roasted baby pig. Grilled cross-cut US Angus beef short ribs, peppered with juicy grilled onions, doused in a sweet and Spicy Kalbi sauce, and sprinkled with sesame seeds. This is a dish I could easily wipe out all by myself. After a heavy meal, Chef Pete decided to slow things down to a cool, Tropical Chill- which is his chilled and hand-selected platter of pineapple, and other assorted fruits, given added vibrance by gentle sprinkling of assorted salts. 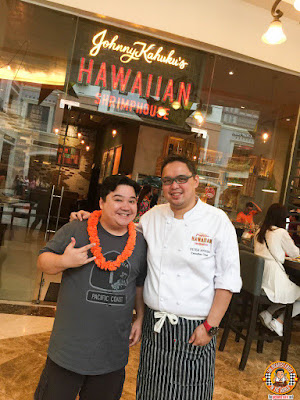 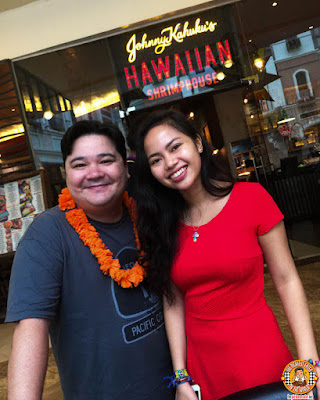 Not only did I finally get to meet Chef Pete Ayson in person, but I was able to enjoy some of the amazing dishes that he prepared for us himself! Thank you to the lovely Bea for taking such great care of us!

Looking forward to going to Johnny Kahuku's Eastwood (Much nearer to my house) to try some more of the meat dishes next time! 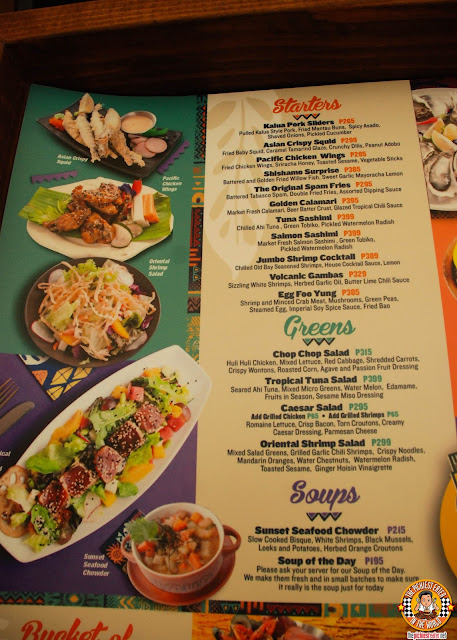 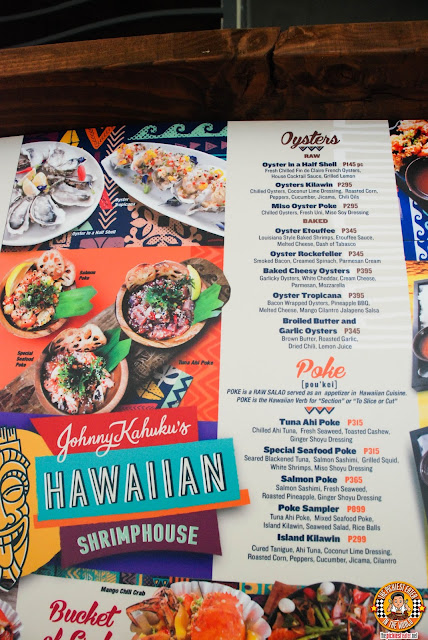 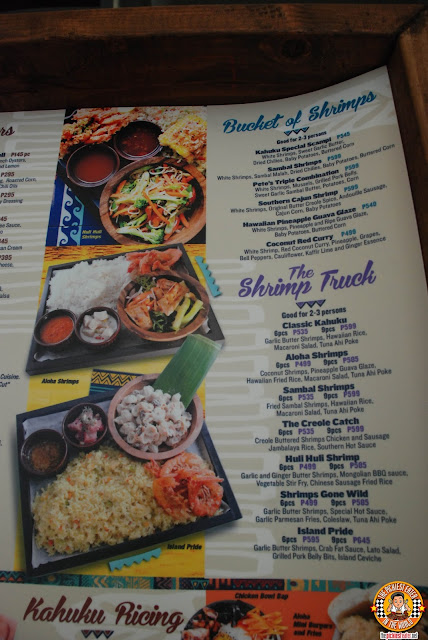 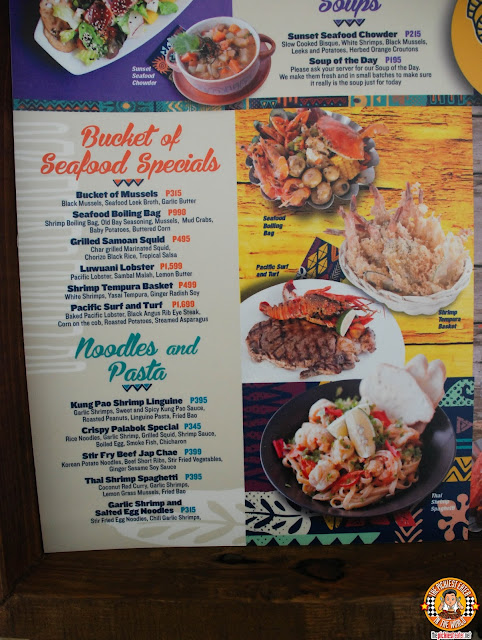 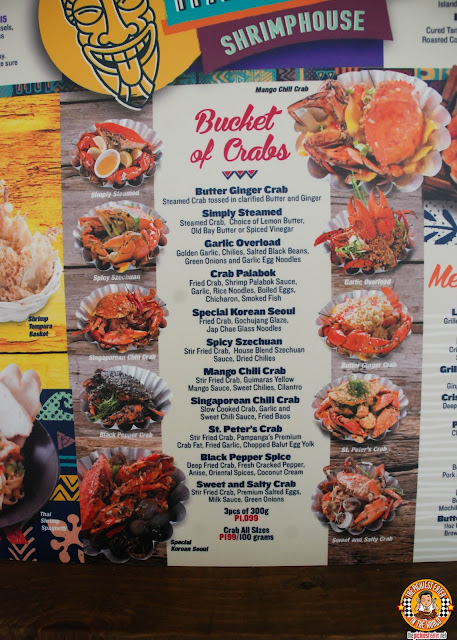 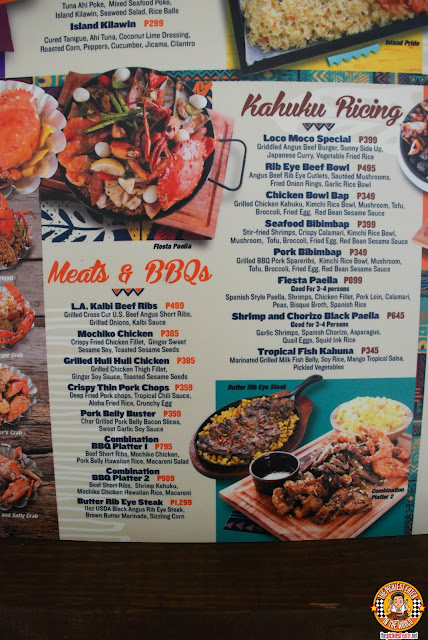 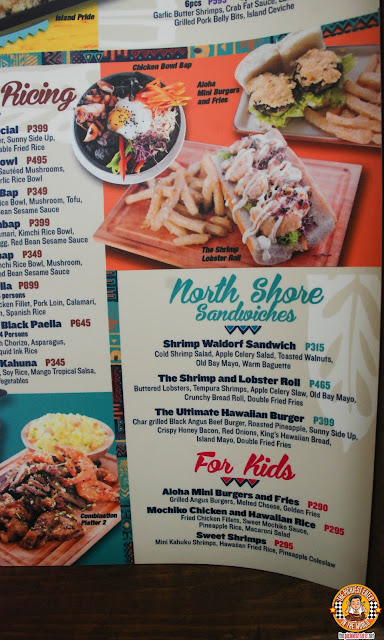 Posted by The Pickiest Eater at 12:14 AM

Email ThisBlogThis!Share to TwitterShare to FacebookShare to Pinterest
Labels: Johnny Kahuku's Shrimp House, Where to eat at Resorts World Manila