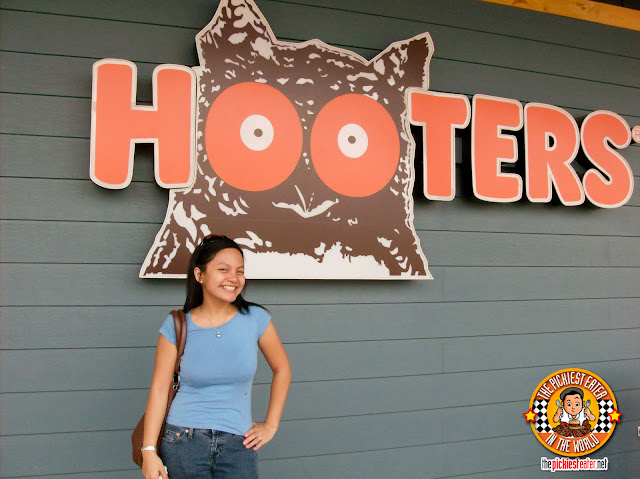 My very own Hooters girl.. I need to get her one of them shirts..

I went to Hooters in Baltimore during my 1998 summer vacation with my cousins Raffy and Paolo. Being the kind of guy that.. umm.. how do you say it.. is constantly being accused of being fascinated by certain "assets" of a woman, my trip to Hooters was pretty much tantamount to a trip to Disneyland. Think about it.. Burgers and Boobs? What's not to love?

You see, that's the whole selling point of Hooters. You can get grilled burgers anywhere. But how often do you get a really hot girl in skimpy orange shorts and a tight tank top that emphasizes her huge rack to serve it to you? I'm not sure if it's because of the time that has gone by that has blurred my memory, but i don't remember what I ordered and if I enjoyed my food during our trip there in '98. All i remember was that our waitress sat down with us to chat while we ate - and gawd dang she was hot.

With that build up alone, you can understand why I was very disappointed with my experience here in Hooters Manila. 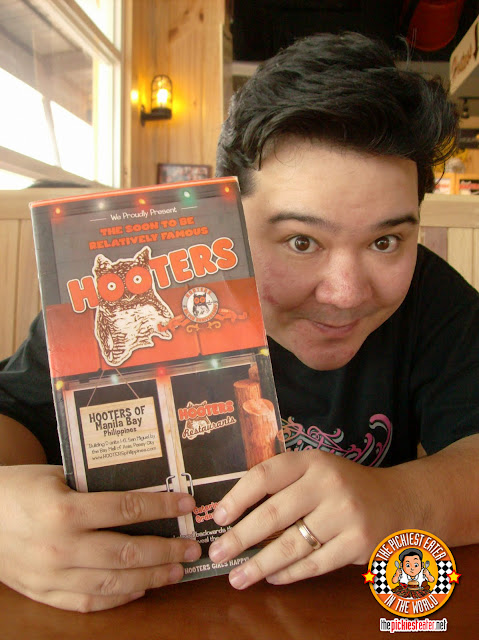 Ok, I'll talk about the girls later. The first thing you need to know about Hooters Manila is that it's not in Mall of Asia. I'm telling you this as a fat man who hates walking in the sun. Yes, there's an access bridge that helps you get to "San Miguel By The Bay", (an arcade of restaurants at the back end of Mall Of Asia), but it's still quite a walk, with Hooters being at the far end. Obviously I'm not going to be joining a marathon anytime soon, but just so no one has to go through what I went through, I'm offering you this helpful tidbit - something i wish, someone had done for me before I parked in the main complex and went blindly searching for the restaurant all around Mall Of Asia.. and anyone who's been to MOA, knows that that's similar to finding a needle in a haystack.

First of all, i loved the ambiance of the place. it had that nice tavern feel that made Hooters a place where guys could feel right at home. The design and decor of the place was true to the great Hooters tradition, so kudos to them on that. Even the menu, that featured the history of Hooters, was an interesting read.

The price, however, is on the steeper side. Imagine Chili's & Fridays price range, where you add around P50 to P75 bucks or so more on certain dishes. Given the fact that we're not exactly millionaires, Rina and I had to spend wisely. 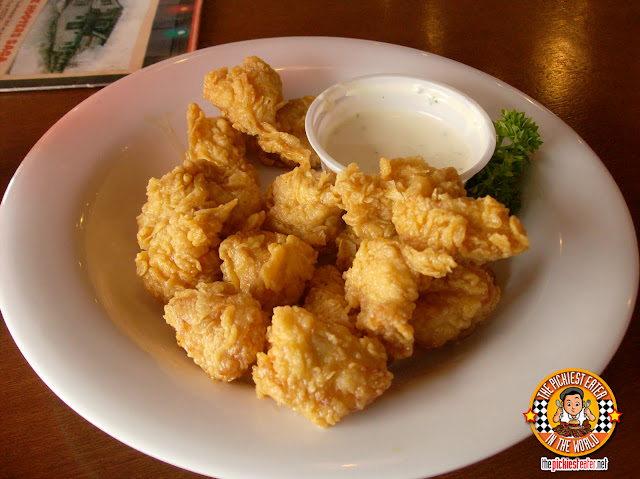 No trip to Hooters could be complete without trying their Chicken Wings. It even says so in their menu. I've never liked the taste of Buffalo wings though, and I abhor the taste of bleu cheese, so Rina and i decided to go with the Boneless Chicken Wings (P275) as our weapon of choice. It was pretty darn good, with it's crunchy on the outside and soft on the inside taste that blended well with the ranch dressing. I'd definitely order this again as an appetizer or, excuse me, "Hooterstizers", even though it's not listed as an actual appetizer. 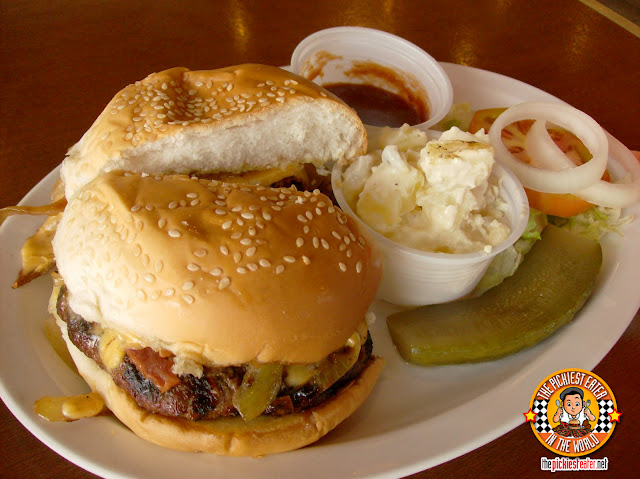 As Rina correctly guessed within seconds of reviewing the menu, I ordered the Western BBQ Burger (P375). A burger with American cheese, crispy onion tanglers, Bacon and BBQ Sauce has "RichieZ" written all over it. The burger patty was nice and juicy, while the onions were really nicely fried, giving a nice sweet balance between it and the tangy BBQ sauce. They put some extra sauce on the side in case you needed more, which was actually a good touch to it. My only qualm? It doesn't come with french fries. An American themed joint that serves burgers without a side of french fries is sacrilege to everything the United States of America stands for. Instead, they give you a side of tasteless potato salad. And when i say tasteless, i mean it. It's almost like i should've eaten air instead. At least i could've gotten that for free, and it would've been less fattening. 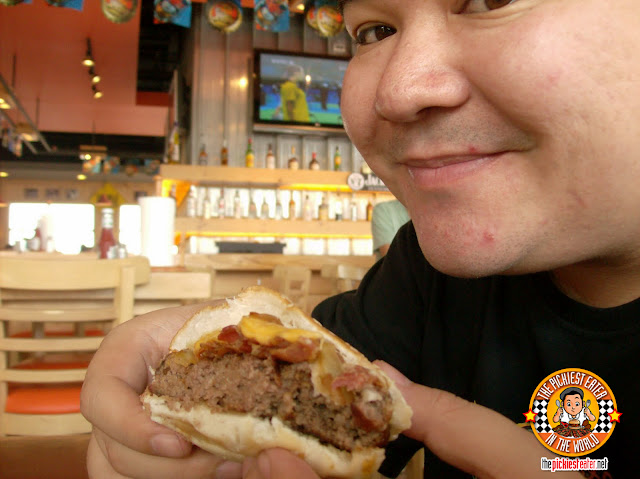 Geeze, with all my zits, my face is actually starting to look like the burger 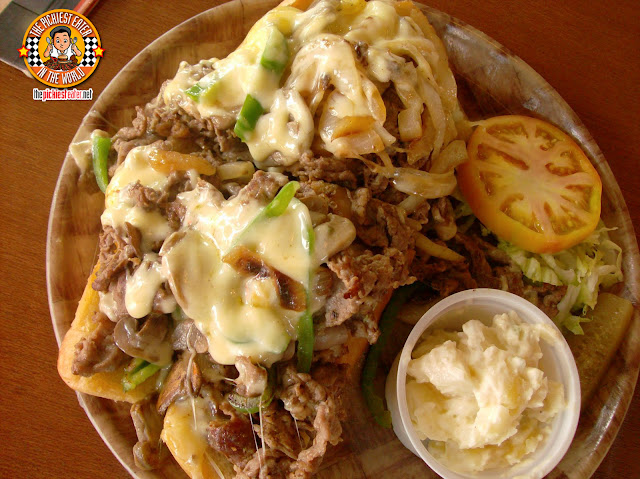 Rina got the Philly Cheese Steak (P495), and she (as was I), was very much disappointed. The problem began with the dry bun - the kind that seemed to break apart when you bite into it. Almost as if it was frozen just minutes before they slapped it on the grill. The gummy beef strips didn't help the cause much either, because it was also very dry and a bit salty for me (it was fine for Rina, who's notorious for her love of salty food). The only saving grace was the richness of the melted cheese - but that's not saying much. If you put cheese on my shoes, it would probably make it taste better - but i still wouldn't eat it. And for that price, i expected so much more. Again, they substituted the fries with the Potato Salad, which ultimately gave the dish a big fat F. 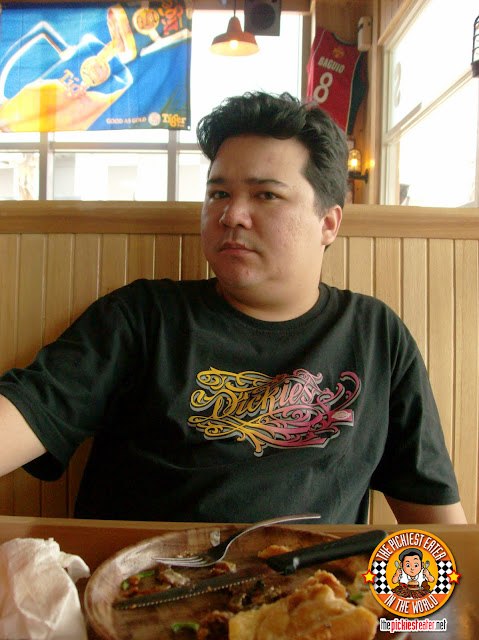 The look on my face says it all.. Where are the babes?

The most disappointing part of my Hooters experience was the women.. or the lack thereof. Don't get me wrong, I'm not a manyak or anything like that (no comments, please) but the hot babes in the Hooters uniforms are the essence of the whole Hooters experience! There were none, at least not to my standards, that would fall under the category of "Hot'. I was tempted to buy Rina the shirt and have her show her all those Uggoes how it's done, but of course I thought it was best to save that for our own private time hehe. There was one that Rina felt was the prettiest one, and had her picture taken with her. 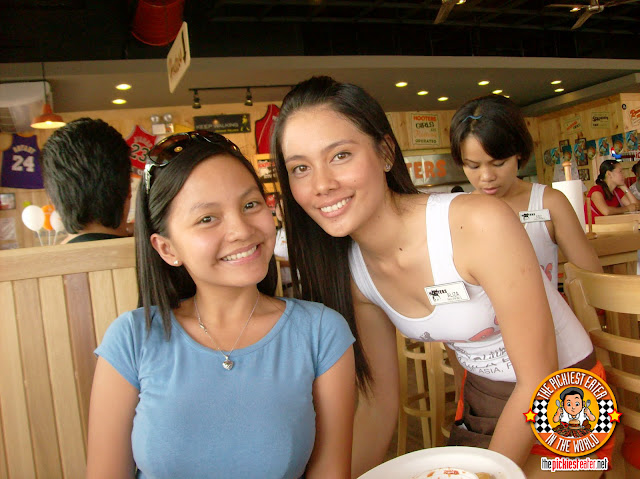 Seriously, isn't that a young Aling Dionesia behind them?

A bit too scrawny for my type, but yeah, i guess she was the prettiest one there. But if you look at the girl behind her, doesn't she kind of look like a freshly shaven Manny Pacquiao!?!? I can only imagine that's what Aling Dionesia looked like in her teen years, and i was supposed to find that hot? I'm guessing they're trying to capture the foreigner market, so they're making do with more "exotic" looking waitresses.

At the end of the day though, I would go back to Hooters, because in spite of some disappointments, namely the women and the cheese steak, it was a rather fun and enjoyable dining experience. I just hope they do something about the fries! (I still can't get over that)

Posted by The Pickiest Eater at 11:19 AM