A TASTE OF BUENISIMO

The First official post of the new adventures of The Pickiest Eater In The World, with Photography by RinaZ! See the difference! (Maybe next time I can find a way to do this in 3D hehe) 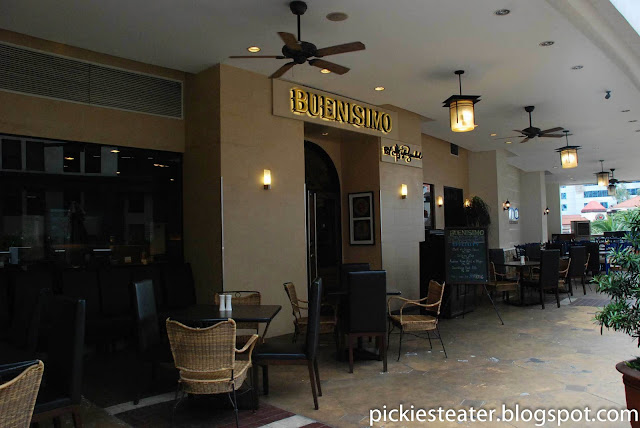 By Cafe Ysabel.. so you know they know their stuff.


Given my love for food, it's quite normal for friends to go up to me with suggestions for places to eat. My good buddy Joel, or "My Giant" as I more lovingly call him because he's a foot taller than me, (Meaning he's freakishly tall.. not that I'm, you know.. ridiculously short.. OK, fine. it's a combination of both. Happy now?) never fails to mention Buenisimo whenever we talk about food. (Of course he called it "Bellisimo", which turned out to be a totally different restaurant) He raved about their awesome food, generous portioning and the reasonable prices, saying it was a favorite of his daughter Gwen. The last time we went to a restaurant that was one of Gwen's favorites, the said restaurant ended up becoming an instant favorite of our group as well (I don't want to mention the name for future post purposes), so hearing his daughter's stamp of approval, immediately piqued my interest.

Not that little Gwen (As of writing she's not yet taller than me, but who knows what'll happen by next week) is some "Paul the Octopus" of food, but that's just how pleased with the first restaurant that got her endorsement. So one fine Saturday morning, Rina and I headed off once again to Eastwood (Which has apparently become one of our favorite malls, based on the number of posts in the past and coming up) to find Buenisimo. Rina was excited more than usual because, as mentioned earlier, this would be her first Official Pickiest Eater "assignment".

Buenisimo is located at the second floor of Eastwood's new building. At moment the location isn't exactly ideal, because it doesn't exactly receive much food traffic yet, because its at the side of the building that at the moment, leads to a dead end. That'll all change when the bridge from the old building to the new, opens up, but for now, the place looks awfully quiet from the outside. Of course we arrived around 11:30 or so as has become the standard for us. (I always try to make it a point to avoid the lunch rush, just so I get the feel of how long it takes them to bring out a dish without any pressure)

From the exterior, Buenisimo looks like a ultra upscale restaurant. Very clean and classy. It almost made me want to call Joel again just to check if he was SURE it was Buenisimo that had the reasonable rates he was talking about. Thankfully, they had a chalkboard that displayed some of their dishes that had prices that hovered around the P300++ range, so I knew we were good. 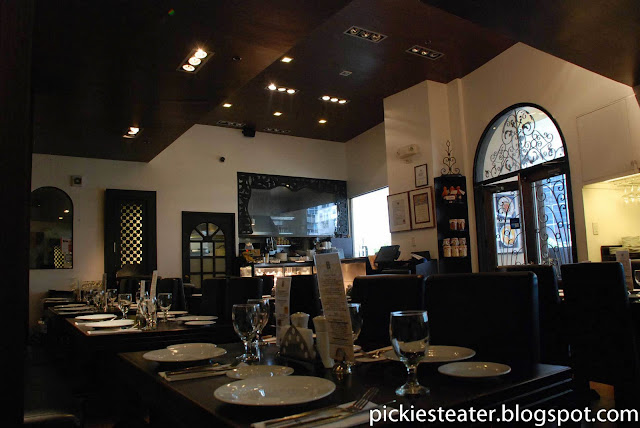 I felt like I had to speak to the waiter in a British accent when I got inside.
Rina didn't allow me though. :(


The interiors were had a modern-Spanish vibe that exuded sophistication, but at the same time, a bit of stiffness. As beautiful as it was, you almost felt like you had to talk in whispers to one another.. even though we were the only ones in the restaurant.The waiter assigned to us was very well spoken and exquisitely trained in the art of serving, something that came to no surprise to me especially when you take into consideration that Buenisimo was conceptualized by the creators of the renowned Cafe Ysabel.

After a short debate with Rina on what to order, we went on our way to try our first Buenisimo experience.

After Rina and I finally settled on our orders for the main course, we were considering ordering some appetizers. The waiter said that our orders were of large portions, and an additional order might be a little too much, especially considering he was going to bringing out the free bread. I thought that was nice touch, because any other waiter wouldn't have bothered and would just be happy to make a sale. This gave me the impression that the staff of Buenisimo actually care about their customers. (love you too, pare). And the funny thing about it, was he was right on the money. 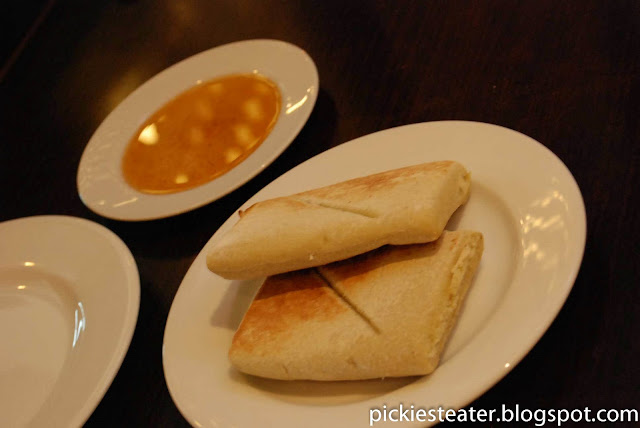 The Buenisimo Bread.
Was thisclose to making it to the Best Thing Ever list.

Our Buenisimo experience kicked off to a great start with the Ciabatta bread and Balsamic vinegar / olive oil mix, similar to that of Italianni's. The only thing though, unlike Italianni's, The bottles of Vinegar and olive oil aren't separated and you make your own blend. Instead, the mix is already bottled up - to perfection. You can't leave it on the table though, but it is readily available upon request, with the waiter pouring it out to your plate. The waiter knew exactly what he was talking about when he suggested just having the bread for the appetizer, because this was excellent. You rip open the bread and the steam from the inside comes out. The inside of the bread is soft and hot, and when dipped into the oil mix, I was left speechless. (Well, not exactly. I did take a look at Rina's bread and ask "you gonna eat that? She said "yes", as she pulled her plate closer towards her with a suspicious eye on me.) The light sour taste of the vinegar is balanced by the richness of the olive oil, and when you dip it into the hot bread, Fuggedabowtit! (Oops.. wrong country?)
ENTREES

With the success of the bread, I was really hoping ecstatic to try their main courses. And things were looking pretty good as they placed the first dish in front of Rina and I. I mean, let's face it, who wouldn't be impressed with something that looked like this: 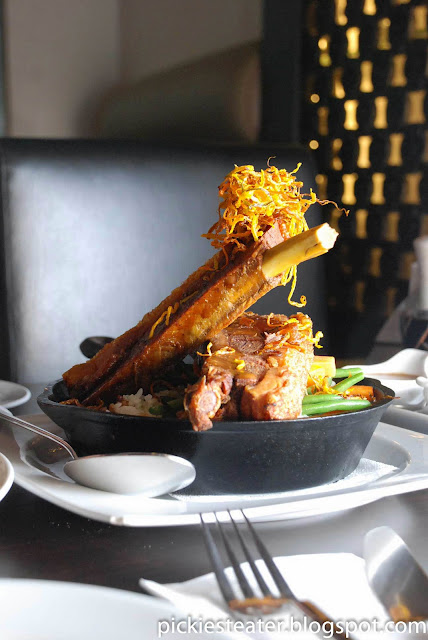 Beautiful shot by Rina.
Looks like what they serve in the cafeteria at Heaven. hehe

The Crackling Ribs (P370) was an impressive sight to behold. Two large slabs of Bone-In Pork Bellies on a bed of buttered vegetables and herbed fried rice. Sounds awesome, right? Unfortunately, there were some problems to it. The first being the "pan" it was laid in. Yes, the waiter warns you "hot plate" when he places the order down on your table, but there's a difference between a hot plate and a plasma hot pan handle. After waiting a few minutes for it to cool down, Rina and I were having a conversation, and I totally forgot about the hot plate thing. So you can imagine how eager I was to get started. I grabbed the handle to pull the pan closer to me, and BAM, it slightly burnt my hand. Nothing serious or anything like that, but it occurred to me that if it were a child, the ramifications could've been much greater.The least they could have done was wrap a cloth panhandle to it. It really was THAT hot. 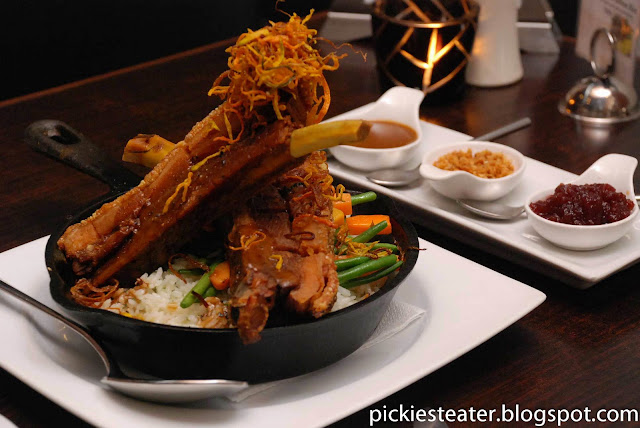 The Ribs need a little help from the condiments.

Despite its flamboyant presentation, on it's own, the Crackling Ribs weren't anything spectacular Flavor-wise. To be honest, I found it to be rather bland. They give you three type of condiments to eat it with. I think it was cranberry jam, garlic bits, and gravy. None of them really helped bring out the flavor of the meat though. Because it was "crackling", it was perfectly understandable that the ribs had to be deep fried. But their deep frying of the ribs left it a tad bit dry and virtually tasteless, not even the varying tastes of the condiments could help it. But to be fair, the menu did say it was "crackling", and it was exactly that - except lacking a bit of seasoning. Maybe they thought that if they prepared it any other way than this, we would be complaining that it wasn't "crackling" enough. In other words, I should've ordered something else. 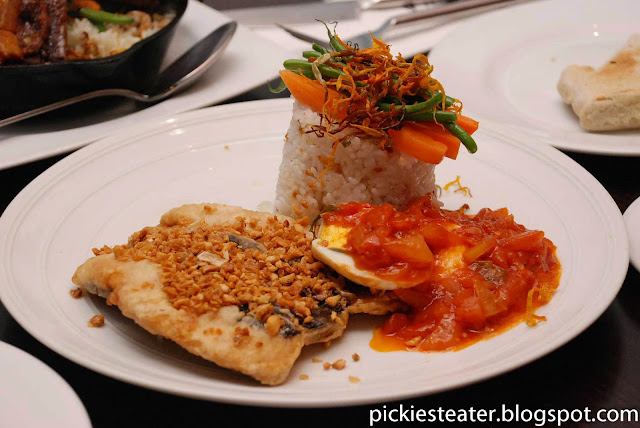 That doesn't look ala Pobre to me.


Rina's Bangus ala Pobre was also a bit of disappointment for us. It was basically a tons of garlic spread over a piece of Bangus Belly. (not the other way around) Instead of the more traditional style of Ala Pobre.. the one with olive oil, soy sauce and onions (which I believe was what Rina was hoping for),  all they had was a tomato coulis on the side, with a hard boiled egg drowned underneath. Again, the fish wasn't anything that would blow your mind away. (I'm just curious though.. If you're going to make a dish that's nothing like "Ala pobre", why bother calling it that?)

I guess we should've ordered something else.

In a classic case of style before substance, we left Buenisimo with lots of leftovers (Luckily for us, the bread really filled us up). Sure, the food was pretty to look at, but unfortuntely for them, I eat with my mouth, not my eyes.

The next Monday when I saw Joel, he was flabbergasted that I didn't enjoy Buenisimo. "Did you try the salad? The portions are huge!", he excited said. He the look on my face, realized who he was talking to and said, "Oh yeah, right." (Salad?? That gave me the inkling that maybe Buenisimo was more Daddy Joel's favorite restaurant than it was actually Little Gwen's? hehe)

If I ever go back, perhaps I'll get the Glazed Ribs instead of the cracking one, and the Russian Fish and Chips instead of the Bangus ala Pobre. But at the moment, it's not on my list of priorities.

Maybe my visit was a fluke. I mean, it's hard to bet against someone of the caliber of Chef Gene Gonzales, right? Gold star to Buenisimo for Service and Presentation, but sadly, they fell slightly short on taste. Until I come back, to me, the place is closer to being just  "Bien" than it is, "Buenisimo".


(My Spanish isn't very good. Did that actually make any sense?)