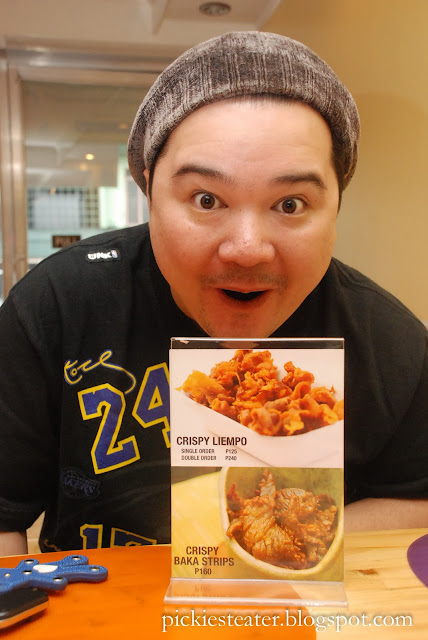 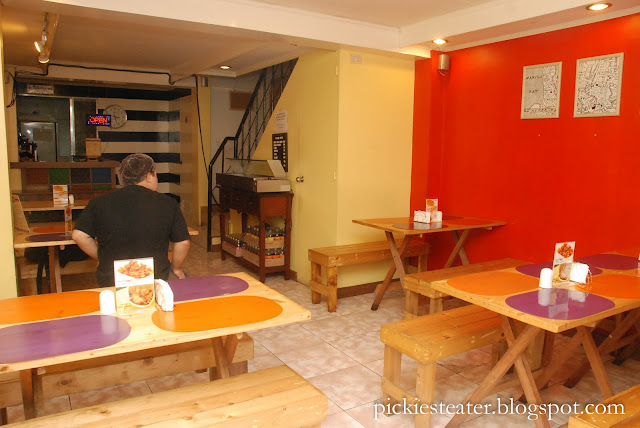 I find comfort in all types of food. So I was a bit clueless with what the term "Comfort Food" exactly means. Regardless, Rina was ecstatic to be going there so I'm guessing PenPen must really be doing something right. You know what sucks though? I used to live in the QC area, and I guarantee you, there weren't that many places to eat back then. (Well, maybe there were, but I was still a student so I couldn't afford to eat there on my own).


PenPen's is just a small comfy place in one of the side streets of the busy Morato Area (Scout Castor To be exact. And you know what sucks? If you go down the road, as in no turns or anything like that, it will lead you to the house I used to live in!). The place isn't going to be featured in any Interior design magazines anytime soon, but it's not trying to be anything more than it is, which is exactly what makes the place so charming.


I've actually been there only once. I first tried it because a friend of mine from work brought me some take out before because when she saw the dish, she said "It was so me". What was it? Crispy Liempo - Deep fried pork belly strips sliced so thin.. it looks like.. Yup, you guessed it - Bacon. So naturally, I had to go back. 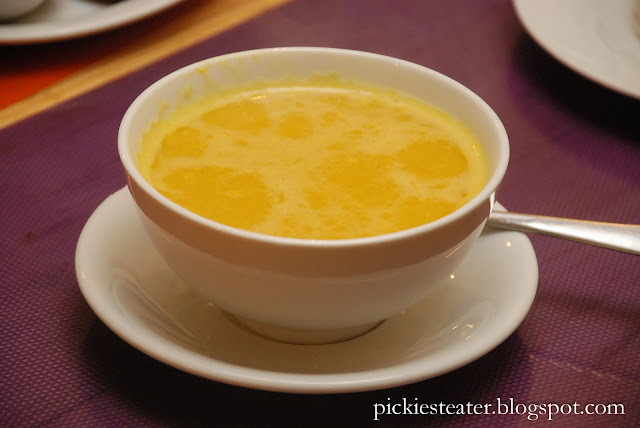 Being a sucker for Pumpkin/Squash soup, i couldn't resist ordering their Creamy Garlic Kalabasa Soup (P60) - And I'm glad I did. The blend of the Squash and garlic was amazing. The texture of the soup wasn't too thick so it didn't come off as too heavy. Every sip had a garlic-laced kick to it that seemed to get better and better the more you ate. And for the price, the serving was rather generous. I was tempted to take up their offer of having it with some Pan De Sal and Kesong Puti for an extra P35 bucks but I decided not to - especially given what I ordered. 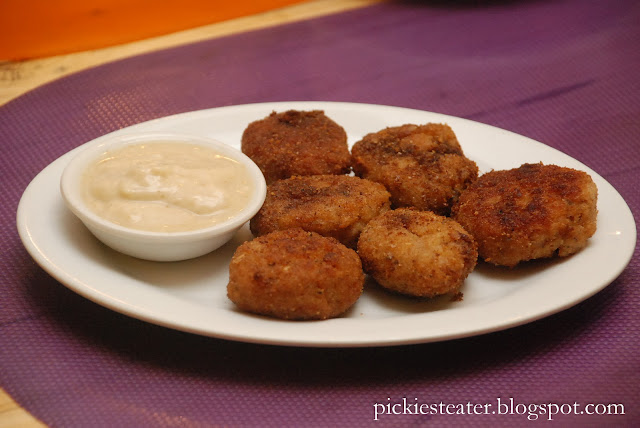 Some things aren't what they used to be


I was really disappointed with my order of the Mini Chicken Cordon Bleu (P105 for 6 pieces).  This was one of the first things I had ordered when I tried PenPen a few years back and I assure you it didn't taste and look like this. The first time I tried it, the Cordon Bleu looked alot like a McDonald's Chicken Nugget that had cheese oozing out of it. It was awesome. Now, not so much. Maybe they slightly overcooked mine, but even the texture of the meat inside wasn't the same anymore. I felt like I was eating a chicken meatball, and I couldn't even find a hint of cheese in it. The Garlic Mayo was still delicious, but the nugget, for some reason, was different. Which is too bad because they actually had something good going here. 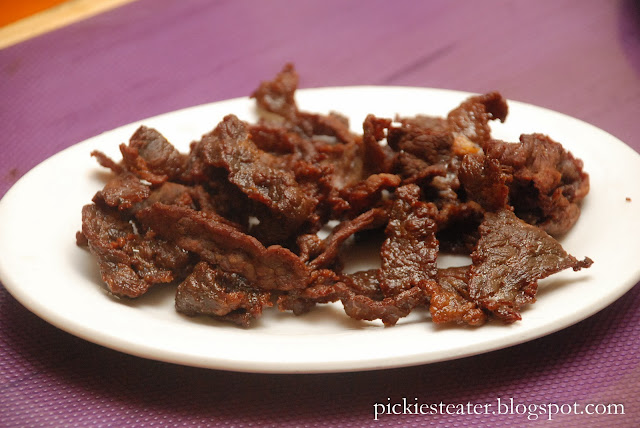 I was intrigued by the new item on their menu, The Crispy Baka Strips (P160), so despite the fact I was already pre-conditioned to ordering the crispy liempo, I said what the hell and ordered this as well. Though it was more chewy than "Crispy", the beef was well seasoned, giving it the right amount of peppery flavor. Given that it was deep fried, expect to find some resistance from the meat. This dish could have been helped a lot by using a cut of beef that has even the slightest lining of fat, instead of a lean cut. Just to avoid the dryness. It also left alot of meat stuck in between my teeth.

(They serve it with vinegar, but I can't stomach the smell, so I ate it plain) 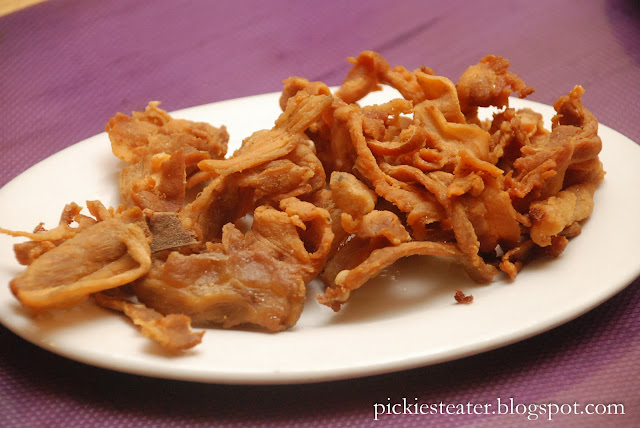 You know you want to..

Our whole trek revolved around us ordering PenPen's Crispiest Liempo (P125), which probably is their most popular item on their menu. The concept of bacon fused a legendary Filipino meal staple cannot be ignored, so kudos to PenPen for thinking this up, and having the testicular fortitude to serve this without any disclaimers.

Yes, it's pork. Yes, it's fatty. And yes, its deep fried. If you don't want to order it, then don't. I'm sure there's a Vegan place around the area somewhere. But if you're a carnivore like me, (As you may or may not have noticed, I use "carnivore" a lot in my posts. I now refrain from using the term "meat-lover" in order to avoid any more inappropriate emails from guys claiming "I'm a meat lover too ;) ") then you will appreciate the beauty of this simple dish. (They also serve this with vinegar, but again, I politely told the waiter "No Thanks".) 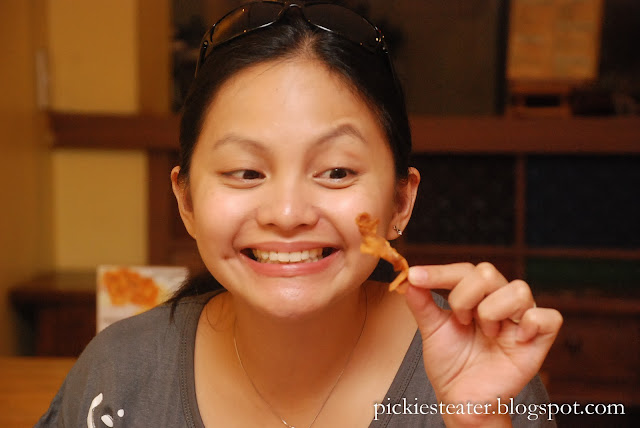 I think she found her "comfort"

You don't need to be Gordon Ramsey to make it, but even though it's a simple, almost plain dish, you can't help but love it. It was in that precise moment, when i took my first few bites of that crispy liempo that I finally understood what the term "Comfort Food" meant.

The next time I go back, i'm trying their Two Piece Butterfly Pork Chop (P160) that is described in the menu as "Oozing with Butter and Cheese". What a coincidence! I love things that are "Oozing with Butter & Cheese"! I'll probably also order their Chicken and Bacon Carbonara pasta.

(They have pasta all you can Tuesdays too.. check out their facebook page for details
Posted by The Pickiest Eater at 11:40 AM