The Pickiest Eater In The World At the Night Safari In Singapore
from richiez168 on Vimeo.
While we were waiting for our Duck Tour craft to arrive, the tour staff (comprised mostly of Filipinos by the way) suggested we check out the popular "Night Safari". Honestly, I'm really not into the whole "Zoo" thing. Don't get me wrong, I'm no animal activist or anything like that, but recently I've become more aware and more sensitive to their plight. My trip to Sun Weh was a real eye opener for me. Although I was sure that the conditions of the animals at the Night Safari were far better than the Animal Prison Camp of Sun Weh, I still thought twice about it. Of course any attempt at a protest was easily thwarted the moment my pregnant wife said, "Ah basta, I want to go!".
Word of advice to all you men out there- and I don't care how tough you think you are:
Do NOT mess with a pregnant woman.
Please watch the video before you proceed. 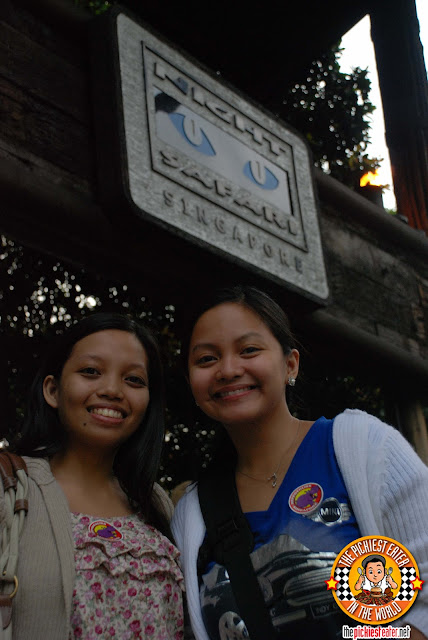 The Barbero sisters, ready for the Night Safari
After a long (for Singapore standards) bus ride, we got to Singapore at around 7pm. I was kind of surprised to see that the sun was still shining at that time (kinda reminded me of the States).

When we arrived, we were told that our trip would come in three segments. First, we would watch the Fire Eaters show in the common area where the commissaries were, then we would make our way to their Amphitheater for the "Creatures of The Night Show", then finally followed by the actual Night Safari. 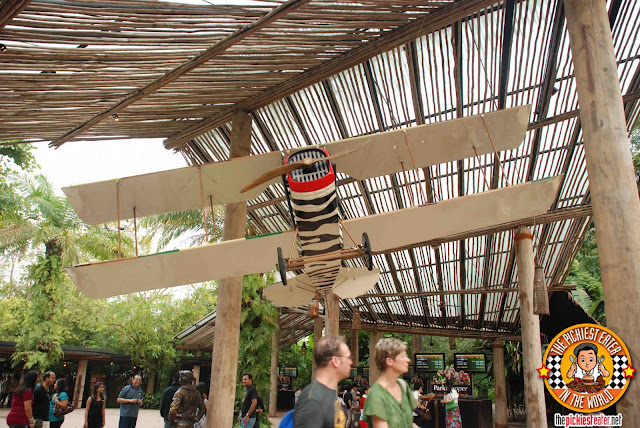 Reminded me of a scene from "Lost"
As like every other place in Singapore, The Night Safari compound is immaculately clean, and a joy to walk around in. We were lucky to have visited on a nice and breezy day, making our stay even more enjoyable. 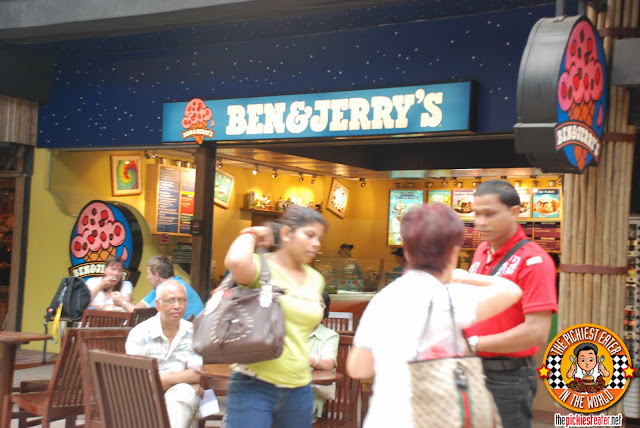 What can I say? I couldn't resist the call of Cherry Garcia.
While waiting for the Fire Eaters Show to start, Rina and Chaikka had a nice time looking around the souvenir shops (*sigh*... Women) while I passed my time by checking out the menu of the concession stands (*sigh*.. Me). Because of the astronomical prices of their food stands, I decided not to eat in any of the places Night Safari Singapore had to offer.
THE FIRE EATERS 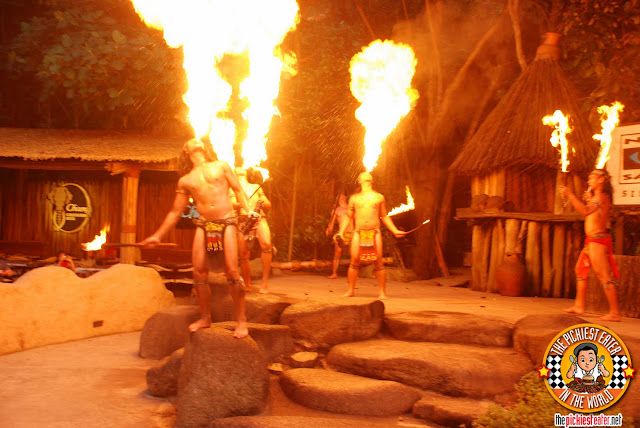 Shouldn't they be called "Fire Blowers"?


I gotta admit, these guys were pretty amazing. It wasn't your typical super choreographed tribal dance to the pounding of animal skin drums. These guys were closer to stunt men than actual dancers. Apart from blowing fire out of their mouths (and eating it) they do other stunts. 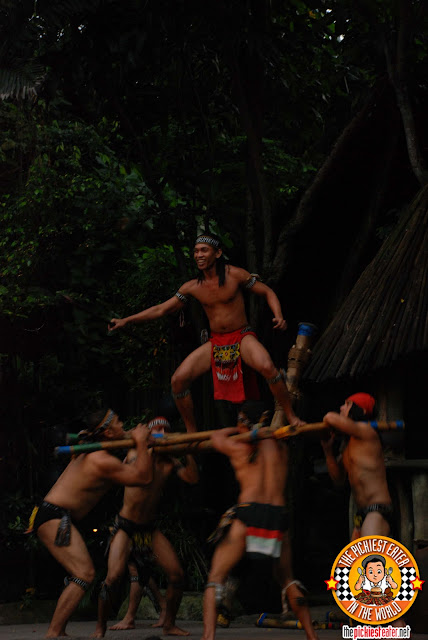 I found it kinda funny that the guy on the far left and far right are
totally looking up the loincloth of the guy on top.
I'm not really a big fan of watching guys in loincloths prancing around, so I left my camera with Chaikka who graciously obliged my request for her to take videos. Good thing she did, because their Fire Eating stunts were very impressive (check out the video if ya haven't yet). The coolest part of their act is when they pass the fireball around.. (Just watch the video already!!) 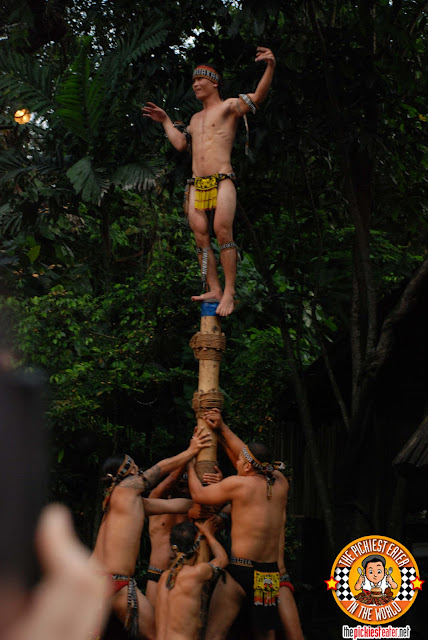 The guy on the left is doing it too!


Rina and Chaikka strongly suspect that they're Filipinos, not just because of how they look, but because of their humor. "Kulitan pang kanto boy", is how Rina described it, and the funny part was, she was right on the money. Truth be told, their humor was more along the lines of an old school "Tito, Vic and Joey" movie.
CREATURES OF THE NIGHT 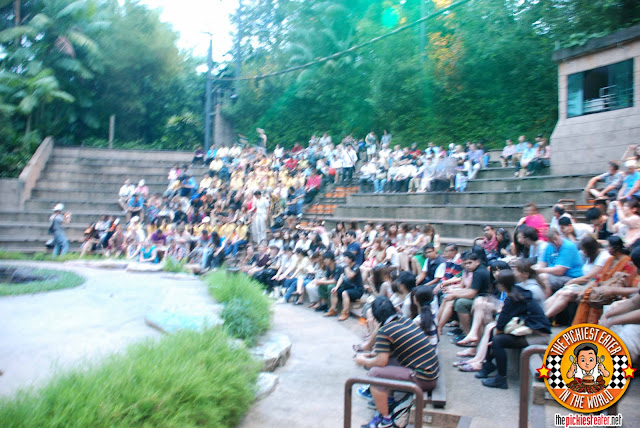 The benches in the center were blocked off because there was a "snake" under it.
All part of the show!
After the Fire Eaters show was over, we transferred to the Amphitheater, which kinda looked small at first, but accommodated our entire crowd, and we were alot of people. I actually felt a little bit better after watching the Creatures of the Night program, because I saw that the people at Night Safari Singapore didn't just keep the animals here for the entertainment of humans, but because they were taken away from worse conditions, or even illness, and cared for in this facility. 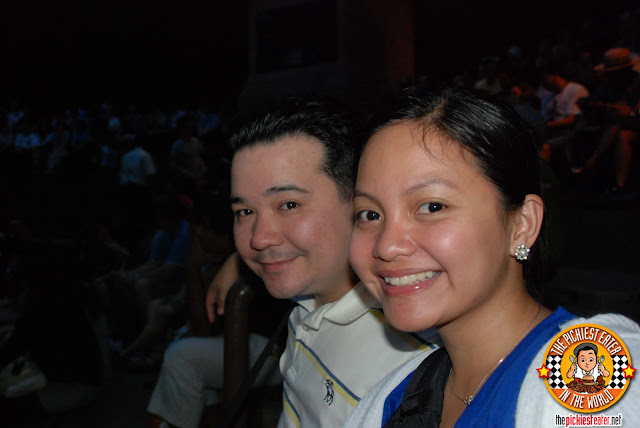 I'm only posting this picture for no other reason than "because my skin looks nice".
The Creatures of the Night show, was entertaining, yes, but there was a conscious effort to educate people about environmental issues, such as recycling and animal protection, without being too preachy. Instead of a boring lecture where we're told about how  Recycling has helped reduce greenhouse gas emissions, and stuff like that, we were introduced to "Felix", the Oriental Small Claw Otter! This video, is a scene from what was my most favorite part of my trip to Night Safari Singapore.
THE PICKIEST EATER IN THE WORLD MEETS FELIX, THE RECYCLING OTTER!
from richiez168 on Vimeo.
Off the top of my head, I can think of quite a few of my friends who still struggle at figuring out which trash belongs into one bin. So if little Felix, an Oriental Small Claw Otter (albeit a very smart, Oriental Small Claw Otter) can figure it out, why can't we, right?
Because Flash Photography was prohibited in the Creatures of The Night show, Rina didn't take any pictures, but I was able to take alot of video to give you an idea of what we saw. By the way, the host was pretty excellent. She was eloquent, witty and engaging, and you never felt bored watching the show.
THE NIGHT SAFARI 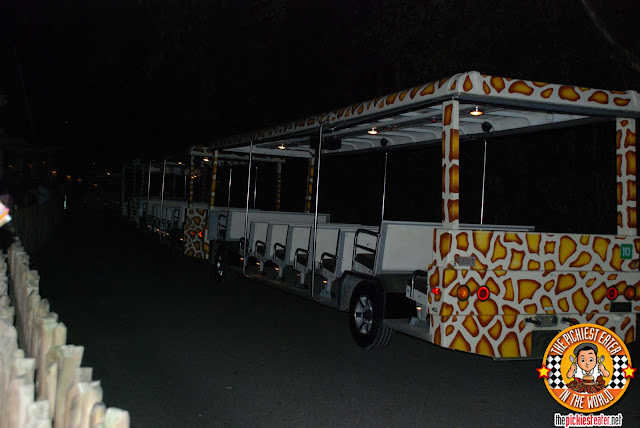 The print of the car matches my undies! Coincidence? I think not!
We rode in the long tour vehicle around the grounds as we embarked on the Night Safari. Since it was done in the dark (hence the "Night Safari" part) and flash photography was not allowed,  Rina wasn't able to get any pictures, and My camera was low batt already so I don't have any video (Actually I just forgot to record). 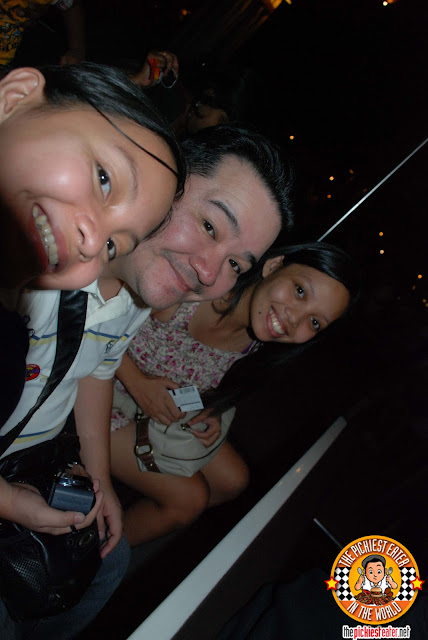 Ready to roll!
We did see some pretty cool animals. Lions, Tigers, Elephants, and Giraffes are just a few among many other animals that the Night Safari has in their grounds. The conditions actually look very good, so you leave with the impression that they're in very good hands.

Though I was reluctant to go there at first, by the end of the night, I was glad we went to the Night Safari. Though the Safari itself was a bit longer than I would have wanted it to be, I still enjoyed it nonetheless.
PARTING SHOT
If you're an animal lover, you're going to enjoy this. But if not, there's a good chance you're going to get bored out of your mind during the actual safari. The Creatures of the Night show was highly entertaining, because it was interactive as well, and the host was really good at keeping the audience awake (I was sleepy as hell going in but i didn't drift off even for a second). The Fire Eaters were a good start to the activities, and their daring stunts, mixed with their light comedy was very enjoyable.
One thing I've got to say is, I was very disappointed in some of the people in our tour group. How hard is it to understand that Flash Photography startles the animals,and could agitate them? Our tour vehicle had to stop at least three times because the morons in the row behind me kept firing at will, full flash and all. The tour guide finally had to ask the driver to stop and tell everyone, "We will not be going any further until everyone turns off the "Flash" functions from their cameras. We do not want to do anything to put the animals, or anyone in the tour group at risk." I seriously wanted to stand up, point to the culprit behind me and yell out, "IT'S HIM!! IT'S THIS GUY!!!".
Apart from that, It was a great way to end out first day in Singapore.
Of course, that wasn't the end of our day.. We still had dinner to look forward to!
For more information on the Night Safari Singapore, just go to www.nightsafari.com.sg/
More Pictures 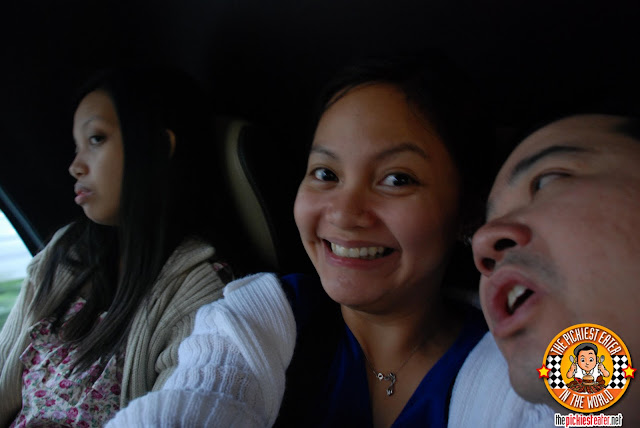 Rina was trying to get a picture of Chaikka sleeping but she opened her eyes at the exact moment Rina pressed the button.
"Huli Ka!" 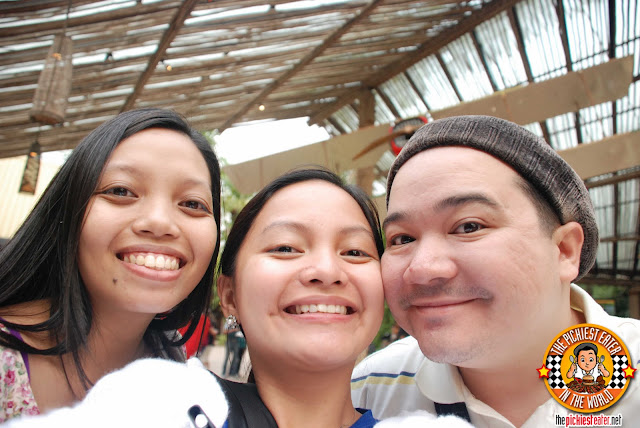 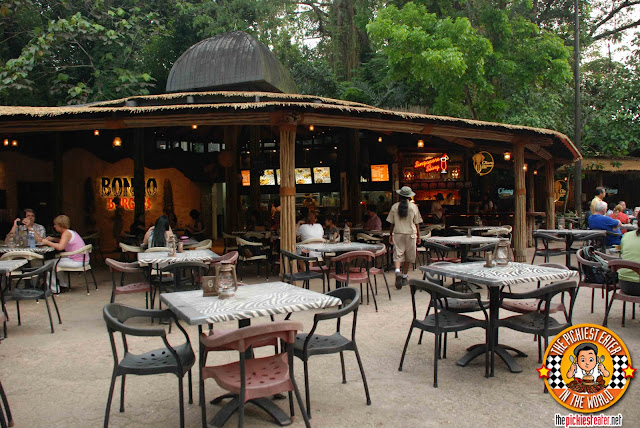 Too bad I didn't get to try "Bongo Burgers"! 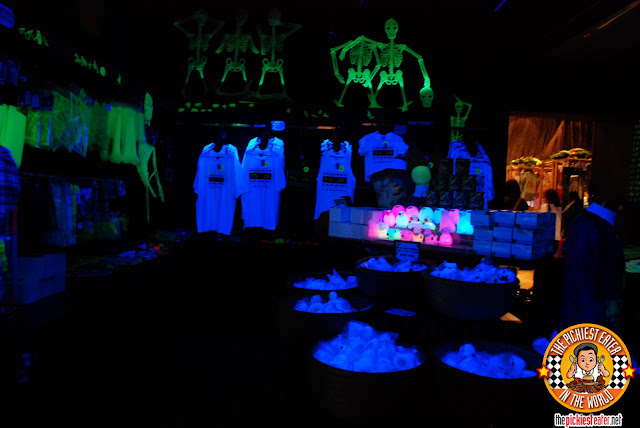 The Glow In The Dark Souvenir Shop 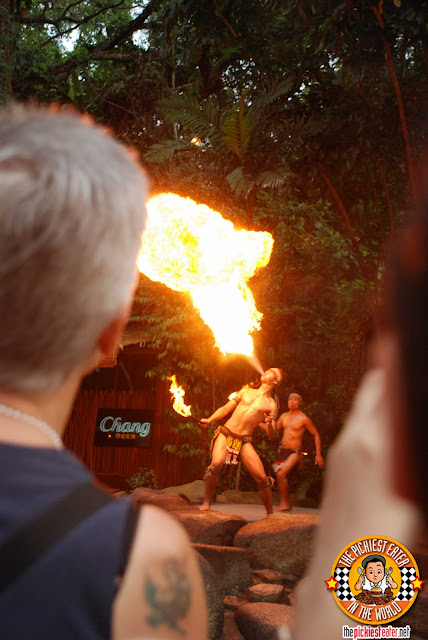 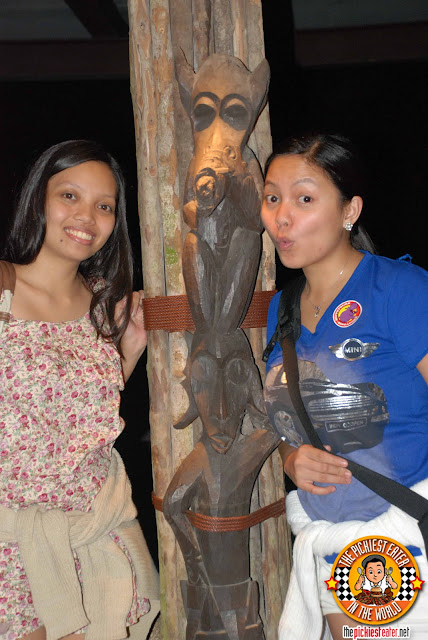 Rina and Chaikka Monkeying around 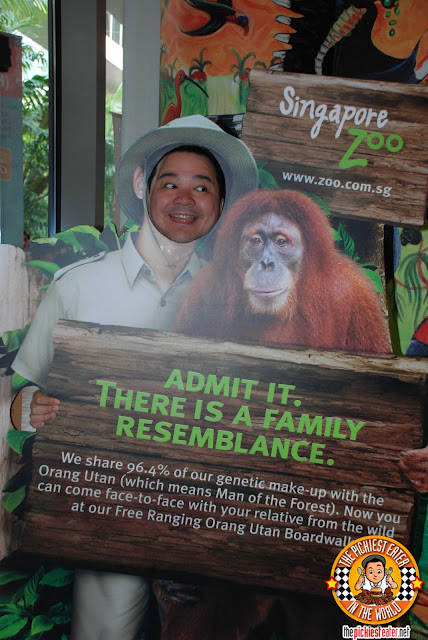