OUT OF THE TOAST BOX 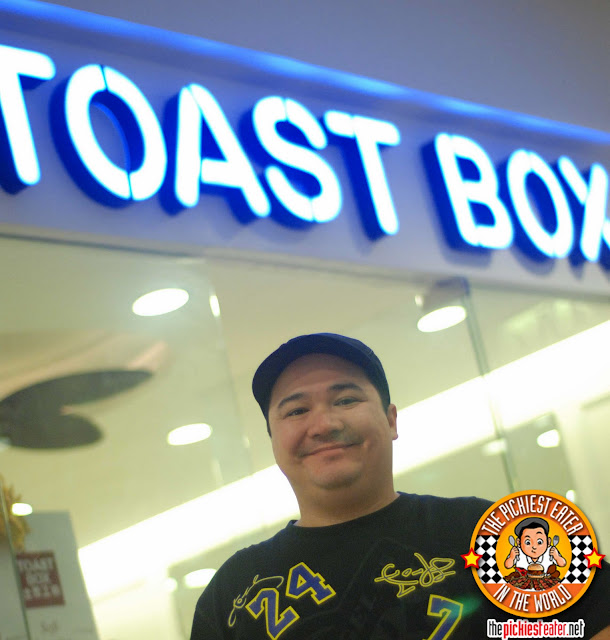 If you are reading this post sometime between March 2-5, then that means I am now in Singapore with my wife Rina, her sister Chaikka, and hopefully her boyfriend Don. At this very moment, I am probably feasting on some chicken rice, or riding a roller coaster in Universal Studios, or having pictures taken at the Merlion statue (I wonder if i'm allowed to eat that hehe).

In honor of my trip, I'm posting my two visits to the Singapore based "Toast Box", the newest coffee shop from the people who brought you the very awesome, "Bread Talk". I'm a big fan of Bread Talk, (especially their Cheese Floss), so hearing that they were the brains behind this operation got me all giddy.

One of my Bosses at work, Miss Menchu, had been here already, and she suggested I try a few things. Unfortunately, she and I have the complete opposite tastes when it comes to food (I'm a firm believer that bacon should be a part of everyone's diet, while she can live on salads and tofu and all that gunk), so i wasn't sure what to expect from her suggestions.

Nevertheless, Rina and I trooped over to Greenbelt 5 (I'm there a lot, I know) to get us a taste of some of Singapore's finest food. (Not to mention, to meet up with our friends Ted and Karen as well). 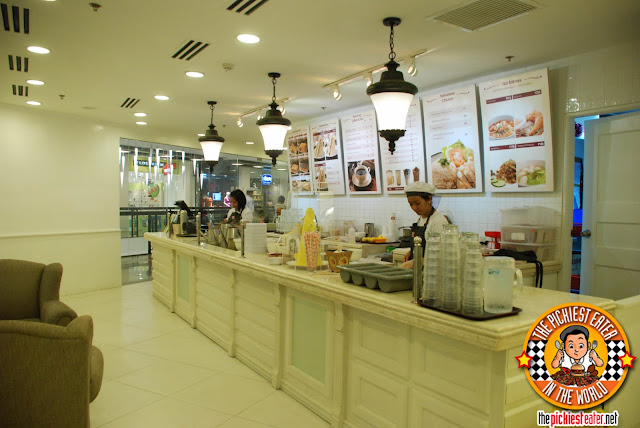 
I think the look and feel of Toast Box captured what I expected Singapore to be like. Pristine and orderly (and maybe just a tad bit stiff). Everywhere you look, it's white all around you, giving the effect that the place is immaculately clean. For me, It's not exactly "Cozy" enough to be a cafe (I was half expecting someone to come in and give me a demerit for "slouching"). 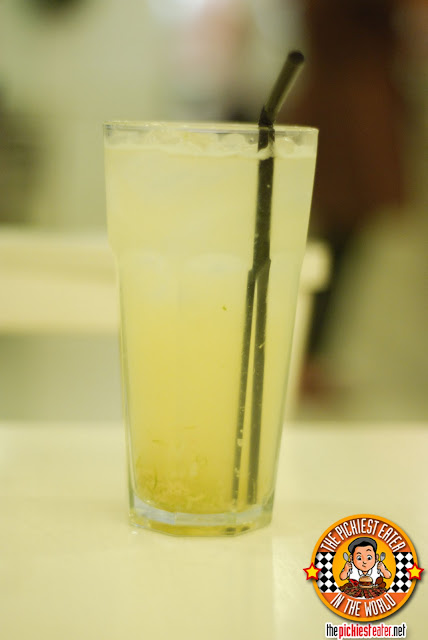 I ordered the Ginger Lemon soda or something like that that Miss Menchu suggested. I actually got it for Rina, thinking that she would like it. She did not. In fact, she was kind of upset that I ordered it for her. hehe.. It was like drinking pure sour lemon. Taking one big sip would leave your face looking a bit like Joan Rivers for a few moments. Maybe I was supposed to load it up with sugar or some sort of syrup. Regardless, I didn't like it, and neither did Rina. 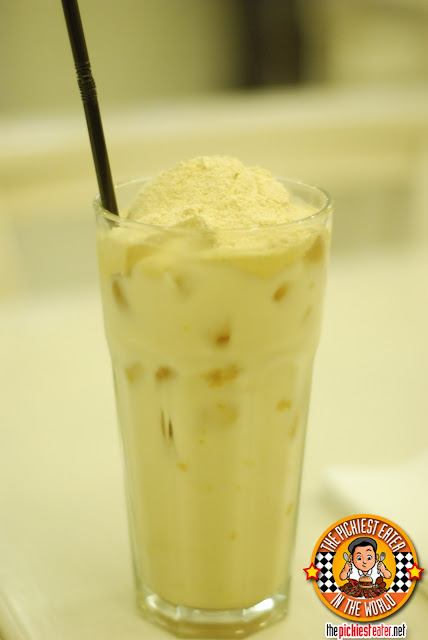 This would have made Rina's list.. if not for..

As a kid, I used to LOVE Horlicks. Imagine how addicting "Ovalteenies" are, and multiply that to a million. I actually didn't know Horlicks was still in existence until I saw the name "Horlicks Dinosaur" on Toast Box's signboard. I had no idea what the "Dinosaur" part meant, but all I knew was that I wanted in on it. Basically it's a dinosaur because it has a lump of Horlick's powder coming out from the "water".. umm.. I'm assuming.. "like a dinosaur"? It doesn't matter what they call it though, because it is pretty refreshing milk chocolate drink. In fact, it is the newest member of Rina's "Best Thing Ever" list! For me though, It was something I couldn't take too much of. Especially when the powder got lumpy and the taste watered down? I couldn't finish it. 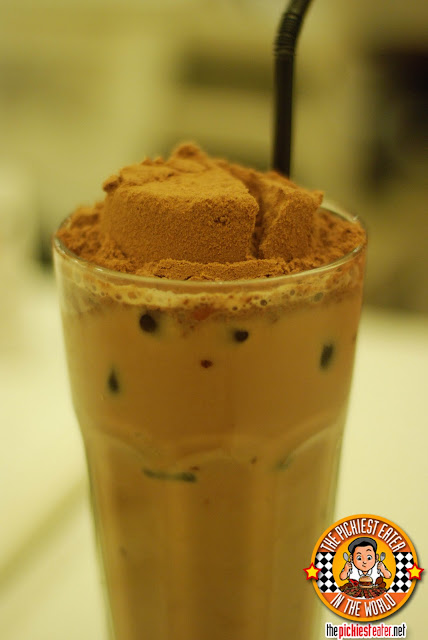 The Milo Dinosaur was a more chocolatey version. I'm pretty sure you all know what Milo tastes like so this doesn't need much explanation. All though I must admit, the watered down Milo Dinosaur tasted a bit better than the Horlicks, for me. 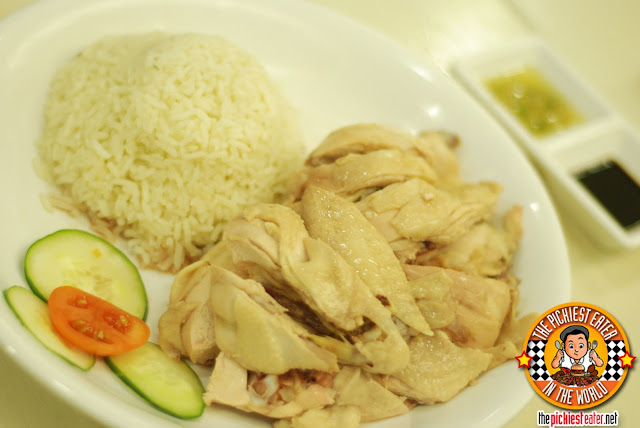 
It wouldn't be a Singaporean restaurant without Hainanese Chicken Rice (P298 for 1/2 chicken with rice), right? Though it falls a tad bit short when compared to that of Wee Nam Kee. The chicken was soft and juicy, and I surprisingly enjoyed t the white meat almost as much as the dark (That rarely ever happens). The ginger sauce that they provided was the perfect companion to the chicken, and it help accentuate the flavor of the meat, without overpowering it. The Chicken rice itself was also very good, but not Wee Nam Kee level. Price and taste wise though, This wasn't a bad deal. 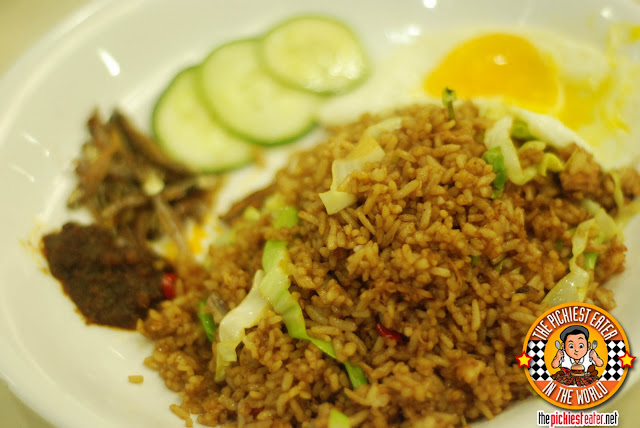 Upon Miss Menchu's recommendation, I ordered Rina the Nasi Goreng (P170). Despite the strong taste of Shrimp paste (bagoong) that I don't usually like, I found this to be quite good. It's a mixed fried rice with a sunny side up egg on the side, as well as dilis and bagoong. My only problem with the dish was it was a tad bit too spicy for me. However, in the grand scale of spiciness, it wasn't exactly incendiary. But anything spicy gives me acids, so I have to go slow when eating this. I had a few bites and that was enough for me. 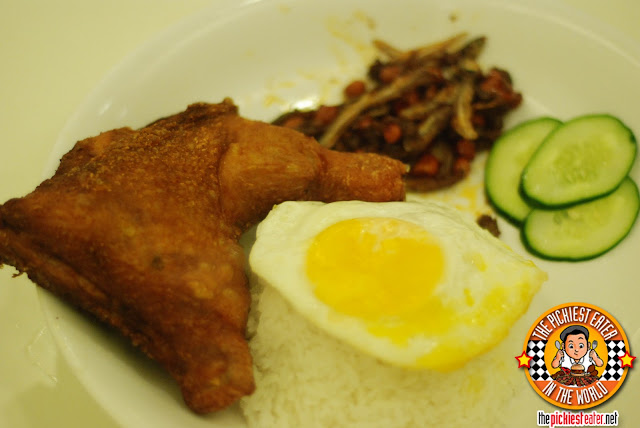 During another visit, I ordered Rina their Nasi Lemak with Chicken P160 for her to try. It's technically fried chicken with chicken rice and egg. The problem began with the chicken being a bit over cooked, and tasting slightly burnt. Our order came to us a little bit dry and tough. I was surprised that they still served it to us, because you can tell it was dry just by looking at it. 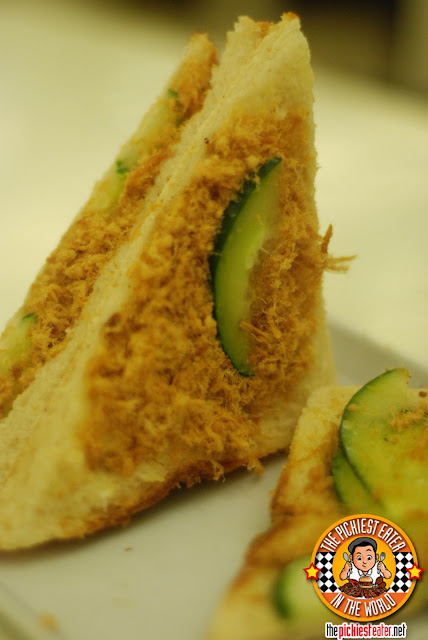 Since Toast Box is from the Bread Talk family, you can imagine how excited I was to try their "Floss Sandwich".There was a time I was seriously addicted to their Cheese Floss, and I was hoping the sandwich would be something close to that. I was sorely disappointed. The bread was toasted in a way that it was a bit hard, (which is fine because i like my bread that way), but you couldn't differentiate the pork floss in your mouth from the coarse, dry bread. Not even through taste, because the floss didn't have any semblance of flavor to it whatsoever.  I'm sticking to Cheese Floss. 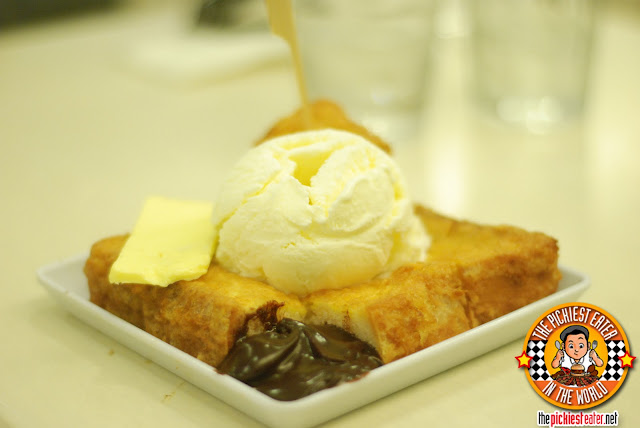 For Dessert, we tried the French Toast Ala Mode, and I really enjoyed it. You have the fried bread and butter, and instead of maple syrup you have a scoop of chocolate sauce, topped off with ice cream. Everything melded well together to make a delicious dessert. The bread was fried just right, so the crust is beautifully crunch, but the bread inside was still soft to the touch.

Service-wise, my first trip to Toast Box was a good one, however, my second one, left much to be desired. It started from the moment I ordered. There was a girl behind the counter, who took my order of Nasi Lemak. In fact, While I was giving my order, she even repeated, "Fried chicken, Sir?" for confirmation. While I was in the middle of talking, she goes "One moment sir", and then leaves. Next thing I know, there's another girl in front of me, taking my order. I continue my order of the pork floss sandwich and the Milo Dinosaur, which she takes down. I pay for our meal and join Rina at our table. A few minutes after the sandwich was devoured, I check the receipt. It was only then I realized that the new order taker didn't get my Nasi Lemak order, and the first order taker didn't bother to turn over the order to her like I thought she did. She just got up and left, expecting me to repeat my order. My fault for not realizing that I paid too little, but still. There should have been at least a transition of what orders the previous one had already taken- or at the very least, the new order taker should have asked me, or repeated my entire order.

Second of all, While Rina was taking pictures, the girl was rather rude. Maybe not a vulgar type of rude, but she had no finesse in her whatsover when she told Rina pictures weren't allowed in the hallowed land that is known as Toast Box. When Rina was taking a picture of the menu, she yelled out at Rina from behind the counter, "EXCCUUUUUUSEEEE MEEEEEEEEEEE!!!" And Rina goes, "Yes?" and she says "Bawal Po." Then Rina went up to her to explain,"It's for a food blog. We were going to feature Toast Box in-" and the bitch interrupts Rina and repeats what she said with an arrogant smirk. "Bawal".

Unlike other classier places, this girl offered nothing more than cold "Bawal" to Rina. This isn't the first time we've been told that we're not allowed to take pictures in their restaurant, but it was the first time that we were treated like trespassers who got caught trying to jump over the fence. When someone approaches us, it's usually with a very apologetic "I'm sorry Ma'am, but it's company policy". We may not like it, but we appreciate the manner it was done. Plain and simply this girl was Bastos to her customer.

And the funny part was, I think she was already manager or something. So to the people at Toast Box Greenbelt 5? I suggest you send "Jendry" to charm school, so she knows how to handle her customers better.

Despite loving the Horlick's Dinosaur, she has vowed never to go back again, due to the arrogance of the girl. 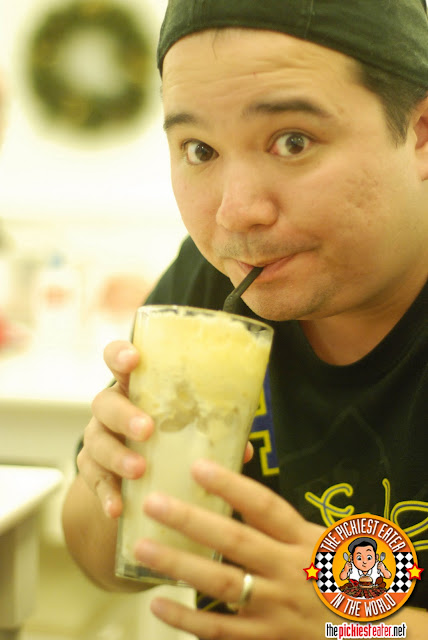 First I had the Horlicks Dinosaur, See? 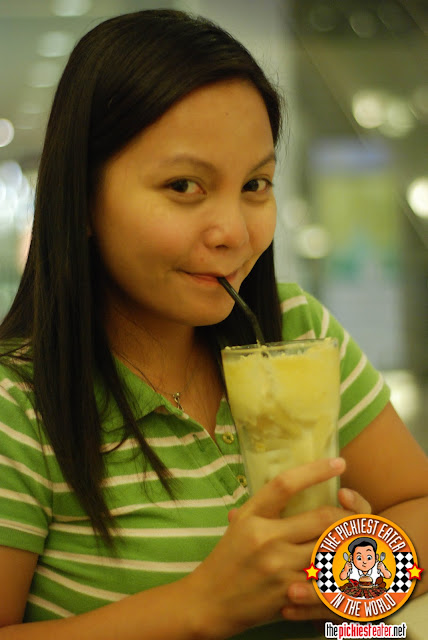 Then it was sequestered by the missus. 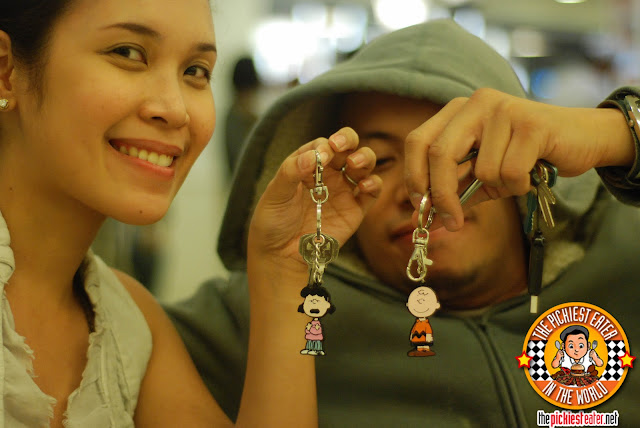 The love birds, Karen and Ted.