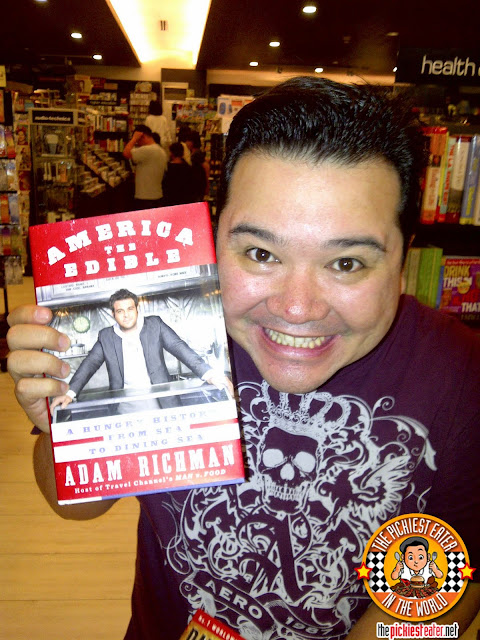 Adam Richman released his book, " America The Edible: A Hungry History From Sea To Dining Sea" late last year, and I KNEW I had to get it. Since December of last year, I would go to Fully Booked or Power Books whenever I would have the chance, and ask if they had it already.. to no avail.


Then just this Saturday, we headed off to Rockwell for a food trip, and to Catch, the movie "THOR" (Good movie by the way.. I just didn't like the "teaser" ending that has become a "Marvel" tradition). After the movie, I walked into Fully Booked, not thinking about asking for the availability of "America The Edible". Instead I was distracted by choosing whether to buy "The Lost Symbol" (finally out on softbound), or "Abraham Lincoln, Vampire Hunter". The Lost Symbol was around half the price of Honest Abe's Vampire escapades, so Robert Langdon out.


In was in the precise moment after immediately paying for my book (P255 in case you were wondering) that I remembered to check for "America The Edible". The "Food" section row is located directly behind the cashier.. So as soon as I turned around.. BAM! There it was.


I let out a sound (one that I can only describe as a short "Yelp" and am certain could not duplicate even if I tried) grabbed it and trooped to the cashier. Of course I showed it to Rina first, who couldn't resist taking a picture of my elation.


Of course in my excitement, I failed to check the price of the book (which turned out to be P1,170), so you can imagine the look on my face when I got to the cashier. But of course, I was already at the point where I didn't care any more! I was just happy to finally have the book in my hands.

I don't read many books.. Off the top of my head, I can tell you that the only books I've read (not required for school) have been:

1) The Belgariad Series & The Mallorean Series
(as well as Belgarath The Sorcer and Polgara the Sorcere)
2) Jurassic Park
3) The Harry Potter Series
4) Angels & Demons, and The Da Vinci Code
5) I am Legend
6) The Fellowship of the Ring & The Two Towers
(Have yet to read "Return of The King"
7) The Twilight Series
8) The Lovely Bones

I'm sure there are few more here and there that I can't remember but just so you know, the list grows exponentially if we include The "Encyclodedia Brown" and "Choose Your Own Adventure" series'.


I'm still at the second chapter, but basically the book seems to be about segments from Adam's life, his struggles, and some of the memorable food stops he's been to.

Reading the intro alone got me all giddy.. Especially when Adam laid the list of "Things No Foodie Traveller Should Be Without".. Which turned out to be pretty much a laundry list of everything inside my bag! Which means I've been doing something right!


"THINGS NO FOOD TRAVELER SHOULD BE WITHOUT" By Adam Richman

(Adam's words in bold, my two cents below it) 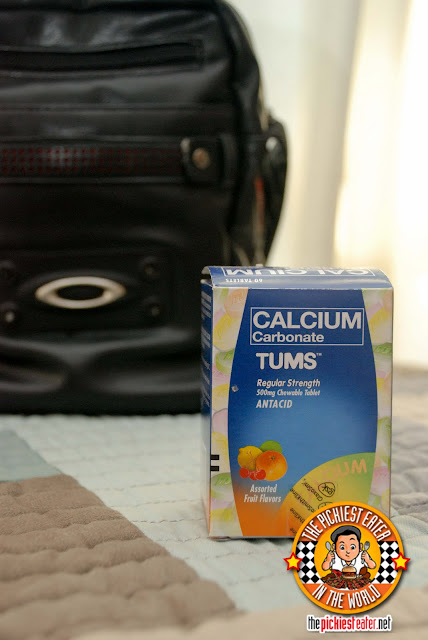 Adam has a deal with Zantac, so that explains his choice. Me on the other hand, I don't go anywhere without a couple of Tums in my bag, or at the very least, Kremil-S. I prefer Tums because of the fruity flavors.. Especially the Red ones! (Cherry, I think the flavor is) As you can see, I buy it by the box. 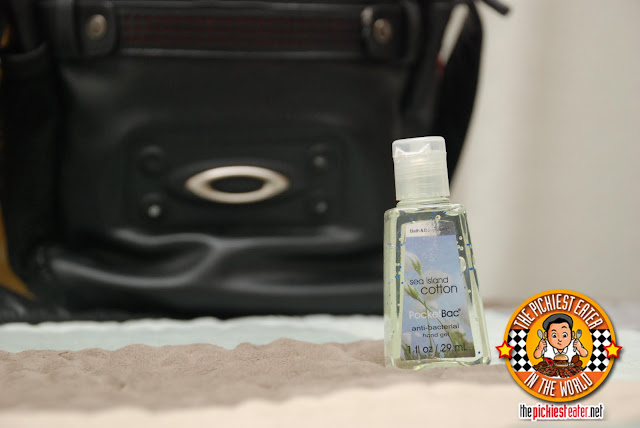 I really do hate having stinky hands, so I carry a tiny bottle of hand sanitizer or alcohol in my bag at all times. Rina just got this specific scent recently.. "Sea Island Cotton", and its smells phenomenal. I kept putting my hand over my nose afterward. 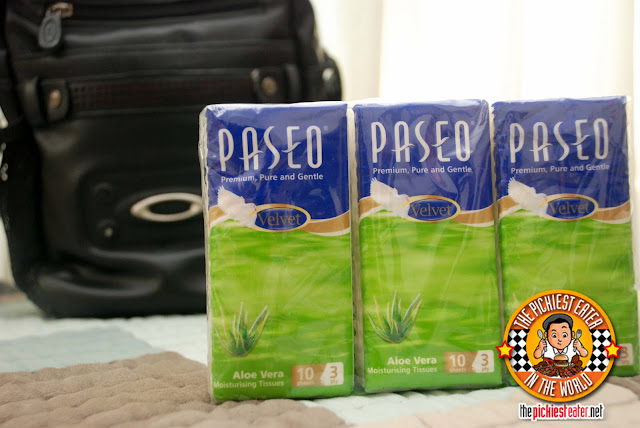 "3. Napkins or a wet wipe or two because the DON'T always put
"napkins in the bag""


I don't want to get into graphic detail, but.. Words cannot express how keeping a pack of one of these bad boys has saved my life on more than one occasion. As a hyper acidic with a notoriously bum stomach, it's imperative that I have one of these at all times.

Funny/Gross story.. I went to the restroom of a mall one day, and headed for one of the stalls.. When in a public restroom, I usually choose the stall at the far end of the room. As I entered, I noticed that there was no toilet paper, so I moved to the stall beside it, which had a full roll.

A minute or so later, while I was doing my business, A man burst through the bathroom door, obviously at the brink of letting one rip. He ran into the last stall, locked the door, and I could hear how hurriedly he unfastened his belt buckle and pants like his life depended on it. As soon as he sat down, I had wished that I had brought some earphones with me, because what followed was not music to anyones ears. I got myself ready to leave, because I didn't think my olfactory senses could handle what my auditory senses just went through. Then it hit me. As I left my stall, trying to hold back my laughter, it seemed to have hit my bathroom neighbor as well. "OH SHIT!", he appropriately exclaimed. I guess he realized that in his haste to decimate the toilet bowl, he had failed to check if there was any tissue in his stall! "Excuse me!! EXCUSE ME!", he cried out to anyone who was listening.

I know it was mean, but I had to head out, because I was cracking up so hard! Being the good Samaritan that I am, I informed the janitor on my way out that someone was in there and had a slight "Problem". 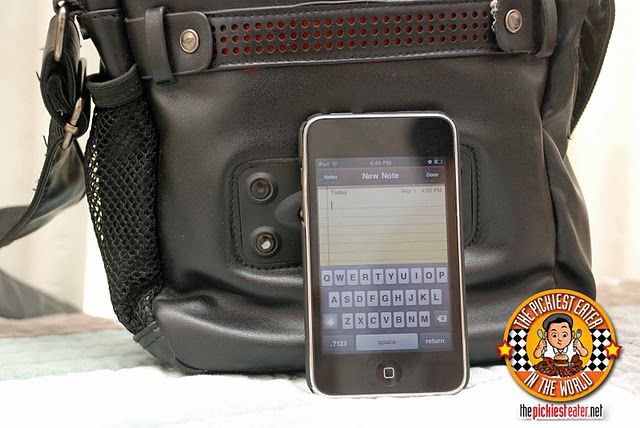 I have the worst handwriting in the world. I'm not ashamed to admit it. It's really horrible. If the Pentagon found my high school term paper, they would assign a whole department to decrypt it, thinking they were on the brink of discovering the mode of communication of an ancient civilization.They would never have figured out that I was actually writing about my thoughts on the relationship between Heathcliff and Catherine in "Wuthering Heights". In this digital age, I can say I'm a master typer. So instead of having to write everything by hand, I do it on my trusty old iTouch, which was a gift to my from Rina a couple of years ago. I just glance at it when I'm writing on my blog, to refresh on my experience, and viola, I'm good to go. (And maybe play a little Plants Vs Zombies while waiting for my food) 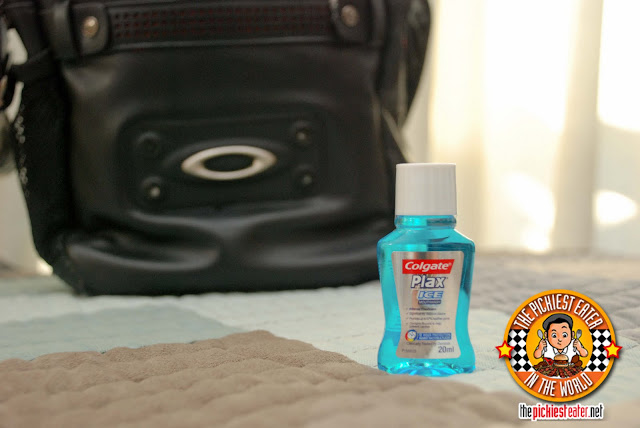 "5. Mints - Not just in case of bad breath, but also for times
(like when a dish sucks) when you want to cleanse your palate ASAFP!
I like Listerine PocketPak Strips"


I used to carry a handful of I-Cool, or Double Mints around with me at all times, but recently I decide to go with Mouth wash (usually Astring-o-Sol Specialist), because it's easier on the teeth. Rina found these tiny bottles of Colgate Plax which she found so cute that she couldn't resist buying some for me! 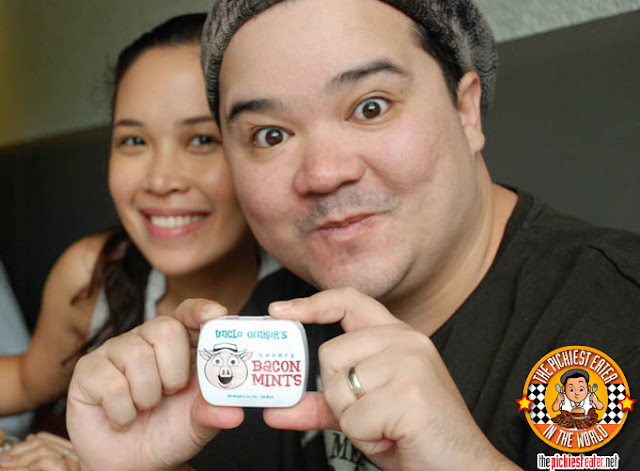 Not to mention my beautiful friend,
Karen got me My kind of Mints for Christmas! 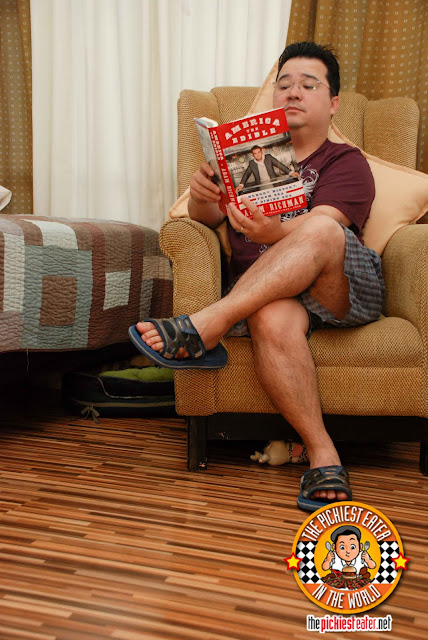 That's Schatzi's toy under my seat


I think it was really cool that all those "Must haves" even without hearing it from Adam. I've just begun the book, but I'm enjoying it so far. Imagine the same kind of humor that Adam displays on MVF, only this time, allow him to cuss a little bit more. Also, there's something about reading a hard bound book that makes you feel more intelligent than usual.
Try to grab a copy of the book if you can!

Posted by The Pickiest Eater at 5:09 PM

Email ThisBlogThis!Share to TwitterShare to FacebookShare to Pinterest
Labels: America The Edible