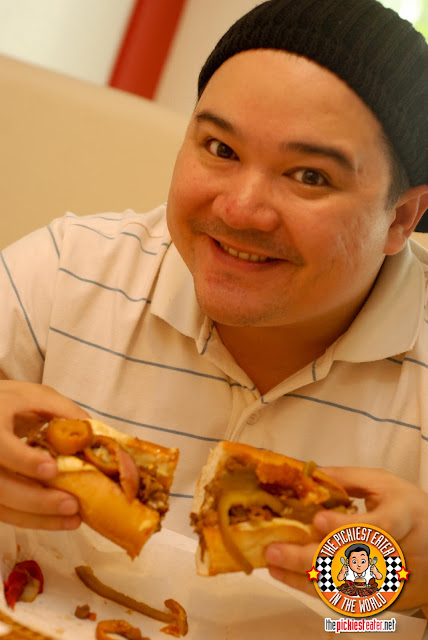 Earlier this year, the company I work for moved offices.. From the relatively quiet C. Palanca Street in in Legaspi Village, Makati. We are now located along the bustling Arnaiz Avenue. I enjoyed working (and for a time, living) in C. Palanca street, because everything you needed was walking distance. Need to go the grocery? Go to Rustan's want to catch a movie? Go to Greenbelt. Need a place to eat? Well, apart from the obvious restaurants at Greenbelt, there were a few gems scattered around the area, such as Bob's, Plantation, and even Gustavus.

Arnaiz Avenue has an eclectic choice of restaurants to choose from, but they are just a bit more expensive than C. Palanca's offerings (Palanca has a Mang Inasal). I've been to a few, but I realized I haven't featured any just yet. On a day that I was ticked off at my cellular network provider for screwing me over (They have since rectified the situation), my friend, Rain offered to go with me grab a bite to eat so I could cool my head (Ahh, the healing powers of food). As we strolled along down Arnaiz Avenue, I continued to bitch about my situation with my cellular network. All of a sudden Rain stopped in her tracks to say that  she remembered that she had just seen a place called "The Cheese Steak Shop" newly opened just down the road from my office.

And just like that, everything was right again in the world. 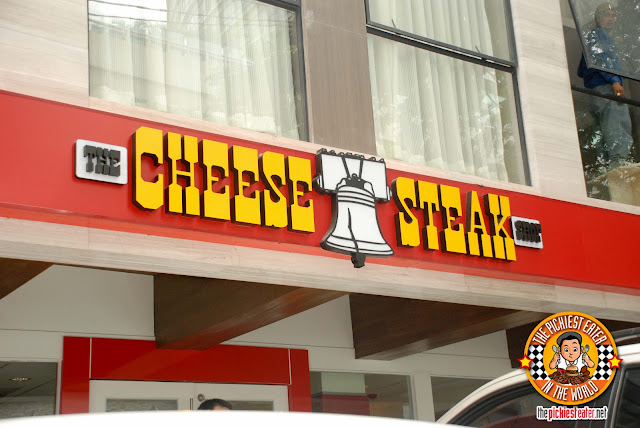 Seeing the sign was like Mana from heaven. I really love cheese steaks, (Much to Rina and my labandera's dismay) so this would be exactly what I needed to get my mind off my frustration. In my quest for the best Cheese Steak in the land, I was eager to see where "The Cheese Steak Shop" would place on my list. 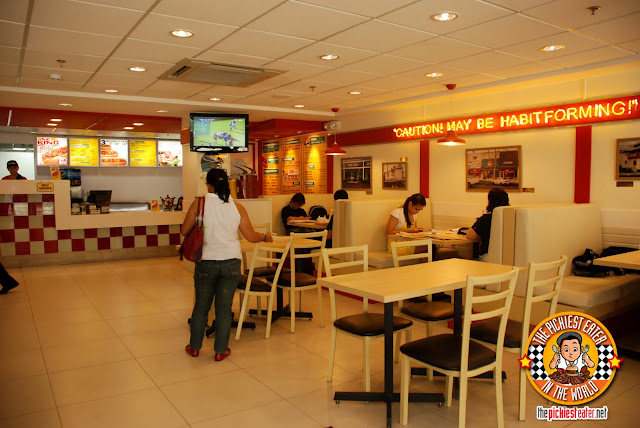 At the time I visited, The Cheese Steak Shop was still in "Soft Opening" mode. The interior has a minimalist diner style feel to it that looked absolutely spotless. There's a neon sign on the side that says, "Caution: May Be Habit Forming". Considering the fact that I've been there two other times since, I think they might be right.

My biggest comment about the place is that, the menu is a little bit confusing. Do NOT look at the menu that is taped down at the counter, because you'll get even more lost (After reading it, I asked for a "Barbeque Hoagie" and it turns out, they are two different sandwiches: Barbeque and a Hoagie). stick to the big menu on the right side of the wall. 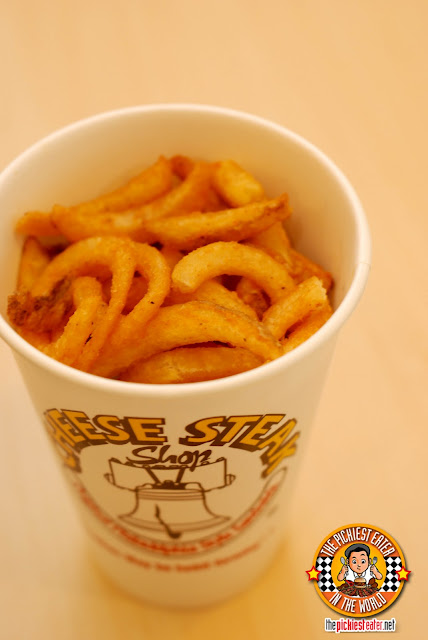 For my Cheese Steak Meal, I ordered the Twister Fries (P99). Not as good as the ones over at Wingman, but it was still good nonetheless.  Not much I can say about it. They were decent, standard issue, Twister Fries. 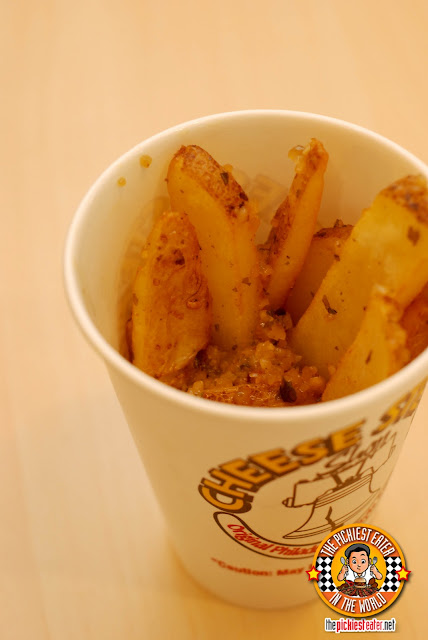 I didn't enjoy the Garlic Fries (P99) so much, mainly because they used the thick cut steak fries that I don't like. If you're into garlic though and don't mind thick cut fries, then this might be right up your alley. I would still prefer "Eat My GF" (And yes, I'm still talking about Garlic Fries). 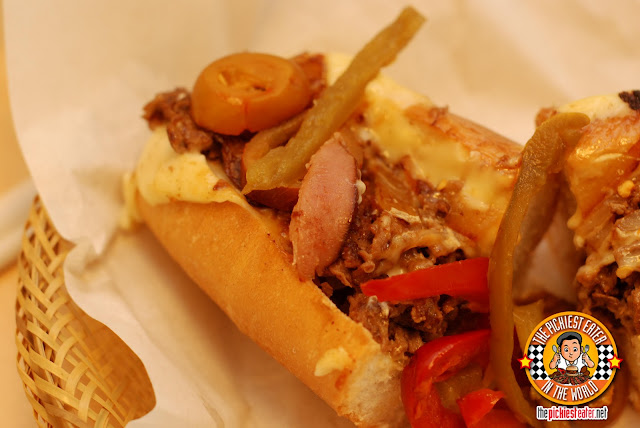 I'm sure it would shock no one that I chose the Bacon Cheese Steak (P320 for "7). Let me just say, in terms of appearances, among all the other Cheese Steak places that I've been to, THIS is EXACTLY what a cheese steak should look like, in my book. I don't need the refinements of HYPHY'S. As much as I enjoyed the cost effecient Phily's, you don't serve Cheese Steaks on round Hamburger Buns. Elbert's was almost there, but the quantity of actual steak let me down. This was sloppy, and the steak was just bursting out of the seams. 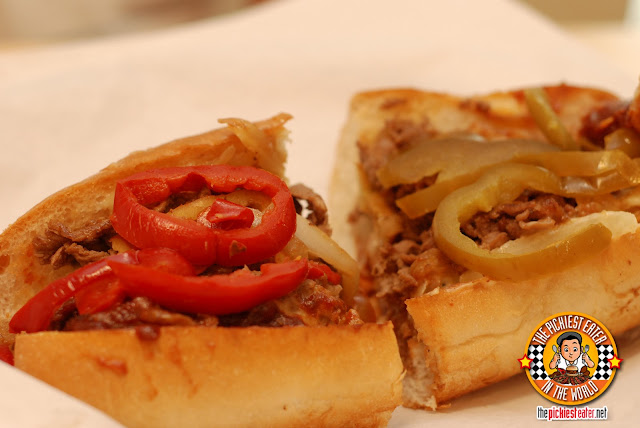 What's good about The Cheese Steak Shop, is that they ask you before hand if you want Onions and Peppers on your Cheese Steak. Of course I wanted Onions, and though I was a bit wary to add the peppers, because I was worried it would give me a tummy ache, but decided to go for it anyway, because it would make for prettier pictures. Also, in my third trip, I found out you could go for sweet peppers (yum) instead of the hot ones, too!


Bacon-wise, It was a little disappointing, because I really had to dig deep to find the strip of bacon. However, the amount of meat, and flavor, was excellent. 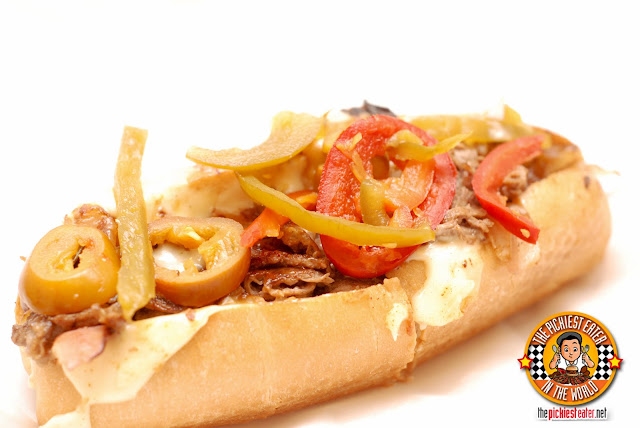 I also ordered the "Western Cheese Steak" Which also featured bacon, BBQ sauce and crispy onion rings. Again, I couldn't find the bacon, but the onion rings were rather prominent. The sweet and tangy BBQ sauce was quite delicious, and was a good companion to the meat. But in all honesty, I prefer a milder sauce so that you get the full natural flavor of the steak on its own. The bread that they used was soft as moist as well, but nowhere near the awesomeness of Elbert's.


Overall, I enjoyed The Cheese Steak Shop's sandwiches very much and wouldn't hesitate to go there again. However, They could stand to add more cheese to their dishes. They also don't come cheap. Also, the 7" is good enough to get the average man full, so unless you're sharing, there's no need fo you to go for the 10" or even the 15".

Posted by The Pickiest Eater at 12:01 PM