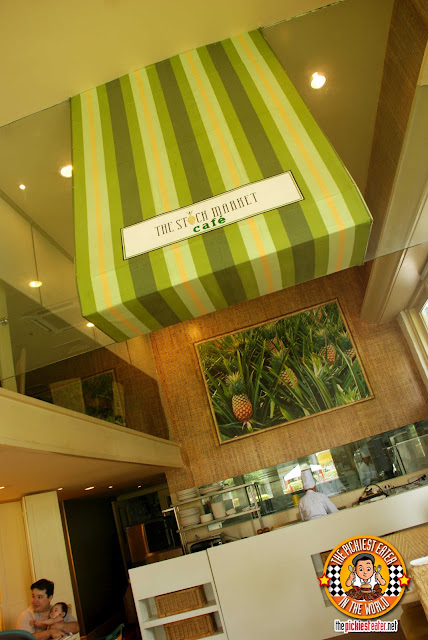 Last weekend, Rina and I decided to take Baby Rain out for a stroll at Bonifacio High Street. Funnily enough, it was such a beautiful day when we left the house, we didn't even think to bring an umbrella anymore. Since we were with Baby Rain, going down from the car calls for the unloading of a stroller and baggage that would make one think that we're actually heading to Singapore instead of a local strip mall. Because of that, whenever we go to High Street, we find it easier to park at the basement of Serendra (also because it's covered, in case of the heat), and take a leisurely stroll across the street.

It was a little bit ridiculous because as soon as we crossed the street to High Street, we heard a thunder clap and within seconds, the rain began to pour. Realizing we were unprepared for the situation, I told Rina I'd take her out for lunch at a restaurant of her choice.

She immediately chose Stock Market Cafe. I asked if she would reconsider because we had already been there, but she was quick to point out that I went there with my Giant Joel and the lovely Donna.. My workmates.. without her. She let the guilt sink in me a little bit before she went all wife on me and said, "Where ever you want is fine."

Two minutes later, we were standing in front of Stock Market Cafe, asking the hostess for a table for two. 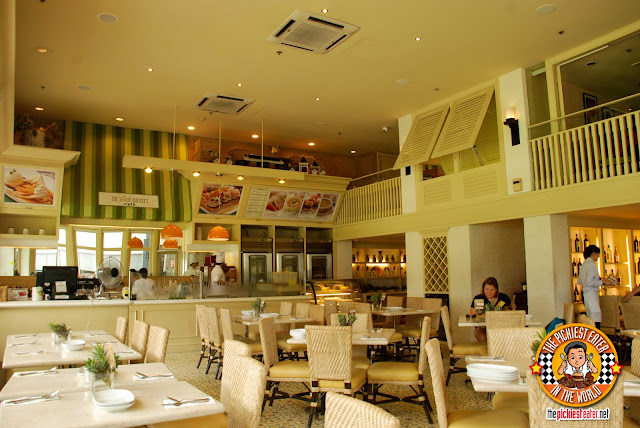 I very much enjoy the relaxing ambiance of The Stock Market Cafe. When I was there the first time, It was quite bustling, packed with customers, yet you  feel right at home. I find the white and green hues to be quite soothing. The large Picture windows that cover the entire walls lets the sun in, even on a gloomy day. 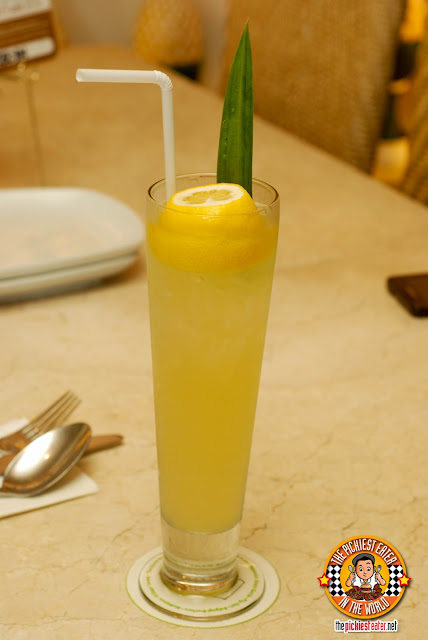 Rina couldn't decide whether she wanted to try the Lemonada Con Pandan (P120) or the Malunggay Citrus, so I told her I'd order the Lemonda one (I sure as hell wasn't planning on ordering the Malunggay). Rina took one sip of it, and loved it. Unfortunately for me, and fortunately for her, the citric acid of this was a tad bit too strong for me. If I forced the issue and drank even a few more sips, i'd be worried about an acid reflux. However I have to admit, once you get past the strong acid of the lemon, the soothing taste of the pandan hits the back of your throat as it goes down. 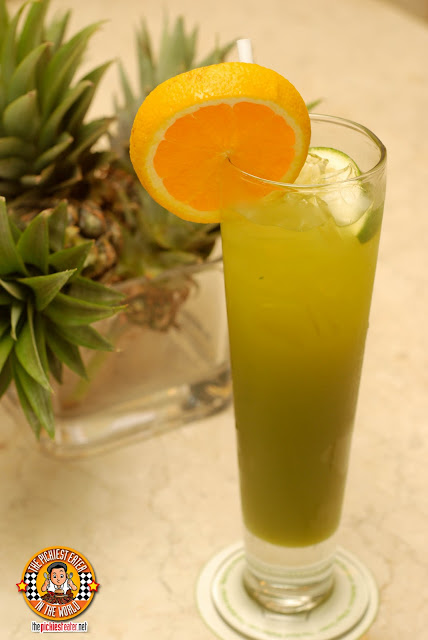 Though I gave Rina an incredulous look, she's been on a health trip as of late so she was adamant about trying the Malunggay Citrus (P165) as her drink. I don't even eat Malunggay in my food, so there was no way I was going to try it as a drink.. or so I thought. Rina's reaction to it got me all intrigued. She found it to be extremely refreshing and didn't taste anything like malunggay. I asked the manager, Geleen, what the ingredients were for this drink, and she said that it was a blend of Malunggay and orange. I honestly thought it was just malunggay that they put into a food processor, squeezed in a little lime, and "voila"!

I said, "what the hell" and took a quick sip. And I was surprised to find it to be quite refreshing. The citric acid was nowhere near that of the lemonada, but it did give the drink a nice sweetness. You could tell that the malunggay tempered the flavor of the orange a tad, but on the whole, you'd never guess it was malunggay. It was closer to a cucumber shake. I would still probably go for another drink before I order this, but it was at least something I could say I experienced and in fact, enjoyed. 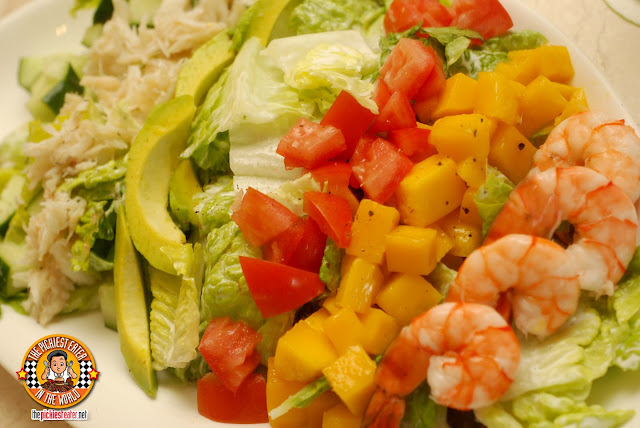 As Rina continued her healthy mode, she ordered the Pacific Cove Salad (P495), which is Stock Market Cafe's House Specialty. It was a rather large plattered, filled with stuff like plump shrimps, mangoes, tomatoes, avocados and shredded crab meat. As much as Rina enjoyed the medley of different flavors brought on by the freshness of all its components, she would have preferred it with a vinaigrette, as opposed to the "House Special Dressing", which was sort of like a very mild, creamy ranch dressing. 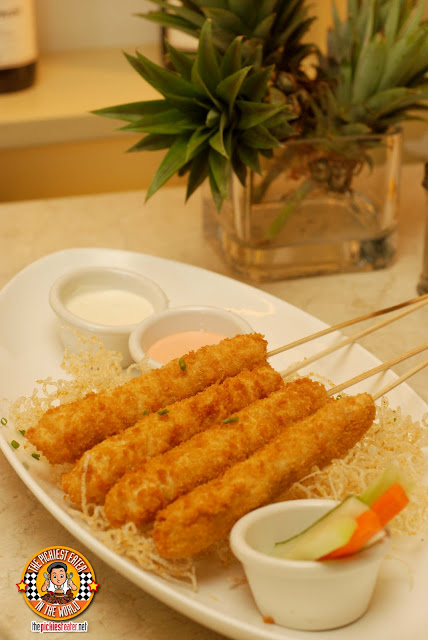 The Sassy Spring Rolls (P375), was a product of Rina and I compromising what our appetizer would be. It's an egg roll, that covered in a light batter, then deep fried to a golden perfect golden brown. Inside was a mixture of tuna, onion spinach, blended into a delicious cream cheese mixture. The sour cream dip was a perfect complement to the rolls as well. Rina also really liked the fried rice noodle that served as the rolls' bed. 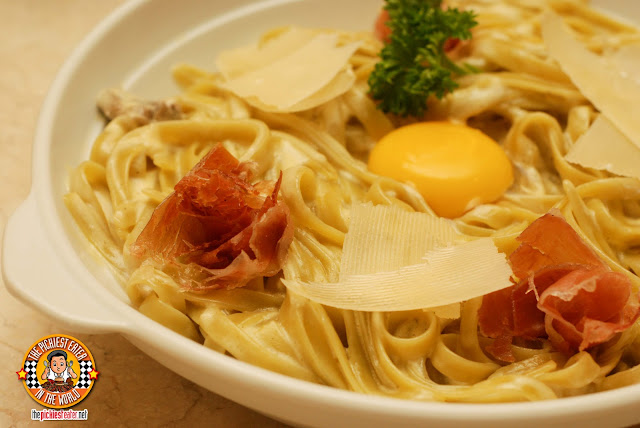 I was a bit intrigued by the Carbonara (P420) dish of The Stock Market Cafe. They replaced the bacon with Prosciutto, which is blasphemy in my book, but nonetheless I thought it was worth giving a shot. And Rina was happy that I did.

You're looking at the newest member of Rina's "Best Thing Ever Club".

After I mixed in the egg yolk of the organic egg, One forkful of this sucker and it was almost like she forgot she ordered anything else. It was rich and creamy, and the natural flavor of prosciutto gave the pasta a certain saltiness that Rina looks for in her food. 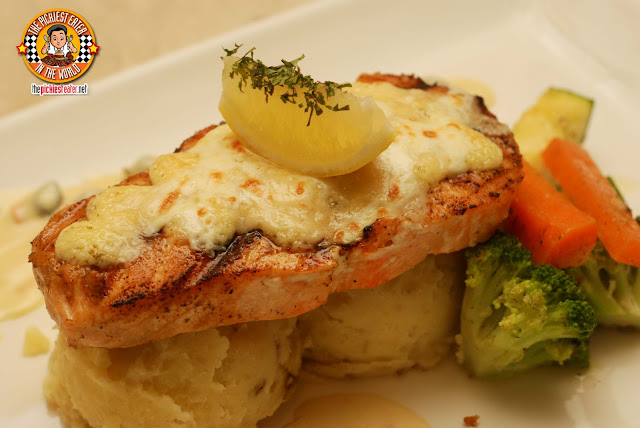 Rina decided she wanted Seared Salmon (P650), but this was before she commandeered my plate of Carbonara. It was a beautifully seared slab of filleted Norwegian Salmon topped off with thick cream sauce, that the menu described as "Caper Tomato", but I struggled to find the taste of either (Which was fine by me cuz i'm not fond of either of them anyway).

The Salmon laid on a bed of what was supposedly two scoops of "garlic mashed potatoes", but it lacked a garlicky kick to it. I think they should drop the "Garlic" part in the name and just call it what it is.. Pretty delicious mashed potatoes. 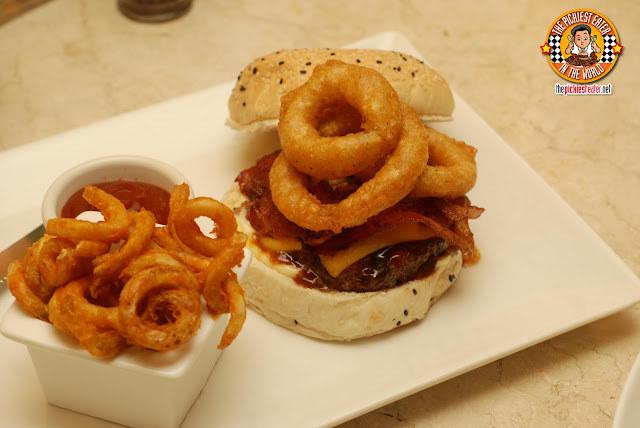 I've never hidden the fact that I'm a self confessed Burger addict. If you ask me to come up with my own burger, It would definitely involved first and foremost.. Bacon. Followed by Cheese. Then Onion rings. Splash in some BBQ Sauce, and i'm good to go.

Which is why Village Tavern's Cowboy Burger called out my name the moment I saw it on the menu (It was actually kinda creepy).

So when I really wasn't up for finishing off Rina's Seared Salmon because she had declared martial law on my Carbonara, I was more than happy to focus my attention on a burger instead. 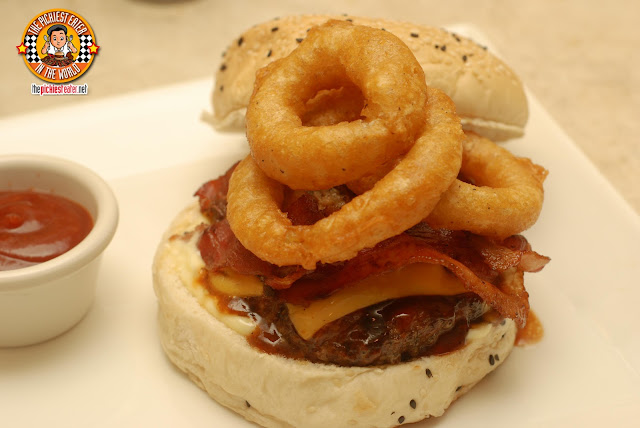 It would be safe to call The Stock Market Cafe's "Ultimate Burger" (P425) a close cousin of the Cowboy Burger. It's got the same components.. Maybe the bacon isn't as pimped up with Applewood Smoke, But the chunky hand battered onion rings were very impressive. It's also got a lightly sauce to it, which the menu states was "Mushroom Ragout".. Although I didn't recall seeing any mushrooms. It had a juicy, thick patty

That's what happens when i'm too busy stuffing my face with an awesome burger.

I'd definitely come back for this. 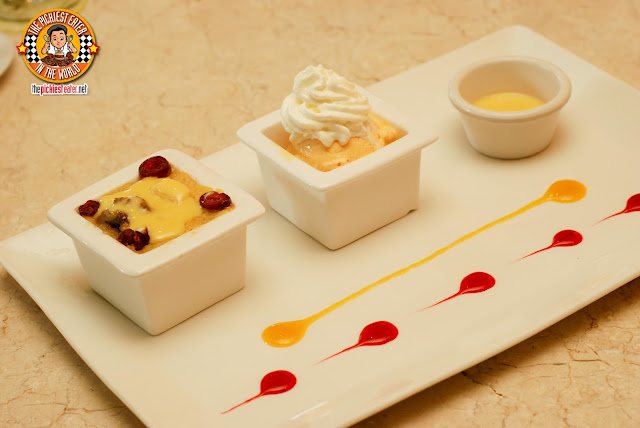 I had mentioned that in my first trip to The Stock Market Cafe, I was happy with the food but disappointed with the Desserts.  I asked the restaurant manager Geleen for her suggestion on what I should order, and she was firm when she said that she believed that there was no way I would be disappointed with their "English Style Pudding". 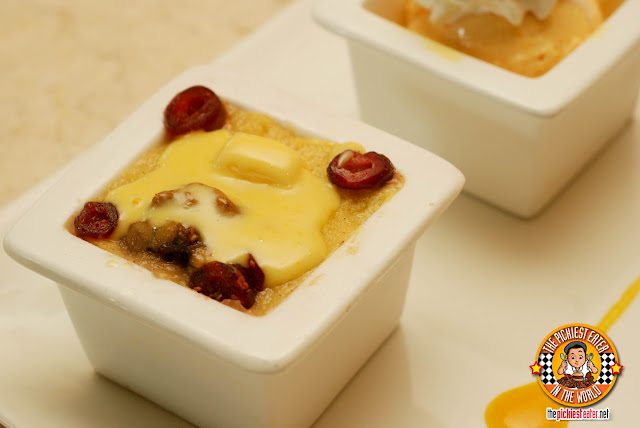 There's are many reasons why The Bistro Group hired Geleen. One of those reasons was because she knows her product. Because she was absolutely right.. I loved the English Style Pudding (P225).

It was a soft bread pudding, that was hot in the center. The pudding was peppered with pine nuts, candied raisins, caramel, and a bit of cinnamon, and doused in a rich cream sauce. After one scoop, I just plowed into this without a care in the world, leaving Rina in baffled, asking me, "Aren't you supposed to eat it with the ice cream?".

Oh right. Yeah, it comes with a side of mango ice cream, but truth be told, you won't need it. The pudding is incredible on its own. To me, adding the ice cream was sort of like "tampering" with it.

This was definitely worlds apart better than the other desserts of Stock Market Cafe that I tried in the past. In my eyes, the English Style Pudding helped redeem Stock Market Cafe from my initial underwhelming dessert experience.

The Stock Market Cafe is a bit pricey, but like all restaurants of The Bistro Group, you see where your money is going with the quality of the food, and efficiency of the service, and even to the ambiance. 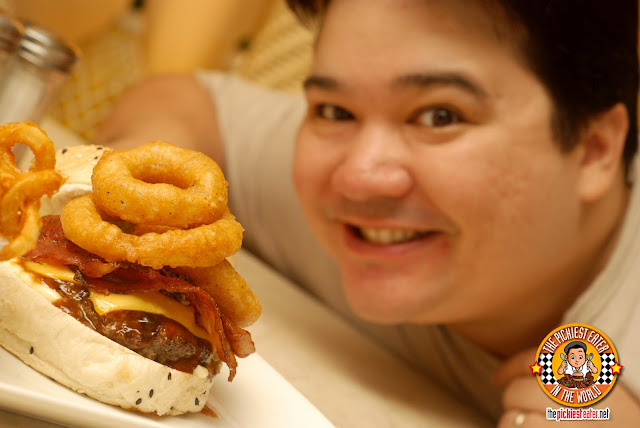 Ultimate Burger, I think this could be the start of a beautiful friendship.. 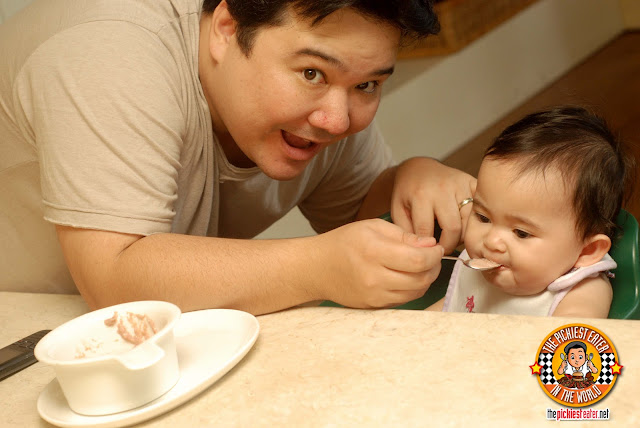 The sight of my burger got even Baby Rain Hungry! 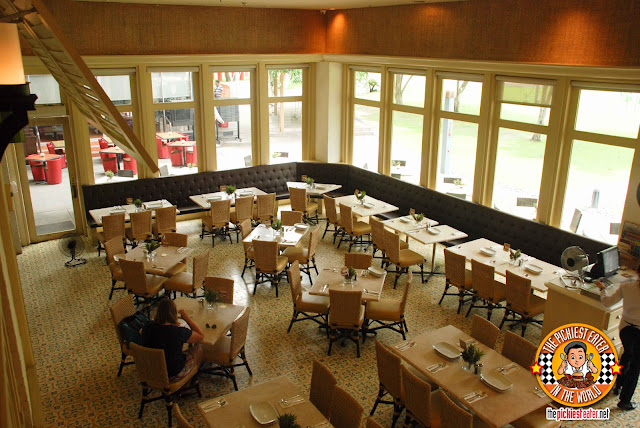 I love the huge picture windows! 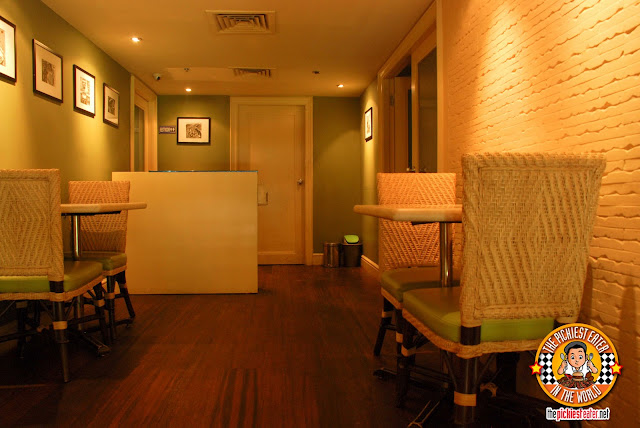 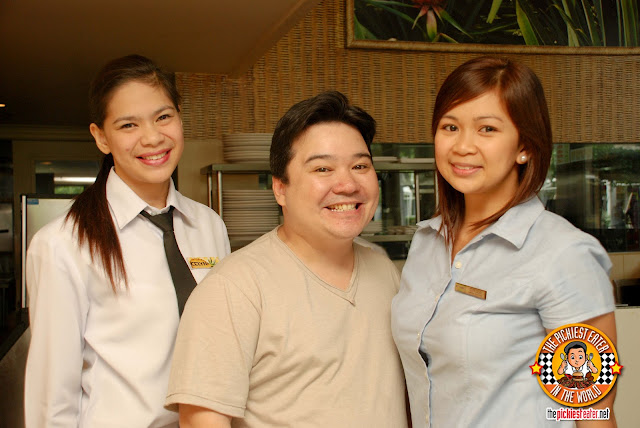 Our hostess Celyn, and Stock Market Manager Geleen
(Who can now be found at Krazy Garlik!)

Thank you for entertaining us! We had a blast! 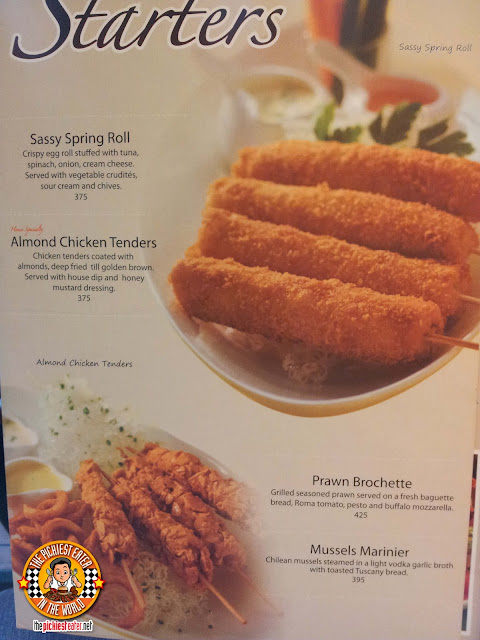 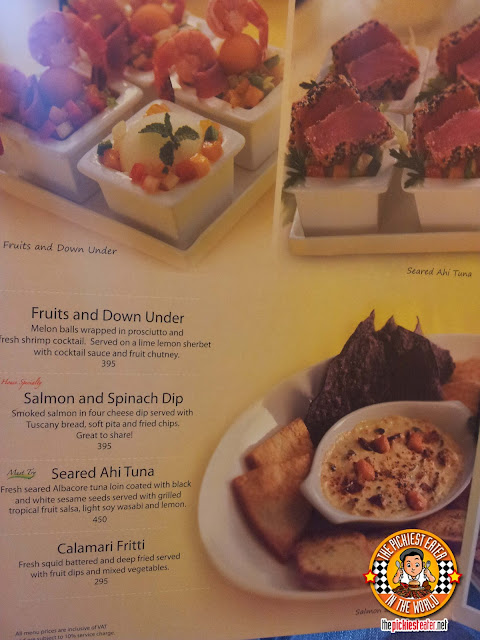 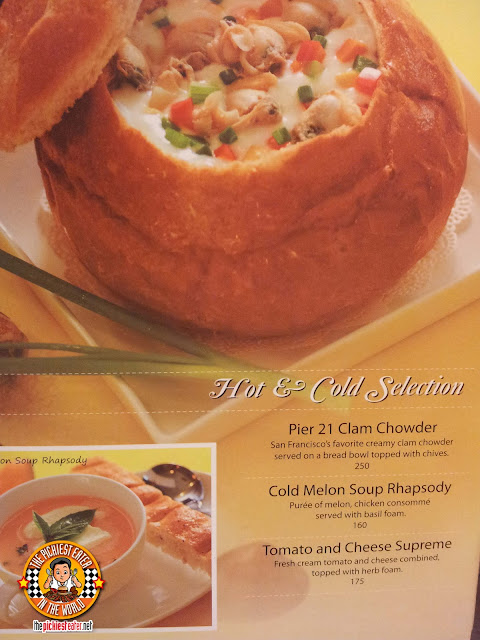 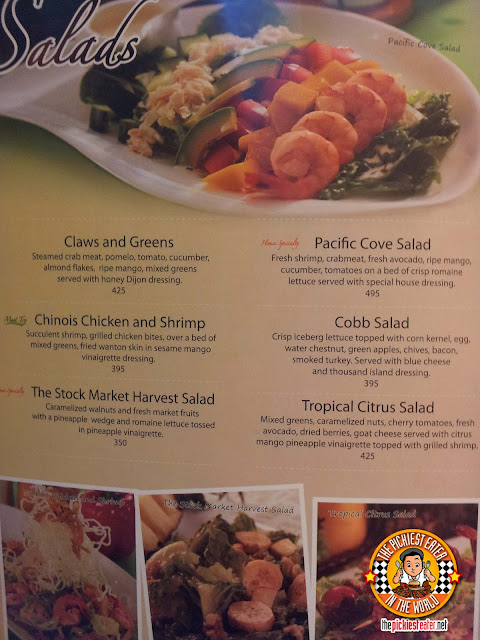 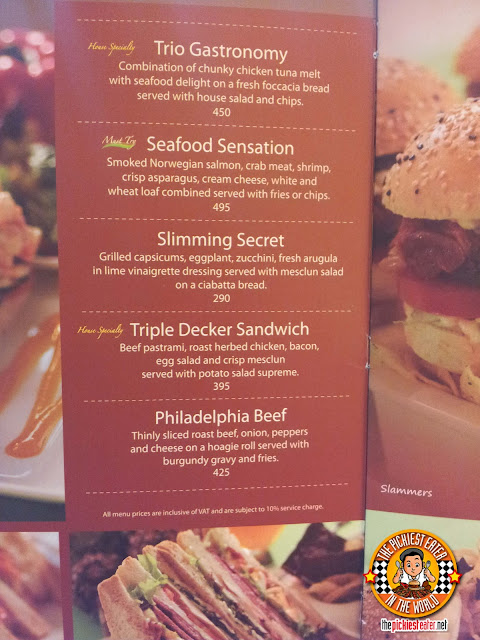 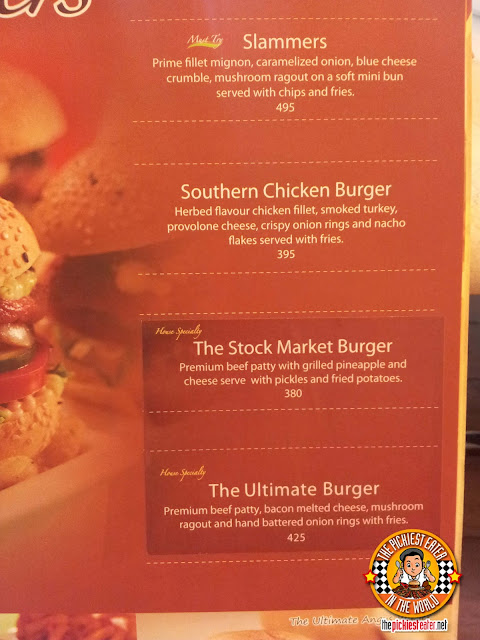 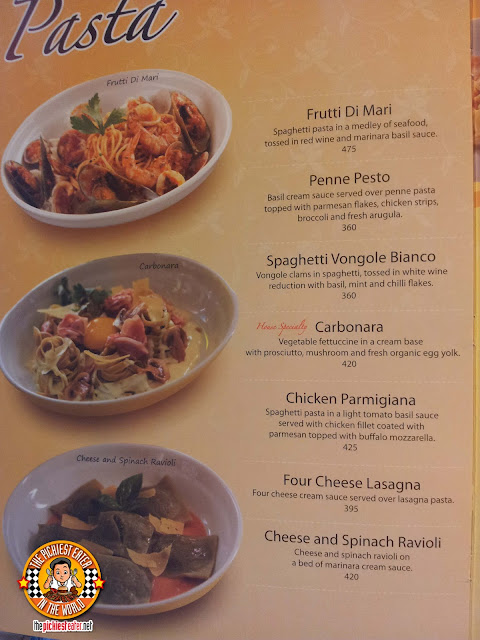 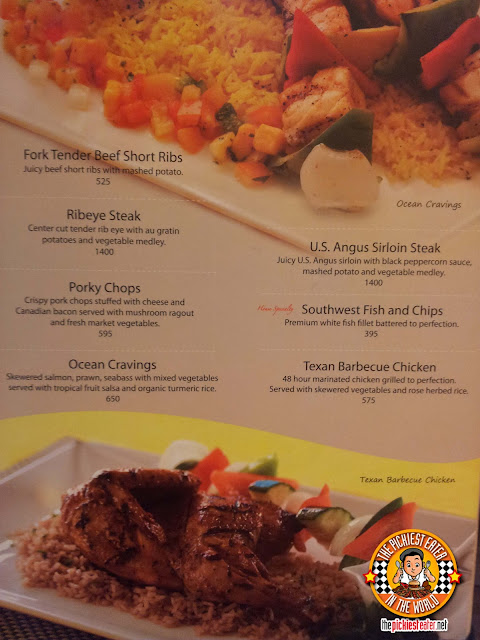 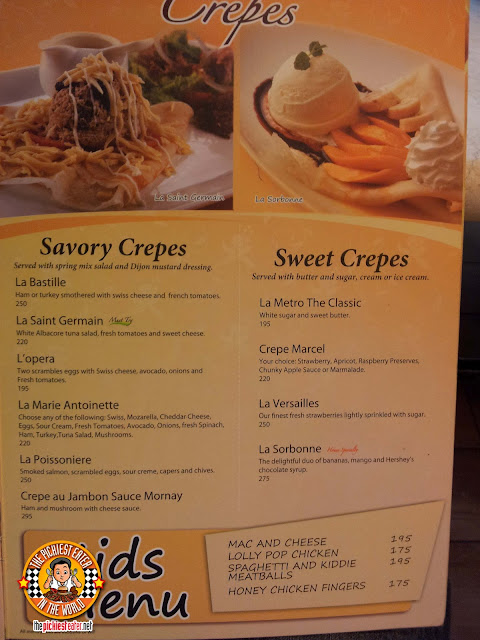 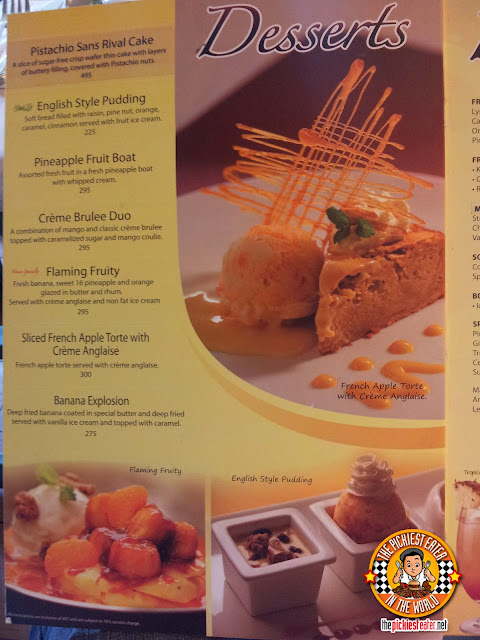 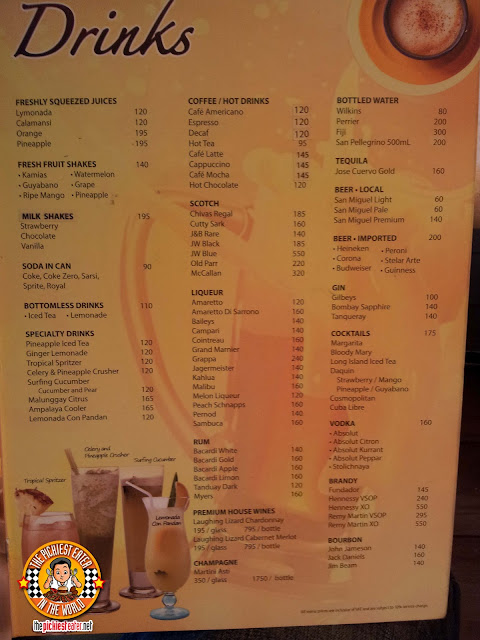 Posted by The Pickiest Eater at 10:53 PM