Perhaps my first post that features my own personal photography-
which apparently sucks.
(Rina had work so she couldn't join me) 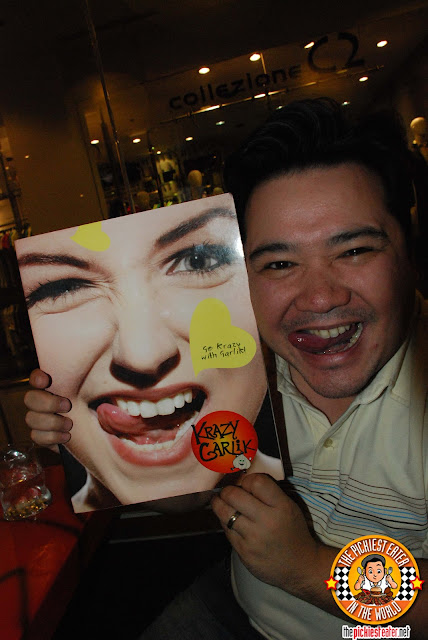 For some reason when I do it, it's not sexy. Not even a little bit.


One of my (many) Bosses', Marcus, invited me and my giant buddy Joel for dinner one night to help him out on a little project that he and and his Fiancee', Marjo are planning. Sir Marcus knows about my blog, so when he asked where we could meet, he said, "Where haven't you been to yet that you've been wanting to check out?" My being the shy type I am (believe it), I told him I'd be more than happy to go to wherever he recommends. Sir Marcus is also notorious for his love of awesome food (and funnily enough, instant noodles) so I trusted his taste.

I was actually really glad he suggested Krazy Garlik, because I've had quite a few people tell me I should try it, especially their Crispy Pata.  I was so excited when he said it, I don't think I even let him finish his sentence when I agreed. He kinda said, "Do you want to meet in Krazy Gar-" and I butted in and said "OK!!".

People have mixed feelings about garlic, but I'm fine with it. In fact, one of my favorite dishes (a member of my "Best Things Ever List"), My mom's Baked Dory in Olive oil, has toasted garlic as one of it's most important components. I was intrigued to see how a restaurant would use Garlic as the foundation of it's menu, which could work both ways. Either you want to try it, or you don't like garlic, so this would turn you off (*cough cough.. Rain..*cough cough*).

The good and bad thing about Krazy Garlik is that, although a great deal of their items and specialties are dishes that use amounts garlic that would make Dracula flee in terror, not all the dishes are garlic heavy, so it doesn't really alienate anyone. But the weird thing about it is, why call it Krazy Garlik then? 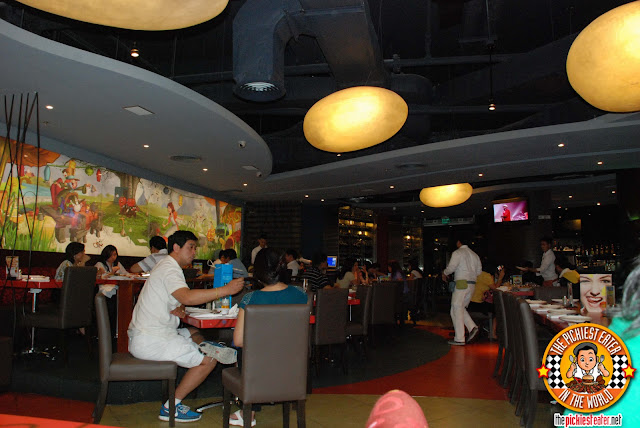 Krazy Garlik got my attention because even at what was supposed to be "Off peak hours", they seemed to be always full. Not to mention that the colorful designs, and foreign looking menu made it seem like an established international franchise (It's actually local.. I'll expound more later). The place didn't seem too much like a family restaurant for me, but more of a bar feel. But then again, I haven't been to a bar in ages so I may be wrong.

Everyone who has been raving about Krazy Garlik, has always recommended to me their "Krazy Garlik Crab". Which would have been fine if I ate crabs. Since I don't, I decided to go with the "Honey Fried Chicken" (Half 315.00, Whole 575.00). I enjoyed the sweet glazing on its skin, and how it had a nice crunch to it, with every bite. The chicken meat was seasoned perfectly, so even without the sweet flavor that the skin brought to the mix, the flavor of the chicken was evident. 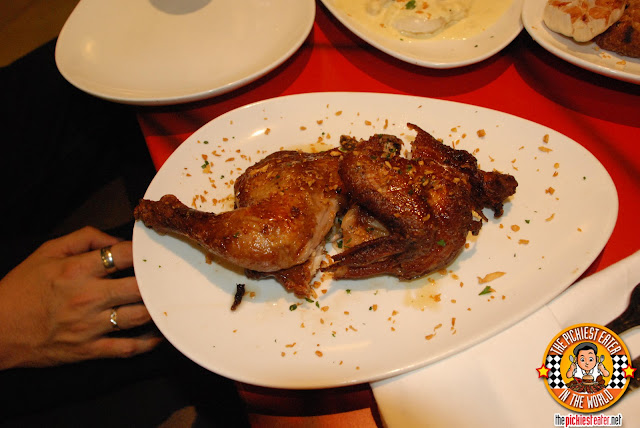 Apparently, it only held true for the dark meat parts (I ate the thigh). Sir Marcus didn't even touch the chicken breast anymore after slicing it, because it looked a bit too dry for him. Also, P315 could get you a whole chicken in a lot of other places, but here, sadly its only good enough for half. 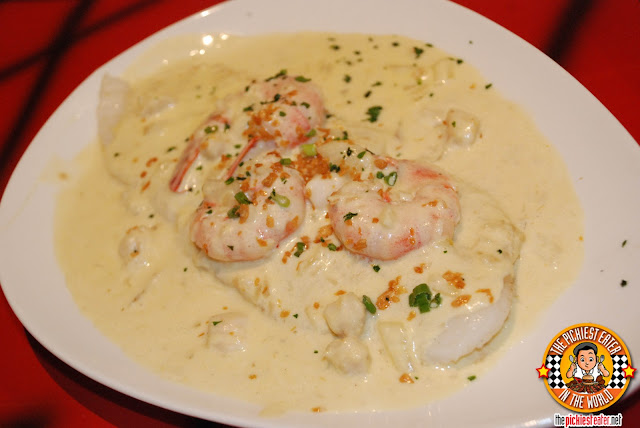 I'm not a very big seafood fan, but for some reason I could not resist the call of Krazy Garlik's Fillet of Dory Fish with Creamy Seafood (545.00). Whenever Sir Marcus would tell me to order whatever I wanted, my eyes kept going back to this. As mentioned earlier, I love Dory Fish and I love (almost) anything "Creamy" - and this did not disappoint.

Shrimp lovers will be thrilled with the big pieces of Shrimp on top of the fish (Although it was only three pieces, they were quite huge). The fish itself, was as awesome as I expected Dory to be. It was soft and cooked perfectly. But what brought this dish to the next level was the cream sauce. I honestly don't eat scallops, but with the sauce being as rich and creamy as it was, you won't have time to think about anything negative about this dish. In fact, I would be seen pouring the sauce over the other dishes we had ordered - including the Garlik rice! But at almost P600 bucks a dish, It made me wonder if the sauce had little bits of gold shavings mixed into it. 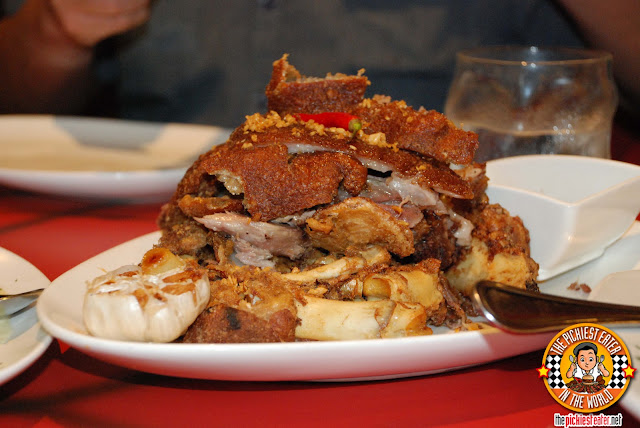 Four people could not take this down.

Sir Marcus took the liberty of ordering the Garlicky Crispy Pata (P595), something he had enjoyed during his earlier visit to Krazy Garlik. The strange this about me is, as much as I love pork, I'm not a big fan of it when it's deep fried. Crispy Pata, Lechon Kawali, Bagnet, etc., all those pork dishes don't really excite me the way others do (Yes, pork dishes excite me). There is one other Crispy Pata dish that I really enjoy, and I would put Krazy Garlik's Crispy Pata just a notch below that elite level. 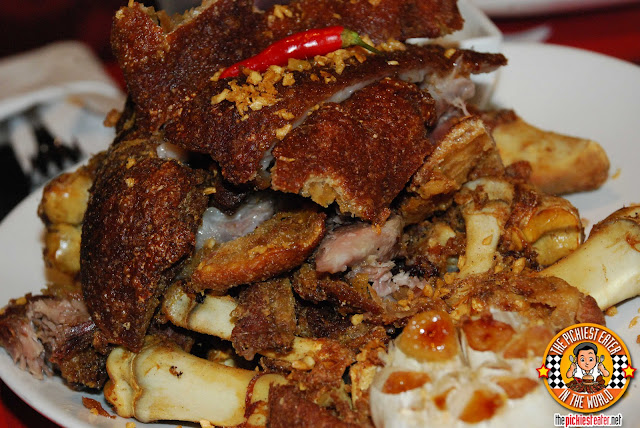 See the fat in the insides? Yum yum yum!

The skin, (usually everyone's favorite part of the crispy pata) was amazing. I loved how soft the fat laying underneath it just melted in my mouth. As I ripped through it, I couldn't help but notice how tender the meat was. Unfortunately though, it could have used a bit more seasoning to it, because the deep inner meat wasn't as flavorful as the outer meat. Sir Marcus mentioned that it was nowhere near as garlicky a flavor as he first remembered it. In fact, he resorted to taking out some of the garlic bulbs from the garlic placed on the side, and eating it with his meat, just to get the more potent flavor of garlic he was looking for. Still a good dish though, and definitely worth the price because of its sheer size. 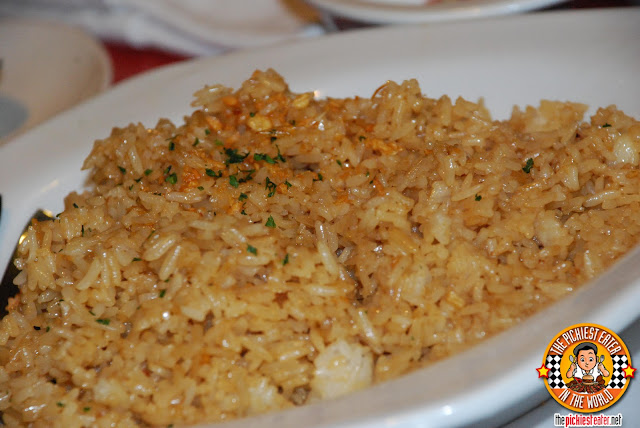 Giving a slight twist to a beloved staple


Oh, and last but not the least, the meal is best enjoyed with - what else? Their Garlik Rice! It was really moist and soft, and fried in soy sauce, yet it wasn't too salty.

I did enjoy dinner at Krazy Garlik , but I do think that the price was a bit steep (Even if I didn't pay for it). You do get value for money in terms of portion size for some dishes, but as a whole, i do find it a bit too expensive to go back to.

When I got there, I found out that Krazy Garlik is a member of the "Bistro Group". These people have impressed me and pissed me off at the same time. Impressed me because They've brought in such gems, like TGIF, Italinnani's and Fish & Co. to the country, and have conceptualized restaurants such as Pig Out. These people know what food is all about, and even their conceptualized restaurants could be mistaken for an International Franchise. Based on the design of the Menu alone, I thought Krazy Garlik was US based, and I still have no clue if Flapjacks is their concept or from abroad.

However, these people have some kinks to iron in their service - and not their restaurant service either.

I availed of their BFF card a couple of years ago, and till this very day, I have yet to receive the actual card (It expired July of last year I think). The card gave me a 20% discount at all Bistro Group restaurants, but sadly, when I asked for the actual plastic card which was promised to me, I never got it. Keeping a chunky piece of cardboard in your wallet doesn't look very sexy when paying for your date's meal (but I'm lucky I had my awesome body to compensate for that). Even repeated phone calls and emails to them did not get their attention, and going to the restaurant I bought it at, (Fish & Co.) wasn't any help at all either. They just referred me to their website. Since I didn't want to keep that ugly ass piece of cardboard in my wallet for another year, and disappointed that I never got the actual card, I decided not to renew my BFF card the following year. Which really is too bad because it was a great deal. But I still stand by my principles. They should treat their customers better than that. (Especially one that would go to Fish and Co., and FlapJacks as often as I would)

Sorry Bistro Group, you lost a valued one.


(Although I did eat in Pig Out a couple of months ago because I didn't know it was a member of the Bistro Group hehe).
Posted by The Pickiest Eater at 12:08 PM