BURGASM AT BURGERBAR IN GREENBELT! 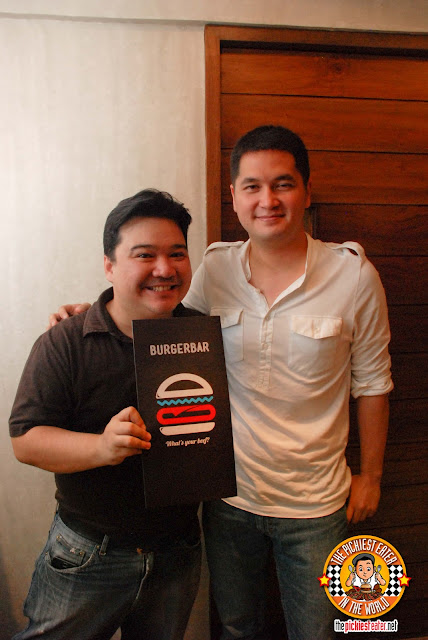 I'm not going to lie to ya... Being a food blogger is pretty awesome. For the first year of the existence of my blog, I would never accept any invitation from restaurant owners to dine at their establishment, simply because I was worried I would be pressured into giving a good review for a place I didn't like, putting any credibility I may have in jeopardy.

Things changed after Rina gave birth to Rain. After all the hospital expenses had been paid, It was clear that the shelling out of money that comes with having a child had only just begun. I came to a realization that one way to be able to sustain my blog and the financial demands of a new born baby, was to finally accept those invitations. So my New Year's Resolution as a blogger for 2012, was to begin attending blogger events and restaurant invitations. After the first couple of visits, I realized that my fears of being pressured turned out to be unfounded. For the record, every restaurant that has invited me have been extremely gracious with my comments, both positive and negative.

So through the course of the year, I've been incredibly blessed to have been able to sample the menu of some amazing restaurants. I probably would have gone to them on my own volition, but I undoubtedly would not have been able to taste the same number of dishes.

A couple of weeks ago, I got a very fascinating invitation. I'm grateful for every invitation that I get, but this particular one was rather different. This was a chance for me to dine at a restaurant and sample their dishes, BEFORE they opened their doors to the paying public.

And I don't want to sound arrogant or anything like that, but I think I was the right guy for the job. Why?

Because the name of the restaurant is "BurgerBar".

If you read my blog before, you know I'm a burger and fries guy, through and through. I don't need posh or superficial dish that requires some complex techniques to create it. Throw a beef patty on the grill, slap on some cheese, slip it into a nicely toasted soft bun, add a little bacon, and I'm a happy camper (Burgers should always have bacon by default). 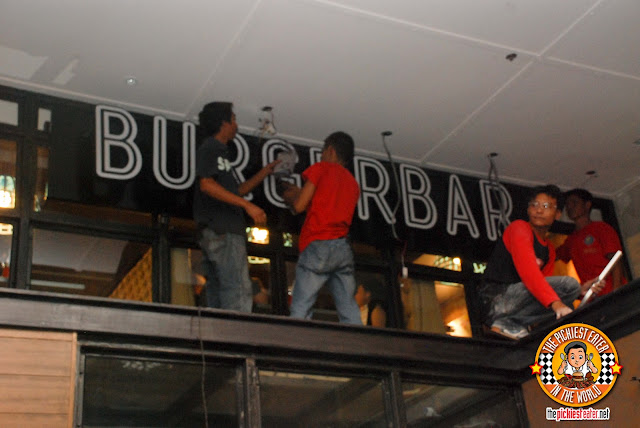 Which is precisely why I was ecstatic to be invited to BurgerBar's "Sneak Eat", which was scheduled two days before it opened to the public, on November 30, 2012. BurgerBar is the newest endeavor of The Movement Group, the brilliant minds behind one of my favorite restaurants, "Cue: Modern BBQ". The signage wasn't even up yet when we visited, making me feel like my visit was even more special (I have low self esteem, so sue me). 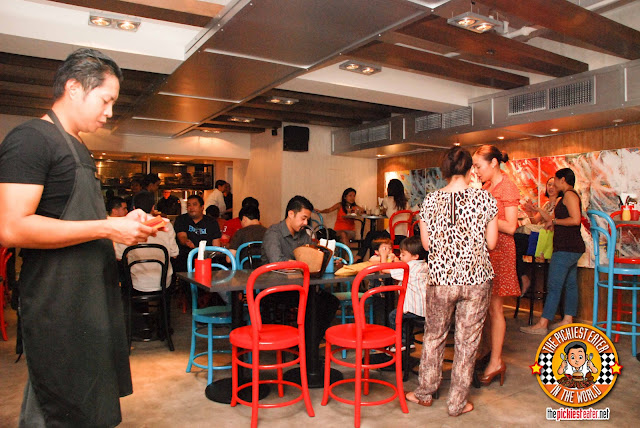 I was elated when my party and I (They let me bring three guests provided I went early, thanks Maita!) were greeted at the door by no less than one of the owners of BurgerBar, Mr. Jon Syjuco, who happened to be a high school friend of mine whom I hadn't seen in more than a decade (He looked exactly the same as he did in high school, except taller and thinner, while me on the other hand.. I'm much fatter and think I very well may have shrunk two inches since then.. FML).

The cool industrial interiors is adorned with graffitti like modern art, making it a rather hip place to enjoy your meal. Jon warned me that the kinks in the air-conditioning was still being worked out, but it would be ready by opening day. Since technically they weren't really supposed to be operational just yet, I didn't mind so much with those details.. Because I was excited to try the food!! 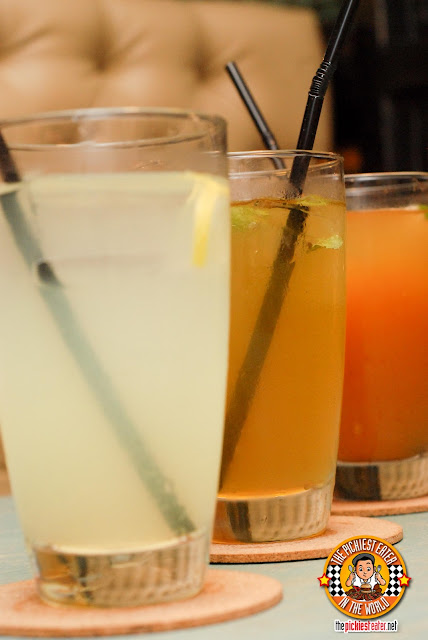 My buddy Jay had a Lemonade (P60), which he found to be very refreshing, while my friend Melvyn had the Iced Tea (P60), which he too enjoyed as a thirst quencher. My Giant, Joel had the Green Iced Tea (P65), and was quite surprised with how good it was. 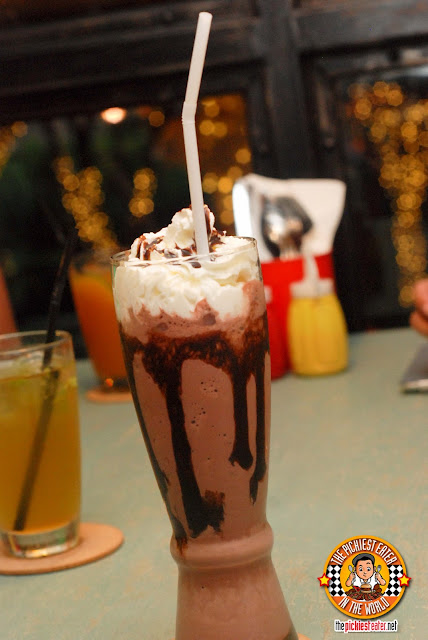 Me? I had a good old fashioned Chocolate Milkshake (P175). Nice mixture of chocolate Ice cream,whipped cream, and dark chocolate syrup which stopped the drink from becoming too sweet. After I had ordered, I realized that I should have ordered the more unique, "Salted Caramel Milkshake" instead, for a taste of something different.

Thankfully, my Chocolate Milkshake was delicious enough for me to not feel so bad about it. 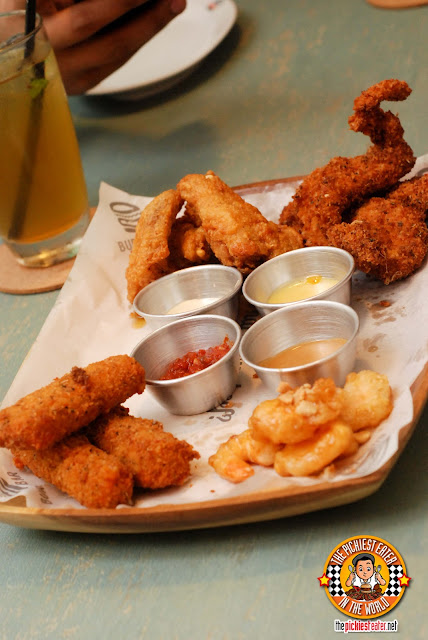 To kick our meal off, we were served a sampler platter from their "For The Table" (appetizers) menu. I don't think the platter actually exists on the menu, so this could have just been for that special night. 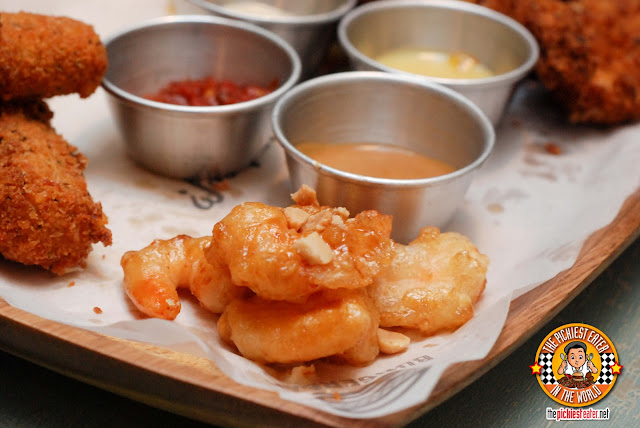 Watching the pieces of shrimp glisten under the warm lights made it evident that they were glazed with something. I wasn't exactly sure what, but despite the fact that I don't usually eat shrimp, I decided to give their Chinatown Rock Shrimp Poppers a try (P260). The shrimp was coated in a light batter with a sweet, possibly honey glaze to it, and was pretty darn good. Although I haven't had very much, this was definitely one of the better shrimp dishes I've had. 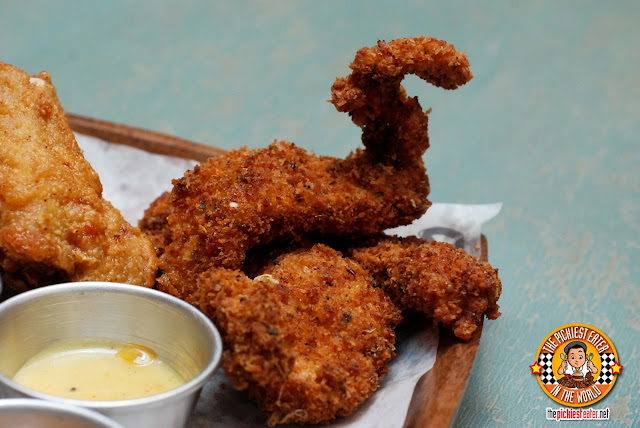 I didn't think that The Buttermilk Chicken Tenders with Roasted Jalapeno Ranch & Curried Mango Aioli (P290.. the name is a mouthful, ain't it?), wasn't anything truly standout at first. Although I immediately noted how the chicken itself was cooked nicely, leaving the outside crunchy whilst the inside revealed the pristine white meat of the chicken. It was when I dipped it into the Ranch sauce that I fully appreciated it, and found myself eating more and more of it. 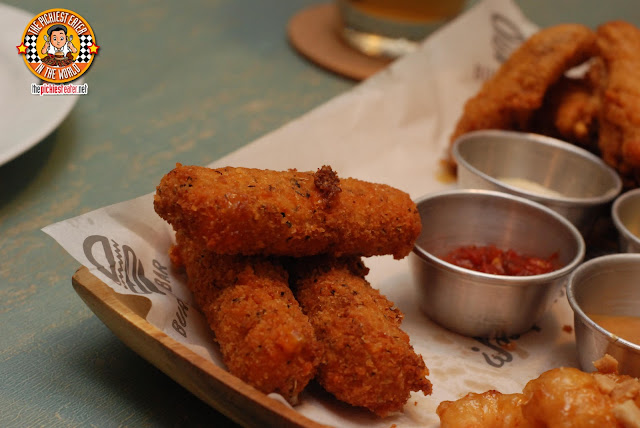 The Golden Cheddar Mozzarella Sticks (P225) were quite good, with its crunchy breaded exterior and flavorful melted cheese inside. As good as it was, it wasn't really anything outside the ordinary that you can get from other restaurants, although price-wise it was rather friendly. 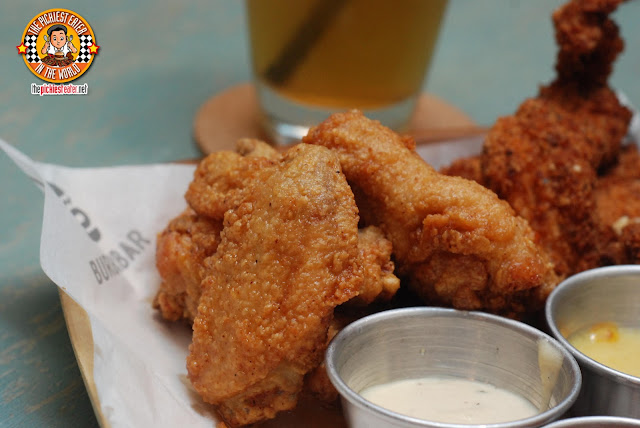 Something that I do believe you must try, was the Hot Fried Wings (P285).  As much as I am a big fan of Chicken Wings, I don't like Buffalo Wings at all. When I grabbed a piece of the wing, my attitude was more cavalier.. Something like, "Might as well since it's there..". My dislike for Buffalo wings is because of the strong acid flavor brought out by vinegar, an ingredient that I can't stand (If ever I order tapa or something that is usually served with a side of vinegar, I send it back or have it moved as far away from me as possible).

As I took a bite, my taste buds braced for that strong vinegar flavor, instead, my taste buds were pleasantly surprised that the chicken was coated with a mild acid taste. Jon explained that, despite what it looked like, it wasn't Buffalo wings at all. The secret was the use of fish sauce instead of Vinegar! Brilliant!

Something I forgot to Photograph was the Skinny fries, which was totally unremarkable. I had mentioned it to Jon, and he said it was something they were definitely working on, but the new fryer didn't seem to be cooperating with regards to temperatures.

But let's not forget, this is the same group that gave us the amazing sweet potato fries of Cue, so its not something I'm too worried about.

The Brilliance of BurgerBar, isn't just in its line up of gourmet burgers, but the way you can customize them. This is down from the type of bun you want, to even the burger patties. Though they have three types of Buns: Sesame Seed, Brioche and Kaiser, it's the patties that I found to be really quite impressive.

I have some ideas for the burger I plan to customize in my return, however since BurgerBar was still in "Sneak Eat" mode, my friends and I had to choose from the existing ones on the menu. 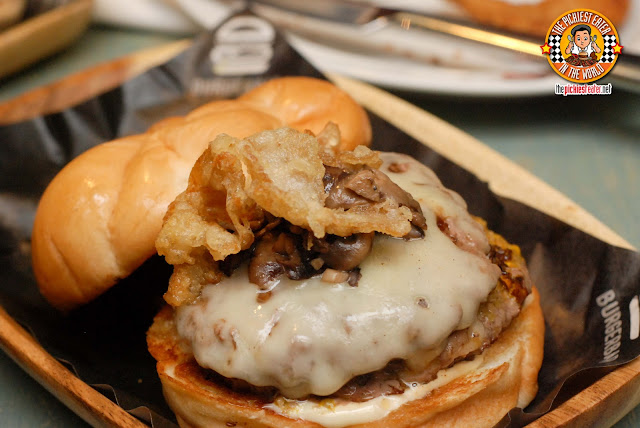 My buddy Jay did good by ordering "The "Rising 'Shroom" burger (P375 Double Patty/P280 Single Patty), which I found to be pretty awesome. I don't usually go for mushrooms in my burger, unless it's part of a "Bacon Mushroom Melt", but this was really quite exceptional. perched on the top of the burger was a deep fried "mushroom tempura", and the mustard fried steak cut patty was covered in a blanket of white truffle cream cheese. The Kaiser bun was quite amazing as well, and toasted to perfection. 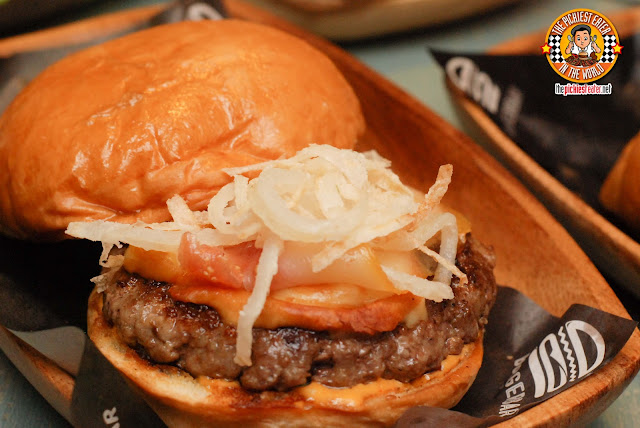 My Giant Joel, ordered the The Bar Burger  (P395 Double Patty/P290 Single Patty) , which featured an outstanding Game blend patty and a blend of Scamorza and Gorgonzola Cheeses on a buttery Brioche Bun. Laid on top of the beef patty is a beautiful slice of Prosciutto and two styles of onion rings.. Caramelized and Crispy. Their Sriracha Aioli sauce then gives the dish a nice kick. 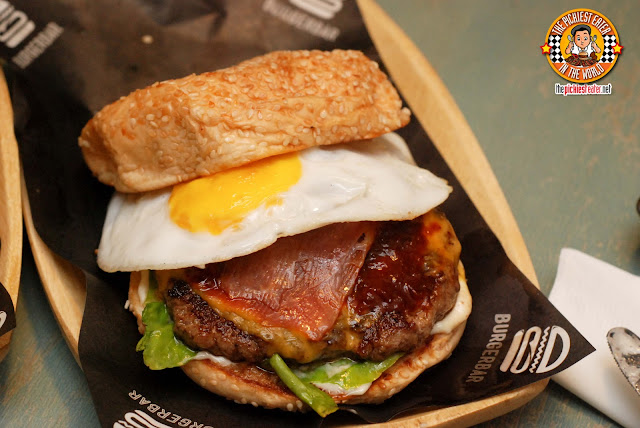 I love burgers with BBQ Sauce in it, which is why I was ecstatic that my friend Melvyn ordered "The Hangover Burger" (P370 Double Patty/P285 Single Patty). Apart from the BBQ Sauce, The Hangover also had The "Big Game" patty, and Prosciutto, with cheddar cheese and topped off with a fried egg all on a sesame Seed bun. The fried egg really balanced the different flavors of the burger together, adding a even more awesome dose of awesome. 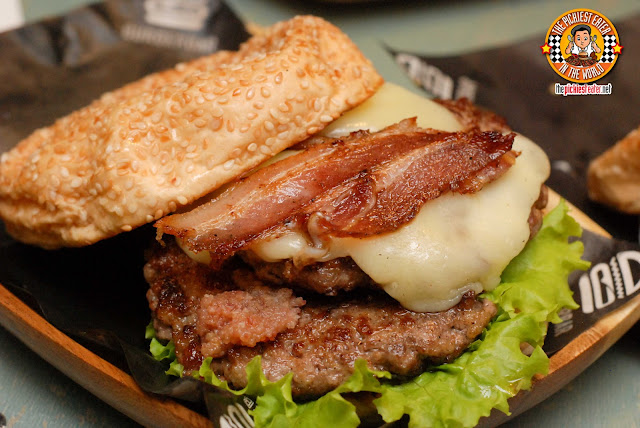 Before we got started, my friends and I agreed that we would all order different burgers so I could feature more items on my blog. I could see how heartbroken they were when I called dibs on "The Piggy" (P345 Double Patty/P245 Single Patty) without even reading the description (amateurs).

This is easily one of the best burgers you'll ever have in your lifetime.

I had a double patty of the "Beef Bomb", which was covered in mozzarella cheese, bacon, Garlic Aioli, and get this... some of their home made BACON JAM.

The bacon jam was actually really delicious, but I would have liked it to have a tad bit more sweetness so that you get a sense of it being more of a "Bacon Jam" than a "Bacon smush". But truthfully, comments like that are sorta like complaining that your diamond shoes are too tight.

Because the fact of the matter is, The Piggy was so good, It almost made me want to take it out to dinner and a movie (Anything except Twilight, of course). 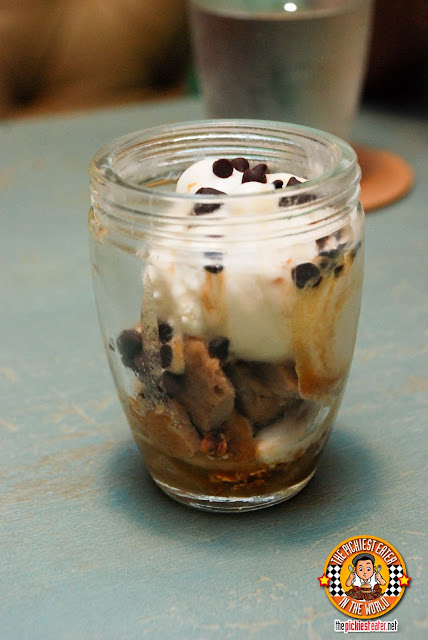 All desserts at BurgerBar are served in adorable little jars, giving it a bit of a rustic feel, including the Caramel Vanilla Bread Pudding (P135).

A little trivia for ya'll.. BurgarBar's Burger buns are the same bread used to make the Bread pudding. The bread is then spiked with dark Rhum caramel, giving it a more pronounced flavor. It is then topped off with Vanilla Ice cream and little chocolate chips. When you dig through into the bottom, you'll find the crunch of Granola, that had a touch of saltiness, and preventing the dish from becoming overly sweet.

This is something I would definitely come back for. 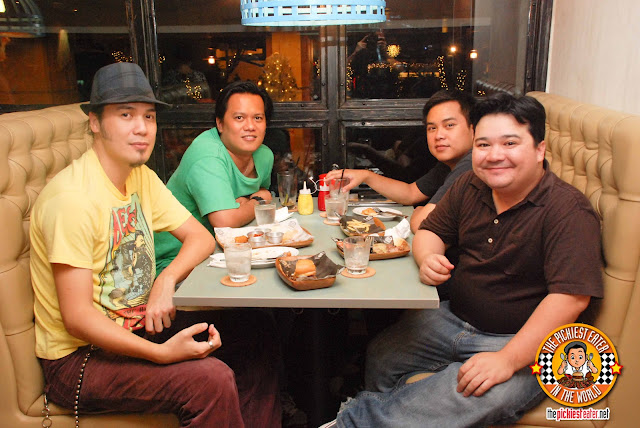 Considering my office is just down the road from BurgerBar, I think it's safe to say that they'll be seeing me again, very soon... and very often :)

I've been studying the photos on the menu so that on my next visit, I'm going to Customize my own burger, and it's going to be awesome..

I'm thinking of a cool name for it as we speak!! 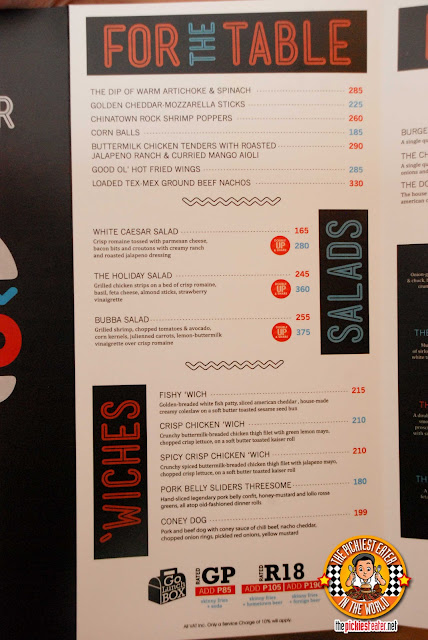 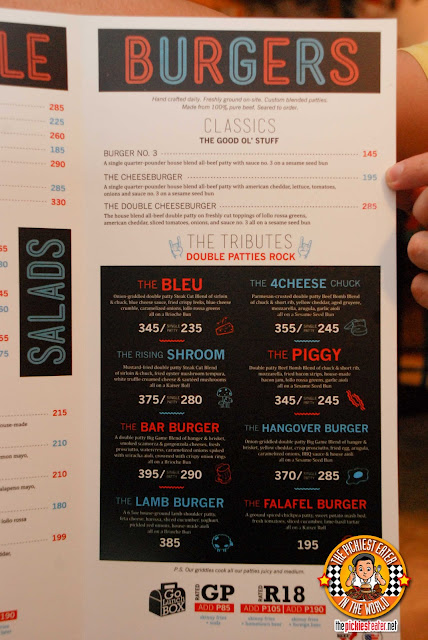 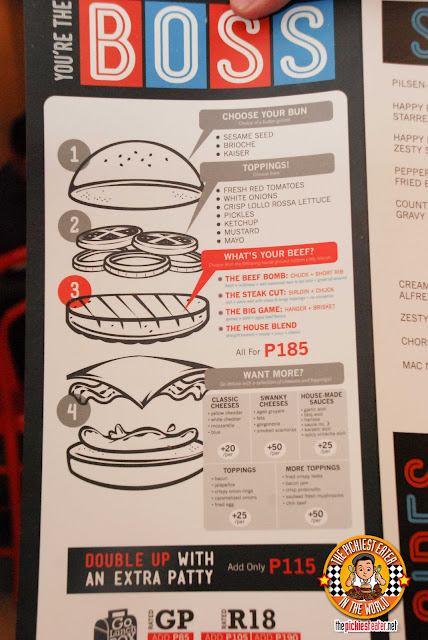 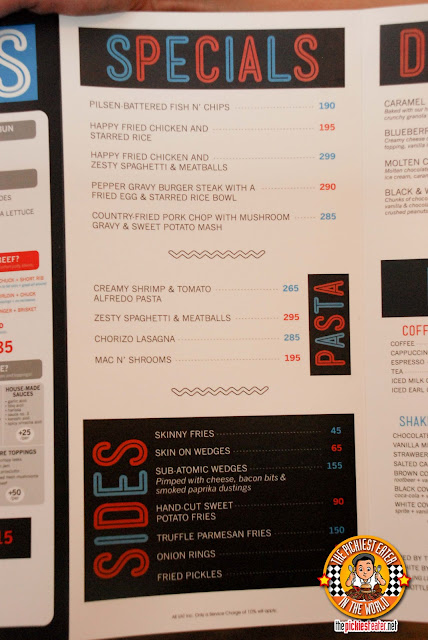 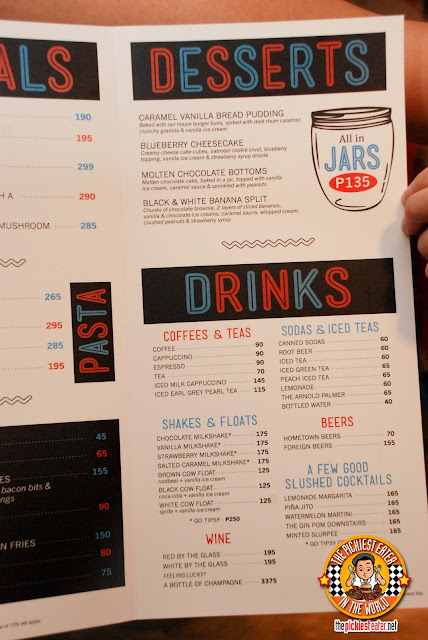 BurgerBar opened last November 30
Regular operating hours are:
12 noon to 1am on Sun to Wed
12noon to 2am on Thurs to Sat
Posted by The Pickiest Eater at 12:31 AM

Email ThisBlogThis!Share to TwitterShare to FacebookShare to Pinterest
Labels: Bacon, BurgerBar, Burgers, Chicken Wings, Dessert, Greenbelt, Makati, Moment Group, Where to Eat at Greenbelt, Where to eat in Makati