HUNGRY FOR SOME HOAGIES! 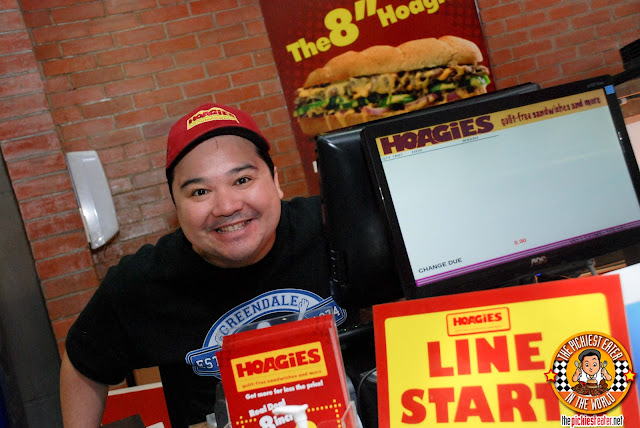 When choosing a place to eat at, Rina often needs to make it clear to me that she always NEEDS rice in her lunch and dinner meals. She never hesitates to remind me that, because she knows very well that because of my strong Western influence, I'm perfectly all right with having a sandwich for lunch. However, it's going to have to be a pretty bad ass sandwich. I'm not talking about a slice of ham and cheddar on Gardenia White bread. That's totally fine for an afternoon snack, mind you, but its not filling enough for me to consider it as a meal.

I'm talking about a large sub on a baked roll or french baguette, stuffed with different deli meats and cheeses (No veggies please, save for caramelized onions, of course)... Popularly known in the Philadelphia area as a "Hoagie".

Where could I find such a magnificent creation without having to travel all the way to the "City of Brotherly Love"? I'm gonna go out on a limb here and say, the restaurant "Hoagies" in SM North Edsa Annex would be a good start. 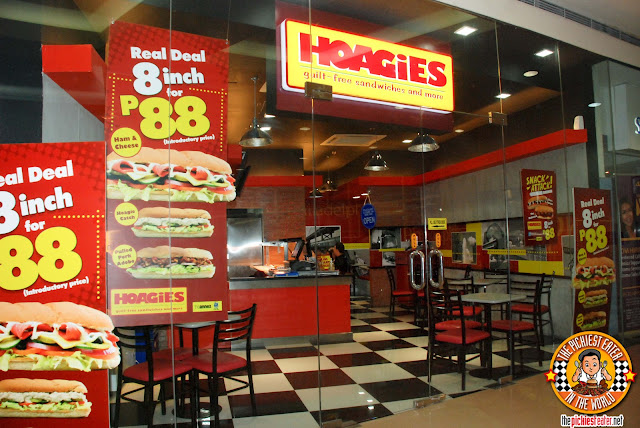 Whenever I think of SM North Edsa, the only place to eat that comes to my mind is Dimsum Break. No offense to the other restaurants, but that relationship goes all the way back to my childhood, and I've been waiting for them to come to Manila since I moved back here in 1995, so basically, none of the other restaurants ever stood a chance. But discovering Hoagies Guilt Free Sandwiches really has given me something to think about.

Including the SM North Edsa Annex Branch, Hoagies already has two other branches located at SM Southmall, and SM Fairview. With its affordable, delicious and not to mention sizable sandwiches, it's fairly evident why Hoagies has become a popular snack shop. 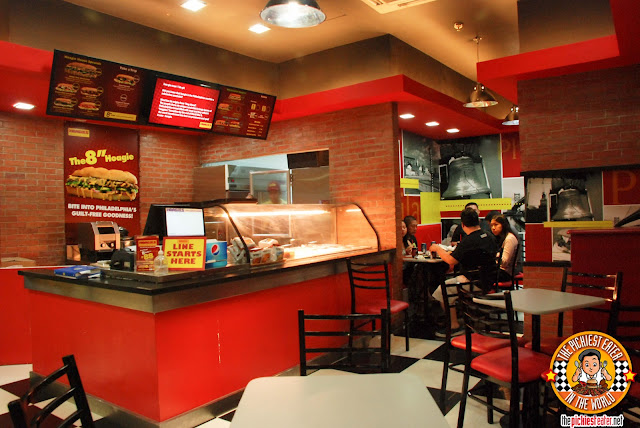 Hoagie's cozy space in SM North Edsa, that looks like a cross between a diner and a deli. Sandwiches are then assembled per order, right in front of your very eyes, so you get to see the freshness of the ingredients. 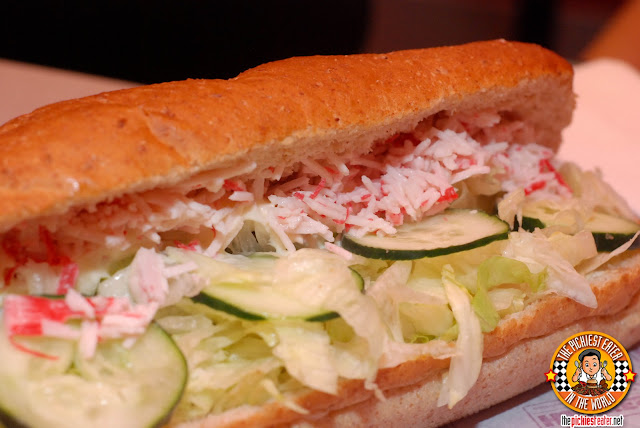 One of the other bloggers ordered The Classic Crab (P140) from the "Wholesome Hoagie" menu.. Which is good because that's something I would never have done if it was just Rina and me. I honestly didn't bother to try it, but Rina seemed to enjoy it, mainly because she really likes Japanese mayo, although she admitted it could have used a bit more crabstick. 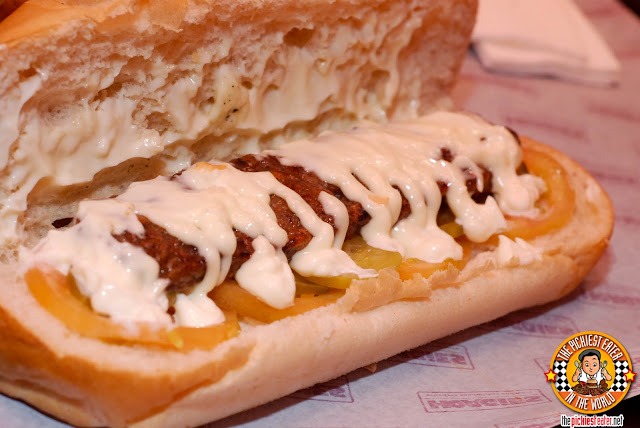 From their "Philly Meets Phil" menu, we tried the Chori Special (P130), which is a Hoagie-fied version of The Chori-Burger. Though I've got a thing for American meats I gotta say that I really loved this. In the future, I would ask for this without the bed of tomatoes, but you do have to appreciate how they didn't scrimp on their ingredients.

It was a simple sandwich of sweet Chorizo, with creamy mayo and Tomato, on a toasted Hoagie bun, but there was something distinctly Pinoy about it that resonated in my taste buds. 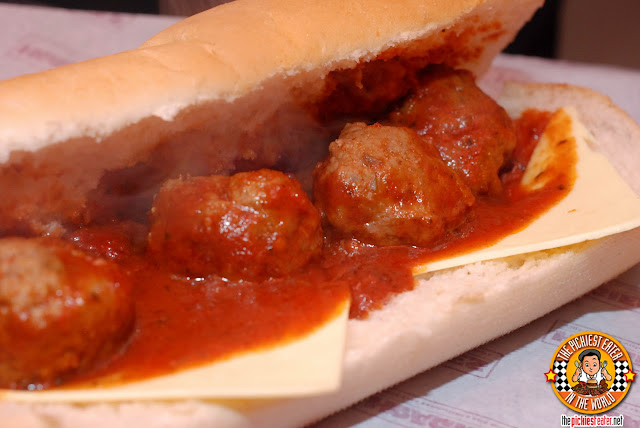 After the first two sandwiches, we felt it was time to move on to the heavy hitters on Hoagie's Menu, starting with The Rebound (P160). This meatball sub featured four plump meatballs bathed in a tangy marinara sauce and laid on a bed of cheese slices. Though I normally stay away from red sauce because of my hyper-acidity, the aroma from The Rebound was a bit too good to resist.

The meatballs were juicy and the acid on the sauce was just right. There was something comforting about the mix of the sauce and the cheese, but I must admit, I had hoped that the cheese had been a bit more melted. Other than that, it was delicious! 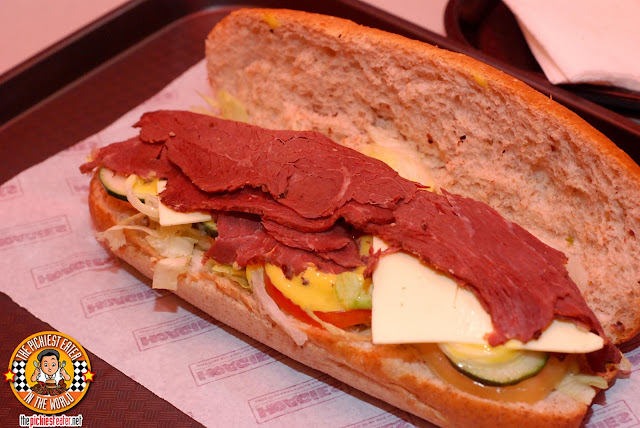 Since I was still on a high from my Katz's Deli experience, which featured the most amazing pastrami I had ever tasted, I was eager to try Hoagie's Zesty Pastrami (P155). It had a juicy slices of peppery pastrami, and garnished with a whole bunch of veggies, such as tomatoes, cucumbers and lettuce. 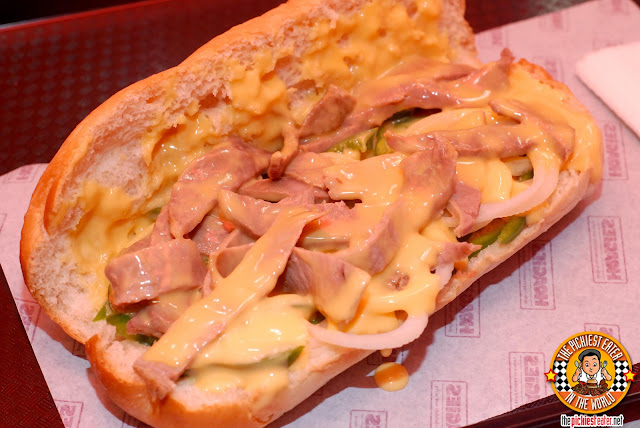 The crown jewel in Hoagie's Menu is their Philly's Fine Cheese Steak (P190). Tender strips of beef are sauteed in onions and bell peppers, then drowned in a thick cheese sauce. This was something that I could have annihilated myself if I wasn't with other pesky bloggers who was eager to taste it as well. 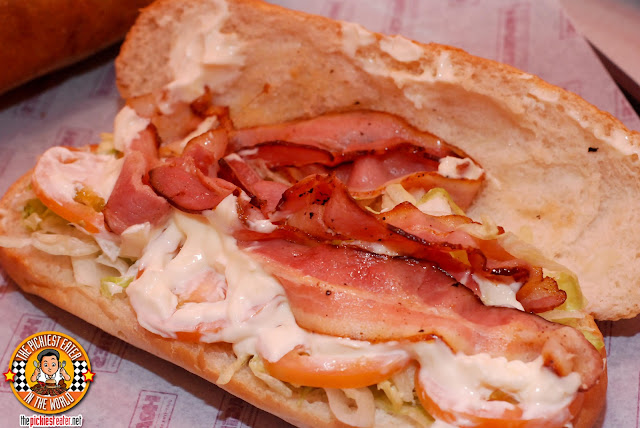 Good thing I had a B.L.T. (P120) to make up for it, right? Unlike other Bacon Sandwiches I've had in the past, Hoagie's BLT wasn't stingy with the bacon (Although for my standards, it could have used a few more strips). Bacon is the most integral part of any sandwich for me (Everything is better with bacon.. Words I live by). This ended up as a Simple Bacon sandwich for me because I took out the tomato, yet I didn't feel shortchanged at all. The bacon, was smokey, lightly sweet, and cooked well enough so it's not too soggy, without being too dry. 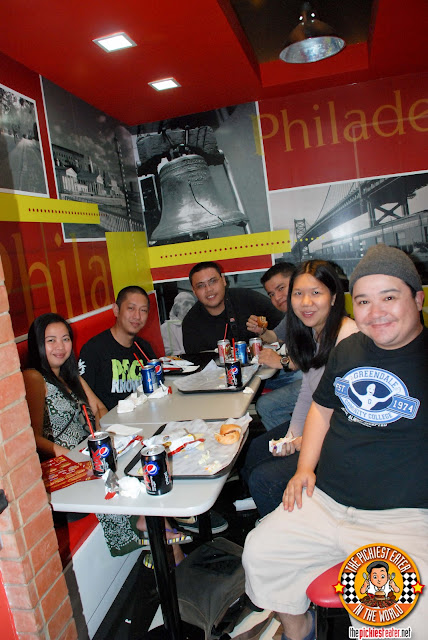 Me and my Blogger Buddies
Can you guess who's who?
Winner gets a prize
(Other bloggers, you're not allowed to join :P)

Something I look for in a restaurant is delicious food at reasonable rates. And with sandwiches such as the Chori Special, the Philly's Fine Cheese Steak, and the BLT all under P200 bucks, I think Hoagie's fits that bill perfectly!

I can't wait to go back to try their Pulled Pork Adobo and Backyard Roast Chicken! 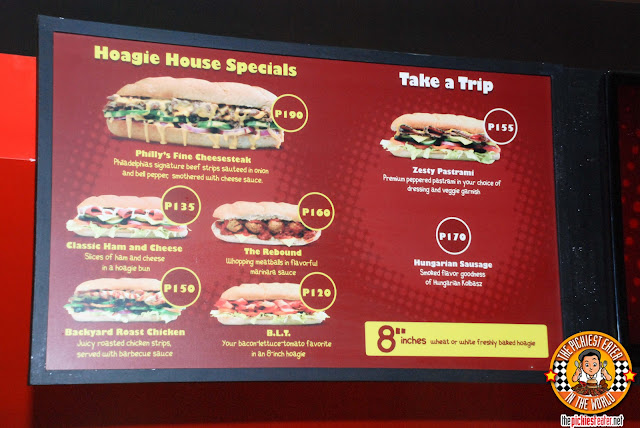 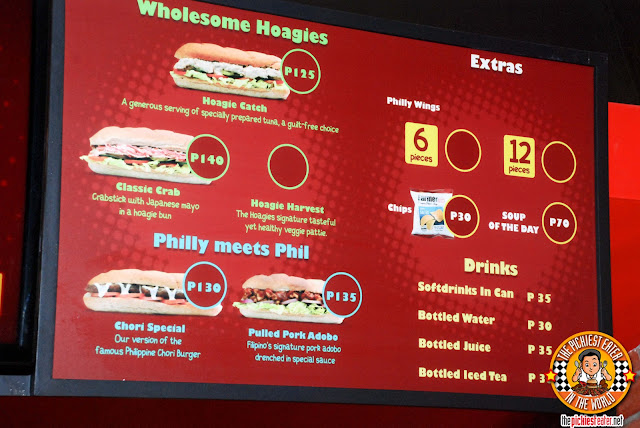 Posted by The Pickiest Eater at 11:50 PM