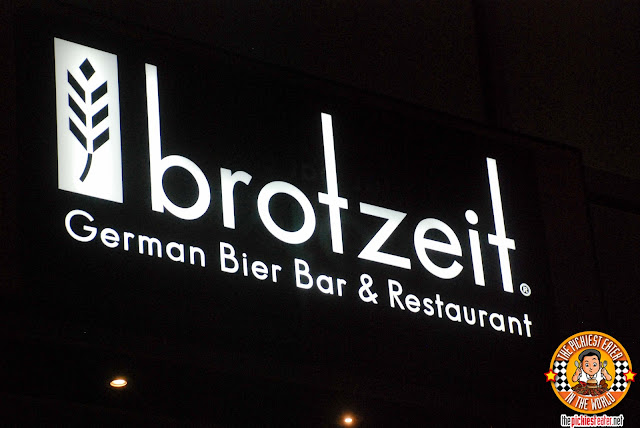 One of my best friends in High School, Thomas, was a German national. His father was an expat, and his mother was a home maker, and they settled in and made the Philippines, Cebu in particular, their second home. During my High School days, it was usually me that was doing the hosting of sleepovers, but there were a couple of times that I crashed at Thomas' house after a night of.. umm.. As much as I would love to say "hard partying with some hot chicks", it was more like "A super cool night of Dungeons and Dragons".

Something I always looked forward to, was breakfast in Thomas' house. Thomas' mother, always made sure that despite the fact they were living in a country so different from their birthplace in so many ways, their original culture would not be forgotten by her son. And she did so in simple ways - one was their food.

Sure, after hanging out with us, Thomas got the hang of eating rice with every meal, but at home, when his mom would prepare breakfast, It would be the good old fashioned German way. I was treated to an array of sliced sausages that I had never tried before, different types of breads, and a whole slew of cheeses to choose from, all served up on wooden boards. That was a mere glimpse of how amazing German Cuisine could be, but ever since then, their food kept me enthralled.

There aren't very many German restaurants to choose from here, so hearing about Brotzeit German Beir Bar & Restaurant opening in Manila brought music to my ears.

(Cue in "99 Luft Balloons" here.. Sorry that's the only German song I can think of right now). 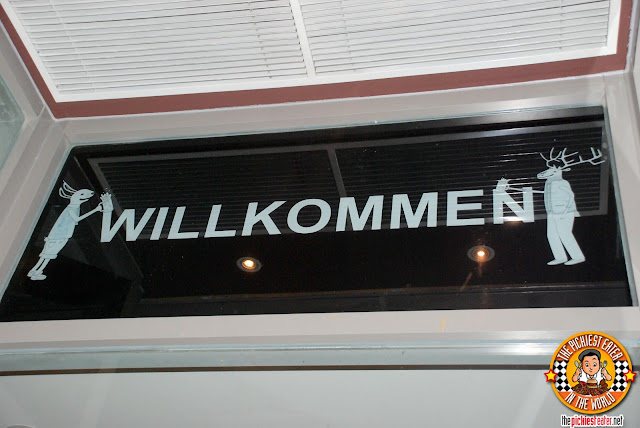 German ingenuity (or is it laziness?).


They found a way to say "Welcome" and "Come In" at the same time.

Brotzeit actually began their operations in Singapore, and has steadily made their way around the region, to countries such as Bangkok, Vietnam, and Hong Kong. 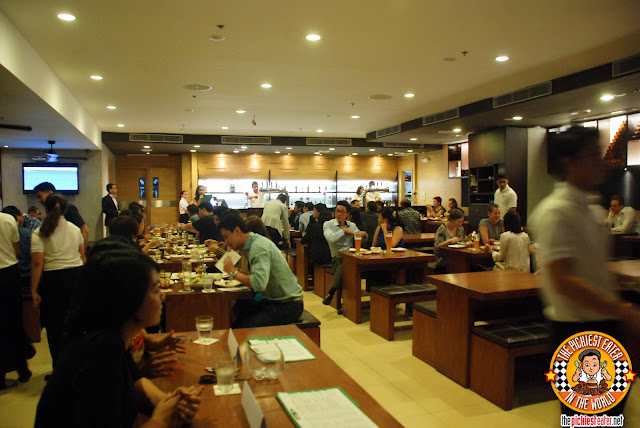 Located at the Ground Floor of Edsa Shangri-La Mall, the Brotzeit was filled with tables and benches, making like a simple, yet elegant Dining Hall, where Germany's gift to the world, "Oktoberfest" could be held. (Unfortunately, there weren't any hot Fräuleins in bar maids outfits walking around.. shucks hehe) 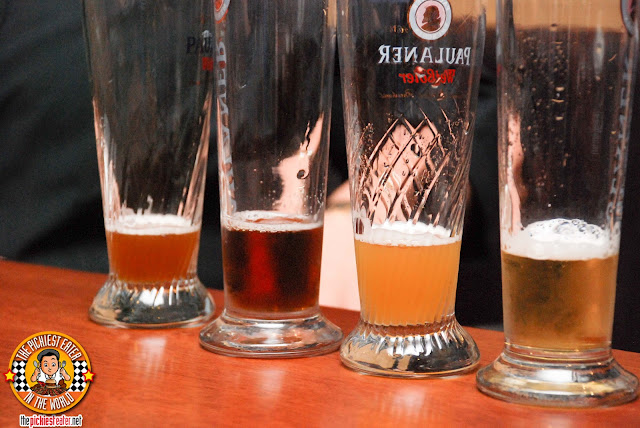 I never really got the hang of beer or any form of alcohol for that matter. I'm a dork like that (Dungeons and Dragons, remember?). But my blogger friends seemed to be more excited about Brotzeit's wide selection of German Beers than the actual food (Even my buddies over at Lynne-enroute.com, who normally can't go to blogger events outside Makati on Weekdays, found the combination of "beer" and "mall" too good too pass up hehe).

I'm very sorry but I really didn't get much info on the Beers, although I know I heard the name "Paulaner" often (Does that ring any bells?). 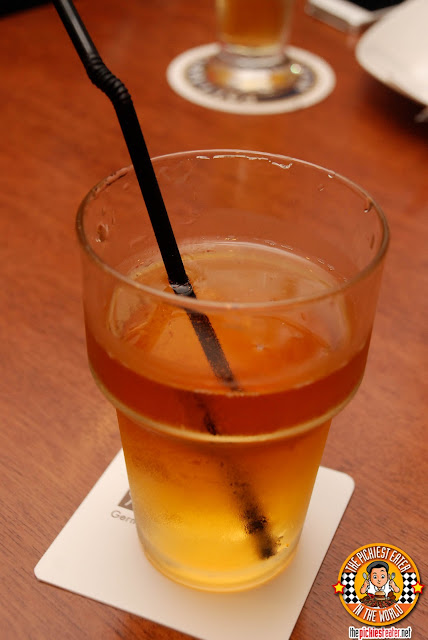 Since there was a lot of eating to be done, Rina and I felt it would be safer for us to stick to the Apple Juice.. which is refreshing and delicious.

Practically everything in the menu, I had to pretend to cough while saying its name to the waiter. 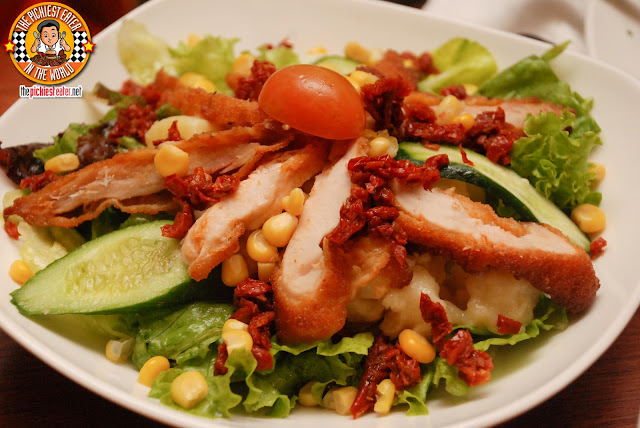 I'm going to make a little confession. I really enjoyed the Backhendlsalat aka The Crispy Chicken Salad (P295 Small/P495 Regular). I'm aware that it is, a salad, but if you scrape away the lettuce and cucumber, what you have is potato salad, sprinkled with corn, and topped off with delicious strips of chicken. 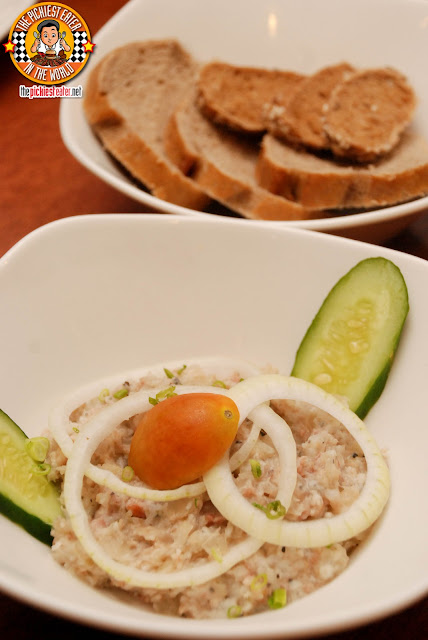 I was really excited to try the Griebenschmalz (P290)
, which was dubbed by everyone as the "Bacon Spread". The bacon was minced with a medley of apples, onions and some other herbs, and mashed into a spreadable texture. 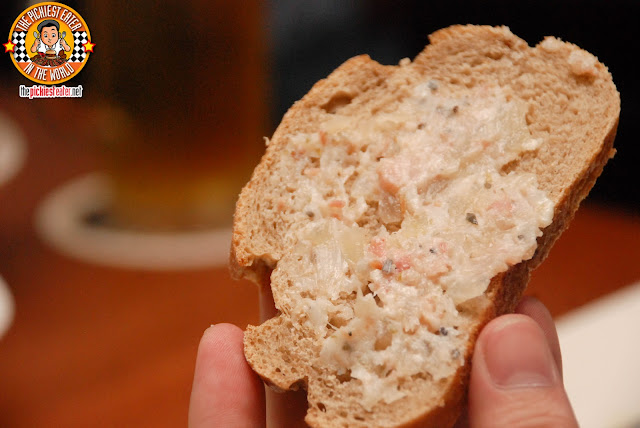 It had a distinct, yet familiar herbiness that I couldn't identify, that really appealed to my taste buds. I actually liked it, although I felt it could have used a bit more smokiness of bacon. If this wasn't labeled "Bacon Spread", I'd be all over it, but since I was really looking for bacon, my expectations were higher. 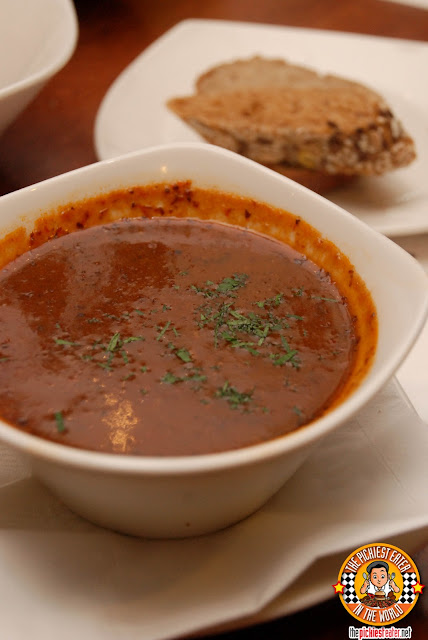 Someone in the table ordered the Gulaschsuppe aka the Spicy Beef Goulash (P270)
and I've got to admit, the aroma of the soup smelled delicious. It was a stunning mix of Beef and potato in spicy tomato base, that packed a nice amount of heat into it. 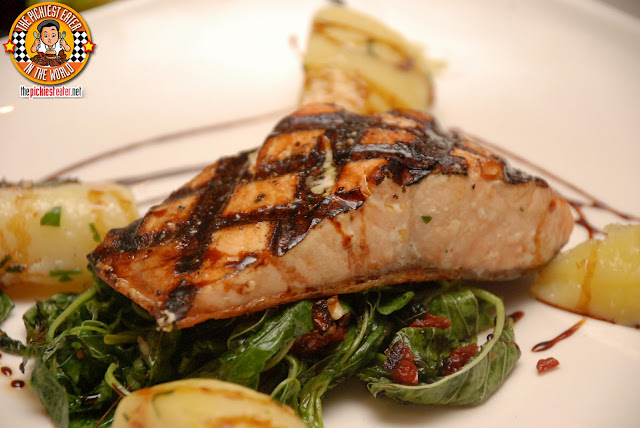 Another person at the other table ordered the Lachs (P650), which was a grilled Salmon fillet. This was an immaculately grilled salmon with gorgeous char marks on its meat, and laid out on a bed of sauteed spinach with a balsamic glaze and parsley potatoes on the side. 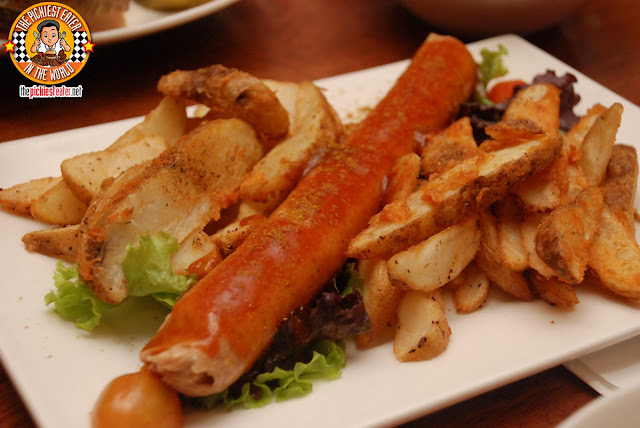 I really loved the Currywurst (P430), which was a Curry Pork Sausage, perched on top of a bed of crispy potato wedges. Make no mistake about it.. Brotzeit has some of the best sausages I've ever tasted. The sausage was soft, with the skin giving out a juicy snap with every bite. The unmistakable flavor of curry heightened the savory flavor of the sausage, with the potatoes serving as the perfect side order to the dish. 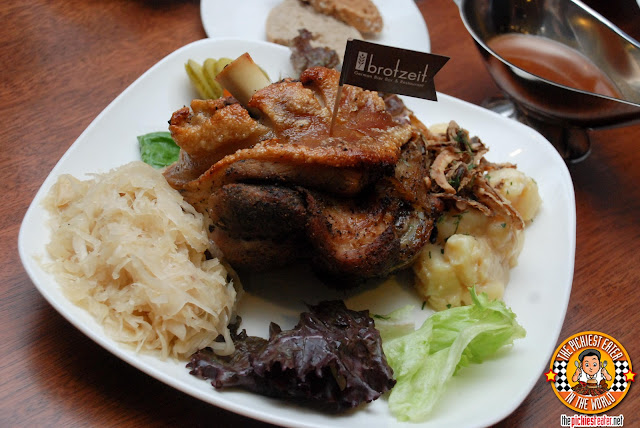 The big daddy of Brotzeit is without a shadow of a doubt, their Schweinshaxn (P1,280). I honestly have absolutely no clue how to pronounce it, but its essentially Pork Knuckle (Think of a German Crispy Pata). It's quite pricey, but it can feed around 5 people (depending of course who those five people may be). Perhaps the most baffling thing about this dish was that the shank of pork had hardly any traces of oil on it. It was explained that the knuckle isn't deep fried, but baked until it the skin gets a glorious crispiness to it, eliminating the oil that everyone seems to be so finicky about.

The skin was absolutely phenomenal, but I found the meat to be a lacking a tad in seasoning. Perhaps the acid on the sauerkraut was supposed to augment it, but I don't eat sauerkraut. Perhaps a few pinches of salt, or pinoy style toyo would have done the trick. 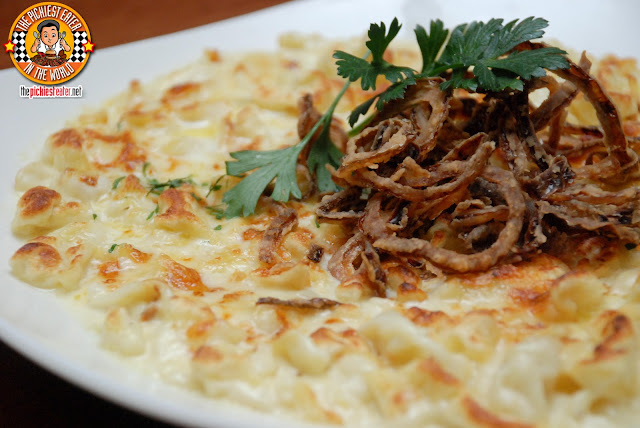 I scoffed when our friend Dreaming of Dinner, who was attending the launch as well, suggested we order something from the vegetarian menu. I thought she was insane. But the urgency in her voice made me think that she was really on to something. When she explained that the Cheese Spatzle (P580)

was essentially just their version of Mac & Cheese, which of course, caused Rina to automatically shoot her arm straight up into the air and yell to the waiter, "One Cheese Spatzle Please!!".

I'm gonna go all out and say it.

This is the best Mac & Cheese I've ever had.

It was simply amazing. There was a symphony of flavors brought about by the medley of cheeses the macaroni was topped off with, swarms your senses. The creamy flavor of the macaroni and cheese is further punctuated by the crispy onion strings topping, which I wish was available on its own as well.

This is by far the best thing I had that night.. I remember, I had just polished off a crispy hunk of pork, and some juicy sausages.
DESSERTS
The desserts weren't anything mind blowing in my opinion. Its almost unfair though, because my brother is a world class baker, so my standard is much higher. 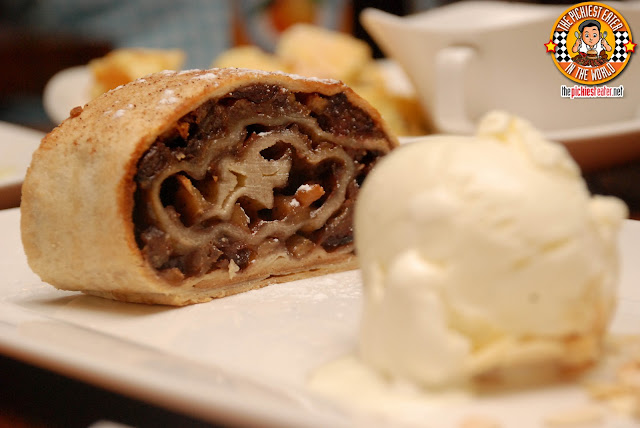 The Apple Streudel (P280) was just all right for me. Wrapped in a light dough, a mixture of tasty apples and cinnamon melded nicely with the Vanilla ice cream it came with, but the wrap may have been a tad bit dry for my liking. 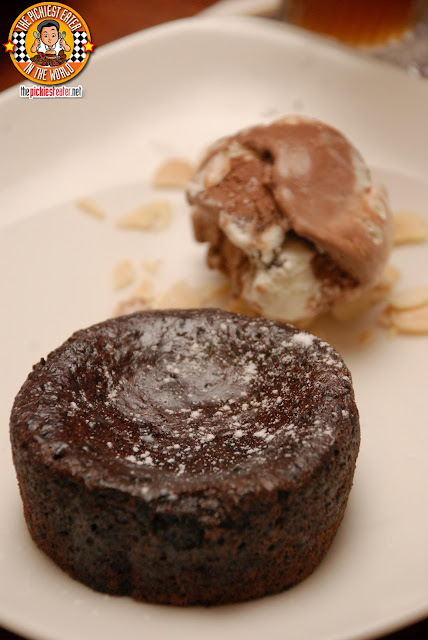 My brother makes the best Chocolate Cake (P270) in the universe. If you wernt to school in UP in the early 2000's and you know about OZ Cafe, then you know what I'm talking about. This was actually a delicious version, but the center wasn't gooey enough for me, making it fall short in comparison to the one that I'm used to. Although I've got to admit, when you mix it with the Straciatella ice cream, it does kick it up a notch. 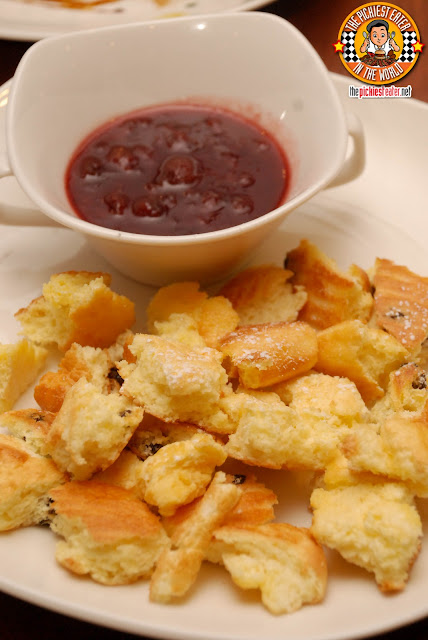 I wasn't a huge fan of the Emperors' Cake (P350), which was bits of pancake with rum and raisins served with a plum sauce on the side. The pancake was a little dry, and not much flavor to it, and the sauce was a little too tart for my liking.

Wonderful ambiance, delicious food.. I'm definitely coming back for that Spatzle, and I want to try their other sausages, especially the cheese! Also, My buddy Tales from the tummy said their Bavarian Pork Ribs were delicious, so I've got my eyes out for that as well! Admittedly, prices are a bit on the steeper side, but the quality put into the dishes are undeniable. 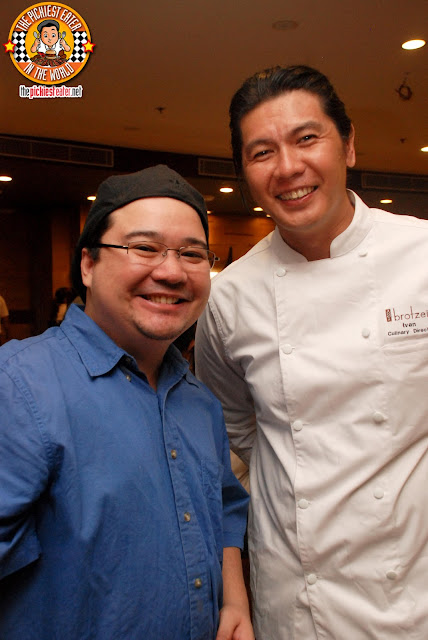 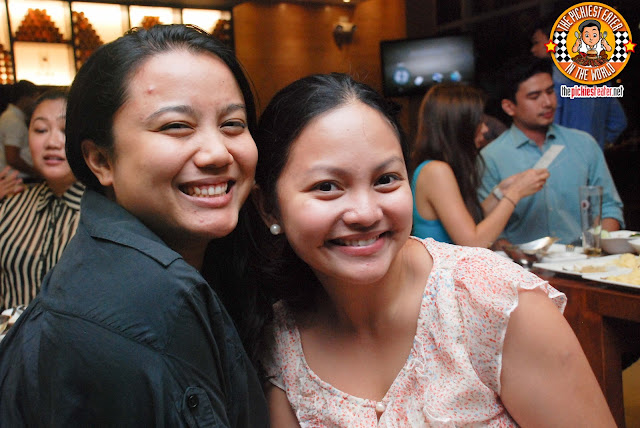 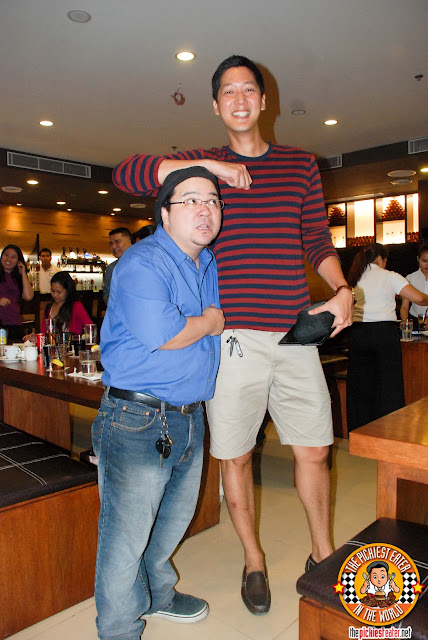 Being bullied by Chef Angelo Comsti 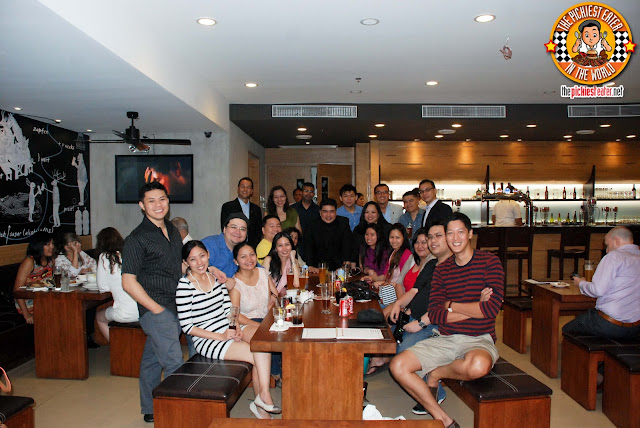 Thank you to the wonderful people behind Brotzeit!
It was an awesome night wth my blogger/writer buddies!


Oh and word of advice.


When you get caught up with all the toasting of glasses, please remember the German translation of "Cheers!" is "PROST!".


I accidentally mistook the exclamation point for an "I".


The lady I tried to toast glasses with nearly threw her drink at my face when I yelled "Prosti!" at her.

Posted by The Pickiest Eater at 6:31 AM

Email ThisBlogThis!Share to TwitterShare to FacebookShare to Pinterest
Labels: Best Thing Ever, Brotzeit, Edsa Shangrila, European Food, German Food, Mandaluyong, Ortigas, Where to eat at Edsa Shangrila, Where to Eat at Ortigas