SEEK YOUR SOLACE IN ONE GREENBELT HOTEL 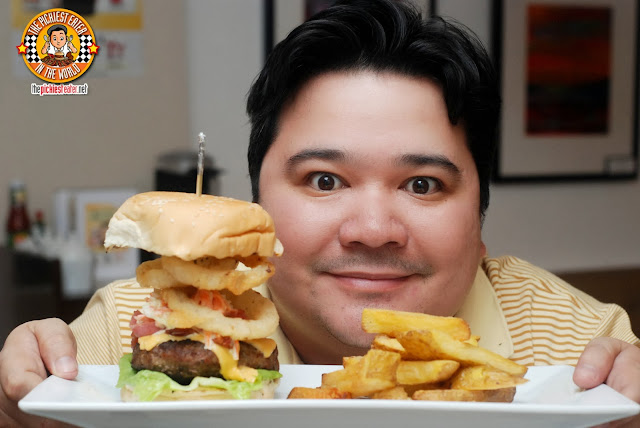 I don't know if I mentioned this before, but I left my job of six years a couple of weeks ago. Though I'll definitely miss the people that I worked with, One of my biggest regrets would be not making the most out of the amazing places to eat along Arnaiz Avenue. There were several excellent restaurant in the neighborhood, such as Nihon Bashi Tei, The Cheese Steak Shop, and Hai Shin Lou, all of which I had the pleasure of dining at more than once.

I would sometimes think to myself how nice it would be to be able to afford to dine at every single one of these restaurants one by one before I left. One of those restaurants was Solace Wine and Dine at One Greenbelt Hotel.

Someone upstairs must have been listening, because just a few days removed from my last day of work, I found myself walking through the doors of Solace. 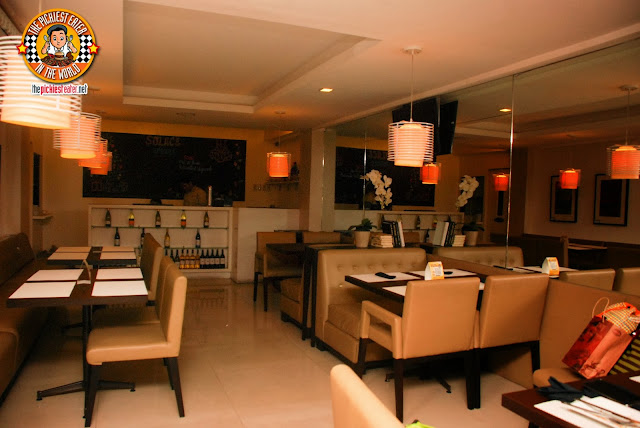 One Greenbelt Hotel is an adorable little boutique hotel along Arnaiz Avenue, and Solace Wine and Dine is the restaurant residing in it. Simple, yet elegant interiors sets the mood for a what is sure to be a relaxed meal with your friends.

Though they are admittedly just a small restaurant within a small hotel, make no mistake about it, the creations of resident Chef Phillip John Goulding are big on flavors, and can tussle with the big boys of the hotel and restaurant industry. 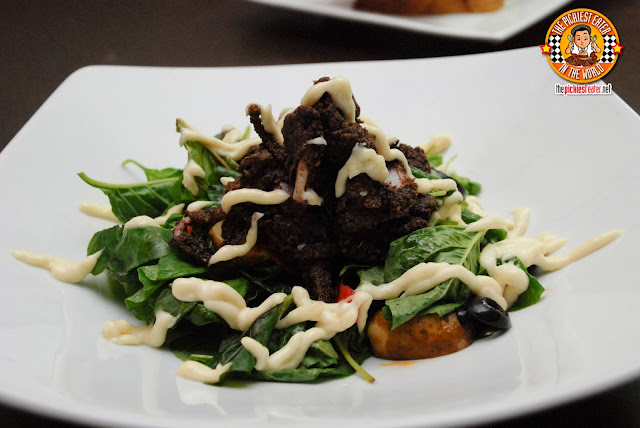 Everyone was raving about how delicious the Warm Salad of Salt & Pepper Squid (P275) was, which truthfully, looked rather interesting. It was Spinach, Chorizo, Marble Potatoes, drizzled with Garlic Aioli to compliment the squid. 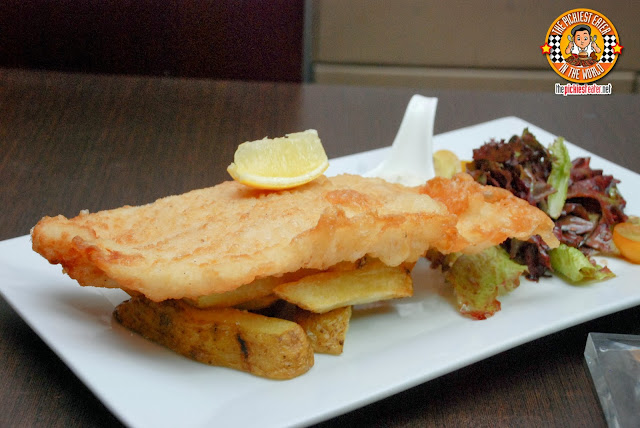 I'm a sucker for a good fish and chips, so I was ecstatic to try the Beer Battered Fish and Chips (P385) of Solace. The coating was light enough so that flavor of the fish was still prominent. What I liked about it was how the large piece of fish was sliced thinly enough, to ensure a crunch with every bite. The skin-on potato wedges were fried to a crisp, but I still would have preferred it sliced a bit thinner. The tartar sauce that came with it went perfectly with the fish. 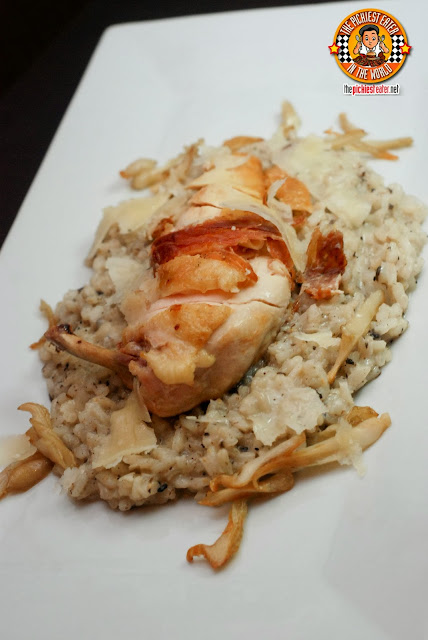 The Chicken Breast Wrapped with Parma Ham (P445) was a good effort, but fell a little short for me. First off, I'm not a fan of white meat because I find it a little dry, but in fairness to Solace's version, it was quite juicy. The Parma Ham didn't really wrap around the chicken thoroughly enough- Well maybe it did before it was cooked- making the ham look rather sloppy. Also, the chicken was laying on a bed of Mushroom and Parmesan Risotto, but I found it a bit lacking in seasoning (A few dashes of salt cured that real quick though).

I'm suspecting (although I could be way off) that they were thinking the saltiness of the ham and the cheese shavings would be enough, but it still needed a little help. 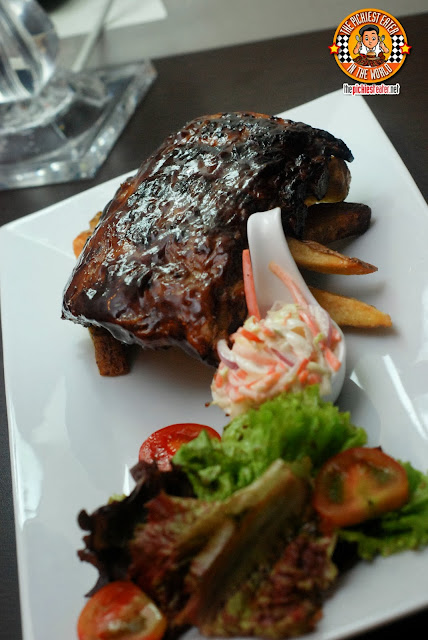 The  Slow Cooked Baby Back Ribs (P895) was more up my alley. A huge slab of ribs, basted in Solace's homemade BBQ Sauce has got my name written all over it. It had a sweet, smokey flavor that went perfectly with the coleslaw it came with. I felt like a caveman as I tore into the tender meat of the ribs one ravenous bite after another. 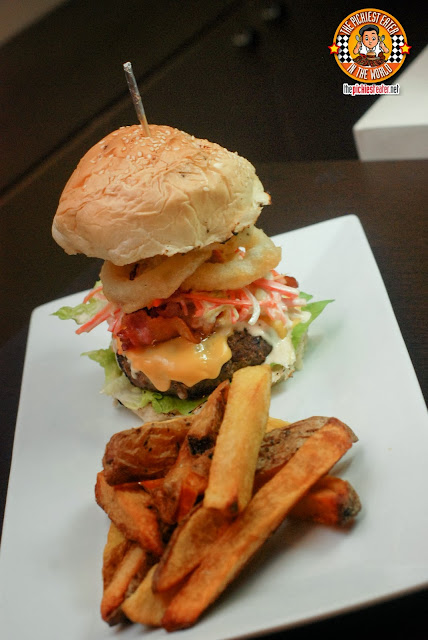 Call me weird, but I don't feel like tomatoes belongs on burgers. Which is why I found an affinity towards the Half Pound Solace Burger (P410). Instead of adding tomato slices to the burger, they threw in deep fried onion rings. In lieu of ketchup, they used coleslaw, giving the burger a creamier feel. And when you add the fact that they put in Smoked bacon and melted cheddar cheese, then you have yourself a winner. 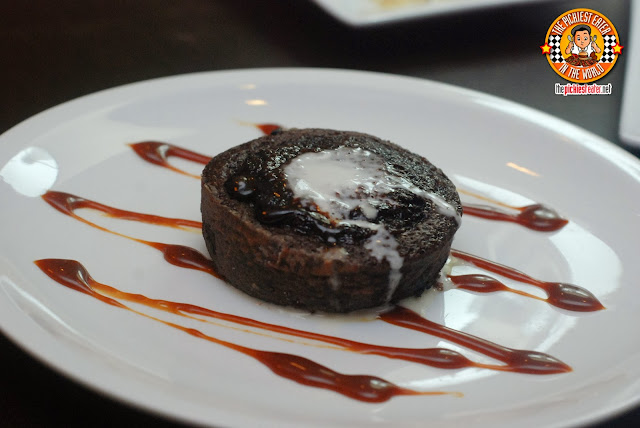 The chocolate molten Lava cake wasn't anything spectacular for me. 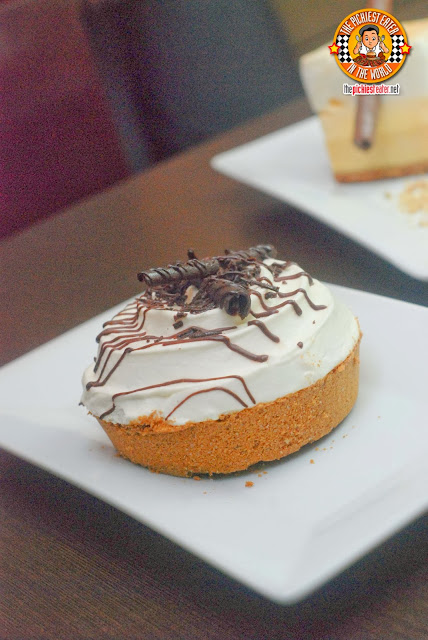 On the other hand, the Banoffee Pie is a definite must try! 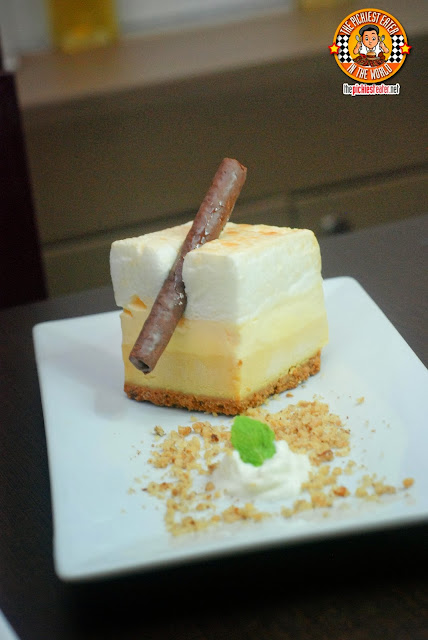 As is the frozen Brazo De Mercedes 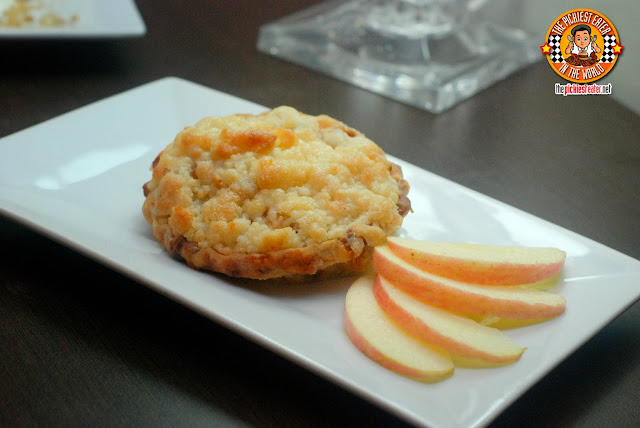 As well as their Apple Pie (Which I think would be perfect "ala mode"!)


It's a shame that I discovered Solace during the tail end of my stay at Makati, but nonetheless, It's still a trip worth making. I imagine I would have visited at least once or twice a month, and splurge on their burger or Ribs, and definitely their desserts. Considering Solace is a restaurant within a hotel, I feel that their rates are still within the realm of rationality.

Also, I'm pretty sure you won't want to miss this promo! 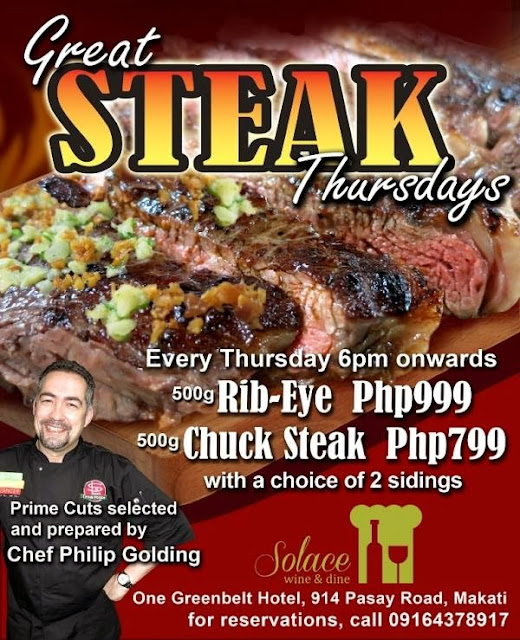 Email ThisBlogThis!Share to TwitterShare to FacebookShare to Pinterest
Labels: Makati, Makati Restaurants, One Greenbelt Hotel, Ribs, Solace Wine and Dine, Where to Eat at Makati