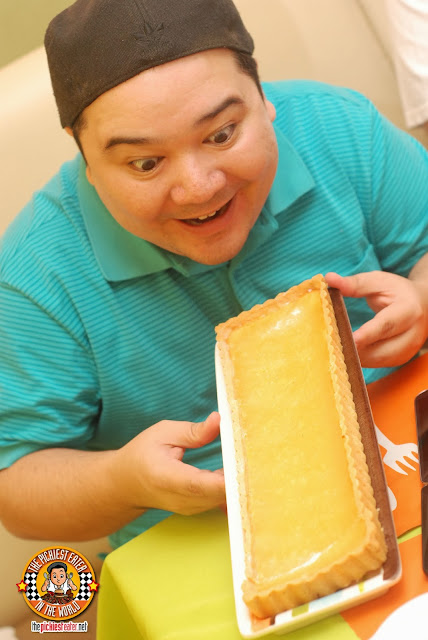 You ever notice how, when you think of a trip you want to take to a place that you'd like to visit, names of restaurants from that area seem to pop up into your head instantaneously?

I've mentioned in the past that I used to live in the beautiful city of Cebu. Mind you, not when it was the modern city that it is today. I'm talking about the time that, when you watch "Lunch Date" on GMA 7 (There was no cable TV yet, so don't judge) you did so on a one week delayed telecast. But during my nearly one decade stay there, I found so many small, local dining gems, that till this very day, my taste buds crave for.

In Davao, there is one restaurant that I think anyone from Davao would easily tell you, is one of the city's dining treasures: Lachi's Sansrival, atbp. 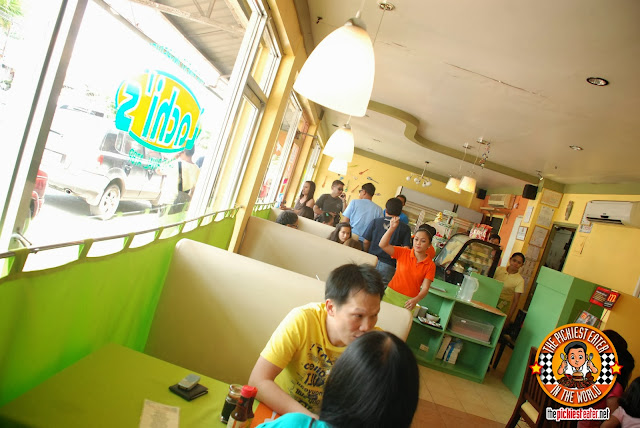 Something I assure you you'll hear about from people that have had the Lachi's experience firsthand, will tell you that there's something incredibly comforting about the place. It's simple, but the warmth of the people, and the love that you feel in every "home cooked" style dish just feels like home. 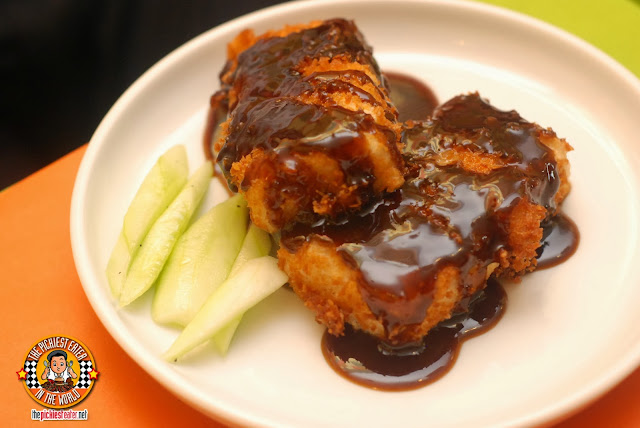 Over the years of my blogging, I've learned to start appreciating food that I had shunned throughout my whole life. I remember my hatred for Tofu began when I was a child, and I accidentally ordered a Tofu Burger (Not knowing what Tofu actually was), while my companions got a quarter pound of pure beef. It's an experience that would traumatize anyone. But after trying the Tofu Steak of Teriyaki Boy, I realized that it could actually be quite tasty.

Lachi's version, Breaded Soft Tofu in Teriyaki Sauce (P115) was amazing. The Teriyaki had the right balance of soy and sugar, and served as a excellent topping to the delicated fried breaded tofu. 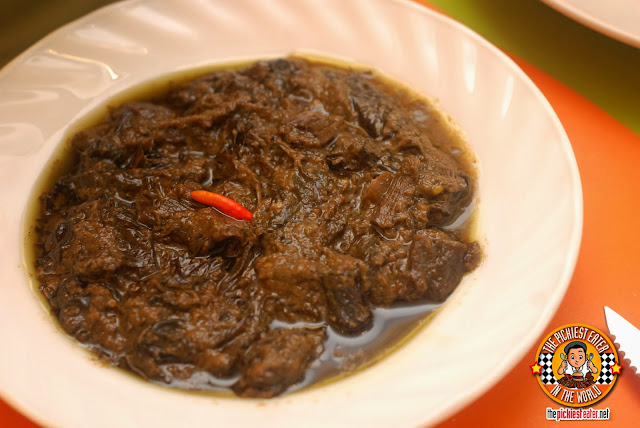 Have you ever eaten a dish that was a tad bit too spicy for you, but you didn't care because it was so darn good? Well, Lachi's Spicy Laing (P60) was pretty much like that for me. Truthfully, the heat wasn't anything overwhelming, but my tolerance for spicy food isn't very high, yet I found myself scooping one spoonful after another on top of my steaming hot white rice, while ending up going through a pitcher of water all by myself. I love anything with coconut milk, and this had a buttery-ness that made it stand out for me.. despite it being a vegetable dish. 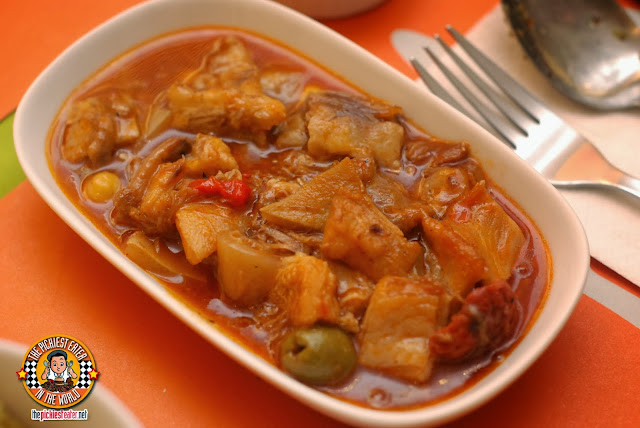 Anything to do with an animal's innards or the like, is something I don't usually eat. I always figured, why bother with the tripe, when the meat itself is pretty downright awesome? Nonetheless, the Callos (P185) of Lachi's was a hit with everyone, including Rina. 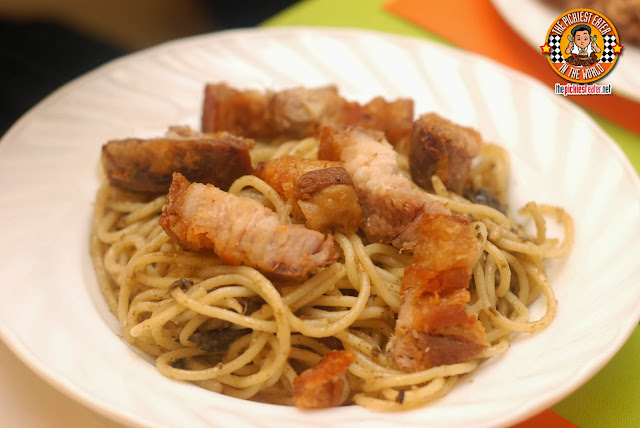 I have a confession to make. I would take the Oil drippings of the laing and mix it into my rice, and eat it alone sometimes. Well, the geniuses at Lachi's realized that they could take the Laing sauce and pour it over a plate of pasta, and it would make a fantastic dish. Then they went the extra mile, by topping it with Lechon Kawali, thus giving birth to.. Dare I say it?

Laing Pasta with Lechon Kawali (P135). If you find the Lechon Kawali a bit too much, you can opt to replace it with Pan Fried Bangus instead (Oh please.) 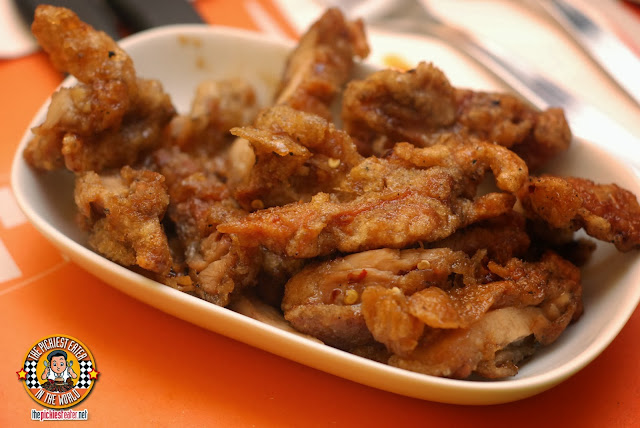 Lachi's answer to the Twice Fried Chicken craze, is their Asian Spicy Chicken (P140). The heat on this wonderfully balanced by the sweet glaze that coats the chicken strips, so you feel it tickling your taste buds, but not enough to get you grabbing for the closest glass of water. The crunch on the chicken will also keep making you want more. 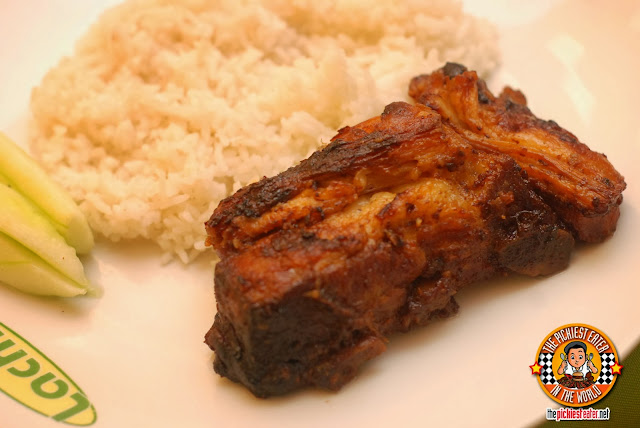 Lachi's Unforgettable Pork Ribs (P158) is remarkably tender, and had a nice ratio of pork meat to fat to it. It was brushed in a lightly sweet glaze that brings together a harmony of sweet and savory.

Apart from their delicious food, Lachi's is also very popular for their impressive lineup of desserts. 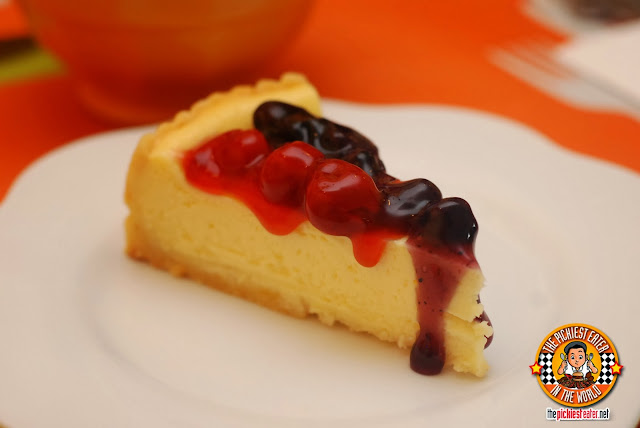 Lachi's New York Cheesecake features not one, but two toppings on it! Strawberry and Blueberry! because, you know.. having one topping on your cheesecake is just too mainstream. 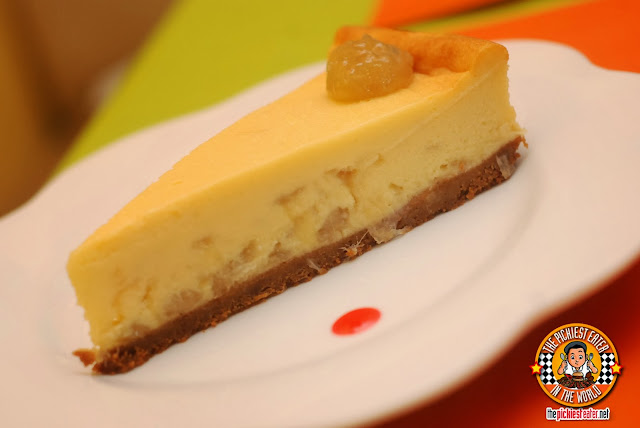 In Davao, you will always find a Durian-infused dish, so it was a no brainer for them to try it with the Durian Cheesecake. Though the taste of the Durian was bearable for me, I still preferred the New York Style (Just keepin' it real, yo). 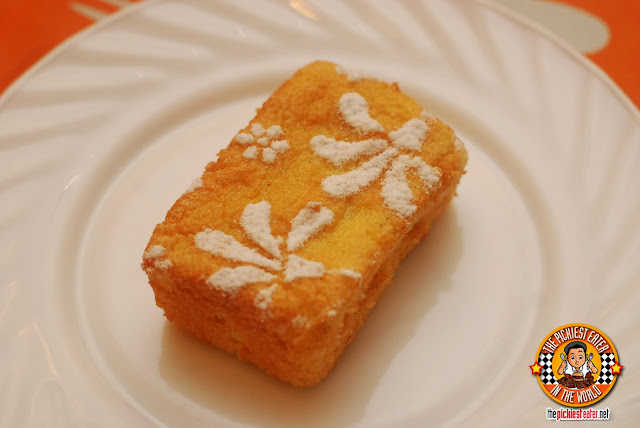 I totally forgot the name of this sponge cake, but I thought it was rather cool how they made a fleur de lis out of confectionery sugar on top of it. 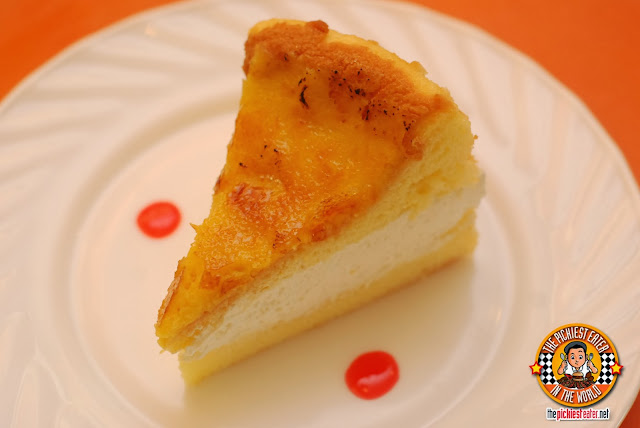 The Creme Brulee Cake was a nice spin on the dessert classic. 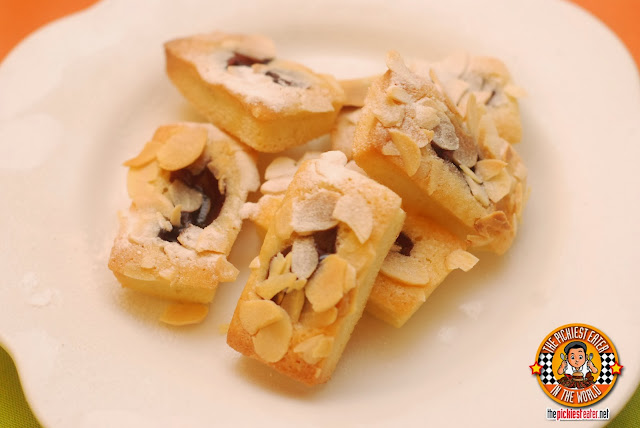 The Financier, was sort of like Biscotti, with a sprinkling of almonds and a bit of a blueberry compote. 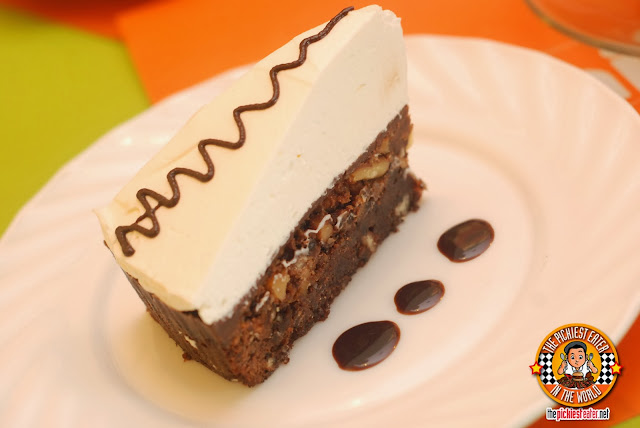 Lachi's Luscious Mud Pie can stand toe to toe with any bakery here in NCR. Every layer has a distinct layer that completes your Lachi's experience. To this day, I still have dreams of the whipped cream topping, and the moist chocolate cake with a sprinkling of chopped walnuts. 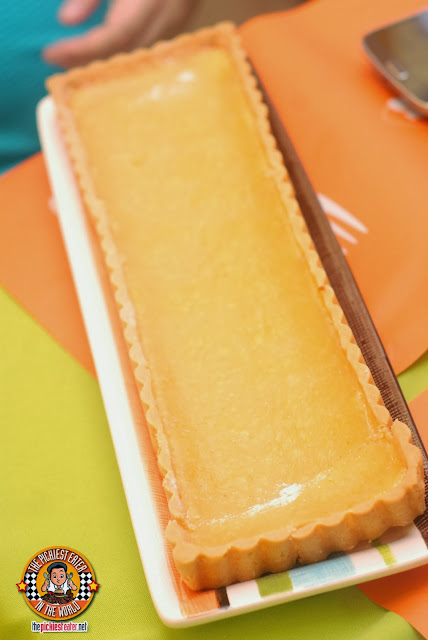 I also really enjoyed Lachi's Key Lime Tart. It had the right amount of acid on the lime curd, and the buttery goodness of the crust was absolutely divine. 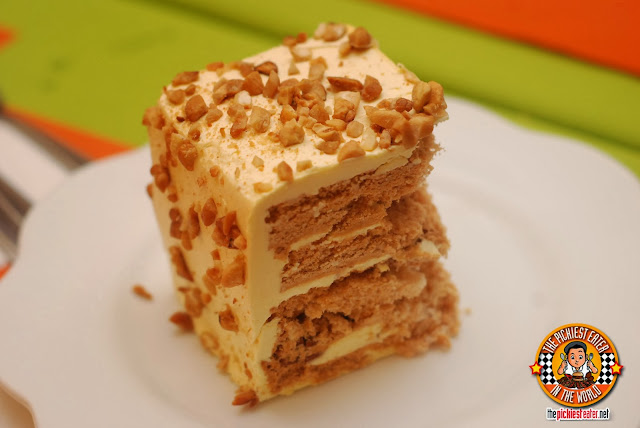 You don't slap the name of the dish on to your Restaurant's name, unless you know it kicks ass... And Lachi's Classic Sans Rival kicks ass so hard it would beat you to a bloody pulp. In a good way. If that's possible. The frosting was was buttery and creamy, with the inside all flakey, with the nuts adding a nice crunch. Naturally, there is also a Durian infused version, which again, was a nice twist to the classic, but nothing beats the classic! (Also available is a Coffee version)

What was once merely just a  simple restaurant has grown into a Davao City landmark that one must not miss when visiting the Crown Jewel Of The South.

Much thanks to our gracious hosts, owners Michael and Melvin Aviles for the outstanding meal! 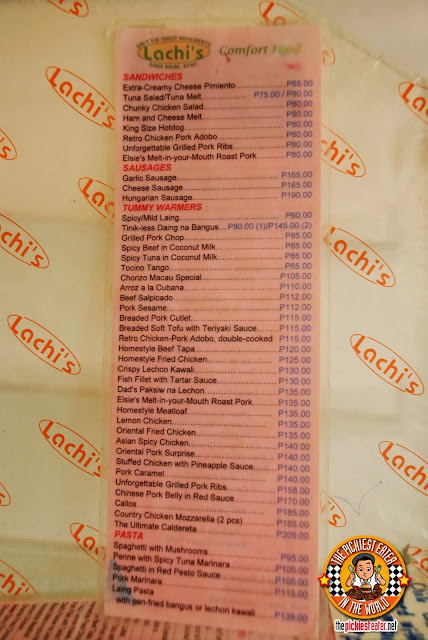 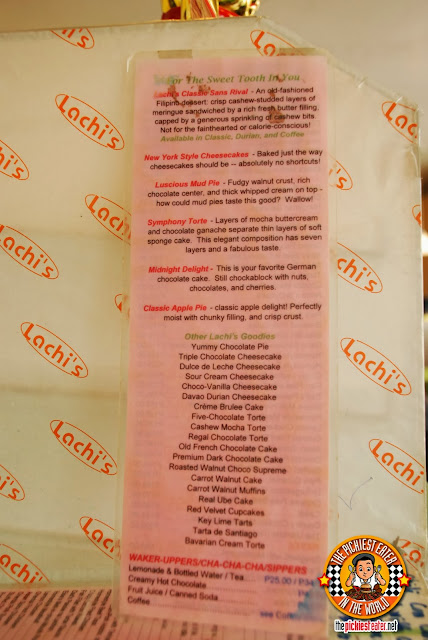 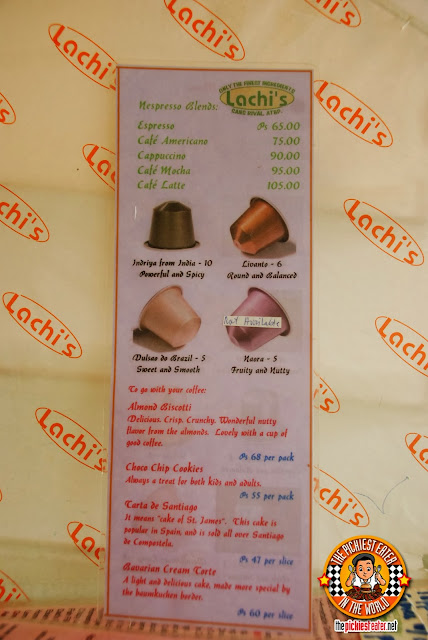 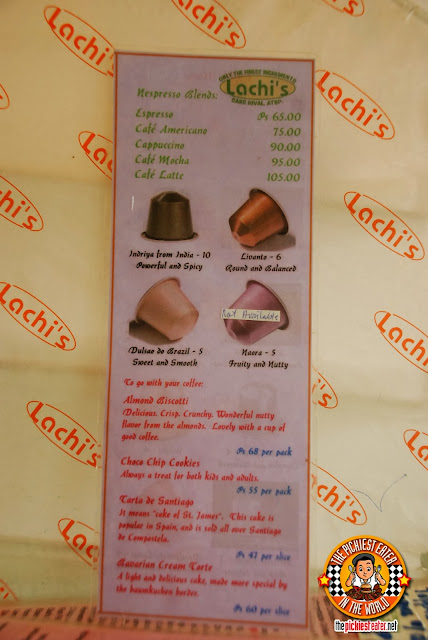 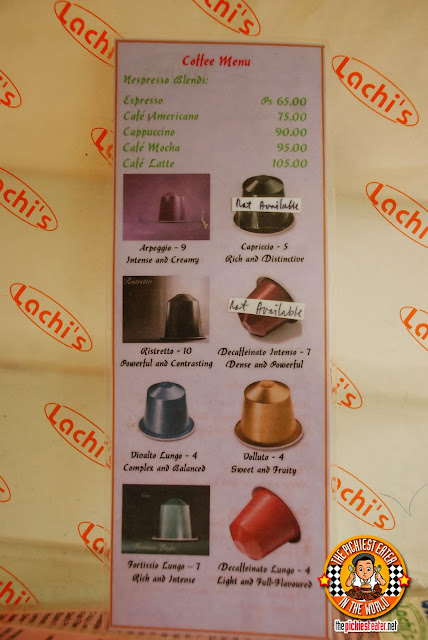