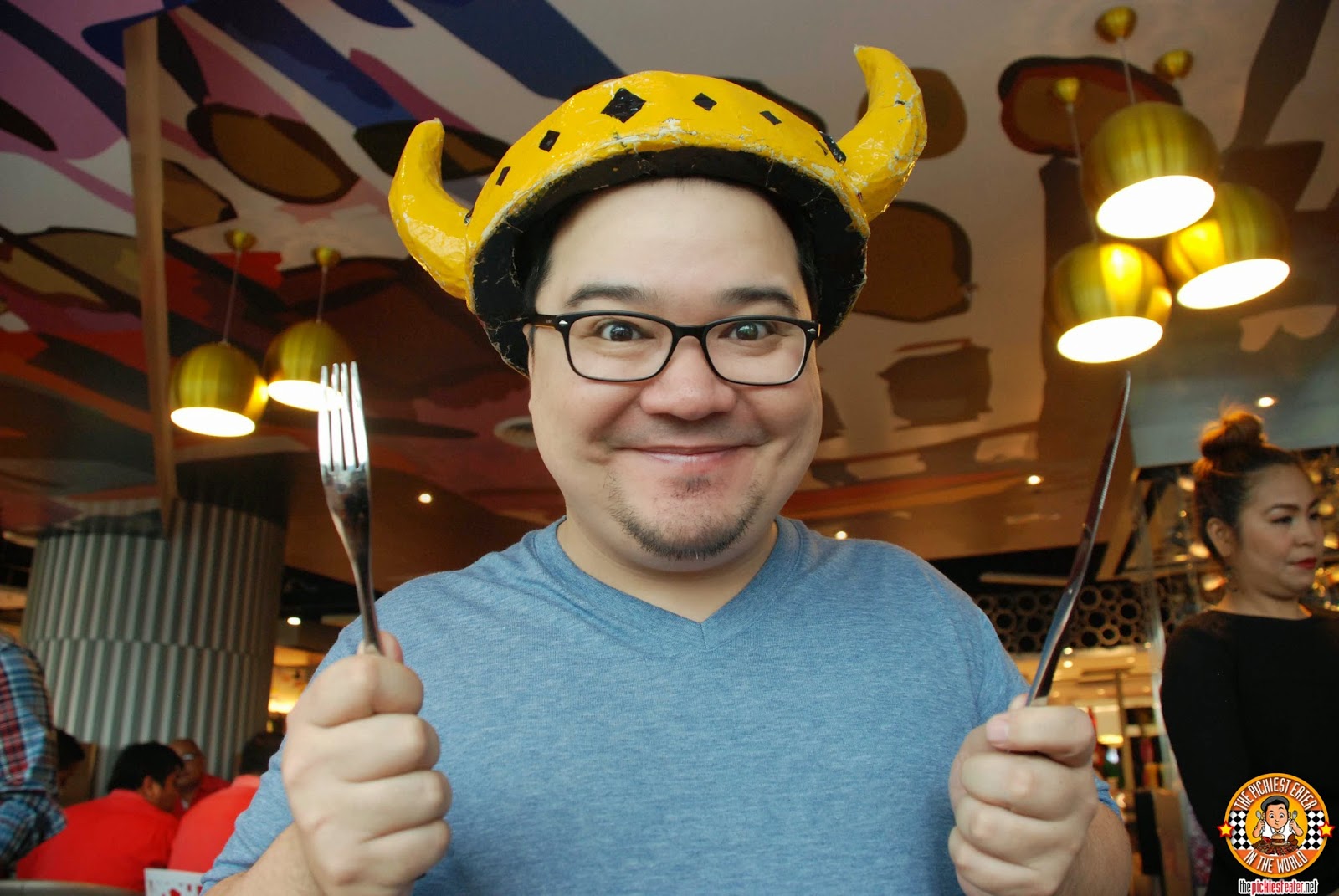 I have a confession to make. You would think that a big eater such as myself would jump at the chance to visit a food paradise such as Vikings, but life got in the way. It wasn't until a few months ago that I was able to dine there.

Vikings is one of the favorite restaurants of (of all people) my mother (I take after my momma), and she wanted to celebrate her birthday at the SM Marikina Branch (Birthday Celebrants eat for free).

Unfortunately, I didn't enjoy my experience. Not because of the food, but because I had an event that evening, and I was pretty much rushing the entire time. Not to mention, there were so much people it was hard to move around. So, it was safe to say that my first Vikings experience didn't have me rushing to go back to Marikina or Mall Of Asia.

I was elated to hear that Vikings opened their latest branch at the recently-opened SM Megamall Fashion Hall. I felt it was a good time to give Vikings another chance.. and see what all the fuss was about.

This time I didn't have a pesky event to get in my way. I had all the time in the world to eat as much as I pleased. I could- dare I say it?

I think "Vikings" is a great name for a buffet place. When you hear the word, "Viking" you think Beefy, Burly men, capable of tearing apart an entire roasted cow with their bare hands, seconds before devouring it.

Take for example, my favorite Viking, Hagar the Horrible. 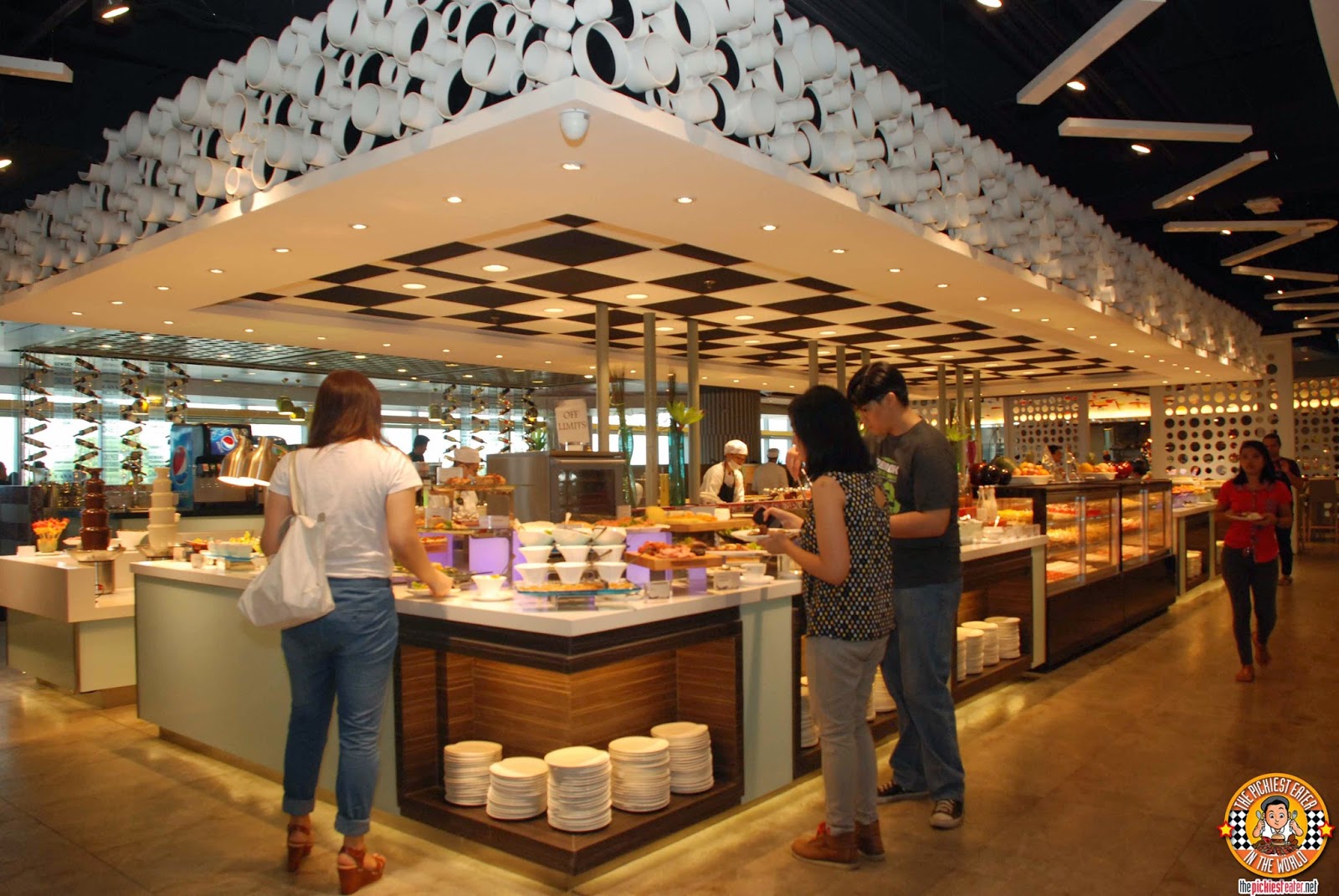 Truthfully, I was expecting a more "Tavern" looking dining area, to match the "Viking" theme, but I was pleasantly surprised to be greeted with lavish interiors, sophisticated enough to give a hotel buffet a run for its money. 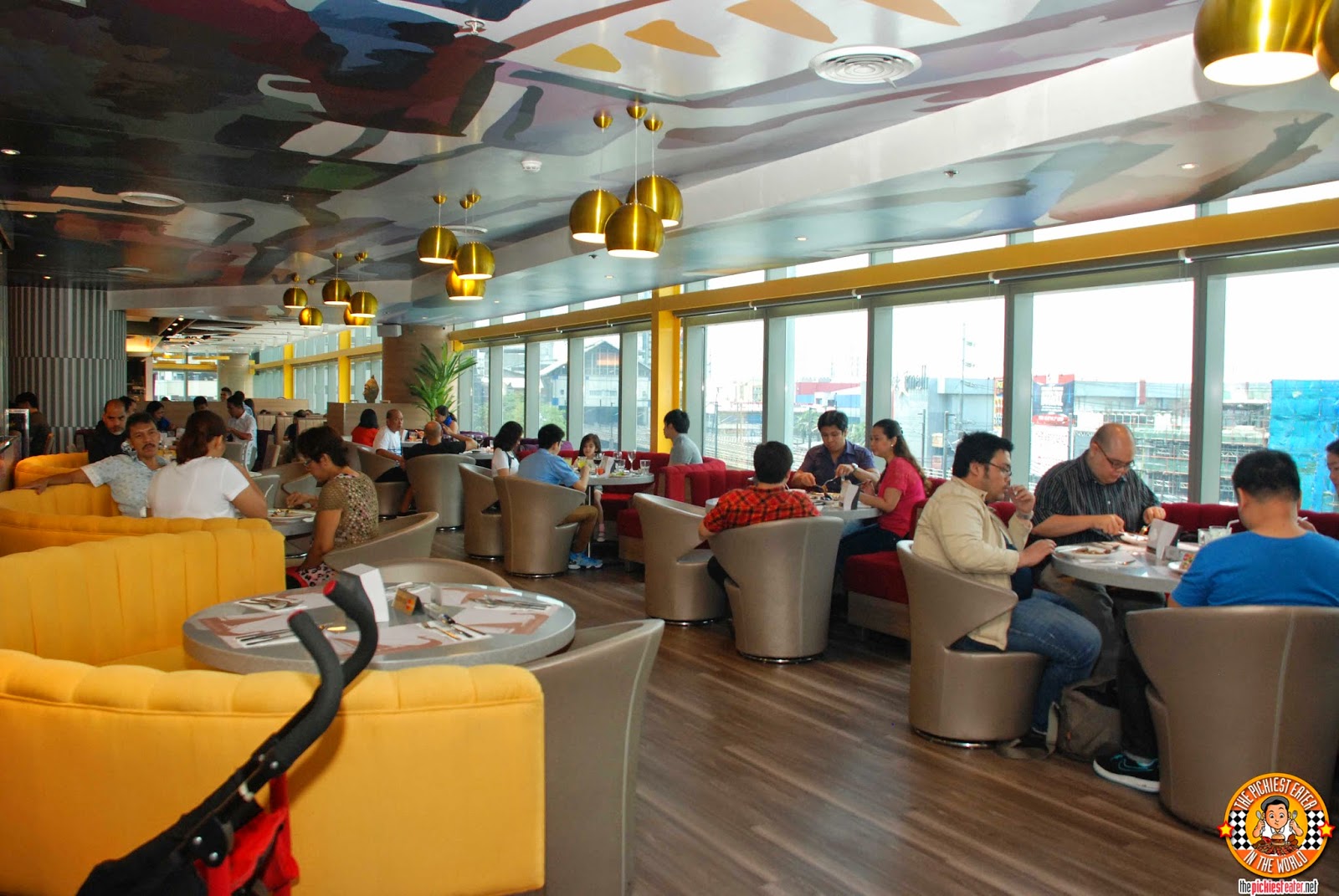 The newest branch of Vikings was built to accommodate up to 500 guests, but I must warn you.. The place still gets packed. Thankfully it's not cramped like the Marikina Branch was. This looked more like a modern art exhibit than a buffet fit for a Viking.

But who was I kidding? I wasn't there to check out the art!
DRINKS 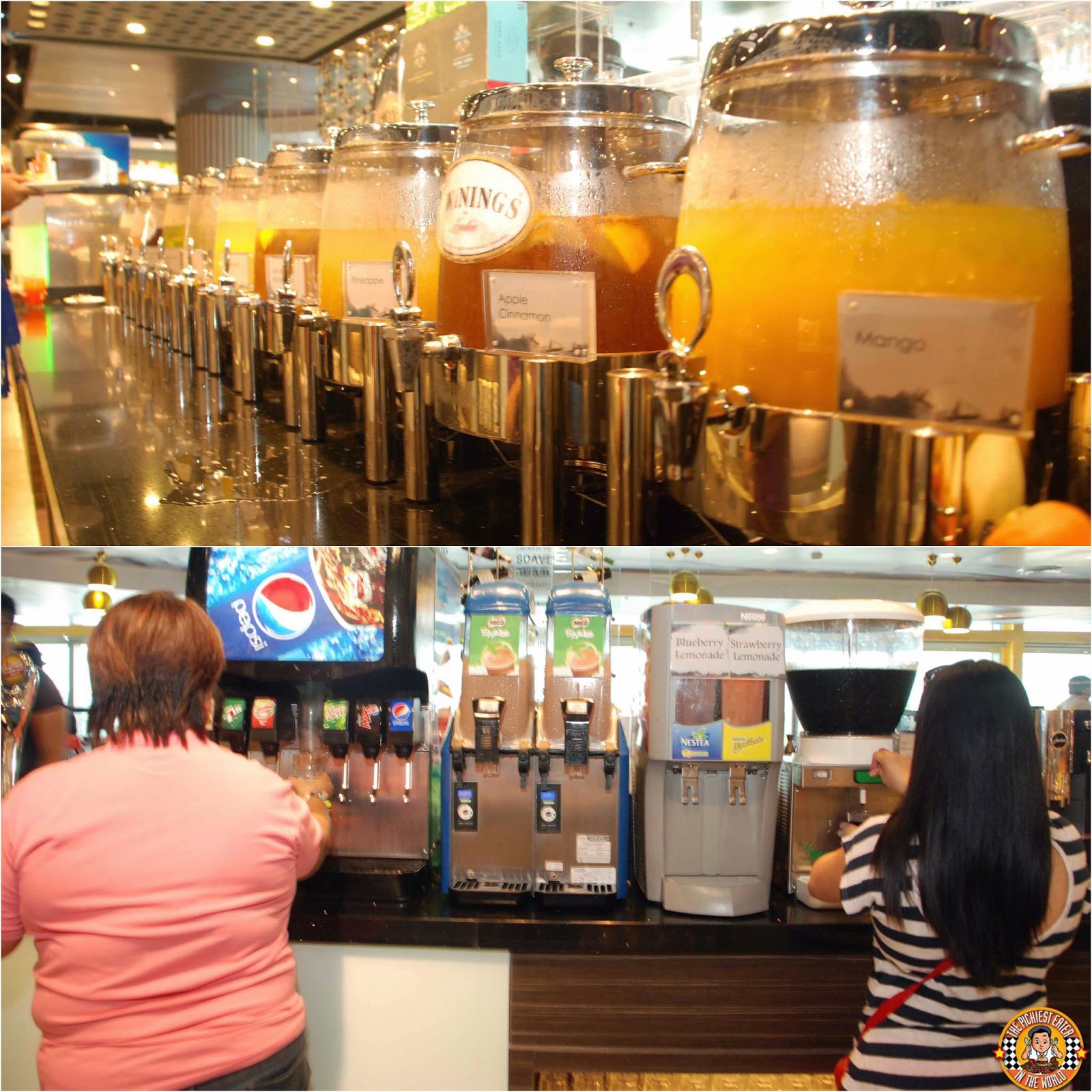 Vikings offers you an extensive selection of fresh juices and shakes to choose from, as well as Pepsi products to wash your meal down. My favorite of the day was the Four Seasons Juice, and the Apple Cinnamon Iced Tea from Twinnings. Also, my dearest friend, A View From The Leftie made me try the Honeydew Melon Shake, and I thought it was nothing short of phenomenal!

Normally, when dining at Buffets, I stay away from drinks and stick to water, to make sure my tummy doesn't get too filled up on fluids and feel bloated whilst pigging out-err... sampling the dishes.

The biggest problem with dining at Vikings (aside from the long queue), is the moment you step on to the floor, you have no idea where to start. Your selections are so vast and diverse, you get confused on what your stomach wants.. Because it clearly wants EVERYTHING. A good problem, but a problem nonetheless. 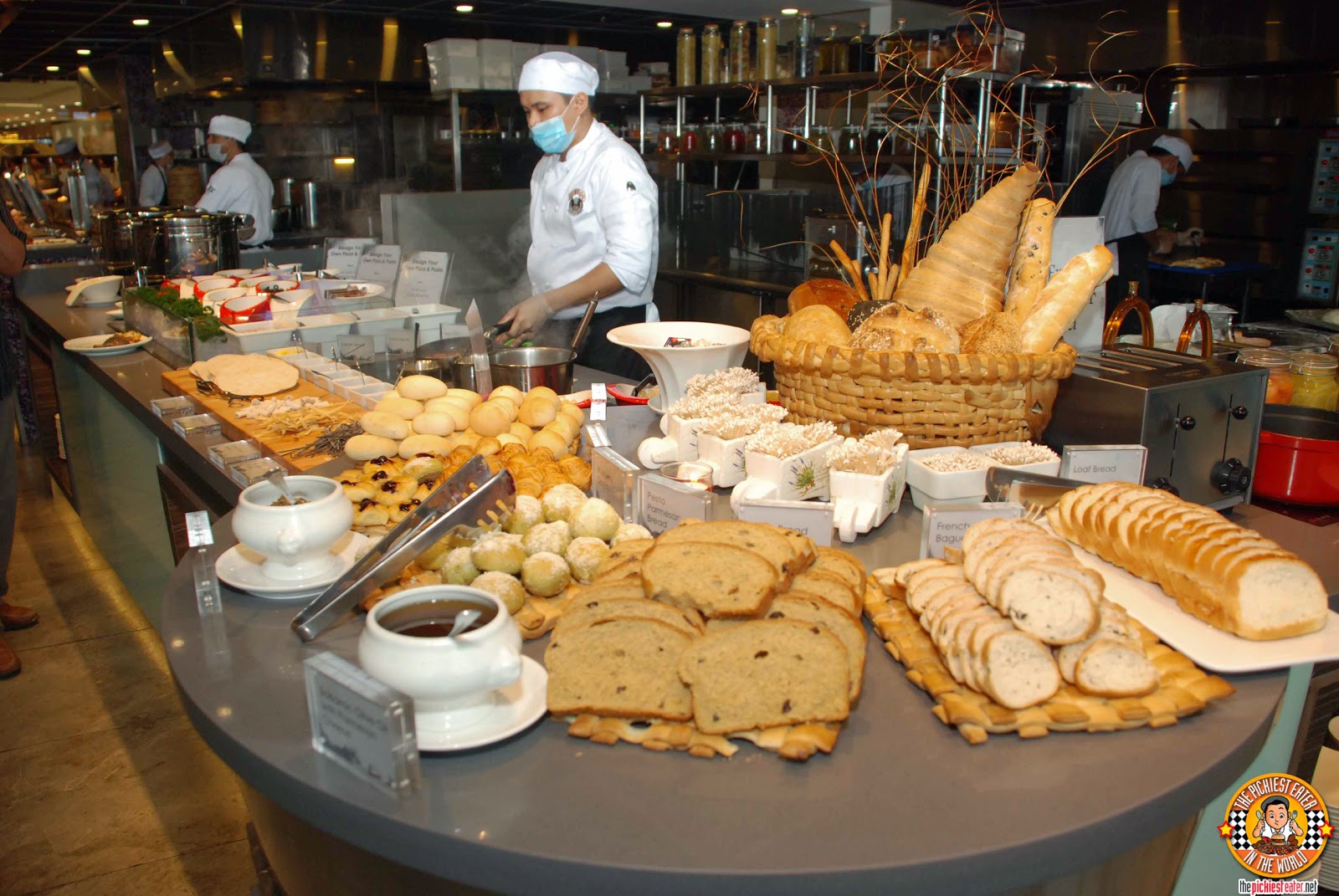 Vikings has a delightful collection of Breads... 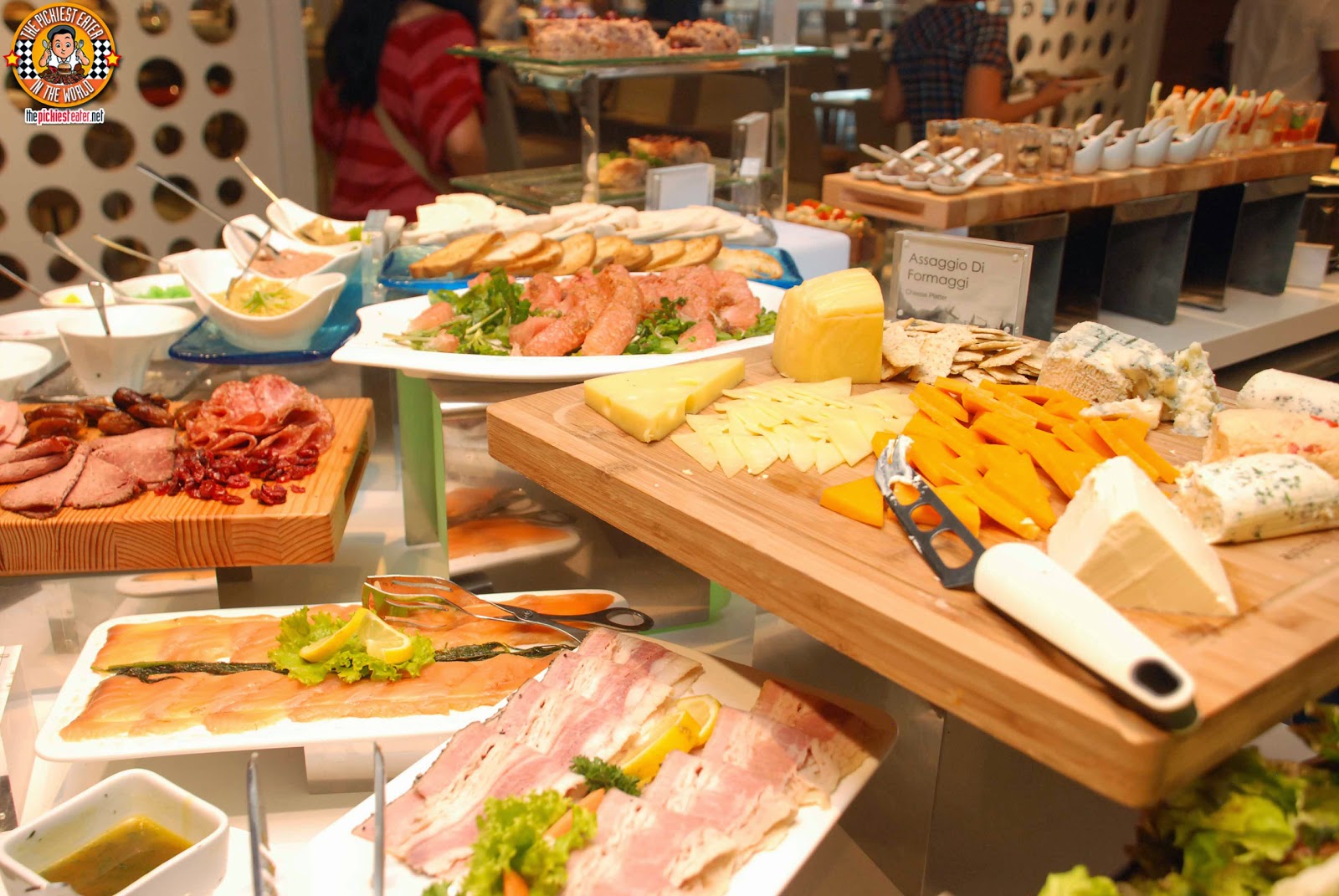 ..To pair with its selection of cold cuts and cheeses! 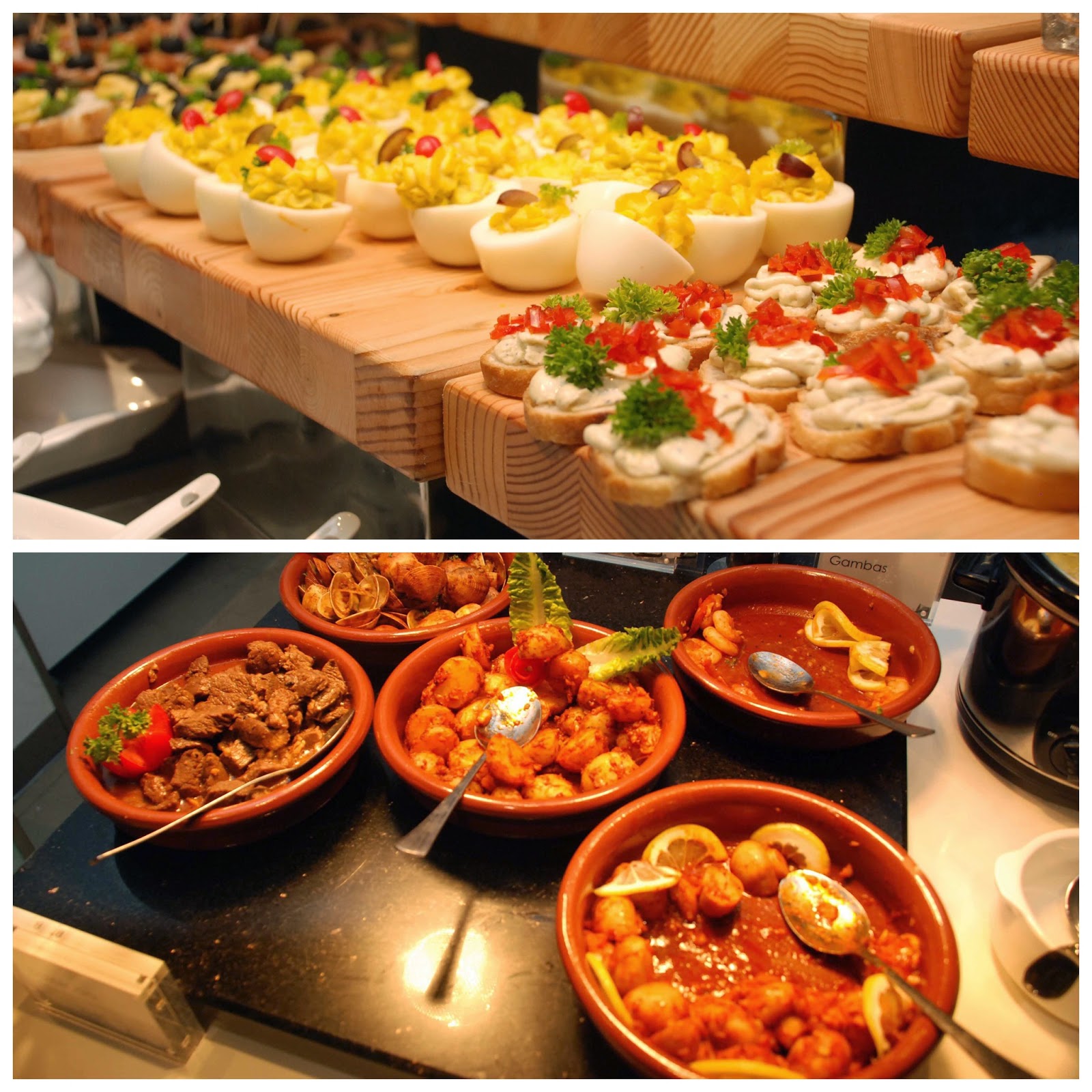 Being the carnivore that I am, I head straight for the mains. Rina, on the other hand, insisted that I was missing out on some delicious canapes. 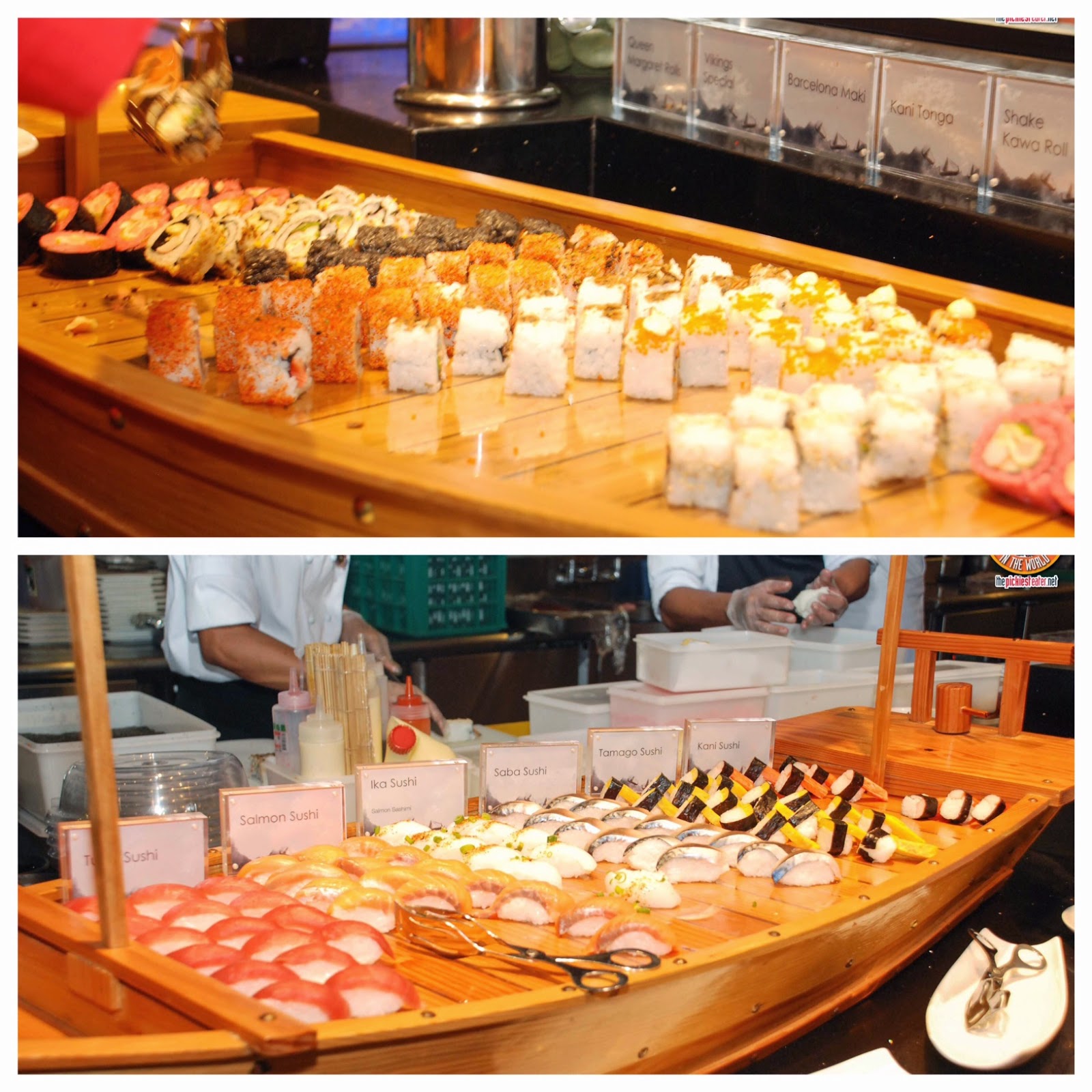 The Japanese section has the requisite Shrimp Tempura that is always in high demand, but aside from that, enthusiasts of cuisine from the orient will be pleased with the Sushi and Sashimi choices that Vikings has. 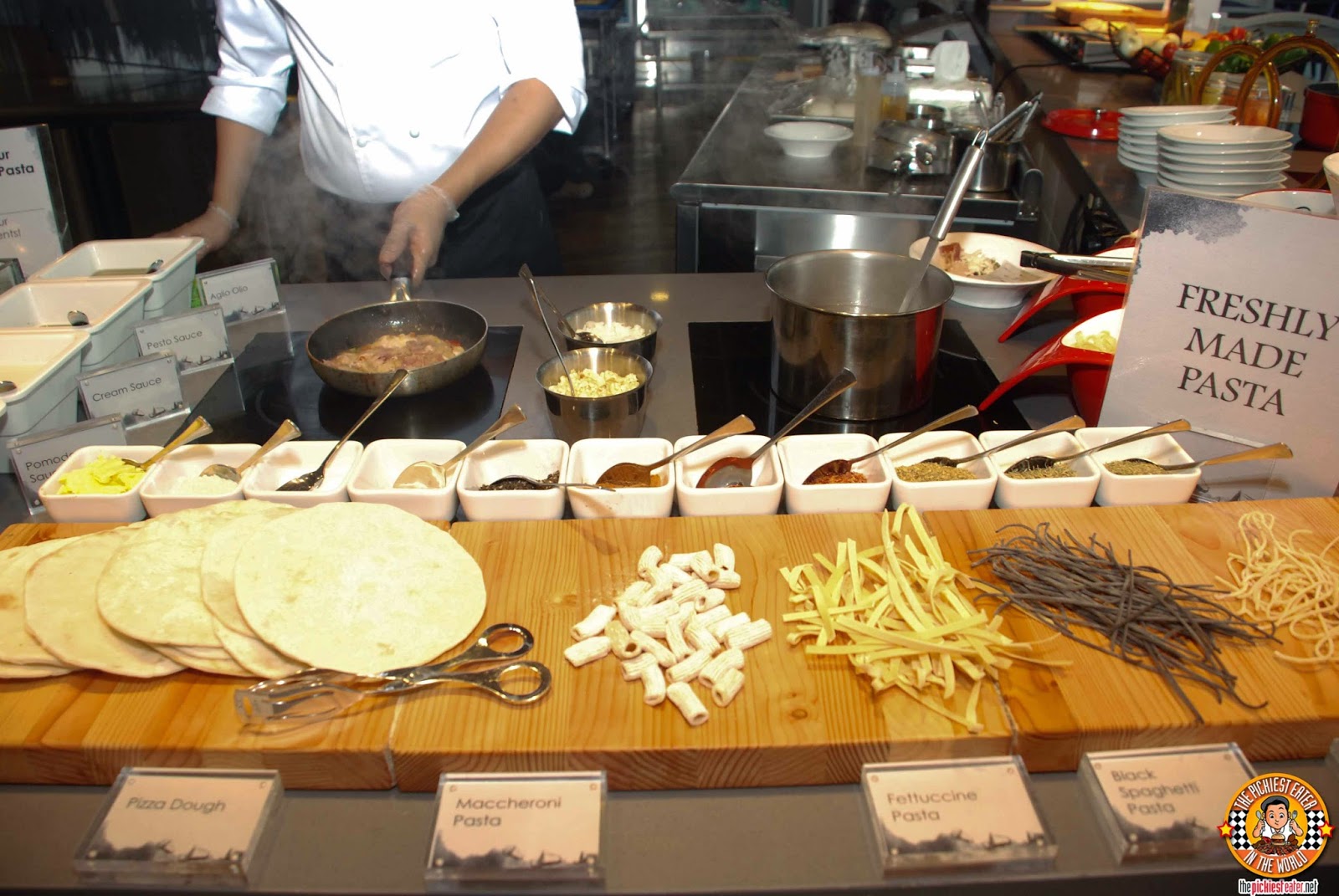 If you're looking for an Italian food fix, then Vikings Pizza and Pasta station might interest you. You can make your own pasta, with the different types of freshly made pasta laid out for you to choose from, as well as an assortment of ingredients that you select to concoct your personalized pasta dish. 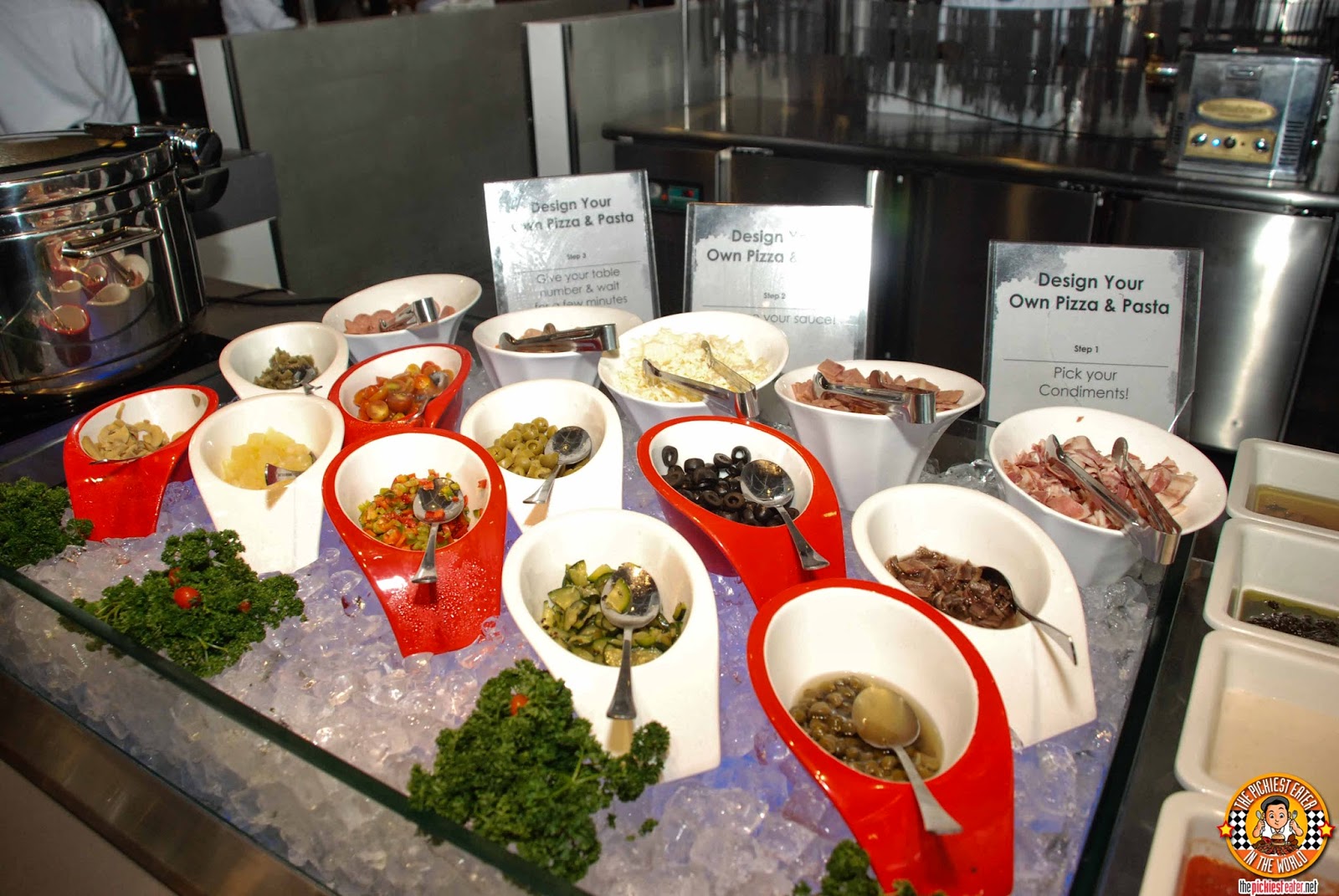 There is also a selection of condiments, (both meats and vegetables) available to construct your own pizza pie! 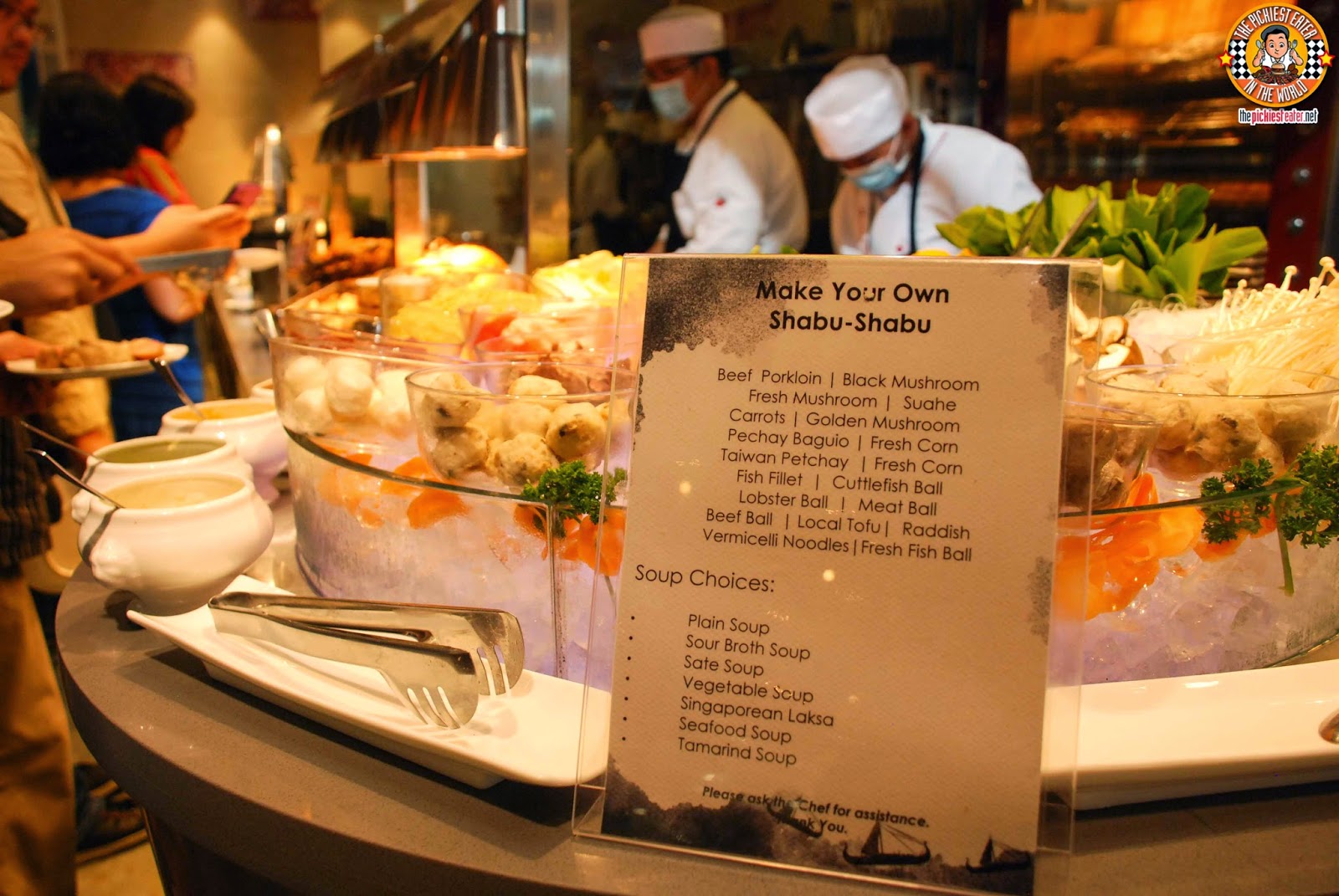 Those who enjoy Shabu-Shabu would be happy to know that Vikings has Station where you can make your own Shabu Shabu. 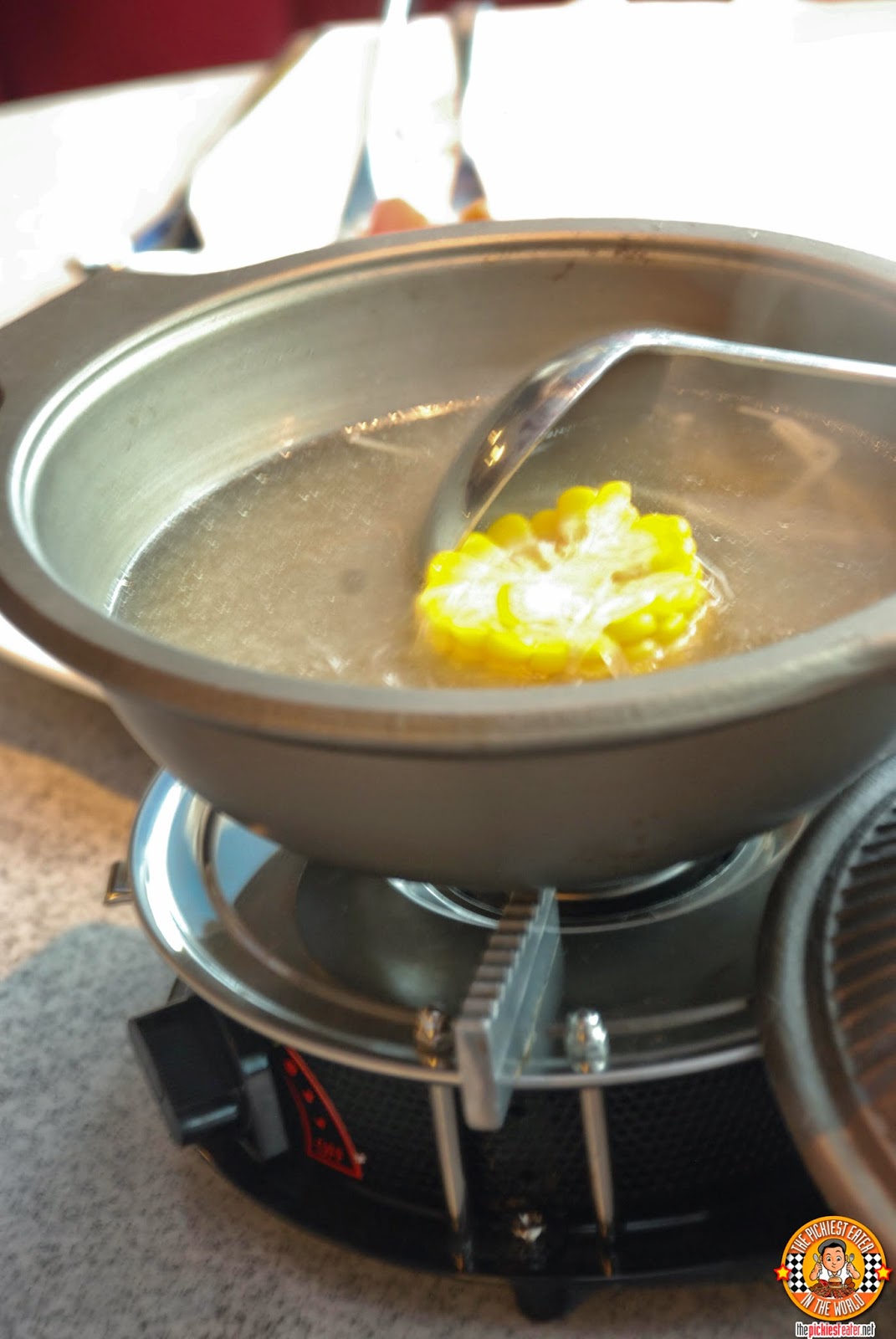 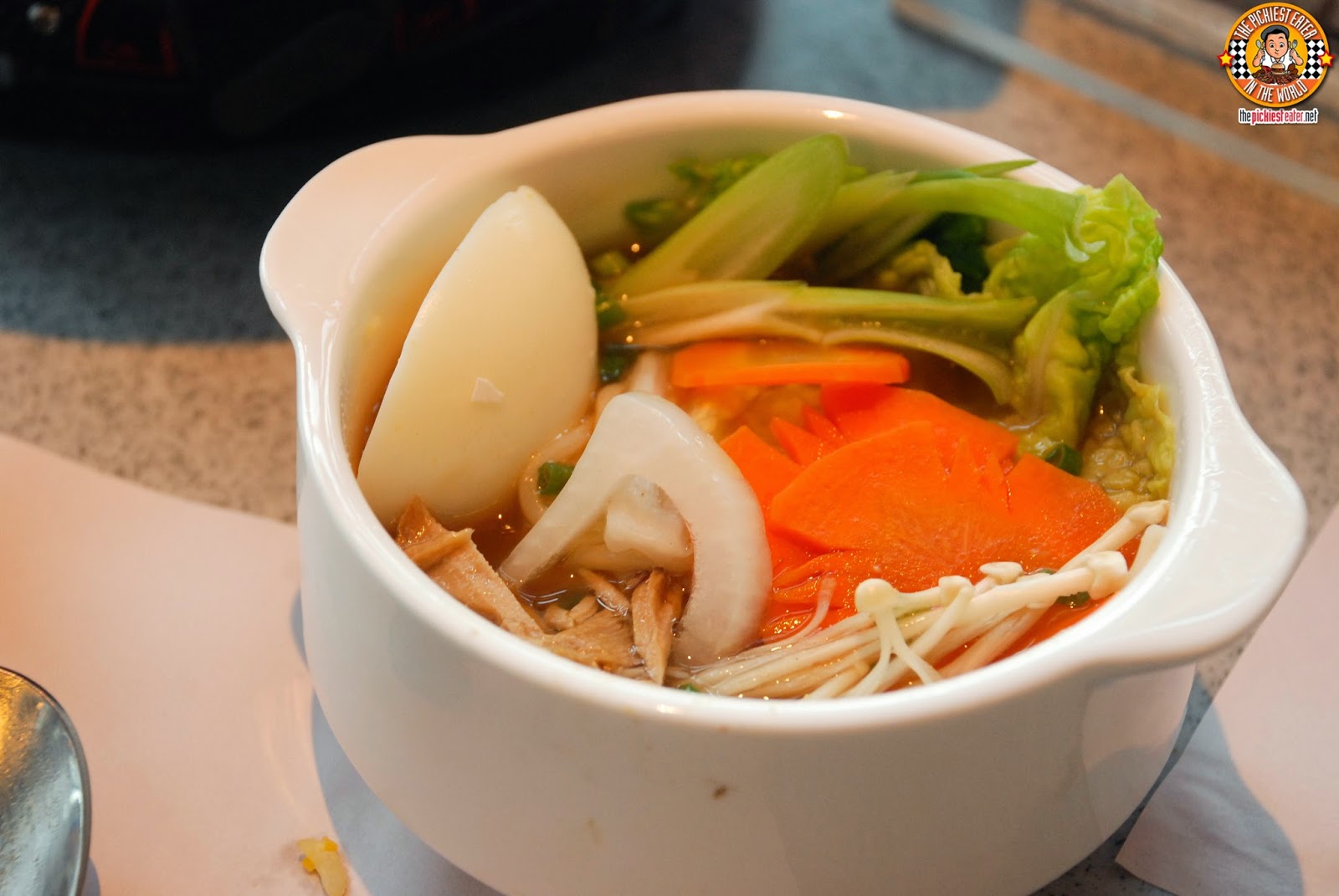 Your choices of soup ranges from Sate, Tamarind, Singaporean Laksa  and more, then you choose your ingredients, from Beef, Porkloin, Lobster balls, to Fresh Corn, Bokchoy and vermicelli noodles. A Burner is brought to your table where you may adjust the flavor of the broth by adding the sauces to your liking. 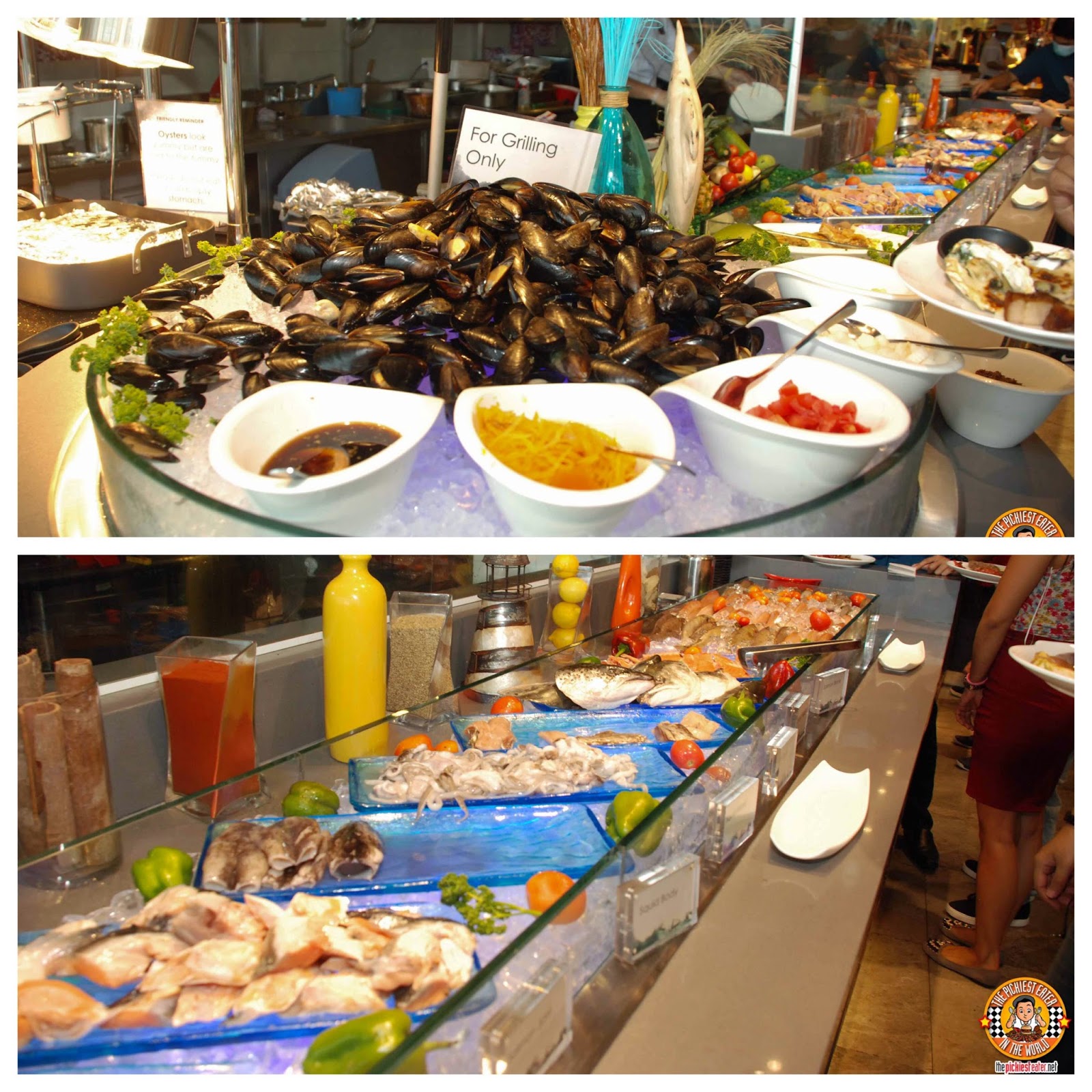 Another treat for the more health conscious and want to stray away from fried food, is the Grill Station. You have a wide selection of meat and seafood to choose from. The Mussels seemed to be quite popular, but I stuck to the sausages! 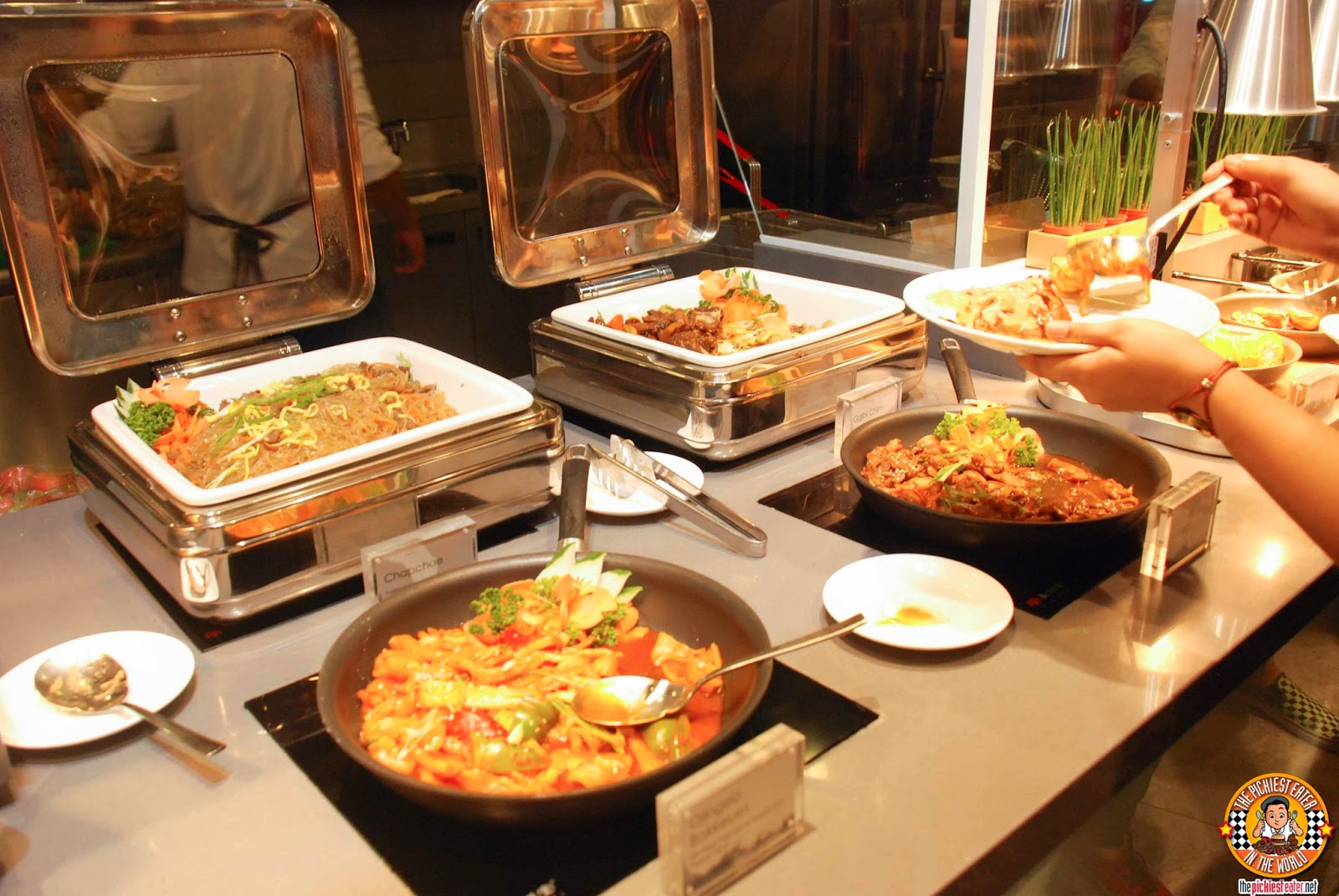 The Asian Sections are pretty well stocked, with Korea Dishes in abundance, including my favorites Chapchae and Kalbi Jjim! 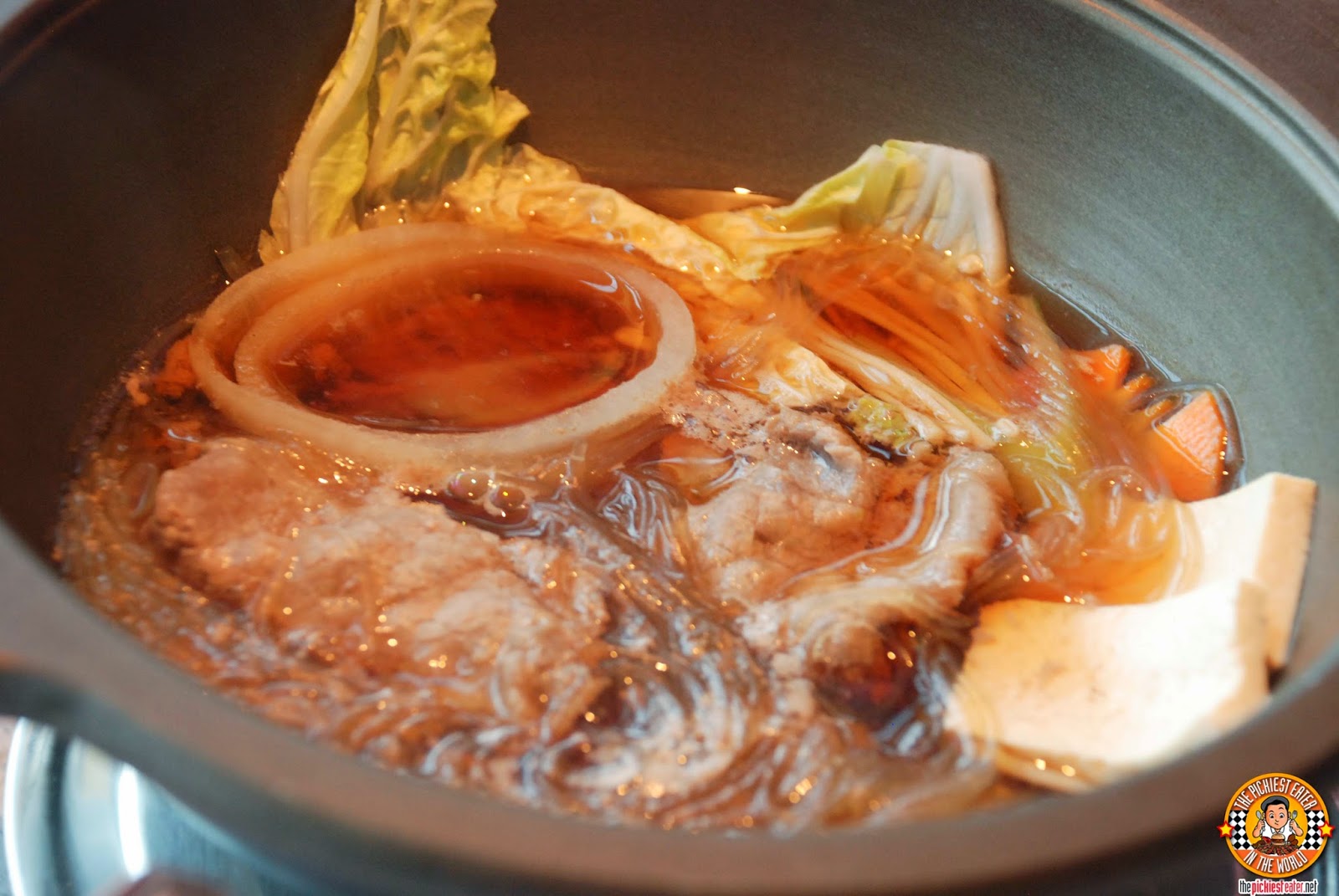 The Japanese section has the popular dishes common to buffets, such as Tempura, and Teriyaki, but to me, what I really enjoyed was the Sukiyaki! It had a nice sweetness to go with the saltiness of the soy, and was filled with thin strips of fatty beef.. What's not to love? 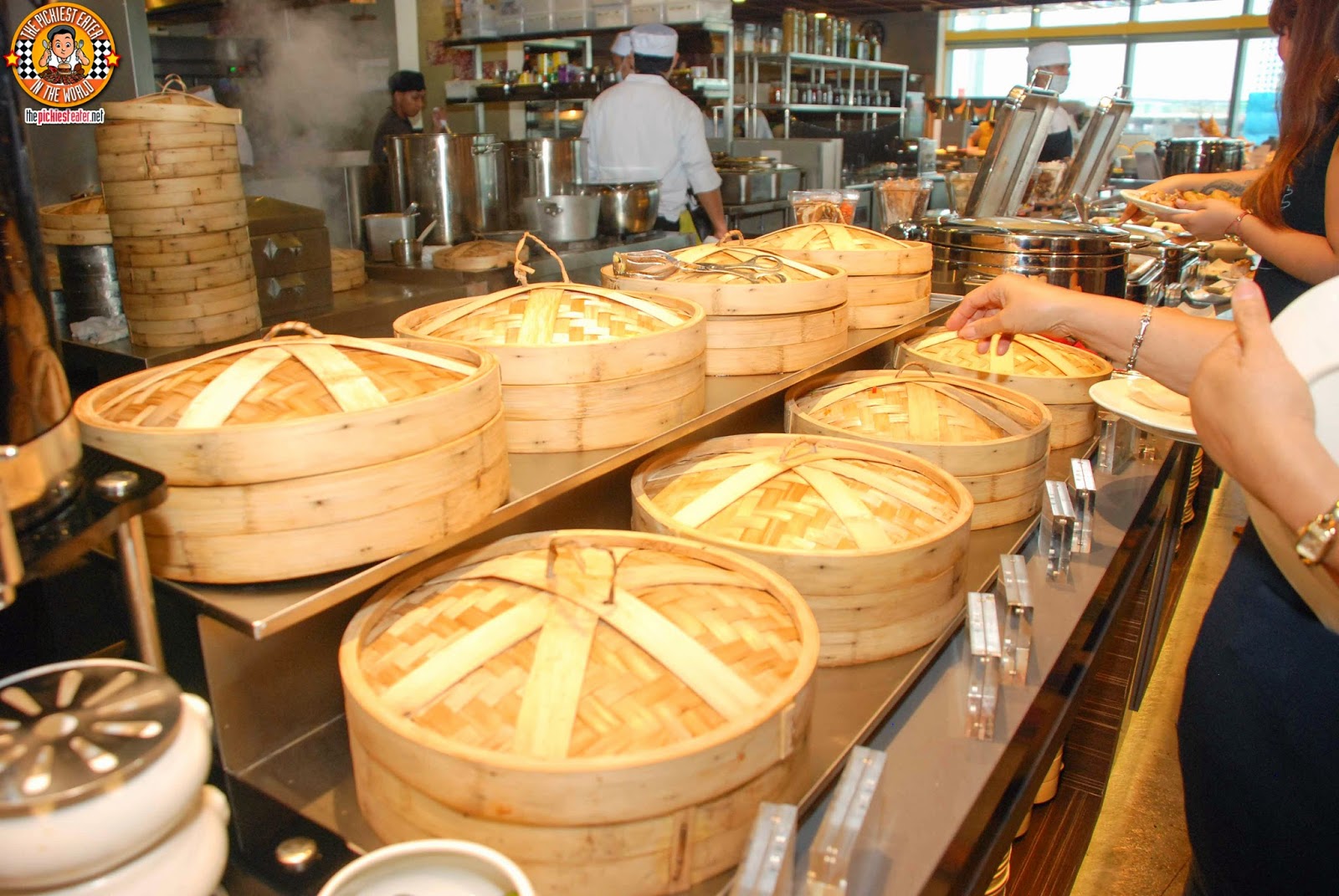 One of my favorite spreads of Vikings had to be the Chinese station. They had a wide array of Dimsums to choose from - ranging from Siopao and Siomai. 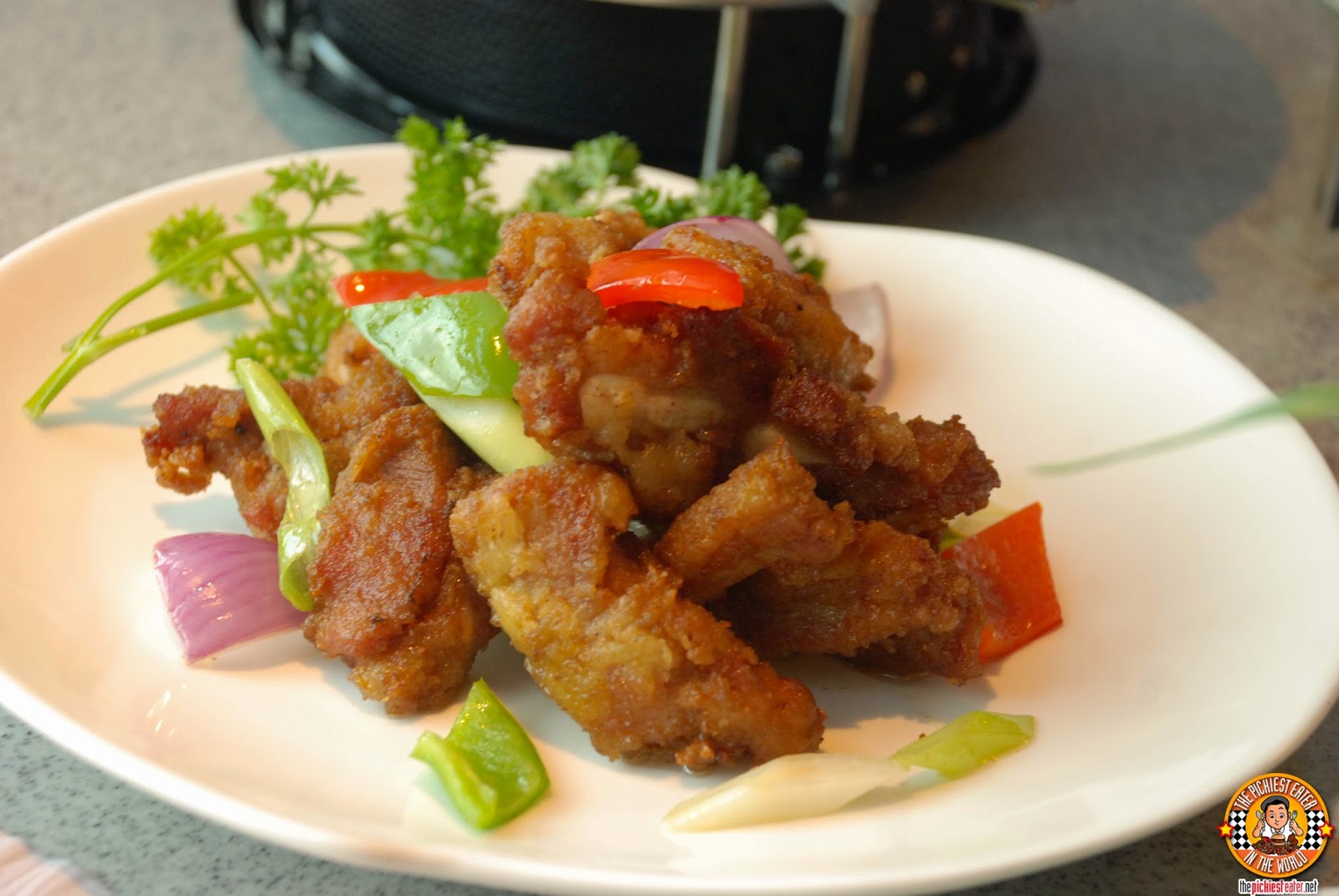 A dish from the Chinese Station that stood out was the Fried Salt and Pepper Spareribs. Deep fried to perfection, with every bite packing the right touch of heat. Incredibly flavorful and delicious! 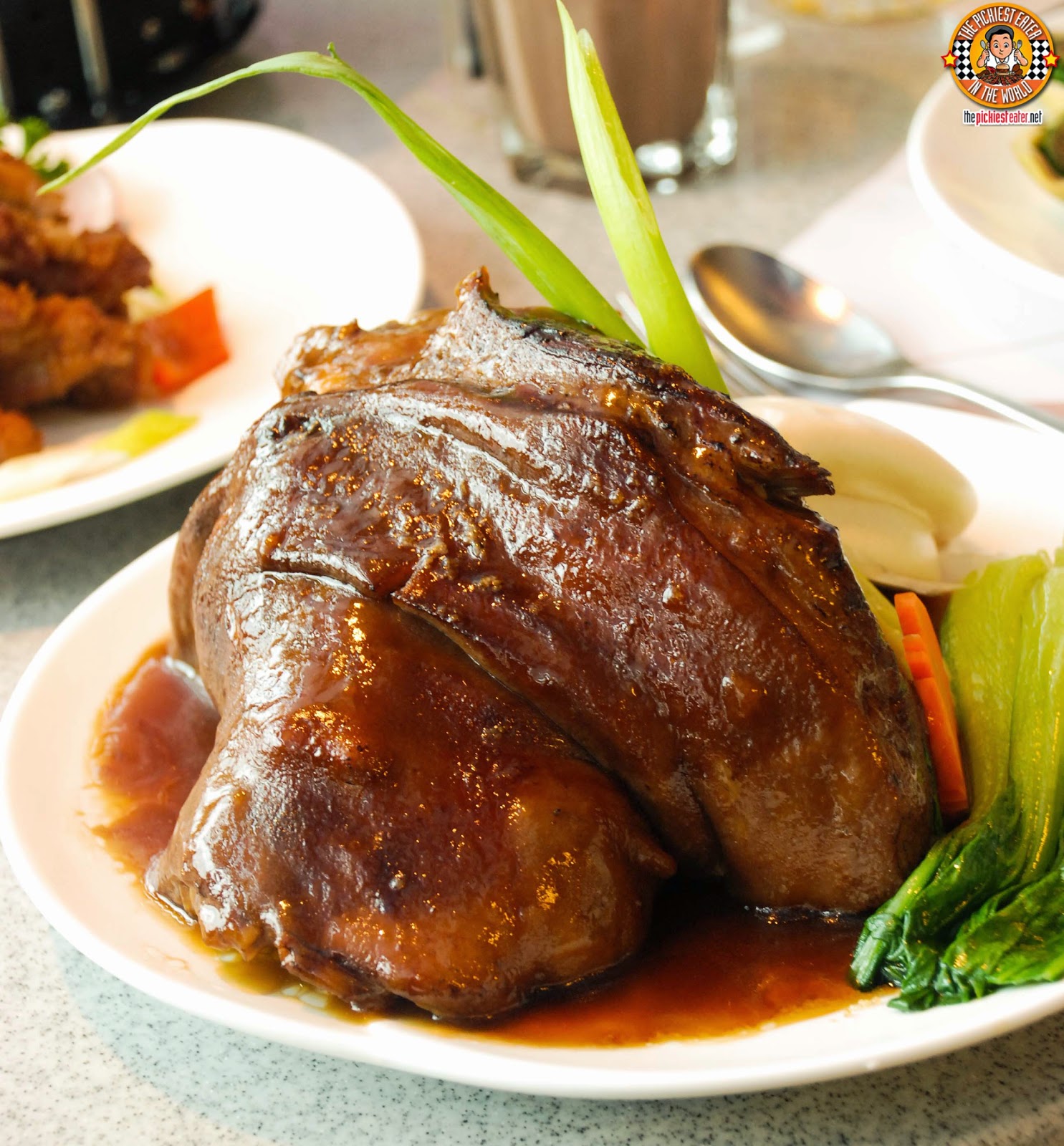 The other dish that was a hit among me and my blogger friends, was the Pata Tim. The meat was remarkably tender, and bathed in a sweet sauce that mixed well with the rice.

Whenever I go to the Buffet, I feel that attacking the Carving Stations are the best to get my money's worth. By filling up on slices of Rib Eye, Lamb and the like.

I must say, I was very much impressed with what Viking's Carving Stations had to offer. It was actually better than some Hotels I had been to. 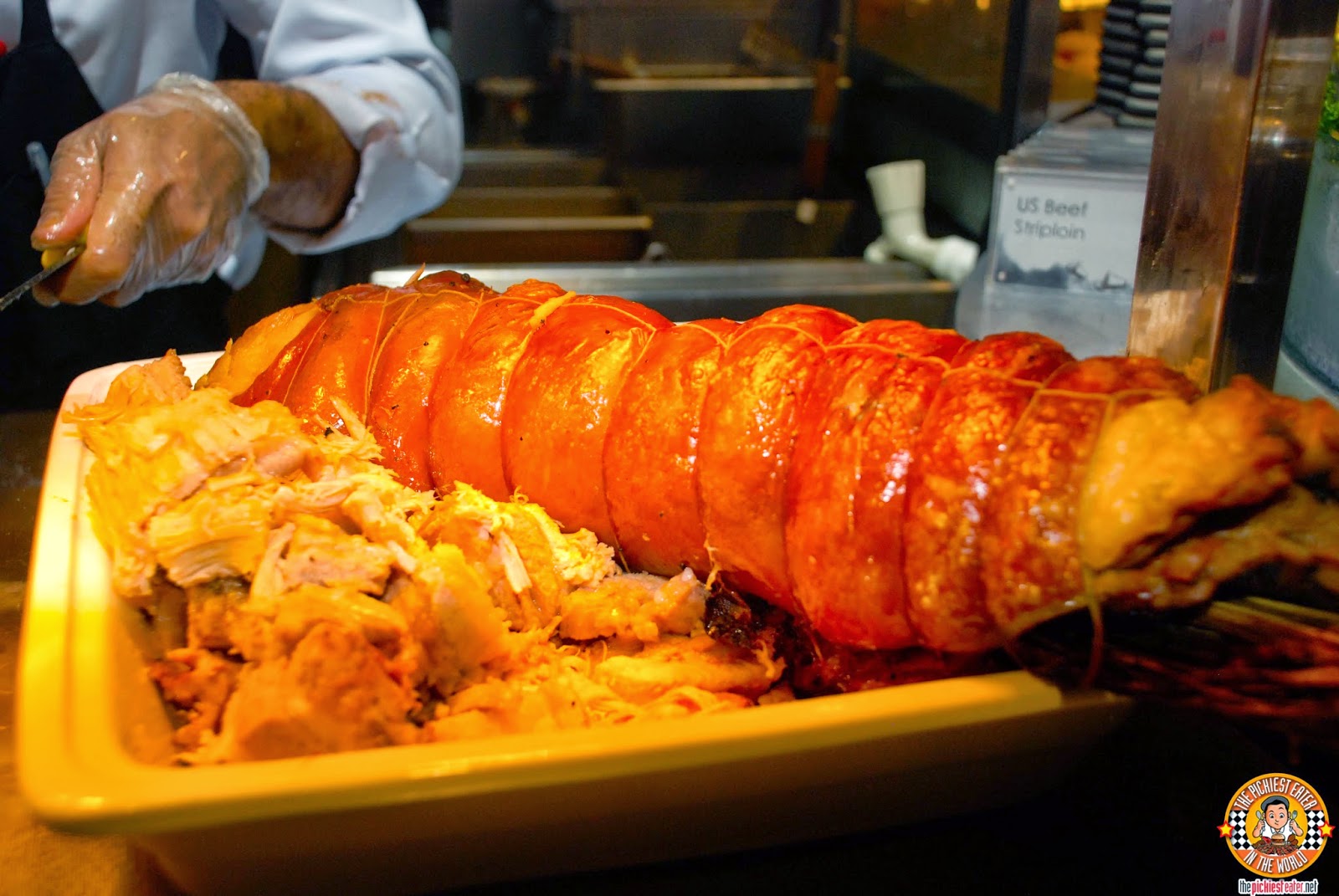 I first attacked the Vikings Boneless Lechon, and I found it quite good. I'm a little bit biased though, because I'm more particular to the the Visayan style of Lechon that packs loads of flavor even without sauce. Nonetheless, it was definitely worth visiting. 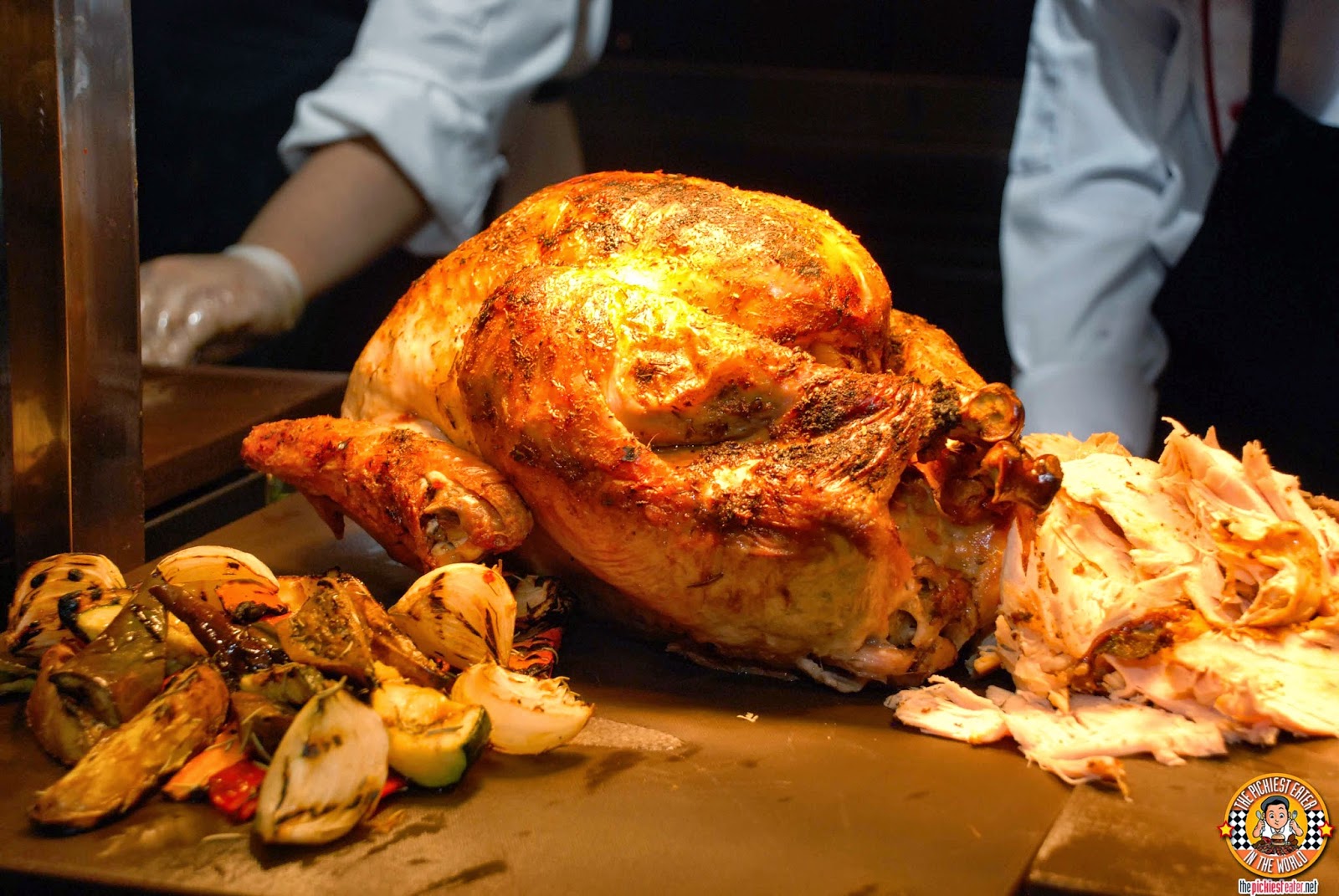 I made sure to get just a little bit of the Roast Turkey. The white meat was a tad dry, but the dark meat was all right. Although the cranberry sauce was adequate I would have enjoyed this more with some sort of bread stuffing. 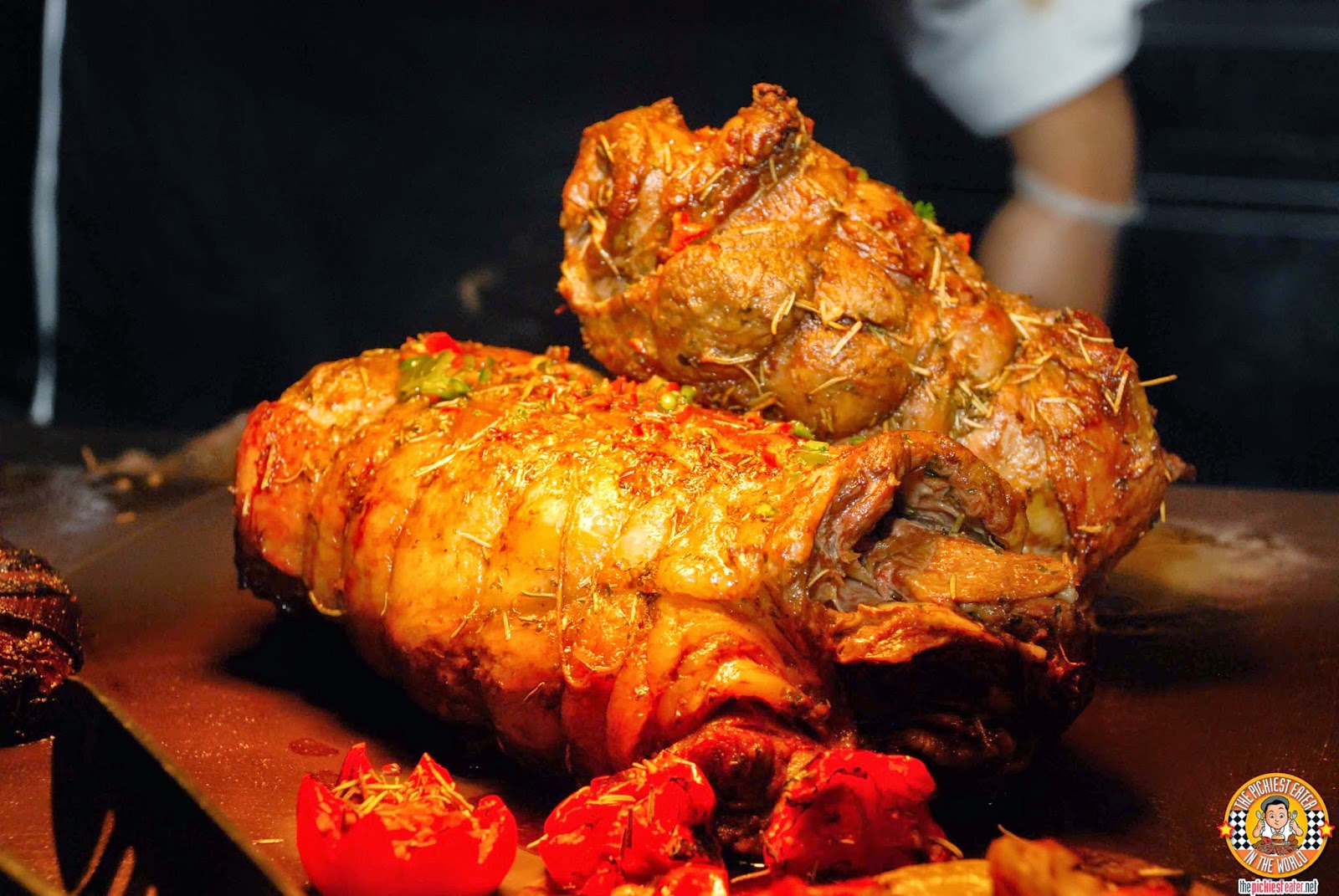 If you think that Vikings serves cheap, low quality food, The Rosemary Baked Leg of Lamb will debunk that notion after one bite. The lamb was very tender and juicy, and covered in a mouthwatering layer of fat.. Just the way I like it! 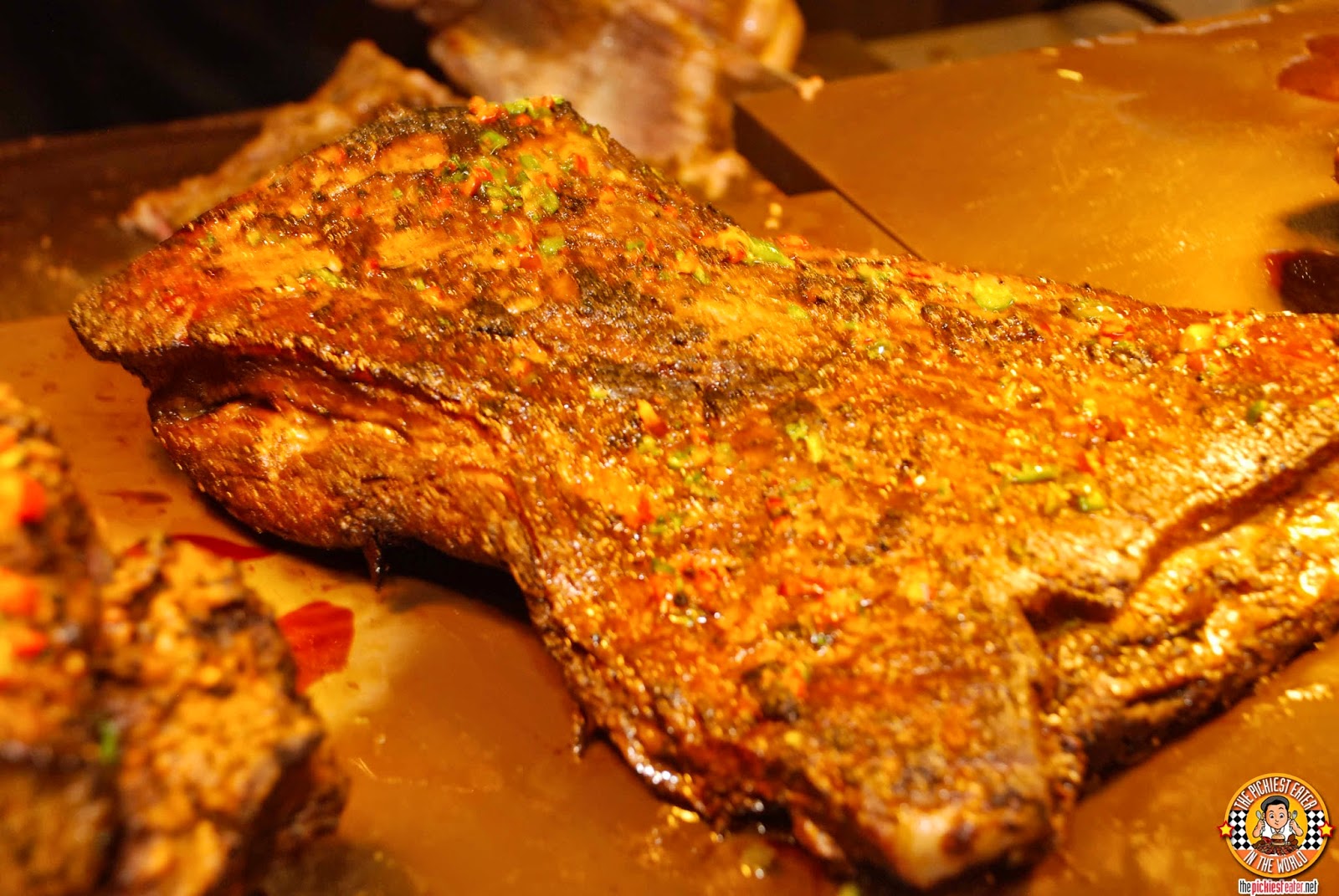 The Texan Beef Brisket was much leaner, but just as tender as the lamb. It was quite a sight watching the brisket being sliced, with the natural juices of the meat pouring out.. Considering how much you're paying, and what your getting in return? This was nothing short of AMAZING for me. 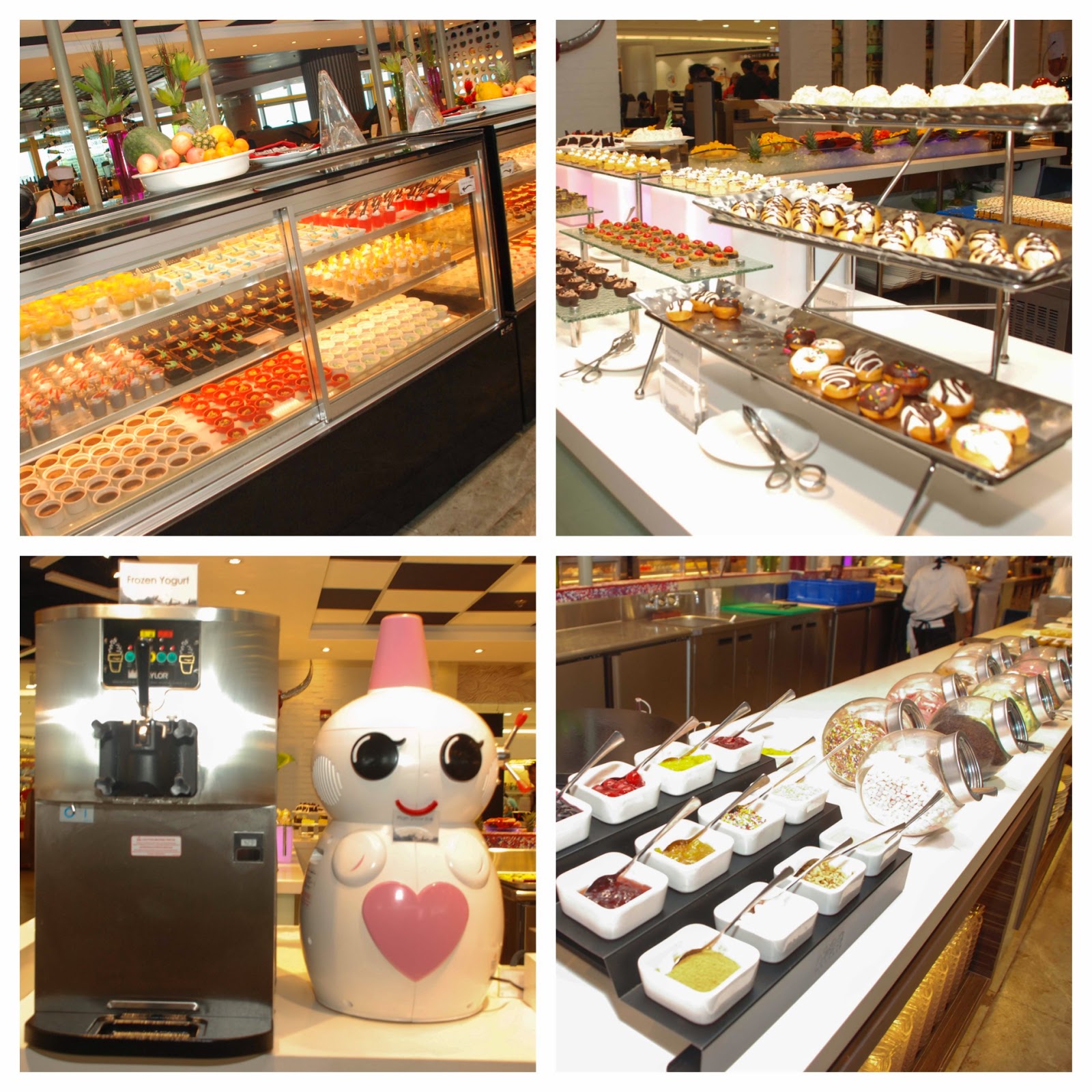 Like most buffets, the quality of desserts ranged from average to good, but your options almost felt limitless. You can choose from a wide array of Cakes and Petit Fours, or you could customize your own Ice Cream Sundae, or make your own Crepe! For those who are a little more health conscious, you could even opt to create your own Frozen Yogurt treat! 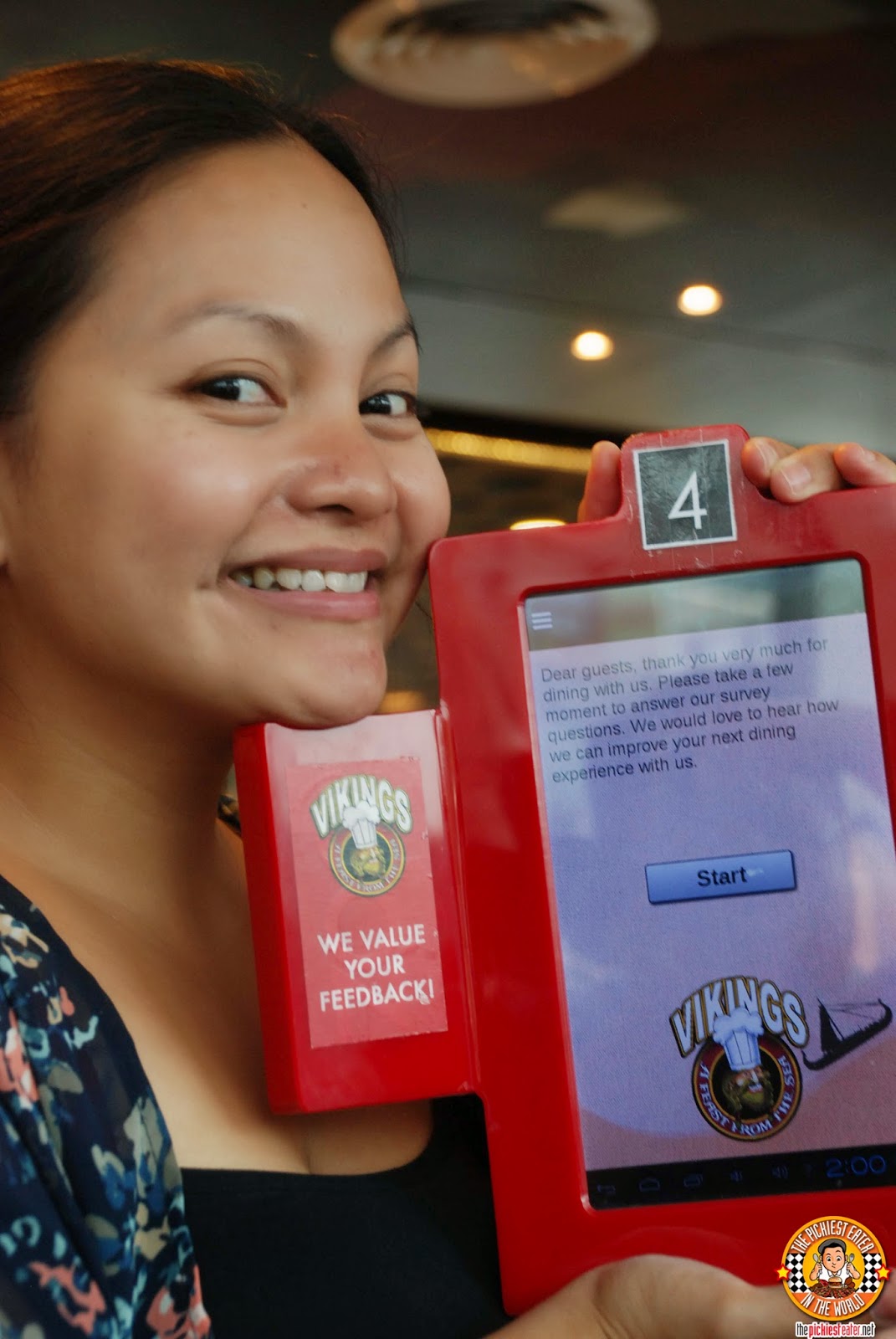 Customer Feedback is an integral part of what makes Vikings work so well with the public. As a testament to that, the waiter handed Rina a Viking's Tablet at the end of the meal, which allowed her to punch in her thoughts on her experience eating like a Viking! 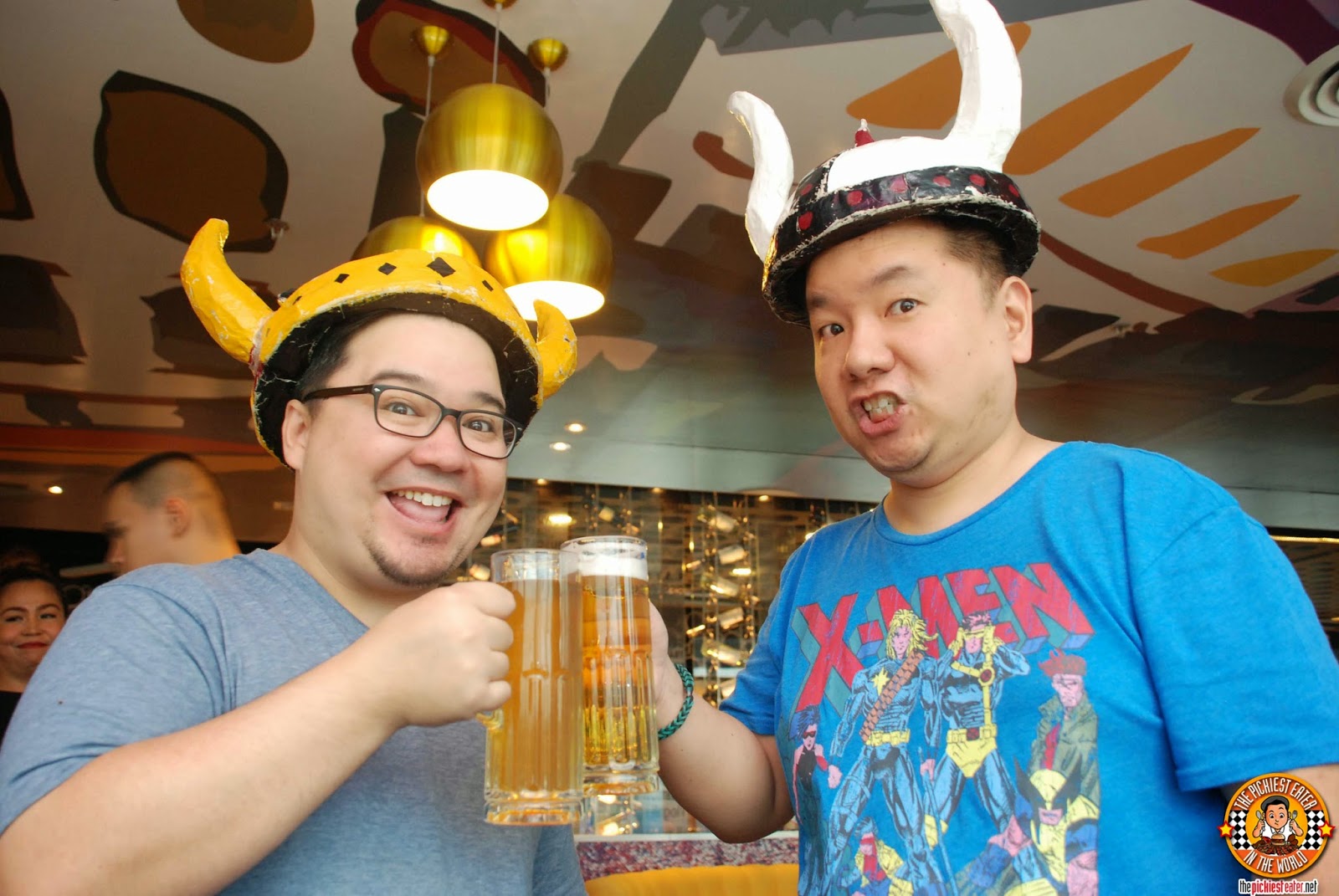 Us Bad-Ass Vikings raising a toast before slamming down our flagon filled with... umm..
Apple & Cinnamon Iced Tea

I think it's great that restaurants such as Vikings is making the feel of luxury dining more affordable to the people. I've always felt that there is a special bond share when dining together, especially with friends and family. Though it often need not matter how fancy the place is, it's refreshing to see that there is an affordable alternative when wanting to dine at an eat all you can buffet.

Can it go head to head against places such as Spiral? Definitely not, but Vikings shows that you need to break the bank for a Buffet, that perhaps may not have have the sophistication of a hotel, but neither are they a slouch in the quality department either. 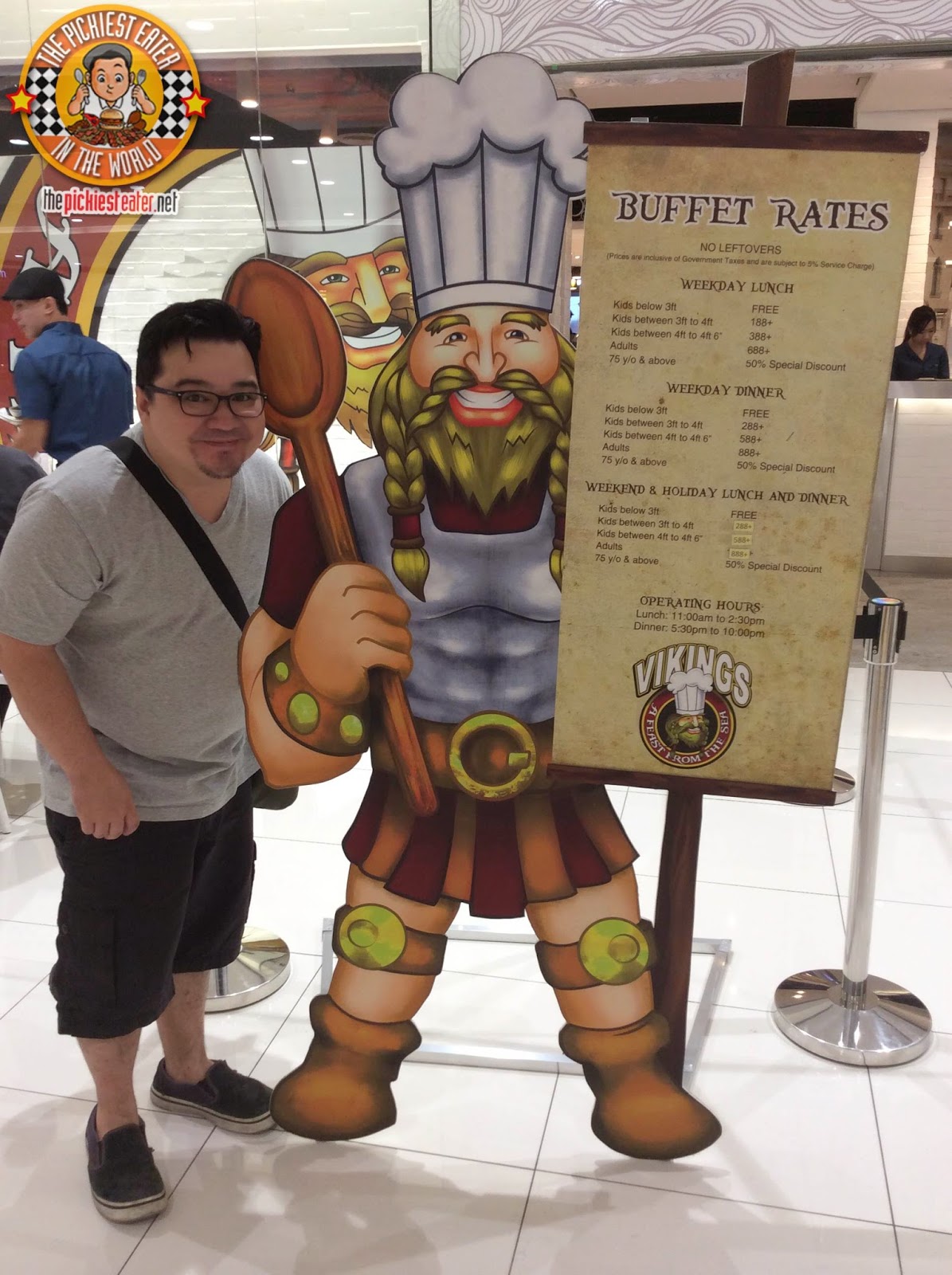 Posted by The Pickiest Eater at 11:39 AM