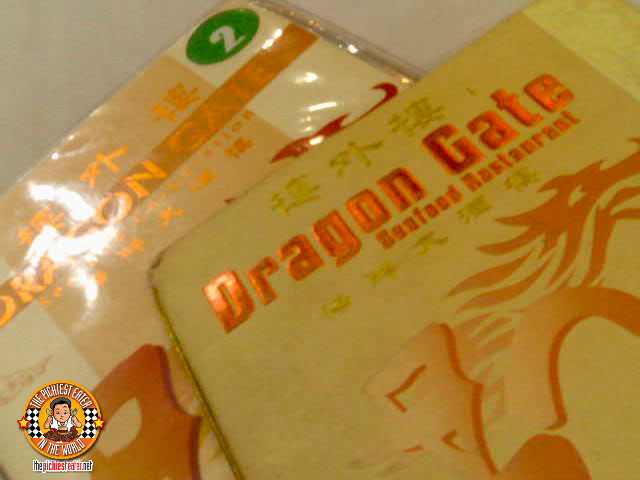 If you haven't been to the restaurant "Dragon Gate Seafood Restaurant" yet, i suggest you log off and make your way to Roxas Boulevard RIGHT NOW. (Forget your job.. you can always apply somewhere else).

One dish & one dish alone - The Mixed Meat with Sesame Bun.

I'm telling you.. it's so good, I've decided to give it the first ever "Pickiest Eater One Of The Best Things Ever" award. (I didn't have much time to think up of a name) Pretending to read menu but we all know what i'm gonna order..

(believe me, I tried) I went there a few years ago with my Boss. I'm lucky to be working for a man who loves to eat, so I always get to tag along when he goes to these far out places. He sometimes orders really strange stuff, like turtle or frogs legs (yes, he's Chinese, how did you know?) but he always remembers to order me sweet and sour pork because he knows I'm a picky eater hehe. This time, however, he said he wanted me to try this "Mixed Meat" first before I ordered sweet and sour, because he had an eerie feeling I'd like this. And boy was he right. I was so full there was no room for anything else in my stomach. I was worried that even a tic-tac would've made my belly explode.

After raving about it for months to Rina,  we went there one Sunday fyi (pix are from 2006) because i really needed Rina to try what I had been telling her was one of the best things ever.

Dragon Gate is fairly large, but it is quite popular among the Chinese families, so it does have the tendency of getting filled up during meal hours. They do have a large parking lot beside their building so that's a bonus. (I haven't been there in years though, so I wonder if they actually do still have it?) 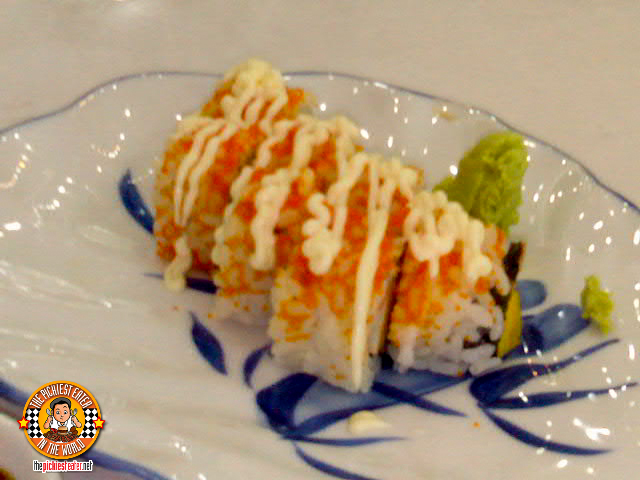 California Maki at a Chinese restaurant.. talk about "Chop Suey"

When we got there, they had a "Japanese Festival", where they served  different dishes. Of course, since I'm not into Japanese food, I didn't even bother to take a look at what they had to offer, but Rina ordered their California Maki and seemed to love it.

I on the other hand, found it weird that a Chinese restaurant served California Maki, but that's just me. 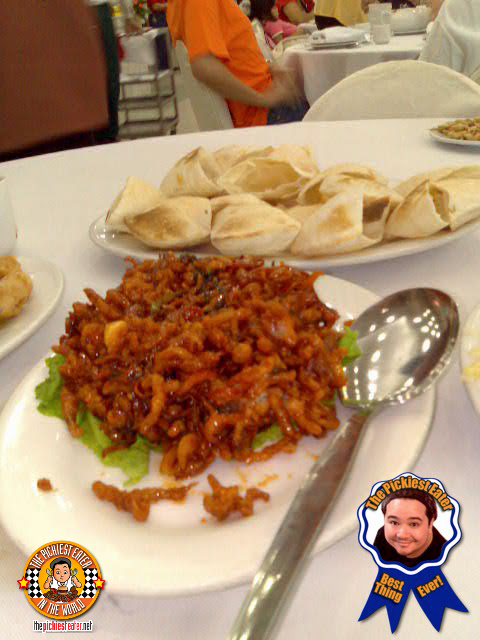 Don't think.. feeeelll... It's like a finger, pointing to the moon..

The Mixed Meat with Sesame Bun is actually shredded pork, that is deep fried and caramelized into a perfect blend of sweetness and crunchiness, that you place into a freshly baked sesame bun. The bun is honestly the perfect partner for it because as good as it is, I can't imagine eating it with Yang Chow fried rice. (I tried) 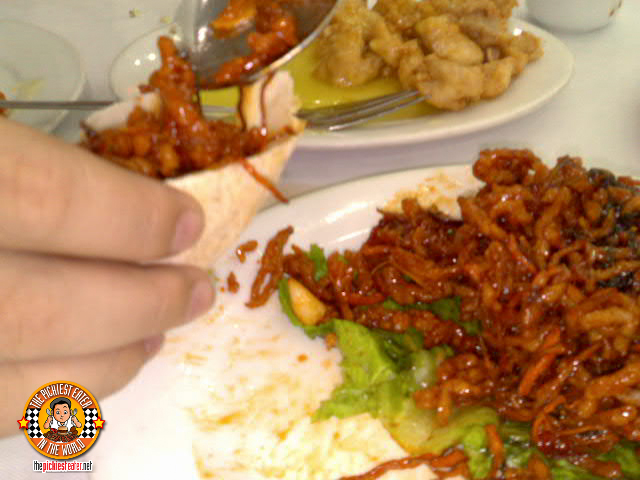 Do not concentrate on the finger or you will miss all of the heavenly glory..
You just get a spoonful of meat, (In my case, two or three spoonfuls) dump it into your bun, grab a bite, and let the awesomeness commence. Perhaps the only drawback is, since the meat is caramelized, when it eat too much of it (like I do), your jaw gets kinda sore from chewing. But you'd have to eat a lot of it in one sitting for that to happen (like I do). We ordered Lemon Chicken as well, but it honestly wasn't anything spectacular. I'm telling you, here at Dragon Gate, it's all about the Mixed Meat. They also do have a good Native Chicken soup, if that's your thing.

Regarding the price, the Mixed Meat dish ranged from P350 to P450 (I don't remember exactly because it was so long ago), but it's definitely worth it, especially since it comes with so much sesame buns. You can order more buns if needed, but they will ask you if you're willing to wait but you'll be guaranteed to get them fresh and hot. 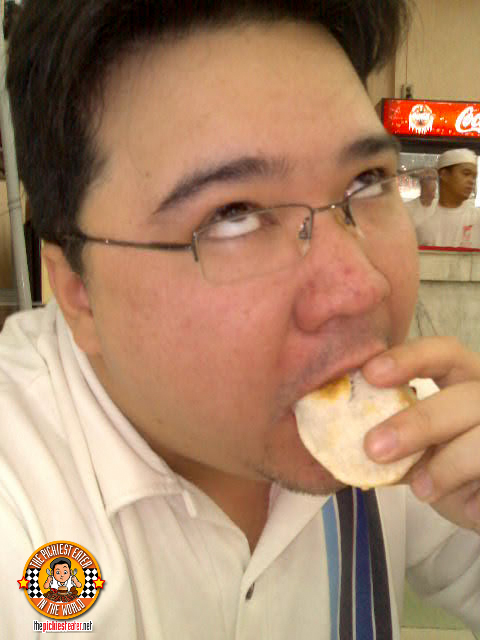 Just had a foodgasm..

I seriously do need to go back here very soon. Looking at this post is making me very hungry.