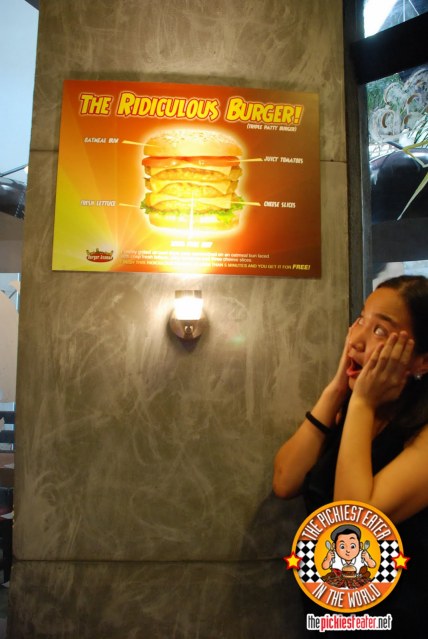 Me and some of my best buds visited Burger Avenue intending to do a feature on it on a website we were developing, which "The Pickiest Eater" was actually supposed to be a part of. My Giant, Joel is friends with the owners of "Burger Avenue", and they were more than willing to help us out to find stuff to feature on.
Their original A. Venue is admittedly quite cramped, but their location at The Fort is a whole lost cozier, so that's where we decide it would be best to "Shoot".

We were joined by Rina's former office mate, Glen, who, (despite being on camera for the first time) was a natural, and turned out to be a great "Host" for the segment (Thanks Glen!). 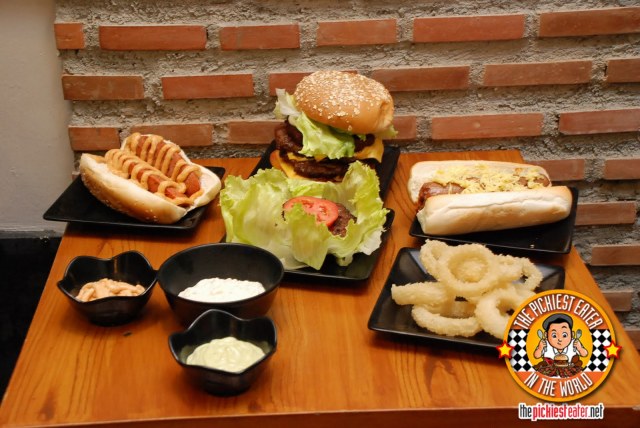 My tummy is growling just looking at it.


Burger Avenue's no-frills menu consists of food items that everyone would enjoy. Not in the mood for a burger? Have a Frankfurter! Staying away from red meat? Have a Chicken Salpicao Sandwich! Seafood is more to your liking? Have a delicious Tuna Melt! Want to cut down on Carbs? Have a "Sexy Burger". The beauty of it is actually in its simplicity. They're not gonna blow your mind away with different types of herb-based sauces and dips.. but instead they'll give you straight up dishes whose flavor speaks for itself. How good is the food? Well, lets put it this way. There's a gym right beside them, right? The same people who were busting their guts on the treadmill 20 minutes ago, are often the same people you see wolfing down a huge greasy burger minutes later! They plain and simply just couldn't resist. 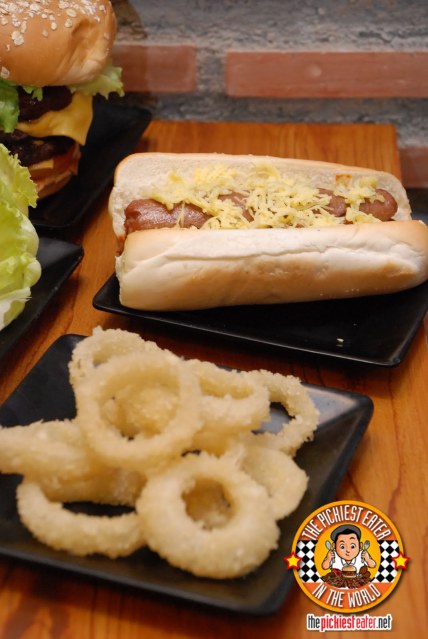 Rina would give me the onion rings, and take the Frankfurter for herself.

Burger Avenue makes some very good Onion Rings (P55). Granted, it's not as good as this one place in particular that I plan to cover very soon, but it has a great balance between the crispyness of the coating and the juiciness of the actual onion. When dipped in mayo, prepare to be addicted. I honestly recommend it more than their french fries, which is the thicker cut type that I don't enjoy as much.

The Frankfurter (P195) was basically a big, juicy hotdog that they loaded up with liberal doses of grated cheese. It was actually pretty good, especially with Mayonnaise, but nothing that truly stood out. 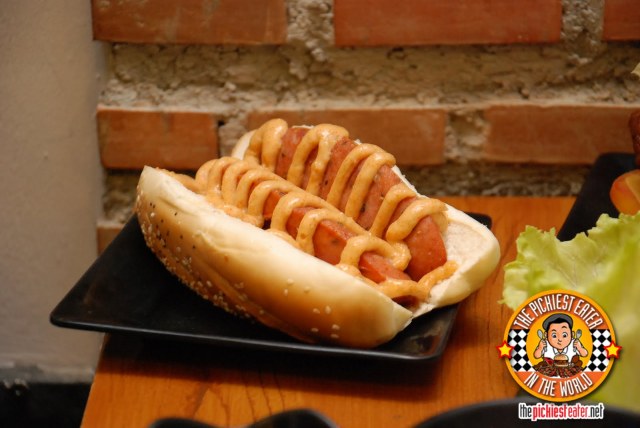 Too Spicy for me

If you're into Spicy food, then the Hungarian Sausage (P195) would definitely be right up your alley. The Huge peppercorns on the sausage are visible from miles away, and they pour so much of that spicy cream sauce unto it, you're going to need a fire hose to clear the heat away. Admittedly, I might not be the best judge on spiciness because my tolerance is very low, but It might not be so bad for others. 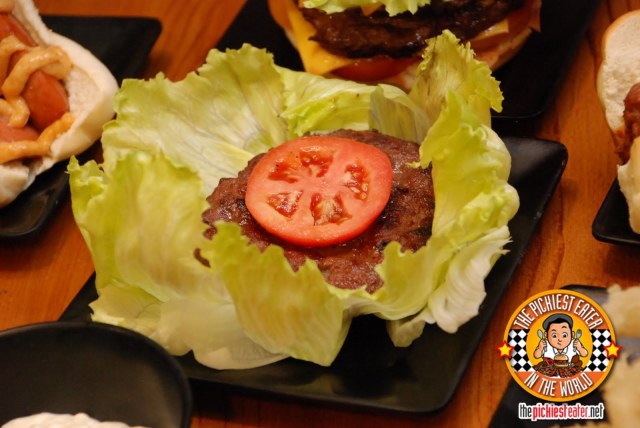 Thanks, but I'm sexy enough.

You could say that the "Sexy Burger" (P128) was a product of the owners of Burger Avenue's guilty conscience. After unleashing a gastronomic juggernaut that is the Ridiculous Burger on to the world, they decided that they should try to make up for it, with something "healthier". The star of this show is the all beef patty that is perfectly grilled before laid on the bed of crisp lettuce and topped with a tomato. Of course, on a personal level, if I'm going to Burger Avenue, it's understood that i've thrown all sense of healthy eating out the window, so I wouldn't order this. 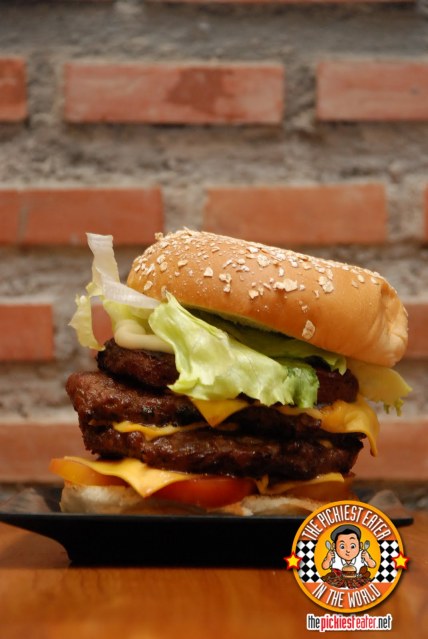 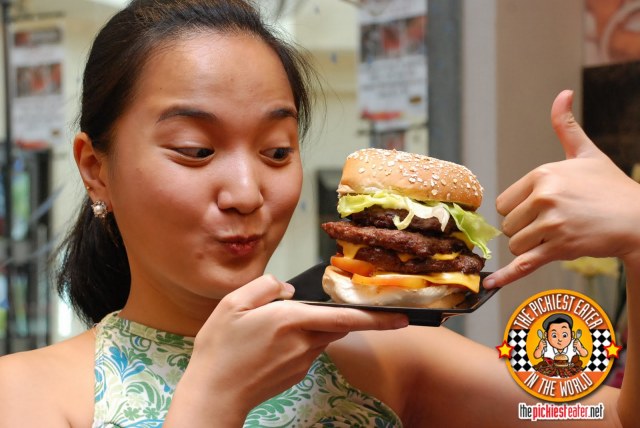 If you're planning to take the challenge, I strongly suggest you break it apart and devour it in sections, because holding the sucker with two hands and chowing it down without the guts spilling out would be next to impossible. Our dear Glen tried the challenge, but it only took seconds for her to realize she was way over her head. Oh and for those gluttons out there.. you're only allowed to take the challenge once (so if you were thinking of getting more freebies, sorry :P). 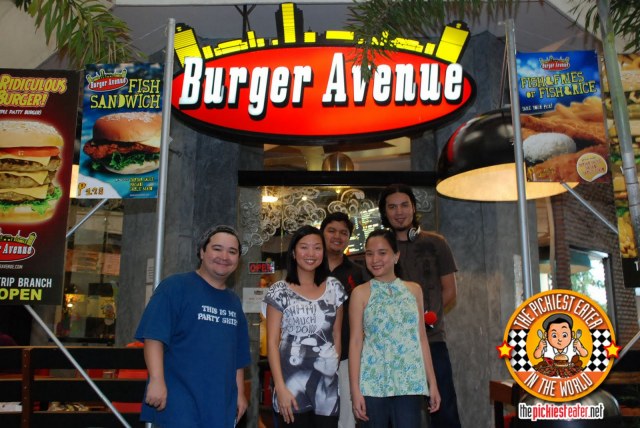 (Burger Avenue Co-owner, the lovely Kim with Me, Mark, Joel and Glen)

When I go to Burger Avenue, my weapon of choice is the Crispy Bacon Melt (Surprised? I didn't think so), but they have other items, such as the Fish Sandwich and the Tuna Melt that are really good as well! Oh and I enjoy their milkshakes too! It's also one of the few places you can count on to be open late at night (They close at 2am), which adds to its popularity.

Without a doubt, Burger Avenue makes a strong case for the title of best Burger in the land!


Stay tuned for the next episode of Burger Wars!
Posted by The Pickiest Eater at 12:09 PM