NO WORK & ALL PLAY AT KITCH' CAFE! 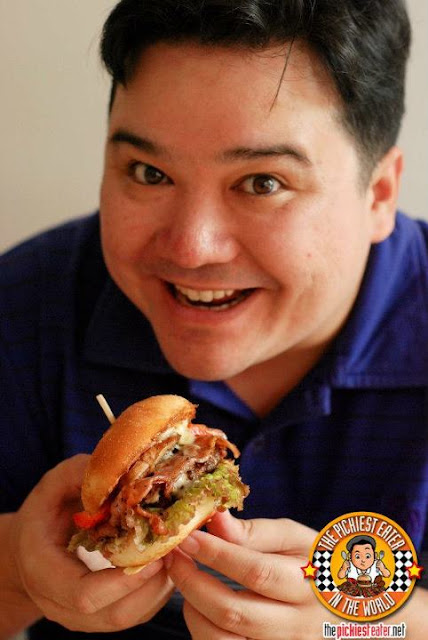 "It was a million tiny things, that when you added it all up,
meant we were meant to be together..."

Since we've moved our office to Arnaiz Ave, I've been talking about how much I miss the food choices near the area of Palanca Street. Sure, I've got perhaps the country's best Ramen restaurant a few steps away, but as much as I love a steaming bowl of Miso Char Siu, the REAL me still looks for some of the regular food that I've come to know and love.

Sometimes I look for a good old fashioned greasy burger loaded with bacon and melted cheese. Maybe some beef tapa with a generous lining of fat, and a scoop of rice. Or if I don't want my meal too heavy, perhaps I could go for a unique type of pasta that isn't tomato based for a change. And then i'd end it all off with a rich, yet not too sweet slice of cheesecake, drizzled with nutella sauce.. and I want all of this, walking distance from my office.

Now tell me, Is that too much too ask for? 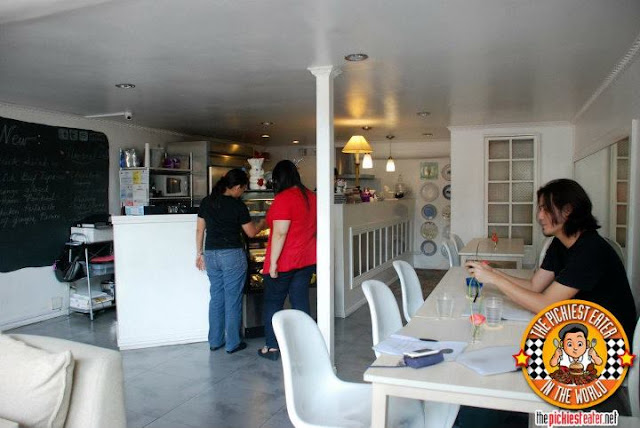 After a chaotic past two weeks in the office, my giant Joel, and my friends Rain, Mel, Donna and Ella decided that we deserved to reward ourselves with a good meal. Rain had been hearing about good things "Kitch Cafe" from various websites, and considering it was just a block away from our office, I was eager to find a new place to eat (As much as I love Pancake House's Pan Chicken, If I have it one more time, feathers are going to start sprouting out of my ass). The restaurant is a very cozy spot to hang out in. I honestly felt more like I was hanging out in a friends house than in an actual cafe. 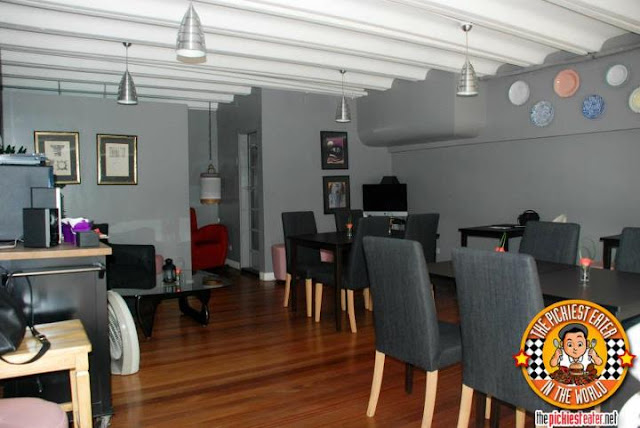 Though the ground floor area is a little bit small, don't let that deter you from bringing a large group of friends to Kitch Cafe. The second floor can actually seat more guests when needed. The second floor really looks like a Bachelors pad as well. I can imagine myself throwing in some bean bags in front of the TV and spending the whole day there munching on their baked treats. 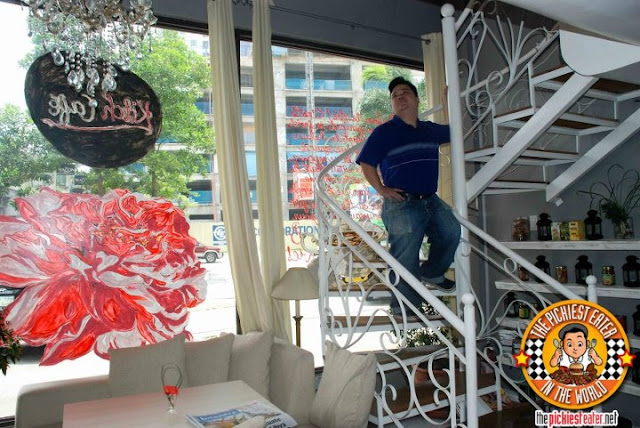 To get up to the second floor, you've got to go up their mini Spiral staircase made you feel like you were in an episode of "Falcon Crest". All in all, Kitch Cafe successfully captured a cozy, yet "artsy" cafe, without looking pretentious. 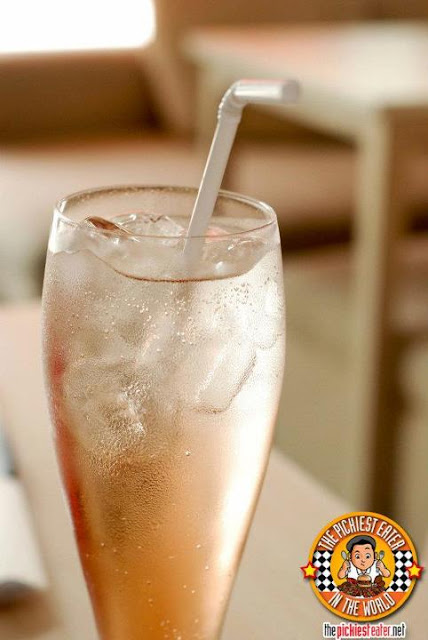 To start things off, Rain ordered a Raspberry flavored soda (P120). They actually have other fruity flavors, but Rain doesn't remember what they were, because apparently the waitress had her at "Raspberry". It wasn't too sweet, and it did capture the flavor of raspberry. A nice drink on a sunny day. 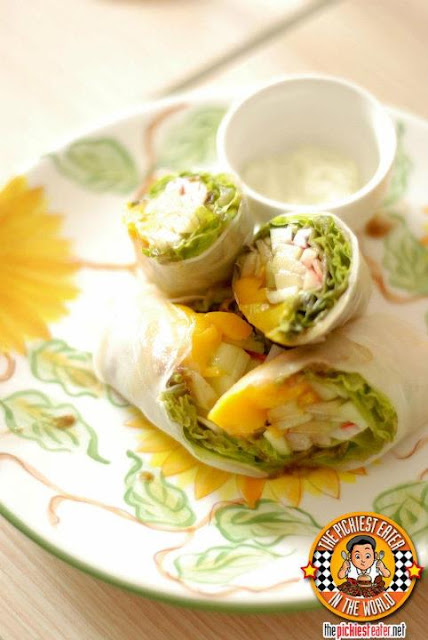 Joel ordered their Kamikazee salad as his appetizer, and our friend Ella ordered it as her main course (Women.). It's Mango, Kani, Cucumber and lettuce, mixed in with a honey mustard vinaigrette and wrapped up in what I assumed was rice paper. Since it's a salad, I didn't go anywhere near it, but Joel seemed to dig it. He had one piece left, which he gave to Rain, and she said she also enjoyed it. She said it was a nice spin on your usual Kani salad. All I could say was, "There's such a thing as Kani Salads?". 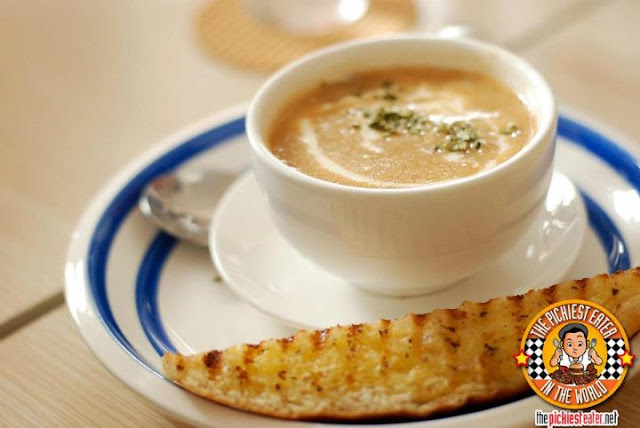 Rain ordered the Seafood Chowder, and from the smell alone, she absolutely loved it. The soup had a dreary color to it, but was brightened up by the swirl of sour cream around it. It was only when Rain said "Do you want a bite of the bread?" did I realize I was staring at her garlic bread (and drooling). 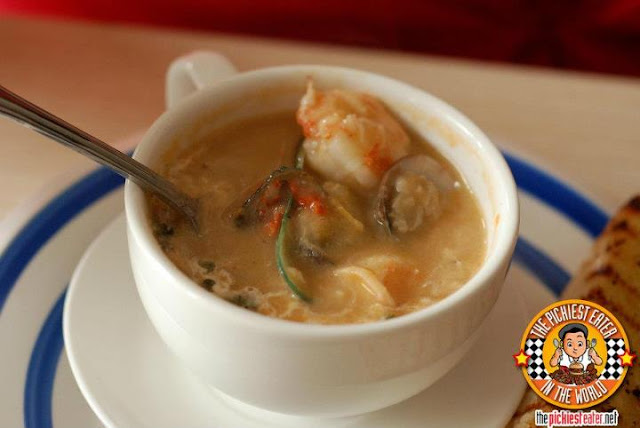 I heard a gasp of delight from Rain, the moment she dug her spoon into the bowl of soup, because it had a generous medley of seafood in it. From Shrimps and Mussels (I couldn't sworn I saw a shark somewhere in there), she could have very well have poured this over a bowl of rice and have a filling meal. This was perhaps the first time I heard someone tell the waitress, "May I have a fork please? I want to eat my soup." 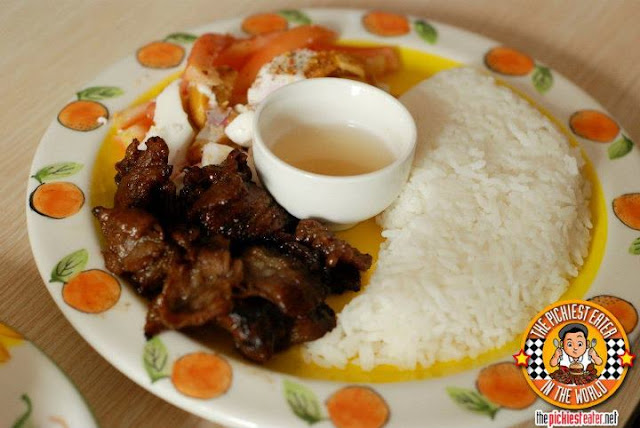 Joel ordered the Kitch Beef Tapa (P160), which came with salted egg as well. They were thinly sliced strips of lean beef that were fried beautifully. Joel said that it had a light spicy kick to it that enhanced the flavor of the beef, and would definitely go back for it again. 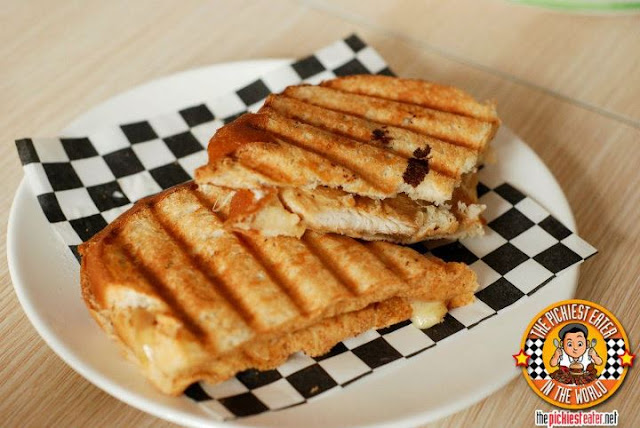 Rain's order was a Chicken, Portabello and Gruyere Cheese Panini (P245). Plating wise, it looked a little boring (it could've used a handful of potato chips or fries on the side), but Rain said it was quite good. All the individual components- the cheese, mushrooms, chicken and bread worked well together, but however, she wasn't a fan of how the "mayonnaise" seemed to make the sandwich sweeter (There's a chance that the "mayo" could have actually have been "Aioli" sauce). 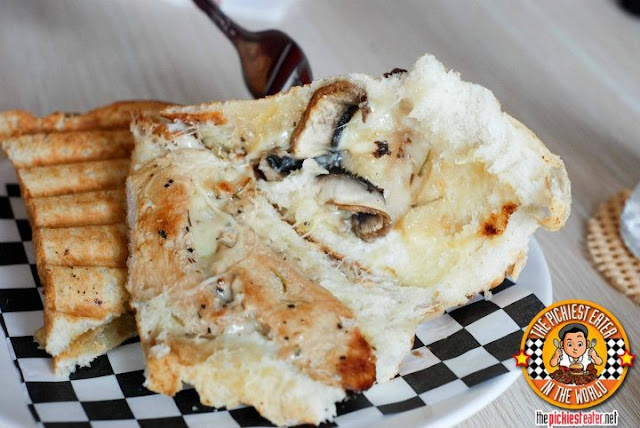 I ripped open the sandwich (with Rain's permission of course.. The last time I did that to someone without asking, I almost got thwapped) to find a beautifully grilled piece of chicken, and a moist panini bathed in melted cheese, as well as large Portabello mushrooms. 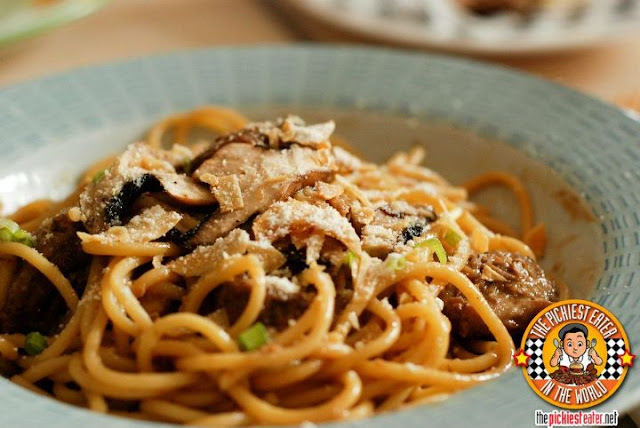 My buddy Melvyn arrived and ordered what the waitress described as their best seller - Adobo Cream Sauce Pasta (P220). When it arrived, Melvyn brought up a very good question.. Why would they call it "Cream Sauce" when it seemed to be oil-based? Semantics aside, it's a very good adobo, (although a little high in the vinegar content for my liking, but then again, thats what adobo is), laid on a nice bed of pasta. The clincher of this dish though has to be the pork, because it simply melts in your mouth with every bite. I would gladly order this again, however I'd probably have to share it with someone, because If I eat this in large doses, i'd expect an acid attack later within the day (Totally worth it though). 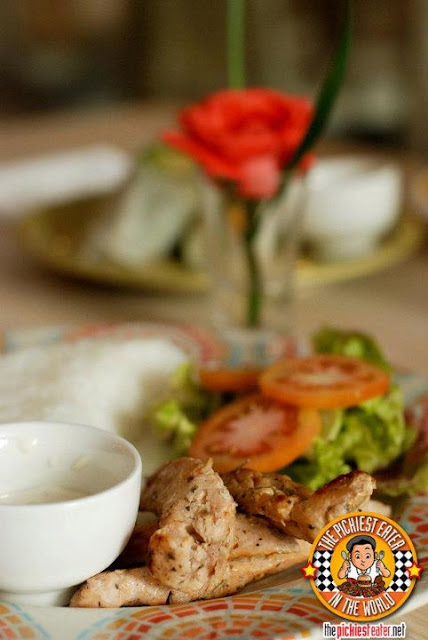 My friend Donna ordered the Pan Grilled Pepper Chicken With Aioli Sauce (P150). Even by just looking at it, I could tell it was a little bit on the dry side, but Donna didn't seem to mind, because she drowned it in the aioli sauce and it solved the problem for her. It also came with a small side salad, which she loved. 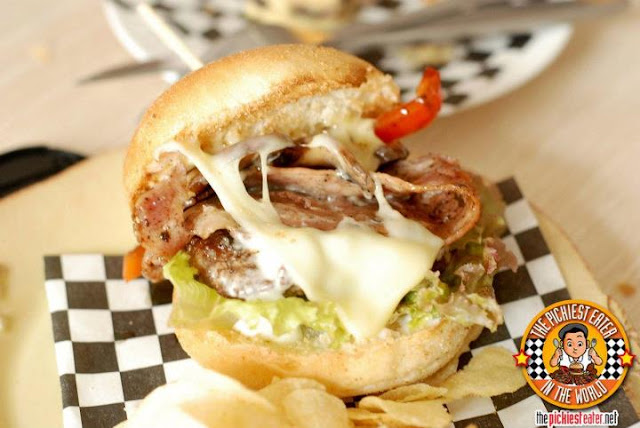 With my original order not being in stock (Maple Glazed Lamb Salpicao), I had to go for my back up plan, which was the Kitch' Burger (P265). Usually I take a look at the inside of a burger before chowing down into it (I don't like pickles, cucumbers and tomatoes in mine), but this burger looked so darn good, there could have been an old leather shoe inside and I still would have bitten deep into it without a care in the world.

The burger consisted of a beef patty that supposedly weighs over half a pound, swimming in Melted Cheddar Cheese, Portabello Mushrooms, fried Bacon on a large Pan De Sal Bun, and slathered in Aioli Sauce. It was so fully loaded, with vibrant flavors I didn't even realize that I ate the veggies in it (Lettuce and Capsicum)! Admittedly, it's a little bit on the greasy side, if that sort of things bother you (It doesn't bother me one bit), but other than that, I've got to say that it's absolutely delicious. 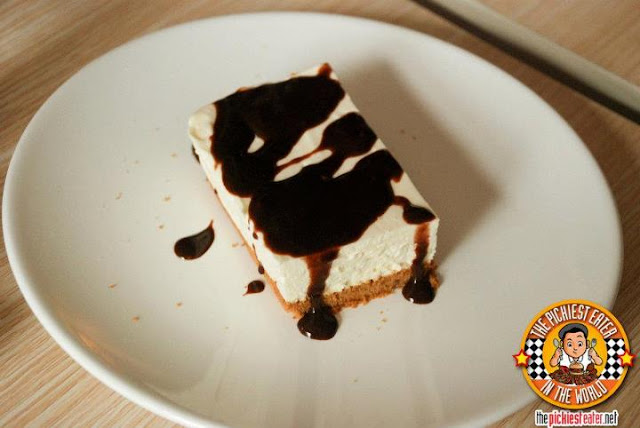 I told myself I wouldn't be ordering dessert anymore, but when I saw that they had Nutella topped Cheese cake (P85) on their menu, all bets were off. Even Joel, who swore he didn't have any room for dessert thirty seconds before the plate of cheesecake was placed on the table, couldn't resist digging in. The cheesecake base wasn't overly sweet, and had the right subtle flavor to it. While the Graham crust, although a bit softer than what I'm used to, was buttery delicious. In fact, the Nuttella topping was perhaps the dish's weak point, because even without it, It could stand on its own. 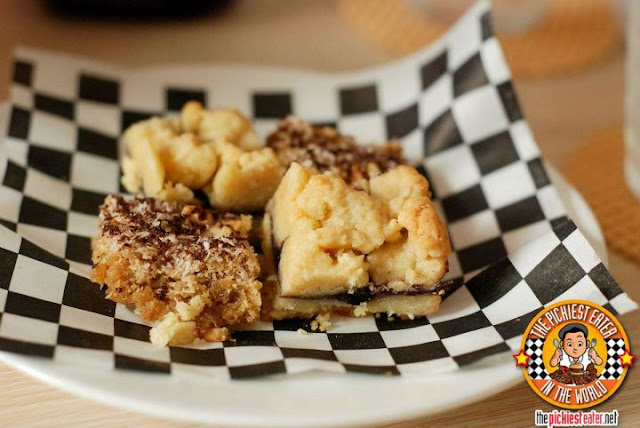 Since it was our first visit, the very friendly staff of Kitch' Cafe also gave us a free sample of two of their baked goodies, The Ultimate Blondie and the Blueberry Streusel Bar. Both were really good, and made me contemplate wearing a disguise the next time I go back, in the hopes that they think i'm a first timer again.

Having Kitch' Cafe open so near to my office was like getting an early Christmas gift from the food gods. Great ambiance, reasonable prices, and a wide array of Breakfast/Lunch/Merienda/Dinner dishes to choose from, If i'm not sitting in my desk at work, my office mates will know where to find me. 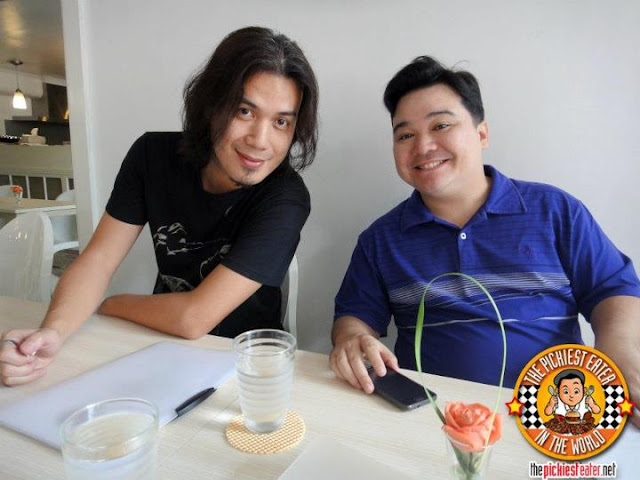 My Giant Joel and I with our grumbling tummies.
(Mine was louder) 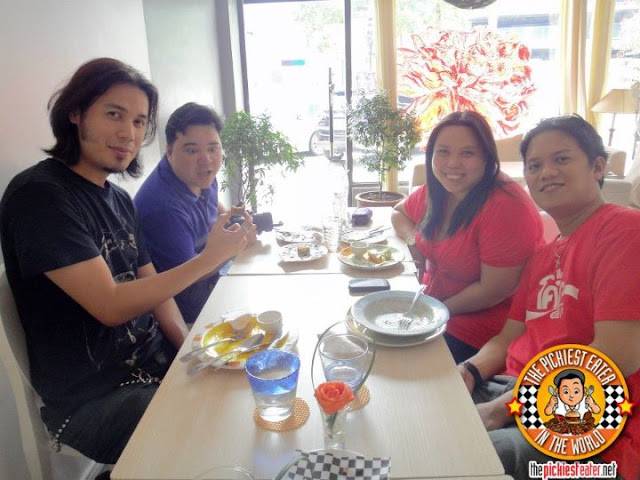 Rain, with her Tall, Dark and Handsome dates for lunch.
(Joel, Mel and I all have our individual attributes that applies) 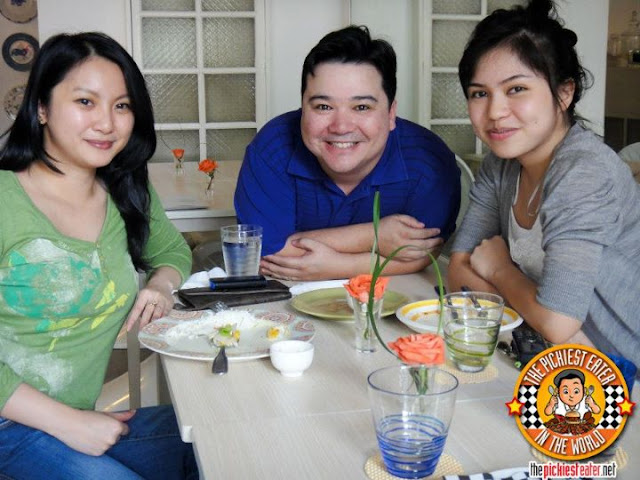 I was minding my own business when these two hot chicks
asked to take a picture with me.
Can't a guy enjoy his lunch in peace?!
(Actually, they're my office mates, Donna and Ella) 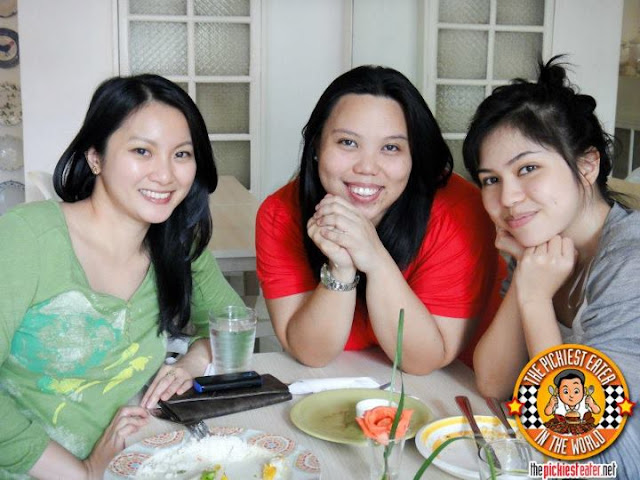 The lovely ladies of PostManila

Posted by The Pickiest Eater at 12:04 PM