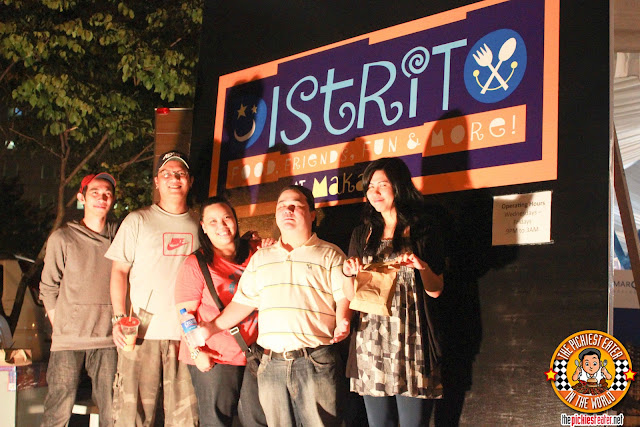 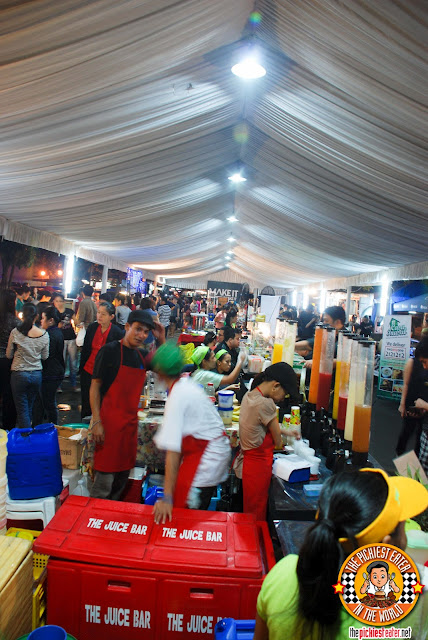 With the elegant interior of the tent's roofing, Distrito looked like what I had imagined a Persian Bazaar would look like. Given that their location is much smaller than that of Mercato Centrale,  they made the most of the space that they had, dividing the area into three aisles, which even include a few stalls selling garments.

"What garments?", you ask? Sorry, then you're reading the wrong blog, because I was there for one reason, and one reason alone. 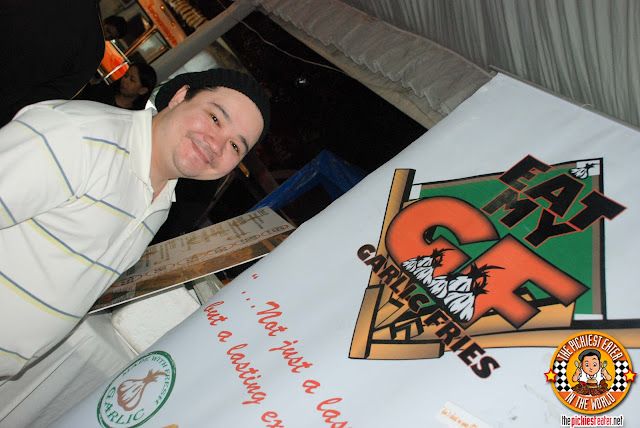 I hadn't been to Eat My GF since the first time I discovered them in Best Food Forward early last year. Since then, I've been wanting to try their other added dishes, namely their sausage sandwiches. It was nice that I got to see Kim, the owner of Eat My GF there at Distrito, and he recommended that I try their Garlic Sausage. 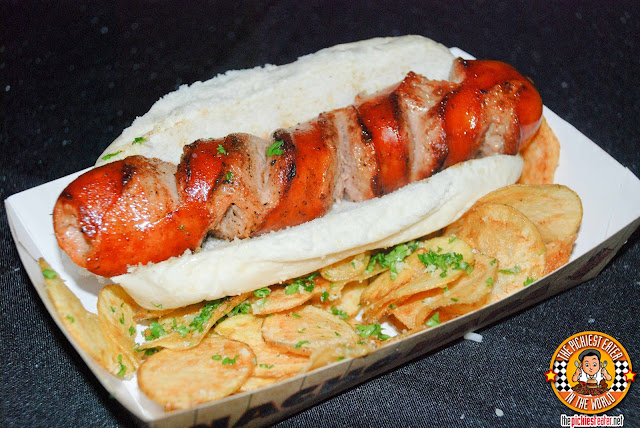 Since I had already tried their fries, I wanted to get a taste of their potato chips. Though it wasn't as hot as I was hoping it would be, it still was deliciously crunchy and had the same garlicky kick as it's french fry sibling. I also thought the garlic sausage wasn't very "garlicky", but it was really juicy, and had a wonderful meaty flavor. The sausage meat itself was soft, and its casing letting out a nice crack with every bite.


Another thing they did right was their choice of their Hotdog Bun. I'm very finicky when choosing sliced bread, or Hotdog and Hamburger buns (Gardenia is by far the best you can get at your average grocery), and whatever it was Eat My GF used, passed my standards with flying colors. The bun held together well as a base for the hotdog, but you could tear through it cleanly without it leaving a dry taste in your mouth.


Even Sausage connoisseur (sounds weird) Rina gave it her stamp of approval! 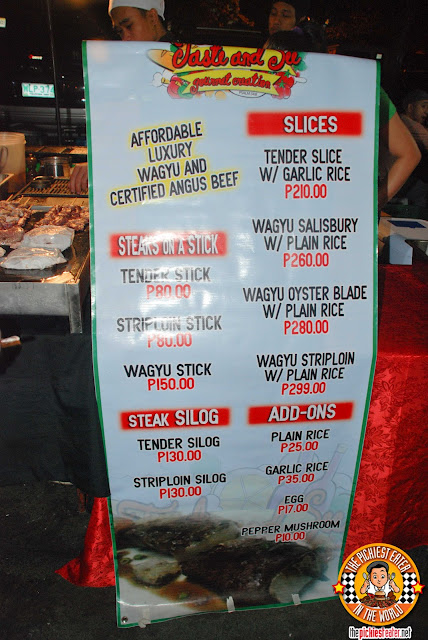 Usually when going to these night markets, I make it a point to get as many of the cheaper meals as I can. I don't get dishes that cost more than P200 bucks. But when I walked past the "Taste & See: Gourmet Creation" and smelled their Wagyu steaks on the grill, I was sold. 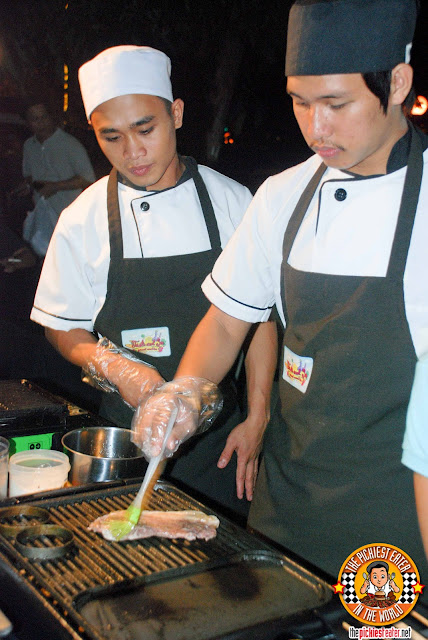 I chose the fattiest piece of Striploin Steak (P299) among the bunch and watched it sizzle in the pan-grill (As always, I requested it to be medium well). The cooks sprinkled a little salt and pepper and basted it in what i'm assuming was some sort of herb-olive oil mix.


The meat was cooked perfectly, and was so tender, it was on par with steaks you get from (lower end) steakhouses. You'd think you'd have a difficult time eating steak with a plastic fork and knife, but even the plastic knife could slice through the meat cleanly with just a couple of strokes. 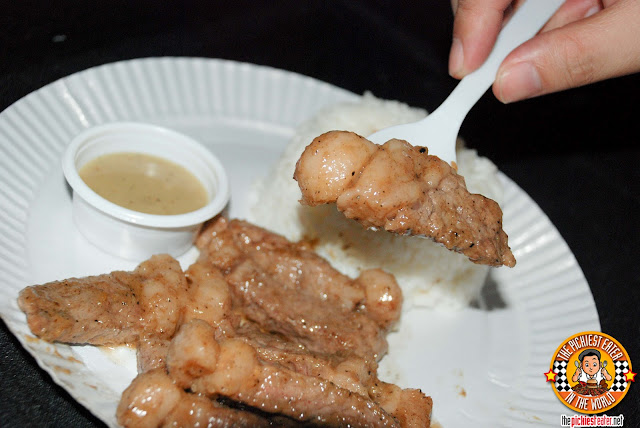 When you eat it with rice, you will have a hard time sorting out which is the meat and which is the actual rice with your tongue. Also, the mushroom sauce that it came with was a delightful companion to the meat, and had the right amount of saltiness to it.

Perhaps my only two notes on this was.. the meat was cooked perfectly but the fat needed a minute or so more, making it chewier than it should have been. And secondly, the "Garlic Rice" I asked for was actually Sanskrit for "Plain Rice with Garlic Bits on Top". If that was the case, I should've just stuck to plain rice.

Nevertheless, the steak was awesome, so I was happy. 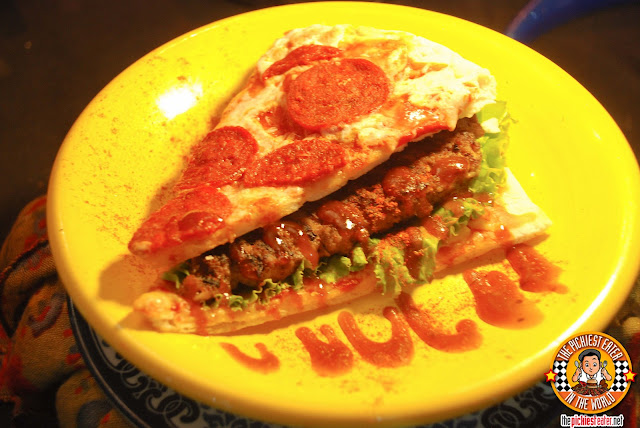 As I was walking along the aisles of Distrito, a lovely young lady walked up to me, and said two of the most magical words that immediately caught my attention... "Pizza, Burger". So I immediately I assumed that her stall was selling both - Pizzas and Burgers. Apparently they weren't.. they were selling PIZZA BURGERS.


I know what you're thinking. All the famous Pizza places in the metro sell a variation of a cheese burger pizza, right? A pizza with crumbled hamburger meat on top? 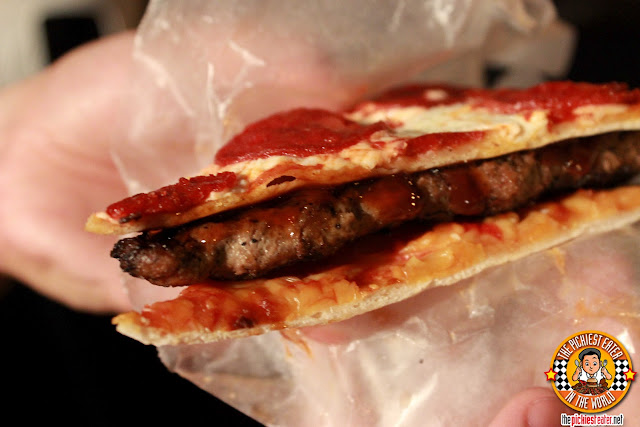 Well, this is different because The Fire Escape (as the stall is known) doesn't sell CheeseBurger Pizza, but a PIZZA FRICKIN' BURGER. Meaning a fried all beef burger patty sandwiched in-between two slices of PEPPERONI PIZZA (They called it "The Rookie" (P100)). To me, this was sheer genius. First off, the pizzas were nice and crunchy, and had generous slices of pepperoni on them. But what I liked more about this, than anything else was how they paid close attention to the burger patty, even shaping it into a pizza slice to make sure it fit just perfectly. But more importantly, the meat actually tasted really good.

My only comment would perhaps have been that the drizzling of BBQ sauce on the patty, though it was a nice touch, was unnecessary, because the flavor clashed with the tomato sauce (but not in a bad way).

A great discovery, and something I wouldn't hesitate going back for again! 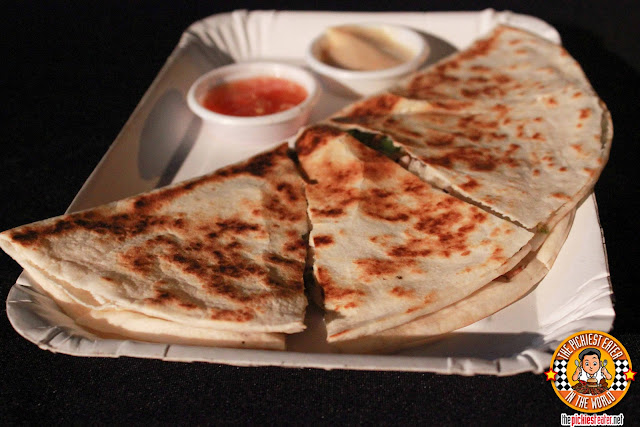 Though I'm not a big fan of mexican food I do like me some Quesadillas. I passed by a stall making Quesadillas and had to make a u-turn when I took a closer look. You see, this may look like your average ordinary Quesadilla on the outside, but I assure you it is not. 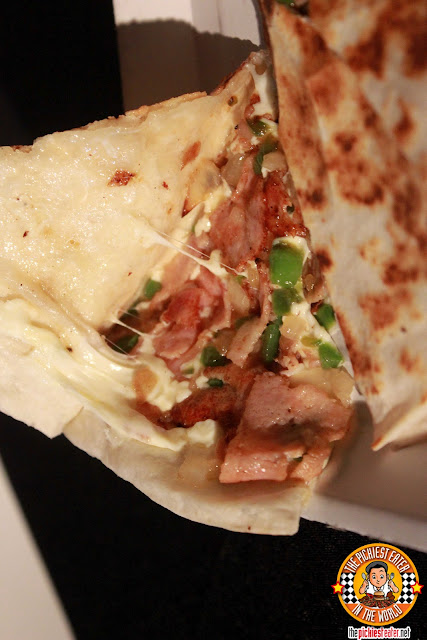 Because a closer look will reveal that the sucker is actually loaded with BACON! A Bacon Quesadilla. Distrito must've been holding a Mensa conference because this was again, another stroke of pure genius. The mix of gooey cheese, smokey bacon and chopped green peppers (Yes, I even ate the peppers.. they ended up tasting like Bacon, that's why) wrapped in a perfectly toasted Quesadilla was yet another great find at Distrito. 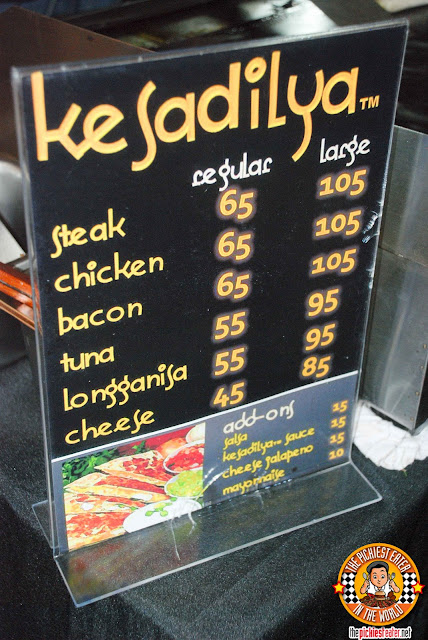 This awesome bacon Quesadilla was brought you by the wonderful people at "Kesadilya". I got my eyes on the Longganisa Quesadilla next. (You can't see it, but I'm doing that pointing at my eyes then at them then back to me ala Robert De Niro in "Meet the Parents". Yes, to a Quesadilla.) 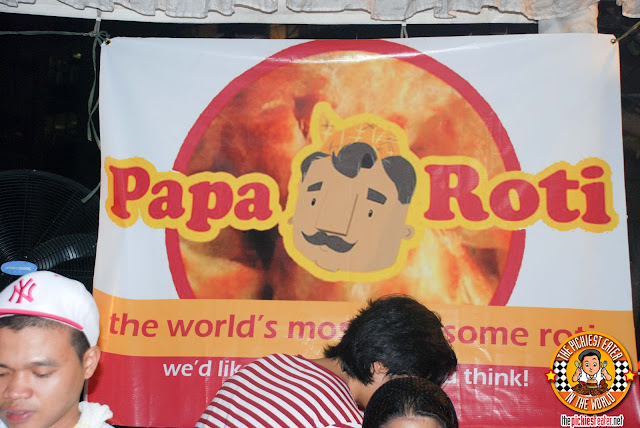 For dessert, Rina and Chaikka stopped by "Papa Roti" for a taste of the first ever Roti Bar in the Philippines. Rina ordered the Chocolate Banana Roti, while Chaikka ordered the Peaches and Cream Cheese (P120) 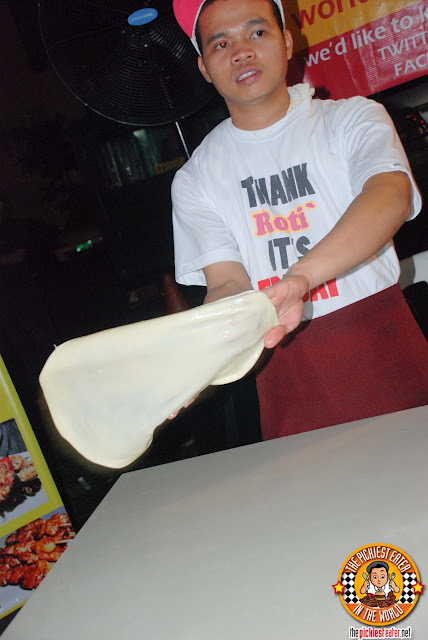 The Roti dude actually makes the roti itself right before your very eyes, so you know it's legit. After a few flings around one hand to another, he flattens it out and prepares it for frying. Roti Dude lays his creation into the pan where it slowly browns and strengthens its consistency. 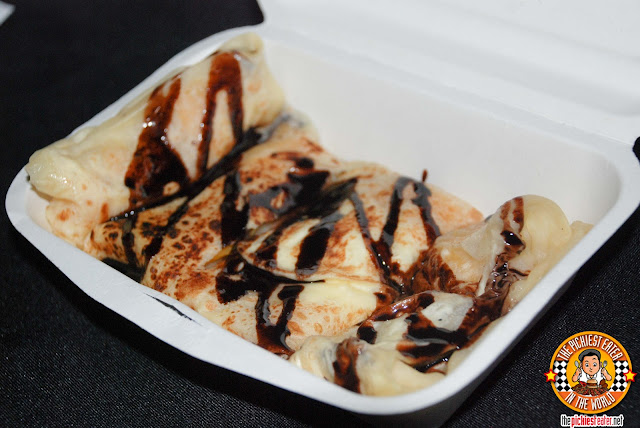 The Roti tasted very similar to a crepe, except a crepe wrapper to me is a bit creamier, and the texture is a little different, with it being a bit flakier. I honestly love Roti in any shape and form, and I enjoyed the Banana and chocolate. But they have other flavors (including a Bacon and egg), that i'm interested in trying.

I'm going to go all out and say it.. Expect me to have a lot more posts on Distrito (I actually have a lot more material). It's a great place to drop by after a long day at work and meet up with some friends who work around the area.


Expect to get smoked on by the grills, if you're staying behind a BBQ Stall, but at the end of the day, that's all just part of the Distrito experience! 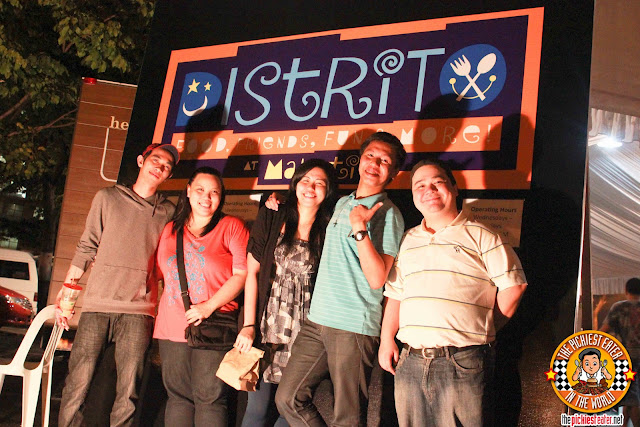 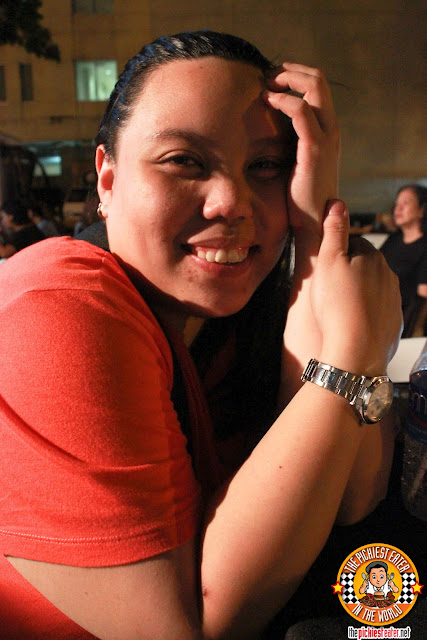 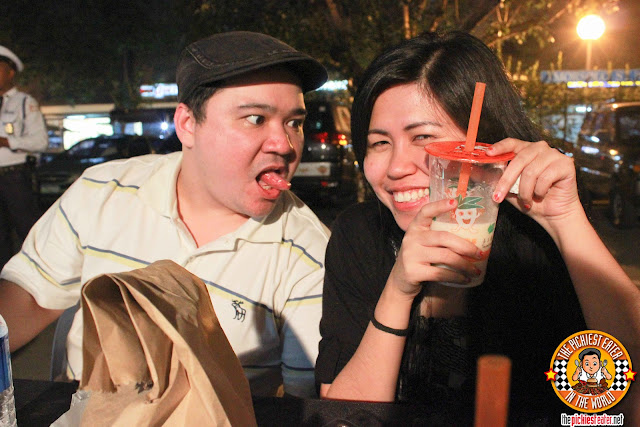 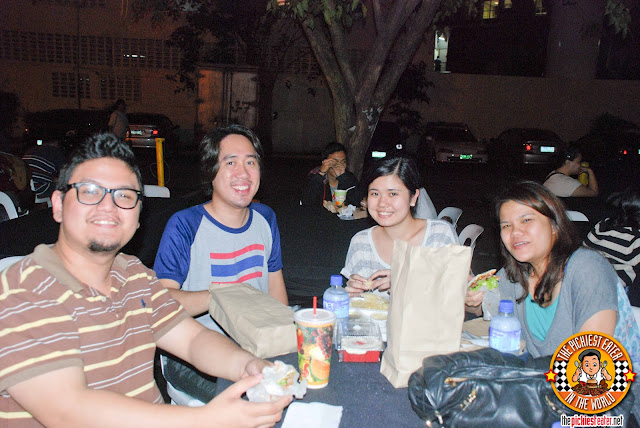 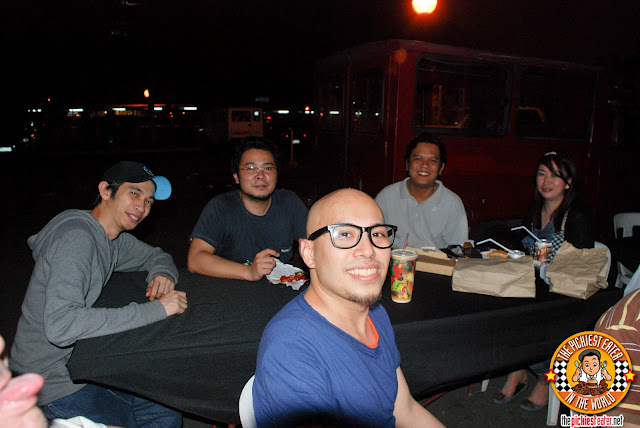 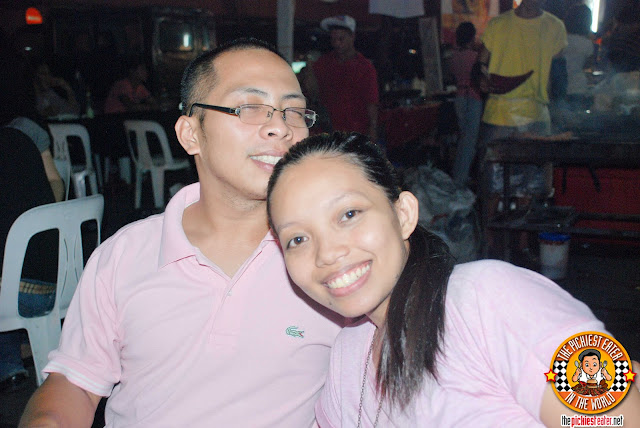 Even Don (eyes closed as always) and Chaikka dropped by!
Posted by The Pickiest Eater at 2:15 PM