In case you're new to my Blog, I just wanted to let you know that as of today (January 30, 2012), The first ever Pickiest Eater In The World Contest Giveaway is underway, and you can find out the details on how to join by clicking out the post HERE. Get a chance to win Gift Certificates for P5,000.00 worth of services from CATHY VALENCIA SKIN AND BODY CENTER! Guys, if you need pogi points with your girls, this could be your chance! (Unless you wanna use it yourself of course.. Umm.. We're not here to judge) So it was Chaikka's (Rina's sister) birthday last Saturday, so she and Rina had planned a family outing at Manila Ocean park, mainly because my Father In Law has a fascination for Marine life. Apart from it being Chaikka's birthday celebration, this day also marked the first time Baby Rain would be going on a Baby's day out, so Rina and I were doubly excited.

Rina and I have agreed that we wouldn't be taking Rain out to public so much while she's an infant, however this was a special case because it was her Ninang's birthday, and since we would ALL be out, Rina wasn't too comfortable with the thought of leaving Rain at home knowing Chaikka wouldn't be nearby in case of any (god forbid) emergencies (Chaikka and my dad in law lives in the same village we do).


Naturally, they asked me where we could eat around that area, and I immediately suggested "Makanmakan: Asian Food Village", which I had been hearing some very good things about. Lucky for me, my in laws were up for it.

In fact, this lunch was extra memorable for me, because It reaffirmed that choosing Rina as my wife, was the best decision I had ever made. Not just just because she's so amazing.. but because her family and I get along so well..

How well? Well let's just put it this way.. I find it hard to believe that I would find another family that would order three types of Pork Spareribs for lunch.

See what I mean? Destiny. 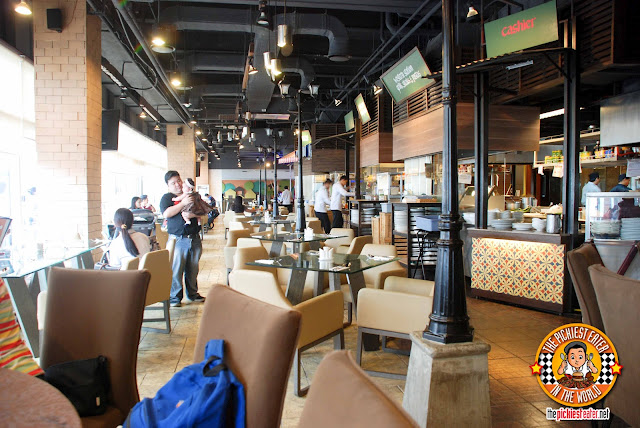 I'm not sure if Makanmakan is the default cafe of H20 Hotel, the hotel built into Manila Ocean Park. But what I did find weird about my visit there was a small issue: The dilapidated menus were very unbecoming of a restaurant situated in a hotel. It was all tattered, and taped together almost like it got ran over by a Mack truck.

Apart from that though, it was hard to find fault in anything else. The place is spacious and beautiful.. Elegant and casual at the same time, and it reminded me a lot of Food Republic, in Singapore. The service was impeccable, most noticeably Captain Waiter Johnathan, who help ensure that our visit to Makanmakan would be a memorable one. 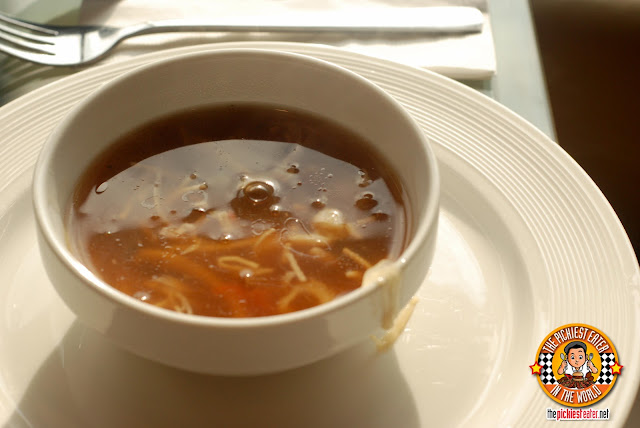 We started off the meal with Makan Makan Supreme Thick Soup (Good for 2-3 P400, good for 4-5 P550), which is filled with bamboo shoots and assorted seafoods. It could have been a result of the 2 1/2 car ride that Don took us on just to get to Manila Ocean park, but my Father in Law really went to town on his bowl, finishing two in a matter of minutes. I tasted it myself, but not really my cup of tea.. or bowl of soup for that matter. So living true to my moniker, after a quick spoonful, I was done. 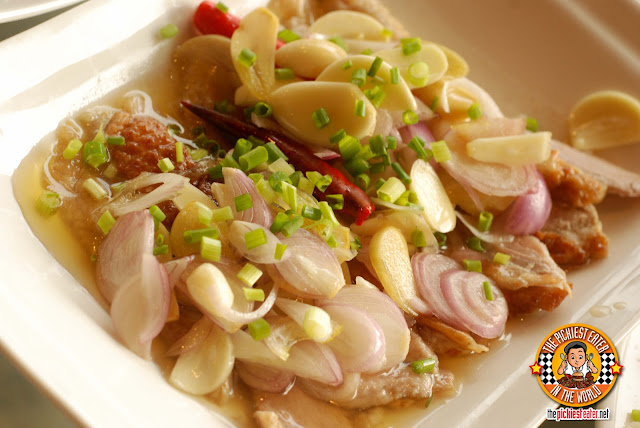 My dad in law also ordered the Roasted Duck Salad (P180). I could smell the strong acid of the vinegar dressing from far away, so I knew I shouldn't taste it for fear of a hyper acidity attack.

The dish had lovely colors and the vegetables they used looked fresh, and the duck seemed to be cooked just right. Again, my dad and law seemed to enjoy it very much. But it was a salad so I took a glance at it and looked the other way (hehe). 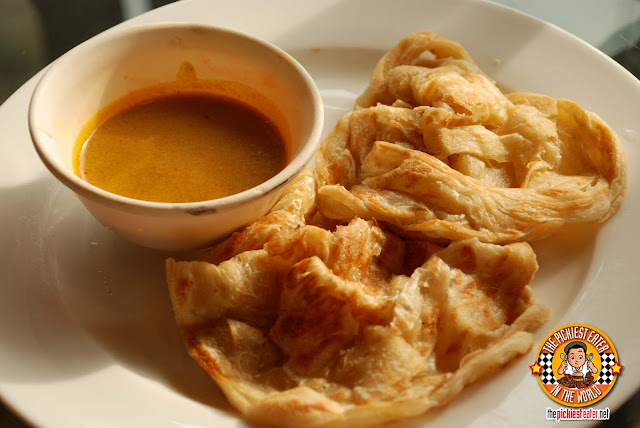 Now THIS is what I was waiting for. I took a small bite into the warm, Roti Prata (P120) and was sold. This was absolutely delicious. It was moist and flaky.. everything I was looking for in an Indian Flat bread. The bread itself was already a wonderful treat, but when dipped into the lightly sweet curry sauce, magical things happened in my mouth.

In my entire life, I can safely say that the best curry I've ever had is the one my mom and my yaya makes. Makanmakan's curry sauce is the closest I've ever tasted to it, so that was a great effort on their part. Chaikka, who supposedly isn't so fond of curry, found herself ordering ANOTHER plate of this FOR DESSERT. 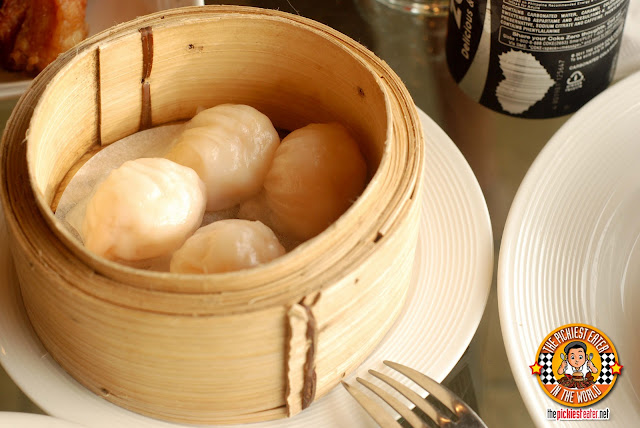 A nice note about Makanmakan is that they have good selection of Dimsum, at very reasonable prices! Their Hakaw (P105 for 4 pieces) featured plump pieces of shrimps wrapped up and steamed to juicy goodness (according to Rina). 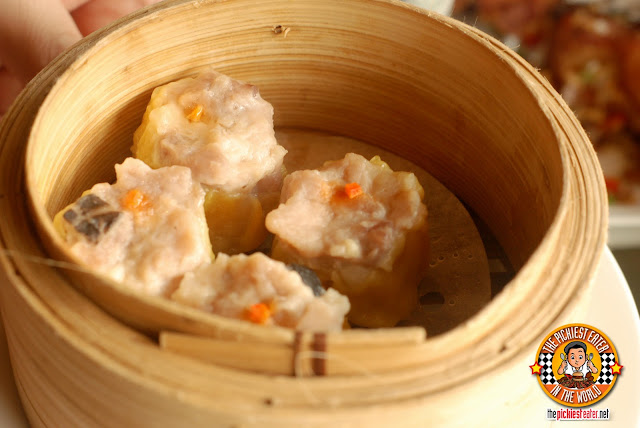 I ordered some steamed Siomai (P95 for 4 pcs), which was pretty good.. but nothing spectacular. Nothing you couldn't get from North Park or the like. Although it did give me something else to dip into the curry sauce when the roti prata was all gone. 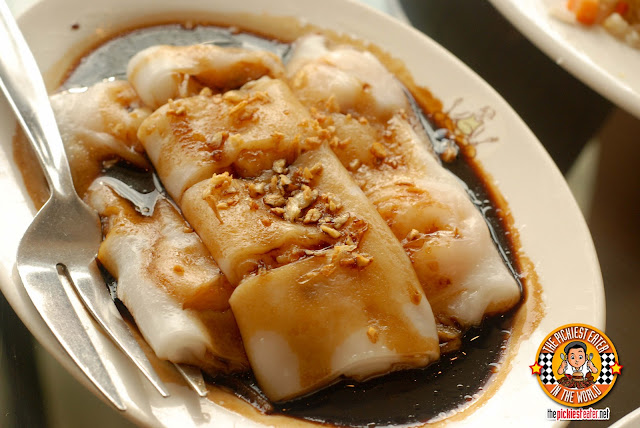 Chaikka ordered the Cheung Fun Shrimp (P120), which was minced shrimp and chinese Chorizo, enveloped in a soft wrapper and steamed. It was also doused in a delicious sweet soy sauce, that made the dish even tastier. Due to my aversion to shrimp, I didn't really try this, but I did get a taste of the sauce and I even ended up mixing some with my rice. 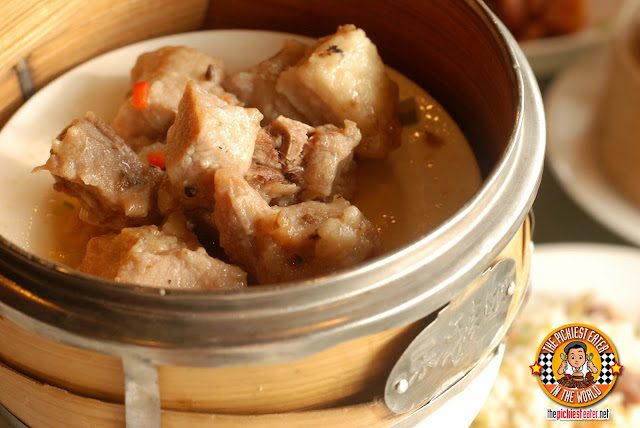 As I've mentioned before, for as long as it is on the menu, Rina WILL order Tausi Spareribs (P95). These were quite tender, and easily ripped off the bone, and had a delicious flavor to it. This would have been appreciated more had we not tried Kanzhu's version a few months earlier, becoming Rina's barometer for Spareribs with Tausi excellence. 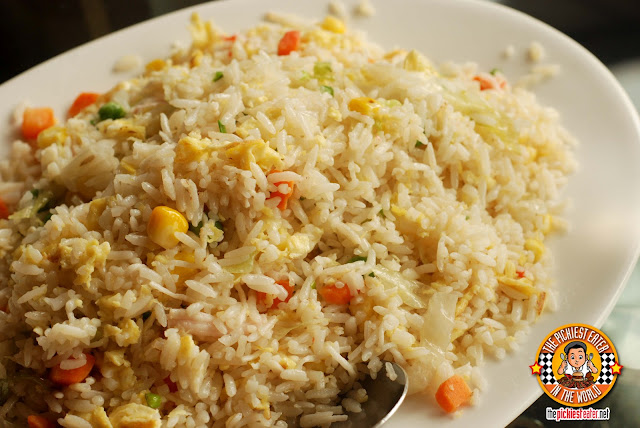 Chaikka wanted the Crabmeat Fried Rice to go with her meal. Since I don't eat crab unless it's in the form of a Crispy wanton from P.F. Chang's, I decided to go with the classic Yang Chow fried rice (Both are P275 good for 2-3, P455 good for 4-5) . It had all the components of a good Yang Chow, but nothing that would set it apart from the different Chinese restaurants across the metro. 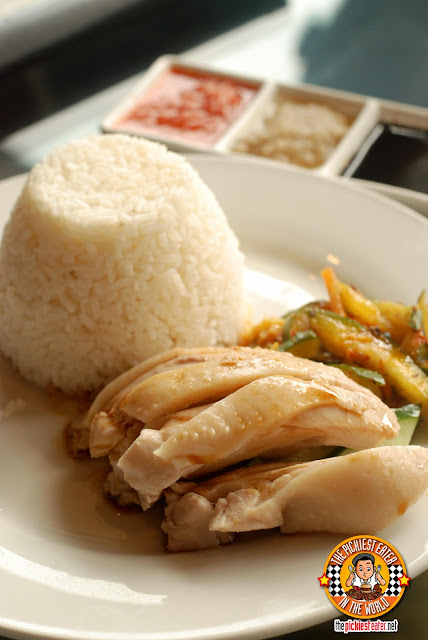 The Hainanese Chicken (Single Plate, P160)could go head to head with Wee Nam Kee, and only loses out in the battle of Chicken Rice. The chicken itself was cooked to a delicate white color, and had a subtle yet delicious flavor chicken that was enhanced by the ginger sauce. (I stayed away from the Chili). 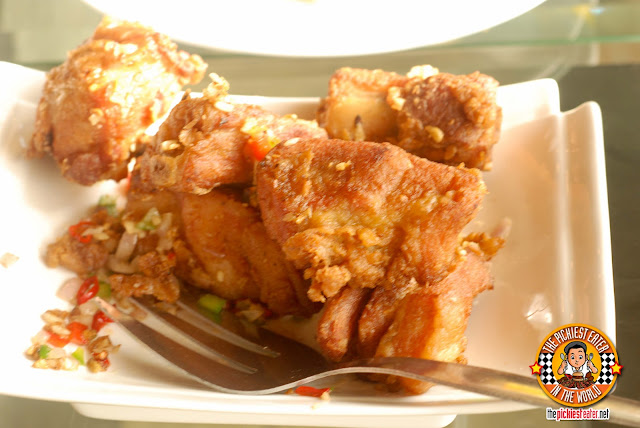 The birthday Girl is a big fan of Salt and Pepper Spare Ribs (P350), so she didn't hesitate upon seeing Makanmakan had their own version. It was fried perfectly so that it was crunchy on the exterior, but immaculately white on the inside, with the juices evident when pierced through with a spoon. The peppers gave the dish a tinge of spiciness, but not enough to get even the weakest of tongues running for water. It came with a chili vinegar dip that I stayed away from, and instead, used to curry sauce from time to time hehe.. 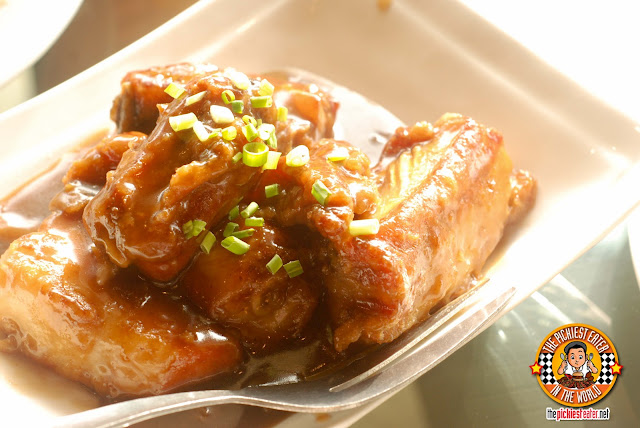 Apart from the Roti Prata, the other dish I requested for was the Fried Coffee Spareribs (Good for 2-3 P390, 4-5 P630) . This was a masterstroke on my part because even Rina, who isn't a huge fan of sweet dishes, thoroughly enjoyed it as well!

The ribs were amazingly tender, and I had no problems slicing through it with the edge of my spoon. The coffee sauce had a delightful sweet, yet smokey taste to it that just seemed to work. 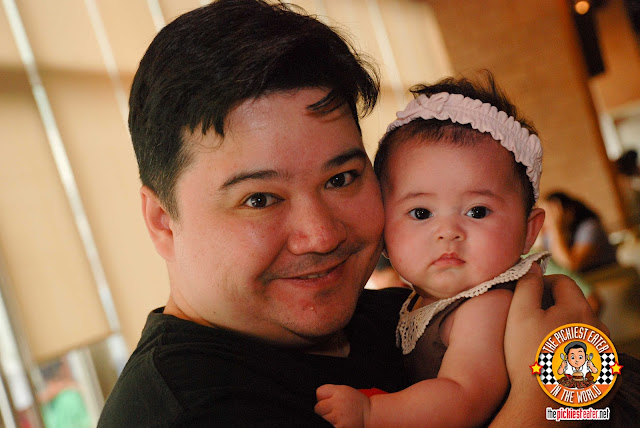 I would have no problems going back to Makanmakan, and perhaps the next time, choose more diverse entrees, however I would definitely order the Roti Prata again, and would recommend the Fried Coffee Spareribs.

As funny as it sounds, this was pretty much the highlight of my day, because I wasn't really impressed with Manila Ocean Park (But that's a whole different story). Don't get me wrong, the wonders of the marine animals were truly a sight to behold but.. I wasn't really too pleased with the crowd, and apart from that, I'm still on the fence whether parks like this is actually a good idea.

Call me old fashioned but I'm a firm believer that all animals belong in their natural habitat, but that's just me. :) 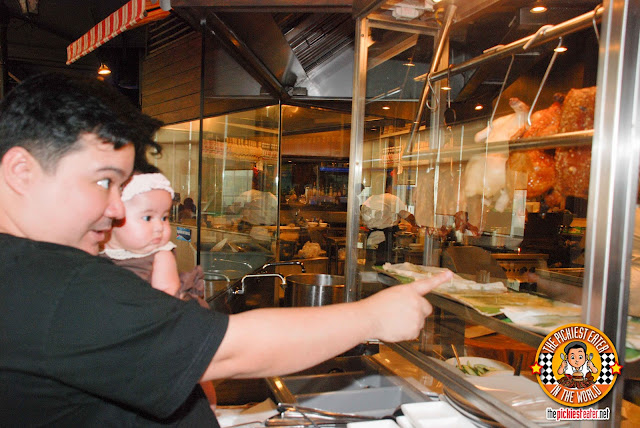 "Over Here we have soy chicken.. and here, pork asado..."
Rina wasn't too pleased to hear me teaching Baby Rain
about the different meats at such a young age.. 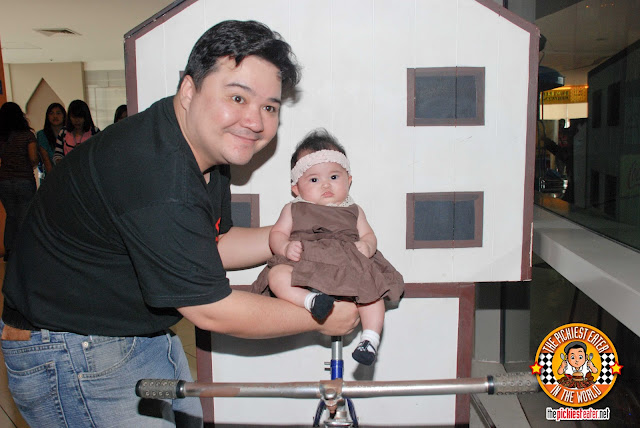 Even the thought of riding a bike didn't faze her. 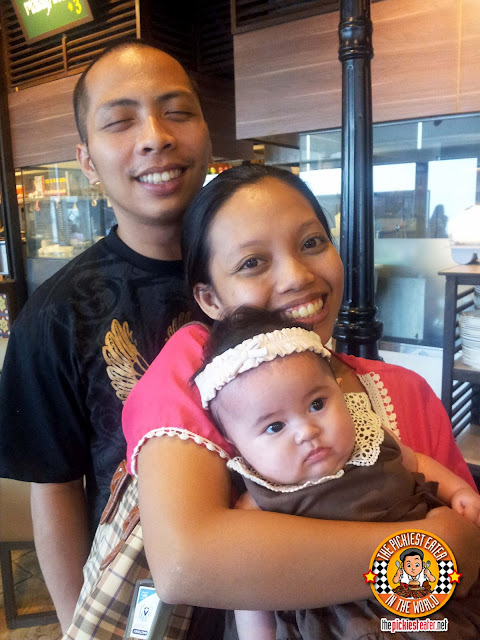 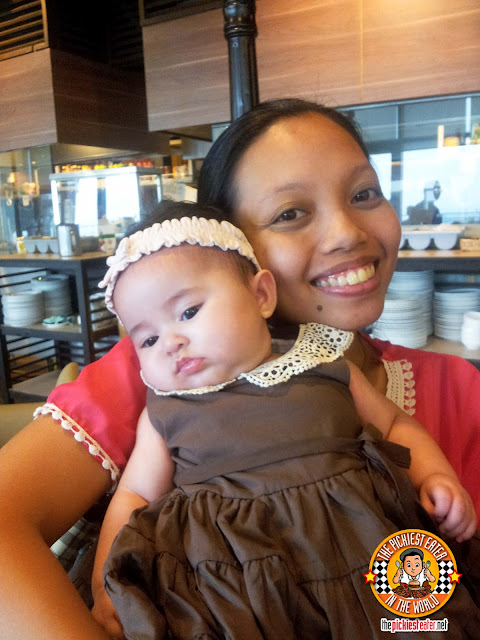 Posted by The Pickiest Eater at 11:49 AM