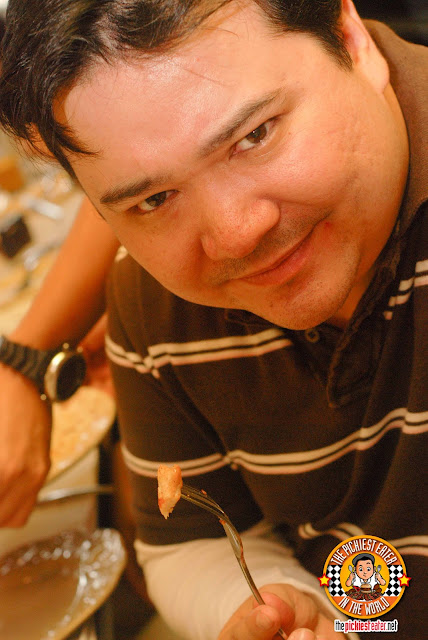 What devious plan am I concocting with this piece of Crocodile Meat?

During my years as a resident of Makati, Rina and I made a trip to Greenbelt a weekly tradition. Admittedly, Restaurante Pia y Damaso was a restaurant that wasn't quick to catch my attention, because I thought it was a Spanish Restaurant. As I've mentioned in the past, I have a high standard for that Spanish food, because my mother's side of the family is extremely adept at coming up with restaurant quality dishes from Spain.

In a classic case of my calculus teacher being totally right about my attention span, had I read their signages further, I would have seen that their tagline is "Subversive Filipino Cuisine". 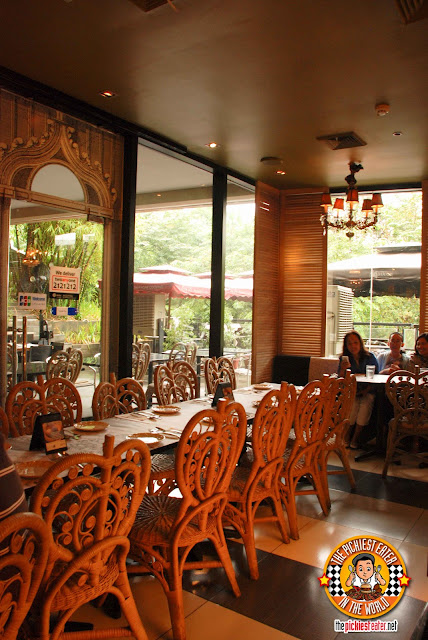 The interiors of the place made me feel more like was walking into a well kept ancestral home. The walls are adorned with old Spanish style decors and antique looking furniture, while the glass surrounding the area does a wonderful job of bringing the sunlight in, giving the restaurant a delightful ambiance that you can relax in. 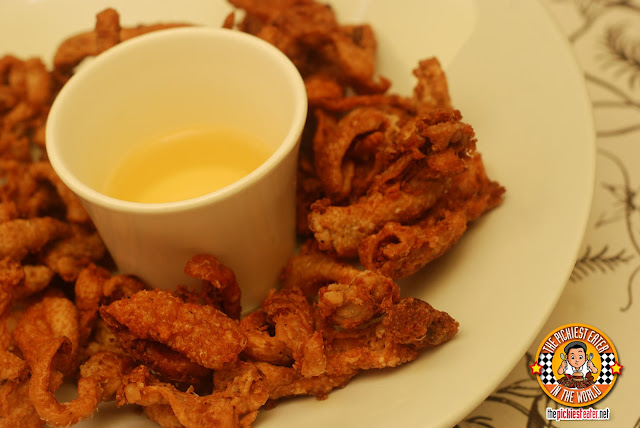 We kicked off the meals with Crispy Adobo Chicken Skin and Tails (P160). Thought it is made of chicken skin and tails, the more appropriate name for this dish would be "crack". The skin was deep fried to golden brown perfection, and had a subtle hint of salty adobo flavor that made this so addicting. If I didn't know that I'd be missing out on some other amazing dishes, I could've asked for a side order of rice and just had this for lunch. 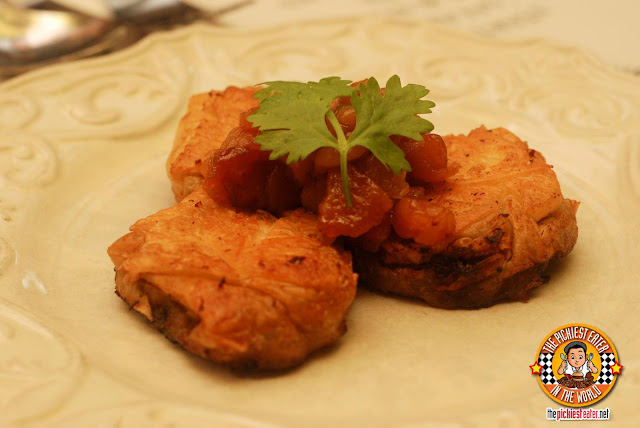 Another dish that I couldn't get enough of, was the Filo Tarts with Pork Asado Apple Relish (P220). The pastry itself was amazing, with the with the exterior baked to a gorgeous golden hue, and served as the perfect casing to the delicious asado. The topping of apple relish gave the dish a nice balance, because it provided a tinge of acid with a touch of sweetness. 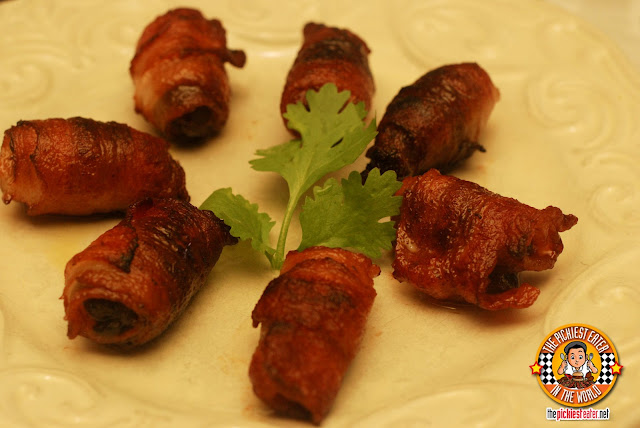 Just when I thought I couldn't love Pia y Damaso any more than I already did (after only two dishes at that!), they brought out the Almond Stuffed Dates wrapped in Bacon (P175). The stuffed dates let out a delicious snap, revealing a sweet, fruity goodness, wrapped in the savory beauty of the bacon. 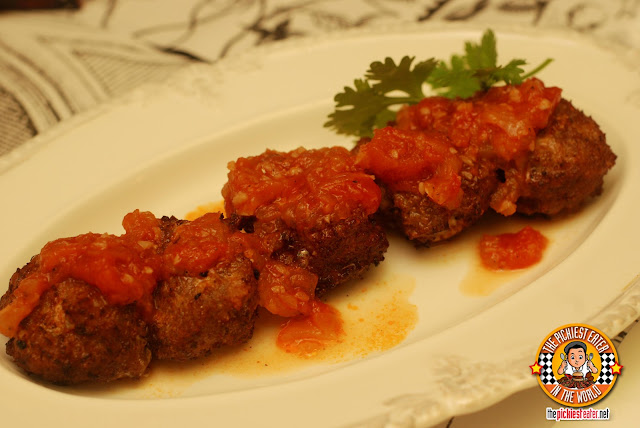 Among the starters, it was the Almondigas (P160) that impressed me the least. It was actually good, no doubt, but It wasn't really anything standout for me, unlike the first three. The meatballs had a yummy meatiness, and the blended herbs and spices were apparent in the flavor. Unfortunately, I had to stay away from the tomato topping. 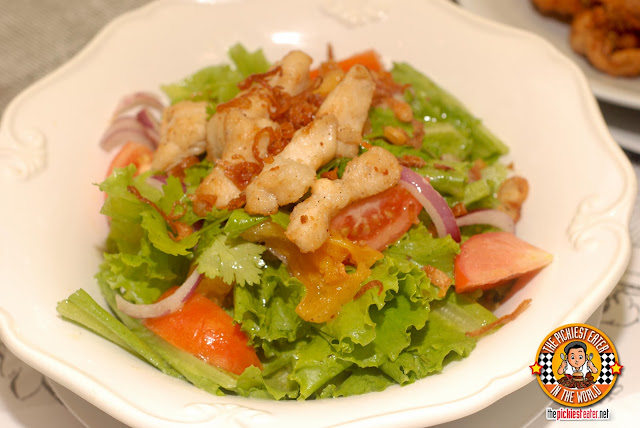 The Elias (P450), was placed in front of us, and we were told that the meat on top was seared crocodile meat. I had a weird look on my face I as stared at it for a second. One of the bloggers I was with noticed, and said with a  laugh, "That's how you react to crocodile meat?" I said, "No, that's how I react to a salad."

The Elis is a mixed green salad, topped off with seared crocodile meat, and mango cilantro vinaigrette. As a picky eater, you can imagine my hesitation in eating crocodile meat, so I wanted Rina to try it first.

Though she's not a picky eater, it seemed Crocodile meat was where she drew the line. So I had to think of a way to get her to try it. So I turned to her and pretended to be chewing and said, "Wow you should try this crocodile meat! It tastes exactly like chicken!". Based on my testimonial, she sliced off a piece, and cautiously placed the meat in her mouth and chewed. At that precise moment, I stopped chewing and said, "So what does it taste like??"

In case I've never mentioned it before, my wife has a mean right hook. 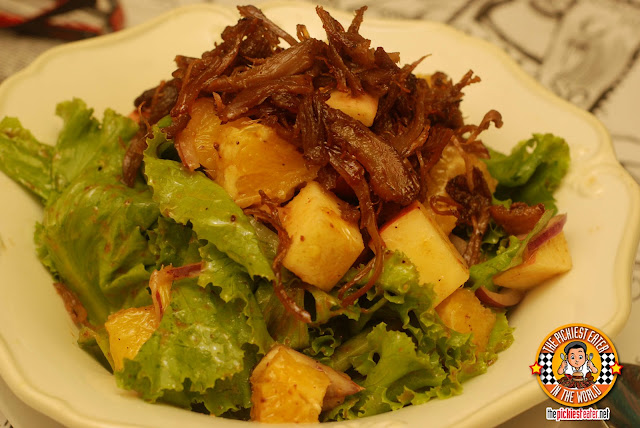 The other salad they had were the Mixed Greens with Duck Confit, Red Onions, Apples and Oranges in Champoy and Prune Vinaigrette (P350). As you know by now, I don't eat salad, so.. I don't have much to say about the last two dishes.. Except they had a lot of green stuff which I am told is called "Lettuce".

The common consensus among the bloggers I was with was that they were both excellent. 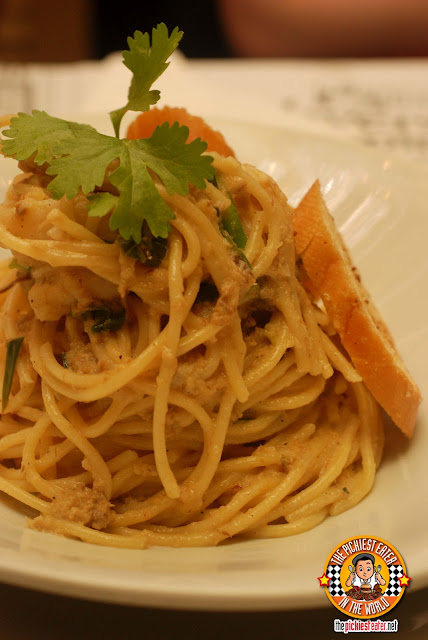 Next they served the Creamy Tinapa Asparagus and Fish Fillet (P300). Though I prefer meat over fish when it comes to pasta (and in general) this was actually quite good. The smokiness of the fish made sweet music with the creaminess of the sauce, making it a well balanced pasta dish. 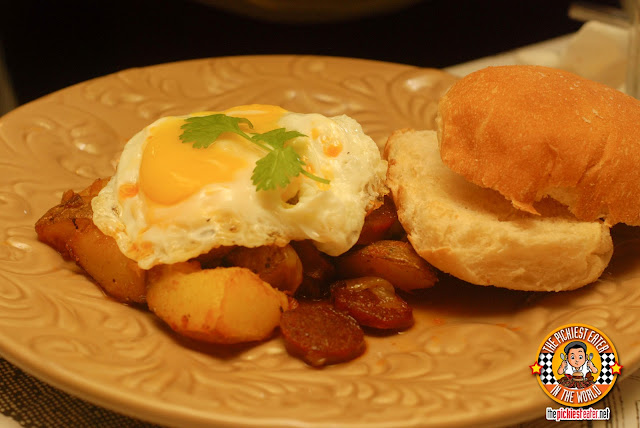 The Fried Chorizo, Potatoes, Egg and Pan De Sal (P475) is exactly something that I would look for come Merienda time. The Pan De Sal bread was toasted just right, so that the inside had a light layer of crunch to it, without losing the softness. The fried egg was cooked perfectly, with the yolk still wet. The potatoes were also cooked to my liking, as it was soft enough to bite through with no resistance yet not mushy. The Chorizo was amazing. It had a wonderful blend of spices, and a certain tanginess to that my tongue kept looking for.

Perhaps my only qualm with this dish is the price. I can't imagine shelling out almost P500 bucks for a Pan De Sal dish. 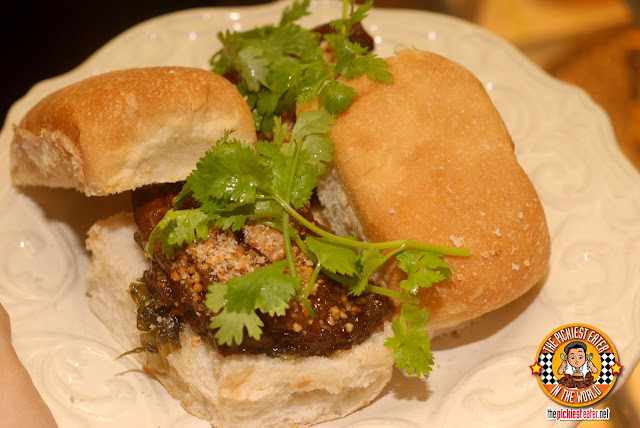 As a lover of sweet meat, I can say I thoroughly enjoyed the Kua Pao Pan De Sal (P250). The braised pork belly was fragrant, as it was bathed in a rich sauce, and topped with Peanuts and Sweet mustard leaf and Cilantro. This is something I see myself making a triple decker of. hehe. 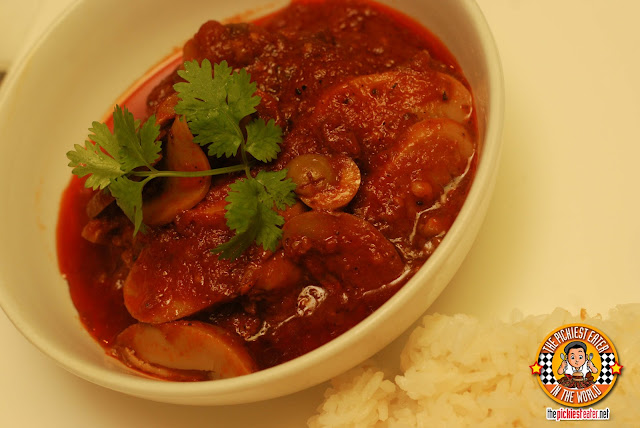 Based on the mere sight of the tomato sauce, I knew I wouldn't be able to handle the Callos (P300). Which worked find for Rina because it meant more for her. The beautiful aroma of it, however was undeniable. The callos was a mix of Ox Tripe, Pork Hock, and Beef Shank, stewed together with Bacon, Chorizo De Bilbao, paprika and garbanzos and Bacon.

I know I already said Bacon, but it was worth saying again. 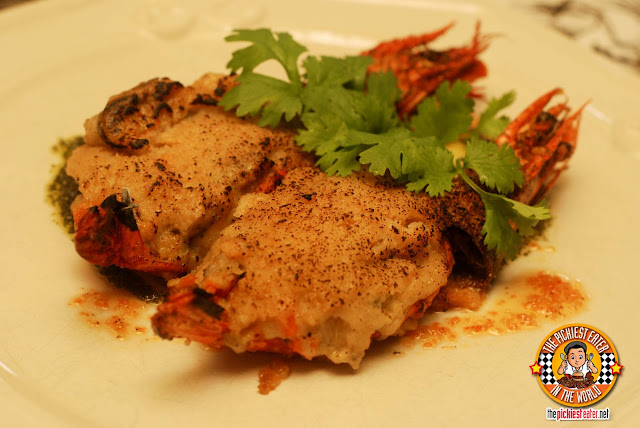 Being the seafood lover that she is, Rina loved the Camaron Cusido (P380). Considering how she always complains about how she never gets to order shrimps or prawns whenever we go on food trips, I think this seared prawn and seafood thermidor, that was filled with almost every marine life you can imagine (Scallops, fish, mussels, and squid), I think I won't be hearing her complain about that for awhile. The seafood was mixed in with potato, cheese and sourdough crumbs, and magical things happened. 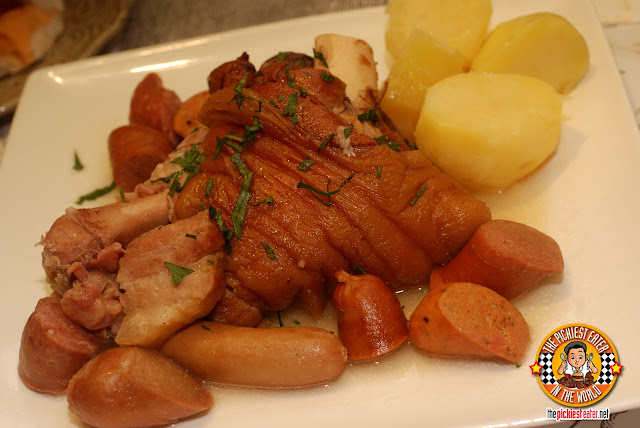 If my visit to Restorante Pia Y Damaso was a Filipino Movie Awards Show, the "Ode to Heidelberg" would have won the award for "Star Of The Night" (Sorry Vice Ganda). Curiously, this wasn't a Filipino dish, but German. It was a boiled pork hock, served with four different types of sausages, bacon and potatoes. It had simple flavors, yet absolutely stunning. The bacon, which seemed more like a slab than a slice, was made of pure love. The pork tore right off the bone to reveal meat so tender and juicy, Purefoods Hotdogs are so ashamed of themselves, they're planning to change their name as we speak. 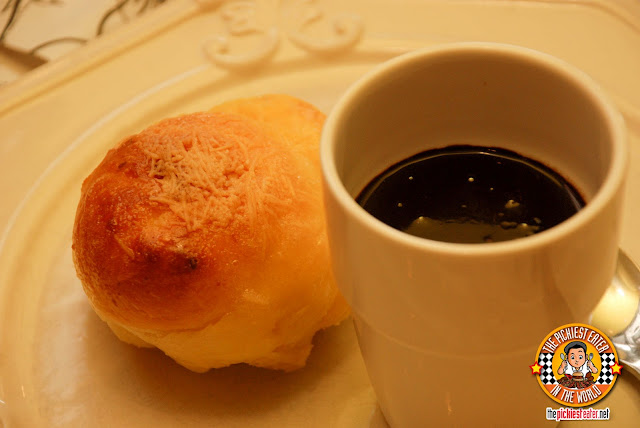 Dessert started off with Tsokolate Eh and Toasted Ensaimada Quezo De Bola (P150). This was a soft, Ensaymada with Quezo de Bola Cheese shavings, and toasted to give the exterior a light crunch. The chocolate was made with Davao Tablea Cacao and Malagos Goat milk. I was expecting it to be extremely bitter, but I was pleasantly surprised to discover it was not. I was so tempted to drink the hot chocolate alone.. but I felt guilty.. Until... 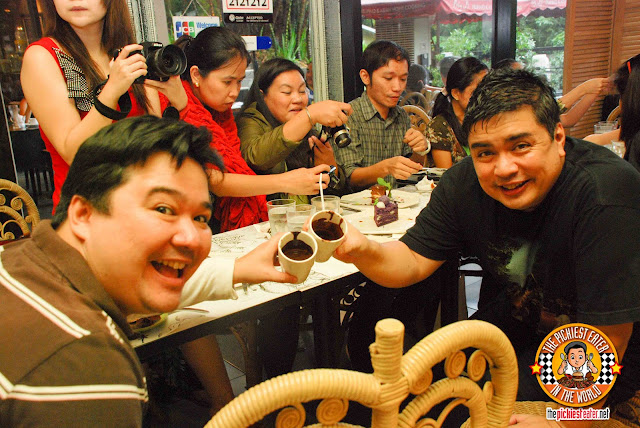 Spanky Enriquez proved to be a bad influence on me once again! While the other bloggers were busy snapping pix of other menu items, Spanky grabbed the two cups of Tsokolate eh, handed one to me, then we did a little toasted and he said, "Bottoms up"!!

We weren't even sorry. 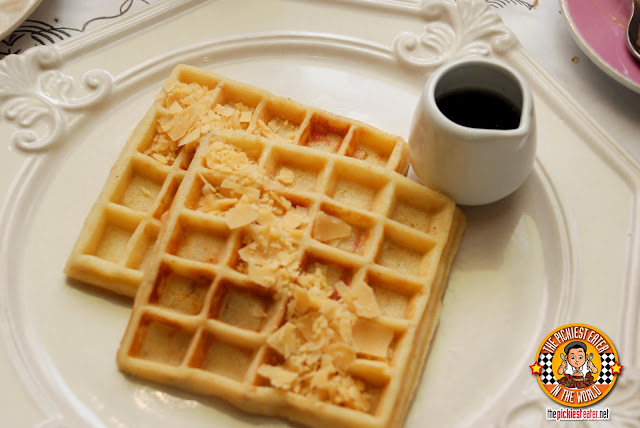 I'm honestly not a big fan of Bibingka, but then again, I had never tried it in a waffle form before. I thought the Bibingka Waffle (P150) was a stroke of pure genius. The texture was true to the native bibingka, and the sharpness of the shaved Quezo De Bola mixed with the salted egg and goat cheese went perfectly with the sweetness of the coco jam that substituted the maple syrup. 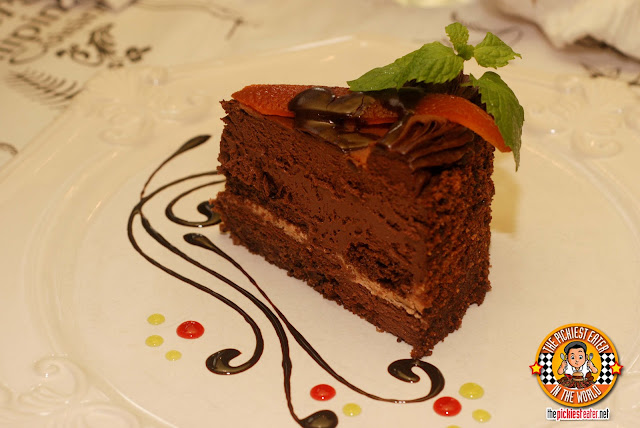 Because of its Dark chocolate taste, Rina couldn't help but go crazy over Sisa's Dementia (P175). The white chocolate almond pastille ensure that the truffle cake wouldn't become too bitter, as it already had Dark Chocolate Mousse and ganache. Till this very day, Rina still has dreams about this cake. 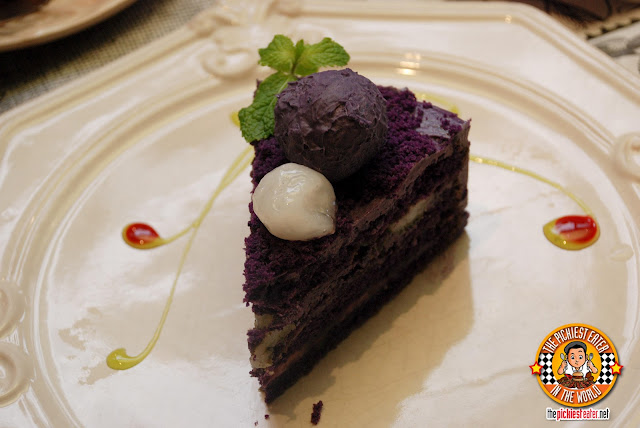 I wasn't expecting to enjoy the Ube Macapuno cake as much as I did, but I honestly couldn't get enough of it. I don't usually eat macapuno (sorry, picky eater), but I just kept digging into this cake like there was no tomorrow.  My favorite part was the Mousseline cream, which added a wonderful dimension of creamy, almost sweet butteriness to the cake. 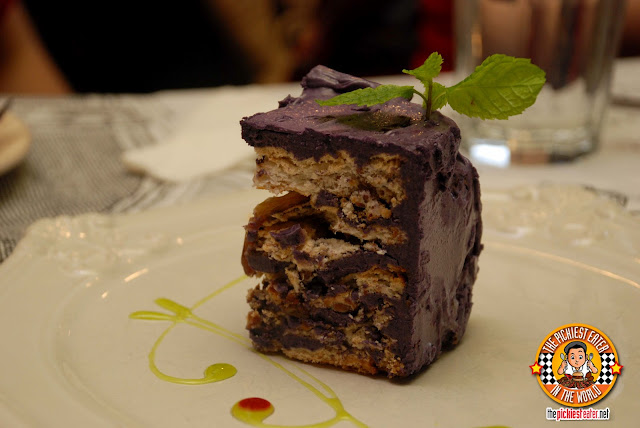 The Ube Macapuno's second cousin twice removed (what does that mean anyway?) is the Ube Sansrival. I loved how every layer had a tinge of creaminess to go with the flavorof the ube, and the pastry still had a small crunch to it. I'm a huge fan of Sansrival, and this is something I would definitely go back for. 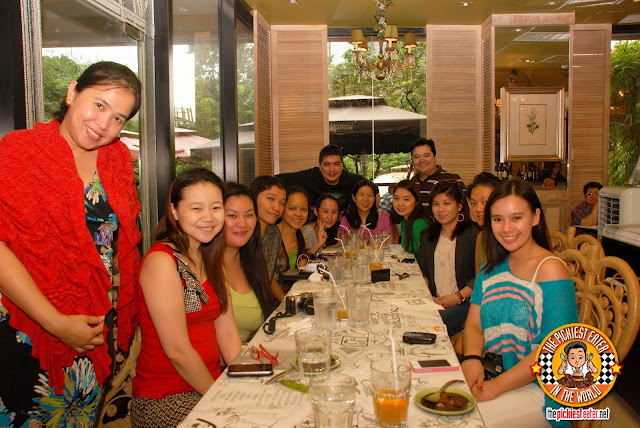 I gotta hand it to Chef Bambi Sy Gobio.. She really prepared an amazing feast that left me wishing I went to Pia Y Damaso more often when I lived just walking distance from it! I had a wonderful time at Restorant Pia Y Damaso with my other blogger friends, and I can't wait to go back. There are still so many things in the menu that I need to try, especially the Rib Eye in Olive Oil! 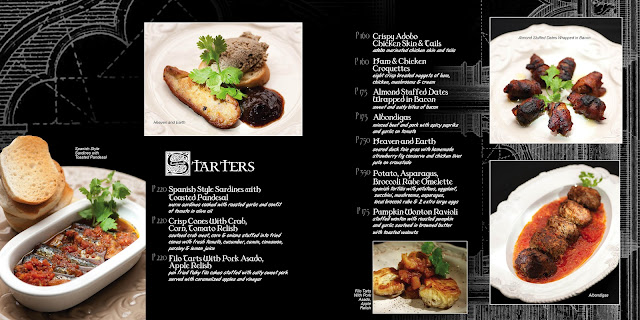 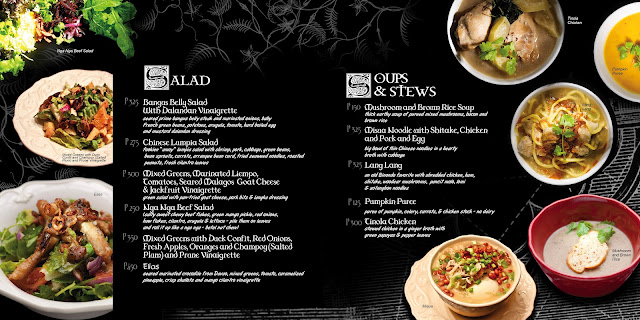 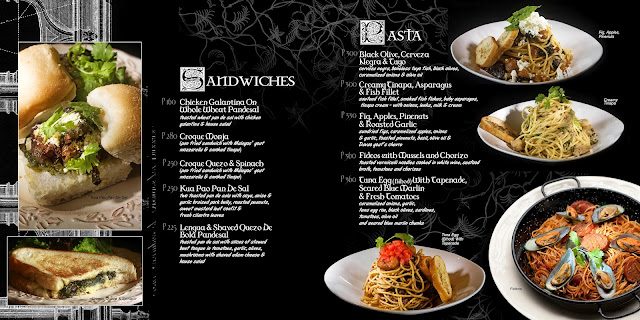 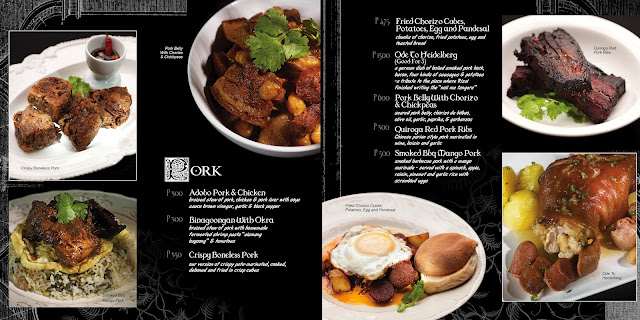 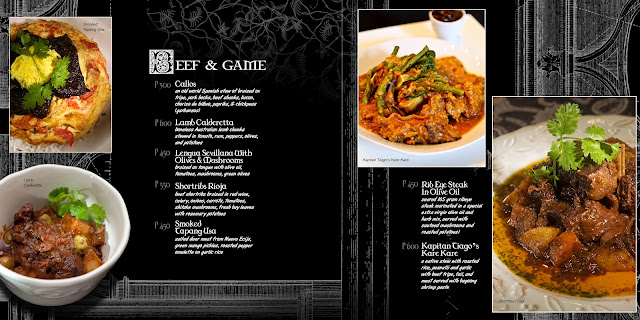 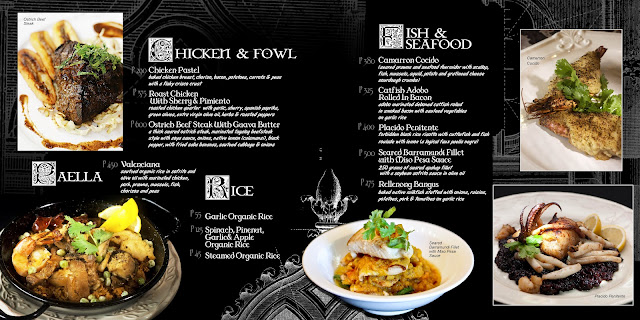 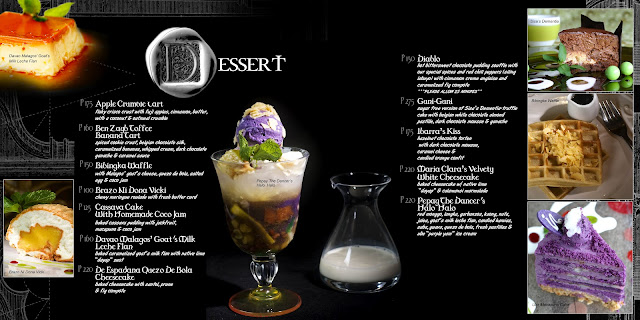 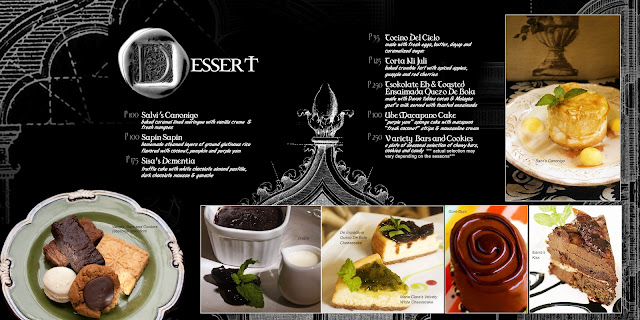 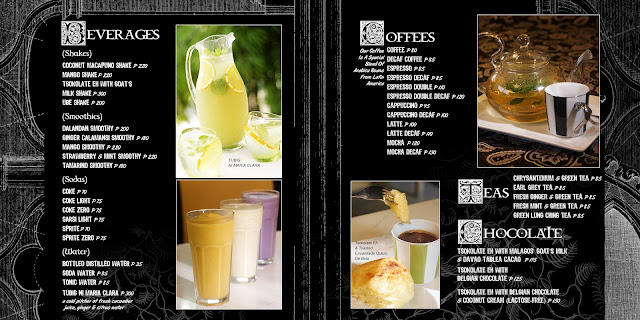 Posted by The Pickiest Eater at 11:55 PM