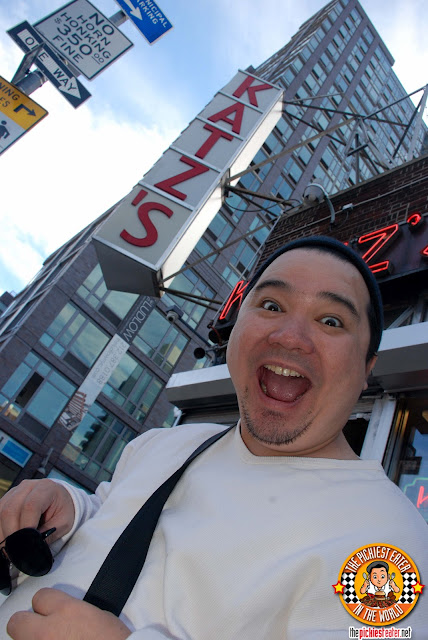 Even before the winner of the Oreo AmbassadOREO was announced, I had told fellow blogger Spanky Enriquez about the Blogger AmbassadOREO contest. I told him that If I were to win, I would be in New York by September 17. Funnily enough, the date coincided with HIS trip to.. you guess it.. New York!

Just before I announced that I'd be leaving for the Big Apple, I had a blogger event at The Cake Club with the Spankster, and I discreetly told him that I had indeed won, and would be heading to New York. The first thing he excitedly said was "So where are we eating!?"

During the course of the event we were discussing places where we had wanted to go, and on the top of both our lists was Katz's. 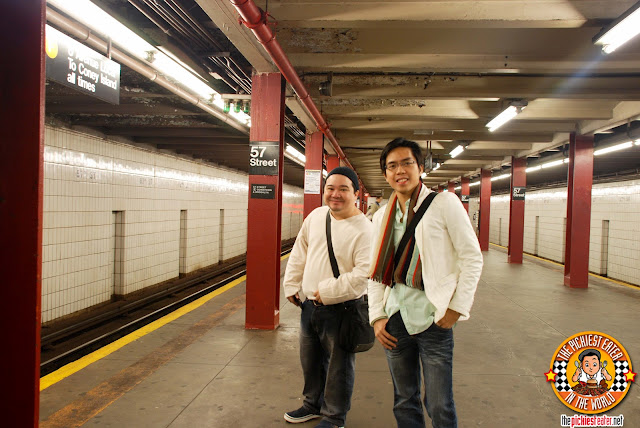 When I got stateside, I got in touch with Spanky via Facebook, and his cousin Ana, a resident of New York, taught me how to get to Katz's via commute. So me, Rina and Oreo Brand Manager Nano, decided to go on our first New York Subway experience.

We managed to survive, and not counting the lady sitting beside me who was dancing rather emphatically to the beats pounding in her earphones, seemingly unaware that no one else could hear the music, the trip went without incident. 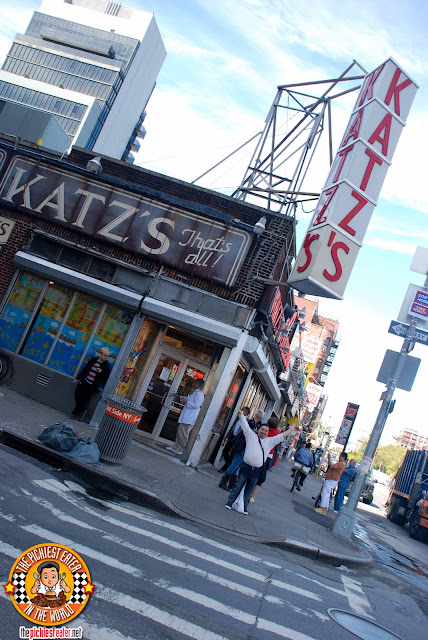 After the Subway Ride and short walk along East Houston Street, We finally arrived at Katz's Deli. I saw the sign from two blocks away, and it was almost like staring at the sun. It was a surreal moment for me. Rina said that based on the look of my face, she imaged that's exactly how she must have looked when she saw the Disneyland Castle for the first time.

Though Katz's had been a New York Icon since 1888, it wasn't until 1989 that the deli received attention on a global scale. All because of THIS scene.. which happens to be one of the funniest moments in the history of modern cinema. 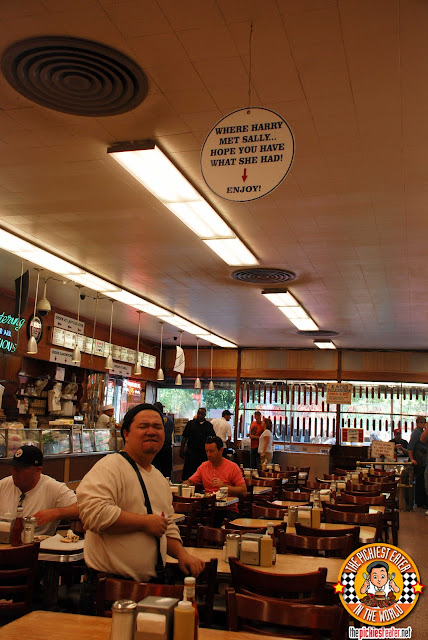 It seems my "Foodgasm Face" is nowhere near as sexy
as Meg Ryan's "Orgasm Face". 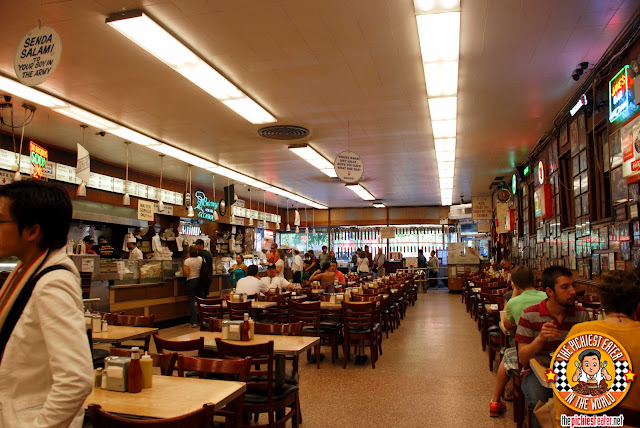 I can't imagine the interiors changing much throughout its existence. With its wooden paneling and picture frames across the wall, Katz's has got a full on 1980's vibe. All of this adds to the mystique of it being a Class New York Delicatessen. 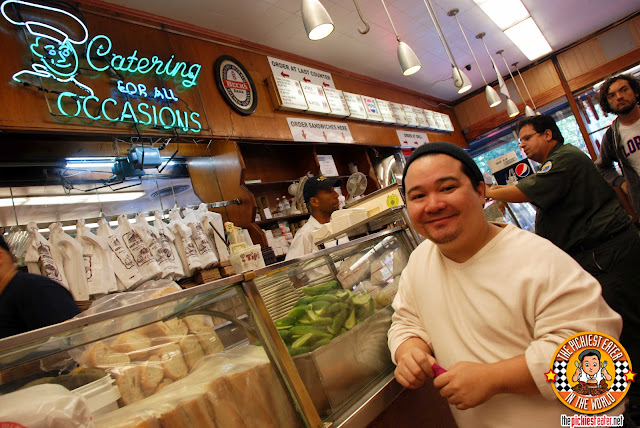 For Katz's Deli Newbies such as myself, ordering food was a little bit confusing. When you enter the deli, you are given a ticket that you MUST keep with you at all times. There's one long counter, with several lines in it. If you look up, you see signs pointing left, right, and down. At first, I couldn't make out where one line ended and the other began. It was only until the guy behind the counter finally yelled out, "Find an available carver!" did I figure out the system.

You find a carver behind a counter, then follow that line. Hand him over your ticket, he'll write down your order, and after your meal, you present it to the cashier before heading back out. Sandwiches are carved and assembled right before your very eyes. The guys behind the counter don't exactly look like they have the most gentle of hands, but you'd be surprised how they wield a knife and slice the meats with the lightest of touch.

To this very day, I deeply regret not buying the hat my carver was wearing. 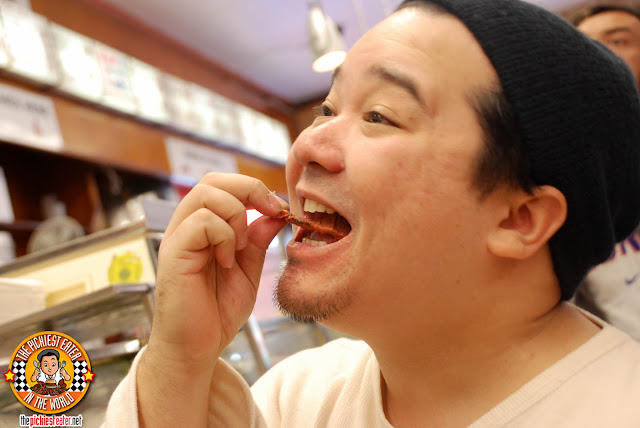 When you tell them your order, they slice a small piece of meat for you unto a plate for you to sample what you're about to get. A little teaser of what's to come. 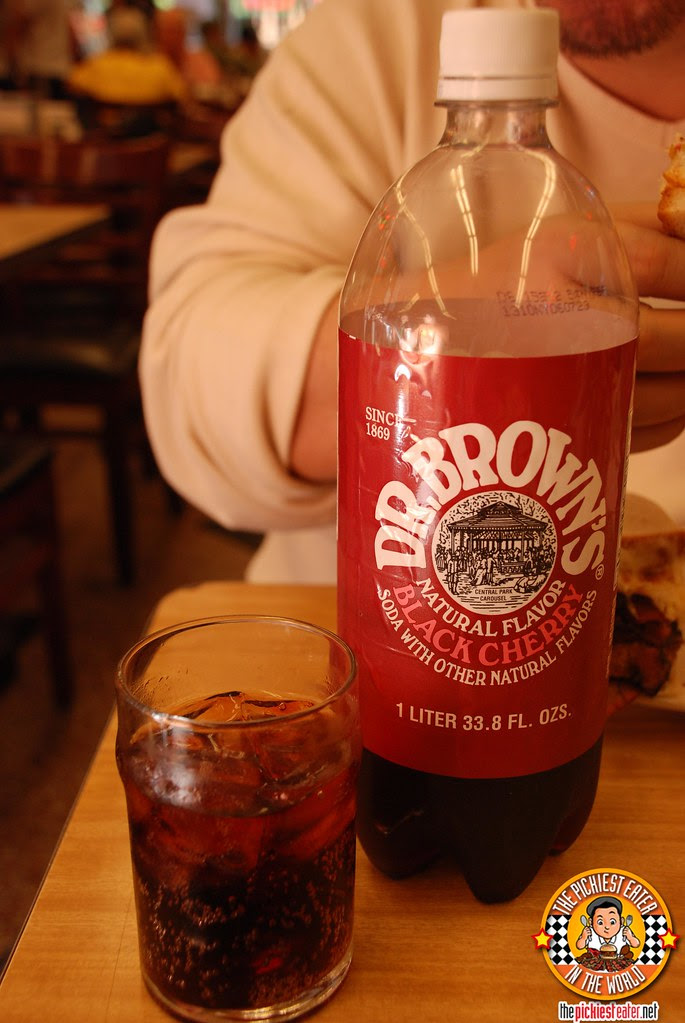 Something I've come to learn ever since I've met Spanky, is to trust his taste in food (He's my brother-in-bacon, so hell yeah!). After I brought our sandwiches to our table, he told me that I had to try Dr. Brown's Black Cherry Cola. Like an obedient Padawan following the orders of his Jedi Master, I went back to the counter to order a liter for myself, Rina and Nano.

It took one small sip for me to declare this one of.. if not my favorite Soda! I've had Cherry Coke before, and I found it a bit too sweet, with a slightly medicinal flavor. This had the cherry flavor that was slightly similar to Cherry coke, but done right. The awesomeness is hard to put into words, but remember the name.. Dr. Brown's Black Cherry Cola. 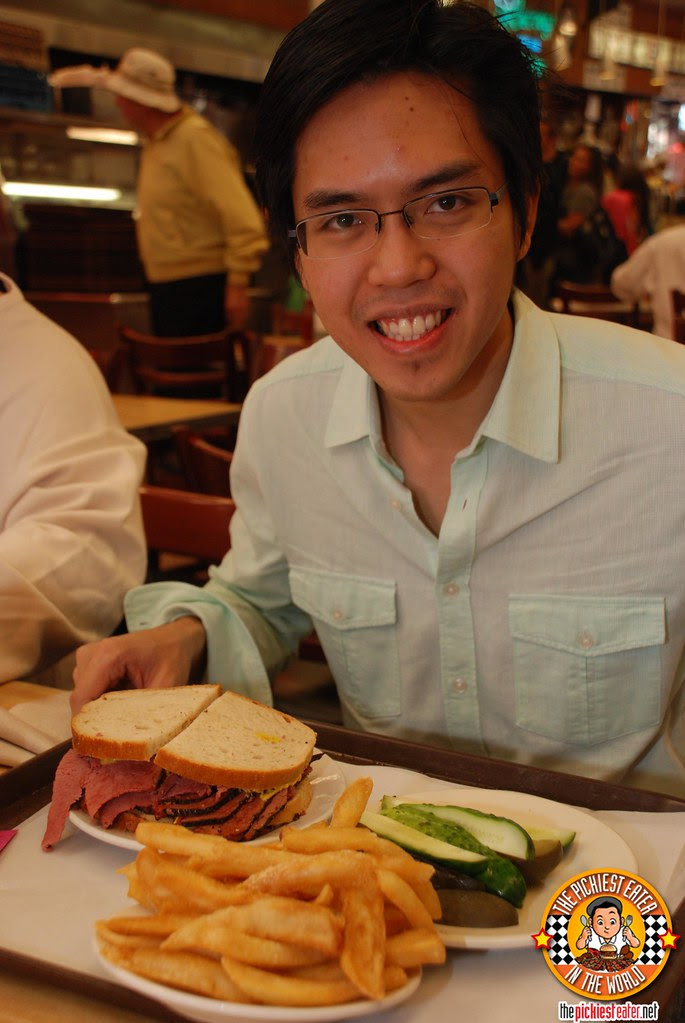 Nano decided to order a side of Steak Fries (US$4.95) with his sandwich. I chose not to because, as I've mentioned before, I'm not too fond of thick cut French Fries. Unfortunately for me, that was a huge mistake, because the fries, despite being thick cut, had an amazing crispiness to it, and was salted just right. This was the perfect companion to the Sandwich.. Thankfully, Nano was kind enough to let me swipe from his plate (And even before he actually offered, I was already doing so discreetly hehe). 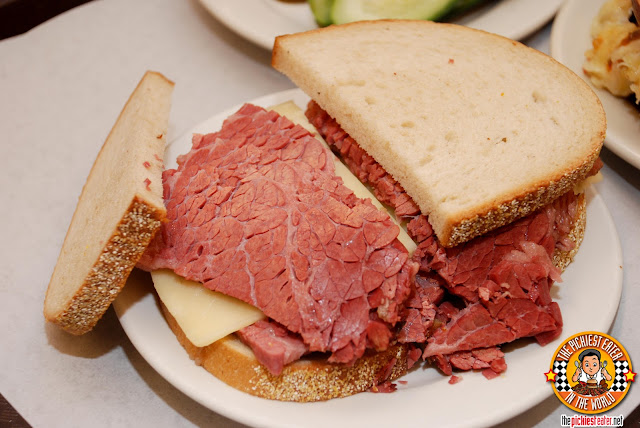 Rina ordered the Corned Beef Brisket with Swiss Cheese on white bread (US$15.45). With all due respect to Mr. Delicious and Hillside Ranch, whose corned beef briskets I have both thoroughly enjoyed... Katz's version was in a whole other league.

Katz's Corned Beef undergoes a month long "Dry Cure" process, before it's ready to be served. 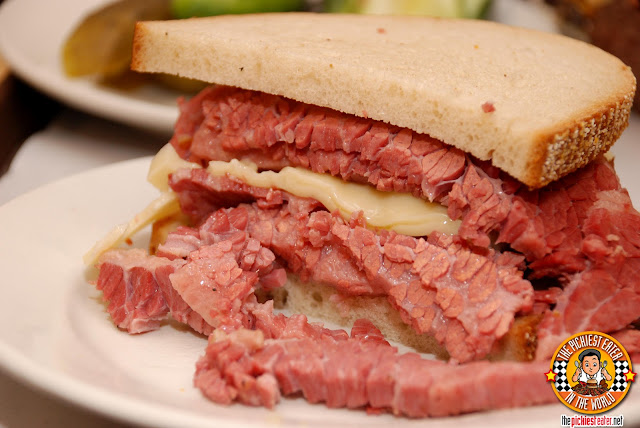 There was an incredible meatiness to the flavor of the beef, and was further enhanced by the creaminess of the Swiss cheese. There was no way a tiny little girl like Rina was going to be able to finish this entire sandwich by herself! 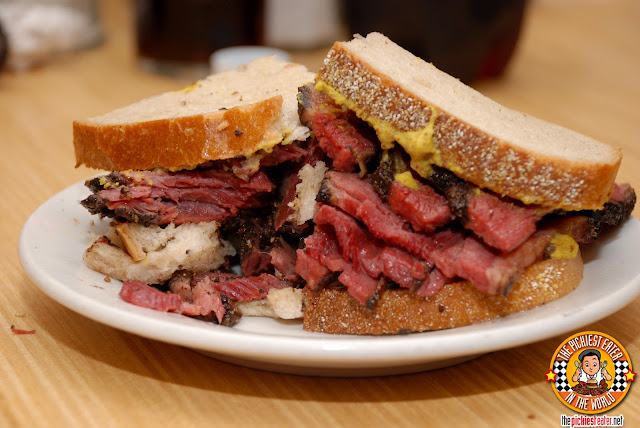 Nano ordered the Pastrami Sandwich on Rye bread (US$15.95). This isn't your average processed deli meat that you can buy at the grocery. This was Pastrami, the way god intended it to be eaten. The meat had a distinct pepperiness to it, coupled with a savory, smokey flavor. Slapping on Hot Mustard on it proved to be a masterstroke, as the tanginess of it, blended perfectly with the meat. 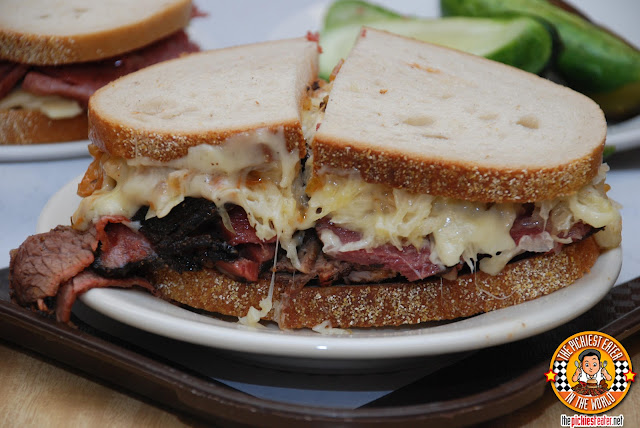 As you can imagine, I wanted the most massive sandwich they had. I asked for a "Combo Sandwich" of Beef Brisket and Pastrami (US$16.95), and asked it to be prepared "Rebuen Style".

I don't know if it's done often in Katz's, because a Reuben sandwich is usually made with Corned Beef. But I wasn't about to go to Katz's Deli for the first time and eat a sandwich with only ONE meat in it, right?

Regardless, this was the best sandwich I have ever had. EVER. 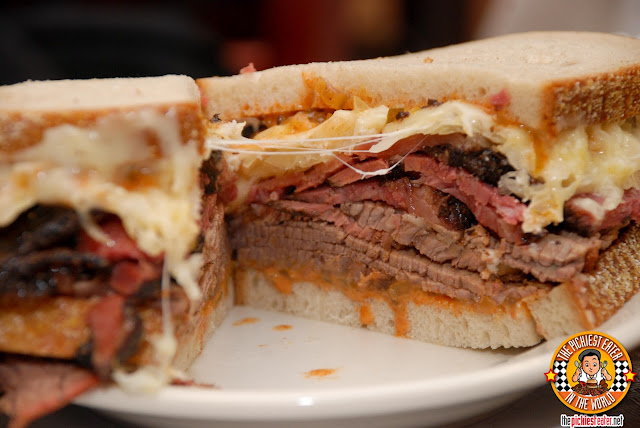 Ordering the two meats into my Reuben (Wait.. Did that sound weird, or is it just me?) was such a brilliant move on my part, I'm expecting a Nobel Prize nomination any day now. With the pinkish color of the pastrami and the deep brown hue of the beef brisket, it was easy to make out which meat was which by just looking at it.

This was so good, you'd think the sandwich was made of pure unicorn meat. The savory flavors of the meats coalesced with the acid on the sauerkraut and the robust Russian dressing, creating a beautiful symphony of flavors that my tastebuds absolutely ROCKED to the beat of. The melted Swiss cheese was the glue that held it all together. 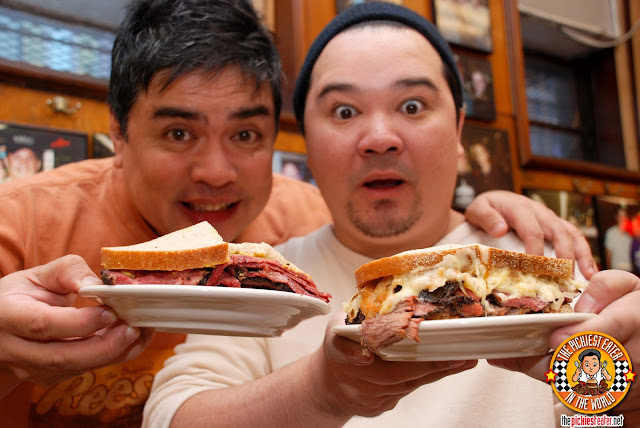 It hasn't even been a year yet since I've been a member of "Spanky's Angels", but i'm glad I was able to meet up with him.. at New York, of all places! He  was the perfect food trip partner to have at New York, most especially at Katz's Deli!

I'm happy that eating at Katz's Deli is finally something I can cross of my bucket list.. and you know what? It was nothing short of amazing.. Definitely worth the long wait!!

Can you believe after devouring the Mt. Everest of Sandwiches, he and his cousin Ana took us on a walking food trip tour around the area (But I'm saving that for another post)! 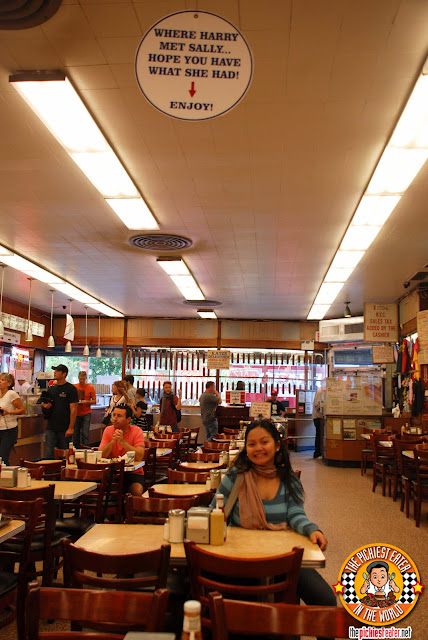 Call me biased, but Meg Ryan ain't got nothing on my sexy Rina 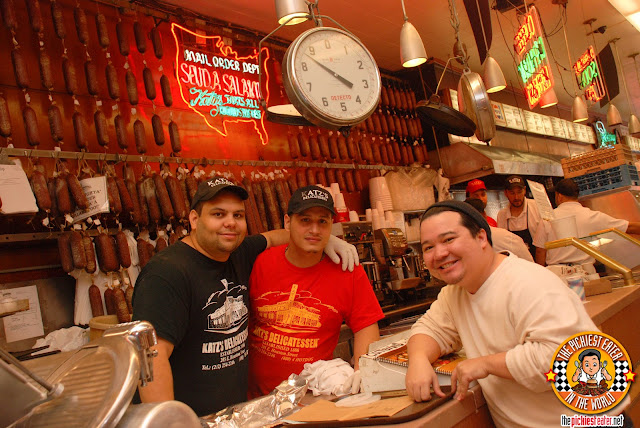 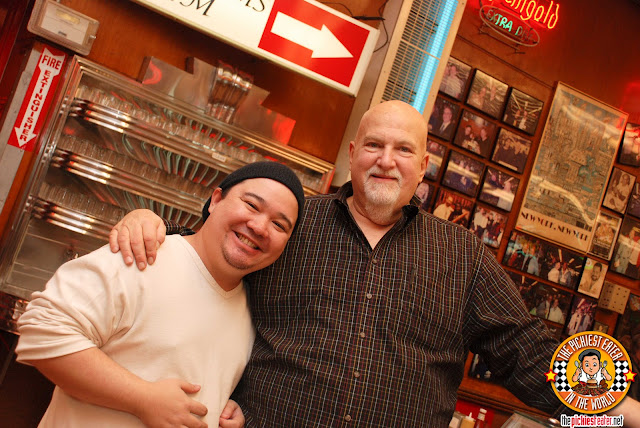 I was fortunate enough to get a picture taken with Mr. Fred Austin,
one of the owners of Katz's Delicatessen! 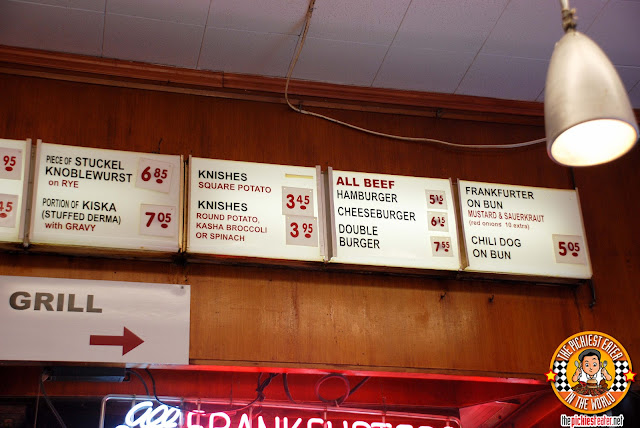 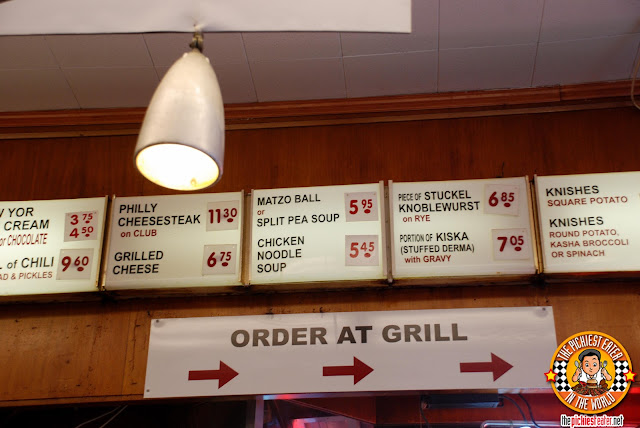 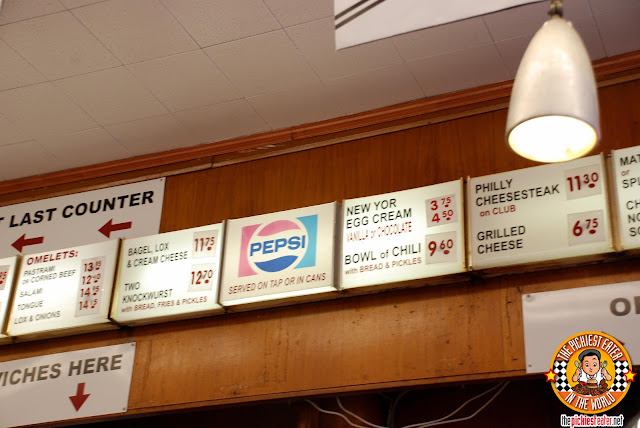 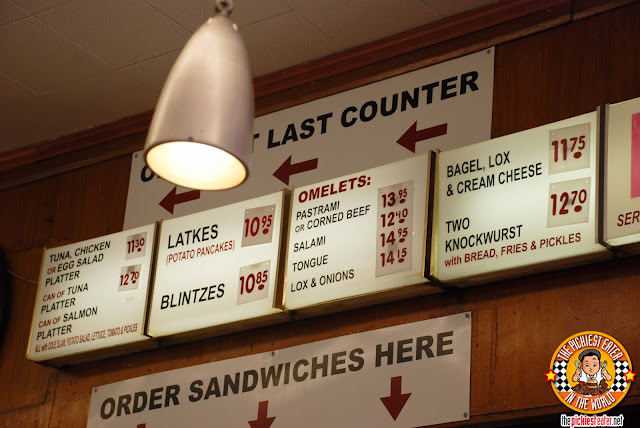 Posted by The Pickiest Eater at 11:00 PM