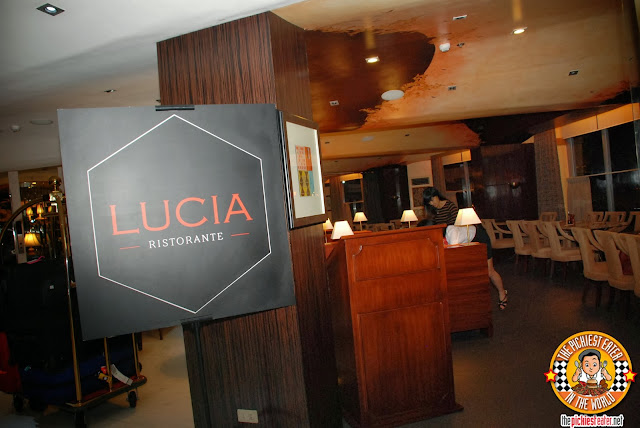 Contestant Number 2 *Buzz*: "Food that the Pickiest Eater In The World Can't Eat!".

Yes, it's the sad truth. My hyper acidity makes eating those beloved Italian classics quite difficult for me. But some nights I can't help myself and be a little naughty. And my dinner at Lucia Ristorante at Celeste Hotel in Makati, was one of those nights. 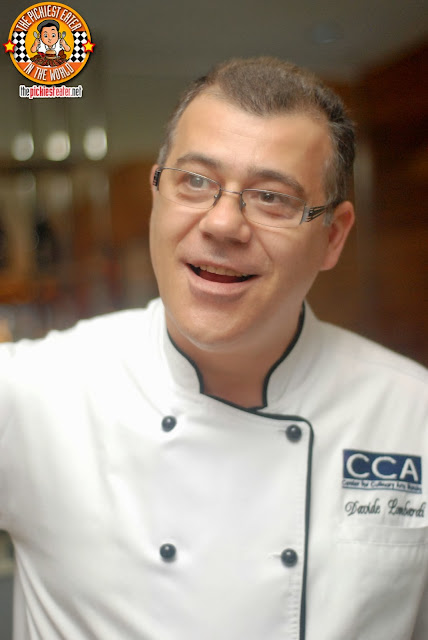 Lucia Ristorante is the brainchild of Chef Davide Lombardi, whom I first met during my visit to Lombardi's Authentic Italian. Rising to the challenge of setting up a restaurant in Hotel Celeste in Makati, Chef Lombardi brought along with him his expertise in the Italian cuisine that he grew up with in Milan, and then elevated it to another level of sophistication at Lucia Ristorante.

The name "Lucia" was bestowed on the restaurant in honor of Chef Lombardi's mother.. The woman that helped instill in him his passion for food. To this very day, his mother's recipes (now with a few tweaks, of course) are the foundation of Chef Lombardi's arsenal of authentic Italian dishes. 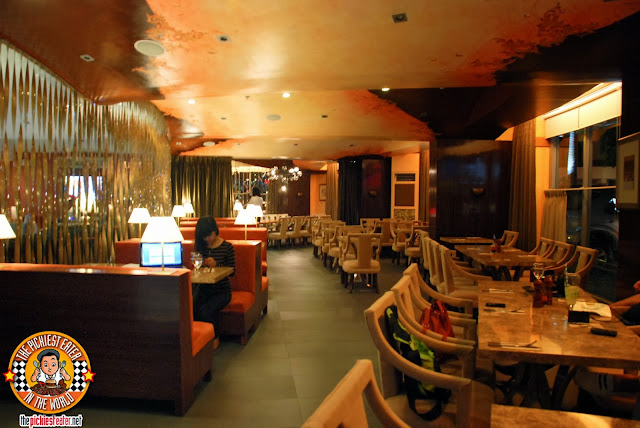 Located at the Ground Floor of Hotel Celeste along Arnaiz Avenue Makati (Where "Mars" used to be. If you know what "Mars" is, then you just showed your age hehe) Lucia Ristorante invokes a quiet elegance and refinement, without the stiffness that some fine dining restaurants exude. The relaxed atmosphere was ideal for a night out with some friends. 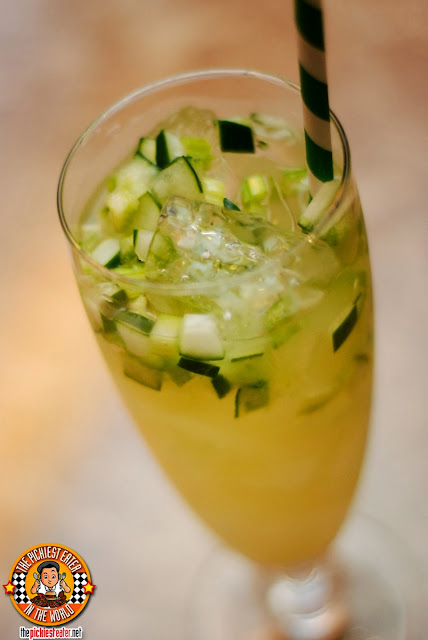 To kick things off, we were served a refreshing Limonata, which featured the strong acid of lemon, with diced cucumbers tossed in. I wasn't a fan of this, as I have a strong aversion to drinks with high citric acid (Hyper acidity), and a stronger aversion to cucumbers (Cuz they suck).

Rina though, found it to be quite refreshing and a nice palate cleanser to wash out the strong flavors of the dishes. 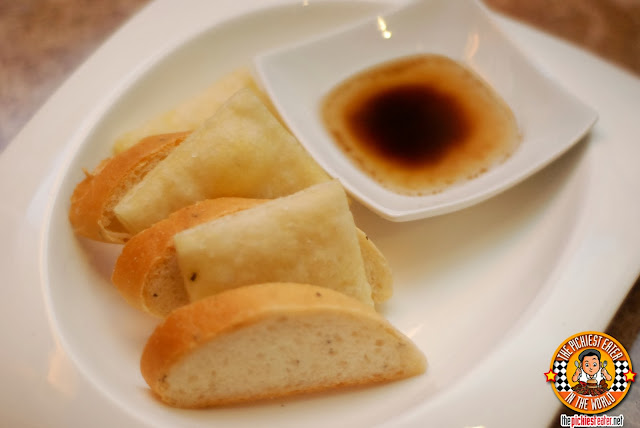 One of my problems when I go to Italian restaurants is that I tend to load up early on the complimentary bread that comes with the meal. I nearly fell into the same trap again with Lucia's bread offerings. The french Baguette had a gorgeous crisp to the edges, while the other piece of bread.. which seemed like a thin slice of ciabatta, was soft and still steaming when I dipped it into a balsamic vinegar bath. 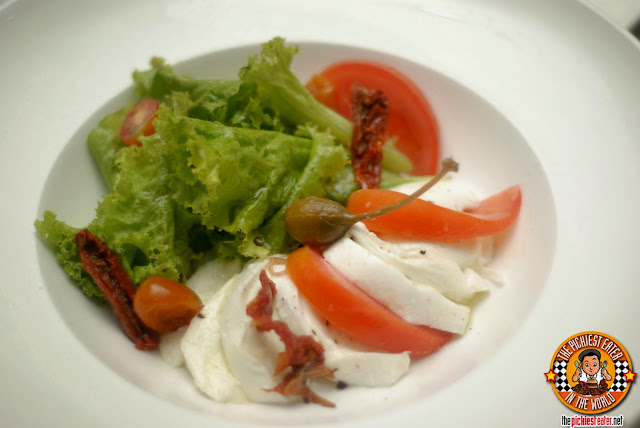 I admit that I initially scoffed when they placed the Mozzarella Di Bufala Al 3 Pomodori (P660) in front of me, because I immediately thought that it was just another one of those salads with tofu or something like that. But when I realized that the white stuff on the plate wasn't tofu but MOZZARELLA CHEESE, I gladly dug into it.

The complex dish consists of Mozzarella Cheese made from Buffalo Milk, and a medley of three different tomatoes: Cherry, Sundried, and Globe. Everyone enjoyed the combination of the cheese with the tomatoes and lettuce, while me, I stayed old school and wolfed down the creamy cheese solo. 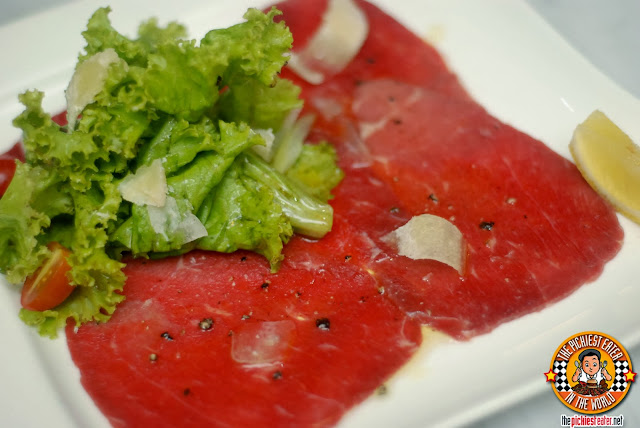 Normally, I would find the thought of eating anything wrong gross. But for some reason, when its Carpaccio, it doesn't count. The Carpaccio Di Manzo Sedana E Grana (P480) reaffirmed that for me. This was a paper thin beef, with stunning speckles of marbling on it, topped off with bits of shredded parmesan, and squeezed lemon. 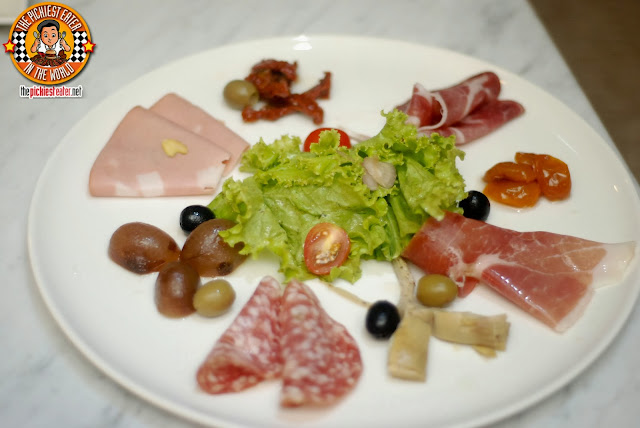 I got my fondness for deli meats from my dad, who used to bring bags full of the stuff, with different cheeses at least twice a week as I was growing up (Fine..Growing sideways.. but at least its still considered "growing"). The Antipasto All 'Italiana (P780) is a dish I would be proud to serve to him.

The platter consists of various Italian Meats, paired with several Italian vegetables, such as olives and pickles. Truthfully, I got the pepperoni and made myself a little sandwich with the bread I was talking about earlier hehe. 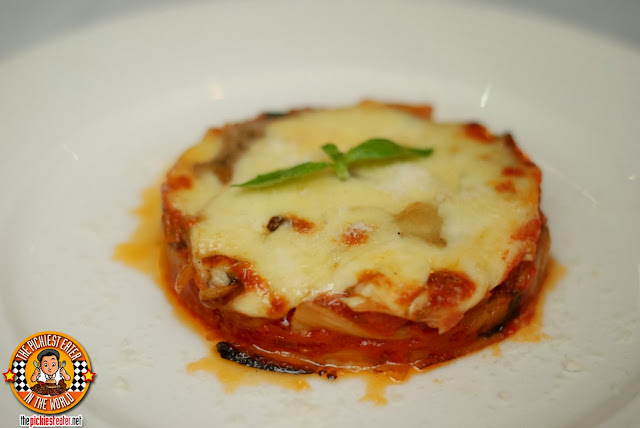 The Parmigiana Di Malanzane (P260), is perhaps one of the few tomato based vegetable dishes that I would risk my hyper acidity for. 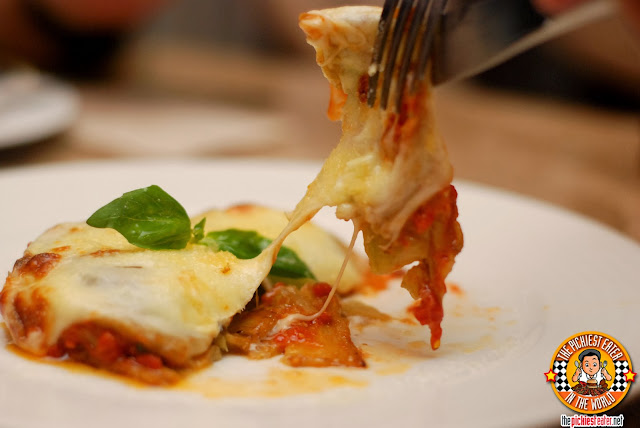 The gooey melted cheese and the acid on the tomato was the perfect compliment to the eggplant, that had an innate smokiness to it.

We didn't have it during our first trip, but when I went back to Lucia, a couple of weeks later, we tried the Lasagna. My dear friend Rain is a lasagna expert, and she considers Lucia one of the best she's ever had. 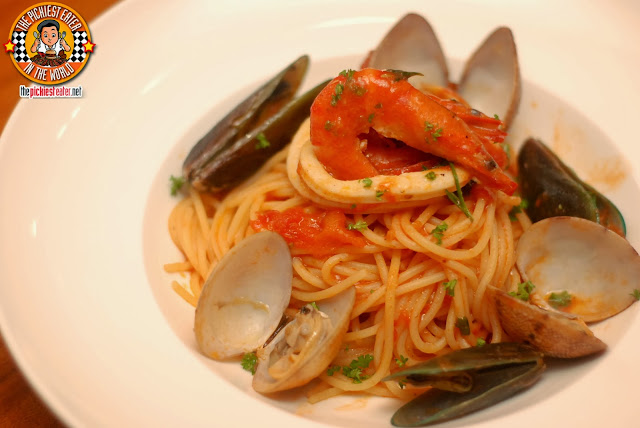 Lucia's signature Pasta dish, the Spaghetti Lucia (P590), lived up to its name. You don't tack your mother's name on to a dish unless you're 100% confident that it's awesome, and Rina re-affirmed that the pasta, made with a symphony of the freshest offerings from the sea, was a knockout. 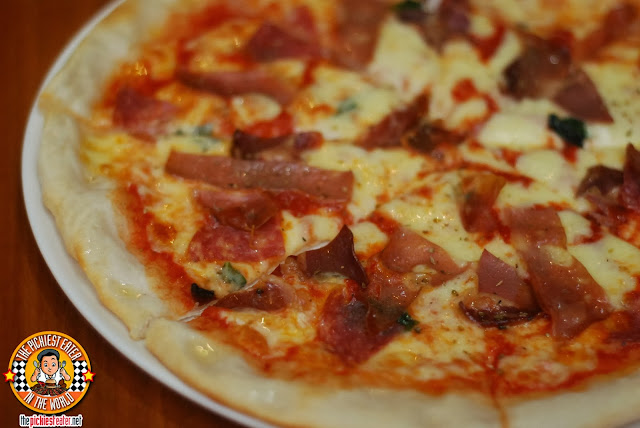 Whenever Rina asks me if I would like to taste a tomato based dish, I'm usually quick to reply with a, "My acids.". However, I could not resist the call of Lucia's Pizza Al Salumi (P490). You can imagine, if i'm going to risk an acid attack, It better be well worth it. And with Lucia's liberal use of various Italian meats, such as Mortadella, Salame Milano, Ham, Salsiccia and Prosciutto, laid out on a thin, crispy crust.. It was worth every bite.

This time, every time I would reach out for a slice, Rina would give me a look and gently remind me, "Your acids.". I would look at her unconcerned, and just say, "Tums lang yan".

You know how some people eat their pizza but leave the crust (weirdos)? With Lucia's, I take the crust and dip it into the Chili Garlic oil that's served in the table.. Delicious!! 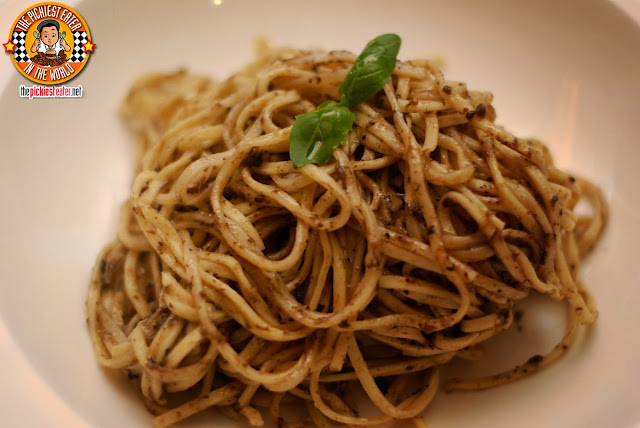 When I saw the black pasta sitting across the table, I didn't give it a second glance. I immediately thought to myself, "Here we go again with yet another squid ink dish that I despise" (I seriously hate the stuff). When they brought it closer to me, the aroma from the dish tickled my senses. The black in this pasta had absolutely nothing to do with squid ink, and everything to do with.. BLACK TRUFFLES.

The Talierini Tartufati (P440) was absolutely exquisite. The Talierini pasta (its sorta like fettuccini) is mixed with mushrooms and black truffles, giving a mild, earthy flavor. It's actually quite complex to describe, especially since I had never really tasted anything like it, so I suggest you take my word for it and taste it for yourself.

Among the dishes we had at Lucia, this is the one that I liked the most (Tied with the fish dish coming up next.. Spoiler alert.). I strongly suggest you try it, but I believe its best shared, because when I went back for a second round a couple of weeks later, I found it a tad cloying. 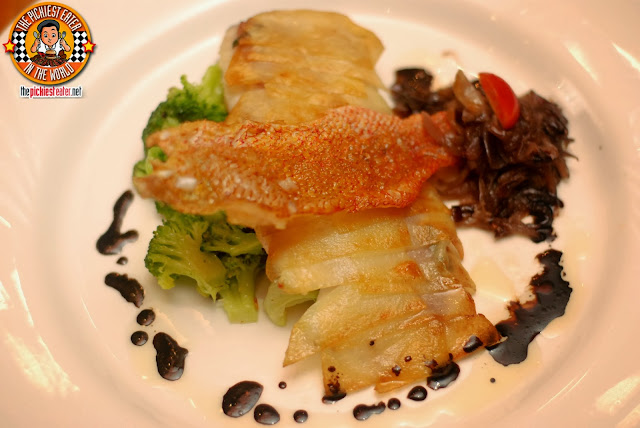 Many people are surprised to find out that I actually really enjoy fish. I understand my picky reputation precedes me, but going nuts over a fish dish like Lucia's Dentice All Pugliese (P460) is a no brainer. Served with Pancetta and Broccoli, the Red Snapper was cooked beautifully, and the skin separated and fried to a stunning crisp. 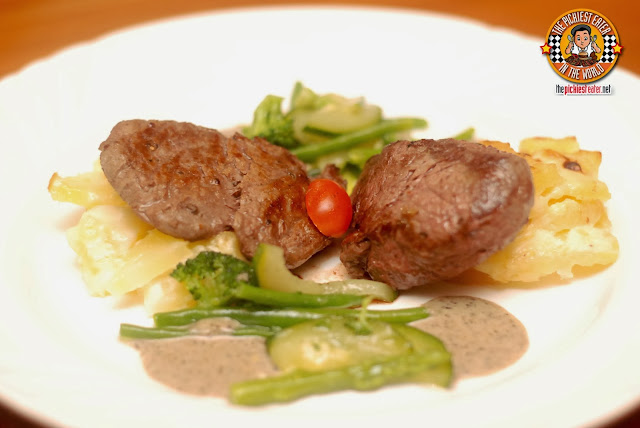 If you're a meat and potatoes kind of guy, than the Bistecca Di Manzo Arrosto (P990) would be right up your alley. A roasted tender fillet of beef, with a rich truffle sauce and tasty scalloped potatoes. This was very good, but I would have preferred a different cut of beef, because, we'll let's face it.. Beef Fillets don't have much fat. 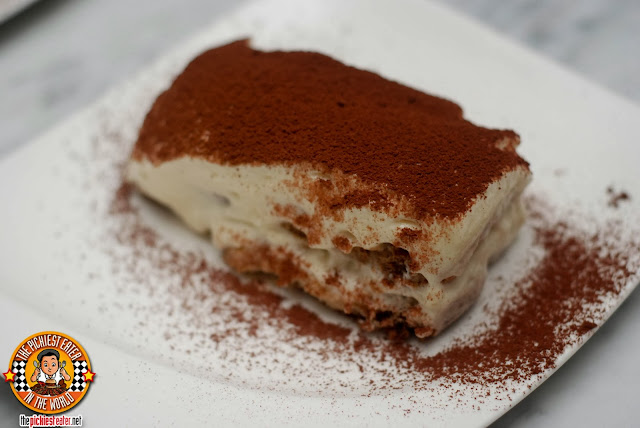 I'm not the biggest fan of Tiramisu (P210), because of the presence of liquor in it, but sometimes I'm willing to make an exception.. Like in the case of Lucia's Tiramisu. The lucious creaminess of the marscapone blended well with the coffee flavor. 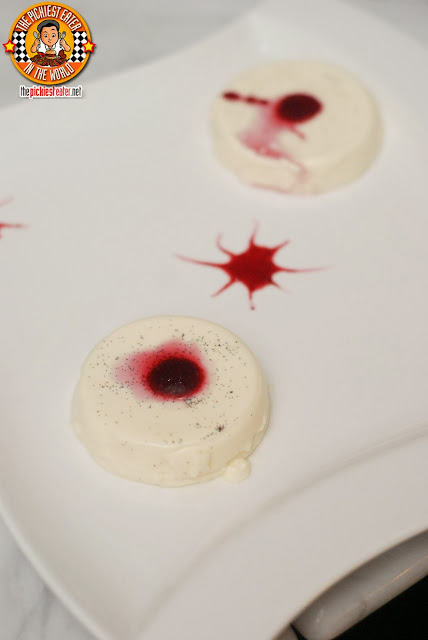 There's something about Pana Cotta that I really enjoy.. And the Pannacotta Del Piemonte (P160) was among the best I've ever had. The creaminess of the Vanilla Bean was prominent, and the sweetness was just right. 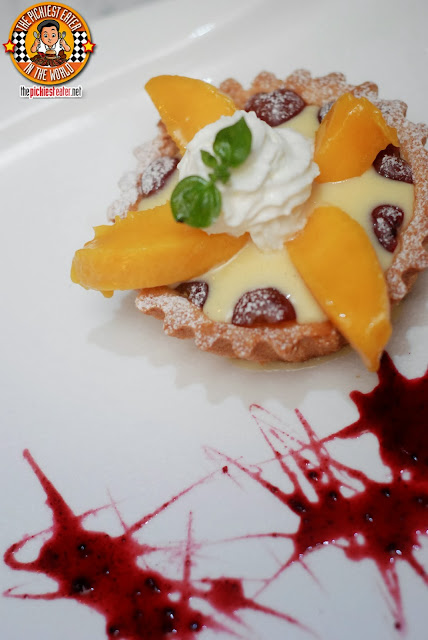 The Crostatina Di Fruitta Fresca (P260) was a medley of fresh fruits, placed in a buttery tart cup, filled with delicious cream. 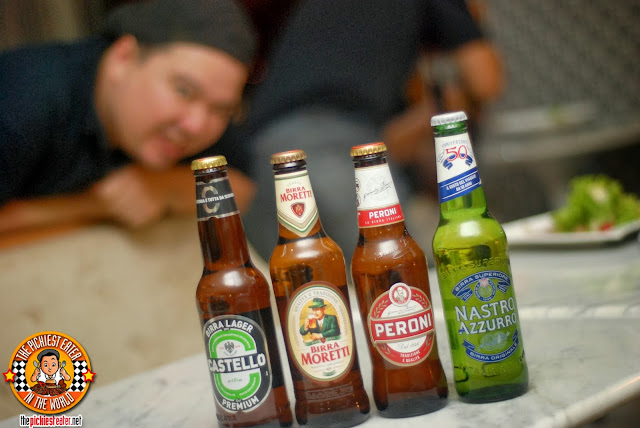 On another note, people who like to enjoy a cold one in the evening to unwind, would enjoy Lucia's Selection of foreign beers. 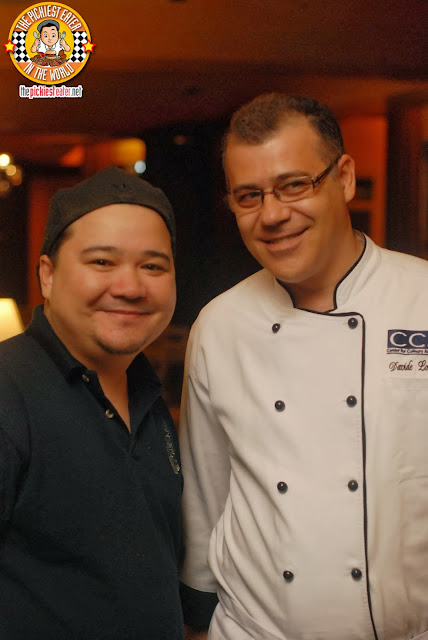 It was truly an honor to dine in Lucia Ristorante, with Chef Davide himself preparing our meals for us. Lucia may be a bit on the pricey side, but considering it's a restaurant in a hotel, it's actually not that bad.

Posted by The Pickiest Eater at 12:06 AM

Email ThisBlogThis!Share to TwitterShare to FacebookShare to Pinterest
Labels: authentic Italian, Italian, Makati, Pizza, Where to eat in Makati