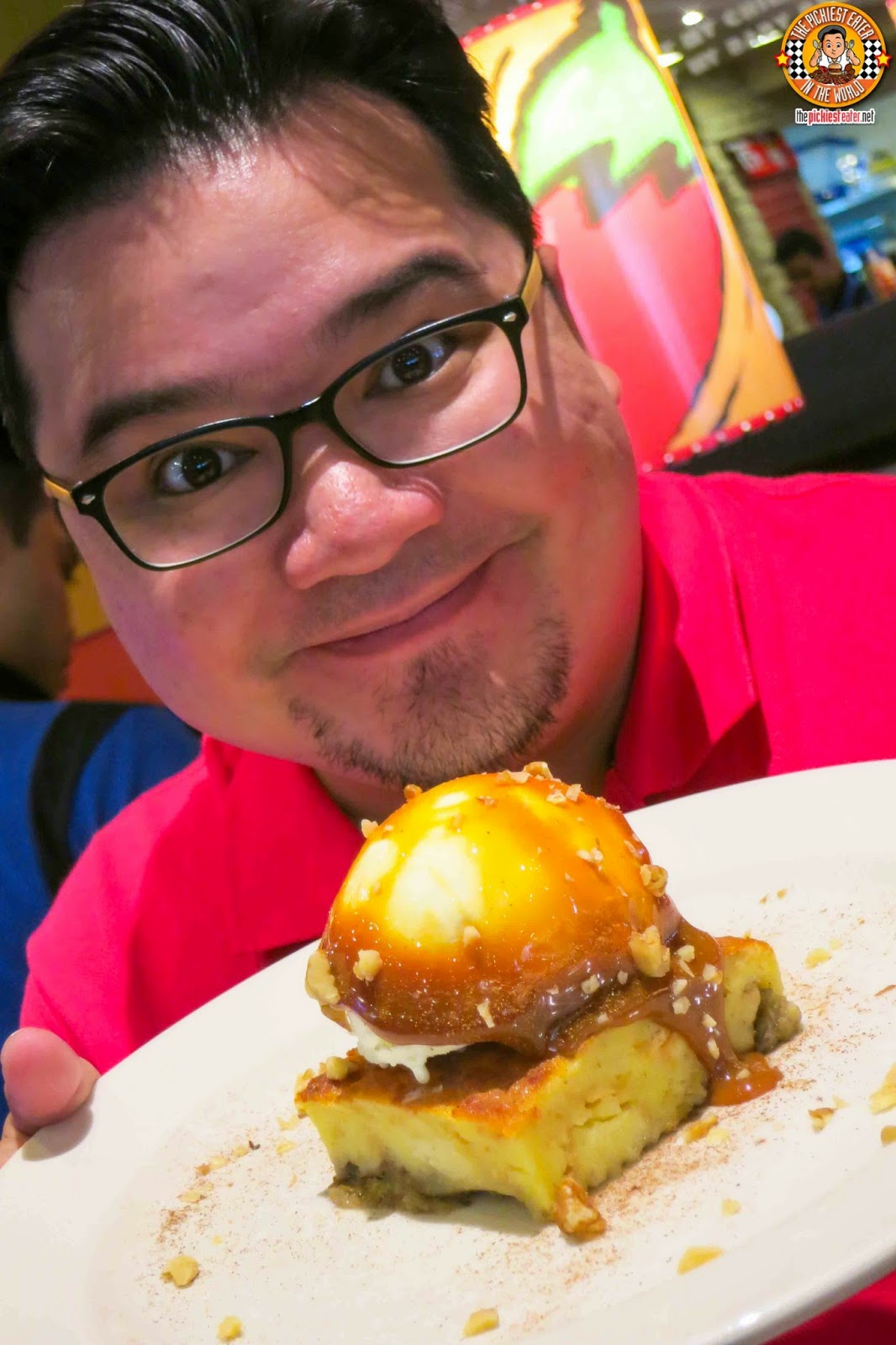 Chili's is one of my go-to restaurants that never fail to satisfy my admittedly Western influenced palate. To this very day, I still have dirty dreams about Chili's Big Mouth Burger Bites (Don't ask). Although I would have no problems ordering those sliders from heaven over and over and over again, I was elated to find out that they recently added more items to their already awesome menu, and I couldn't wait to try them out!

Why? Because they had a brand new Steak dish.. covered in Cheese.. and.....

You guessed it. BACON. 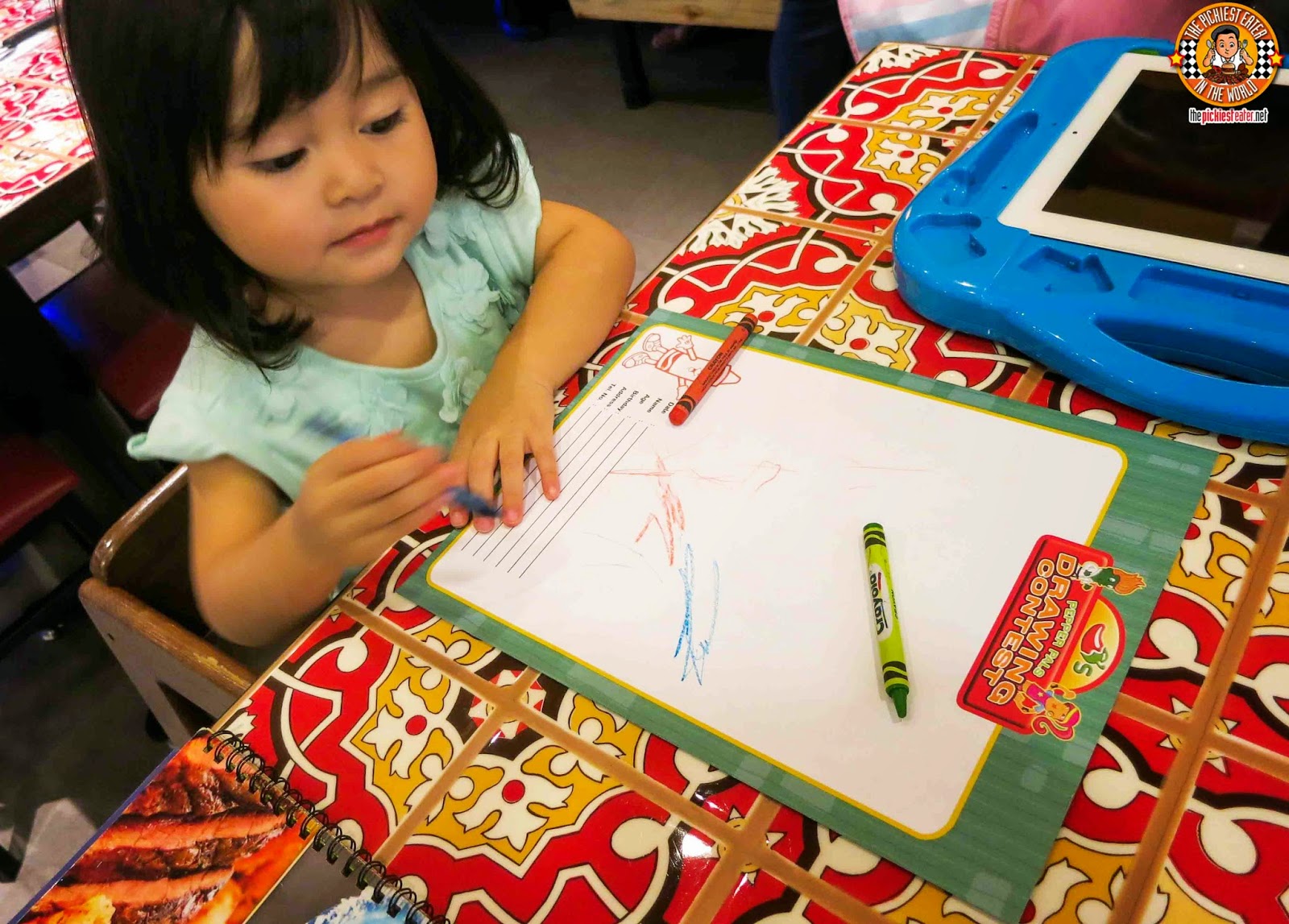 One thing about Chili's that I have to commend off the bat, is how they immediately make you feel right at home, living up to their new tagline, "More Life Happens Here". Within seconds of our arrival, our server had some coloring sheets and crayons prepared for Baby Rain, who happily doodled away while we waited for our orders. The service was swift and concise, with our server checking on us promptly and willing to help us in case we needed anything.

Anyway, back to the food... 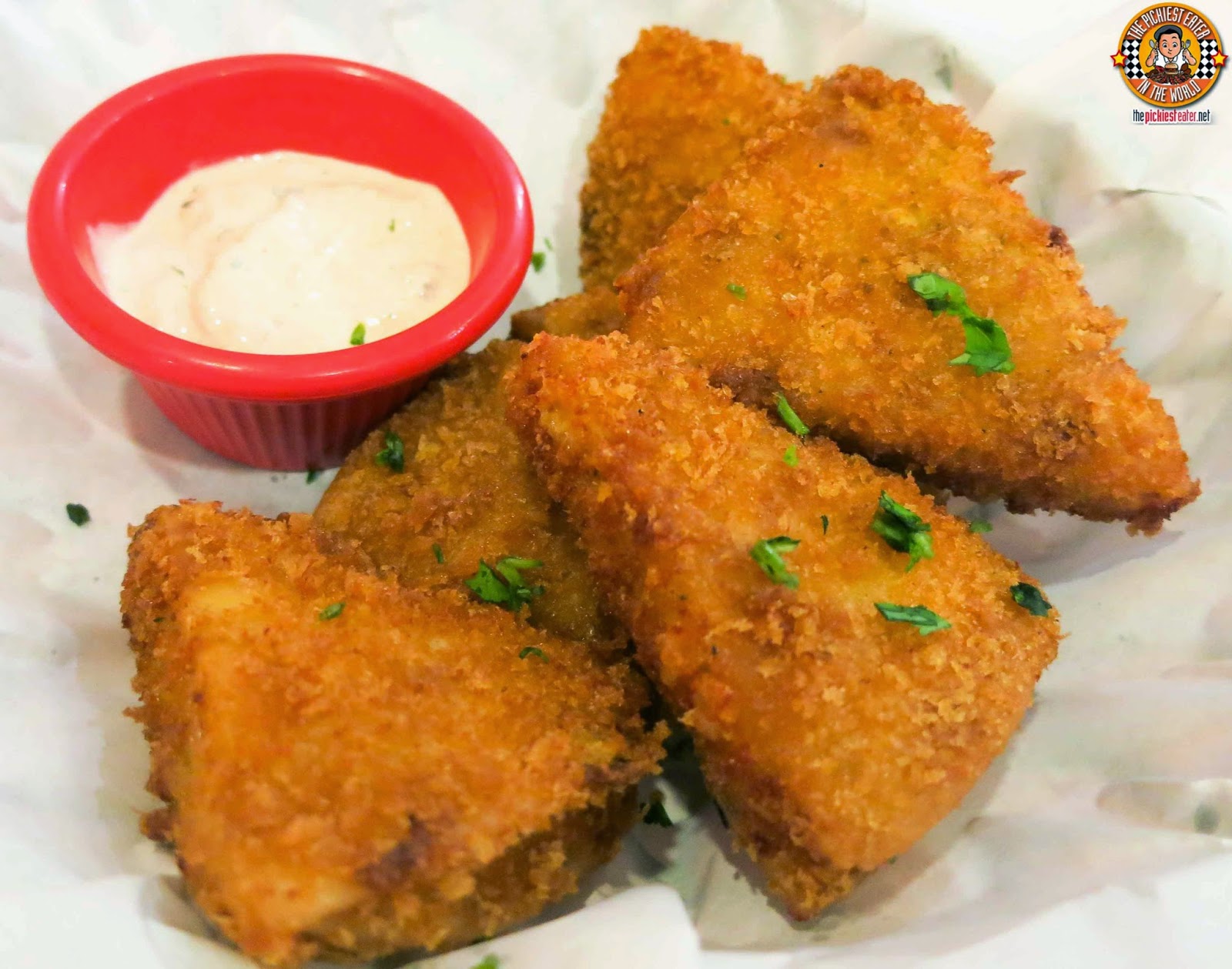 The appetizer dish that Chili's recently launched, is the Fried Quesadilla Bites (P375). Quesadillas are one of the few Mexican dishes that i really enjoy, so I was excited to try their new twist to this Mexican classic. 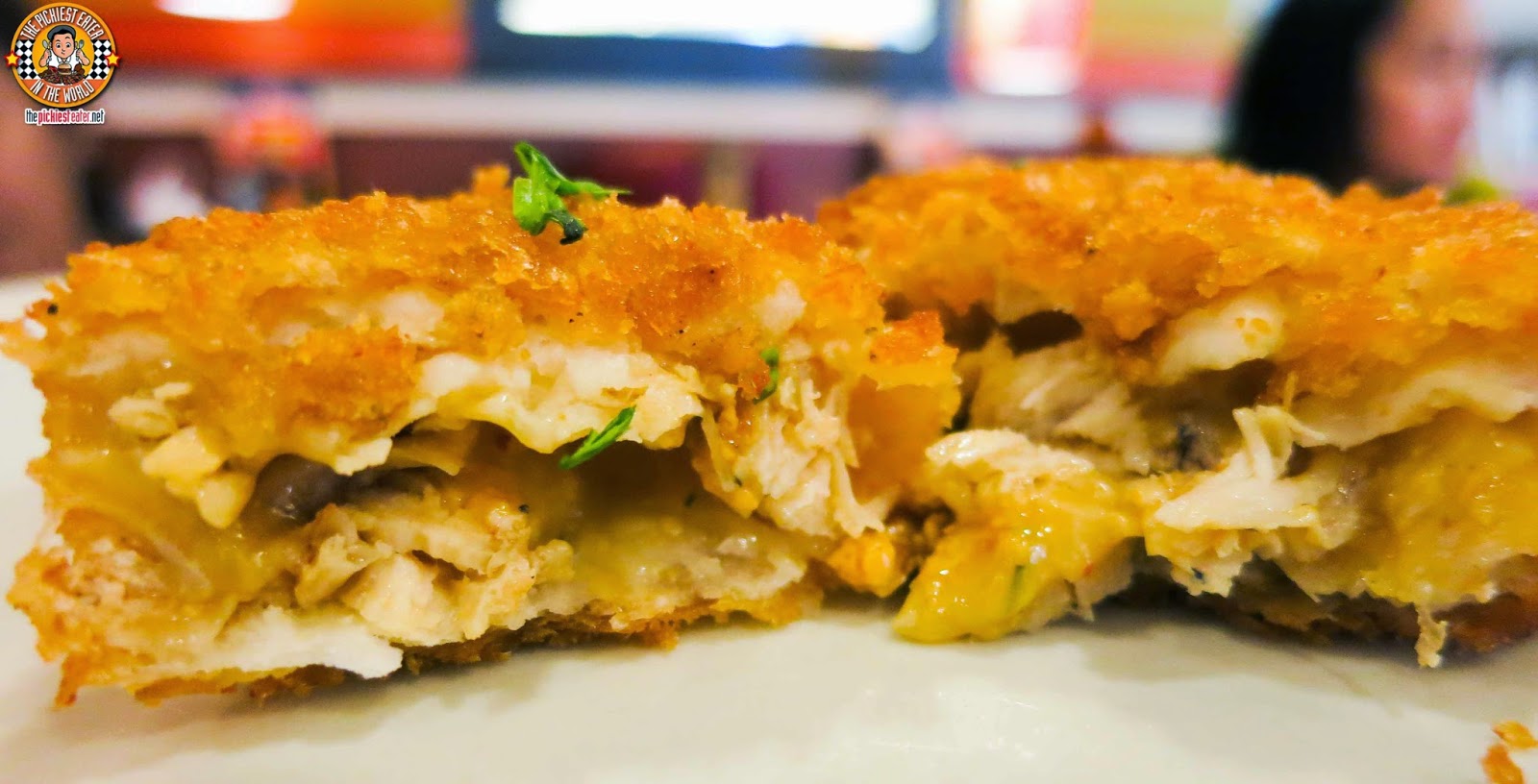 The Flour tortillas a filled with cheese and chunks of tasty chicken, grilled the Southwestern way. It then bathed in a delicous batter, and deep fried, creating a light crust around it, giving it a lovely crunch with every bite. The "Bites" are then served with a Chipotle Sour Cream sauce that compliment it perfectly. 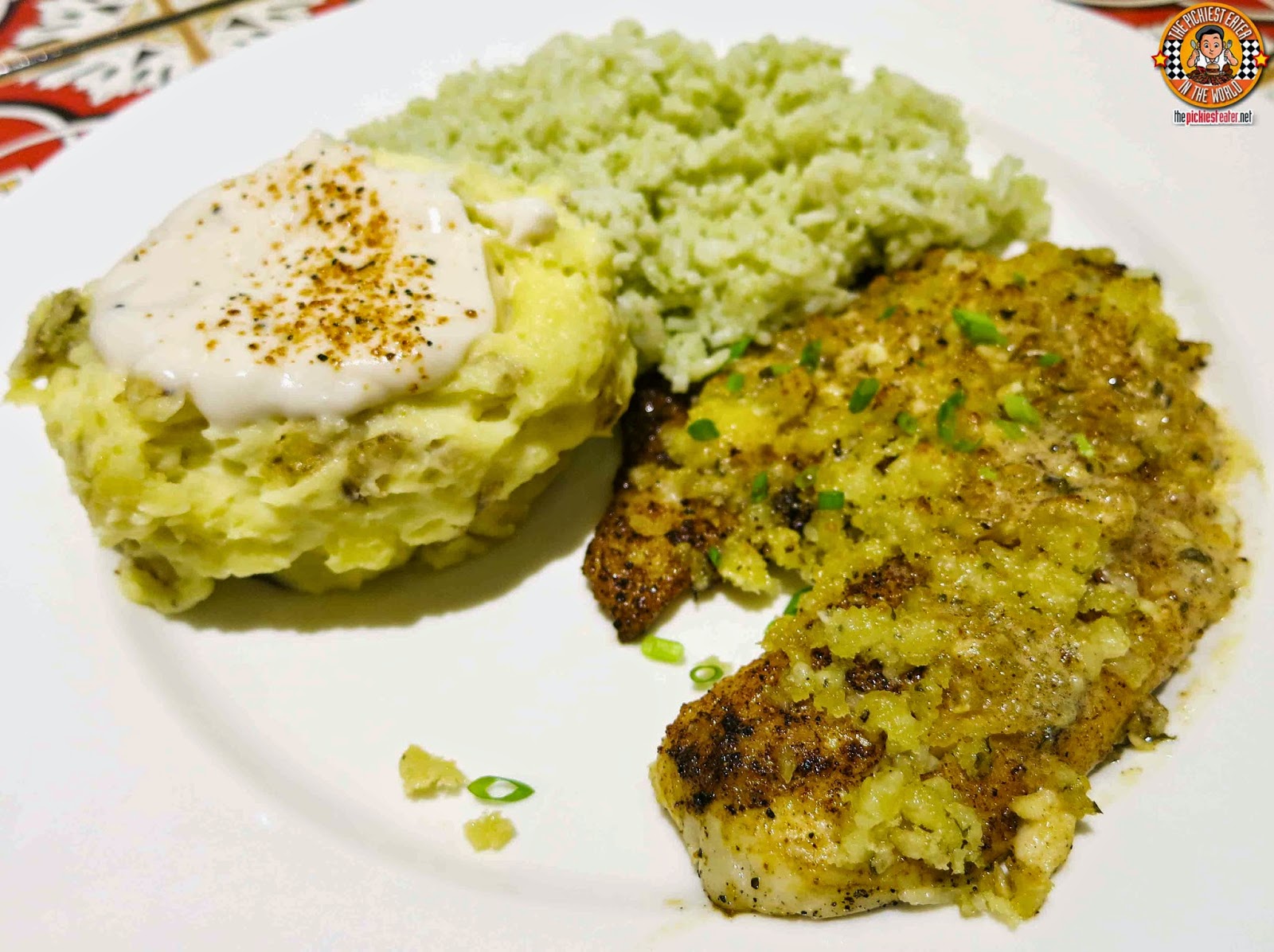 The next dish I tried was the Parmesan Tilapia (P425). This is a fish dish, so I wasn't supposed to like this.. But I absolutely loved it. The fish itself was cooked masterfully. One slice with my fork revealed a pristine, white meat that seemed to melt at the touch of my tongue.

But as wonderful as the fish meat was, the magic seemed to come from it's Parmesan crust. Made with both Parmesan and Monterey Jack Cheese, the crust adds a layer of texture to the smoothness of the fish, not to mention an added punch of flavor. You may enjoy your dish with your choice of sides: Cilantro Rice, Mashed Potatoes, Homestyle Fries, Corn on The Cob, Fresh Veggies, Steamed White Rice, and Broccoli Spears. 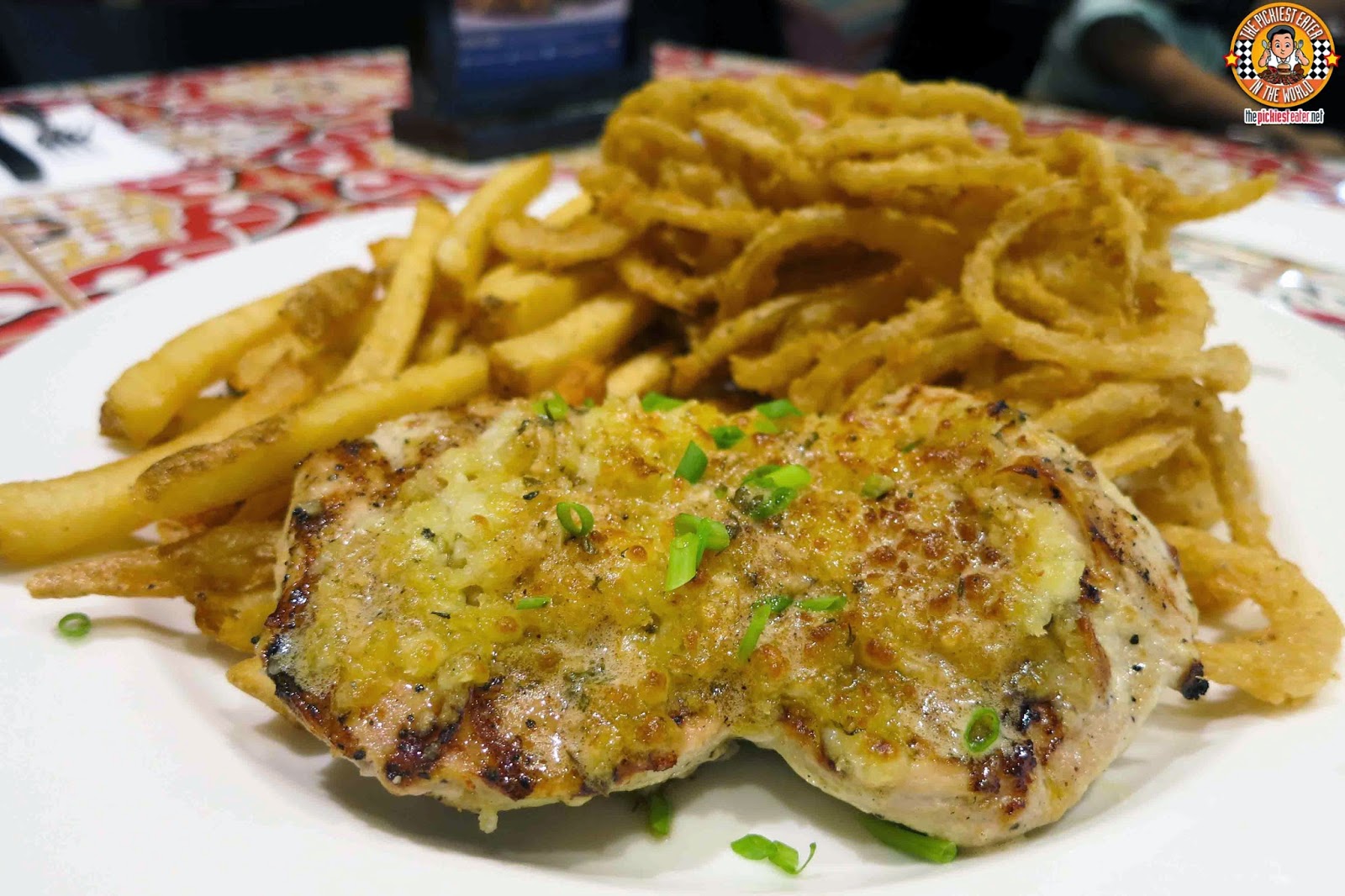 If you're not too keen on having fish, you could opt to have the Parmesan Chicken (P395) instead. The Tilapia Fillet is replaced with a chicken breast, making it a bit more friendly to those.. umm.. Picky "Finicky" Eaters.

Honestly, I prefer the fish much more, because I found it to be much juicier than the grilled chicken breast. 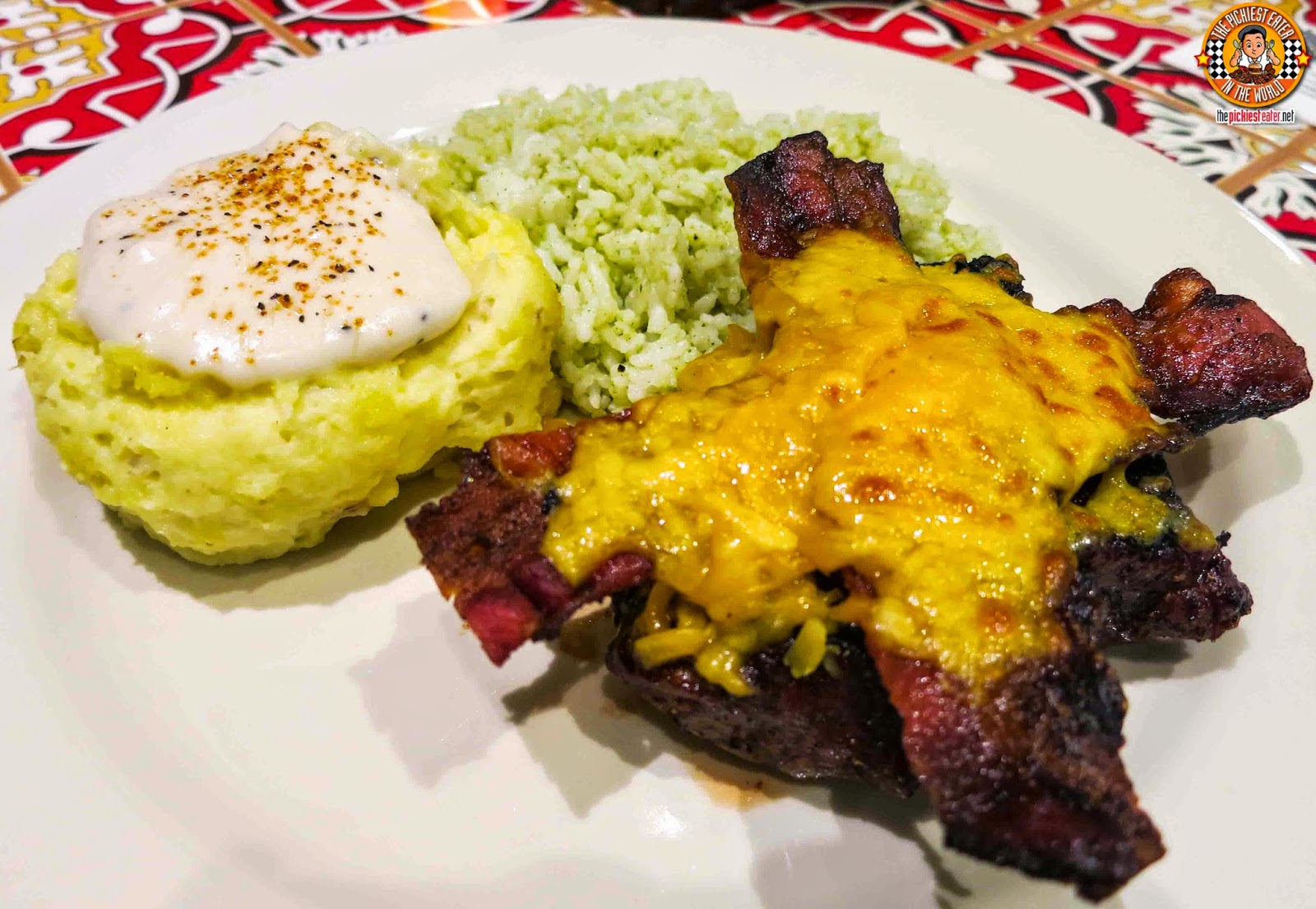 Proving that they are totally in touch with the taste of their customers, well, at the very least, in touch with MY taste, Chili's released the Bacon Cheddar Steak (P875).

Two slices of crispy smoked bacon are laid on top of a stunning Southwestern seasoned steak, and topped with melted cheddar cheese. This was phenomenal, but If I could make a suggestion, it would be to use a cut of steak with a little bit more fat, but that of course, is my personal preference. (They probably used a leaner cut to compensate for the fat content of the bacon.. but I'm a "more fat, the merrier" kind of guy hehe) 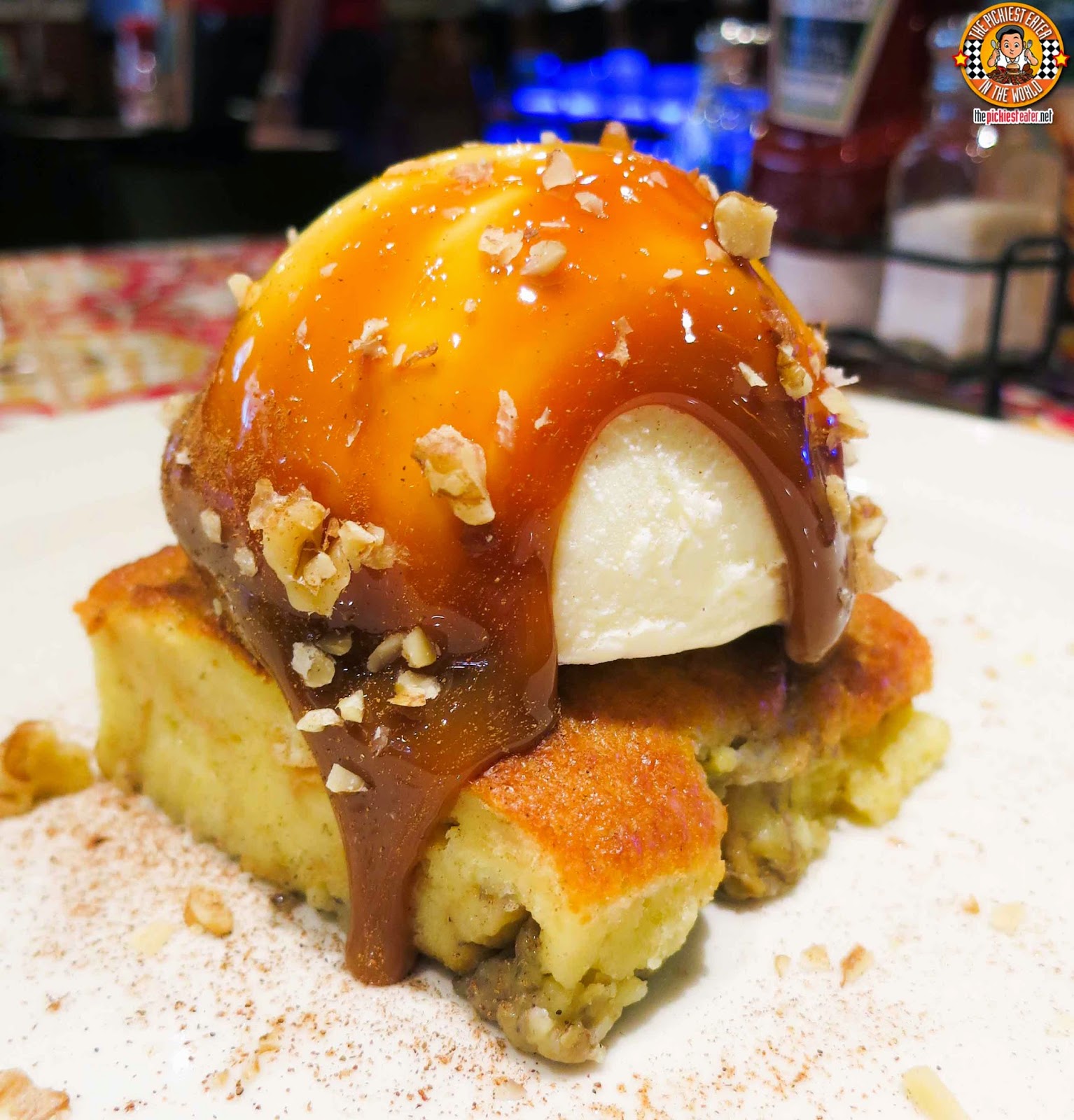 Their new dessert, the Banana Bread Pudding (P295) is a winner. Not many people enjoy the combination of Banana and Cinnamon, but I thought it worked together beautifully, especially when balanced out by the Vanilla Ice Cream, and the touch of sweetness from the caramel topping. 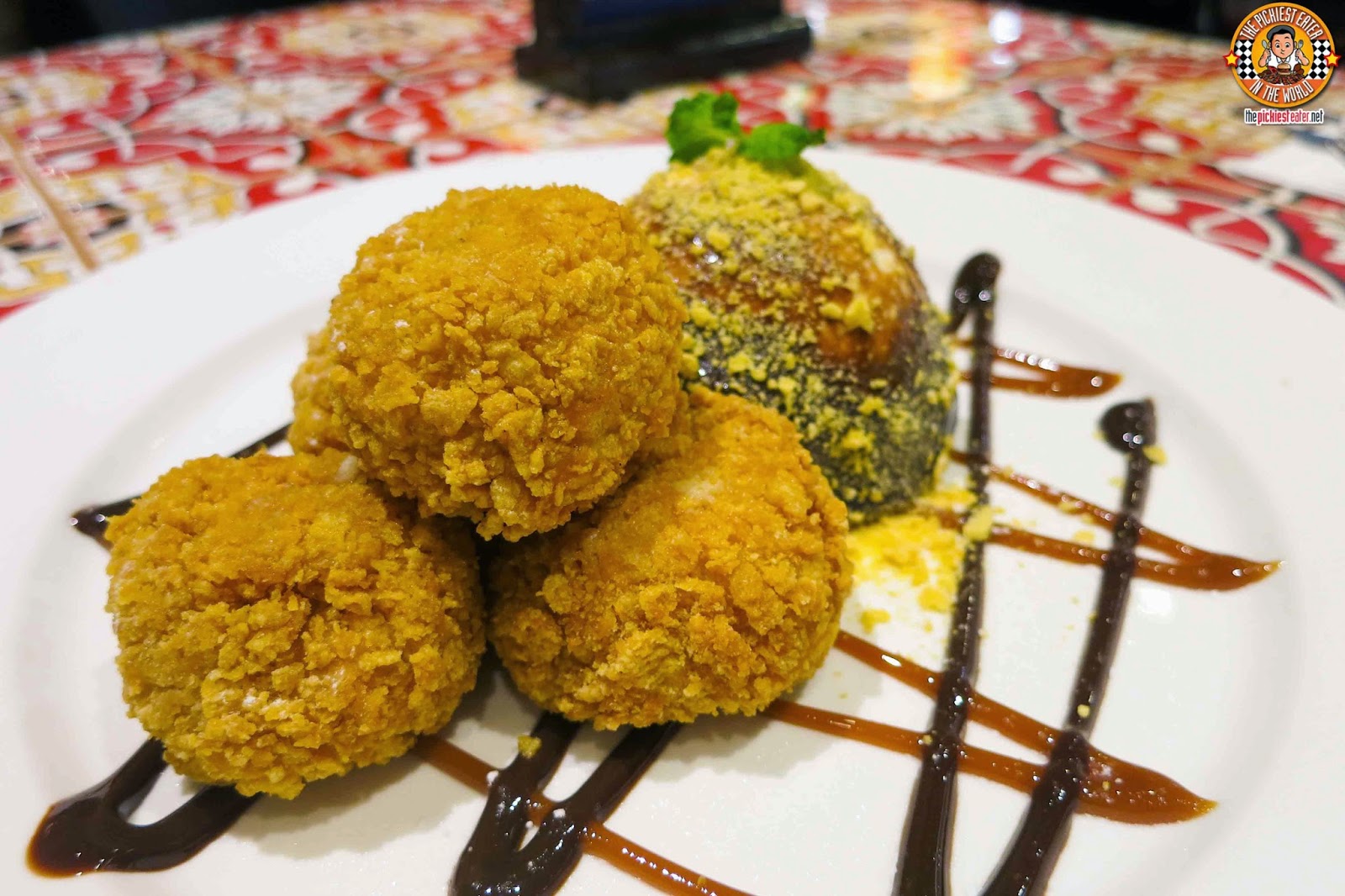 As good as the Banana Bread Pudding was, I was powerless against the lure of an old staple of Chili's dessert menu.. The Deep Fried Cheesecake (P350). Cheesecake bites are rolled into balls, dipped into a rich batter and thrown into the deep fryer. The tartness of the cheesecake was just right, and was complimented by the ice cream drizzed in a medley of Caramel and Chocolate Sauce.

Definitely a must-try when you visit Chili's! 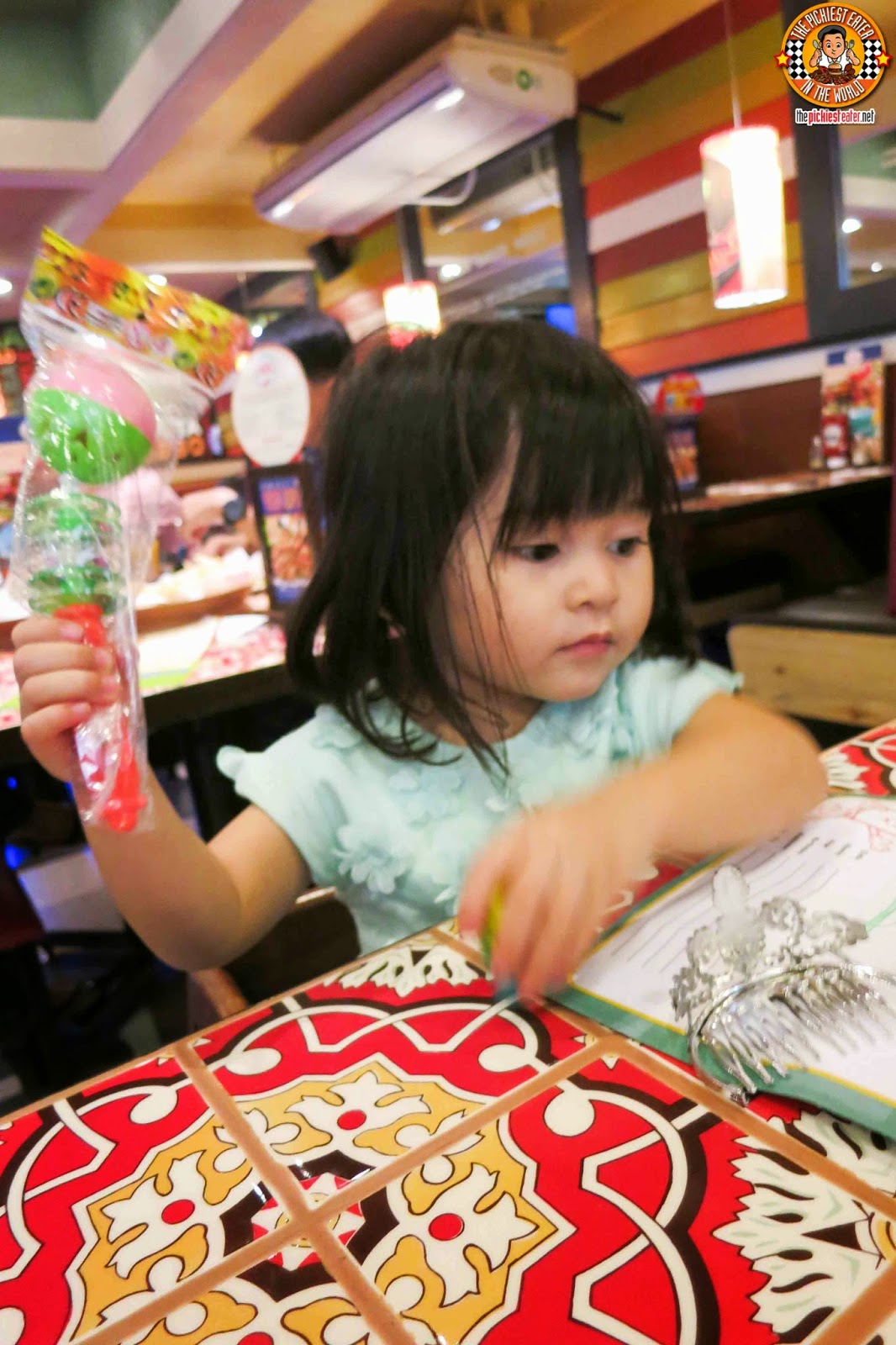 By the time we were ready to leave, Baby Rain was so at home, she was even given a toy to help make her very first experience and Chili's even more memorable! 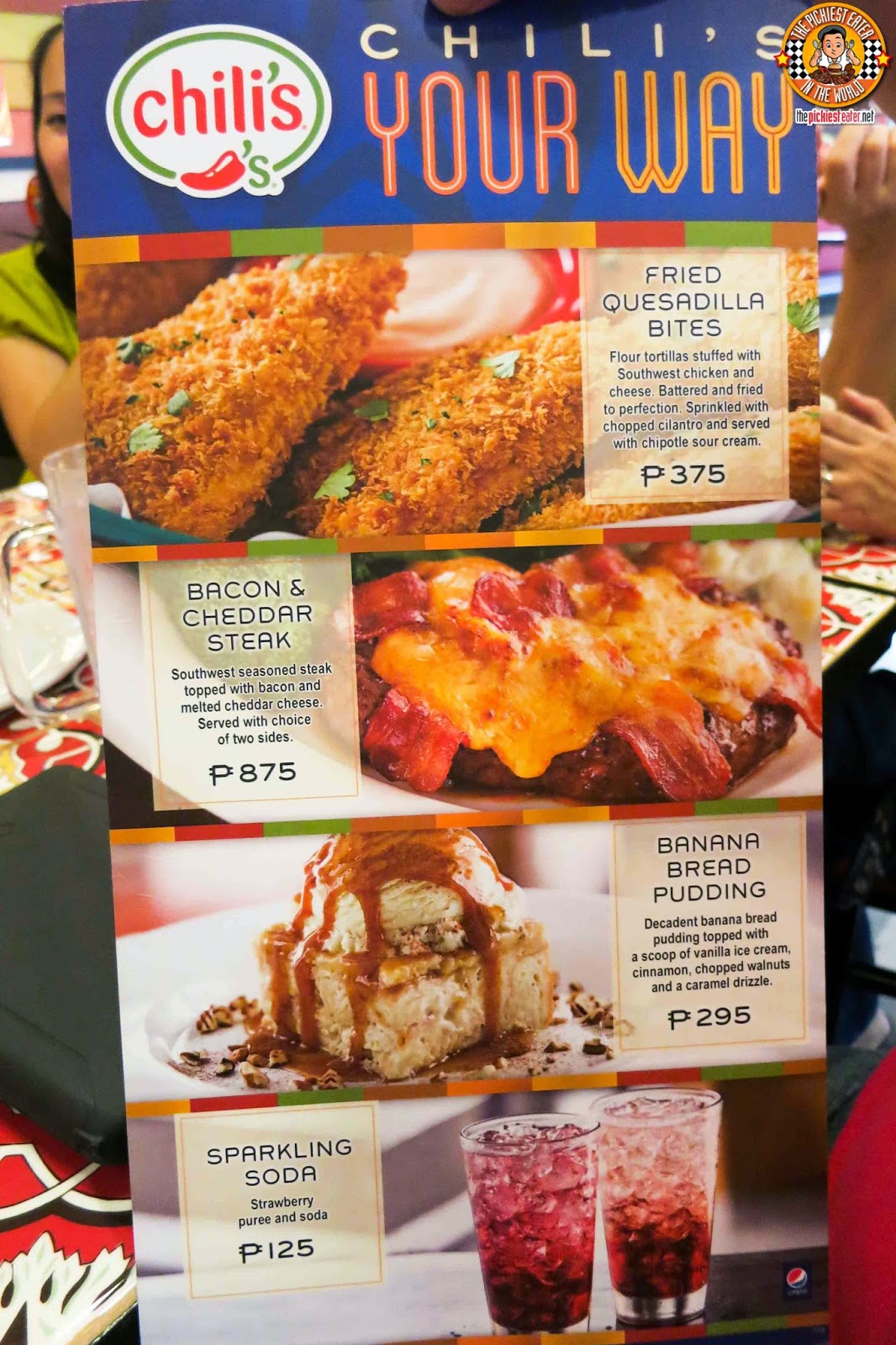 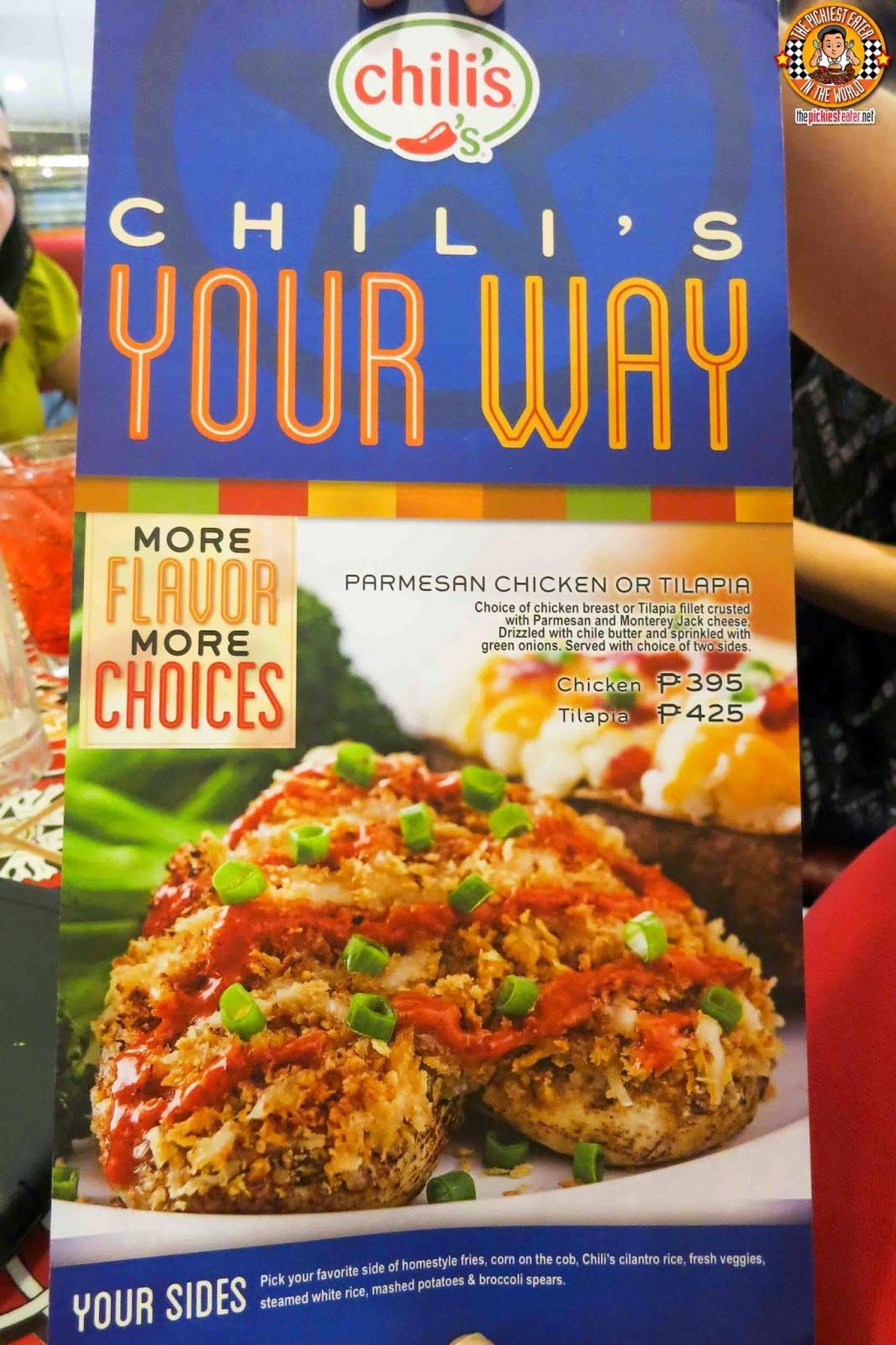