Hi Everyone!
A special shout out to everyone that watched the First Episode of the Pickiest Eater Web Series!


I said I would be happy if we could get 500 views, and so far we've got over 1,400 and counting!
We are currently planning the second episode, and I hope you'll enjoy it as much as the first!
In case you haven't seen it yet, you can watch it here:
Pickiest Eater: Episode 1

Anyways, I wanted to once again apologize for the the decreased frequency of my posts.
My family has ventured once again into the food business, and so I've been spending most of my time making sure it opens smoothly.

If you are in the area, please feel free to drop by The Grill Boy, located at 2nd Floor of The Spark Place, along P. Tuazon St. in Cubao (Across SM Cubao)!

I'm there every day, so in case you see me, please feel free to say hello :)

Anyway, back to regular programming.. For now.. 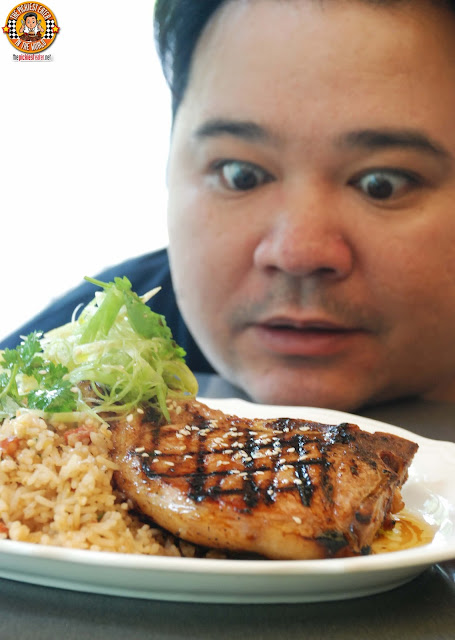 I've been a fan of Chef Katrina Alcantarasince my first trip to Mesclun Bistro a couple of years ago. Her food always exudes finesse, and impressive knowledge of classic techniques. It's always interesting hearing her explain how a dish came about (often using French terms that I have no clue what they mean, so I just nod along like I do, saying, "Uh huh") through her different experiences.

Her latest concept, CDP Global Table, is a collaboration with seasoned restaurateurs Malou Fores and Kristine Locsin, that takes your senses on to a culinary voyage through different dishes inspired from their travels together.

Luckily I was able to tag along for the ride! 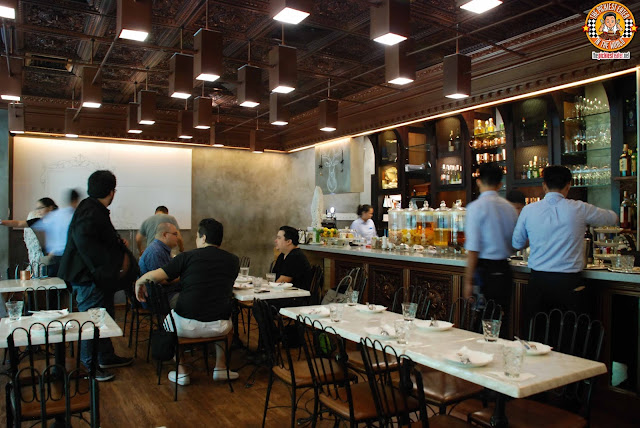 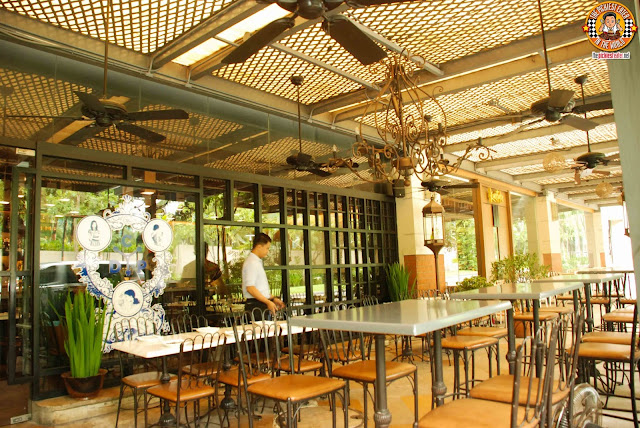 Though the inside dining area isn't very large, its ambiance is rather charming and relaxing. If you prefer dining Al Fresco, CDP Global Table (Which stands for "Chef Du Partie"), has got you covered as well. 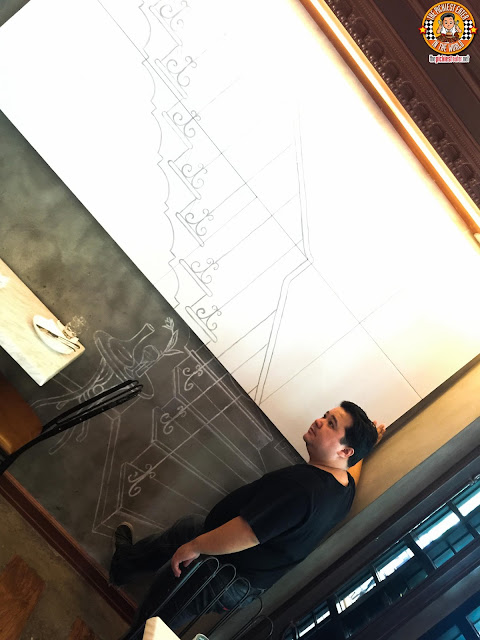 Artistic touches of chalk-like drawings adorn the wall, giving the illusion of space (and inevitably, a bukol to my head.. I really thought there was a second floor). 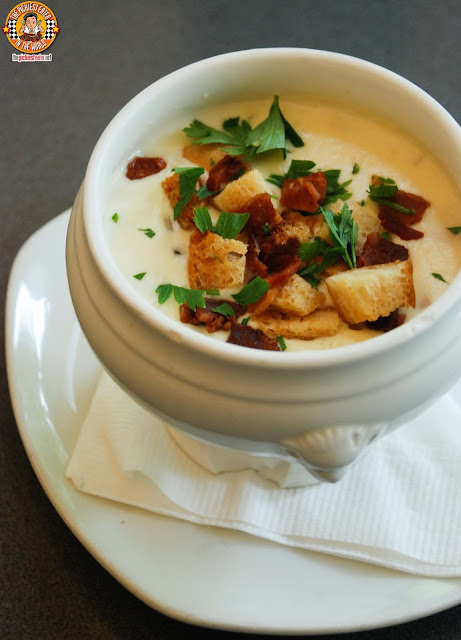 First up was the soups. As proof that I am helpless against the power of Bacon, just the sight of crumbled bacon was enough to make me to grab a spoon and dig in, without asking what it was. Apparently it was Clam Chowder (P325) - a dish that I don't normally eat. Though I normally stray away from clams, I had no regrets jamming this spoonful of creamy goodness into my mouth. The Manila Clams swimming in a flavorful Clam Broth were actually delicious, and worked magically with the Creamy base, with the Potato adding some texture and the bacon a gentle hint of smokiness. 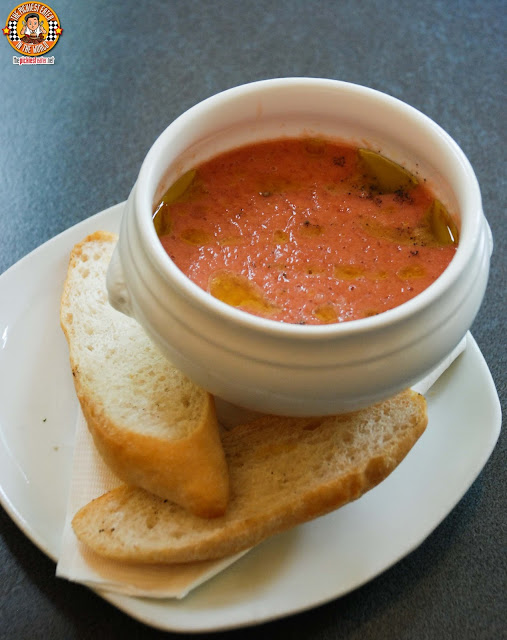 This marked the first time I tried Tomato Gazpacho (P285), which was served cold. Although it was made primarily with tomato meaning I could only really have a teeny tiny sip of it, I couldn't help but appreciate the freshness of the robust tomato mixed with a drizzling of Extra Virgin Olive Oil. I just wish it didn't have any cucumber in it, because that's one of the many vegetables I abhor. 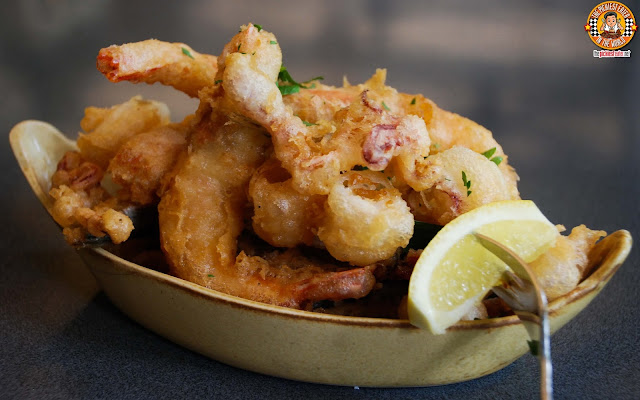 Holy crap, you guys have to try the Pig's Ears Fries (P295) of CDP Global table! Thin strips of meaty deep fried perfection. I had no idea pig ears could be so tasty, so this was quite a revelation. Though it came with an Anchovy Vinaigrette, I was happy to eat it, with just the tiniest drops of fresh lemon. 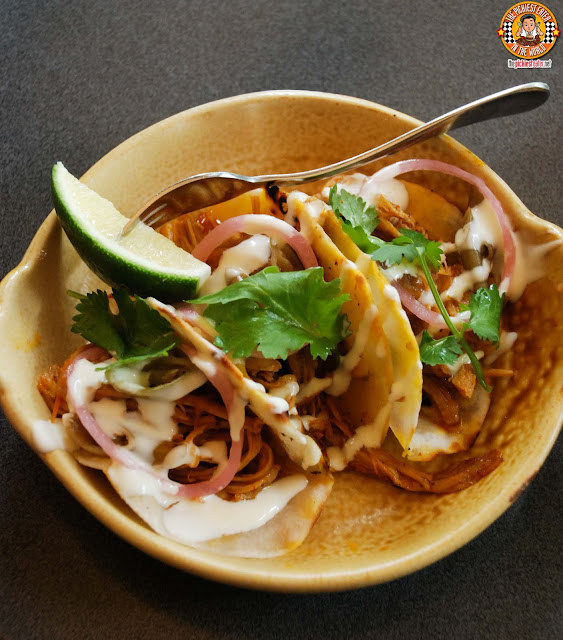 I'm a sucker for anything pulled pork, so I was excited to try the Soft Pork Tacos (P235). A generous heaping of shredded stewed pork piled on to a homemade Tortilla, and topped with pickled onions that gives a wonderful spin of acidity to the dish, that is balanced out by a drizzling of Sour Cream. 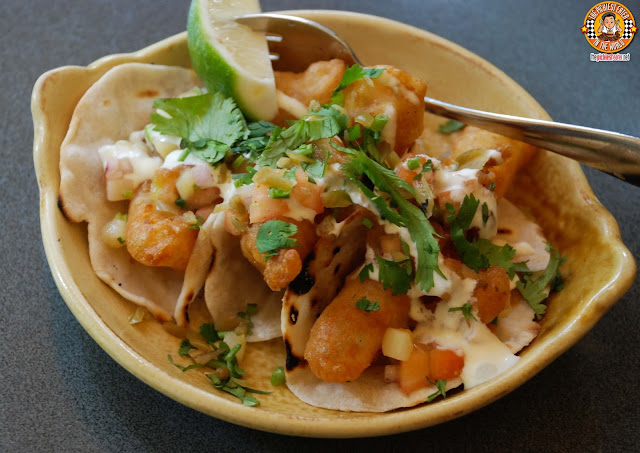 Given that I just professed my love for pulled pork, you know I mean business when I say that I preferred the Beer Battered Fish Tacos to its porky counterpart. Don't get me wrong.. I enjoyed the pulled pork too, but the cook on the fish fillet was the deal breaker for me. The cutlets of fish were coated in a glorious beer batter that let out a melodic crunch with every bite, yet the meat maintained an immaculate white hue. The squeezing of the lime juice on to the fish gives it an added vibrance, but again, the sour cream serves as a nice counter.

When we went, I believe this was off the menu but I hope it's a permanent fixture by now! 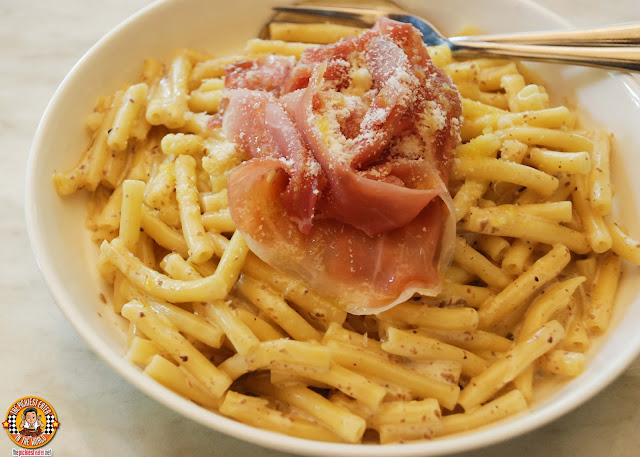 I was quite relieved that Chef Katrina served us a cream based pasta, as opposed to a tomato based one (I think I reached my tomato quota for the day with the Gazpacho). But what made this even more enjoyable for me, was it was that it wasn't just your average cream based pasta either.. It was Truffle Maccheroni (P495). Using simple Macaroni, or as we call it in Italy, "Maccheroni" (just call me "Zamorelli"), is mixed into some white truffle paste, cream, finely grated grana padano, and topped with a slice of Parma Ham, that had a nice saltiness to it that prevented the pasta from becoming too rich. 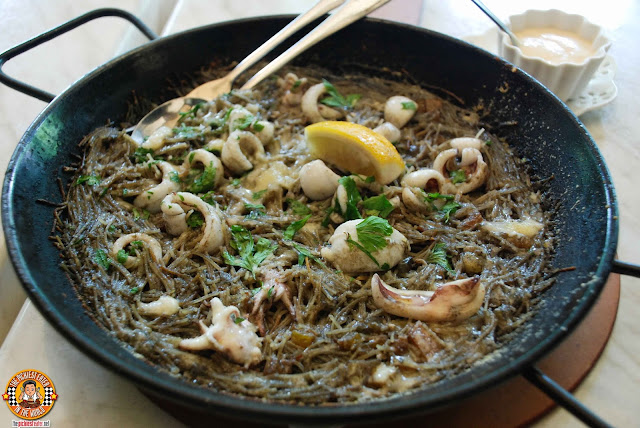 With the solitary exception of Calamari (from a select few places), my Pickiness kicks in whenever a squid dish is placed in front of me. The Squid Fideua (P425) was no exception. Funnily enough, this was to the delight of my companions, meaning more servings for them. The dish is made with thin Capellini Pasta in mixed into Squid Ink, then topped with Baby Squid and served with Garlic Aioli. Ms. Malou herself showed us that the paella is best appreciated when totally mixed into the entire paellera! 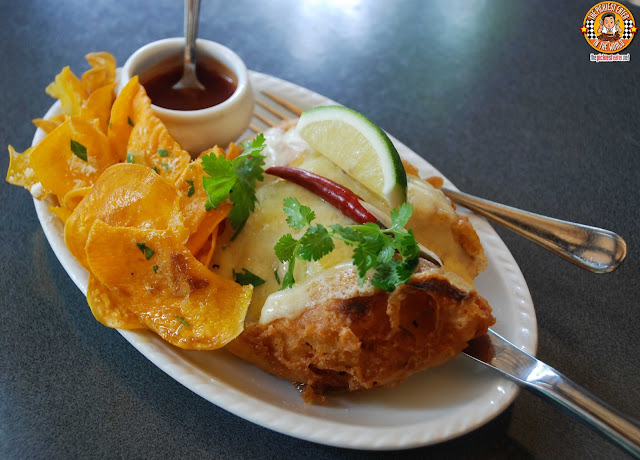 If you're like me and you're a dark meat kind of a guy when it comes to chicken, then you would most likely think of skipping Maddie's Chicken (P425) when you see it on CDP's menu. Well then I promise you that you'd be kicking yourself afterwards  because you'd be missing out on an amazing chicken dish! Yes, Maddie's Chicken uses Breast Fillet, but that fillet is coated into CDP's signature Beer Batter, and fried to beautiful golden crisp, all while maintaining the wonderful juiciness that you look for in a chicken dish. The fillet is stuffed with Farmers Ham and Gruyere Cheese, making it sort of like a Cordon Bleu.. One of my favorite Chicken dishes ever. Dipping the chicken meat into the side BBQ sauce adds a different dimension to the dish, keeping it from being too cloying.

And warning: the truffle kamote chips are highly addicting!
f 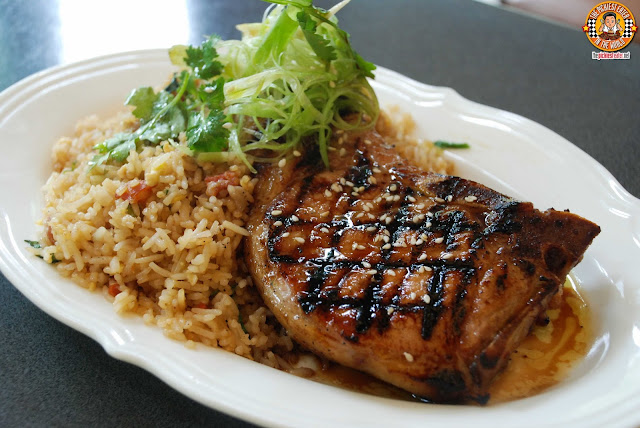 If CDP's Corned Pork Chop with Chili Garlic Fried Rice (P465) had a smidgen more fat to its meat, then I would consider this my favorite dish of the day. Though I admittedly found it a little lacking in the fat department, I would still put it into a tie with the Fish Tacos and the Pig Ears. That's how good this is.

Even just by looking at it, you could see how gorgeous the char marks across the exterior of the pork is. The lines are deep and dark, giving the meat an innate smokiness. The meat glistened in its own glaze, revealing an incredible juiciness to the chop.

The chili garlic fried rice adds another dimension of flavor to the meat, as the subtle punch of heat serves as a wonderful compliment, 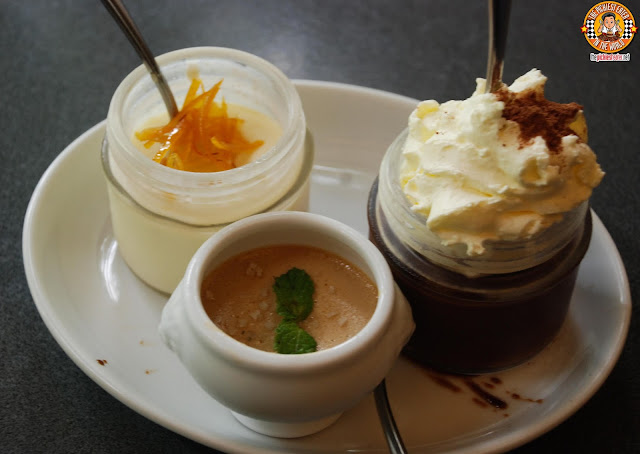 Though I was already a bit full from all the dishes we were served, my body figured out how to make a little extra space for dessert. The Triade (P455) is the closest thing CDP has to a "Sampler Platter", and it includes Saffron Panna Cotta, Red Wine Chocolate Pudding, and Salted Caramel Pot De Creme, all of which were amazing. 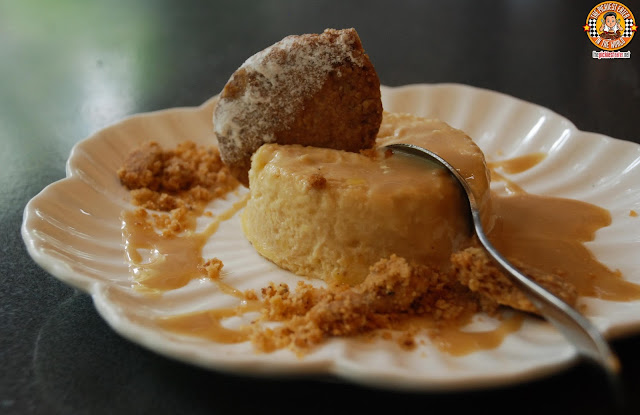 The Maple Marscapone Cheesecake (P345) was a wonderful mix of colliding flavors that worked harmoniously together. 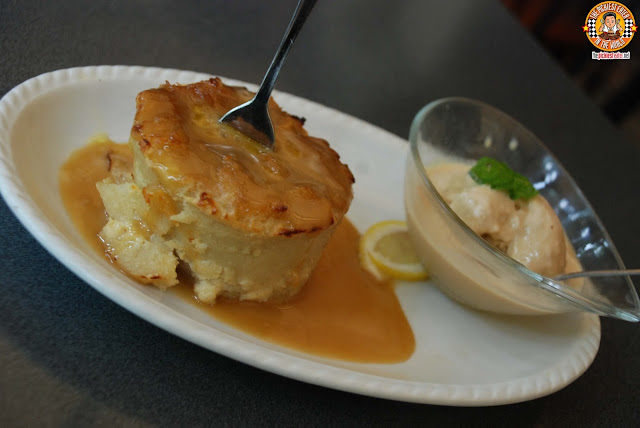 The Maple Bread Pudding (P275) found the right balance of sweetness to make you crave for it later on, and is best enjoyed with the Salted Caramel Gelati. 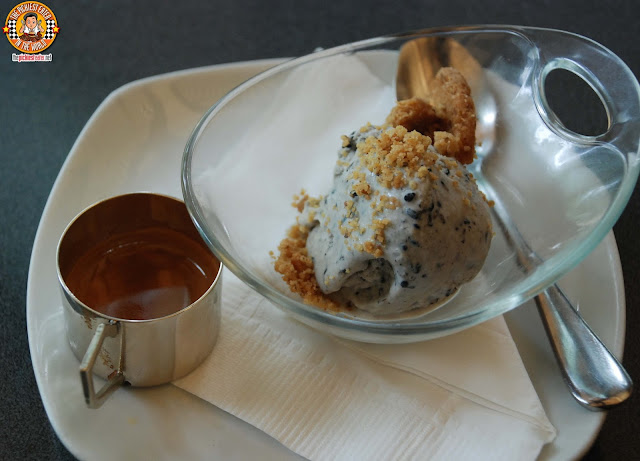 Since I'm not fond of Coffee, I gave my portion of the Affogato (P275)  to Rina, which she ended up loving. This unique dish is made by Fiore De Latte with black sesame seed gelato, espresso, cookie crumble 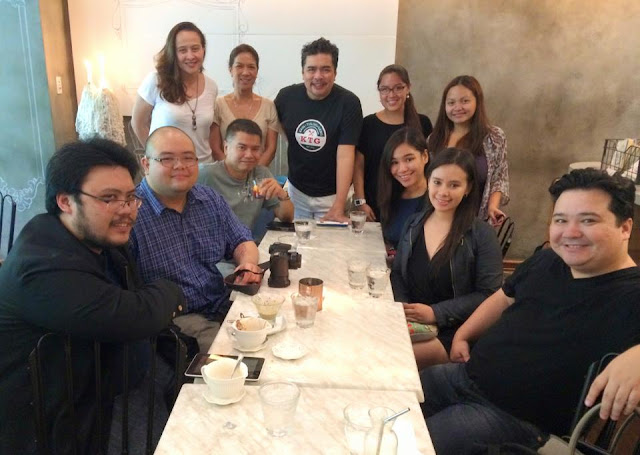 Nothing like an amazing meal filled with delicious food and good vibes all around! I truly enjoyed my meal at CDP Global Table, and will definitely go back to try the other dishes. The prices may seem daunting for some, but never truly goes too outrageous. I guarantee you that the quality of the food makes it totally worth it!

Posted by The Pickiest Eater at 12:31 AM

Email ThisBlogThis!Share to TwitterShare to FacebookShare to Pinterest
Labels: CDP Global Table, Rockwell, Where to Eat In Rockwell