This is my first post from my new home, www.thepickiesteater.net.
I'm gonna miss my old blogspot address (You'll still be re-directed),
but it was time to move on into some new digs..
I'm looking forward to making some major strides with this blog, so it was important that I make the move already..
still going to be the same level of pickiness though, I promise :) 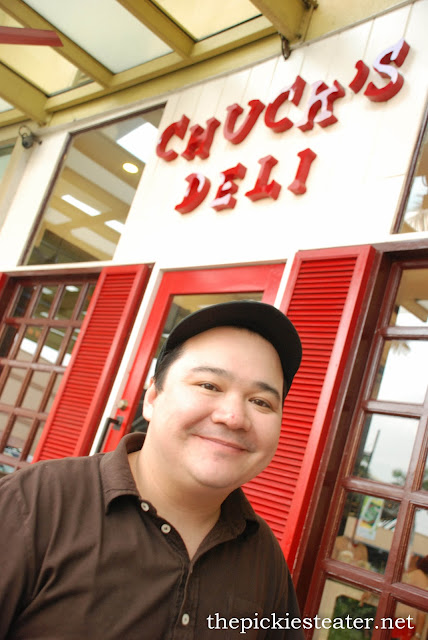 Getting ready to get all chuck'd up!

After our first trip to the doctor to get Rina's ultrasound, we passed by Market Market to do a little grocery shopping. I was contemplating going to Brother's Burger in High Street to do a review, (Which after going to the "older" Greenhills branch, I now wish I did) but i stopped in my tracks when I remembered a place I had read about a couple of weeks back, and was eager to try- Chuck's Deli.

Like virtually all red blooded males, I looooveee huge sandwiches, so when I heard about Chucks Deli opening up at Serendra with sandwiches so huge, they call them "SLABwiches",  I knew I had to see (and taste) them for myself!


So it was a sunny Thursday afternoon, when the three of us, (Me, Rina, and my baby still in my wife's tummy) had a late lunch all together for the first time as a family, at Chuck's Deli. 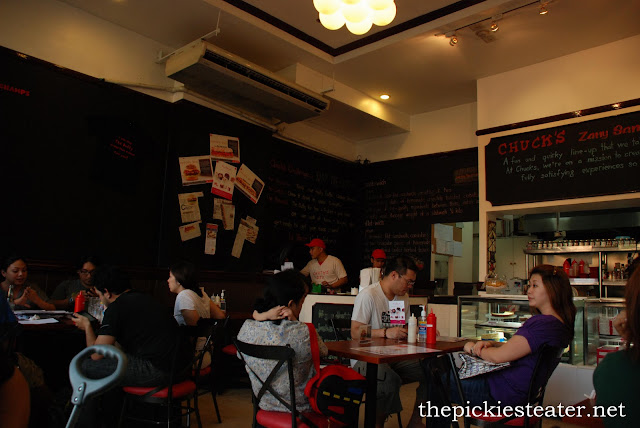 The yaya put the stroller directly behind my chair, limiting my ability to move.
See the handle on the bottom right?

Chuck's Deli occupies the same spot that "Healthy Kitchen" used to (I guess that's what happens to restaurants when they try to feed me a nutritious meal hehe). Though the area isn't very spacious, it's comfortable enough for a meeting, and cozy enough for a date (especially if your date has the appetite of a lumberjack.. my kind of woman). The design is simple, with chalk boards all around, giving out info about the place, like winners of their "Slay the Buffy" Challenge (finish an entire buffalo chicken sandwich under five minutes and get a free T-Shirt and your name on their wall), other items on their menu, and as well as other fun facts about Chuck's (They bake their own bread). 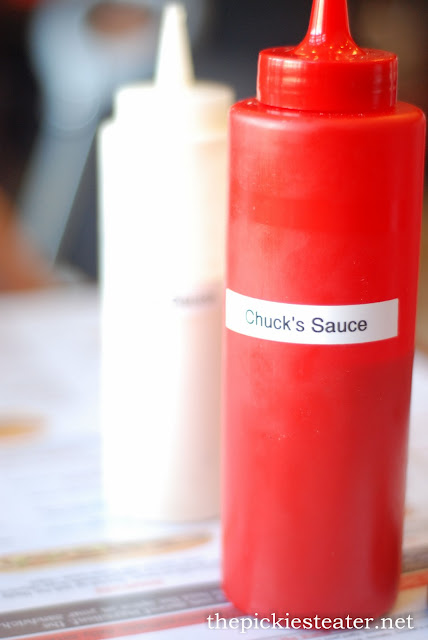 Good thing the "Chuck's Sauce" isn't the white one.

On our table, we found two squirt bottles, one marked Garlic Sauce, and the other, Chuck's Sauce. I dunno man.. I have no idea who Chuck is, but I'd be wary to try something in a bottle marked "Chuck's Sauce". Kidding aside, the garlic sauce and Chuck's sauce basically tasted like the sauces you have to choose from at shawarma places. (The garlic was white, and Chuck's was a bit orange-y, with a spicier kick) Though they were both good sauces, I didn't find anything truly outstanding about it. (Like I said in a previous post, if you're going to put your name on something and claim it, it better be kick ass.) 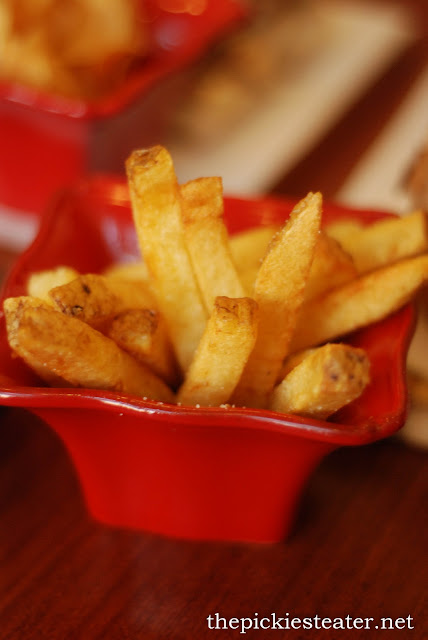 
I ordered the Double fried french fries (P85), hoping it would offer me something different. It did not. Again, it was simliar to the thick cut french fries that you get from NYFD, that I dislike so much. Sure, maybe it was crunchier a little bit, but it was not what I was expecting from french fries which claims to be "double fried". It tasted better with the Garlic sauce though, I must admit. 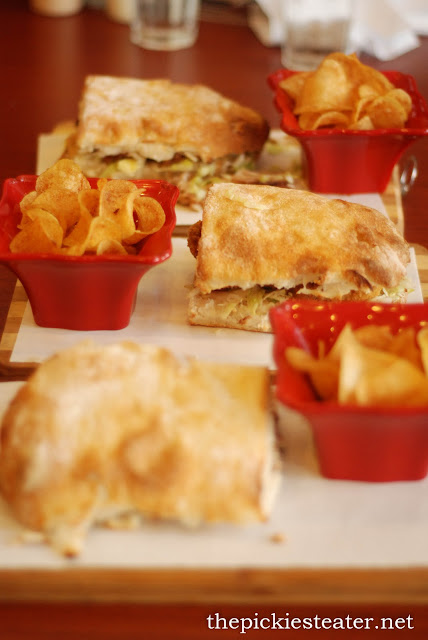 
Slabwiches are what all sandwiches want to be when they grow up. Just by the sheer size of it, you can't help but be impressed - especially when you realize that what you ordered was technically only HALF of it's original size. You see, A Slabwich is made on a TEN INCH loaf of Chuck's very own home made Ciabbatta bread (I'll get to that in a minute). If you can't handle a sandwich that big (you ought to grow a pair), Chuck's thoughtfully also offers a "Half Slab".

Chuck's Deli Menu has a very eclectic menu that will imeddiately catch any foodie's attention. Save for a few, the items have well thought up catchy names that fit their respective dishes. "Off The Hook" is a fish fillet Sandwich, "California Waki" is the crabstick sandwich.. you get the picture.

On a normal day, I would not have hesistated to order a whole slabwich, but since I was planning to order more than one (despite appearances, i only have a finite amount of stomach space), and not to mention I just found we're going to be having a baby, so I'm on a tighter budget, I settled for half slabs of three different variants to be tried by Rina and I. 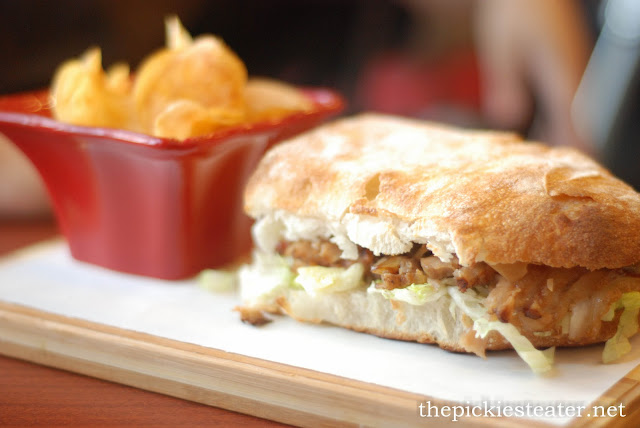 I hate writing when i'm hungry.

First off, let me say that the home made potato chips that the Slabwiches came with were delicious.You have an option to "upgrade" it to fries.. I strongly suggest you do not. I also loved how the sandwiches were served on wooden slabs, instead of on plates.

The beauty of the Slabwich begins with its bread. I'm a firm believer that the bread of a sandwich can make our break it, and their Ciabatta bread knocked it out of the park.(I'll expound later) 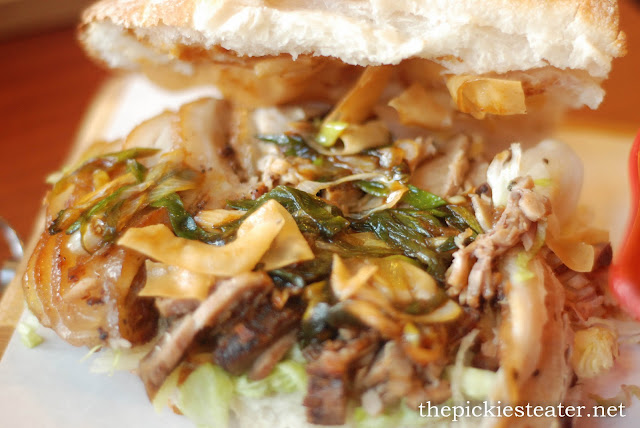 A fake so good, i'm surprised they didn't get it in Greenhills.

The first Slabwich I ordered was the Faking Duck (P185). Admittedly, it was the witty name that got me interested. It is strips of roasted pork cooked in Hoisin sauce, mixed with leeks, lettuce, and crispy wanton noodles to boot! Being a lover of Peking Duck This Slabwich totally worked for me (If they couldn't use duck, roast pork would be the next best thing!), but I couldn't help but imagine how good this would have been if they used actual duck, complete with the crispy skin (Drooling just thinking about it) 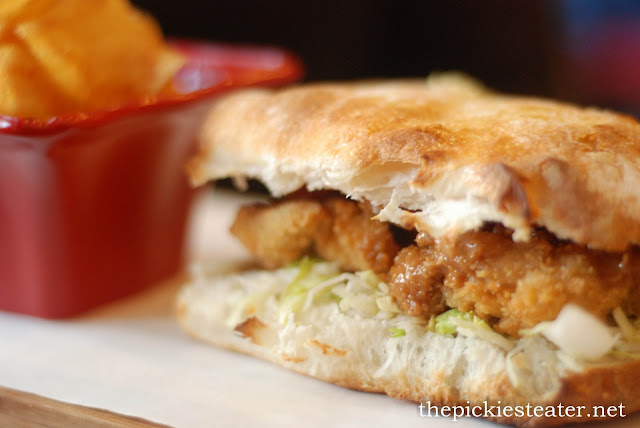 
Rina was interested in the "Chuckatsu" (P255) which was a deep fried chicken fillet sandwich, with added tonkatsu sauce and bacon. This was a delciously fried piece of chicken, with a very moist center. However, I wasn't too fond of the Tonkatsu sauce so much. But to be honest, I don't think that's Chuck's fault, because I'm not too fond of Tonkatsu sauce in general. I would have preferred a Teriyaki sauce, but of course they would have had to change the name to something like "Chicken TeriChucky" (sounds forced, and not as funny). 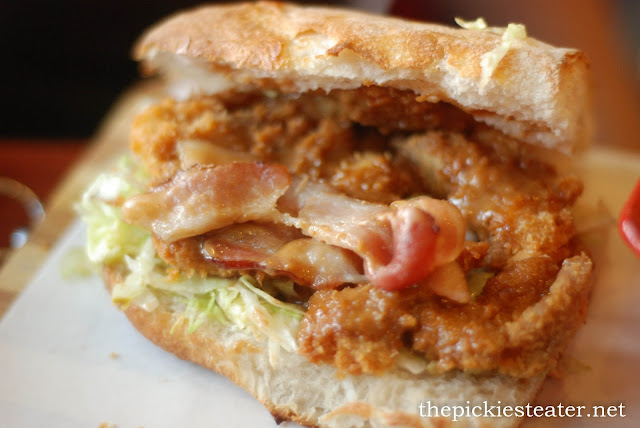 You call that bacon?

Tonkatsu sauce aside, my only real qualm with the Chuckatsu was the bacon. If you're going to slap on just a half a strip of bacon unto a sandwich, don't brag about it. That one strip barely even covered the entire HALF slab (Sorry, I take my bacon seriously). 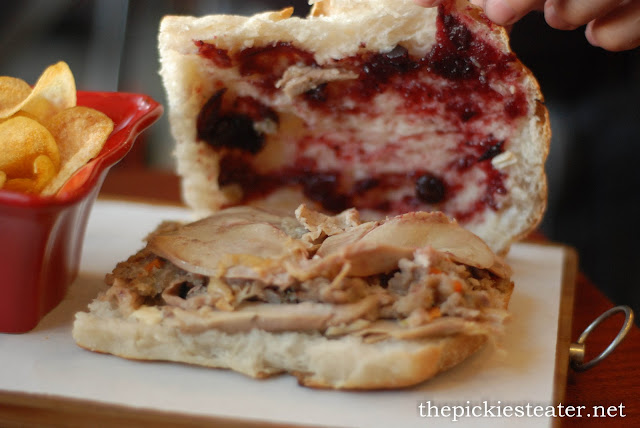 Just like the first meal shared by the Indians and the Cowboys. I mean, Pilgrims.

For our third sandwich, I went with The Pilgrim (P255), because it had been awhile since I've had a good turkey sandwich. Good thing I remembered to tell the waiter to make sure that they only use dark meat (You're allowed to specified), although I do believe the waiter should take the initiative and be the one to ask. The roasted turkey slices were cooked wonderfully, and the cranberry jam added a sweet touch to the sandwich. Perhaps the only thing I didn't enjoy as much was the stuffing. Though it was good, it was one of those things that you easily get sick of after a few bites. (Been struggling to find a translation for "nakaka-umay".. Thanks Audrey, Rain and Sandra!) 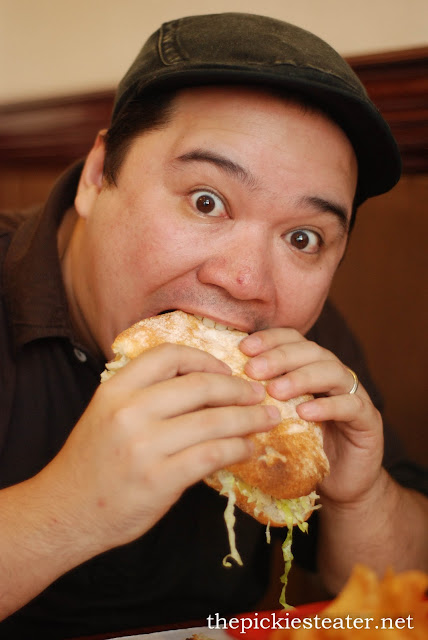 I have in my hand, HALF a sandwich, believe it or not.


Ok I want to go back to the bread, because that's what I was most impressed with. The Ciabatta bread had wonderfully light crunch on it's outer crust, while the inside was beautifully soft. What made the Slabwiches really fun to eat, was how the bread didn't fall apart when you lifted it up - And it was pretty much fully loaded, too! The top and bottom crust was hard enough to hold the the sandwich together, but since the inside was so soft, the bread virtually encased all the contents of the sandwich keeping  all your meat stuffed inside, safe and sound. (Hey, anything that helps me keep food off my shirt is ok in my book!)

I have only actually skimmed the surface of what Chuck's Deli has to offer. I haven't even touched on their "Subwiches" yet, nor their "Grounds & Pounders" aka Their Burgers! Which leaves me looking forward to my return in the very near future!

My first rule in grocery shopping (which incidentally happens to be one of my favorite past times), is to never go when I'm hungry. Many a time, my grocery bill has doubled when I do, because I end up buying all these meats and other canned goods that gets left in my freezer or cupboard for months.

This day was actually a really long day for both of us, because we started  by waking up at 4:30 am, just to make it to the NBI satellite office in Marikina by 6am, just to get our clearance for travel. Speaking of which, I have to say, good job to the staff of NBI Marikina for their efficiency. We got there at 6am, and we were already wait listed at #156 (according to the guard, people start to line up as early as 3am)! The office opened up at 8am, but we were done by 10am. Despite the large amount of people, the process was relatively fast and orderly, and allowed us to get to the doctor by 11am.

Funnily enough, when we were waiting for our NBI clearance, Rina mentioned to me that she wanted to do a "baby blow up". I was like, "Huh?" And she goes, "You know, take cute pictures with our baby!". "Oooohhh you mean Blow Up Babies!" We both got a laugh out of it.


In a funny twist of fate, as we walked into Chucks Deli, who do we see in nearest table? The creative minds behind Blow Up Babies! 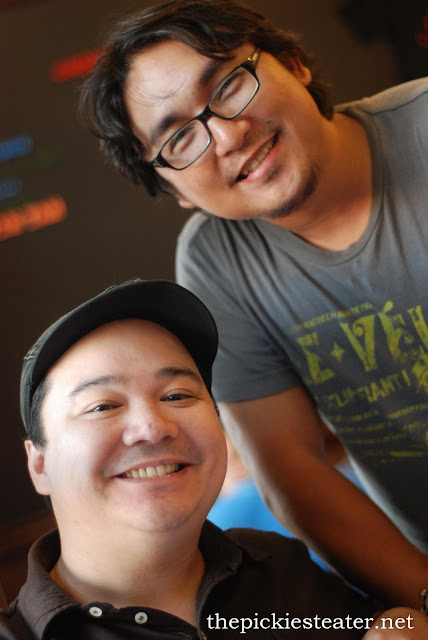 My buddy J.A. Tadena, a Director/Cinematographer/Photographer, who I first worked with during the movie "Prosti", was sitting across the table from me together with the rest of the Blow Up Babies team, brainstorming exciting new ideas for the upcoming year. 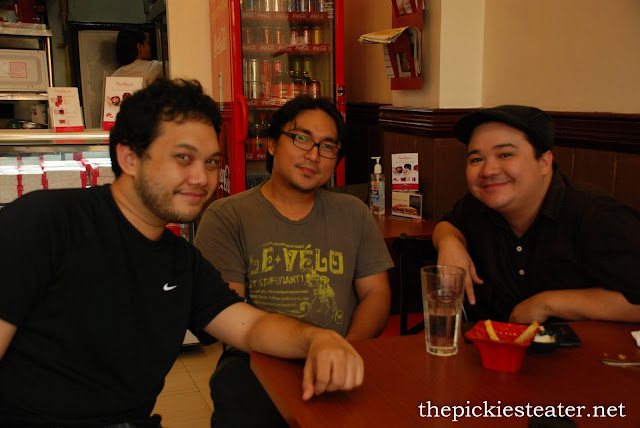 Director/Rock Star Quark Henares, J.A. and The Pickiest Eater In The World 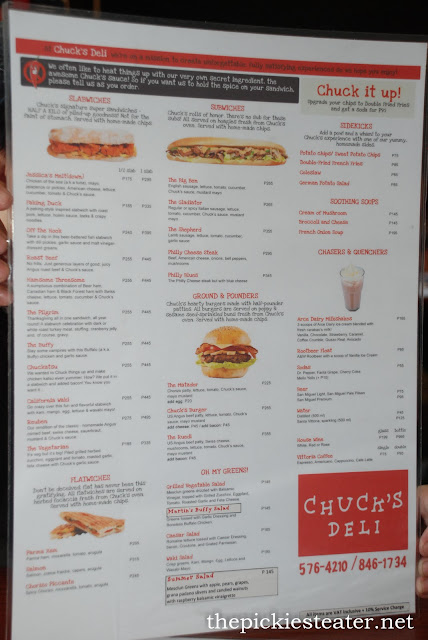