For the long weekend last August, I planned a trip to a resort in Cavite for Rina and I. However, due to the unpredictable weather, my mom thought it wouldn't be the best idea for Rina to go on a long road trip (She's on her 8th month of pregnancy!). Given her expertise in the use of a rubber slipper in lieu of a shuriken, I have accepted the fact that I should never EVER argue with my mother, so we decided not to risk it. I still did want to take Rina somewhere a bit further than our usual Greenbelt-Eastwood routine, so we headed off to Solenad, Nuvali in Sta. Rosa, Laguna.

I had heard about about a restaurant there that Bikers would frequent during their rides, called "Nature Trails". After making sure that it wasn't a Vegan place that exclusively sold Granola Bars and Tofu for lunch, Rina and I decided it give it a go. 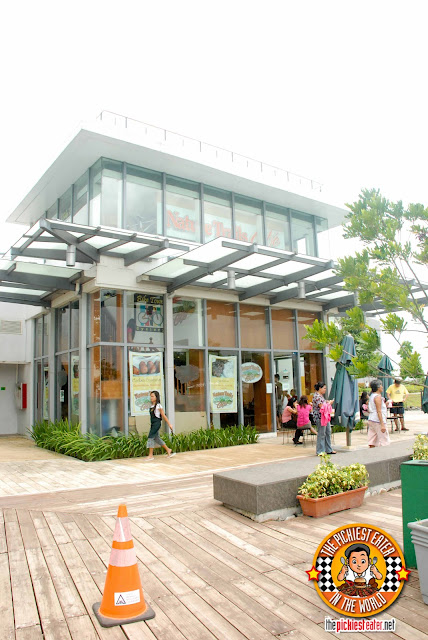 Since it's located in Laguna, it still definitely falls under the "Out of Town" category, but since it was a holiday, It wasn't traffic so our car ride wouldn't exactly be a very long trek. In fact, I've had car rides to Makati that took longer than our one hour and ten minute trip. We hadn't been to Solenad since our visit to Pig Out last year with My Father in Law, Chaikka, and Don, and Rina had been raring to go back for awhile now.

I had Rina go down at the first drop off point we passed by while I went to park the car. She asked me where exactly in Solenad was nature trails located. I wasn't exactly sure myself, so I just told her, "Look for the restaurant with the most bicycles around it". Lo and behold, that's EXACTLY how she spotted Nature Trails. 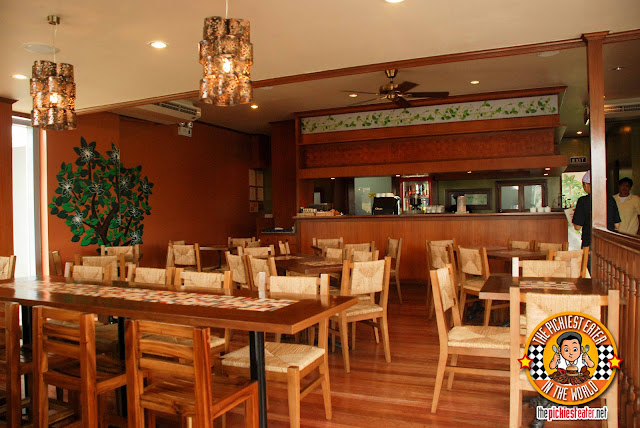 The beautiful wooden interiors of Nature Trails gives the restaurant a rustic, almost "Log Cabin" like feel to it.  It has a very comfortable, "homey" vibe to it (not the hip hop kind, either), that was only enhanced by the very friendly staff, that go out of their way to cater to your every need (The waitress saw me tweeting from my phone and came up to me to give me their wifi password). 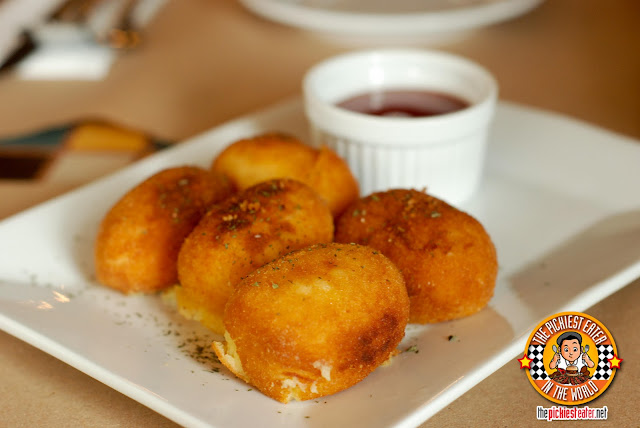 Rina and I couldn't decide between The Chicken Croquetas (P120) or the Mozarella Sticks for our appetizers, so we decided to order both and decide later who chose the better one. The Chicken Croquetas  were actually really good,with the croquette itself fried to beautiful golden color and filled with plenty of shredded chicken and mashed potato and just a dash of pepper. It honestly tasted quite similar to what my mom makes (which isn't a knock on Nature Trails cooking by the way). You have to understand, in my family, cooking is such a big part of my family's tradition,there's actually an entire restaurant that recently opened in honor of our recipes. (So when I say that a restaurant dish tastes like something my mom makes, it's actually a compliment).


Perhaps the my only comment would be, I wish they had a more interesting sauce, apart from ketchup (although admittedly, it does go well with it). Perhaps a Bechamel or aioli would've been my preference. 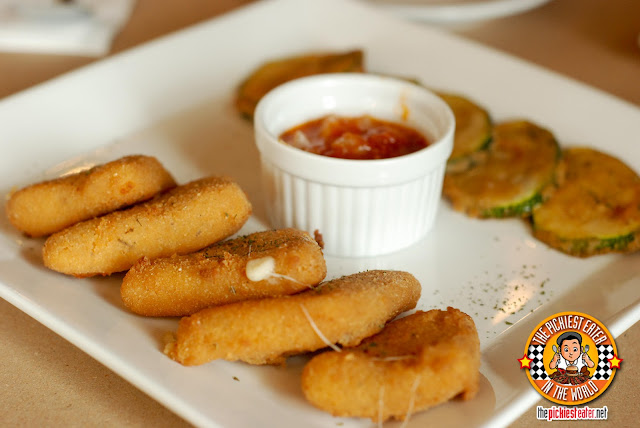 The Mozzarella Sticks (P120), were actually Mozzarella Triangles, that came with a few slices of lightly breaded fried zucchini, and a salsa dip. Although the concept wasn't anything out of the ordinary, I actually really enjoyed it more than the Croquetas (Rina had a smug "I told you so" smile on her face when I said that) . 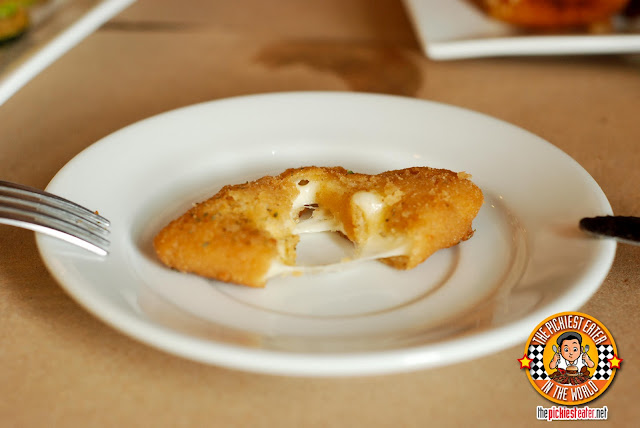 The triangle was bursting with Mozzarella cheese and was hold together really nicely by the coating, which wasn't too heavy either. This was the first time I've seen zucchini slices served with Mozzarella sticks, but since it was fried and breaded, I decided to give it a whirl. Since I'm not very big on vegetables, to my memory, this was the first time I'd be knowingly trying Zucchini.. and to my surprise, I really liked it! I placed the Mozzarella stick on in and it went perfectly together. The Zucchini let out a light delicious sweetness that really caught me off guard.


I played it cool with Rina, but when there was only two zucchini slices left and no Mozarella sticks, she asked the waitress to bus out, and got the shock of her life. I told the waitress "Wait please", and placed the zucchini slices unto my plate. She was staring at me with her big eyes open wider than I had ever seen them before.


She looked at me with a completely baffled gaze and said, "Who are you?". 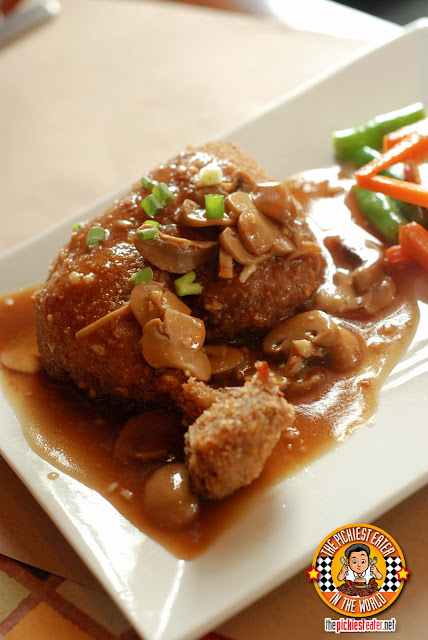 I ordered  the Baked Fried Chicken (P240) for Rina, and by the look on her face when the waitress placed it down on the table, I thought I had ordered the right dish for her. Even just by looking it, you could tell that the skin was going to be amazingly crispy. Tearing into it revealed the meat to be tender and juicy. Now, a dish such as baked fried chicken, you would expect it to have some sort of gravy as a side dish, right? Well, this one did have a sauce to it. but it wasn't gravy at all.


Whatever it that sauce was, it totally ruined the dish for me and Rina. It had too much acid in it, making the sauce too sour for it to be a gravy, as it totally overpowered any semblance of taste the chicken might have given. I regret not asking them if that was the taste that they were actually going for, or if they overdid something, or if- god forbid- it was a little spoiled (I'm still alive, so I don't think it was).


Too bad really, because the chicken itself was delicious. If you ever order this, I strongly suggest you have them place the sauce on the side. 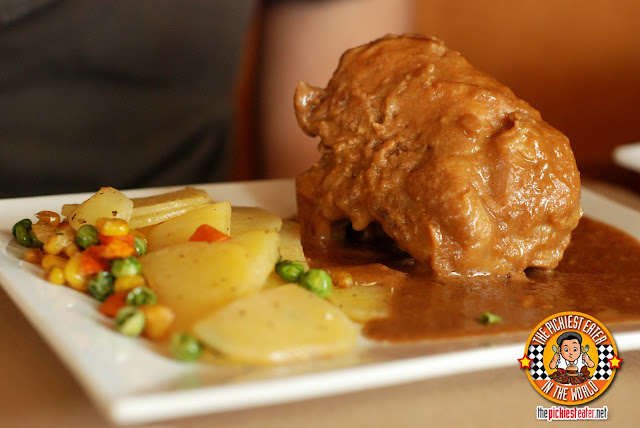 I ordered the Pork Spare Ribs in Peanut Sauce (P240). It may not have been the prettiest thing in the world, but it did help me get the taste of the chicken sauce out of my mouth. The pork was cooked very well, making it rather easy to rip into it. I was half expecting more fat to it, but they used a leaner cut, yet the meat wasn't dry at all. The peanut sauce gave the meat a subtle hint of sweetness that served as an enhancement to its flavor. 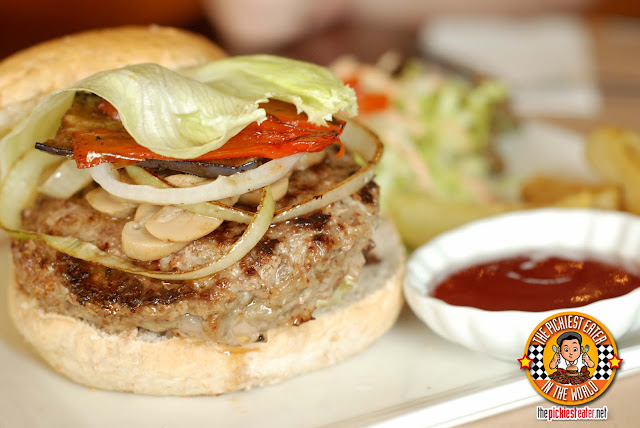 Its not every day that I go to Laguna, so don't judge me for wanting to try Nature Trails' Nature Burger (P220) while I was there. The Nature Burger, is an all beef burger patty topped with grilled peppers, eggplants, mushrooms and caramelized onions. There was supposed to be Mozzarella cheese on it, but as you can see in the picture, they seemed to have forgotten to put it (or if it was there somewhere, it wasn't enough) It was honestly just alright for me. The toppings were actually quite delicious, but I wasn't a big fan of the beef patty. Though it was thick, it seemed like a house burger, and not something I'd expect from a restaurant. Don't get me wrong, It was a decent tasting burger, but as a burger lover, I can safely say that I've had way better.


All in all, I can safely say that if you put aside my disappointment with the Baked Fried Chicken, Rina and I had a nice time, especially with the pleasant service and the ambiance. And hey, Nature Trails got me eating my zucchini for the first time, so kudos to them for that! 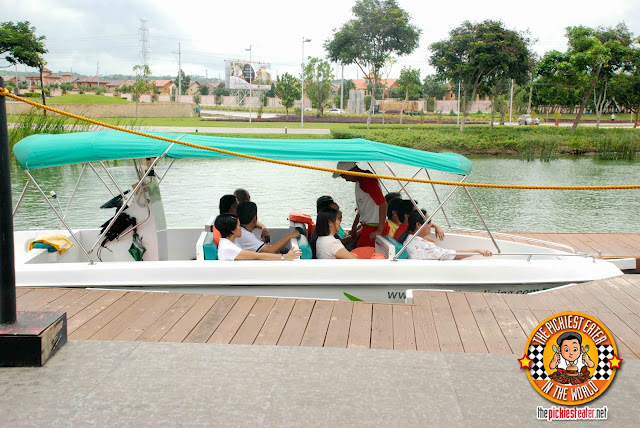 Solenad, Nuvali is really a lovely place to go to - especially when it's not too full. Immediately after lunch, Rina went straight to feed the fishes, and watch people go absolutely nuts while riding the boats around the pond. It was funny watching people going "sight seeing" in the boat, especially considering that they saw those same "sights" on the drive into the parking lot. It isn't a very long ride, and you don't see very much, but who am I to say what's fun for someone else, right? 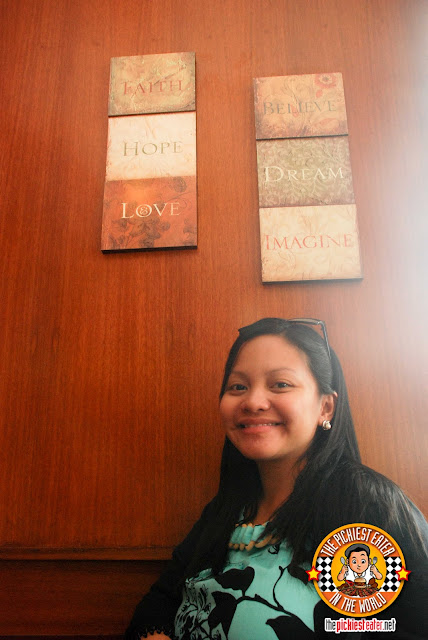 Words, me and my wife live by.
Posted by The Pickiest Eater at 12:13 PM