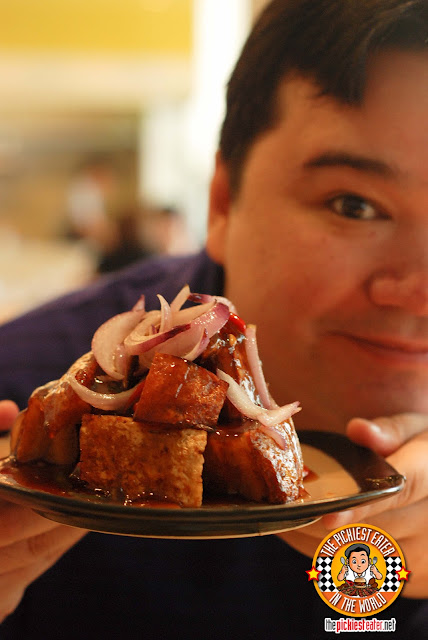 I've said it before and I'll say it again.. "The Pickiest Eater" is actually a collaboration of two people: Me and my wife Rina. We both love eating, but she handles all the photography, while I take care of the words. She loves going to these adventures together, and leaves the selection of where and what to eat all to me. During our last trip together at Nature Trails, I ordered her the Baked Fried Chicken, which she wasn't a fan of. I promised I would make it up to her on our next adventure.


You have to understand that I take these food trips with Rina very seriously. I take pride in being able to study a  restaurant's menu, and figuring out which dish sounds the best for me (I often get calls in the middle of the day from friends saying "I'm here at *Name of Restaurant* what should I order?"). I really wanted to redeem myself for ordering that dish that she didn't like, so I decided to break out the big guns.


On our way home from Nature Trails, I told Rina, "Next time we go out, I'm taking you to Zong".

I had never actually been to Zong, but I knew of it's reputation. Their head chef, Chef Onno is supposed to be a legend in the art of the oriental cuisine. One day, as I visited the Groupon Philippines website as I religiously do, I saw a deal listed for Zong. It was P1,200 worth of food, for only P600 bucks! There was a little voice inside my head telling me to go purchase the deal.. But then, I remembered promising Rina that I would be a little bit more frugal with my spending, because we were going to have a baby. I was thinking.. Since I'm saving a whopping P600 bucks, shouldn't that be considered being "frugal"? I'd spend around P1200 when I go there anyway! 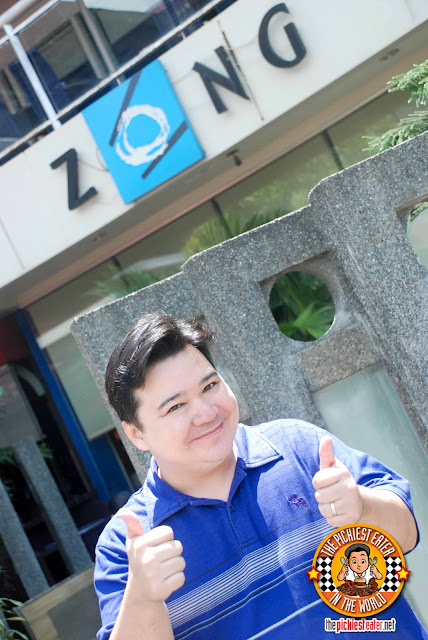 So there I was, waiting for a sign, when I got a Facebook message from Kathi of Groupon Philippines, asking for my email address  because they wanted to send me something on behalf of the company. I was touched to find out that their clients that I had written about really appreciated my posts. I honestly thought they were going to send me a thank you letter or something. So I gave her my email address and my cellphone number just in case, and told her that I was on the verge of purchasing the Zong deal. After sending the message, my officemate Chi tells me, "Rich, there's a deal for Zong on Groupon!" I took that as a sign as well, but not yet a definitive one.

Seconds later, my cell phone rang. It was a number that I didn't recognize (which, because of my job, I'm used to getting). So I answered it, and it turned out to be Cedric from Groupon! As a small token of their appreciation, they were giving me one voucher for the Zong deal! I tried to pretend to protest a little, but I was really ecstatic to realize that the little voice in my head telling me to get the deal was actually Kathi! How's THAT for a sign?! 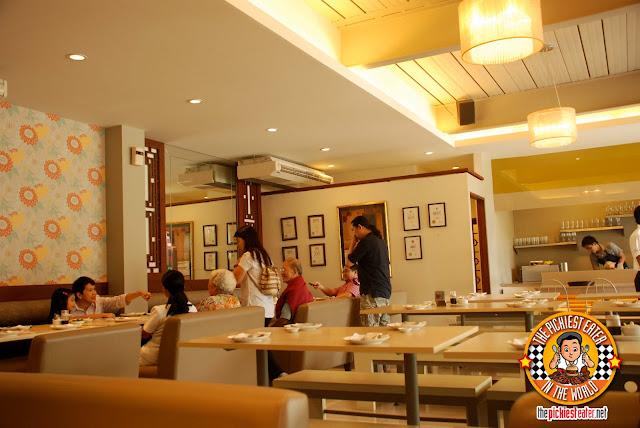 As Rina and I walked in to Zong at The Fort, I was surprised to see it looked more like the traditional style Chinese restaurant than an ultra modern design, as their logo suggested to me. I found their wallpaper to be so dainty looking, I could imagine it in someone's kitchen. I loved how the huge picture windows let the sunlight into the room and gave it a clean feel to it. My personal suggestion to Zong (and ALL restaurants, in fact) is, never downplay the importance of backrests on your diners' chairs. As a frequent diner, there never fails to be that one moment for me where i'm so stuffed, I can't help but slouch in my chair for a better position for my respiratory system (I have a bad habit of overeating). The center tables of Zong uses benches as their chairs. Considering the amount of food I intended to order, I didn't want to risk toppling over to the floor, in an effort to find the right position for my belly. 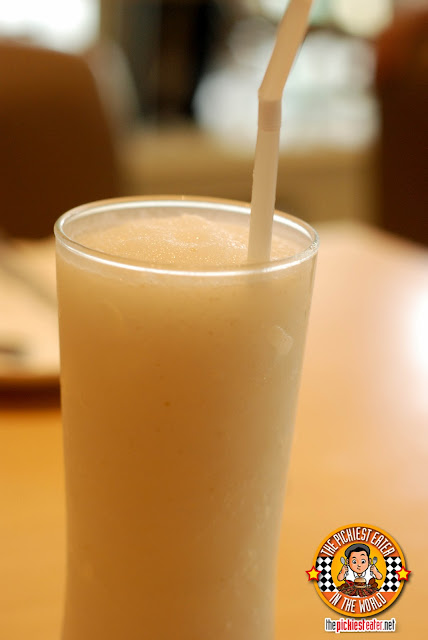 Naturally, Rina ordered a fruit shake with her meal. This time her choice was Buko. She said it was pretty much your standard issue Buko shake. Delicious, especially considering it was a scorching Sunday morning. 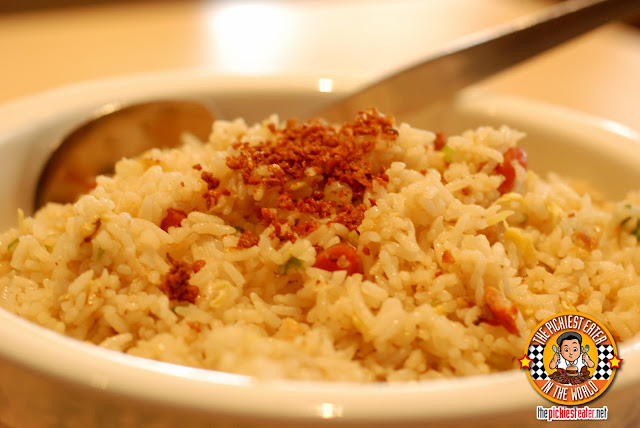 I was impressed with the speed in which the food arrived in. Rina and I barely got our conversation going when the waiter stepped in with three of our four orders already. He laid down the first dish on, the Yang Chow fried rice, and based on the smell alone, you could tell it was going to be amazing. I had a short debate with Rina, because I wanted to change things up a bit from our usual orders and order Salted Fish Fried Rice, but she gave me that puppy dawg look she always does when she's too shy to disagree with me, but said "Yes" anyway, so I knew deep down she wanted Yang Chow. In the end, I'm glad she (silently) protested because of two things:

1) This was easily among the best Yang Chow Fried Rice I ever tasted
2) With everything I ordered, adding Salted Fish Fried Rice could clash with all the flavors and I wouldn't appreciate each dish.

The rice itself was lightly sticky and had enough elements in it to make it a meal in itself (Well,maybe with a tad bit more Chinese Chorizo). 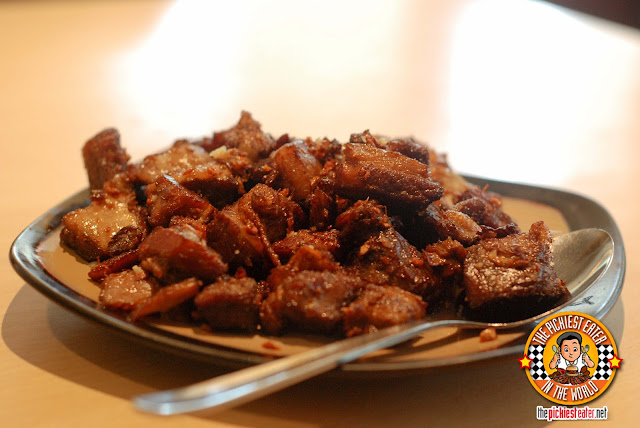 When I studied the Menu of Zong (even before going to the restaurant..I'm diligent like that), I told myself that I had no plans of going to a Chinese restaurant and ordering Beef Tapa. However, practically everything I've read about Zong said that their Beef Tapa is a MUST. Since I was adamant about not ordering too many pork dishes (my top three choices were pork) I figured that if i'd be eating beef, I might as well go for their signature dish.

This really wasn't the kind of tapa you'd eat at your neighborhood Tapsilugan. Oh hell naw. This was little drops of heaven in the form of beef cubes whose exterior had the lightest touch of crispiness giving you the impression it was deep fried, yet somehow managed to leave the meat immaculately tender. I just loved how the meat had little linings of fat on it is well. The tapa was cooked sort of like in the style of "Salt and Pepper Pork Spare Ribs", so there were little bits of chili peppers in it, that added a tiny spicy kick to it, but nothing I couldn't handle.

If you're getting hungry reading this, imagine how I feel, writing it. 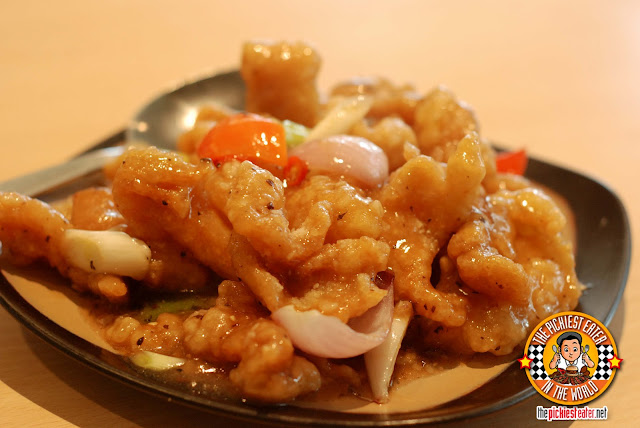 Whenever we go to a Chinese restaurant, Rina always orders "Spare Ribs With Tausi", but since I already knew what Pork Dish I wanted, I decided to go with the Crispy Tausi Chicken instead. Again, this really along the lines of my taste. The chicken fillet strips were fried to a beautiful golden color, and the thick tausi sauce was an amazing coating to it. The tinge of saltiness of the black bean melded perfectly with the medley of veggies that were in it, and really enhanced the flavor of the chicken.


Rina liked it as well, but she wasn't enthusiastic about it as I was. She felt that she wasn't sure where the flour coating ended and the chicken began. I didn't mind that too much though.. (Besides I think she was just annoyed it wasn't spare ribs with tausi) 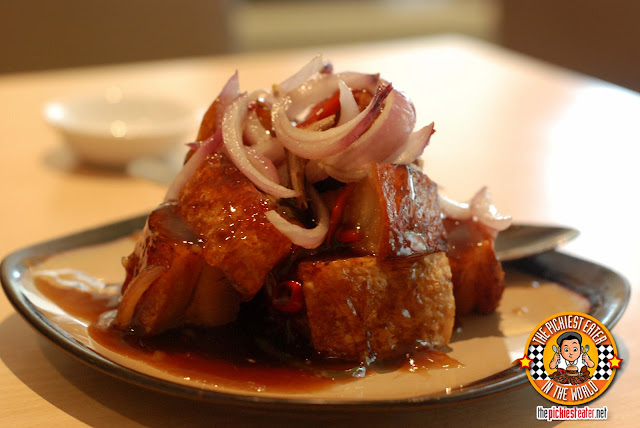 As you can imagine, I struggled to decide what Pork dish I wanted to try. I was debating between trying out their takes on classic dishes, such as their Sweet & Sour Pork or their Deep Fried Salt and Pepper Pork Ribs. But since this was my first time at Zong, I decided to go for a dish that I felt would have the "Wow" factor - and that was the Caramelized Porkloin. If the lord almighty was a chef and had to conceptualize a dish that was perfect for me, I think this would be EXACTLY it. They might as well have called this dish, "RichieZ's Food". You see, in case I haven't mentioned this before (I have, tons of times) I'm a big fan of meat dishes that are on the sweeter side of the culinary table, so if you're the kind of person that can grab a fatty porkloin and cook it in a caramelized sauce, then it means you could very well be my new BFF.


I think this could very well be the first time i'm saying this in my entire life but.. I found the pork a bit too fatty (*hides in shame*). That's ok though, because I'd rather be in the position where I need to trim excess fat from my meat rather than rummage through a plate looking for it. Needless to say, the pork was incredibly soft and the fat would melt in your mouth. Through it all though, the pork rind had a soft crunchiness to it, not unlike "Lechon Kawali". The sauce had a little bit of red chili's in it, which helped the sweetness of the sauce from becoming too overwhelming. I think it would have been better if they topped it off with caramelized onions instead of just raw onion, because you already have the Chilis in the sauce for that subtle spicy punch (But that's just me). 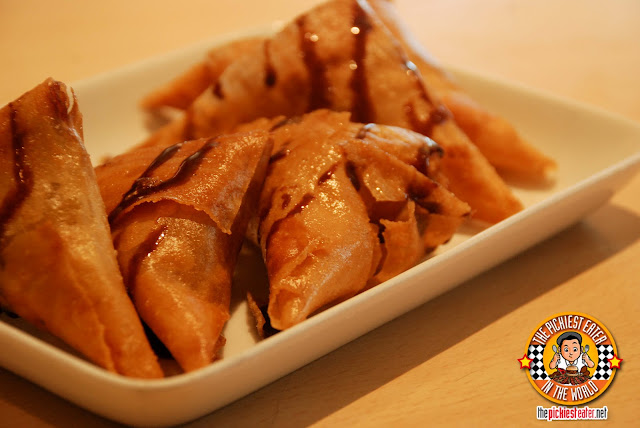 You wouldn't think that after everything we ordered, we'd still have room for dessert, right? WRONG. Word of advice: When you see something like "Banana fritters with Honey Glaze" on the menu, you order it. You don't ask questions, you don't fidget around to see if you have room in your tummy, you just order it. Rina ate big portions of everything you saw above with a four pound baby in her belly, so no excuses will be accepted about your stomach being "too full" (And that's why I married her by the way). Boo frickin' hoo. You just order it.

Otherwise you'd be missing out on an amazing dessert!


The crispy honey glazed wanton wrapper housed an amazing banana mash, that wasn't too sweet, and a fantastic way to end your meal. I could only imagine how awesome this would be with a scoop of vanilla ice cream.


Perhaps the only hiccup in the service came during dessert. Our waiter simply plopped the fritters down on the table and left, not realizing that our old plates and utensils were already bused out. Though I don't mind using my hands to eat the fritters, I really do think Rina and I each needed a dessert plate. Small comment, I know, but that's something that shouldn't happen to a restaurant in the caliber of Zong.


Other than that, Zong easily vaulted itself to one up the standings of my favorite restaurants!

Thank you so much Groupon Philippines!

Posted by The Pickiest Eater at 11:45 AM