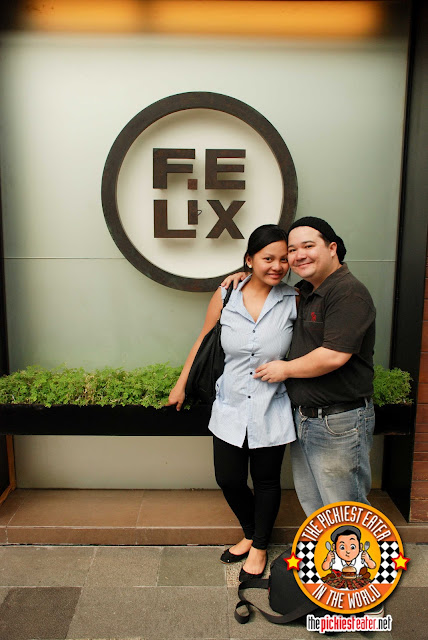 Convincing Rina to leave the house without Baby Rain is next to impossible. But I can't blame her either. Rain is still just one month and five days old, and we're both first time parents, so even a trip to the bathroom that takes longer than it should can induce the feeling of panic. But even when Rain was still a little speck in her mommy's tummy, Rina was already making plans on who would take care of our daughter on the weekend of November 20.

Why? Because Breaking Dawn Part 1 would be showing that weekend.

I'm not ashamed to admit that I've read all the Twilight Books, and save for the first one, I actually enjoyed them. The movies, on the other hand, are another story. But Rina and her sister Chaikka are crazy over both, and both were asking me to reserve tickets for "Breaking Dawn" as early as the closing credits of the midnight screen of "Eclipse" in 2010.

I bought a voucher from CashCashPinoy to the restaurant, "Felix" in Greenbelt 5 a couple of months back, hoping to use it during one of our movie trips. (After a few experiences in different cinemas, we resolved that, with its online reservation and forgive me for a lack of a better term but its "Classier" crowd, Greenbelt 3 Cinemas would always be our default choice when wanting to watch a movie).

So since everything just seemed to be timed so perfectly, Rina finally got to go on her date with Edward, Jacob, and Felix. 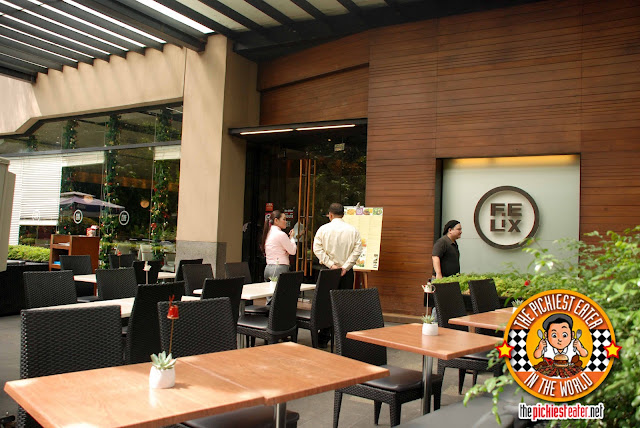 Felix is tucked away in a portion of Greenbelt Five that I have never passed by before. You walk past the outdoor stairs near the church, and you'll discover a whole row of snazzy restaurants. I lived three blocks away for two years and only saw that area last weekend (My teacher always said I was bad at paying attention). 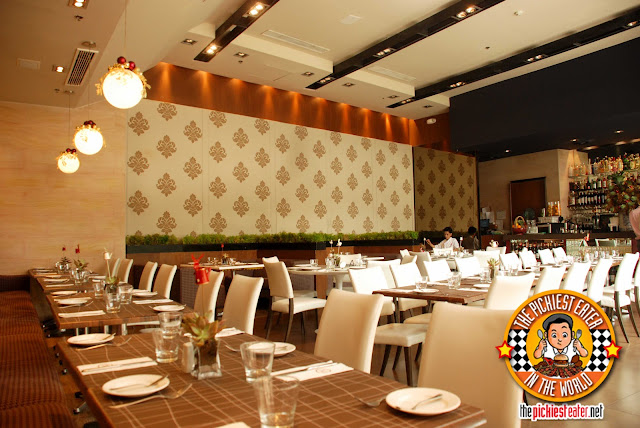 The interiors of Felix exudes elegance and class without being too stiff. The staff is really well trained, and it was evident that customer comfort and satisfaction are their primary concerns. 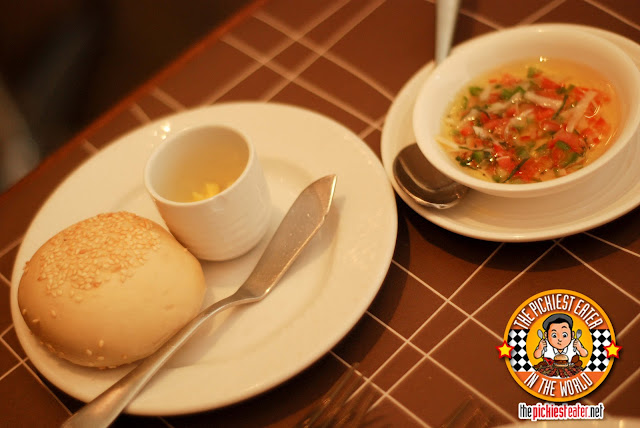 We were the first ones in the restaurant (as usual), so the kitchen wasn't prepared yet. Our waiter told us that we would have our bread rolls brought to our table, but it may take awhile longer than usual because they didn't want to serve it unless it was heated at the right temperature. Like restaurants such as Italianni's and Buenesimo, Felix offers complimentary bread rolls for each patron. However, unlike Italianni's and Buenissimo, Felix serves their rolls with not just with a balsamic vinegar sauce, but with some sort of a salsa bathed in olive oil. The salsa also had streaks of a sharp cheese in it for added flavor. 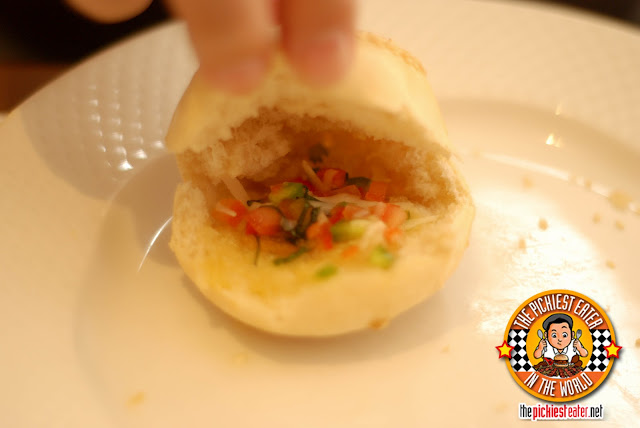 Slicing into the roll revealed a steaming hot white bread that virtually liquefied the butter upon its touch. I placed the "salsa" on the bread to make a little sandwich, and I must say, though I'm not too big on tomatoes, I enjoyed this very much. The flavor of tomatoes and spring onions just popped in your mouth and fused nicely with the buttered bread. If I were to nitpick anything, it's that the amount of butter they give you is ridiculously little. I don't mind if you don't shape it into a little star for me. Leave a whole bar if you want, I don't mind. But then again, it was easy for us to just ask for more butter from the waiter, so it's no big deal. 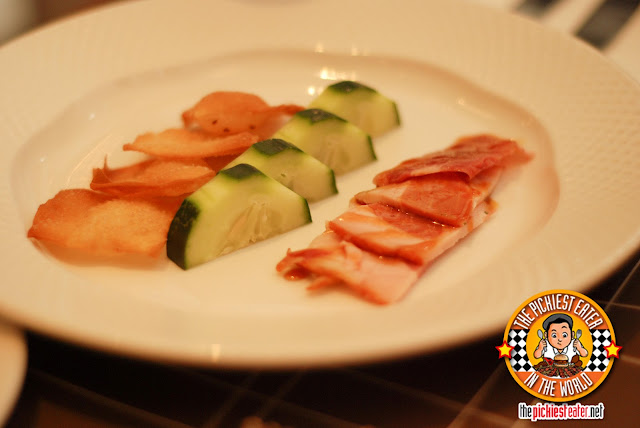 I ordered their Guangzhou (P220) for Rina and I as our appetizer. The Guangzhou consists of Four components - Chinese Ham, Crispy Bean Curd, a raw Cucumber and a soft "Pao". 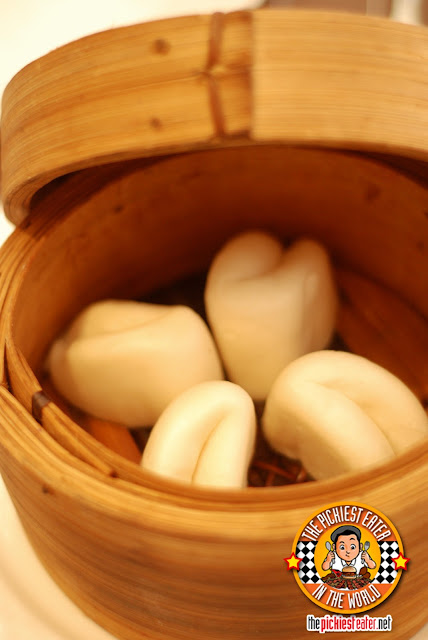 The Pao was baked masterfully, and was soft to the touch, and had a subtle hint of sweetness to it. Spreading the Pao apart let out a light smoke of steam, and proved to be the perfect bed for the ham. 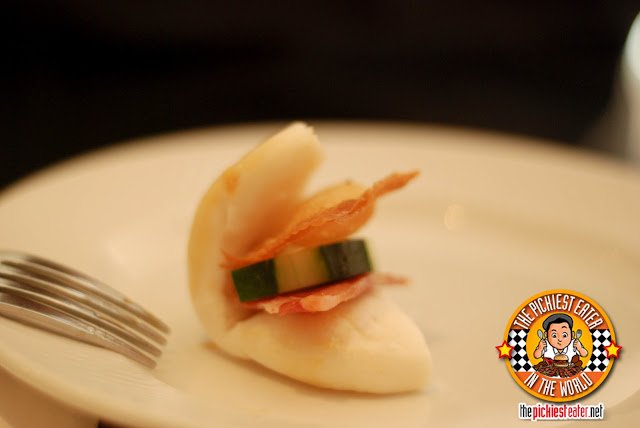 You could smell the aroma of the ham from feet away, however, for a guy with a sweet tooth like me, It could have used a bit more drizzling of it's delicious pineapple sauce. If anything though, the deep fried bean curd didn't do anything to help the flavor of the dish. In fact, it might as well have been a deep fried lumpia wrapper. 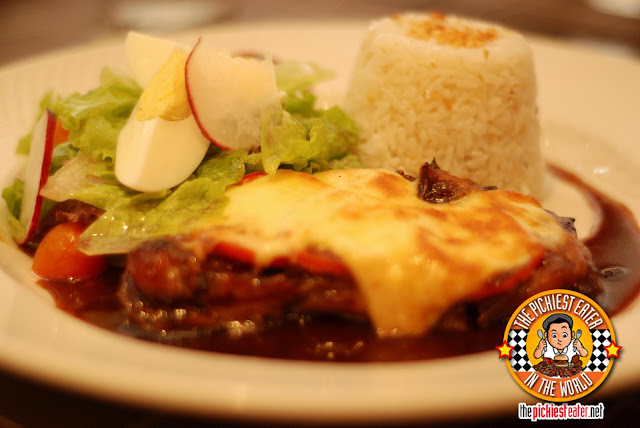 I ordered Rina the "Feliciano" (P475), which is Felix's "Award Winning Chicken Adobo". Felix used a juicy thigh fillet instead of chicken parts, topped it off with tomato slices and melted cheese, and drowned in their adobo sauce. The dish also comes with a heaping garden salad and garlic rice. Though it was "Adobo", it didn't have the strong vinegar taste that I'm used to. In fact, this version was actually sweeter than what I'm used to. 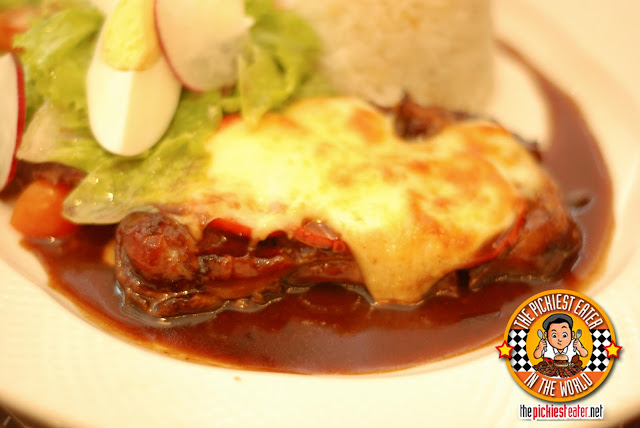 And given the fact that I just mentioned that I've got a sweet tooth, especially when it comes to entrees, I actually enjoyed this, but Rina noted that it did feel like there was something missing. My conclusion was, if the acid of the sauce was going to be that mild, then perhaps they could have countered it with a stronger tasting cheese. The cheese topping was nicely melted, but flavor-wise, it lacked a punch. Having a mild sauce and a subtle cheese just made it feel like it was a little bland. 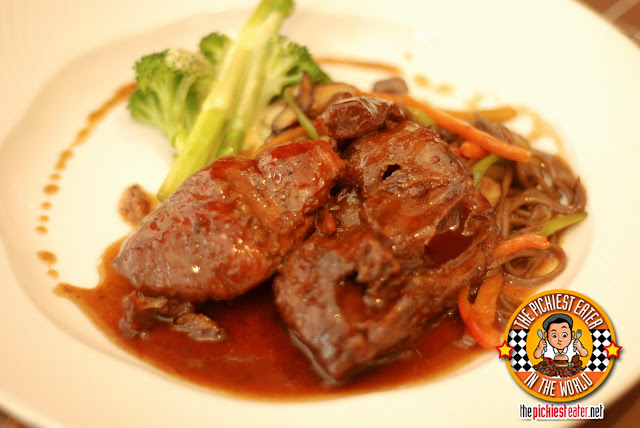 I ordered the Charlotte (P695) for myself, and as soon as I took my first bite, I couldn't resist letting out a chuckle. You see, the night before, I had dinner in my mother's house in Antipolo. Knowing that I would be having dinner there, she made it a point to have the dish that I had been requesting for her for quite some time now cooked: My Yaya Kit's famous "Estofado De Carajay". It had been years since I last had my yaya's "Estofado De Carajay"- which is a rump of pork braised in a sweet sauce, and served with braised bananas and sweet potatoes- so you can imagine how I absolutely decimated it when placed in front of me. 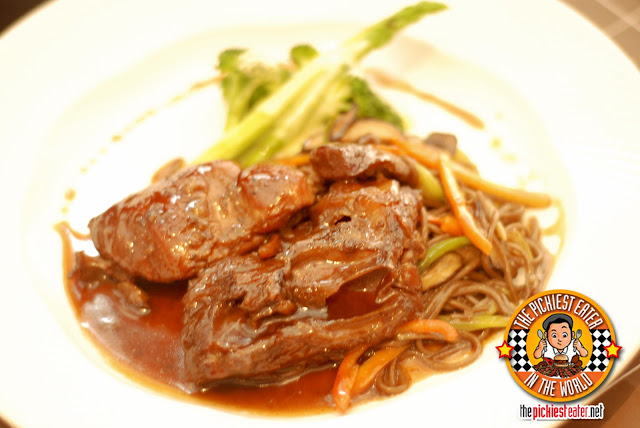 I took a bite from the Charlotte, which was described in their menu as "Braised Kurobota Short ribs, with chestnuts, mushrooms and buckwheat noodles", and realized that after weeks of studying Felix's menu so I could decide what to try, I ordered the dish that tasted eerily close to the dish that I just had the night before... my Yaya's "Estofado De Carajay".

Given that it was "Kurobota Short Ribs" ("Kurobota" being the "Kobe/Wagyu" equivalent of Pork), it came to no surprise to me that the meat offered little resistance when pierced, with the tip of my fork going straight down to the plate. The last time I had Kurobota was in its pork belly version at Lemuria, and it was one of the most amazing meals I had ever had.

The best way to describe it would be that it had a similar taste to "Humba", of course with a nicer piece of pork used. I wouldn't think to eat this dish with noodles, but the Buckwheat noodles was actually a nice companion to the dish. Sure I could easily have paired this up with plain white rice, but that would be boring. Not counting in "The Little Rascals", I had never  heard of "Buckwheat" before, let alone as a form of noodles. It had a rougher texture than the traditional kind, but it was stir fried with some mushrooms (But I didn't care for the chestnuts so much) and it was pretty amazing.

The sidings were broccoli and another vegetable that I suspect was asparagus. Naturally I didn't like it, but I do have to commend the cream sauce that it was drizzled with.. which suddenly made those green veggies edible (hehe). 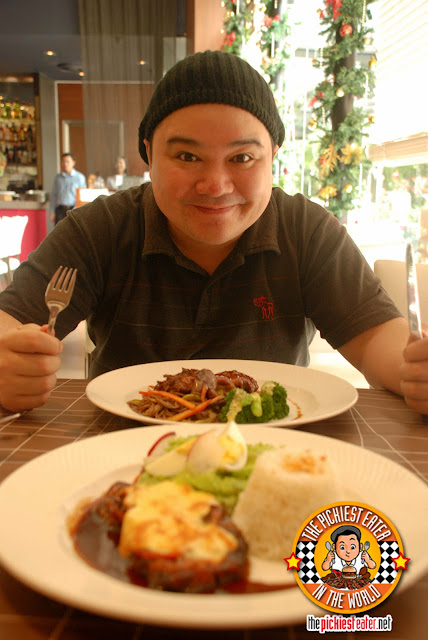 After polishing off all those plates, Rina and I didn't have room any more for Dessert.. besides, she was saving up space for her sour cream popcorn for Chimara (She ate two bags. And I fell in love with her all over again).


Though it is a bit too pricey for my taste, because of their reputation, i'm still very interested in trying their other dishes, particularly their CY Royale, which is a Wagyu Burger with Fried Mozzarella and Cranberry Sauce, as well as their "Cordero", which is their Lamb Short Ribs. The adobo was good, but nothing I would deem as "Award Winning". 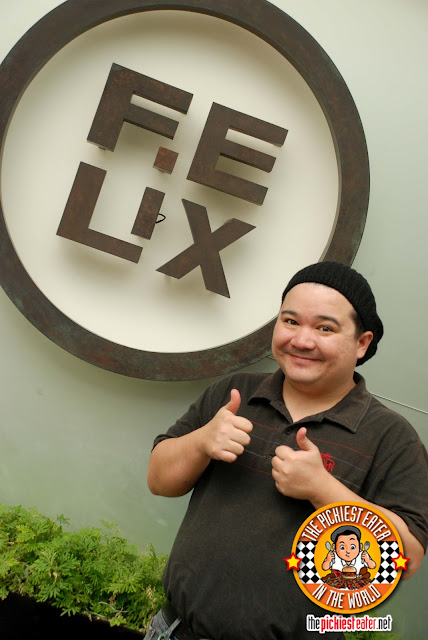 This was a good deal from CashCashPinoy (P500 for P1000 worth of food) that I'm glad I got, so I could take my wife out on what we call "Rina Day" - One day of the week where I take her out to wherever she wants and the day is all about her. She's been doing an amazing job with Baby Rain for the past month (and actually even before that), so she really deserved this break.

If you're curious about the movie, well, I have to admit that it was actually a lot better than the previous ones. But truth be told, that's just like saying "Breaking Dawn" Part 1" was the best Rabbi in the Vatican.

Posted by The Pickiest Eater at 8:24 PM