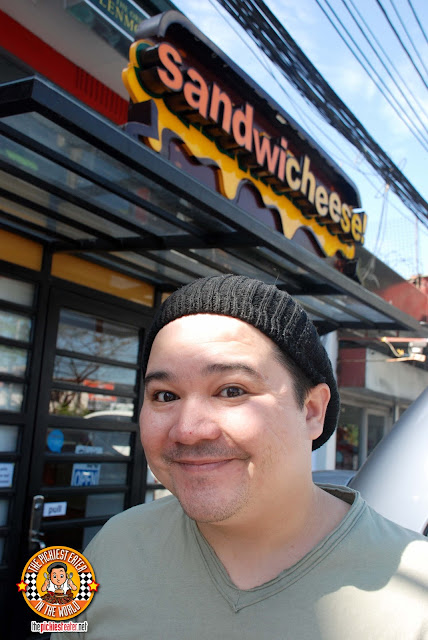 Are you one of those people that can't have a meal without rice?  Rina and her sister Chaikka, as well as a lot of my officemates absolutely refuse to have lunch or dinner without it. Me, on the other hand, I'm completely ok with a sandwich or burger for lunch. Maybe it's my fondness for bread that helps create a sense of satisfaction in my meals with a sandwich in lieu of rice, because sometimes, I actually even prefer it to a rice meal. I'm always on the lookout for a good sandwich, which is why I was immediately drawn to places such as Chuck's Deli, The Cheese Steak Shop and Elbert's Cheese Steaks.

I found out that one of my (and it seems everyone's) favorite restaurants, Bannaple, spawned a younger sibling right beside its first Katipunan branch, called "Sandwicheese", and I was immediately intrigued.

So last Saturday, after we took Baby Rain to the doctor for her check up, my tummy started grumbling. I told Rina that I wanted to check out Sandwicheese. 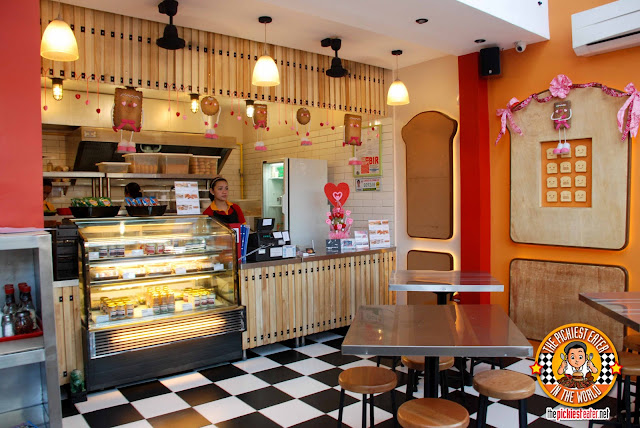 Sandwicheese is a cozy nook with refreshing homey feeling. A sunroof covers the place, so the atmosphere is bright and vibrant. The dining area isn't really all that big so if you're a big party, things might get a little cramped (which is fine, depending on who you're with). Remember that its  along Katipunan, so parking might be a little difficult, but as you'll see, it will be totally worth it. :) 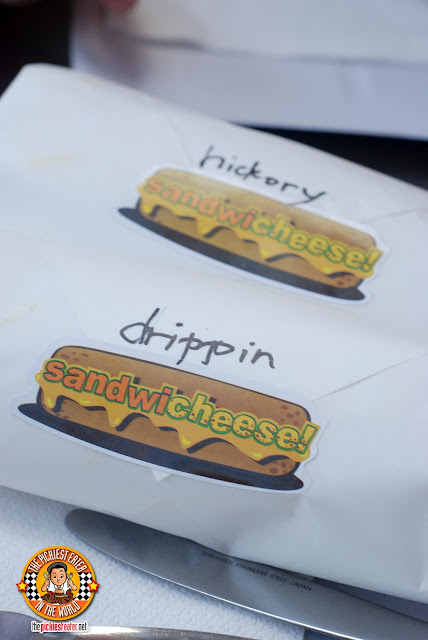 As I mentioned in my Elbert's Cheesesteak post, for some strange reason I like sandwiches wrapped in paper. It kinda reminds me of those Deli sandwiches that I would see in sitcoms (Joey's Meatball Sub in particular). 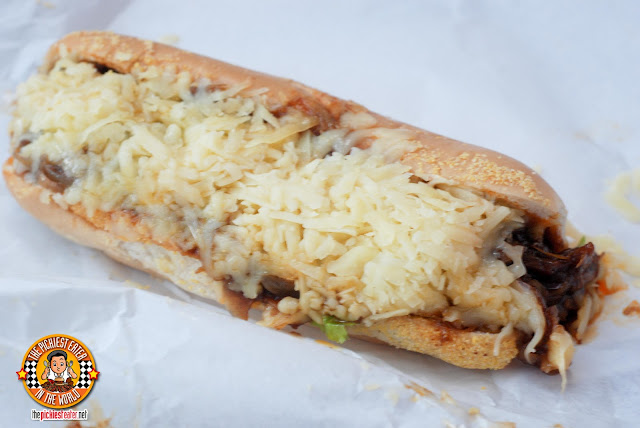 I'm a firm believer that a good sandwich begins with its bread.. And thankfully, Sandwicheese's Cornmeal Bun knocks it out of the park. The bread was soft, yet served as a perfect casing to the meat that was laid inside it. Me being me, I ordered the Hickory Shredded Pork (P160). 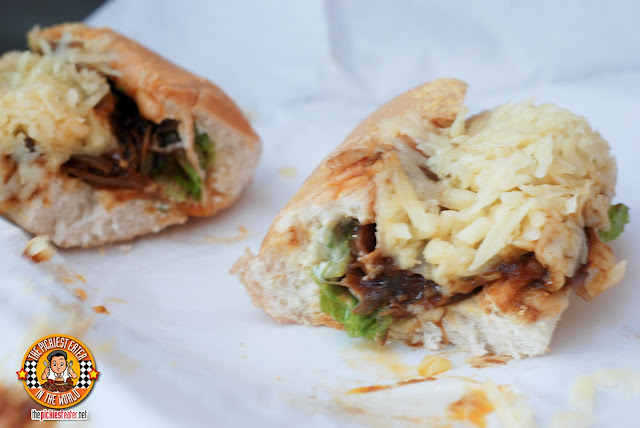 The medley of garlic cream cheese and parmesan bounced off the tanginess of the hickory sauce that bathed the shredded pork just beautifully. The carmelized onions helped quell the strong flavor of the hickory sauce from going overboard. I enjoyed this so much, I didn't even realize those sneaky bastards snuck in a piece of Romaine lettuce in it. 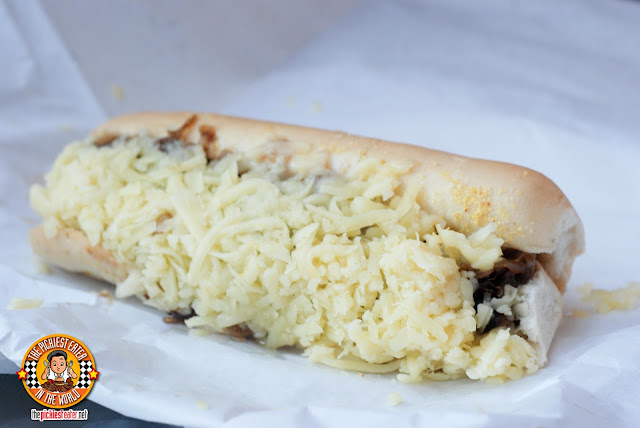 For Rina, I ordered the "Dripping Roast Beef" (P160). Like the Shredded Pork, they used the Cornmeal bun so we were already off to a good start. With its thick topping of cheese, it kinda looked like my Smoked Pork Sandwich. 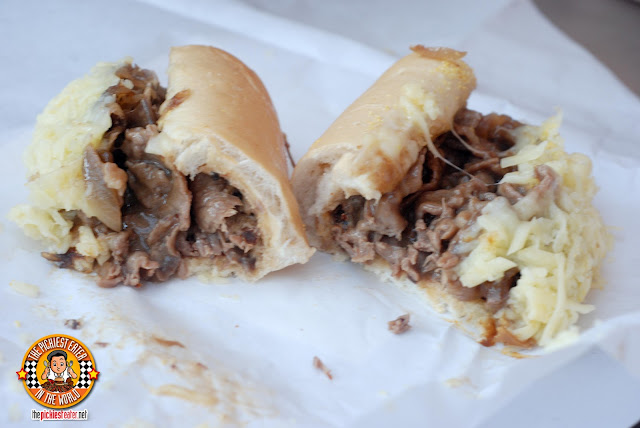 But breaking the sandwich apart revealed it was nothing like Hickory Pork. I get what they meant by "Dripping" because the beef strips were so juicy, it got me thinking that some of its own juices were poured into it. If my order had a robust flavor of hickory, this was mild, creamy flavor, which had a light tinge of acid from the sun dried tomato cream cheese. 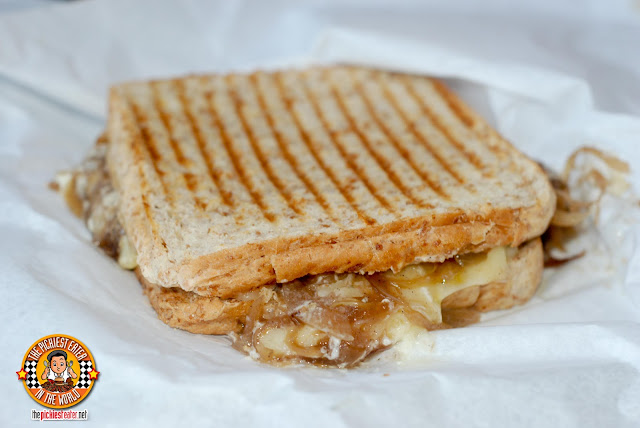 Since we had Baby Rain along with us, we brought her Yaya Tata with us as well. She said she didn't want anything too far out or heavy so I ordered her the Grilled Cheese with French Onion Sandiwich (P130) from their vegetarian sandwich selection. 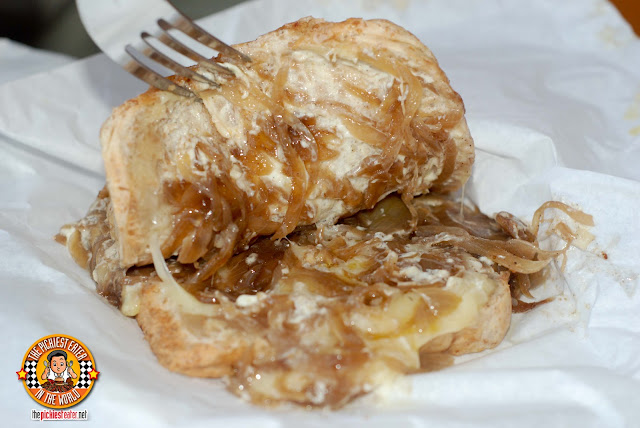 The whole wheat Panini was toasted just right, with the Panini grill marks leaving wonderful golden brown streaks down its back. Lifting the top slice revealed a generous amount of caramelized onions laid on a bed of cream cheese.

A lesser man would've been too embarassed to say, "Yaya, can I have a bite of your sandwich?", but it looked so darn good I said what the hell (I ended up with two bites).


For you non-meat eaters (aka weirdos), Sandwicheese also has some salads to choose from.