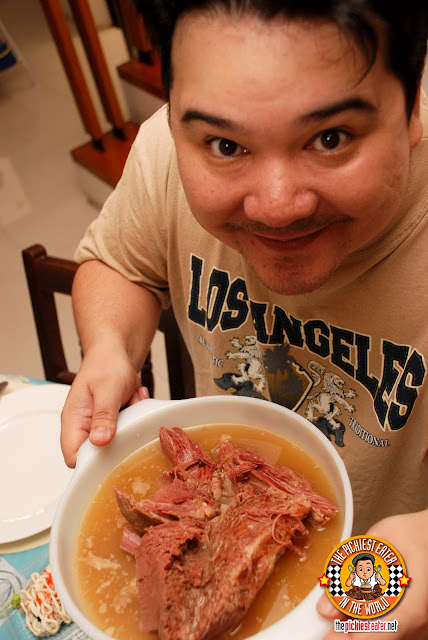 I remember the first time I saw a Corned Beef Brisket. I was a child- Either in the fourth or fifth grade- living in Cebu, and my father took us to a family dinner at one of his favorite restaurants.. "Eddie's Log Cabin". My dad would keep going back there for their Fresh Corned Beef. Even my sister would rave about it.

During my first time there, I was a bit surprised when I saw the plate the waiter placed in front of my father. I was expecting to see some shredded meat, sauteed with garlic and onions. Instead, it was a big hunk of beef, placed beside some potatoes and cabbage.. and oddly enough.. there was no "corn".

Maybe it's because it was my first time to taste corned beef that didn't come from a tin can, but Eddie's Log Cabin was my benchmark for fresh corned beef. But that was until I got my hands on some of Mr. D's Artisanal Philippine Wagyu Corned Beef.

Let's just say that bar has now been raised. 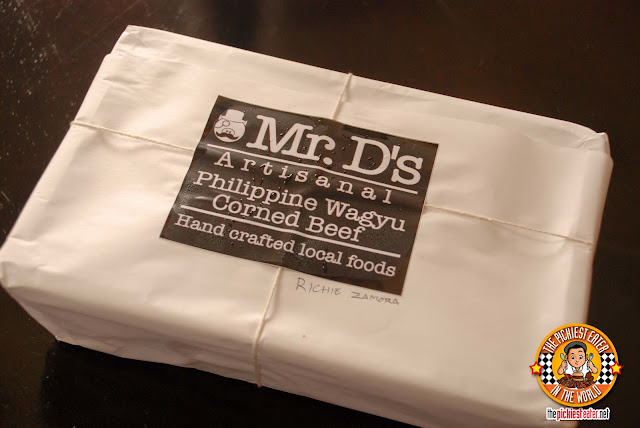 The packaging of the goods was simple but classy. It was in a plastic microwaveable box and wrapped in paper with the Mr. D's sticker on it, tied up with a thin piece of string. It kinda reminded me of meet you would get from an old school butcher. If you were to give this to me as a gift, you'd probably just need to add a card and you're good to go (hint hint)!

It was my Father In Law's birthday just a few days before, so Rina and I thought it would be nice to bring this with us to their place for a nice family Sunday lunch. 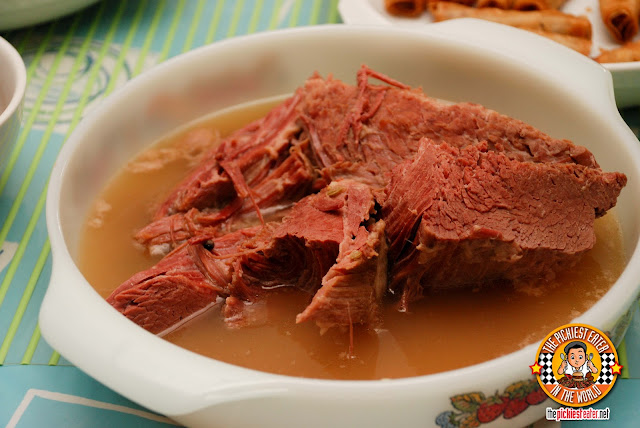 Preparing this was relatively easy. The instructions said to just add the pre-cooked meat and the liquid into a pot, then cover and simmer till it's hot. Easy as that. We were contemplating whether to take it out of the broth or not, but we found it to be quite tasty as well. So we decided to serve it as a deconstructed "Corned Beef Nilaga", with the potatoes and other veggies on the side. 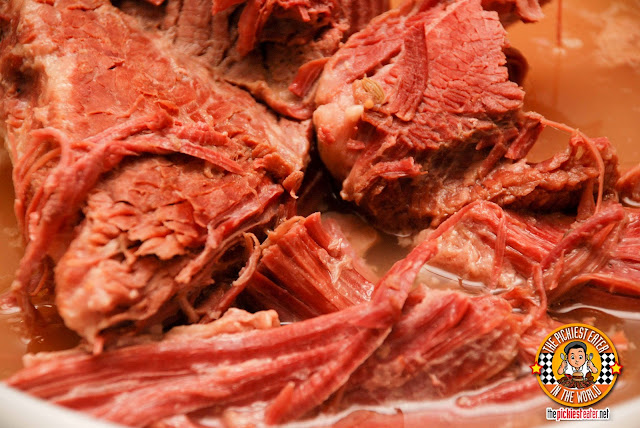 The meat was phenomenal. The marbling was absolutely gorgeous, especially for corned beef. It had nice linings of fat that I dont usually see in Corned Beef, but nothing that that would turn off someone who enjoys it lean.

The meat was cured for a week then slopw cooked for hours and it showed.  I honestly didn't think that something I had to reheat would still be so incredibly tender. Strips of beef tore cleanly off the slab like I was picking off cotton candy, and the meaty flavor of the beef was so good, a cow would be willing to commit cannibalism just to enjoy it. 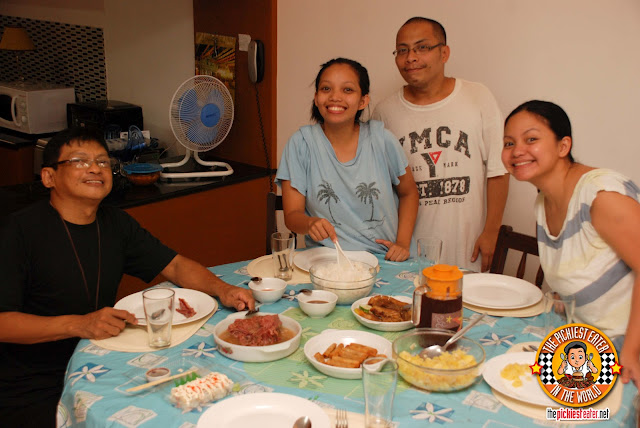 My Father In Law was using the broth as "sabaw" for his rice, and would say "Sarap!" after every other spoonful. I was also surprised how huge half a kilo was! Although we were five, and we did have other items on our menu for that lunch, there was still a bit leftover. You should've seen the face when Rina told her dad that we were leaving it with him (One of the hardest things I've ever had to do). 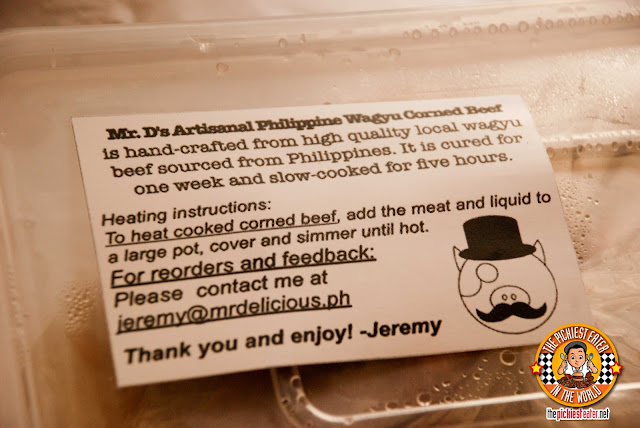 The care put into making this Corned Beef Brisket was very impressive, and it showed in every way possible.

The Wagyu Corned Beef is available for P1,250 for 1 Kilo or P650 for half a Kilo. Contact jeremy@mrdelicious.ph for orders!

I forgot to mention to our cook to have a care with the Corned Beef for picture taking, so please forgive how it looks like Roadkill. Had I known she'd mutilate it...

For more information on how to order, just go to:

Posted by The Pickiest Eater at 9:57 PM