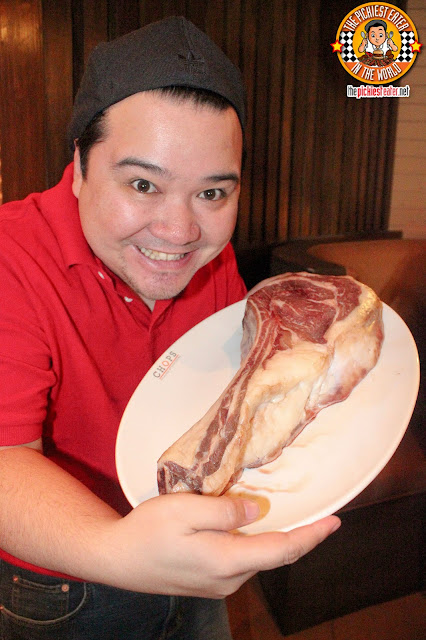 From the very first moment I laid my eyes on a small billboard inside the mall of Greenbelt Five that said "NOW OPEN: Chops Chicago Steakhouse" months ago, I made it my life's mission to eat there. It's no secret that I'm a lover of all things meat, which includes a fondness for steak, so that was a no-brainer. But what turned my "want" to eat at Chops into a "need", was when I saw their facebook post featuring their Charbroiled Bacon.

Yes you read that correctly.

So, when I got an invite to sample Chops Chicago Steakhouse's Executive Lunch Menu, I said "YES" so fast, I could have sworn it came out sounding like, "Sss!". 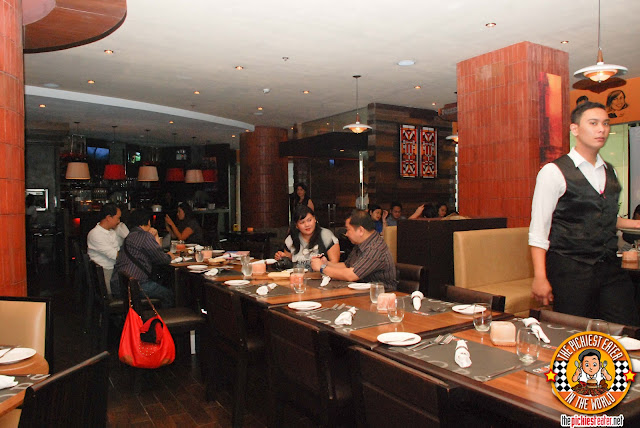 I initially thought Chops was an international franchise. The place just exuded manly elegance, and I am in complete agreement with other bloggers that have said that you could put "Chops" into a five star hotel, and it would fit right in.

Chops is located at the top floor of Greenbelt Five.. There is only one other restaurant in its section, which gives Chops a feel of exclusivity when you dine there.. Sort of like you're a member of a country club or something. The location helps add to Chops' reputation of being the ideal place for business men to dine in.

Chops servicing even goes as far as cater to office requirements of their customers.. Which includes WIFI service, Faxing, Printing and even scanning needs. You'd be hard pressed to find any other restaurant in the metro that goes that far out of its way for their customers. 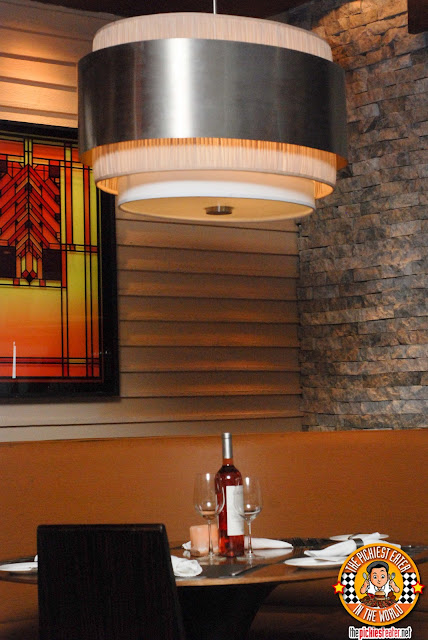 The interior design was modern, clean and sleek, but at the same time you could feel a bit of a throwback to the Al Capone-Prohibition era. With the old school gangster vibe going on, I couldn't help but walk in feeling like a "Bad Ass" (Unfortunately, I left looking more like a "Fat Ass").

The concept of Chops' "Executive Meal", was to make things easier for the businessman on the go. With the hustle and bustle of the every day rat race, Chops' alleviates the stress of having to choose what to eat for you, with a hearty Four Course Set meal, reasonably priced at P888, that assures your tummy will be filled without feeling too bloated throughout the day (Story of my life).

Every meal starts with complimentary Bread. 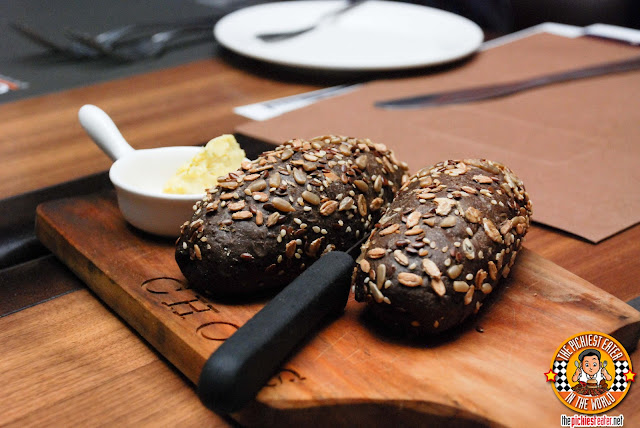 We tasted Chop's homemade Whole Wheat rolls, which tasted even better with their whipped butter. 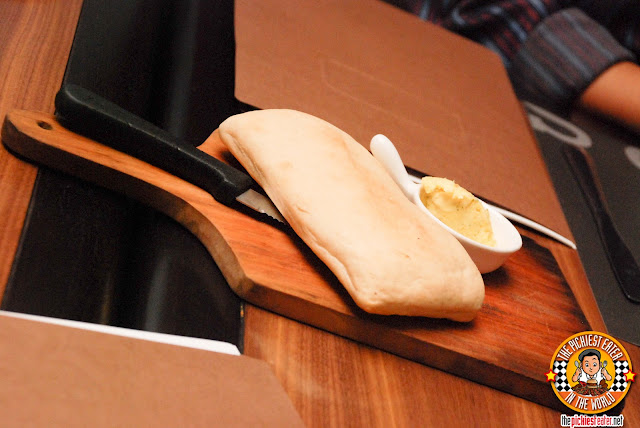 And their Ciabatta which was a good way to get your belly ready for the awesomeness that was about to ensue. 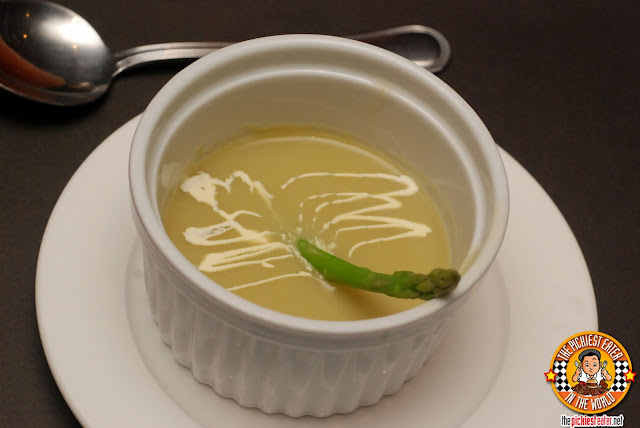 The first course of Chops' Executive Lunch is their Soup of the day, which on that particular Thursday, just happened to be the Cream of Asparagus Soup (Ala carte P170).

I don't eat asparagus, so that spear pretty much stayed where it was. I initially found the flavor a bit too mild for my taste, however a sprinkling of pepper and stirring the sour cream (which I forgot to do in my haste.. Whoops? hehe) into the mixture did the trick, making it a very filling soup. 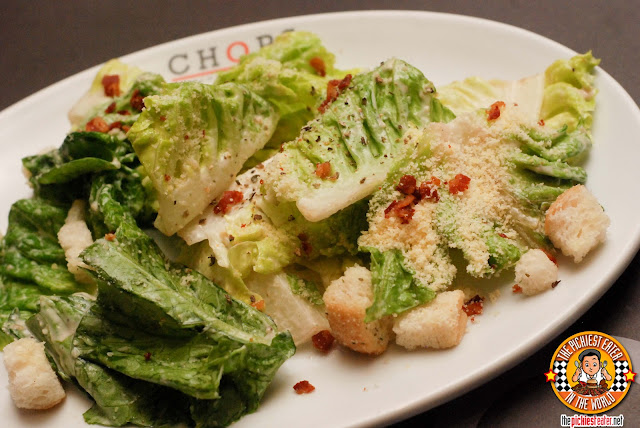 The second course of Chop's Executive Lunch is the Cesar Salad. You all know how I have a strong aversion to the green stuff, but I'm not ashamed to admit that I got halfway through this before I finally turned in the towel (and not because I was full). I think the mere fact that I was willing to take more then one forkful of lettuce speaks volumes.

Chops definitely wasn't stingy with the croutons, and I actually enjoyed the dressing, mixed with the bacon and Parmesan cheese.

And that's all I have to say about that (I have a rep to protect). 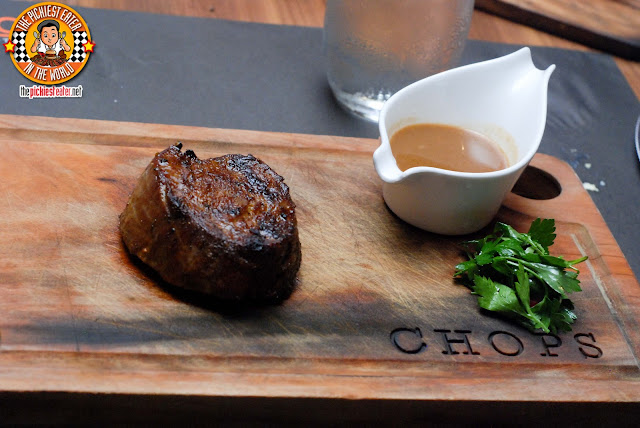 The undeniable star of the Executive Lunch Meal, is the Wisconsin Beef Tenderloin. The steak is served on the custom made Chops Chopping board, and with a side of Gravy and   You can request for your preferred meat temperature, however their recommendation is to have it at Medium or medium rare. 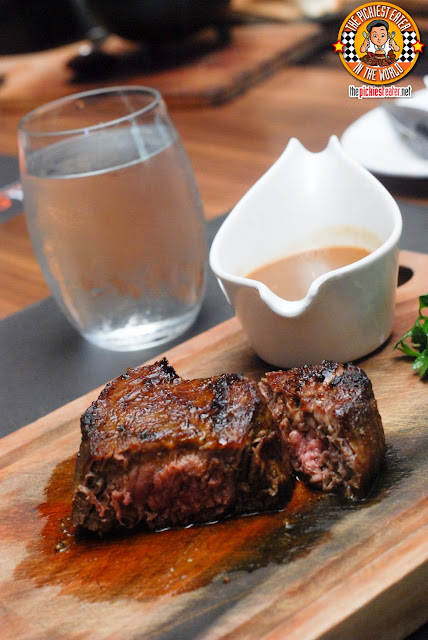 I was admittedly a bit disappointed when I found out that the steak that would be served was tenderloin.. Meaning it would most likely be bereft of any fat. Lo and behold, i was right.. But what I didn't anticipate, was that despite the absence of the fat, the steak was still incredibly juicy!

They served me my steak medium rare, meaning the center was pink and had a small patch of blood on it, which ended up working out perfectly for this specific cut. The natural flavor of the steak was phenomenal, rendering the side of gravy it came with, totally useless... Until I actually tried the gravy and discovered it was the perfect compliment to the meat. 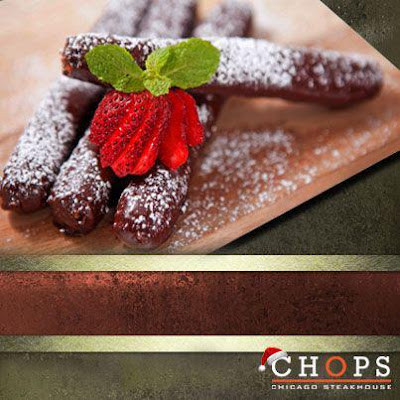 The proverbial cherry on top (or in this case, Strawberry), Was the Chocolate Cigar that is served for dessert. The "Cigar" is actually a delicately rolled Dark Chocolate Cannoli, filled with a Bourbon Marscapone Cream Filling, and dusted with a "White Chocolate Ash" to balance the flavors out.

Long story short, paying P888 for this meal is a real steal!!!

Because every meal deserves some sidings (P180 each).. Here are a few for you to choose from: 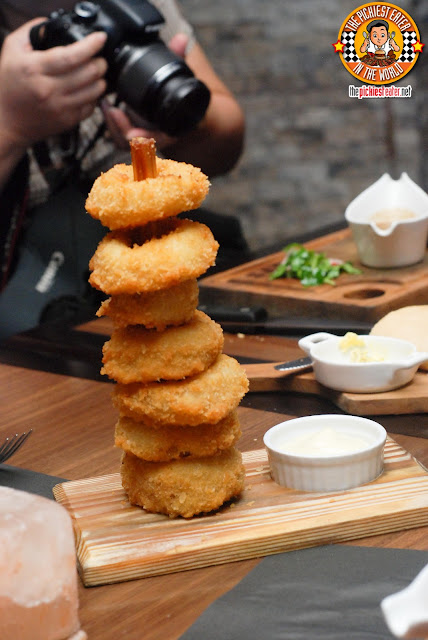 Beer Battered Onion Rings - The coating will feel a bit too thick at first, but when you bite through it, you realize that the proportion of batter to onion is just right. The batter is nicely salted, with a small touch of heat that blends perfectly with the innate sweetness of the onion and the creamy mayo dip. 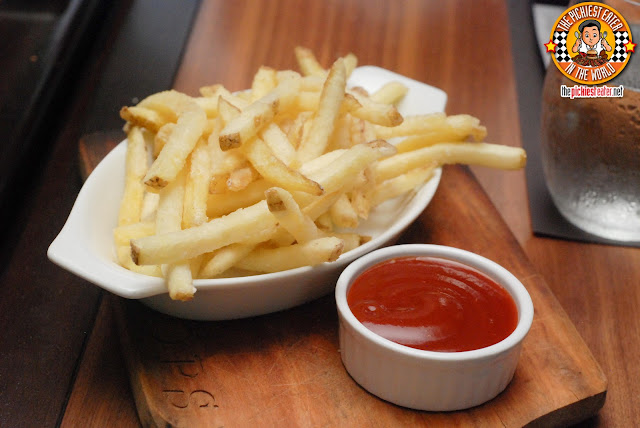 Chop's House Fries should come with a warning on it, because its one of the most addictive things you'll ever eat. It has a bit of a rough texture, which adds to its charm. I could be wrong but I tasted a bit of truffle oil in it.. Absolutely no ketchup was needed for me.. One of the best fries I've ever had, no joke! 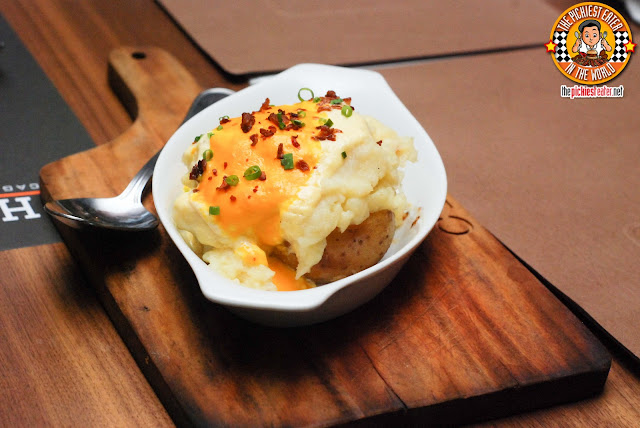 As a potato fan, it was my civic duty to try their Potato Overload. And Holy crap was it good. At first you're left wondering.. "Is this mashed potato that I love? Or baked potato that I hate?" It ends up being a cross between the two, but done masterfully, with a thick coating of cheese on top, not to mention a sprinkling of bacon! Pure genius! 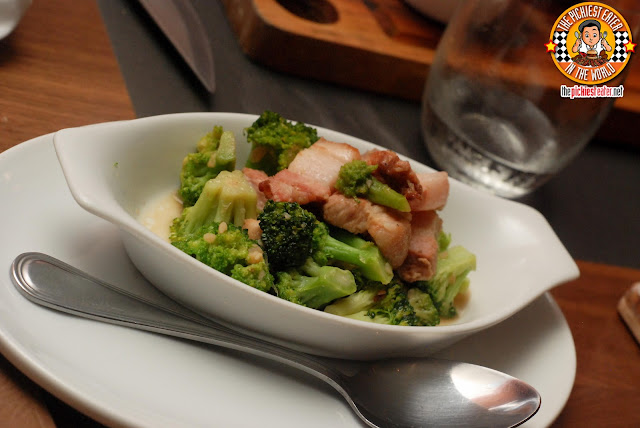 If my mother only made broccoli dishes with smoked bacon in it when I was a child, there's a chance I might be eating more of the stuff today. Aww who am I kidding? I probably would have done what I did here with Chop's Double Smoked Bacon with Garlic Broccoli, and pick out the bacon (which was phenomenal btw), and leave the Broccoli for the others (A selfless soul, I truly am). 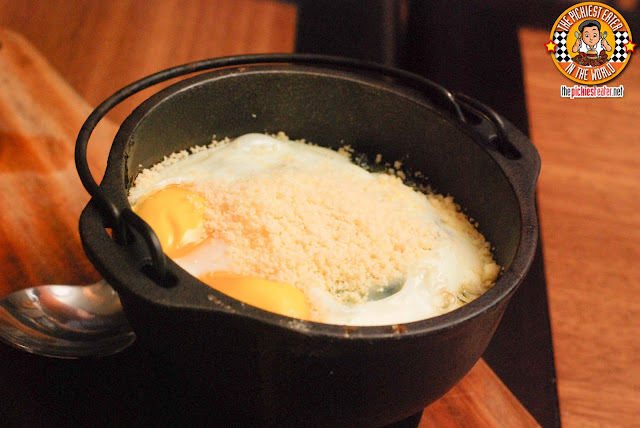 I was a bit intrigued by the Creamed Spinach with Organic Eggs and Parmesan Cheese. It was brought to our table, still smoking in a little cauldron, seemingly made by a little witchcraft. True enough, the flavor left my taste buds spellbound. The combination of the egg, creamed spinach, and Parmesan cheese made this an absolute delight to eat.. especially for a veggie dish! 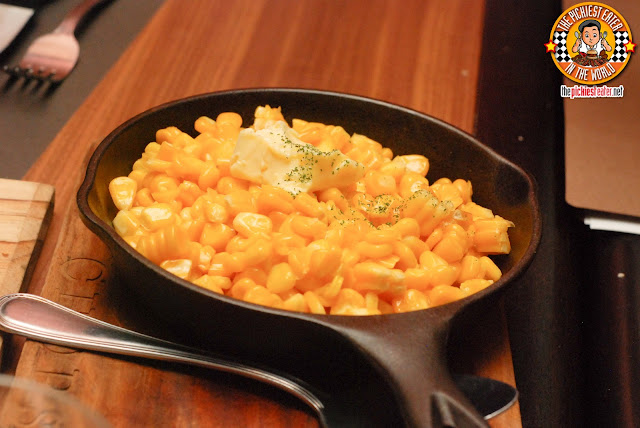 If you want to just stick the basics, you could always order their Skillet Buttered Corn. They are quite generous with the butter, giving the corn an added sense of creaminess, making it an ideal compliment to your savory steak.

I nearly did a quadruple backflip when they started placing samples of the famed Starters in front of us.. Especially the two that I had been dying to try! 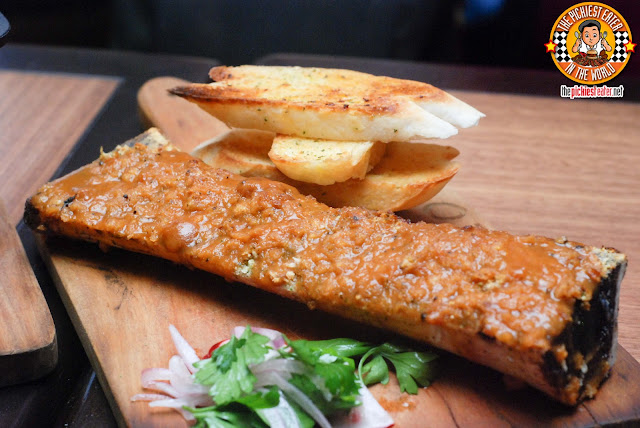 The Bone Marrow (P270) Didn't come out the way I was expecting it.. But in fact, it ended up becoming even better. The bone marrow wasn't as fatty as I imagined it to be, which was a good thing, but make no mistake about it, this isn't for people who like to eat healthily (Meaning people who aren't like me). Fantastic flavor of the marrow went perfectly when I smeared it on the toasted crostini. 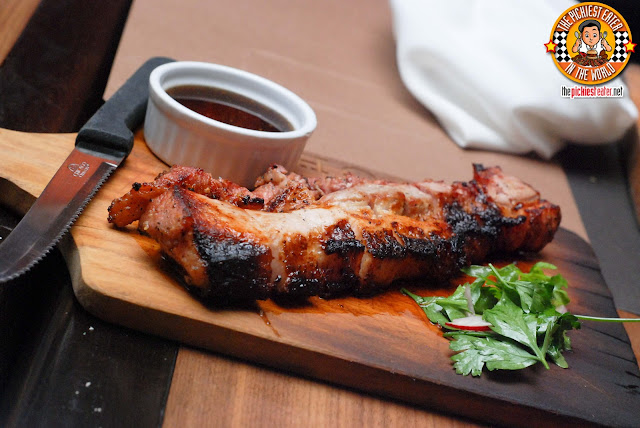 Chops has Charbroiled Slab of Bacon (P320) on their menu. I'm a straight man, but when I saw them place this on the table, I wanted to give Chops' owner Chef Pete Ayson a huge kiss (Good thing he wasn't there hehe).

I've had some good bacon in my time, but the small piece I ate was like swallowing a piece of heaven. This must be what angels have for breakfast. The edges had a wonderful burnt caramelization to it, that gave the exterior a bit of a sweet "crust", yet the meat itself was remarkably tender.

What blew my mind away more was the Pomengranate Honey Mustard with Black Pepper Dip. It was thick and almost syrupy, and I cannot imagine a better dip for the bacon.

This was one of the best things EVER. 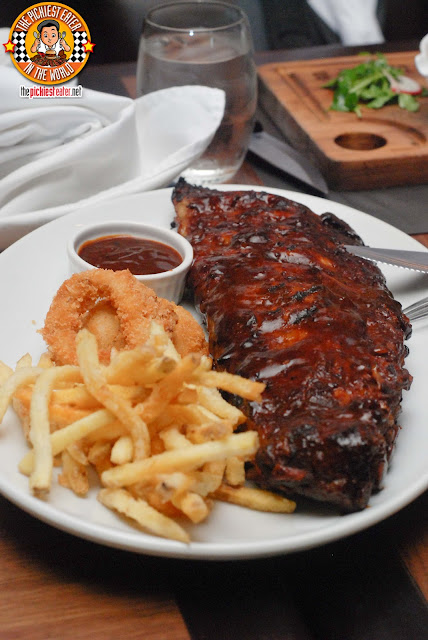 The first thing I noticed about the Barbecued Pork Ribs (P625), was that the sidings consisted of both Onion Rings and House French. The next thing that caught my attention was the gorgeous aroma of the BBQ Sauce. It was a distinct sweetness that just overwhelmed my senses.

The meat tore cleanly off the bone with one simple tug of my fork. It was incredibly tender and flavorful, that the extra BBQ sauce really wasn't needed anymore, except for perhaps, dipping the fries and onion rings. 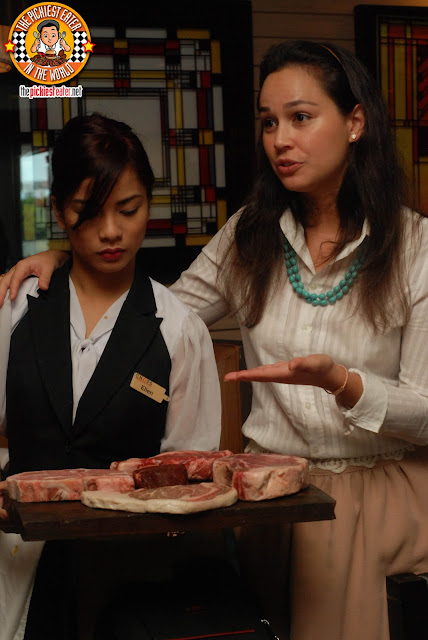 Our hostess for the lunch, the lovely Celina, is a dead ringer for Laurie of "Walking Dead". She brought out Chop's famed "Steak Board" for us to take a glance at (I was told strictly no touching, systematically thwarting my attempt to stuff a Rib Eye down my shirt when Celina wasn't looking). The board is brought out when customers are deciding what steak to order (I would have gone with "D: All of the Above"). 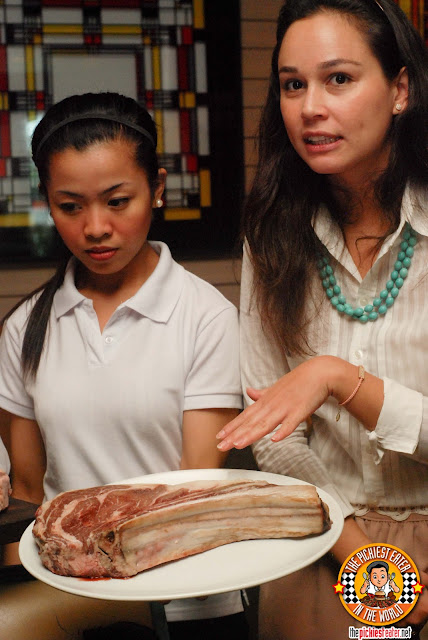 The steak that brought out the most "oohs" and "ahhs" from me the group was the Tomahawk Steak. This was the biggest steak I have ever seen in my entire life. There was no way this came from a cow. This had to be from a Brontosaurus or something, because it looked like something straight out of the "Flintstones", I kid you not. I lifted up the plate for my cover shot (Which was taken by none other than super blogger, "The Purple Doll" by the way) and I could have sworn that steak weighed as much as my 15 month old daughter.

The Tomahawk Steak can feed up to 4-5 people, but if I'm part of that group, you're not getting any.


Patrick Swayze said it best, when he said "I had the time of my life" at Chops.. (I know he didn't say it, but you gotta admit, when you hear that song, he's the first person you think about, right?).

I've had a "Power Lunch" before, but this was something else. What I had at Chop's Chicago Steakhouse was perhaps the most powerful lunch in the world.


I meant to ask, but their menu didn't seem to have the much talked about "Triple Bypass Burger".. Something I desperately have been wanting to try! I hope it isn't phased out yet..

In just one visit, Chops' Chicago Steakhouse easily ranks as one of my all time favorite restaurants!

Email ThisBlogThis!Share to TwitterShare to FacebookShare to Pinterest
Labels: Bacon, Chops Chicago Steakhouse, Greenbelt, Makati, Steak, Where to Eat at Greenbelt, Where to eat in Makati