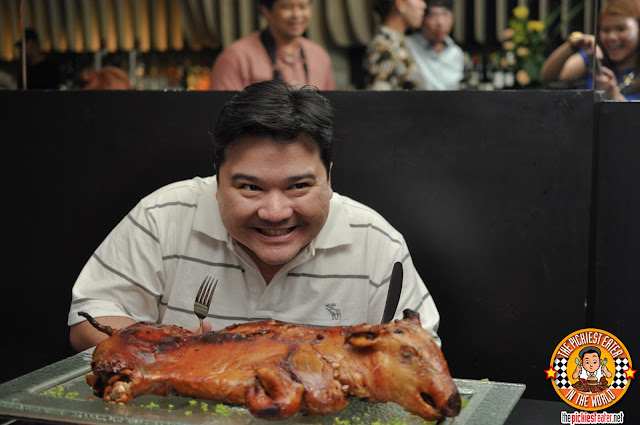 I don't know if you know this boring tidbit about me, but I'm a notorious introvert. There's absolutely no chance that you would see me at a bar or a super club in the evenings. Maybe it's because I don't drink. Call me corny and all that, but alcohol hurts my throat and no matter how hard I try, the darn stuff just won't go down.

When I was invited to go to Cova Tapas Y Sangrias, I had some slight apprehensions, because everyone I had asked about Cova, always replied, "You should try their Sangria!" or "They have a great selection of wines!". It was only when my buddy Spanky assured me that he wouldn't let the night pass without making sure our bellies were filled to the brim with delicious food that I realized that Cova was more than just a late night drinking spot.

Their Spanish food is pretty phenomenal too 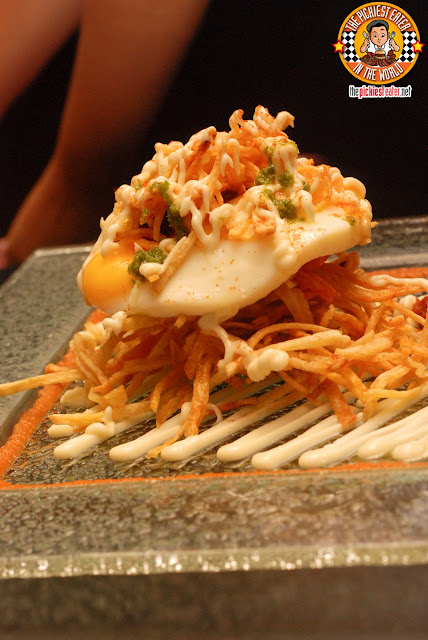 Since the dinner took place on a work night, I got to Cova a little late (as usual). The table my companions were sitting in, had a plate virtually empty with a little bit of potato strings all mashed up into a sticky mulch. I asked my buddy, The Hefty Foodie what it was, and all he could reply was "You've got to try it!"

Within seconds, and much to my delight, the server placed down this glorious looking plate, which featured what I could only describe as a golden tower of food.. The Huevos Cabreados (P320).

Not sure what's in the name, but there's no way this dish could ever have pissed me off.. Unless of course someone else finishes it before I managed to get my hands on it.

The plate featured a bed of homemade crispy shoestring potatoes, with a perfectly cooked fried egg placed on top. After that, it is topped off with even more shoestring potatoes, then drizzled with a creamy aioli sauce. Our server then mashed it all up, letting the egg yolk coat the potato strings, and blend with the aioli.

Lemme tell ya, I ate a lot of fine things that evening, but this was the dish that was most "me". It was simple, it was crunchy, it was creamy and it was absolutely delicious. 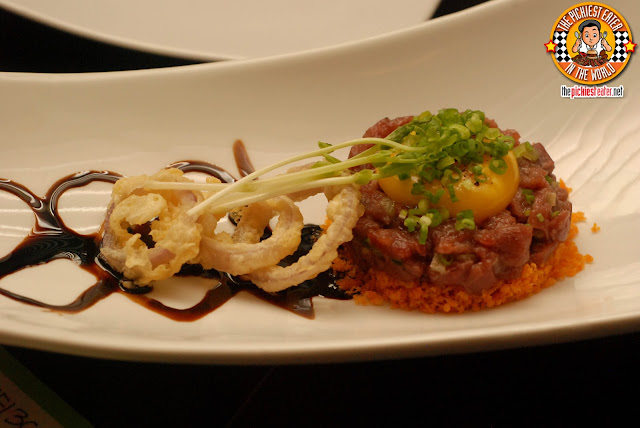 Normally I wouldn't eat raw beef, but my buddy, Dude4Food looked like he was just about to cream his shorts when I asked him if the Tartar de Toro (P320) was any good. The dish was a molding of fresh tenderloin beef with a chive topped egg yolk on top, laid on a bed of "Migas", which was chorizo fat (the best part of the chorizo) and breadcrumbs mixed together, with a bit of Piparra. On the side were crispy onion rings on top of a balsamic reduction.

Similar to the Huevos Cabreados, I just mix 'em all up and went to town on the plate. The breadcrumbs helped me get past the texture of the beef, but on the whole, I was really impressed with how all the flavors came together magnificently. 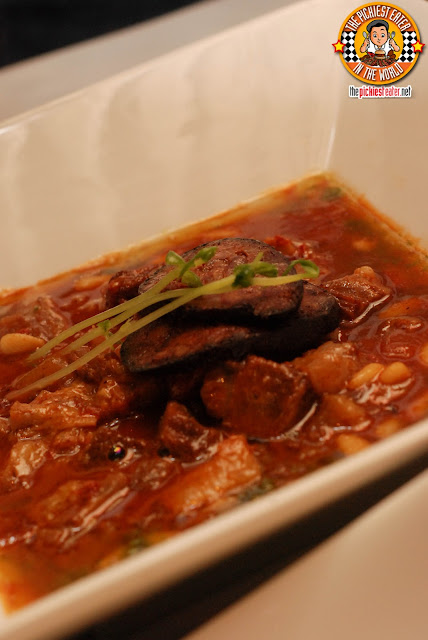 As much as I wanted to, I was unable to eat much (to my standards) of the Cap I Pota (P 250 Tapa/P 560 Racion). I was concerned that the tomato in it would trigger an acid attack in the middle of dinner. But I must admit, it was a stew packed with immense flavor, peppered with sultanas and pine nuts, as well as ox tripe, wagyu cheeks, jamon, and blood sausage. Each spoonful brought up a new mix of ingredients that made every mouthful almost like a new adventure for your tastebuds.

In my opinion, the mark of a good Spanish restaurant can be found in their execution of their Paella. 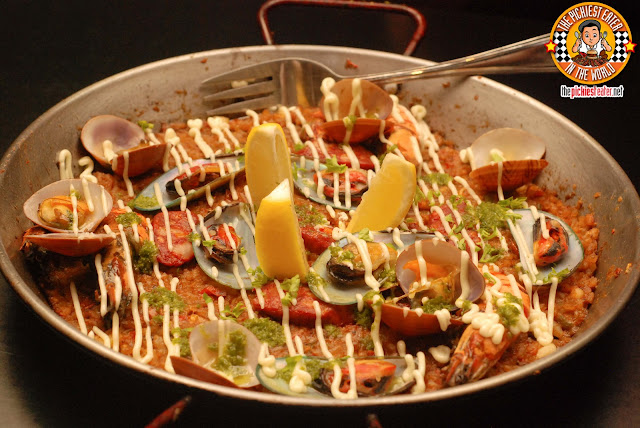 Even though I'm not too big on seafood, I gotta say, I enjoyed Cova's Paella De Mariscos (P900). The platter is good for around 4 people, so price-wise, it balances itself out. The paella is filled with generous servings of mussels, clams and prawns, as well as delectable slices of Spanish Chorizo. 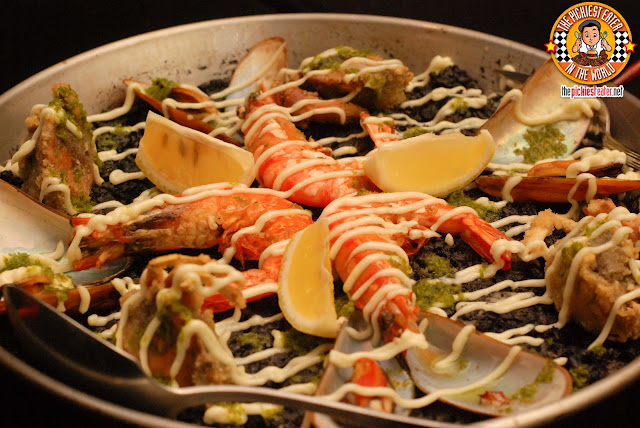 Although my companions were raving about it, I took a pass on the Paella Negra (P900 good for 4). Unfortunately, something I really don't eat is squid ink, so you understand my logic there. The rice was cooked in Squid ink, with an assortment of seafood, including mussels, squid and prawns laid out, all with a nice drizzling of aioli. Something different that I noticed, was the inclusion of Soft Shell Crab. First time I had seen it on a Paella before. 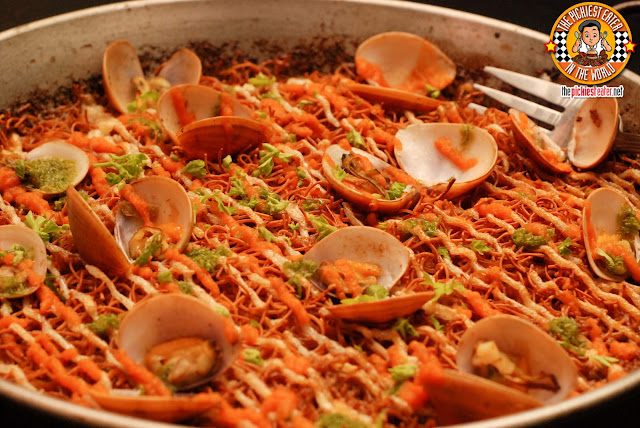 If a Chinese Cook and A Spanish Cook had sex collaborated, the result would be Cova's Fideua (P650 Good for 4). Fideua takes the concept of Paella, and replaces the rice with thin, vermicelli noodles. This was the first time for me to try a dish of this nature, and I was quite impressed by it. 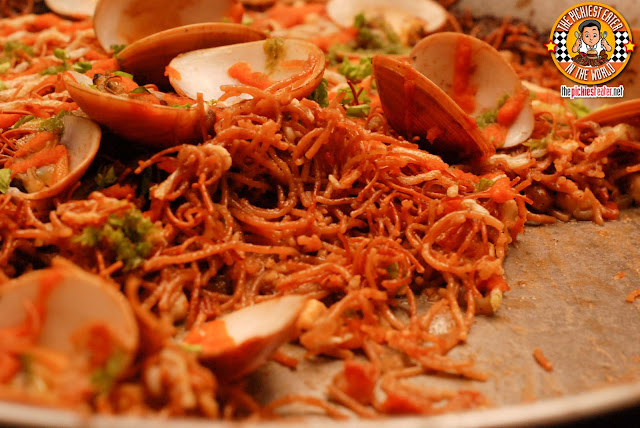 The noodles had were soft, with the strands in the upper layers toasted a bit, giving the dish a slight crunch, while the medley of flavors brought in by the seafood, such as squid & clams were highly evident. 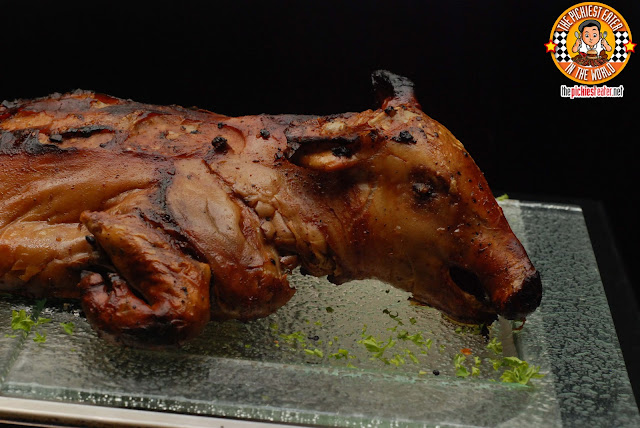 To me, the star of the night was undeniably the Cochinillo Asado (P3,500 must order 2 days in advance). This was a beautifully roasted whole suckling piglet, whose natural flavor was further enhanced by a variety of herbs and spices. 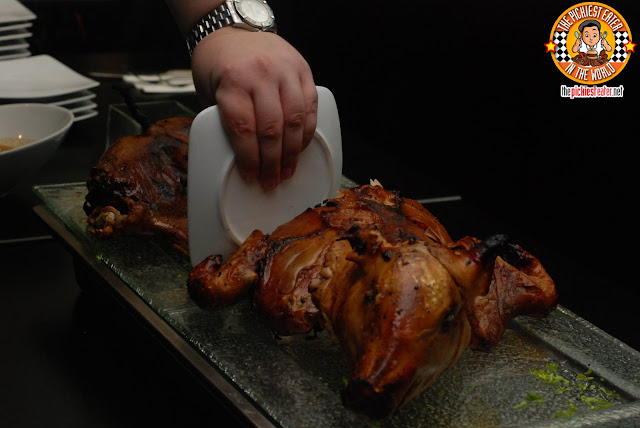 Chef Patrick Hesse, the man behind the evening's feast, showed us just how tender the meat was by taking a plate and slicing it through the pig with no resistance whatsoever. It was like a hot knife slicing through butter, further whetting my appetite.

I took my portion of pork and drizzled the "sauce" that came with it.. Which was basically the drippings mixed in with some butter.. It was AMAZING. 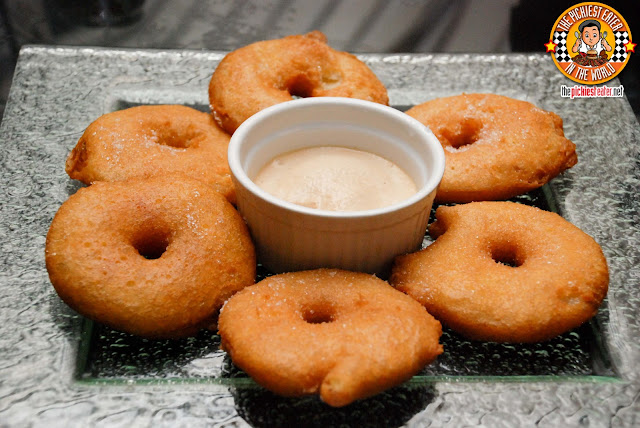 To cap off a phenomenal meal, we had some pf Cova's Apple Fritters, which I loved. These were light, fried donuts, with slices of Granny Smith Apples inside. The ice cream dip was the perfect equalizer to the tartness of the apples, but to me, the best really was the fried dough, that offered a delicate crunch with every bite. 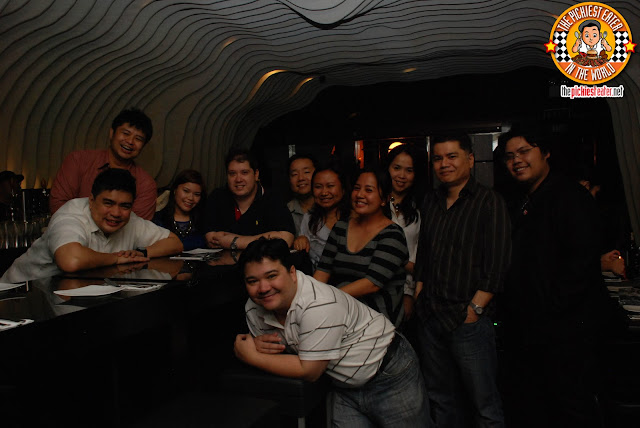 
Given that Rina wasn't with me this evening, I was so focused on making sure that I didn't screw up the food shots. In fact, I was so focused on it, I didn't realize that forgot to take pictures of the gorgeous interiors! But take my word for it, the place is stunning, and the intricate cave-like design adds character to the place.

Much thanks to our gracious hosts for the evening, Chef Patrick Hesse and Tatyana Guevara for their wonderful hospitality in treating us to the full Cova experience!

Cova is located at: 22 Jupiter Street, Barangay Bel-air, Makati
Like their Facebook page: https://www.facebook.com/covatapasysangria
Posted by The Pickiest Eater at 11:50 PM