You ever get that feeling like someone is watching you?

Quite deliberately, I tend to lean towards the more simpler fare when it comes to food. Some may even say that it's borderline "junk food". But since I became a blogger, every now and then, my gastronomic horizons are expanded, and I get opportunities to join sophisticated dinners prepared by a chefs that have cooked in some of the most prestigious restaurants from around the world.

One such meal - and perhaps one of the most memorable meals I have ever had - was just earlier this year at Vask Modern Tapas & Gastronomic Cuisine.


With Chef Jose Luis Gonzalez at the helm, it comes to no surprise that dining at Vask is really quite the gastronomic adventure. Chef Gonzalez brings with him years of experience working in some of the most renowned kitchens around the world, with the legendary "El Bulli" being perhaps the most elite. 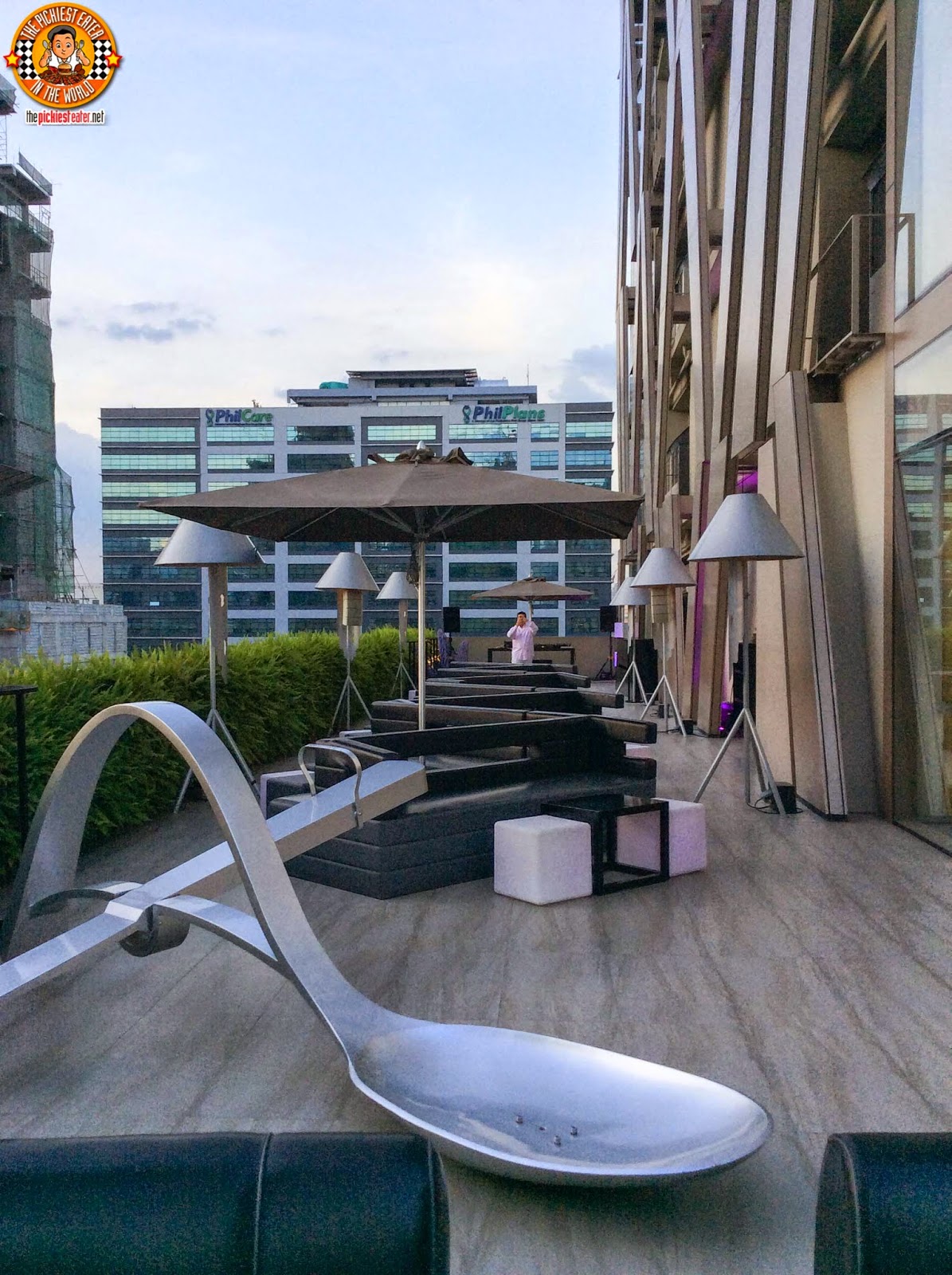 Vask offers you four different dining adventures to embark on. Our evening began on the Deck, an al fresco area where we got a spectacular view of the growing concrete jungle that is Bonifacio Global City. 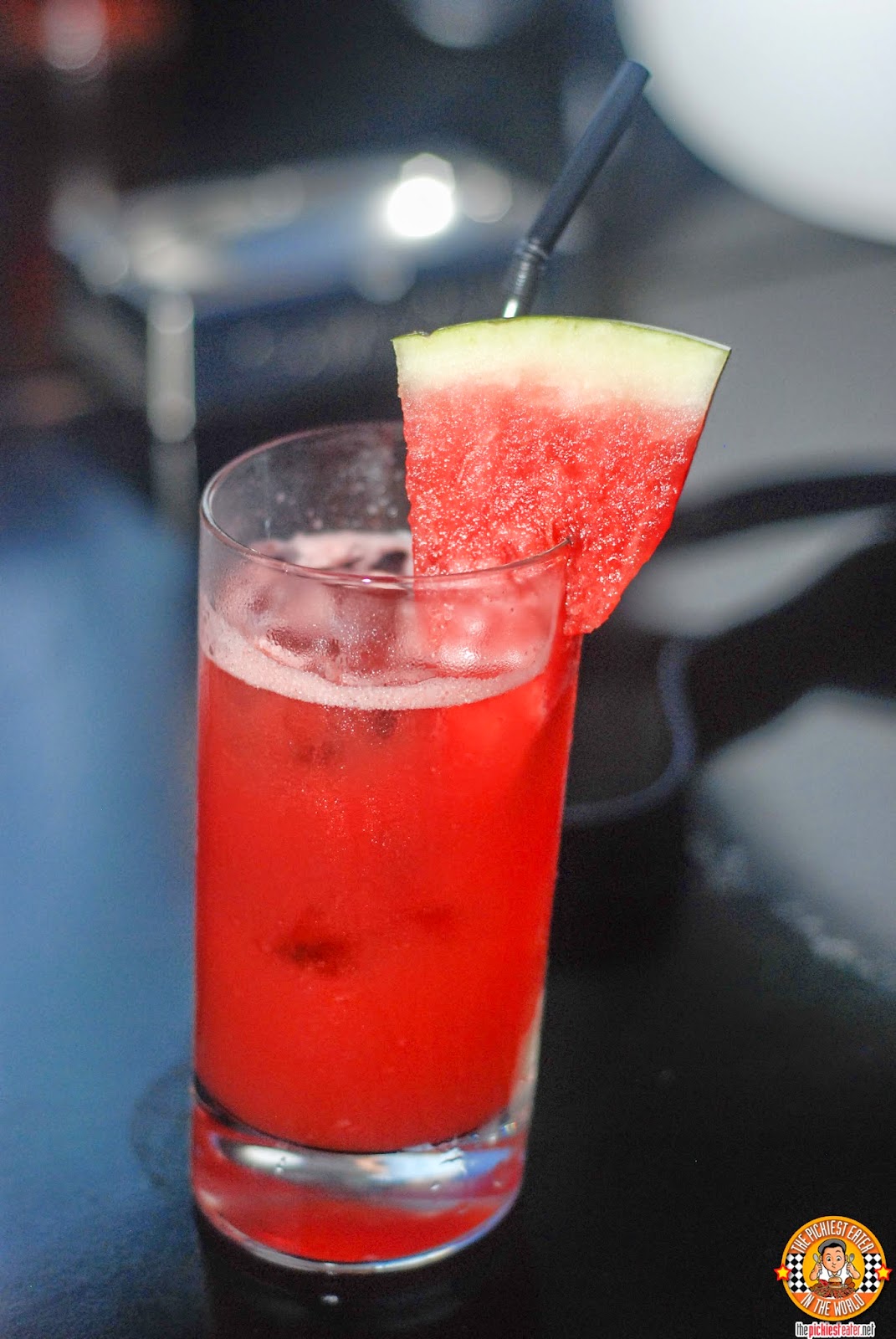 As my friends sipped on The Decks signature cocktails, I, on the other hand, made sure to keep me and my taste buds sober, and happily enjoyed my refreshing Watermelon Juice. 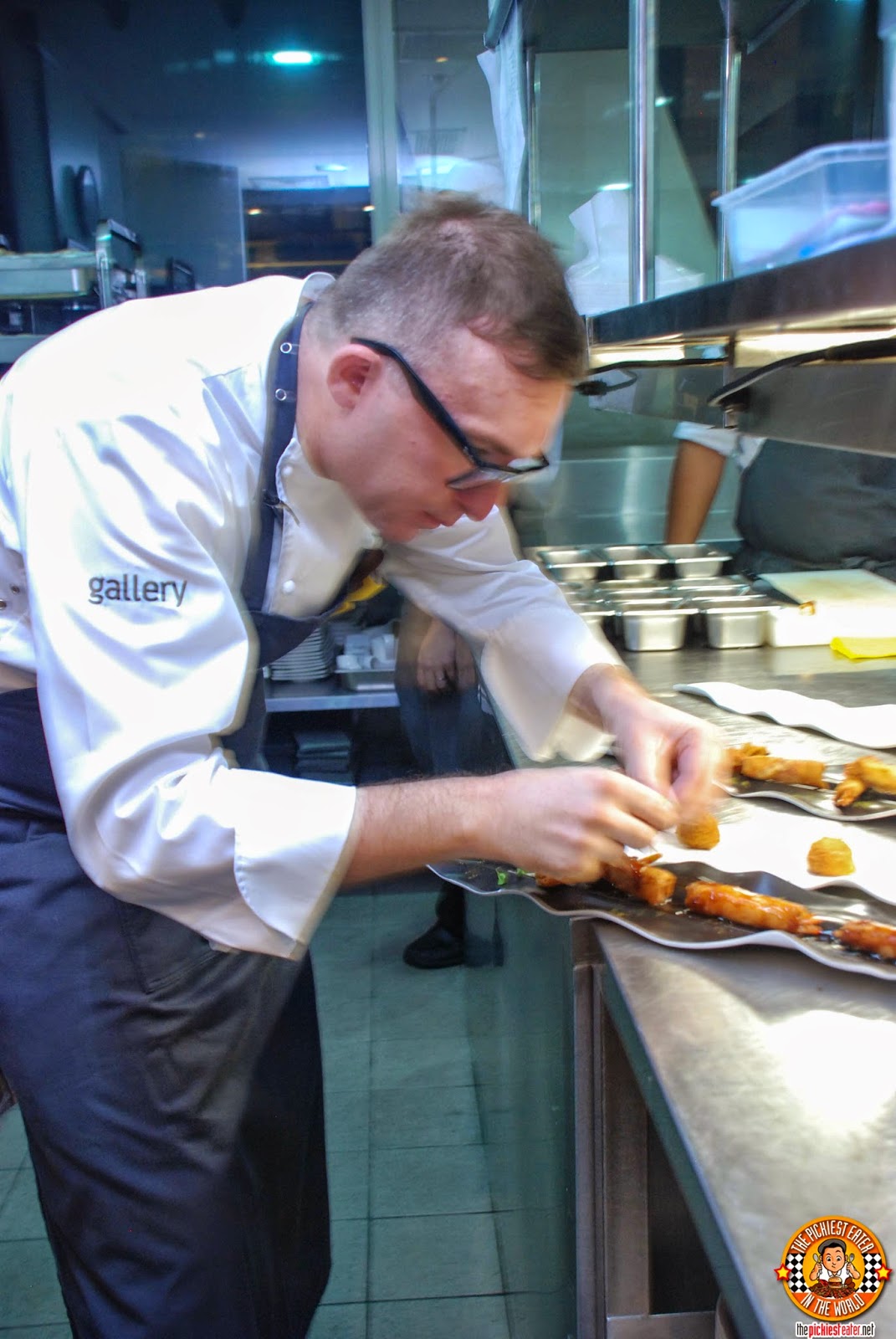 Meanwhile, inside the kitchen of The Vask Dining Room, Chef Chele, as he as he is more commonly known, was hard at work, preparing what would turn out to be an epic feast.

It was surreal watching Chef Chele taking command of his brigade, demanding everyone in his team meet his high standards in food preparation. 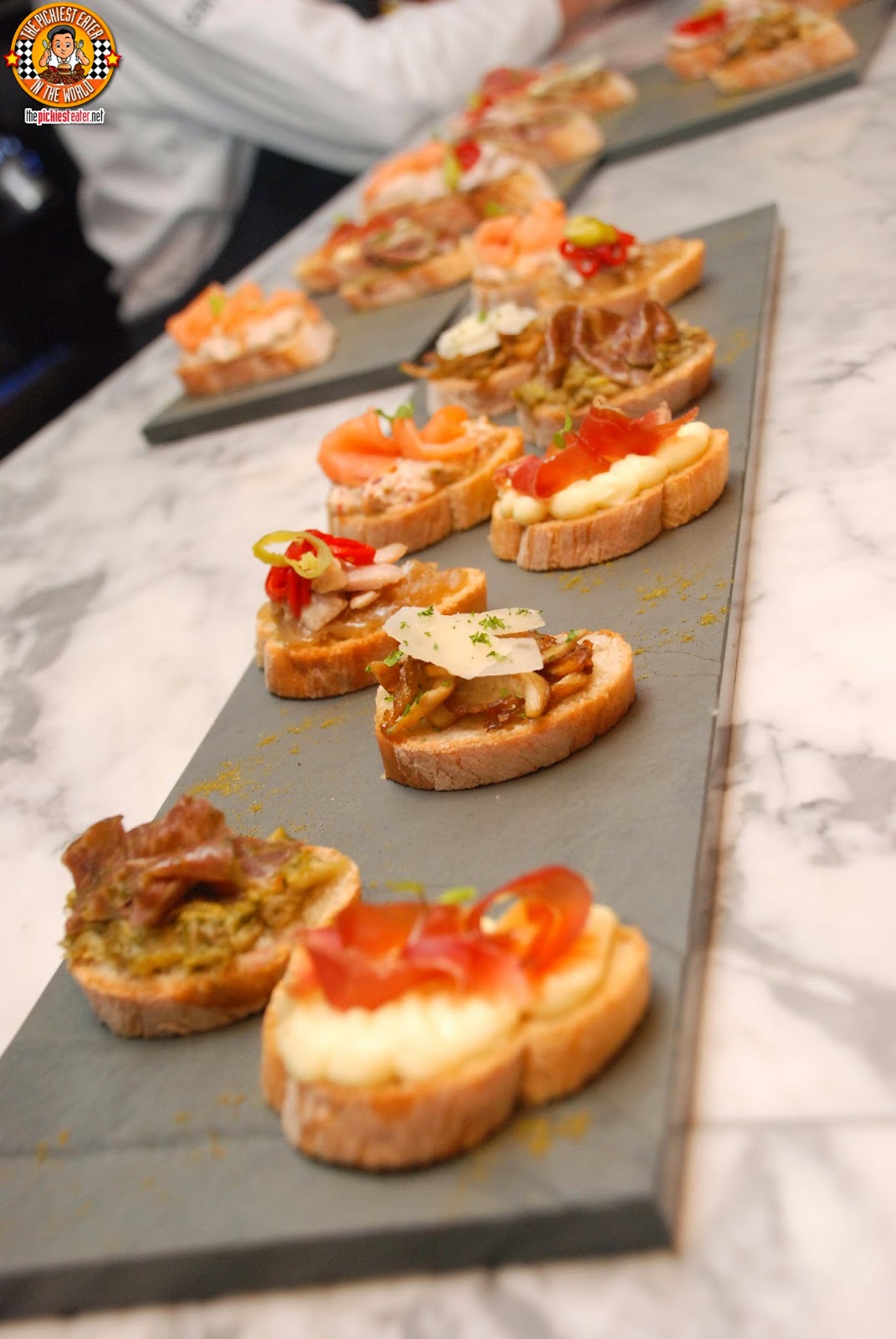 Our meal began with a selection of Pintxos (P95) which is the Basque version of Tapas. Chef Chele presented an eclectic selections topped on crisp bread, including savory choices such as Jamon Parmeson Mousse (Excellent) and the Wagyu Beef with Chimichurri (my personal fave), as well as seafood based offerings, such as the Salmon and Crab Tartar and the Sous Vide Tuna with Garlic Chili Oil, and the vegan Mushroom with Irdazabal Cheese.

You can't help but be impressed with the care taken to ensure that small piece of toasted bread is packed with immense flavor. 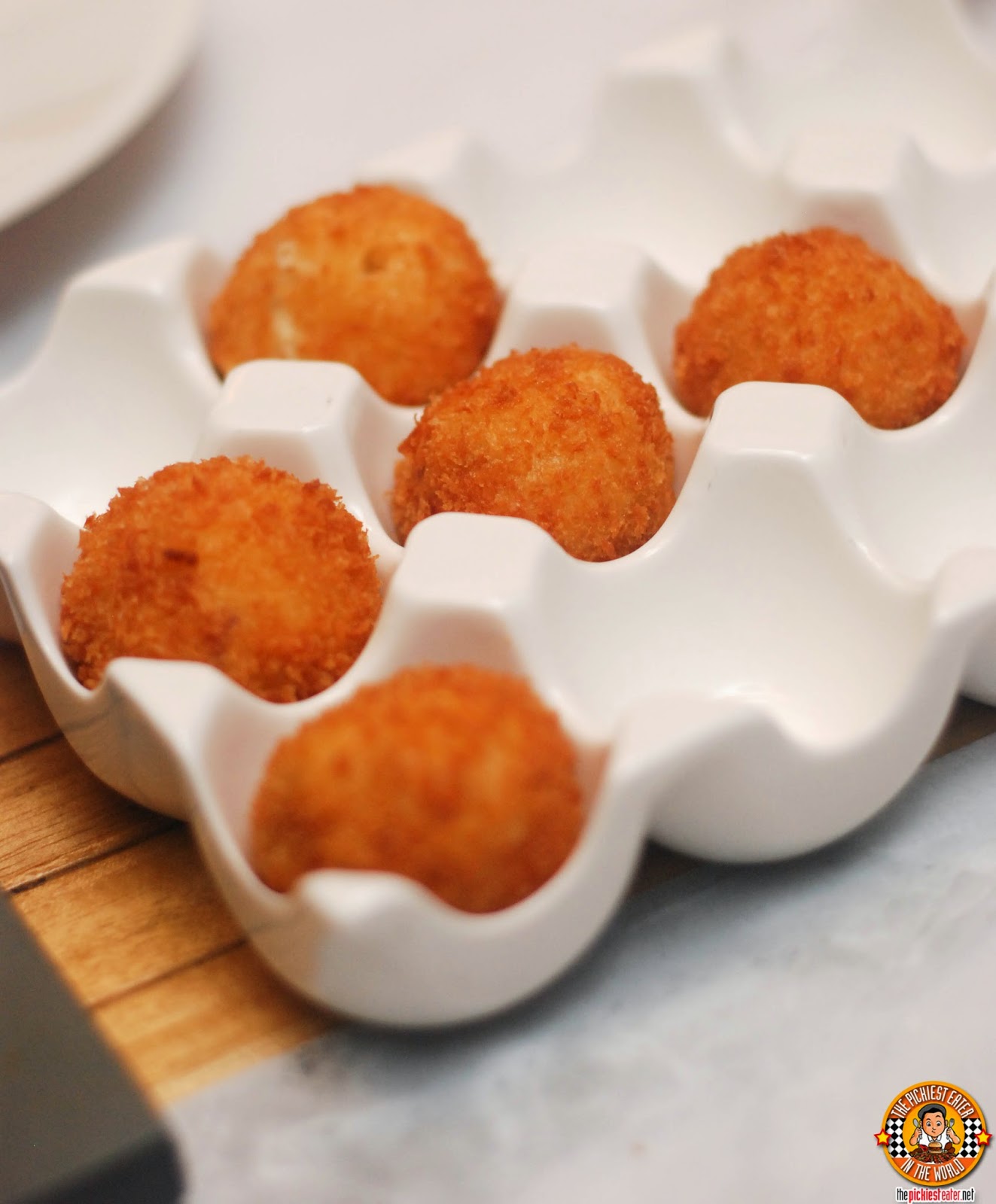 You wouldn't expect a dish as simple as Croquetas De Jamon y Pollo to blow your mind, but Vask's version is mind-blowingly good. The crispy exterior gave way to the unbelievably smooth, creamy mixture of potato, blended with bits of finely chopped jamon and shredded chicken, were like little drops of heaven.

If you love seafood, then you'll be happy to know that there is also a gambas version of this. 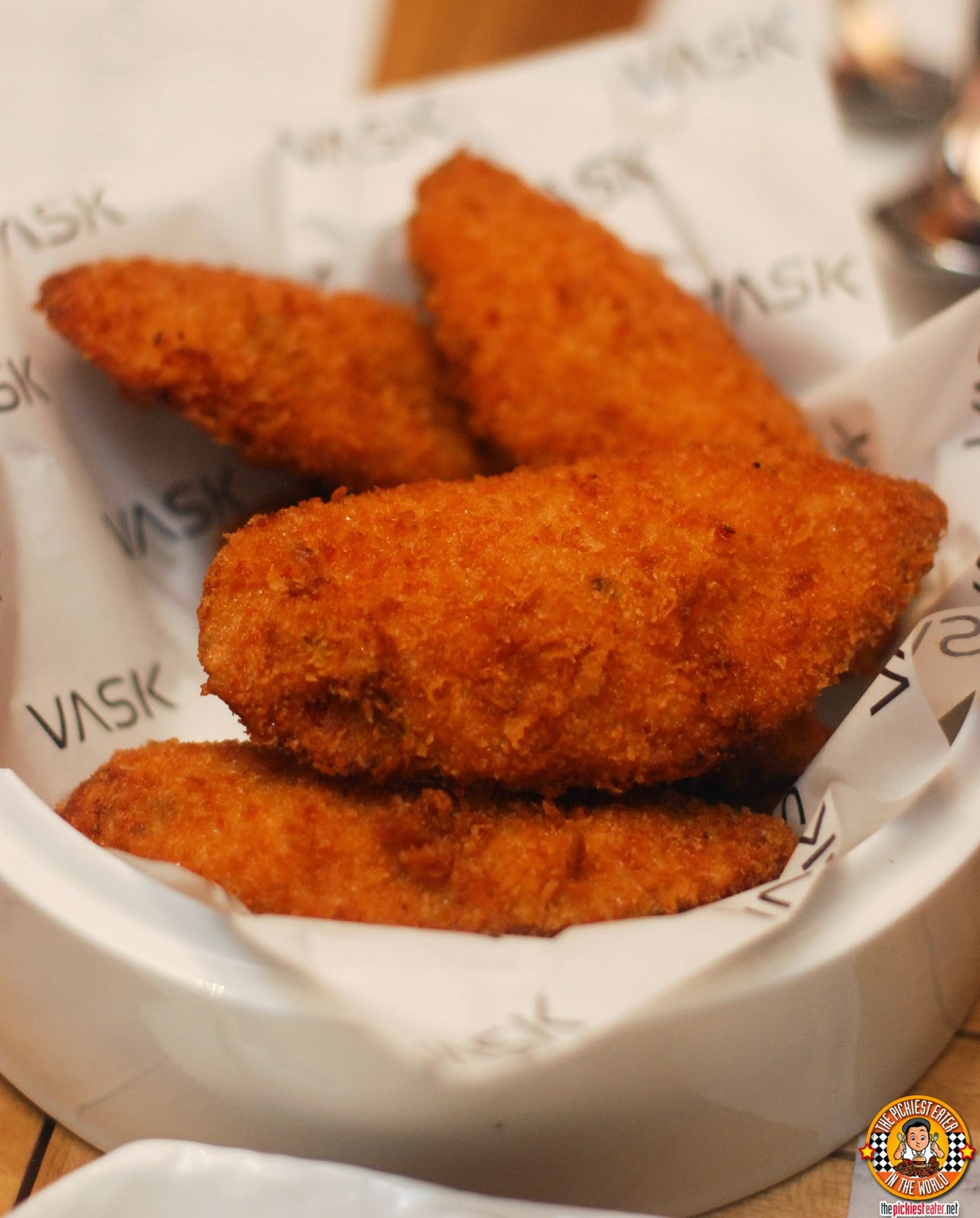 Speaking of seafood, we were treated to a series of seafood dishes to try. I'm not a fan of mussles, but I couldn't help but be intrigued by the inventiveness of the Mejiliones Tigre. The spicy mussels in a half shell, are breaded and deep fried to a golden crisp. The infusion of chilis give the mussels a spicy kick. 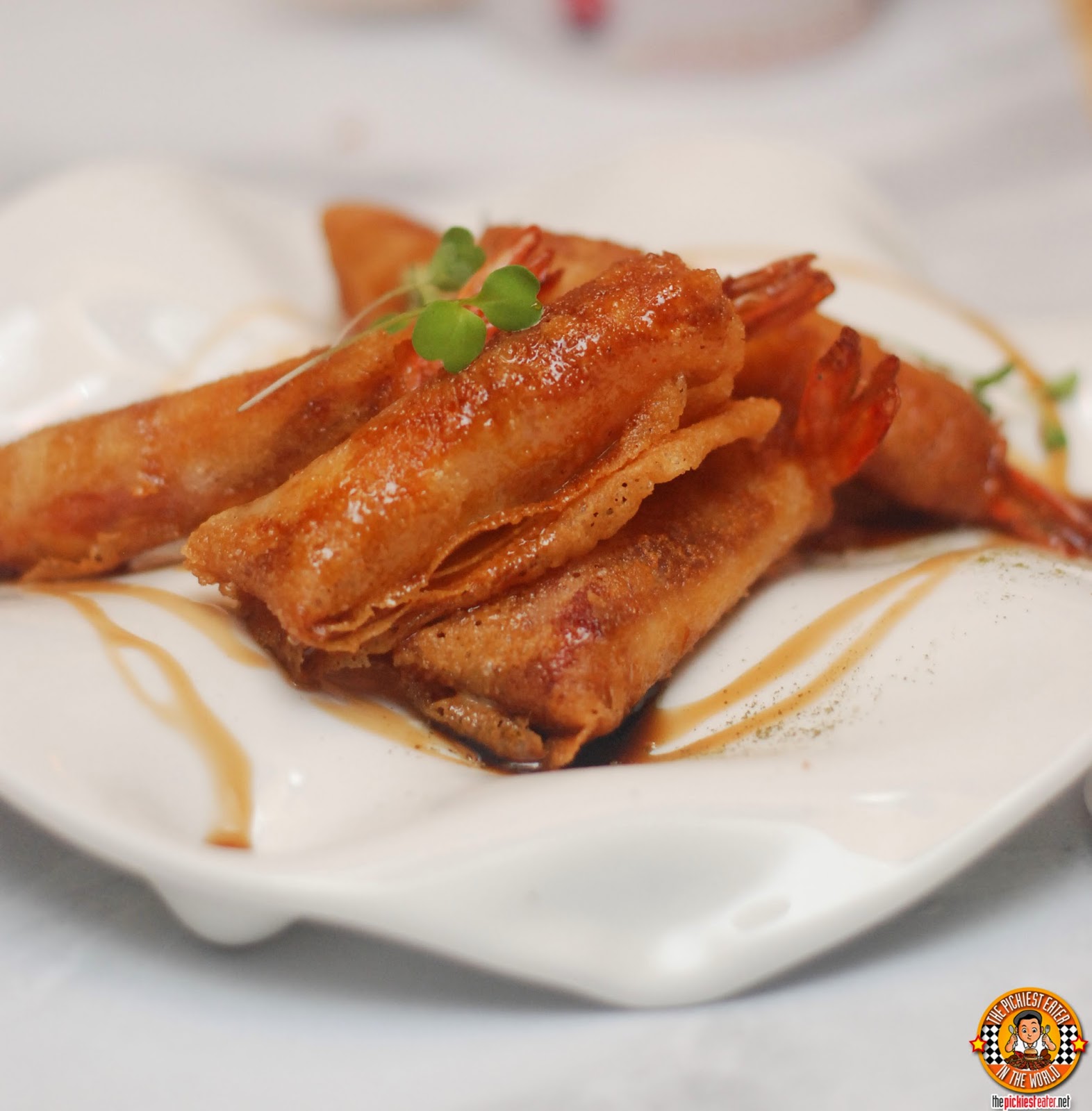 It was very unfortunate that Rina couldn't join us that evening, because she would have loved the Crispy Shrimp (P495). Plump pieces of juicy shrimps, delicately wrapped in flavorful Jamon Iberico, before being wrapped once again in a spring roll wrapper, and deep fried, then drizzled with a tasty Jerez reduction. 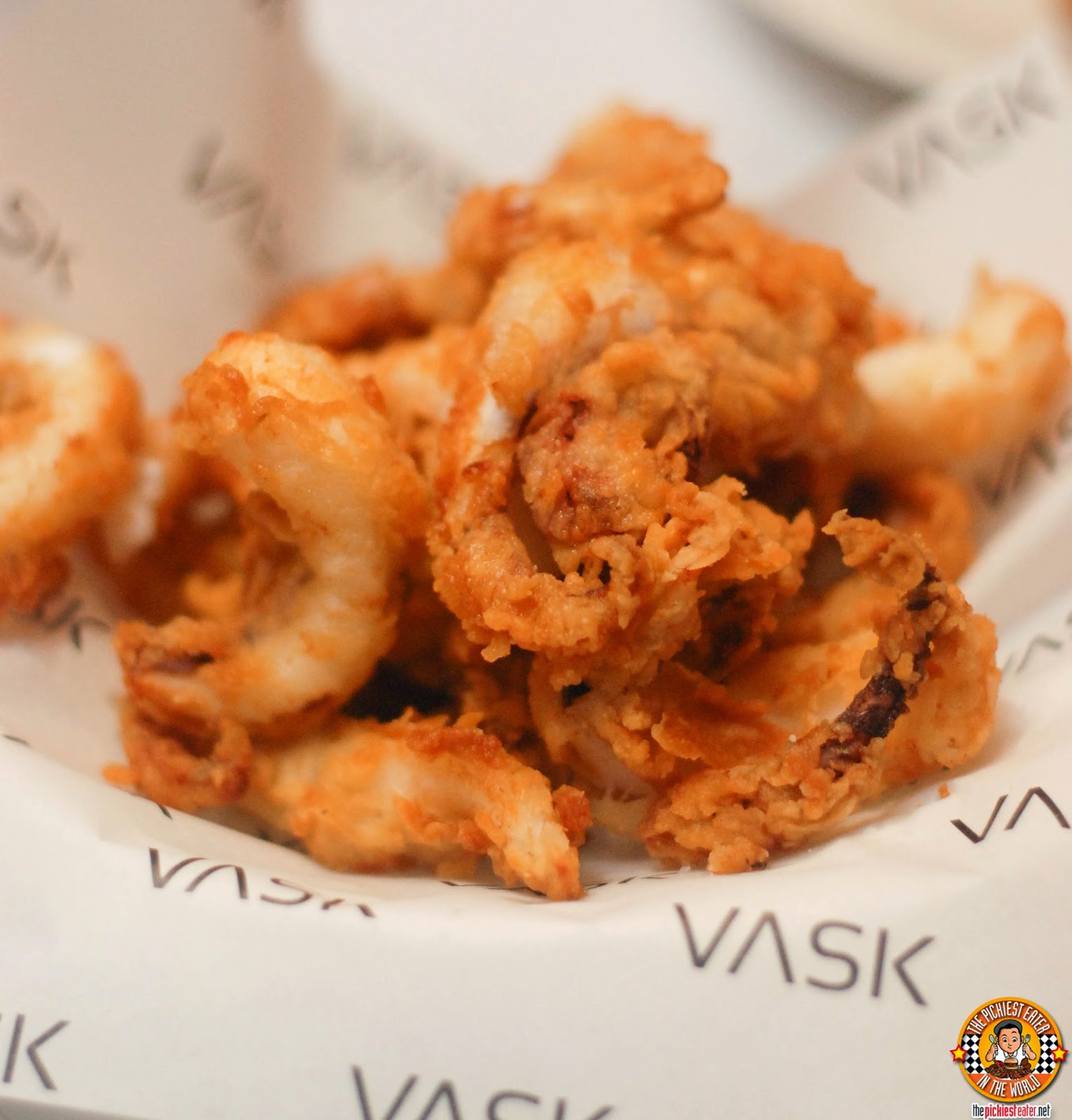 What I thought was "Calamares", was actually Vask's Rabas (P395). The concept is essentially the same -lightly breaded pieces of squid, deep fried- except elevated the Vask way. Seasoned perfectly and served with Basil Mayo. 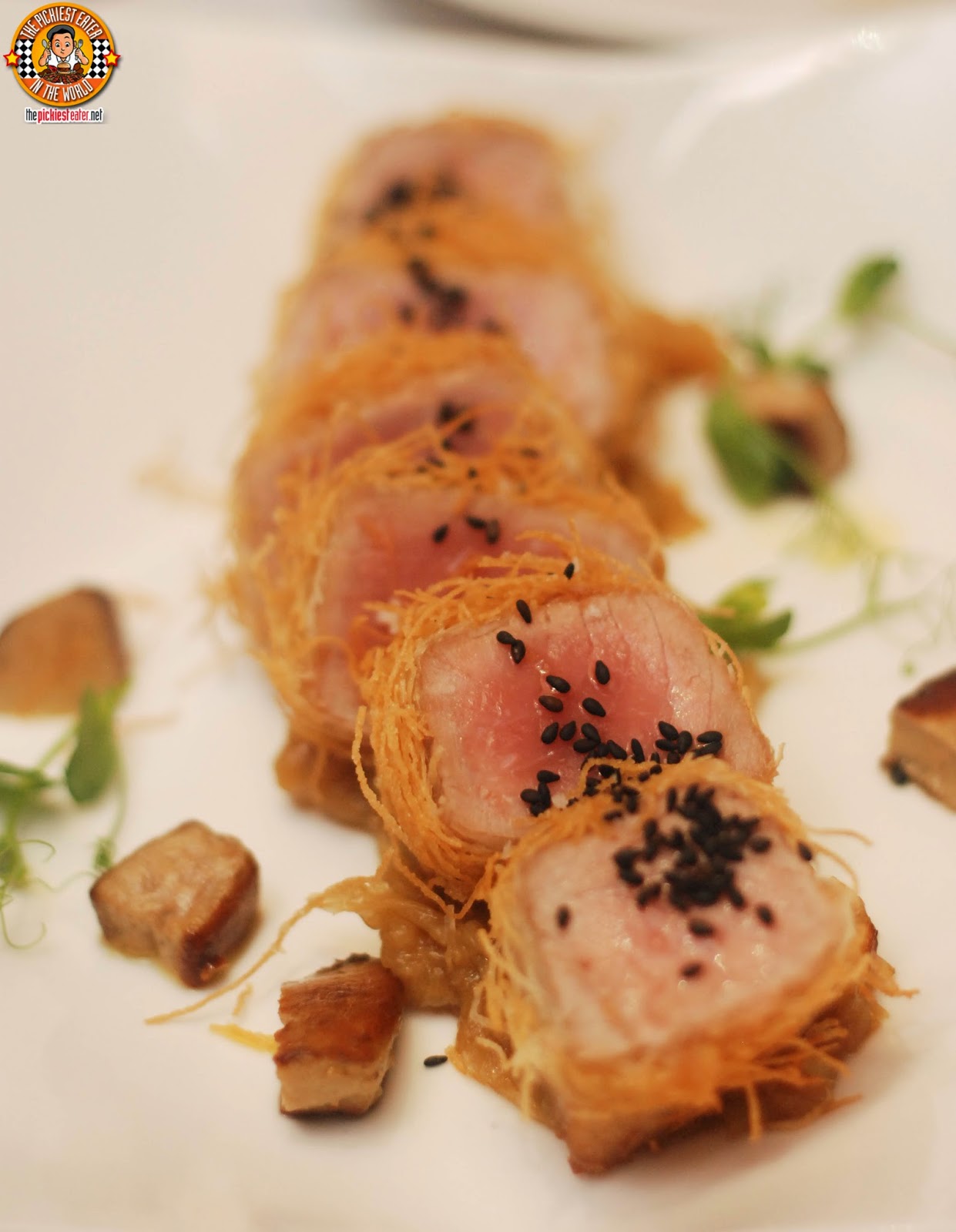 Another seafood dish that was a hit among my friends was the Atun Crujiente, which was slices of crispy Tuna, laying on smothered onions and sauteed foie gras, and topped with black sesame seeds. 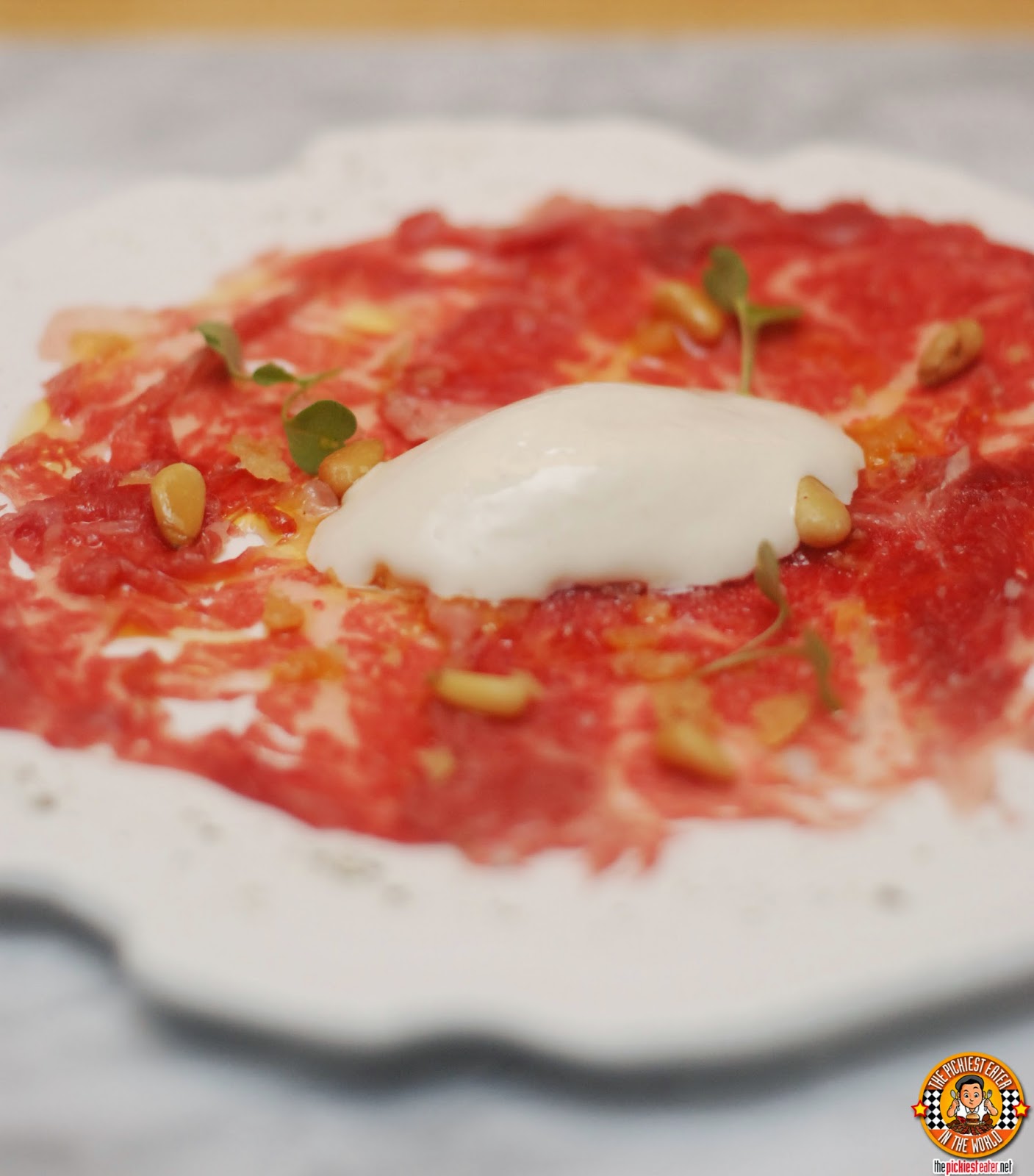 After all that seafood, I was looking forward to a little bit of meat. Fortunately, I got what I wished for. Unfortunately, it was raw. But this was Vask, so I knew I should expect more than just raw meat on a plate.

This was in fact, Vask's Wagyu Capaccio.

Imagine paper thin slices of premium Wagyu beef, Sprinkled with Pine Nuts, a medley of herbs, and crispy parmesan. Nestled in the center of the bed of raw beef, is a very unique parmesan ice cream, that has a light tartness, combined with a gentle touch of creaminess, that brings an entire dish- that doesn't seem to make sense at first- together in perfect harmony. 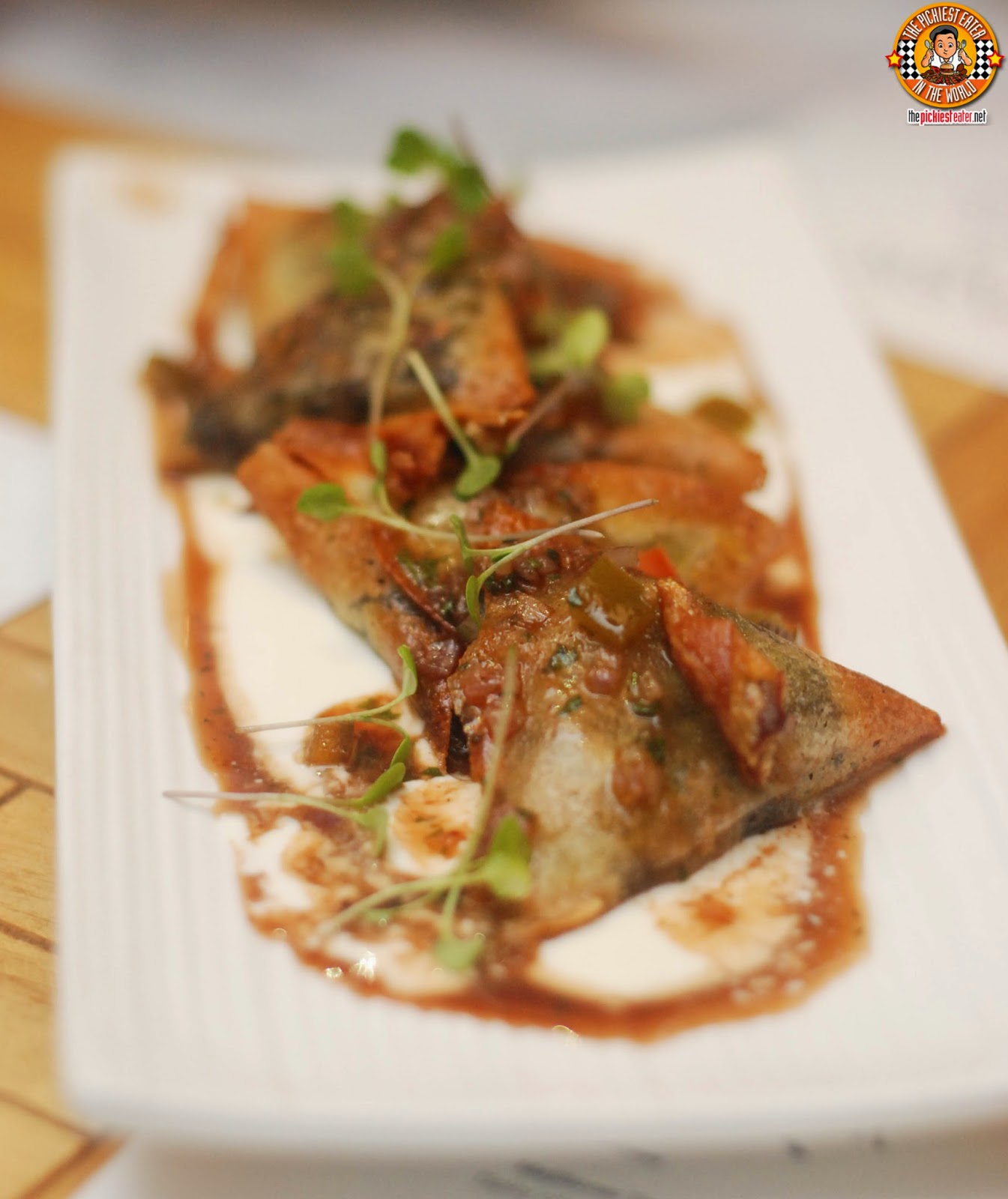 The Carnitas was more along the lines of what I was looking for. I couldn't get enough of these magical little triangles filled with crispy pigs ear, then drizzled in a tangy Orange Cilantro. 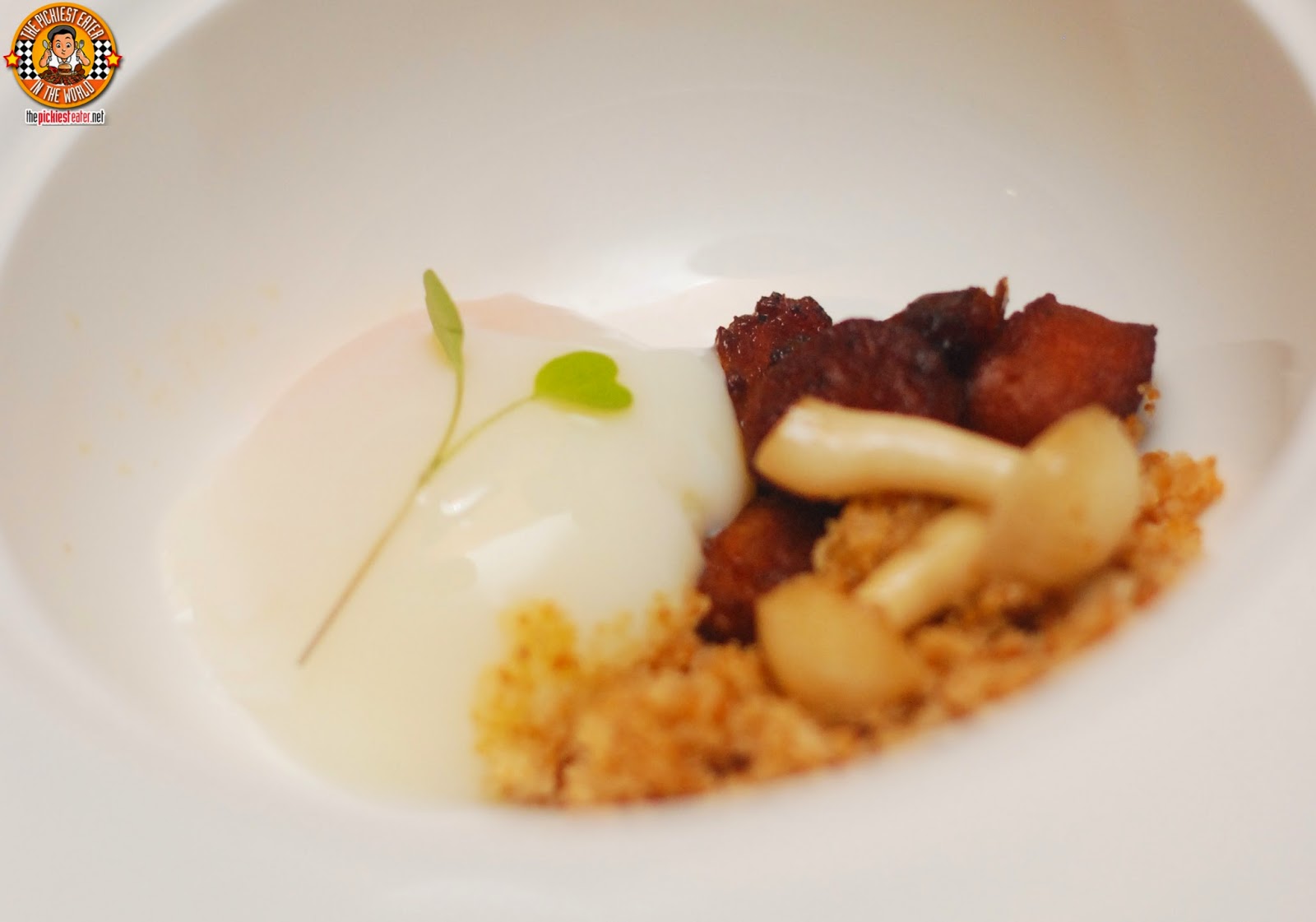 The Huevos con Txistorra (P290) was another highly creative dish that I enjoyed at Vask. It's a somewhat deconstructed dish, featuring an incredibly delicate Sous Vide Egg, Chistorra Chorizo, Mushrooms, Dates, Breadcrumbs, meticulously arranged on the plate, then sprinkled with truffle oil. 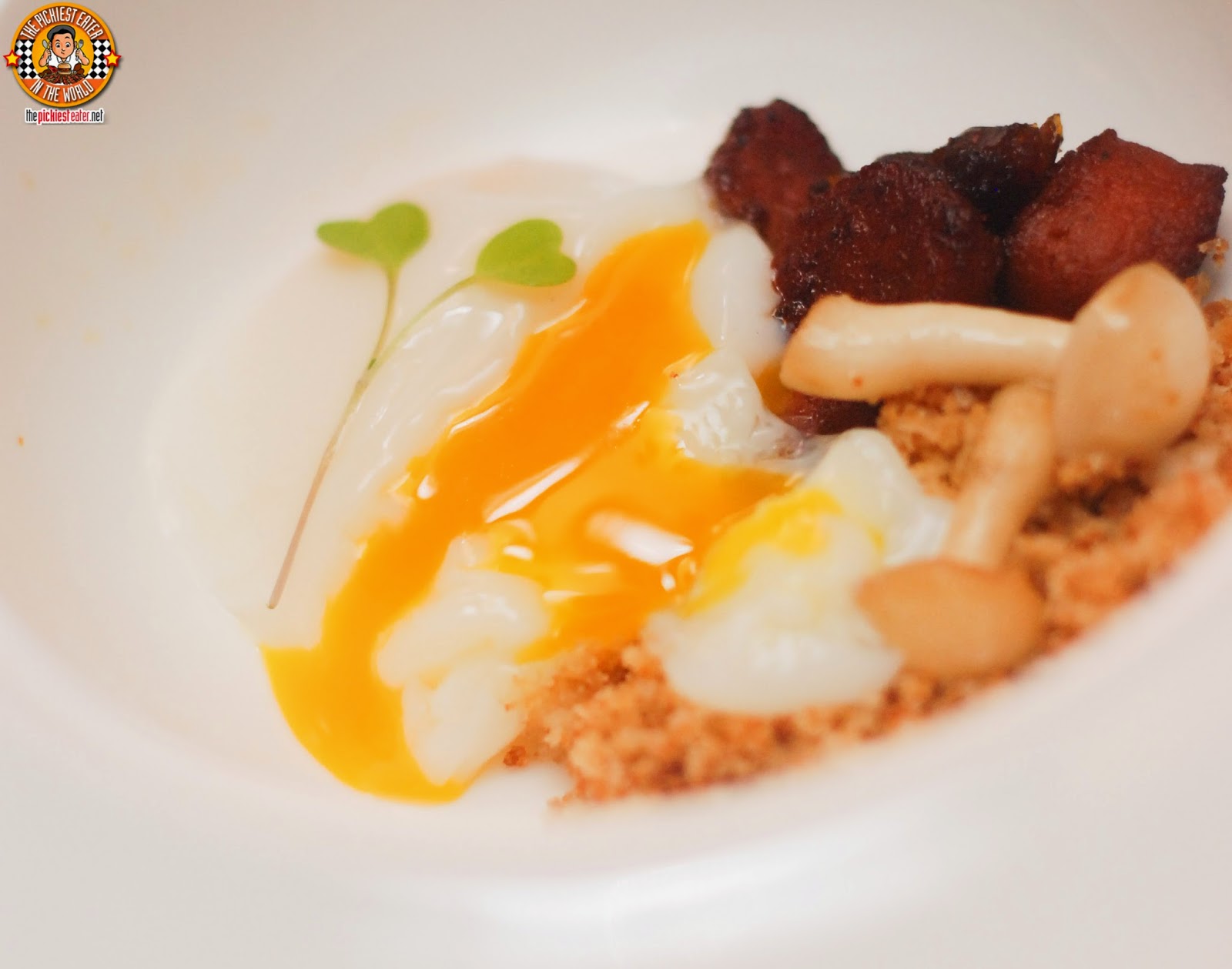 As pristine as the plate looks, the fun is when you bring in the chaos, and mash everything up together. The play on the flavors, particularly from the robust zing of the Chorizo which is eased onto your palate by the creamy egg. 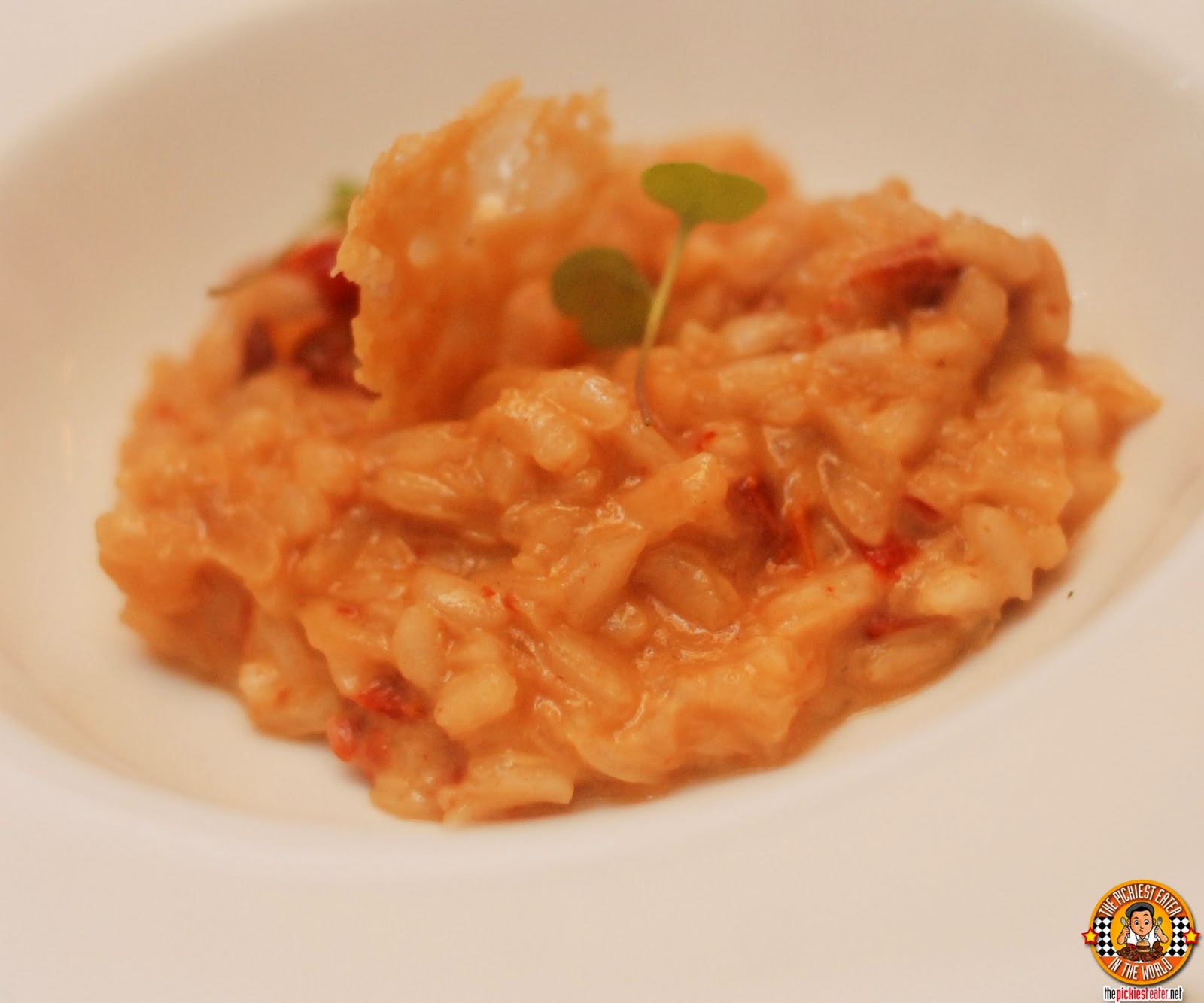 The Mushroom Risotto was cooked to a perfect Al Dente, but the flavor threw me for a bit of a loop, as I was expecting the usual cream based Mushroom Risotto. But this had a vibrant touch of acid to go with the earthy flavor of the mushrooms, giving a new twist to a classic. 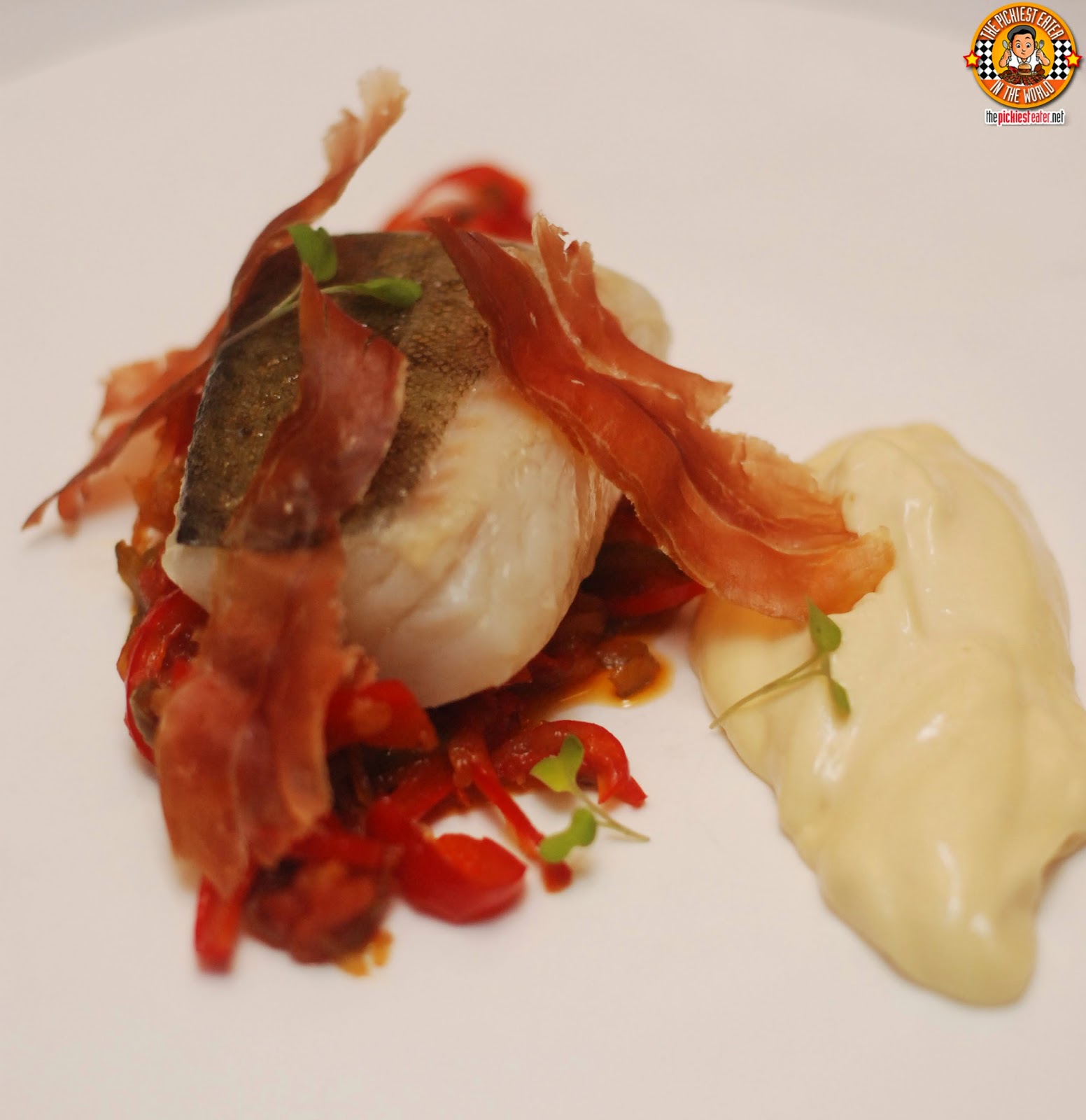 Growing up, Bacalao was something that I would only have during Holy Week. My yaya would whip up a tomato based "Bacalao Guisado" that I didn't care for very much. I remember how I used to dread Holy Week, because of the absence of meat, and the presence of that dish.

Perhaps if my beloved yaya served something along the lines of Vask's Bakalao Confitade, going on a lenten meat abstinence would have been so much easier.

A wonderful slab of of perfectly cooked Bacalao confit topped with paper thin strips of crisp Jamon Iberico, and served on a bed of pipermaela and a side of Garlic Aioili. 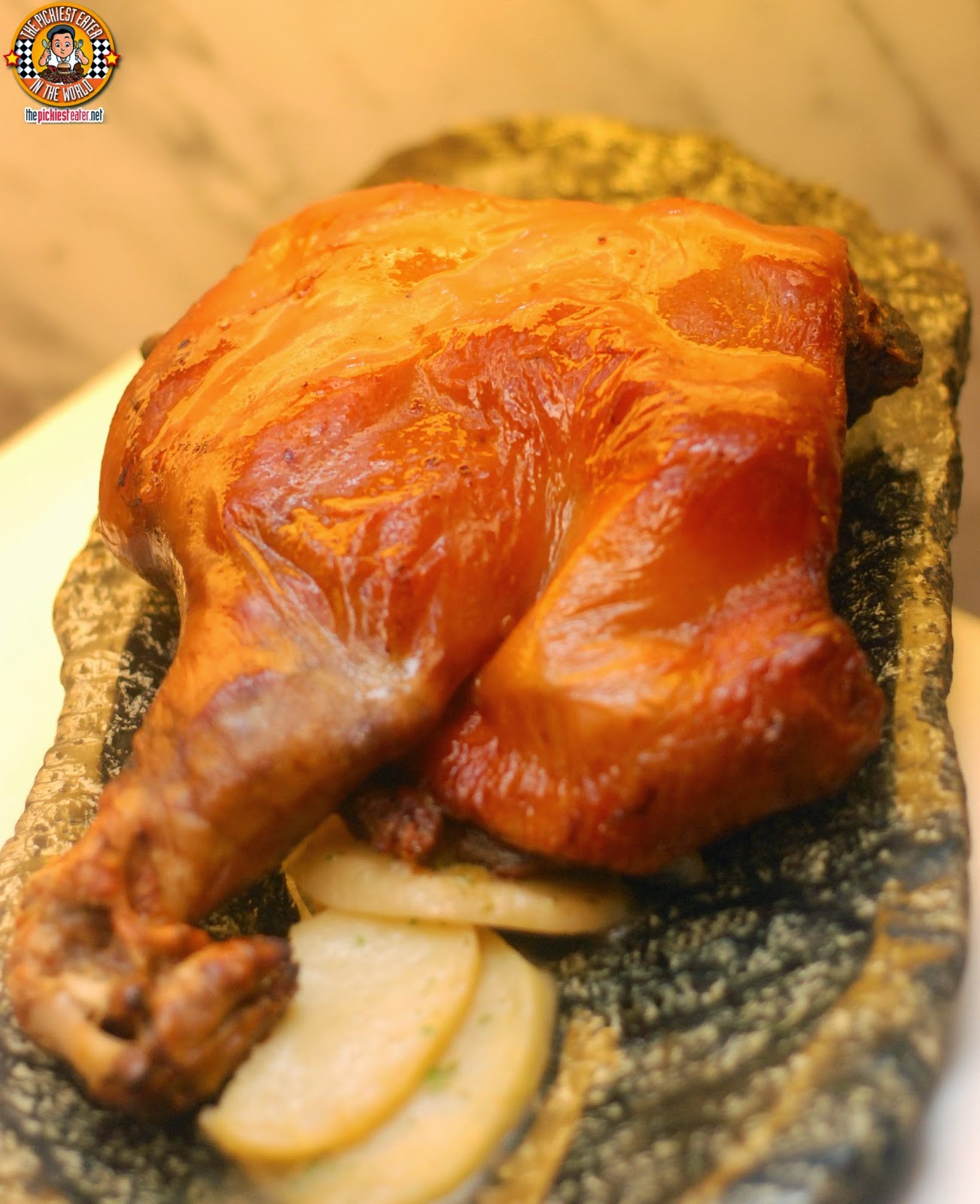 All jaws dropped when the Cochinillo (P2,750 Quarter) was brought out into the Vask Dining Room. The skin just gleamed in the light, and even just by looking at it, you could tell that it was one juicy pig. 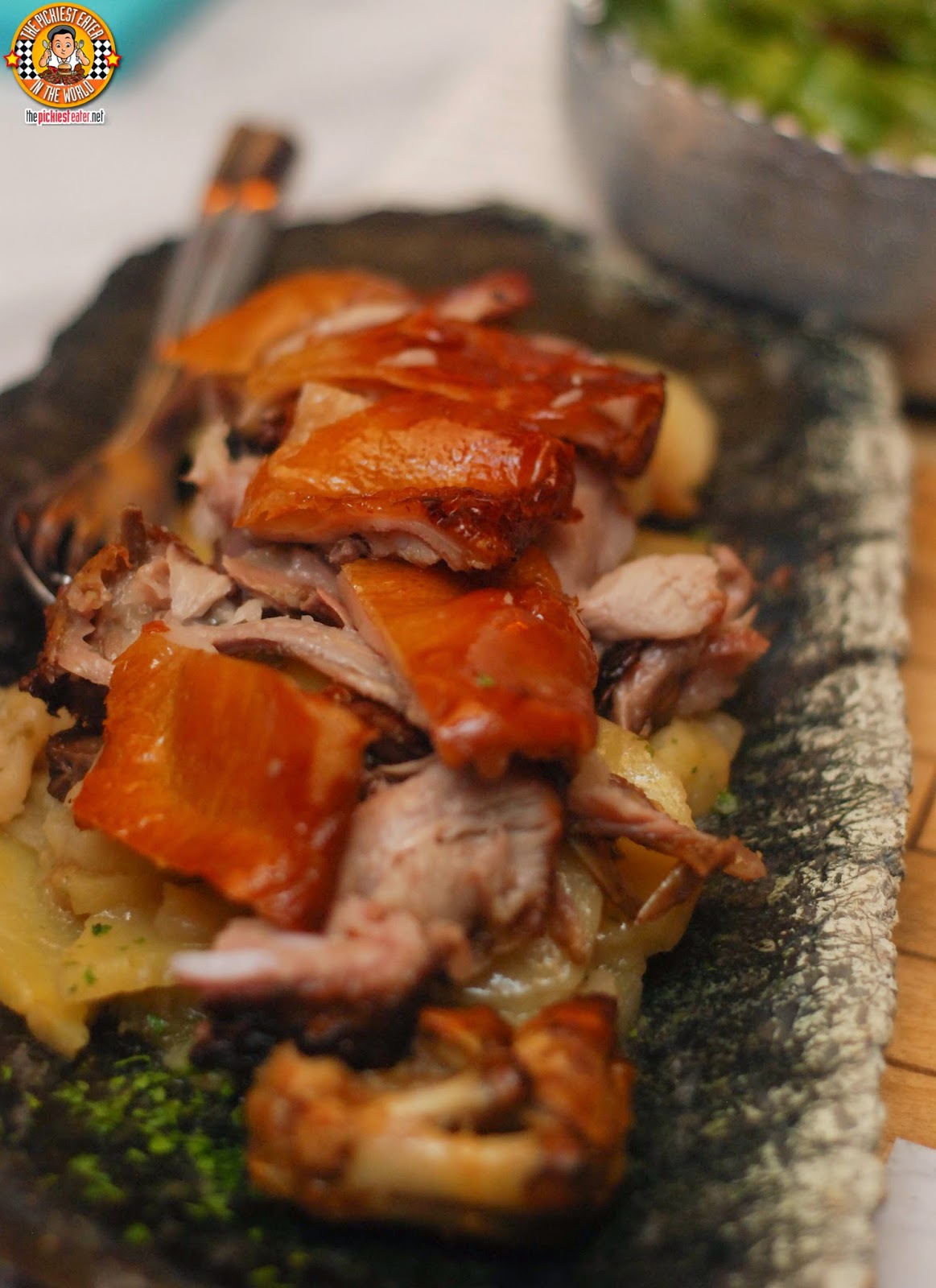 The skin was gloriously crispy, and the flavorful meat had a stunning lining of fat, but never becoming too greasy. 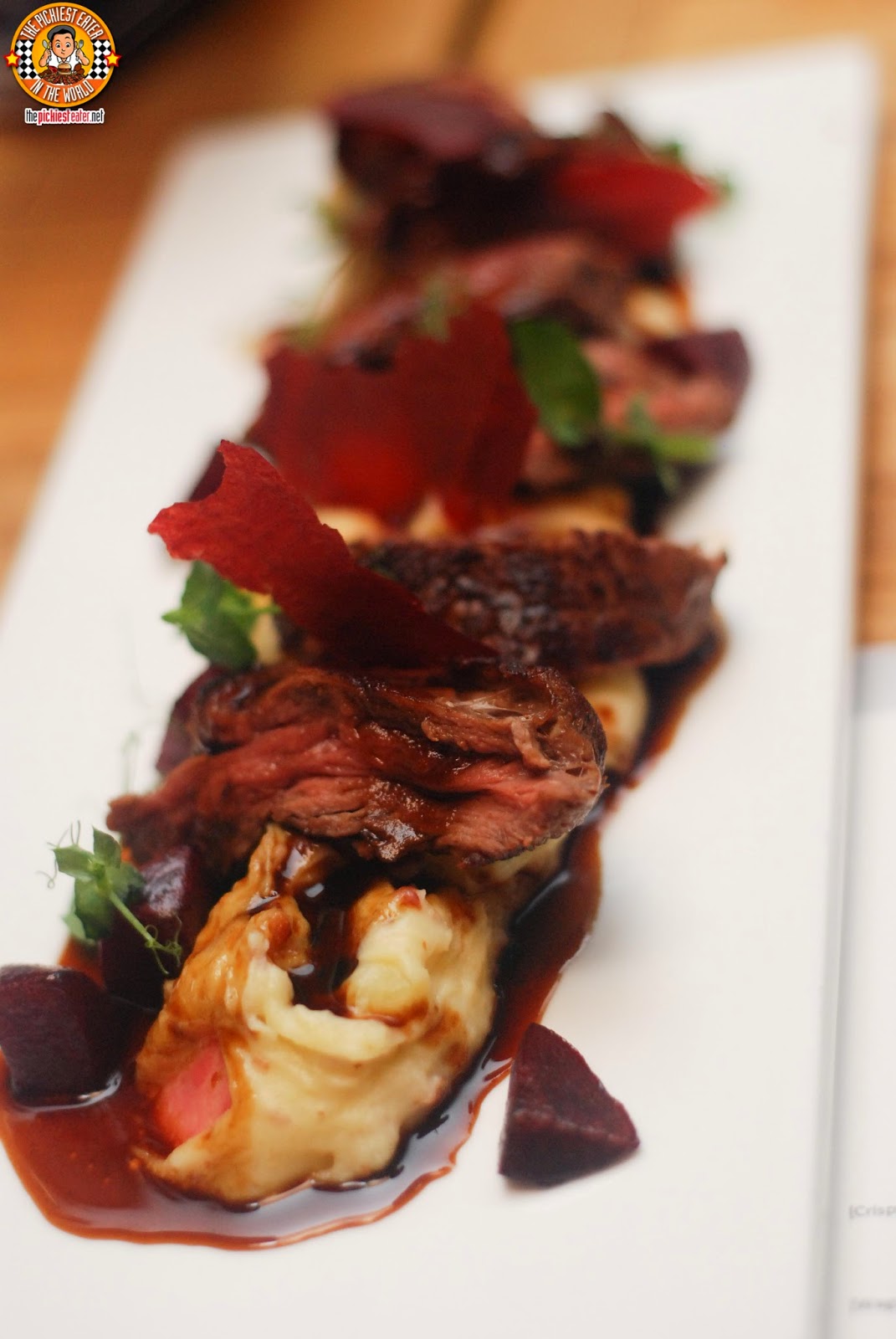 Just when I was still recuperating from the awesomeness of the Cuchinillo, Chef Chele served up his knockout punch.. The Tenderloin.

I've said this time and time again - I am not a fan of that particular cut, I must say, I must make an exception with Vask. The meat remains moist and works perfectly with the sweet beet root flakes, and doused with a fragrant Port wine demiglace. What makes this even more perfect for me, is that the meat rests on a fluffy bed on Bacon Mashed Potatoes. 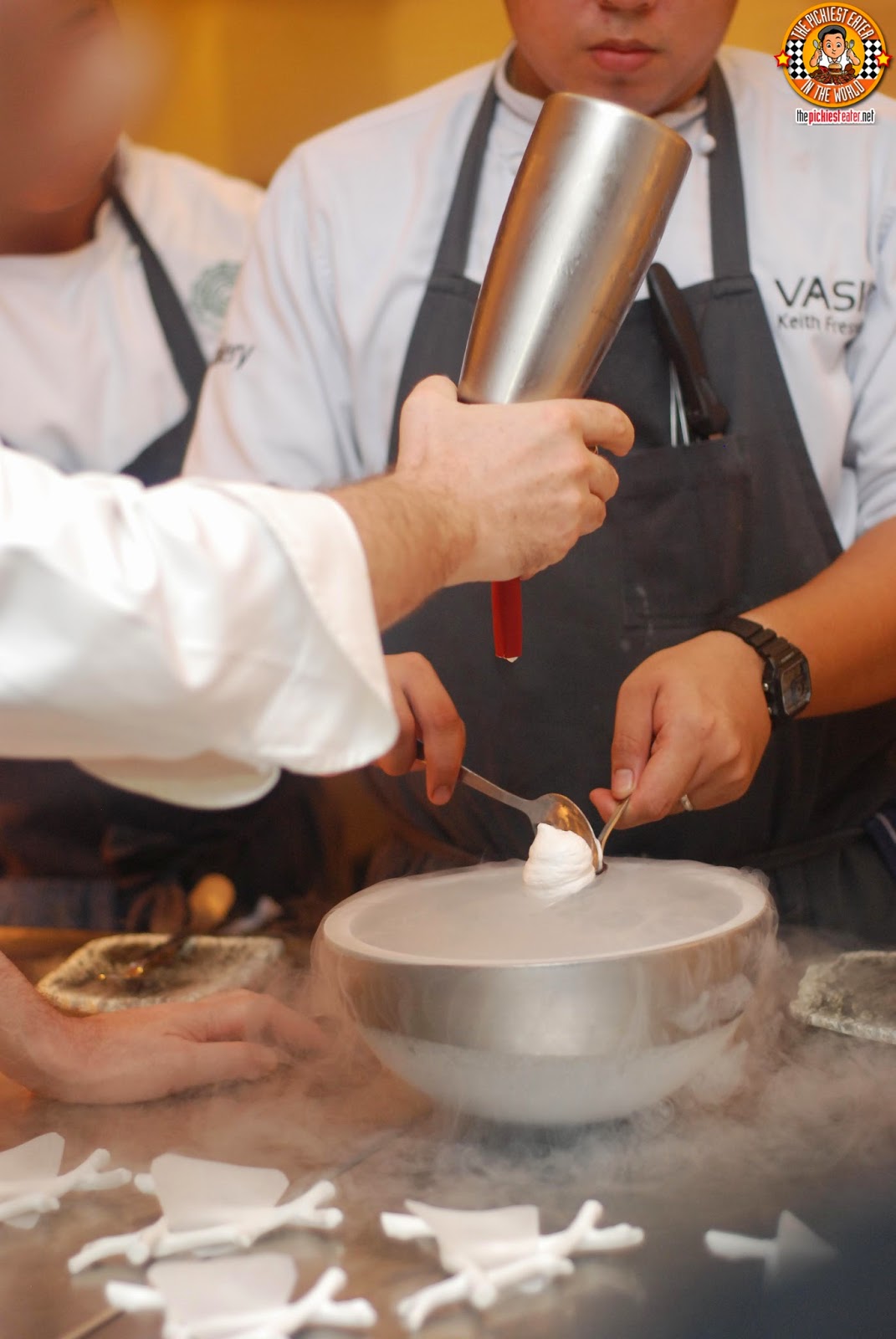 After all that, we moved to the Gallery Vask, for some Palate Cleansing dishes. Gallery Vask is where Guests may book limited seating Degustation dinners that can go up to 14 courses.

Chef Chele showed off his prowess in Molecular Gastronomy much to the delight of us who rarely get to see that type of preparation done here in the Philippines. 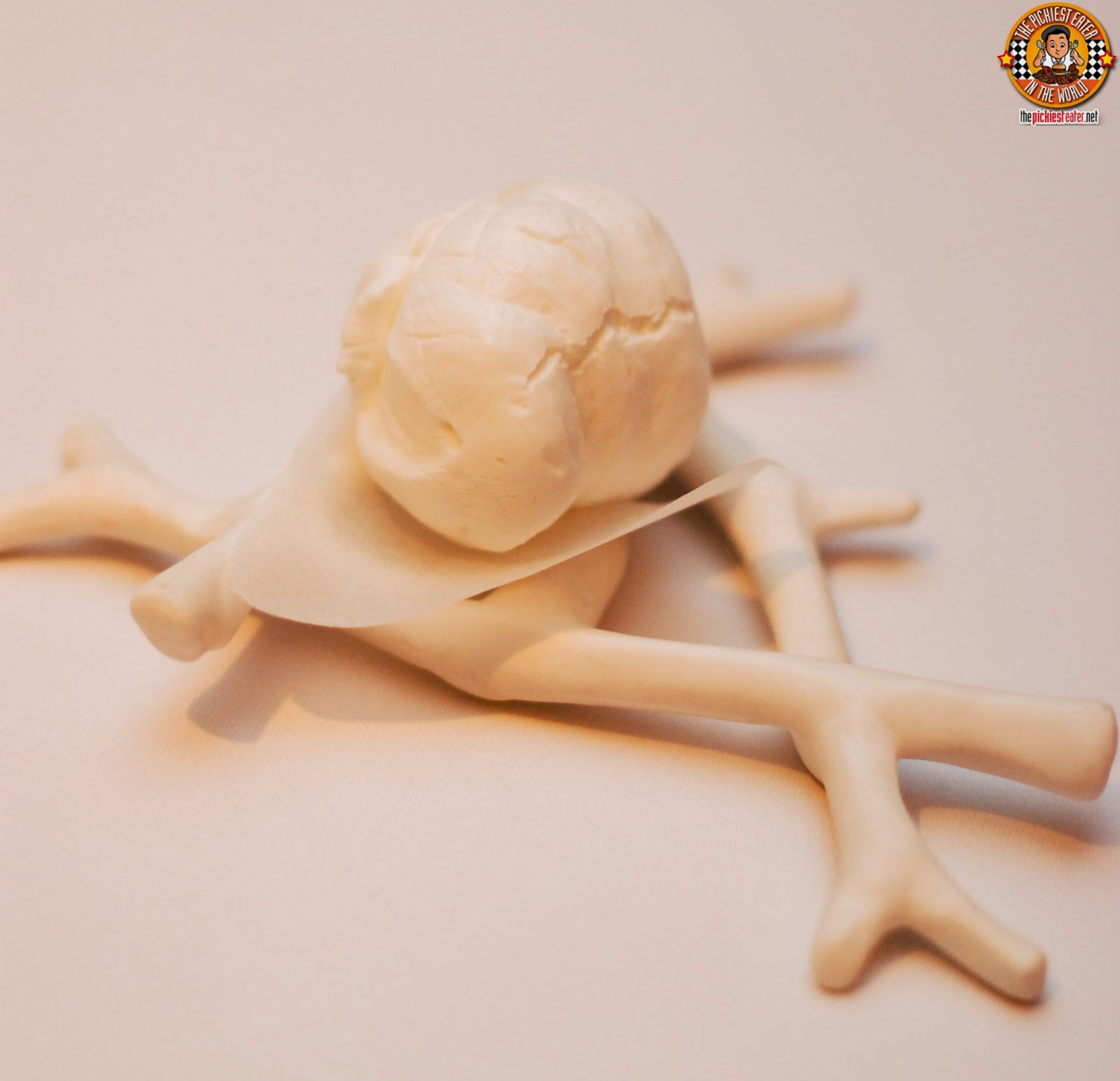 We watched in awe as Chef Chele took a rich, coconut cream foam, is dipped into a bowl of liquid nitrogen, freezing it instantaneously, right before our very eyes. The result? The "Palm Crisp", or Vask's version of a coconut sorbet.. But definitely a sorbet unlike any other you've ever had before. 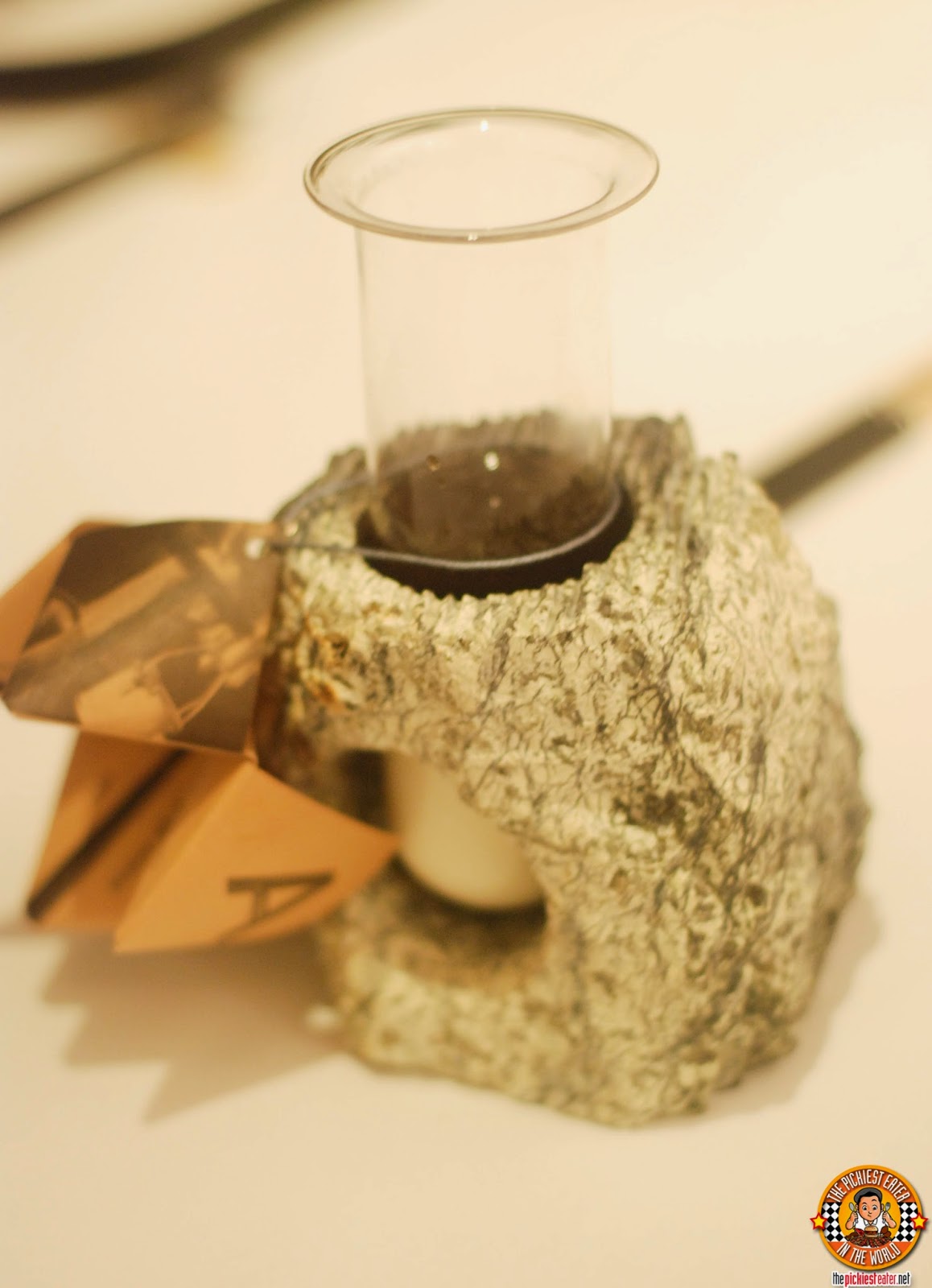 You wouldn't think that a street food as mundane as "Taho" would be served in a restaurant such as Vask, right? But Chef Chele saw the challenge in coming up with a Taho that would excite his diners. 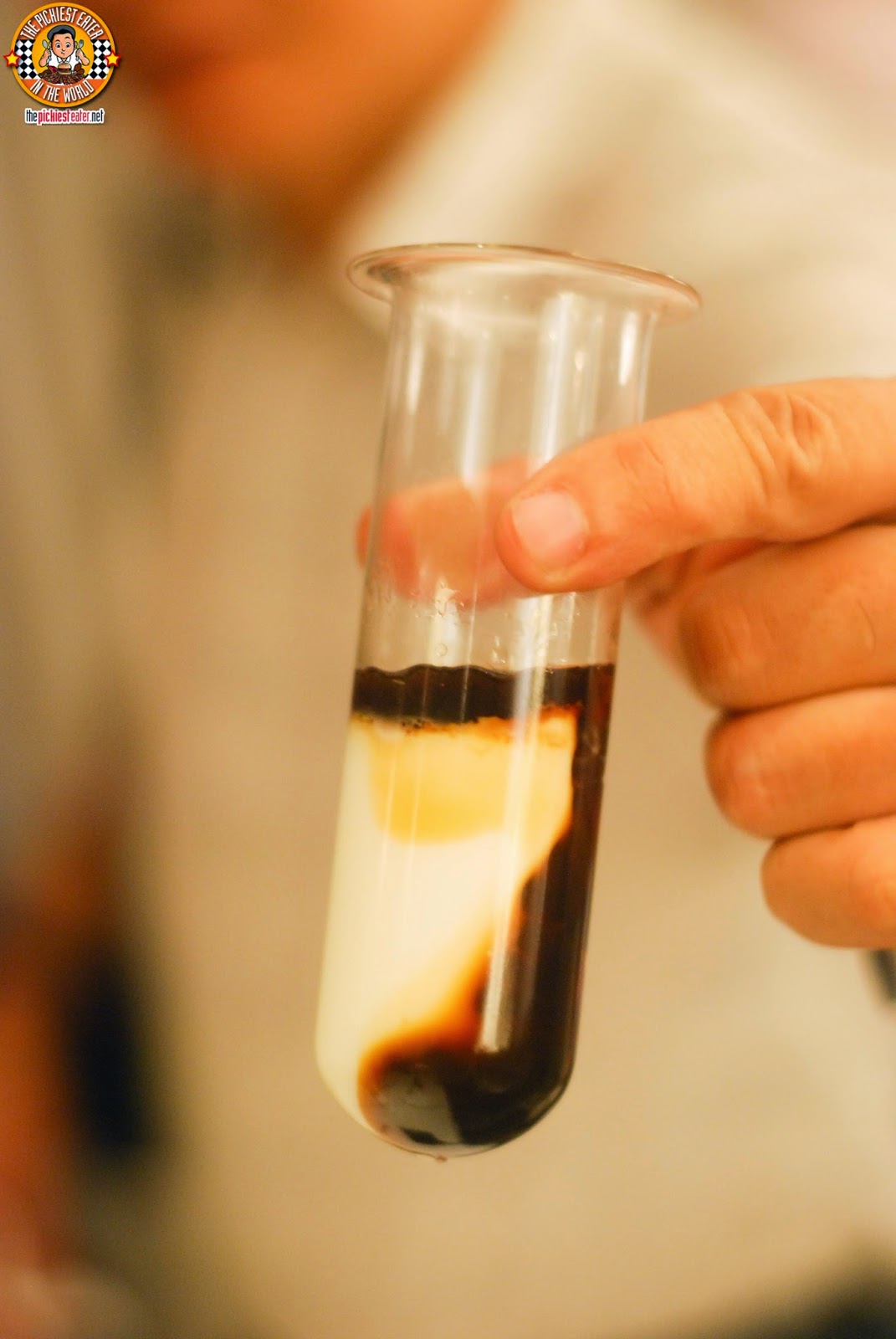 Even from the presentation alone, you could see how Vask's Taho was going to be a very creative dish. Test tubes are filled up Sheep Milk Tofu, instead of a regular cup or glass. The tofu was much silkier than what you would get from the street, not to mention much creamier. The caramelized tapioca and the sweet ginger essence, round out the components that takes your average, ordinary taho to all new heights.

As the evening wound down, we finally settled down at The Curve, yet another area at Vask that can be booked for private events. The Curve has the most playful environment of all the concepts of Vask, but unfortunately, due to technical difficulties (my camera broke down), I was unable to capture it on film.

I managed to take some photos of some of the dessert dishes, using my trusty iPad, so please forgive the picture quality. 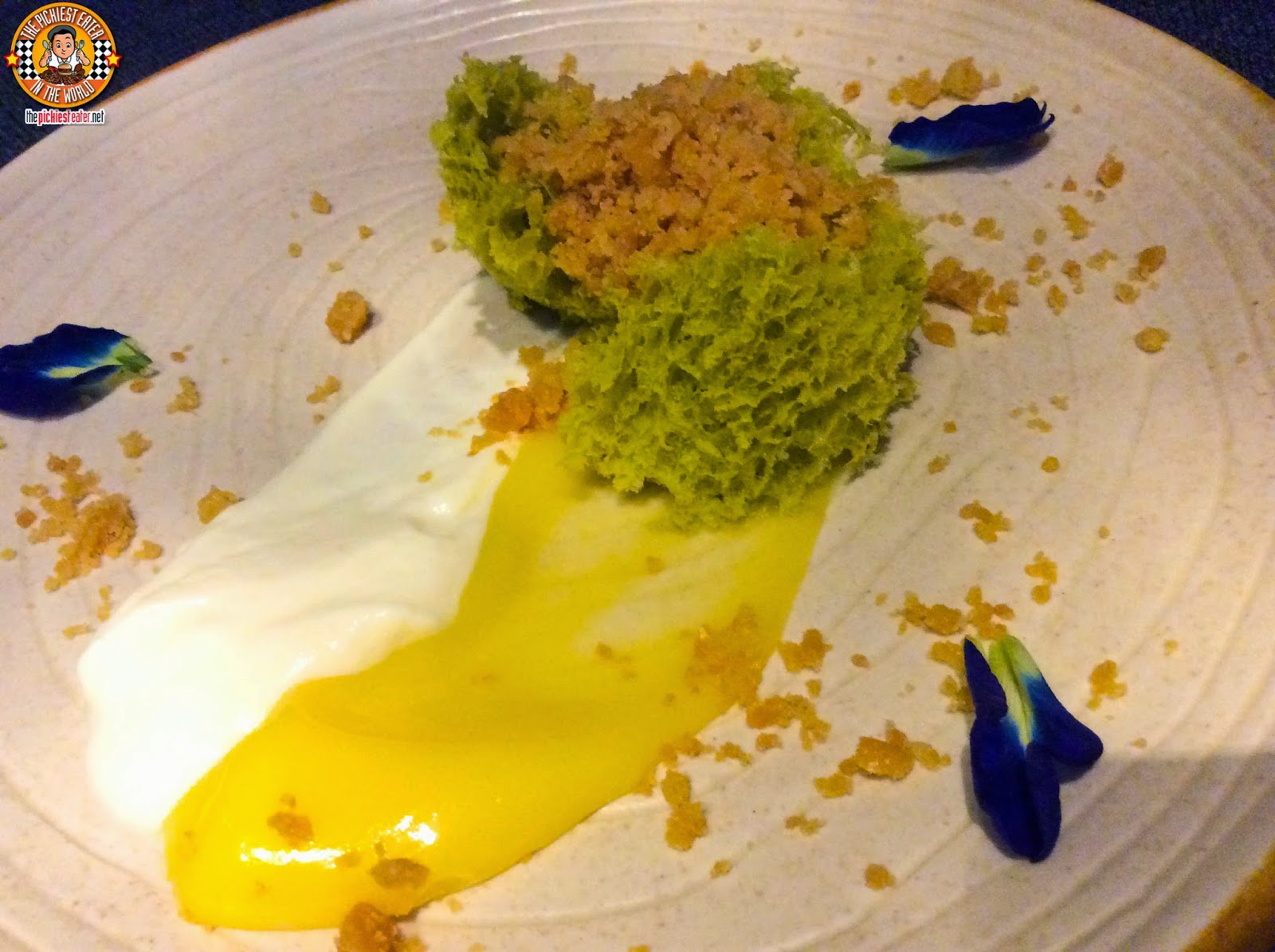 The Deconstructed Lemon Cake (P295) had a moist pistachio sponge cake, topped with sprinklings of crushed Golden biscuits, with smearings of Lemon Custard and Green Yogurt mousse on the side. 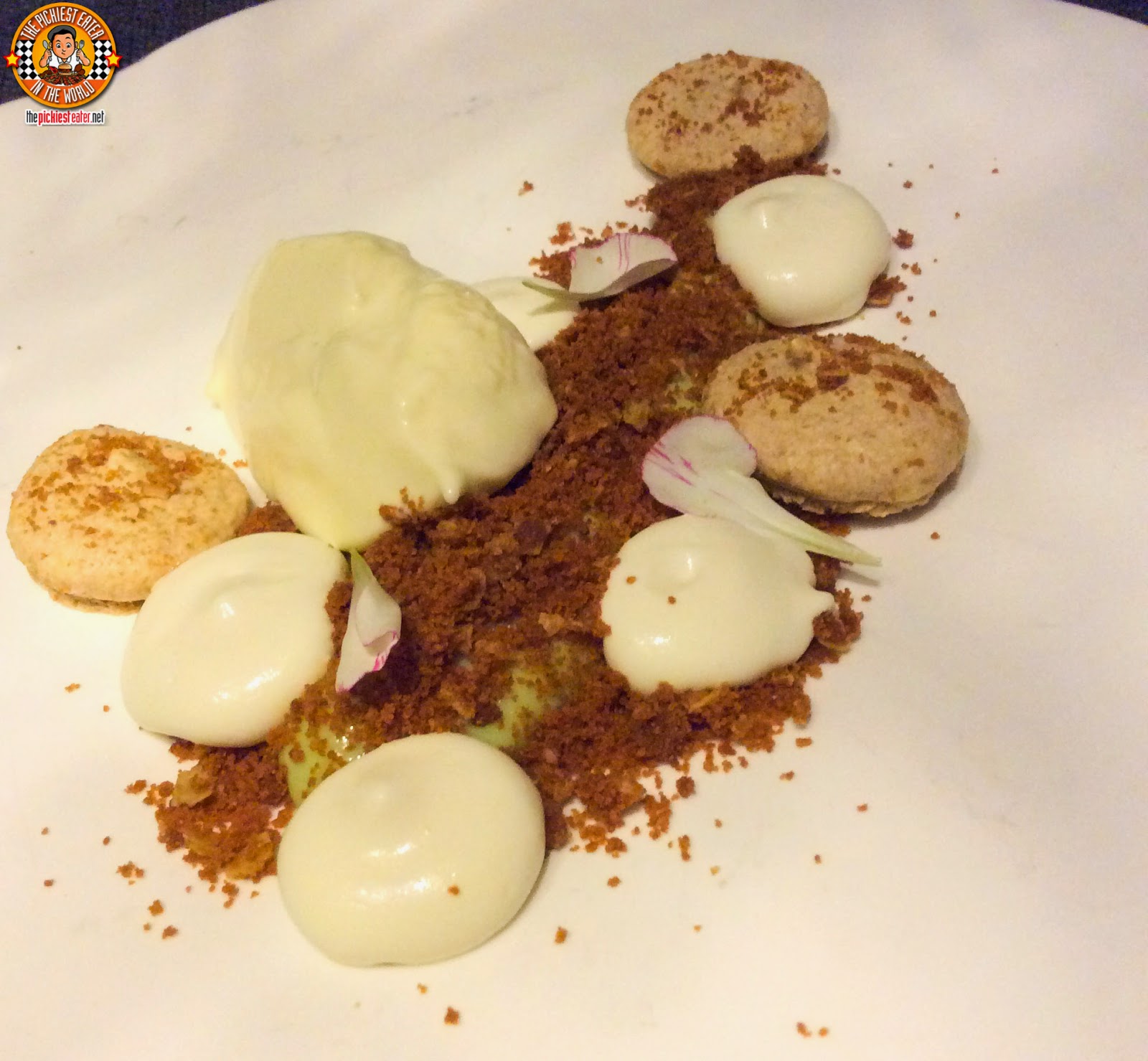 Another dessert I was able to take was the Calamansi Tart, which was served with a Cream Cheese Ice Cream. This had a great balance between sour and creaminess, but elegantly presented in the high standard that Vask has become known for. 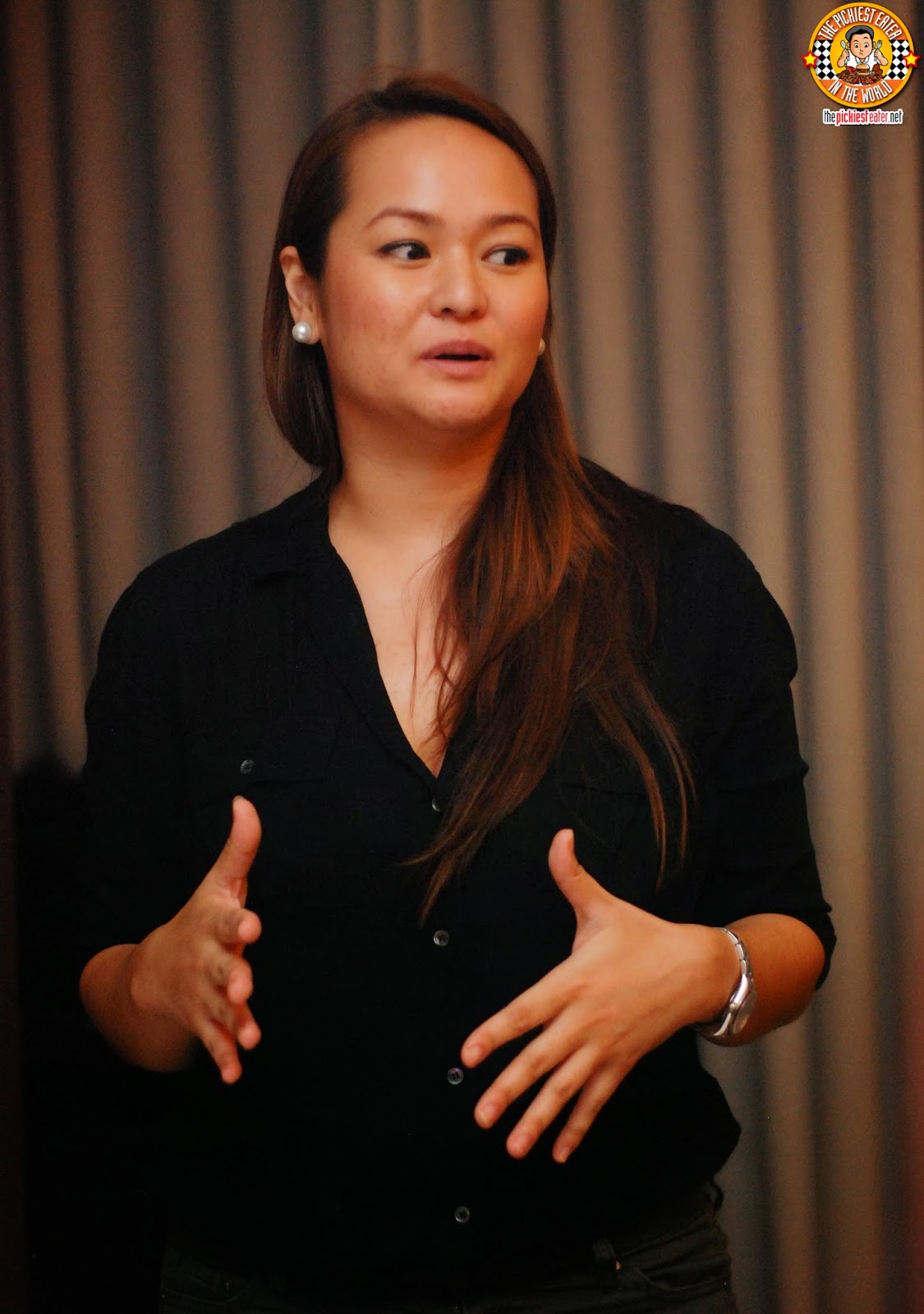 It was a truly wonderful night of dining of world class food and the great company of friends. It was even more amazing because I was able to spend some time with the lovely Jean Salonga Fernando, the blogger behind Trip or Treats, and co-owner of Vask. I don't know if you know this, but Trip or Treats of the Blogs that really inspired me to start my own, so finally getting to sit down with her for a lovely evening and hearing her ToT stories firsthand was really fun! 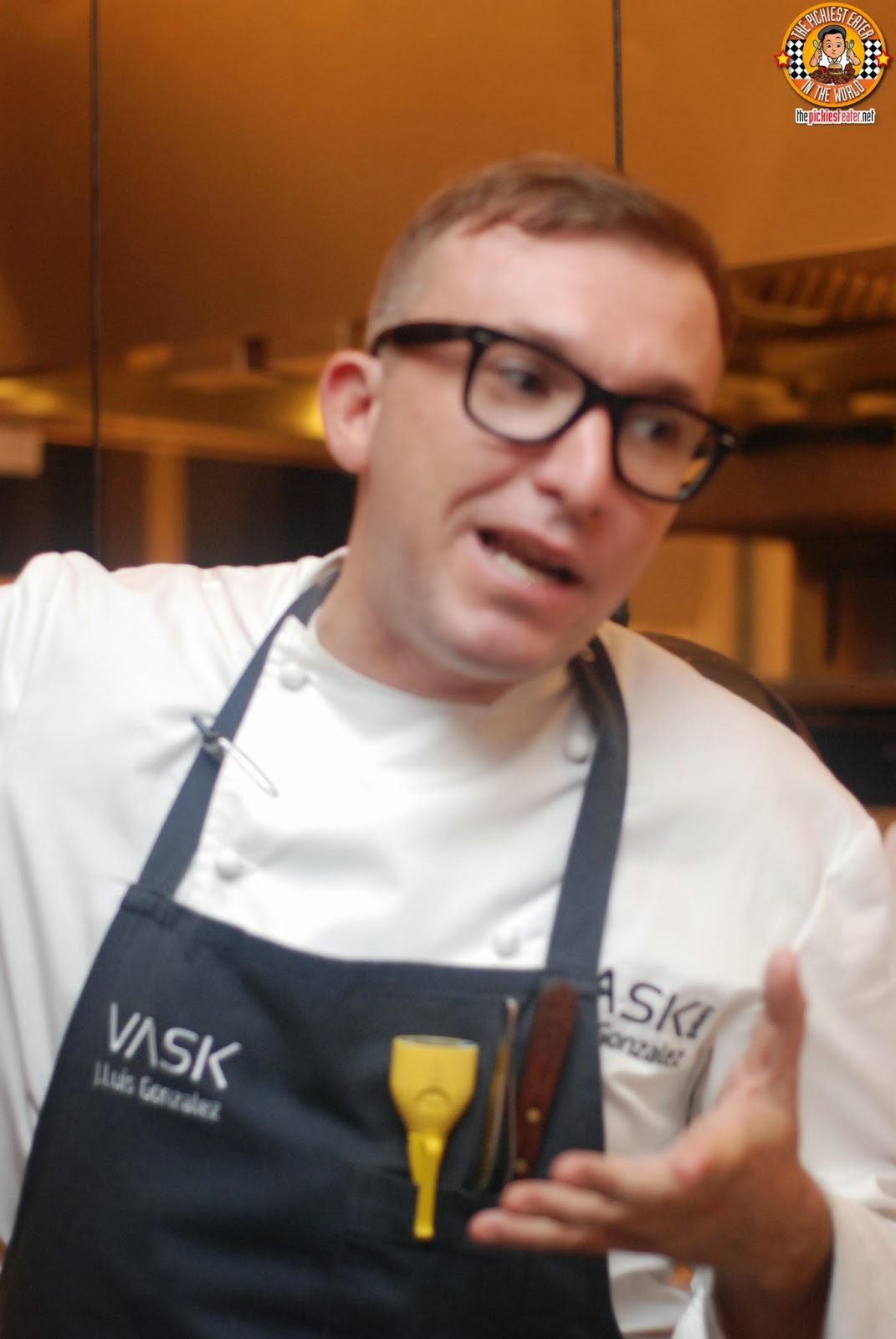 It was an honor to dine on the food prepared by a world class talent, such as Chef Chele. The dishes that we tried were truly of another level, and Vask definitely deserves all the accolades it has been receiving in its short existence. I'm sure we can expect ever bigger things from Vask in the future!

Rina wasn't with me, so you're going to have to forgive the pictures. Not to mention my camera flash kinda conked out on me by the end of the meal, so I wasn't able to take shots of the interiors. :(