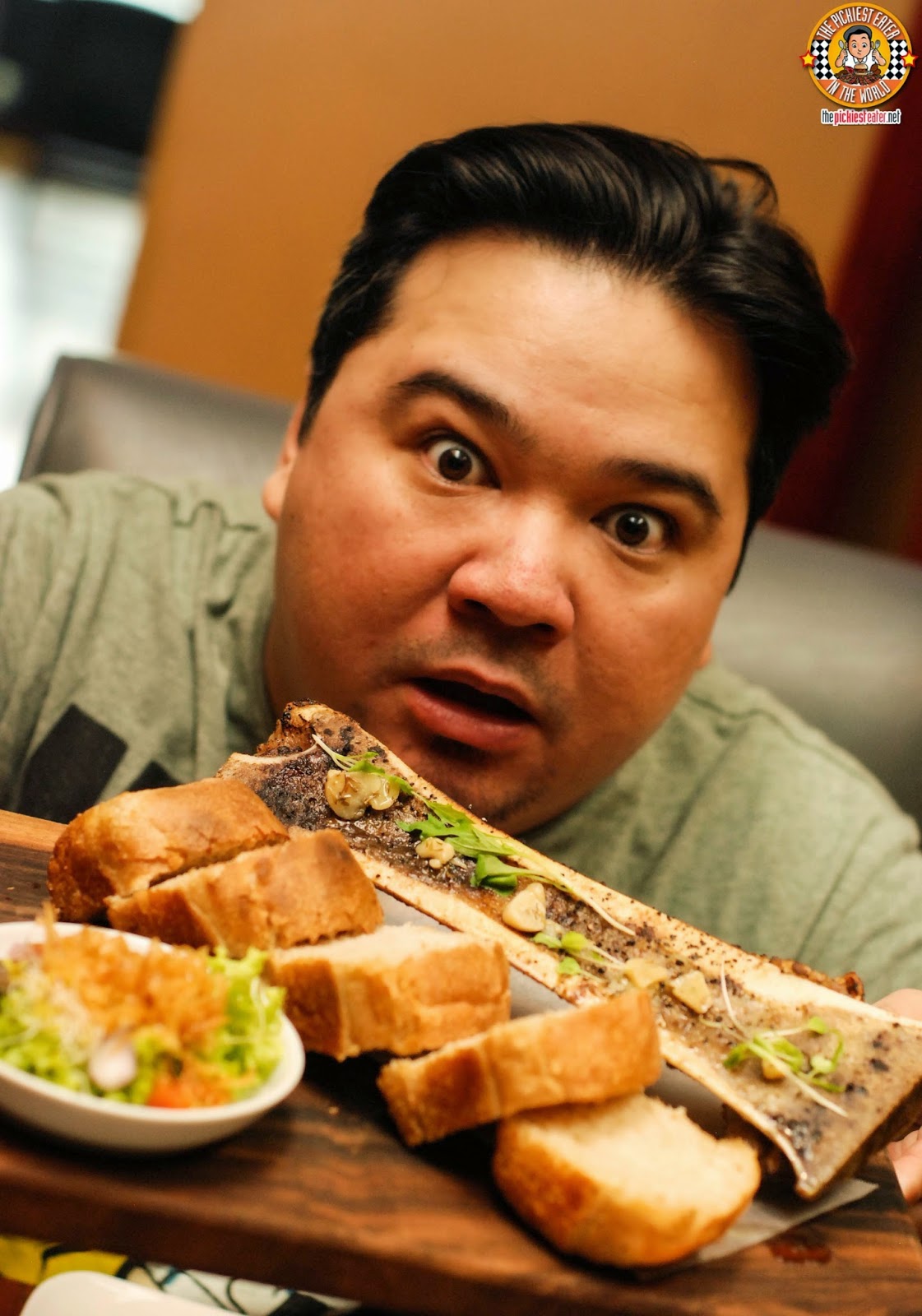 I've been back to Village Tavern quite a few times since that very first Epic Meal I enjoyed there when it first opened a couple of years ago. Since that first meal, Chef Josh Boutwood has continued to innovate his menu, consistently coming up with new dishes that  keeps his customers coming back for more.

Chef Josh's newest menu concepts were inspired by the Southwestern fare, and he managed to give it his trademark spin that makes Village Tavern's dishes so memorable! 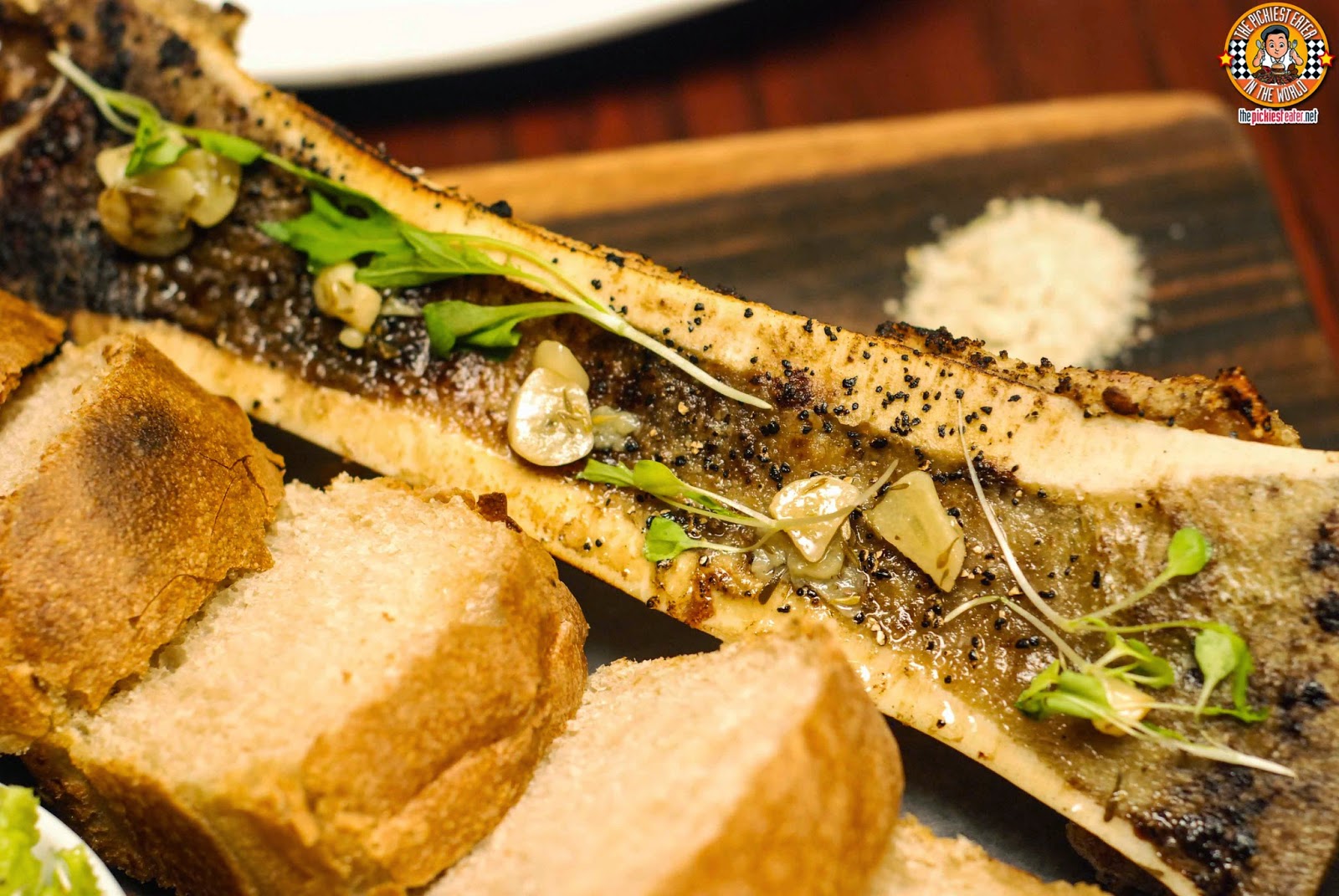 Before we went on our journey of Southwestern cuisine, I first sampled an appetizer at Village Tavern that I had long wanted to try since the moment I saw it in the menu - the Roasted Bone Marrow (P350). The marrow is beautifully seasoned, and roasted to succulent perfection. Taking a scoop of marrow and spreading it over the slice of sourdough bread, reveals an almost-buttery like consistency, with a pinch of sea salt helping accentuate the natural flavor.

Although I am fully aware how decadent the marrow is, I really couldn't help but decimate the bone until it sparkled.

Out of the nine new Tex Mex dishes, we managed to try six of them! 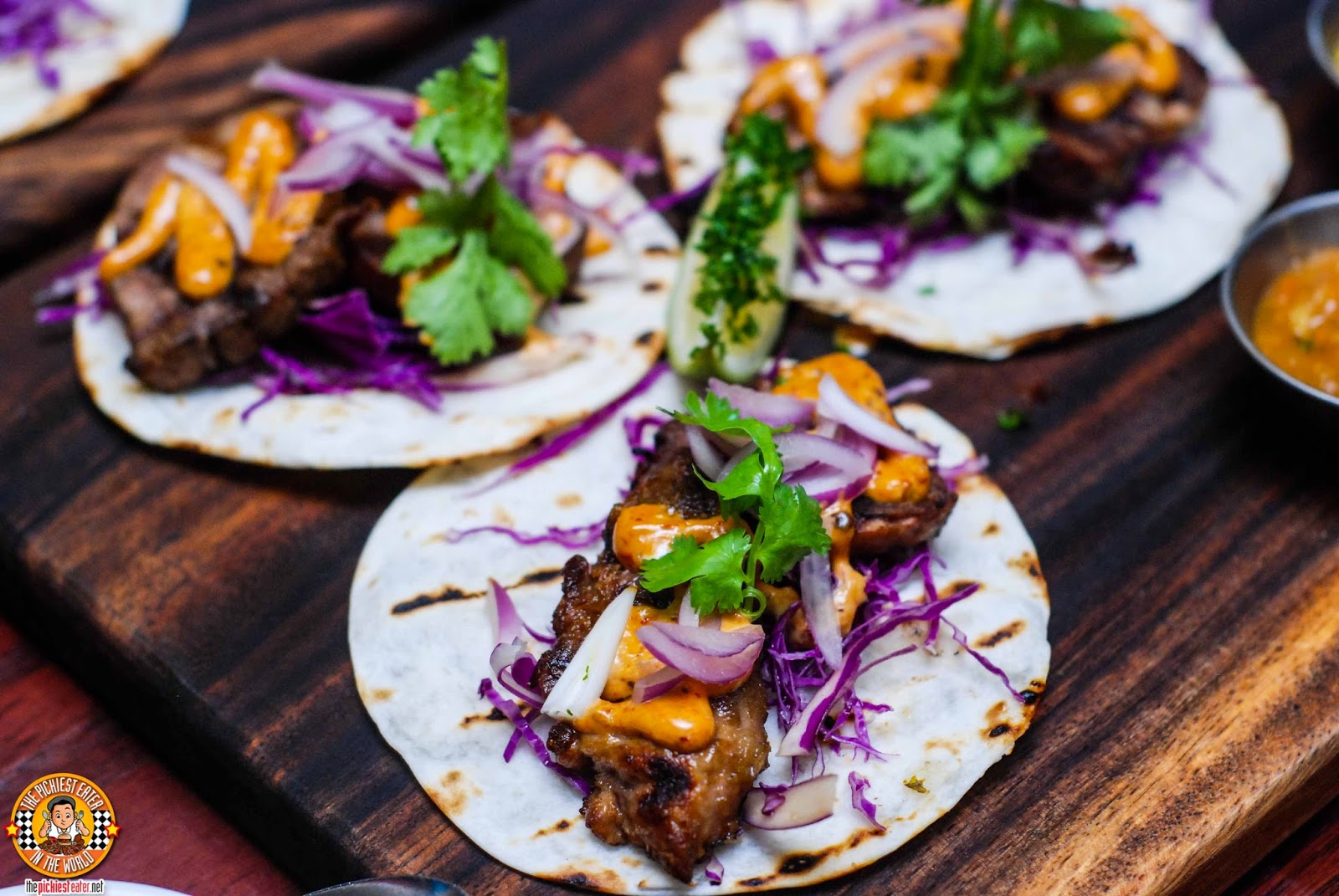 Our exploration of Village Tavern's foray into Tex-Mex Cuisine, was the Ox Tongue Tacos (P350). I am not particularly fond of  Ox tongue because well.. It is the tongue of an ox. Being a picky eater, I would rather eat the Ox meat than the tongue, but I must admit this, was rather tasty. The amazingly tender Ox tongue is braised in South Western spices, laid out on a grilled tortilla, then topped with a lightly spicy Chipotle Pepper Sauce. 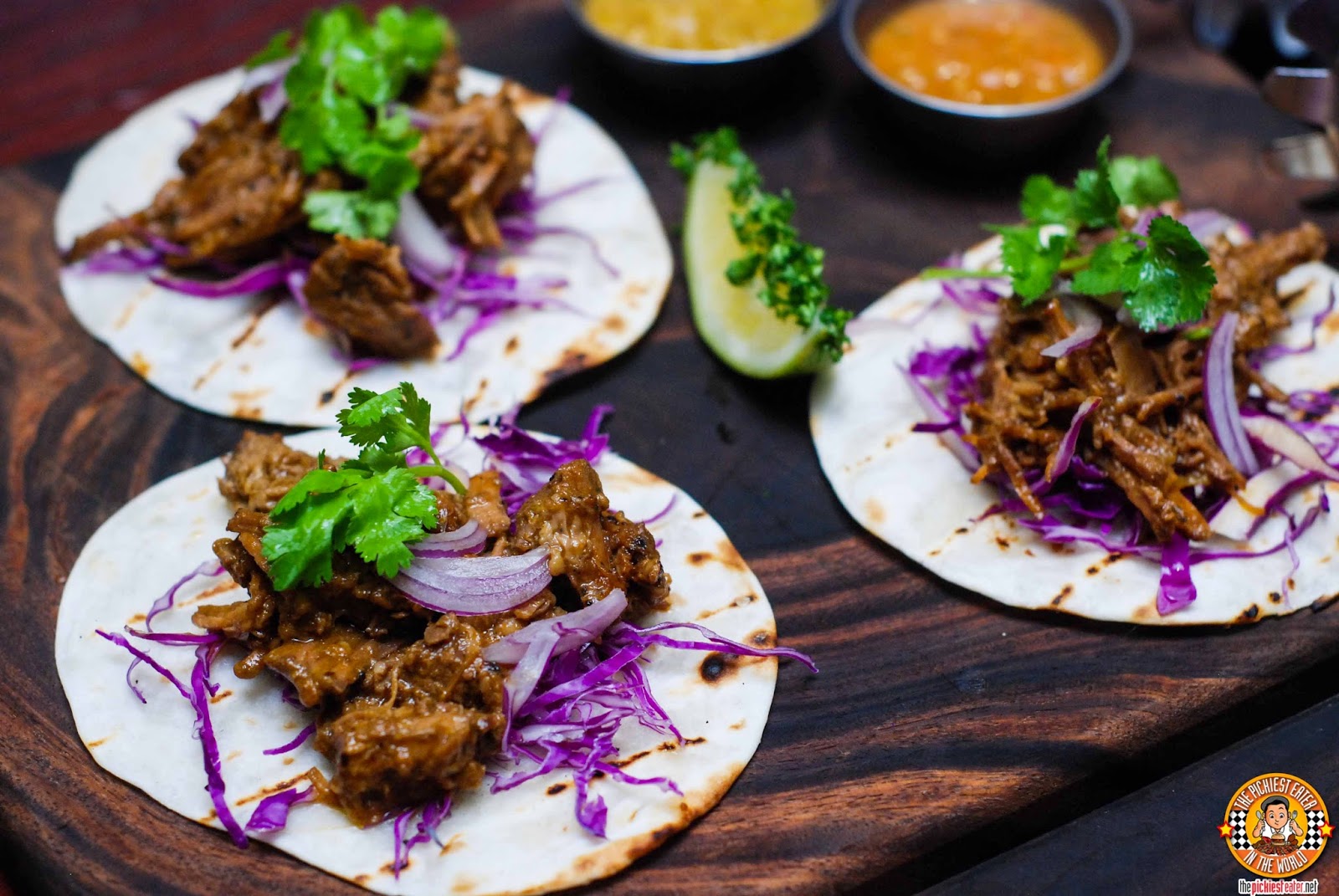 The Brisket Tacos (P350) was more up my alley. Wonderfully slow cooked brisket of beef, shredded and mixed with a medley of Cumin, coriander and Chipotle, then served in a lovely grilled tortilla. 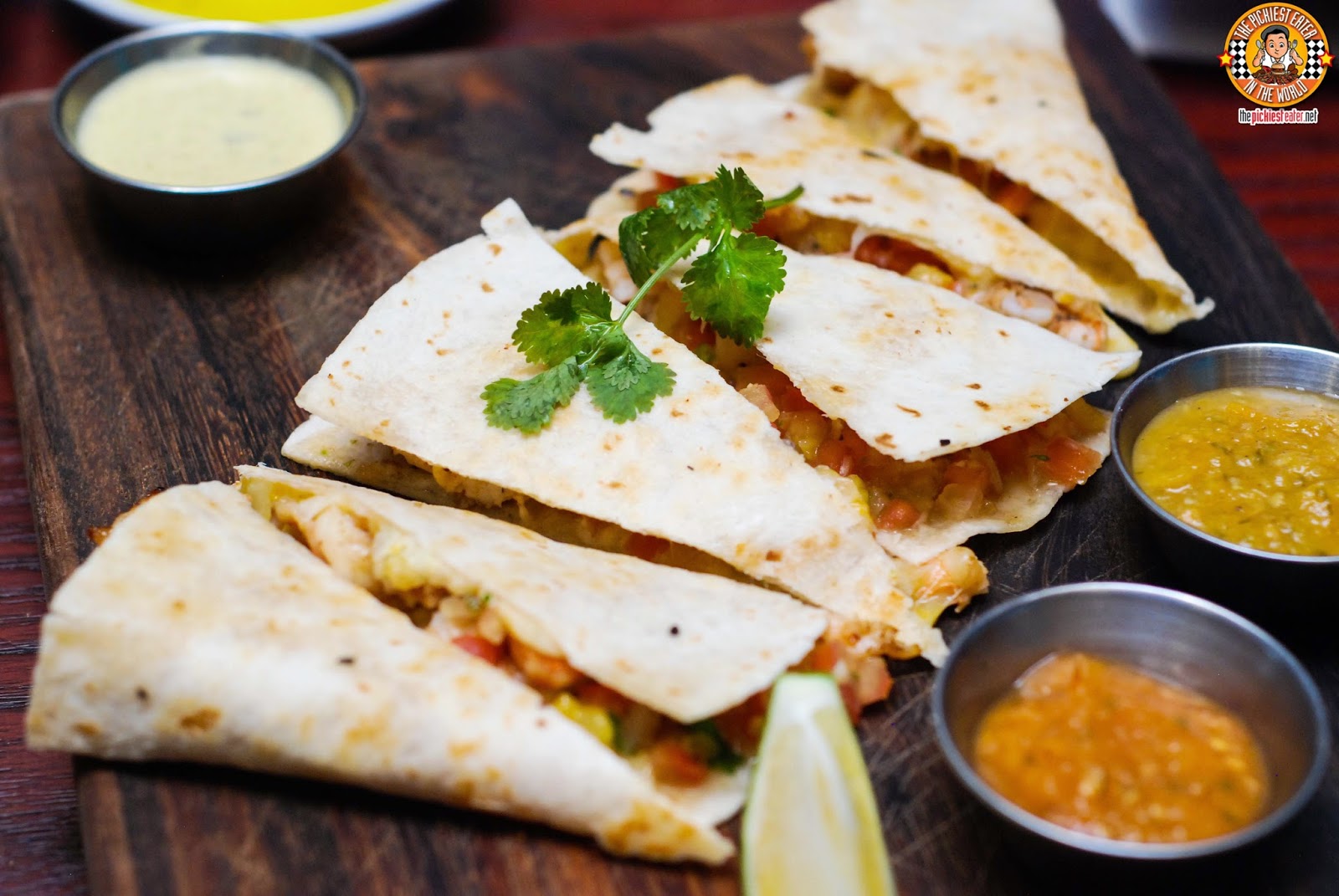 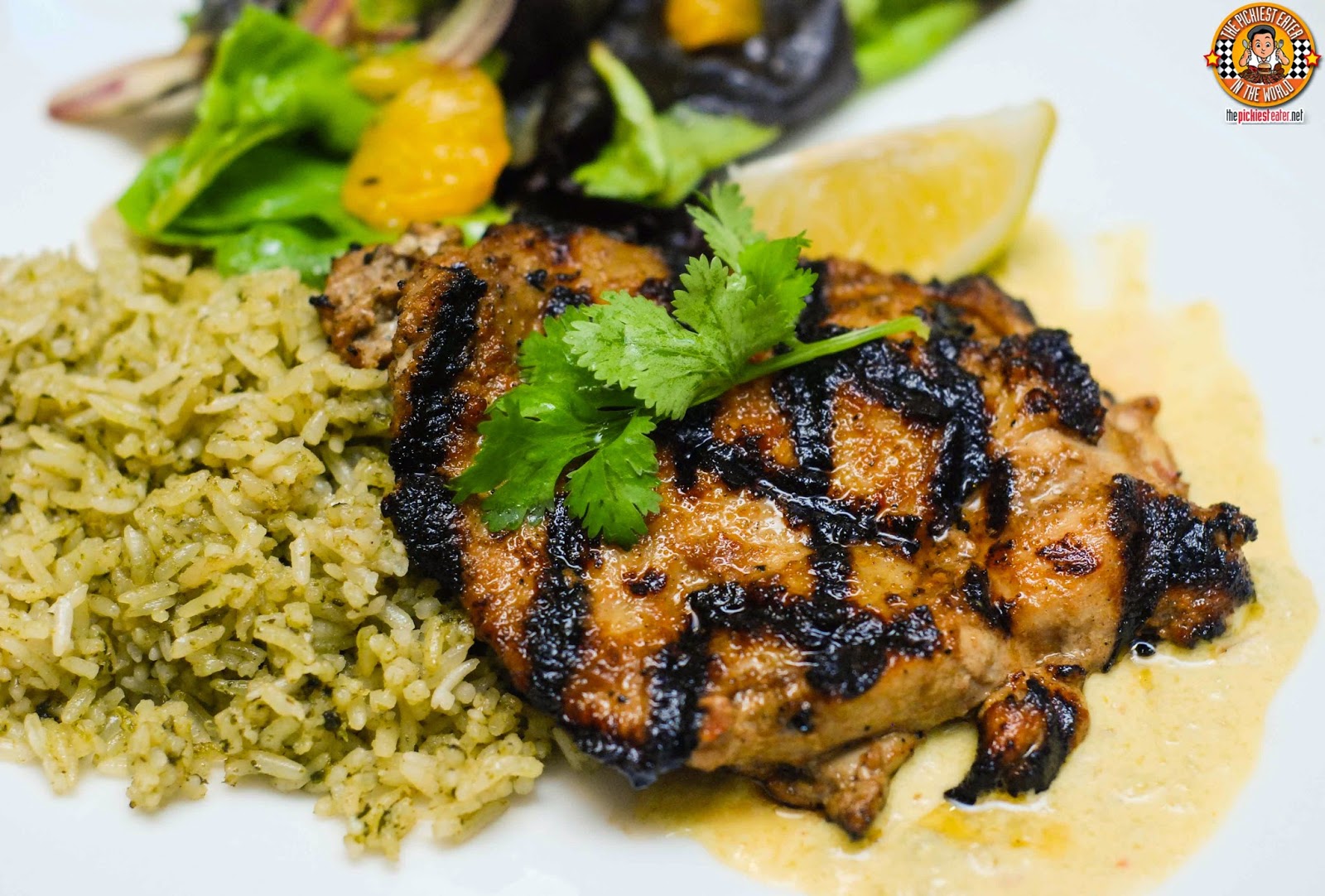 Our first entree was something on the lighter side - Chef Josh's take on the Mescal Smoked Chicken (P395). A juicy, Boneless Leg Quarter, Spiced with a Southwestern inspired rub, and Grilled to utter perfection, leaving deep char marks into the skin. The meal is served with Green Rice, and bed of Poblano Crema for a gentle touch of heat, and Village Tavern's House Salad. 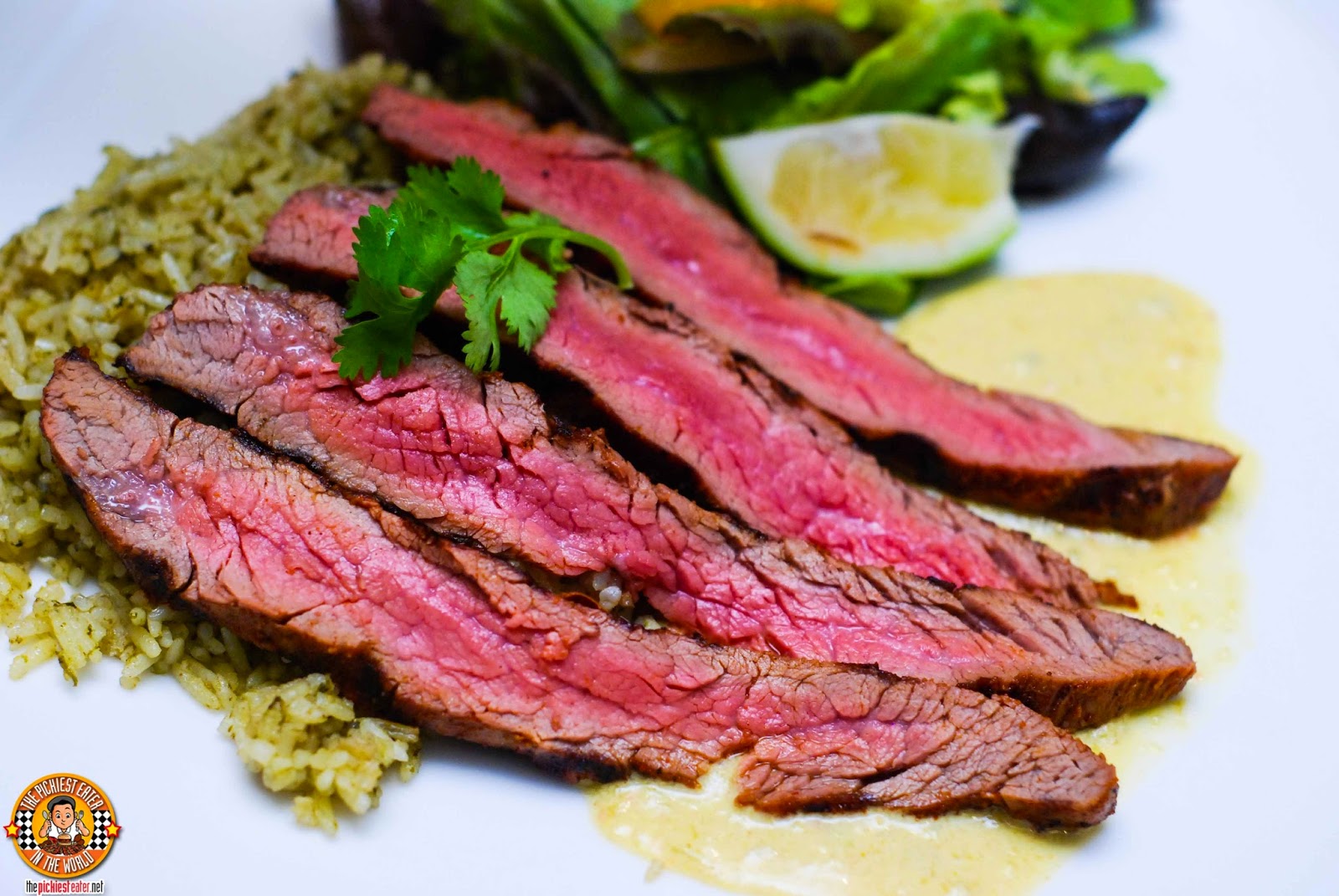 If you're looking for red meat, then the Spiced Rubbed US Prime Flank Steak (P550) is for you. Thin strips of Premium US Flank steak, grilled to a stunning medium. The meat was remarkably flavorful, and went perfectly with the Poblano Crema and green rice. 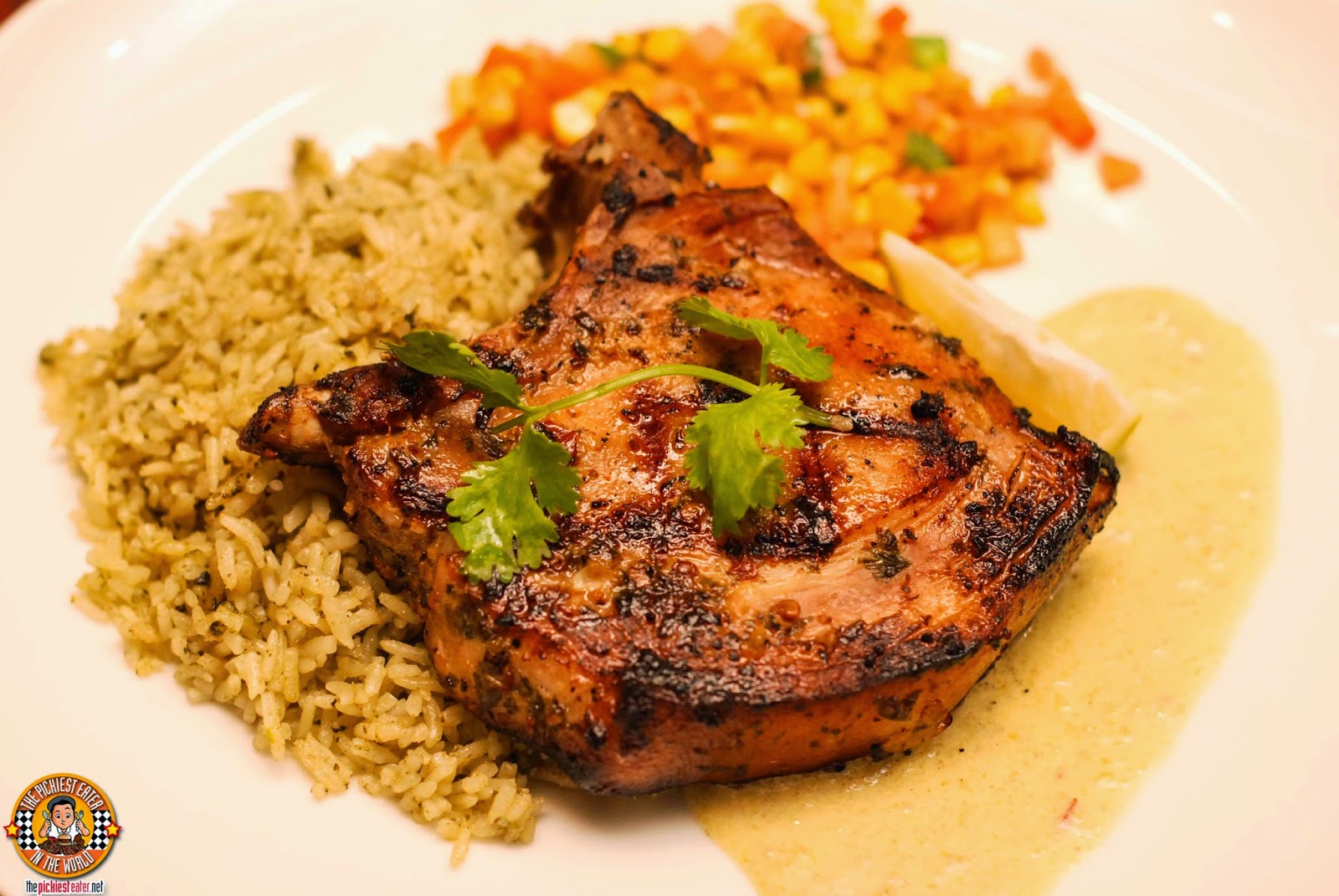 My favorite entree had to be the the Chipotle Pork Chop (P550).  The Pork Chop was bathed in its Southwestern marinade the "Sous Vide" way, before being masterfully grilled. Slicing through the chop revealed an immaculately moist, pork meat, with a gorgeous caramelized char along its edges. The Pork Chop is also served with Green rice and Poblano Crema. 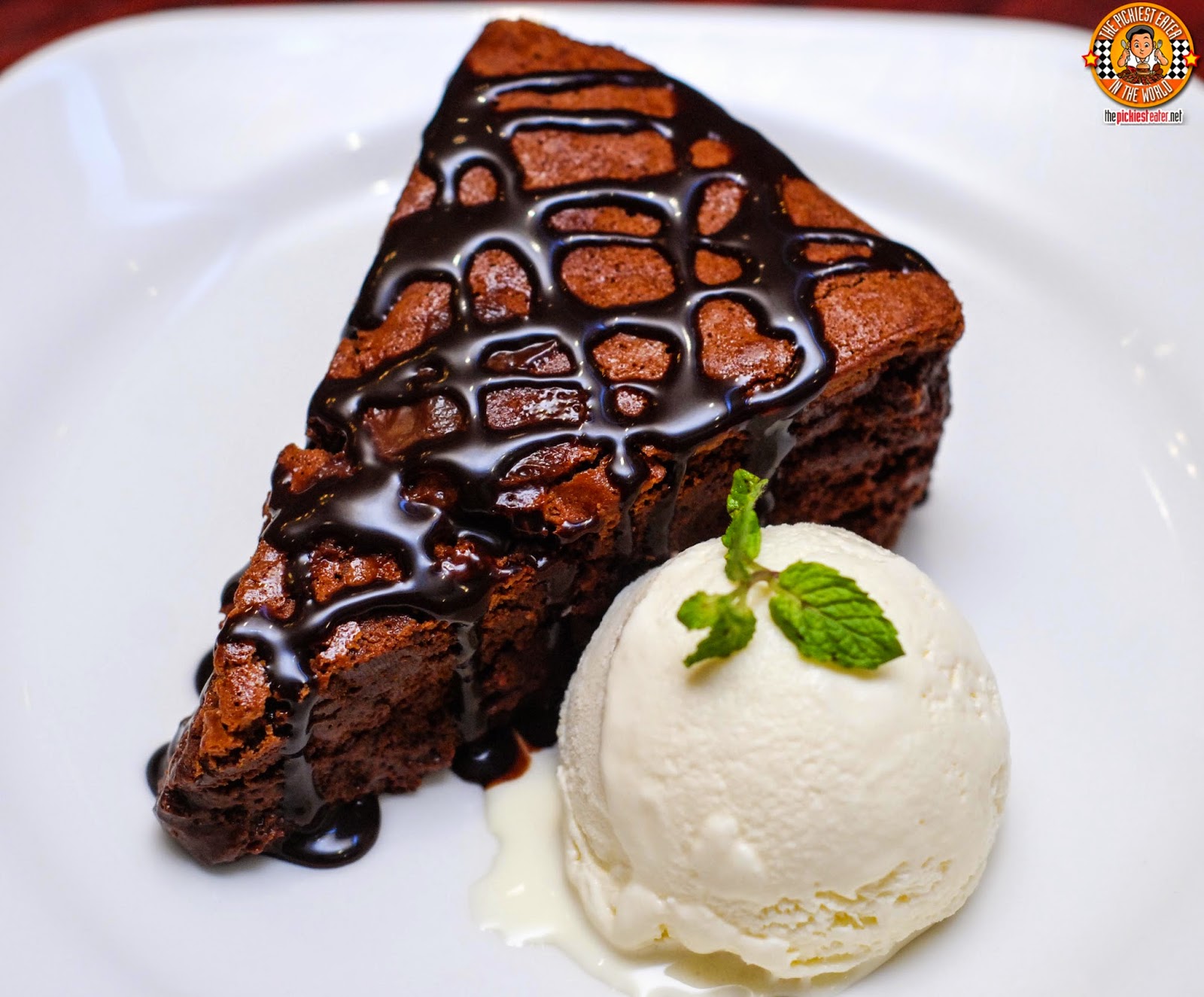 Our host felt we couldn't leave without trying the St. Barths Chocolate Torte (P395), which was met with absolutely no resistance by Rina. The French chocolate cake was wonderfully moist, and Chocolate lovers will appreciate the fact that it was also drizzled in dark chocolate syrup.

The scoop of Vanilla Ice Cream helps the bitterness of the chocolate from becoming a bit too much for me. 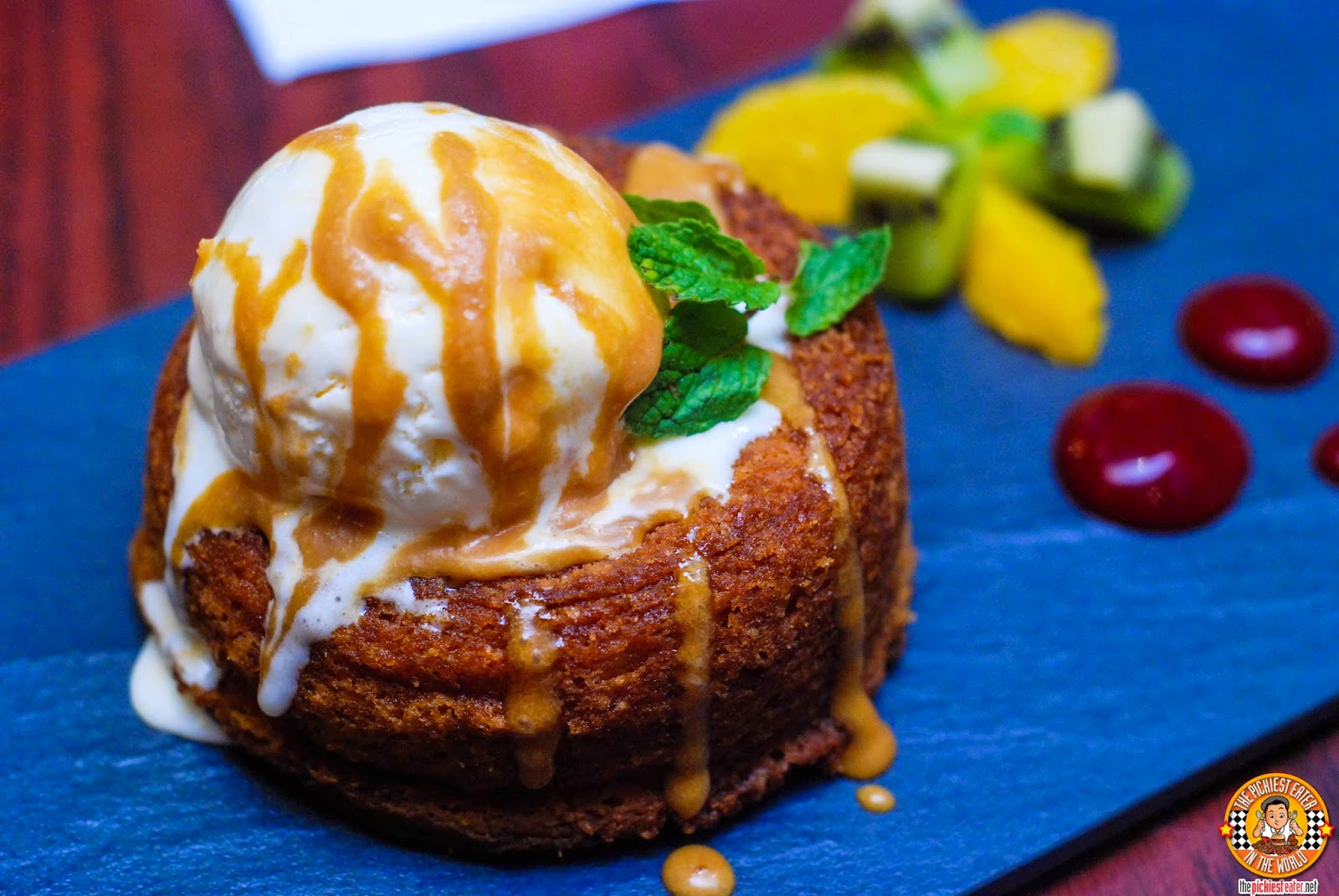 This instantly became one of my all time favorite desserts. EVER.

That warm butter cake has a moist inside, which is accentuated by the edges that have a light crispiness, then topped with a scoop of Vanilla ice cream and a drizzling of sweet caramel sauce.

Definitely worth going back for! 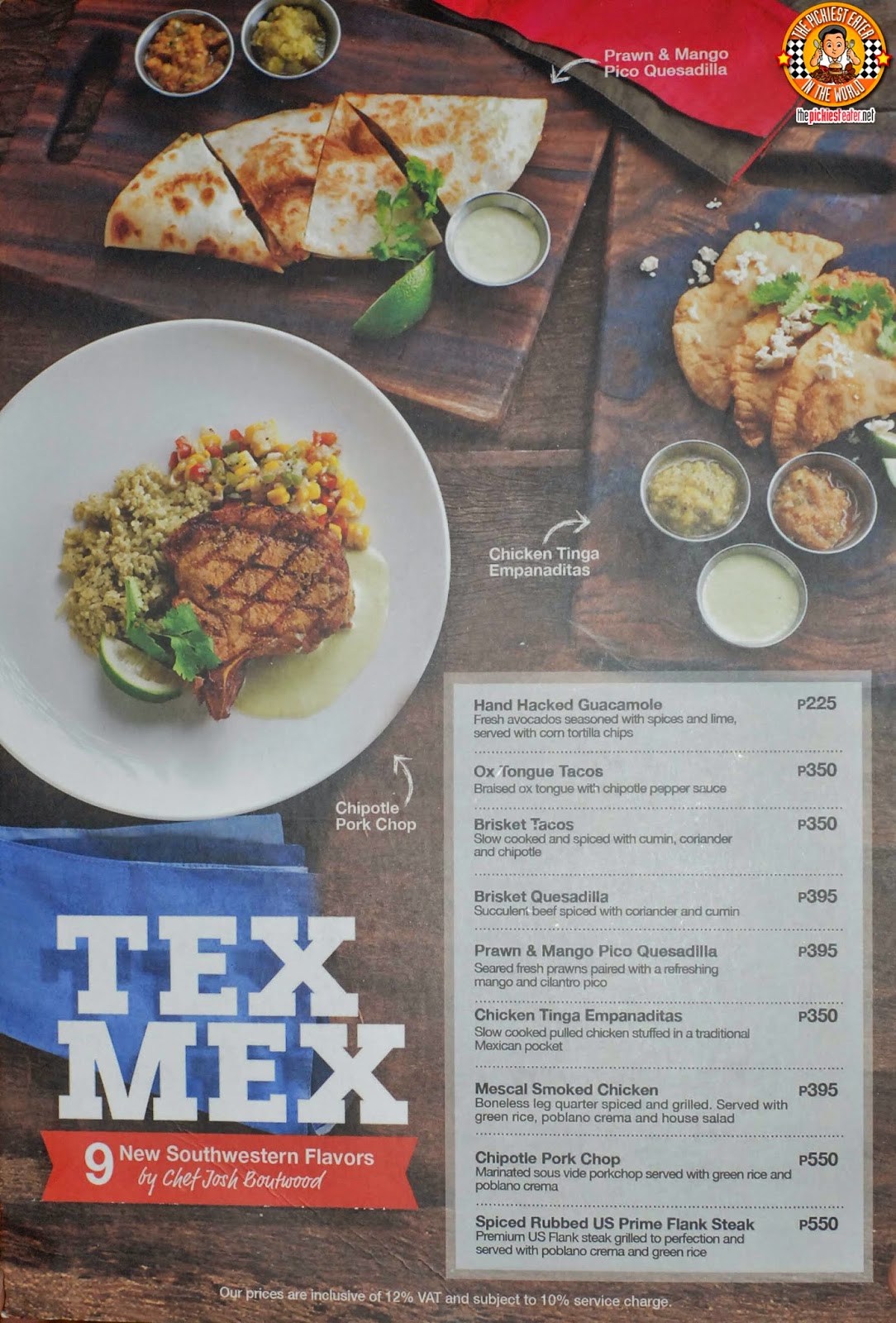