GIVE ME LIBERTY: LIBERTY ASIAN REFUGE AND BAR 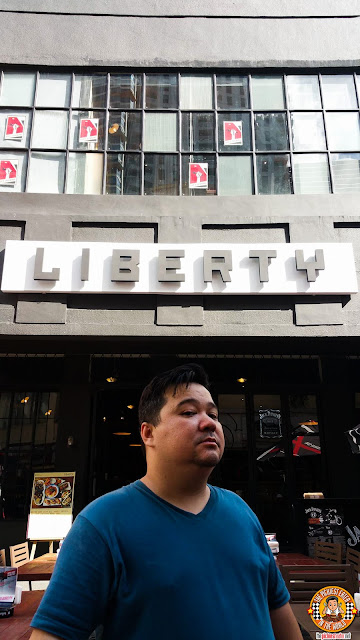 I still remember the first time I met Chef Jonvic Mangibin. It was for a dinner at the old Olive Kitchen and Kitchen Bar a couple of years ago, where he was the Sous Chef of Chef Rob Pengson. Being the second in command of a celebrity Chef would seem like a daunting task, but I was impressed with how Chef Jonvic seemed to have the full trust of his boss.

We were happy to meet Chef Rob, however we weren't expecting him  to stay long because of his busy schedule. Lo and behold, Chef Rob just made sure his guests were settled in and comfortable, but by the third course, he bade us all adieu, and left for his next schedule, leaving Chef Jonvic with the reins of his kitchen without a second thought. Mangibin did not disappoint, as he masterfully churned out one dish after another, each dish better than the next.

Chef Jonvic and I crossed paths once again late last year when I visited Lola Cafe, where he had added his own twist to its classic Filipino menu.

During my visit, Chef Jonvic kept gushing at his newest baby, which he called, "Liberty". As much as he enjoyed his work at Lola, he was incredibly excited to unveil to his new restaurant, where no pun intended, he had the "liberty" to infuse his own, original ideas.

Months later, I got the invite that I've been waiting for. Liberty Asian Refuge and Bar has opened in Eastwood! 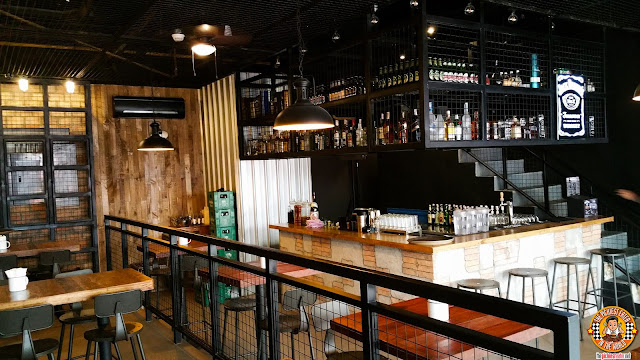 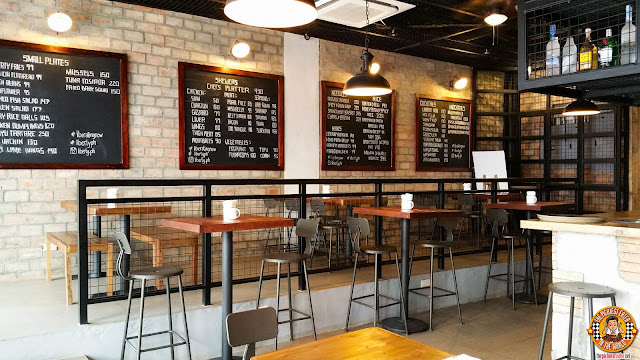 Though it does have a bar feel to it, I can assure you that any establishment with Chef Jonvic at the helm, the food will definitely be the star of the show.

But don't get me wrong, Liberty has the "Bar" part of its name down pat, with an array of cocktails and craft beers. Including a Butterscotch flavored Beer that I thoroughly enjoyed.. and this is coming from a non-beer drinker! 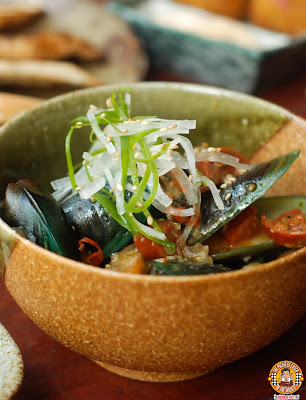 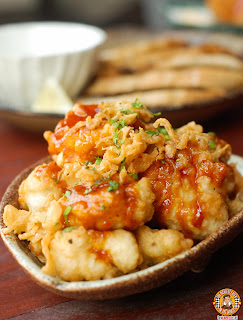 Let me begin by telling you about some of the dishes that was out of my element, but my friends raved about, beginning with the Mussels (P190), which is mixed with Chorizo Hash and bathed in a delectable Curry Sauce. The Cauliflower (P95) will remind you of BonChon Style Chicken, where it's deep fried and glazed, but this time in a Red Bean Sauce, and a touch of lime for added zest. 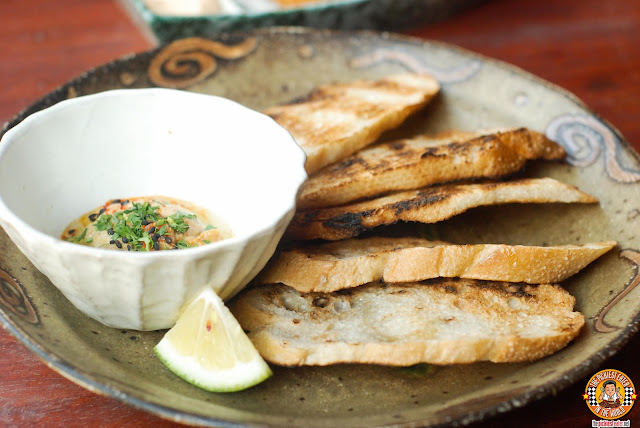 If you're into Uni, then you'll definitely enjoy the Sea Urchin (P130) "Dip". The Urchin is mashed together with Burnt Eggplant, and an infusion of Yuzu oil, for a touch of citric flavor. 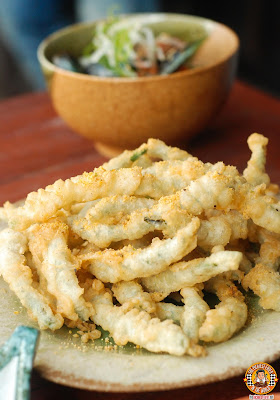 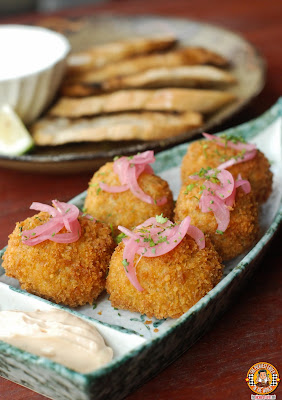 One dish that took me completely by surprise, was the French Beans (P99). French Beans are coated in a delightfully seasoned batter, and deep fried to a golden hue. However, the incredible thing about this, is that the staff concocts dehydrated bacon, and turns it into powder, which is sprinkled over the beans for an added savoriness that goes perfectly with the Salted Egg Mayo dip, and a hint of Lime.

Another must try is the  Curry Rice Balls (P105), which is made with a melted cheese and curry rice mixture, and topped with Pickle Remoulade for a nice acid counter. 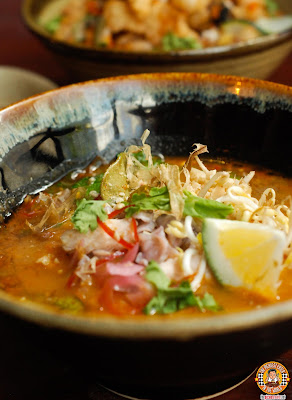 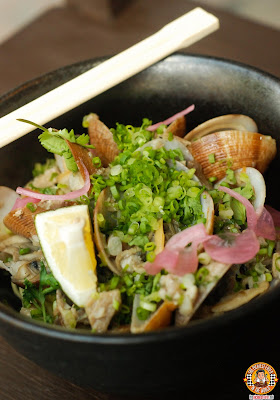 Liberty wouldn't be much of an "Asian Refuge" without noodle dishes, and Chef Jonvic really used his culinary creativity to its fullest when he conceptualized these dishes. First were the two dishes that I didn't eat, but my friends enjoyed immensely - starting with the Spicy and Sour Soup (P233), which is made with Salmon Belly, Baby Squid, Miso Kaffir and Glass Noodles. The other dish I skipped was the Clams and Bacon (P209). Made with a Shell-fish Sake Broth, Miso Butter, Egg Noodles, and Chili Oil, this was a winner with the other bloggers. 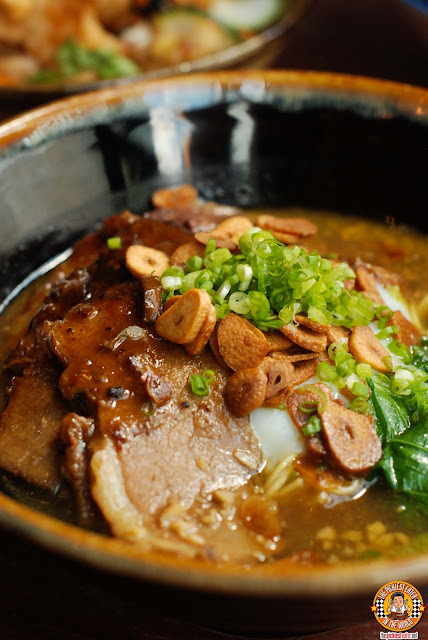 I'm pretty sure it surprises no one to find know that I stuck with the Smoked Beef Brisket Noodle Soup (P245). Made with Mustard Greens, 630 Egg, Meat Jus, on a bed of Egg Noodles, the meatiness of the brisket was very prominent in the savory flavor of its soup. I'm was half considering asking for a cup of rice so I could pour the soup over it and feast on that. AMAZING.

Chef Jonvic also composed a line up of Baos for us to feast on... and they're nothing short of remarkable. 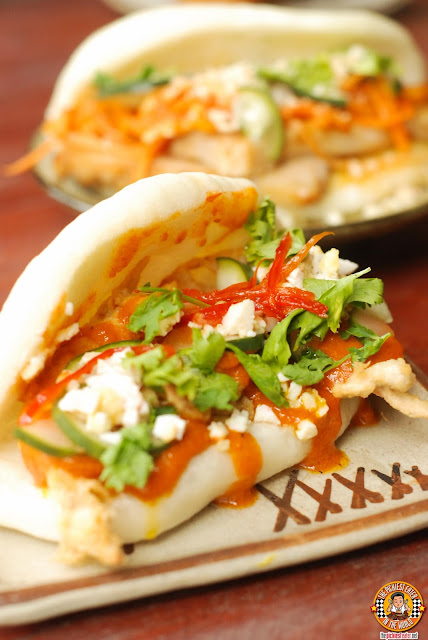 The Crispy Crablets (P99) would make any Crab love drool all over their plate! The Crablets are drizzled in a Chili-Aligue Sauce, and topped with Cucumber Pickles and sprinkled with Salted Egg Crumbs. 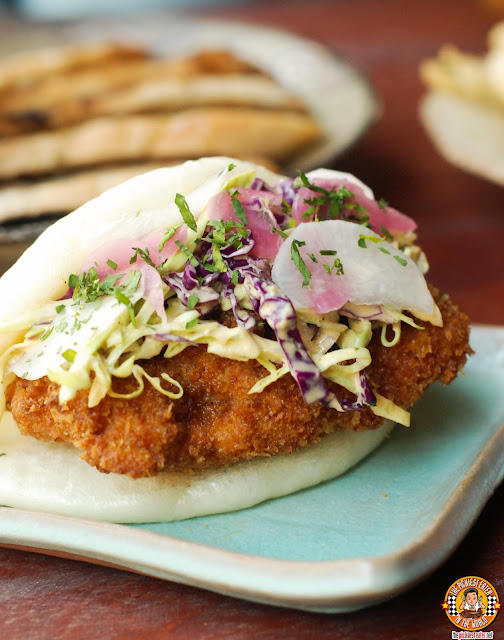 The Fried Chicken Bao (P99) was more to the liking of my palate. Juicy, marinated Chicken Thigh Meat is breaded and deep fried to delicious awesomeness, and slathered in Sriracha Mayo, and topped with a tasty Cabbage Slaw, all tucked in between a steamed bao.  Oh hell yeah. 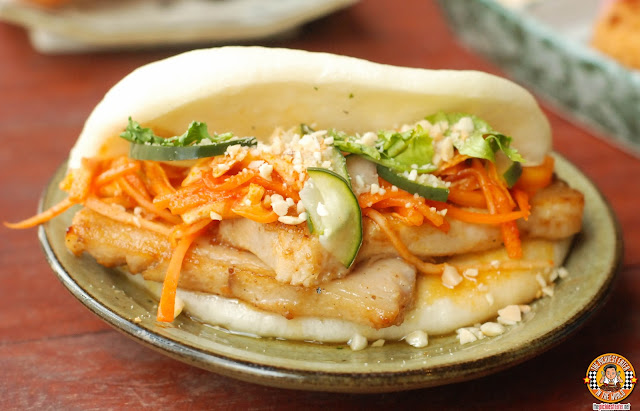 Yet another must try,is the Miso Pork Belly Bao (P99). An incredibly tender slices of Pork Belly bathed in Miso, is laid on a steamed bao and topped with Apple and Pear Kimchi for an added freshness, then doused with Chef Jonvic's special Honey-Miso, and sprinkled with Toasted Nuts.

The flavor profile of this is absolutely exquisite, giving you a play of different textures with every bite. The crunchiness of the Kimchi contrasts Tthe tenderness of the belly and the bao, as the flavors simply explode in your mouth. 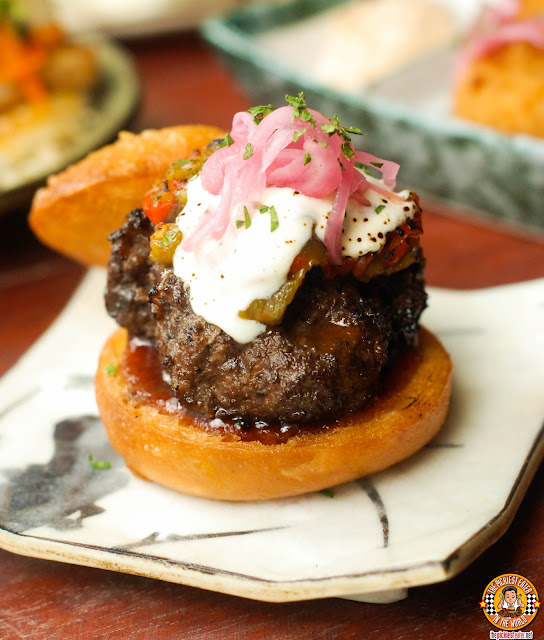 As much as I loved the Pork Belly, my favorite among the Baos was the Liberty Burger Bao (P110). This was pure genius. A chunky Angus Beef Patty is slathered in Liberty's BBQ Sauce, and topped with Kesong Puti, nestled between a DEEP FRIED BAO.

This is my favorite bao EVER, and that's saying a lot because I've been to Baohaus in New York! 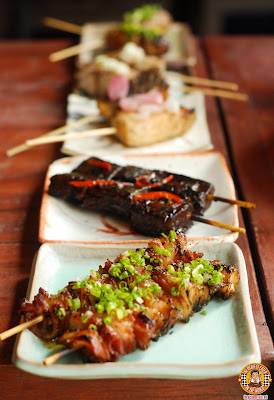 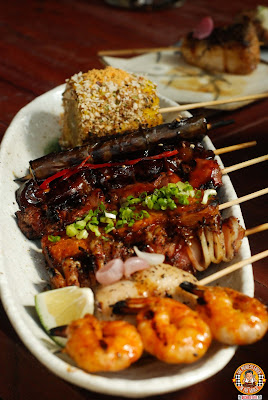 Also available on the menu is an extensive line up of Skewers for you to choose from. The Line up ranges from the basics, such as Chicken Wings, Pork Belly, and Shrimp, to a little bit more adventurous fare, such as Corazon (Chicken Heart), Ox Tongue, and the fatty Pork Face.

If you're too tired to think of what you want, then you can order the Chef's Platter (P430), where the kitchen selects a selection of skewers for you, giving you an assortment of two sticks of Meat, Chicken, Seafood and Vegetable.

If you're a Vegan (Why are you on my blog?), fret not, Liberty has got you covered with Eggplant, Tofu, Corn and Mushroom offerings. 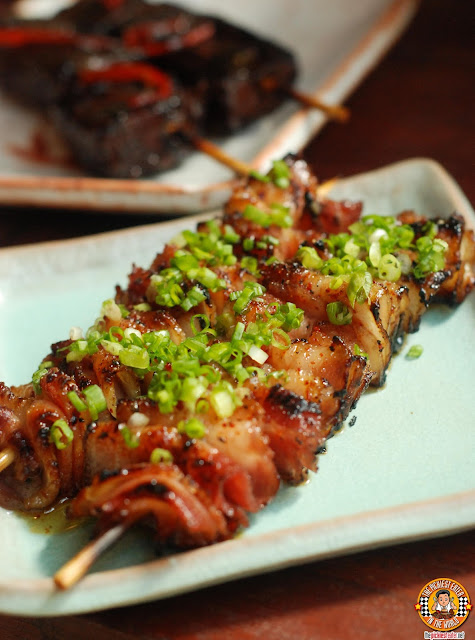 My favorite Skewers of the day were undoubtedly the BACON (Of course), Chicken Skin, Pork Face (It's like a small cube of pure fat! And yes, I'm saying it like it's a good thing!), and the Black Cod.

A friend of mine that has tried the famous Black Cod dish of Nobu, as well as Liberty's version has said that, Nobu's version may be superior in terms of tenderness of the fish, however in terms of flavor, Liberty's

In case you were wondering, yes, Liberty also has Rice dishes.. And boy, what rice dishes they are :) 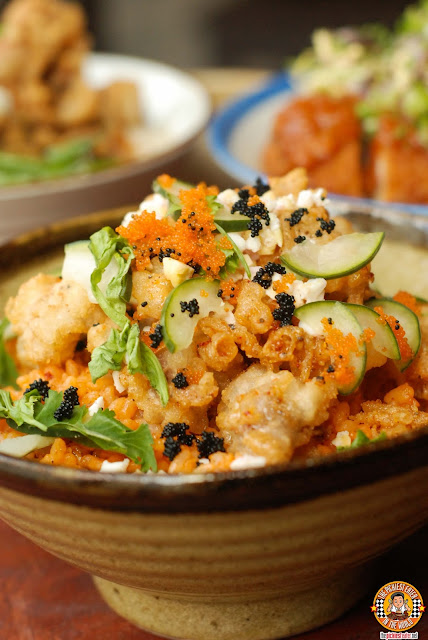 For those looking for Seafood, you will be more than satisfied with their Baby Squid and Crab Fat Rice (P190) dish. Made with Battered Squid, a bit of Salted Egg and Smoked Roe. 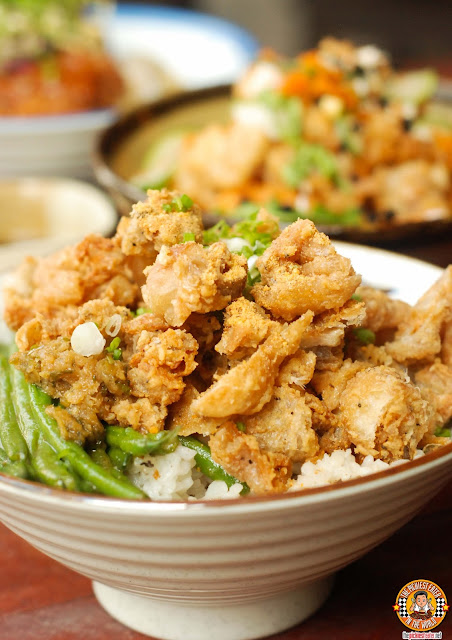 I absolutely loved the Chicken and Egg (P190) bowl. Made with Roasted Chicken Breast, then topped with deep fried Chicken Skin, and balanced with the creaminess of 630 Egg, and a touch of Tarragon Vinegar for a nice hint of acid. 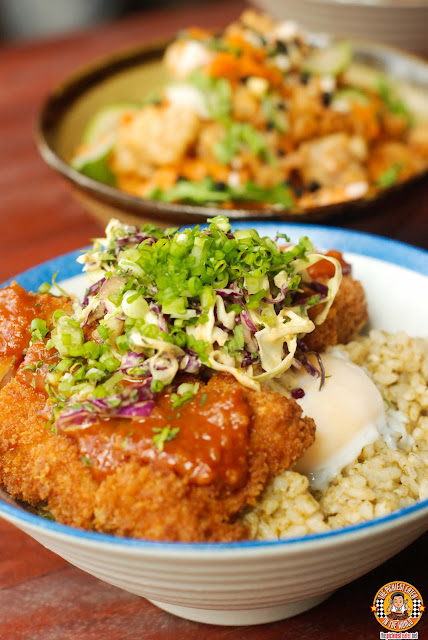 But there was one Rice Bowl to rule them all.. And that was the Deep Fried Thick Bacon (P190). A breaded slab of Thick Cut Bacon smoked in house, resting upon a bed of Curry Rice, and drizzled with a luscious Red Bean Sauce, and topped with a dollop of Coleslaw is enough to make your tummy do double back flips. 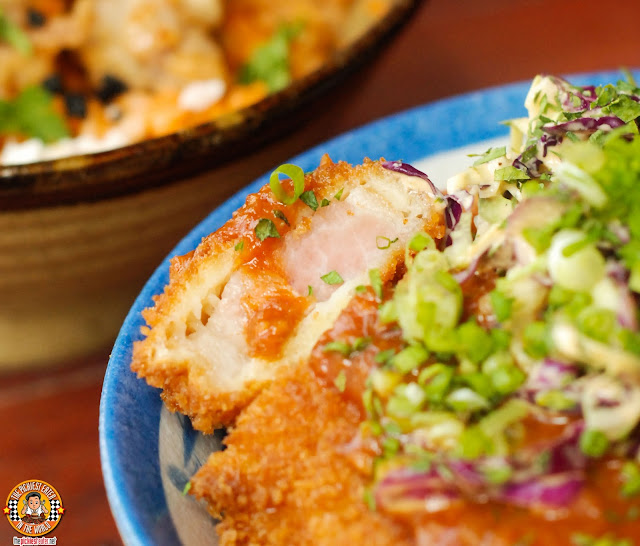 Just look how glorious that piece of bacon looks!! 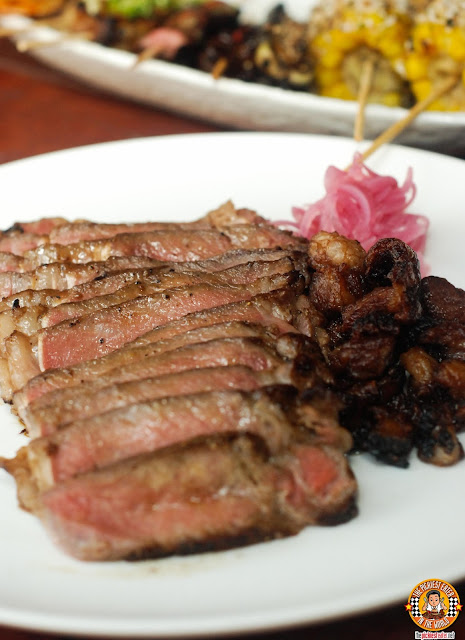 Chef Jonvic decided to let us try an off the menu item.. His Miso Butter Ribeye Steak. I can safely tell you that it was one of the best steak's I've had. The Miso Butter kisses the perfectly cooked meat, and which adds a new level of excellence to it. But Chef Jonvic didn't stop there. He trimmed a thin layer of fat from the side, and deep fried it until it turned into delectable toasted bits.

I'm not sure if it's available all the time, but it's worth a shot to ask :) 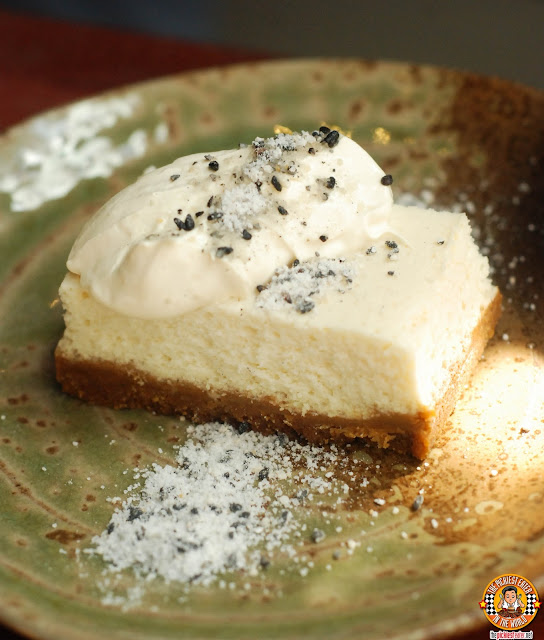 For dessert, Chef Jonvic Prepared two of his signature Dessert dishes, starting with the Cheesecake with Black Sesame Crumbs (P130). Light yet flavorful, this is a unique, yet satisfying way to end your meal. 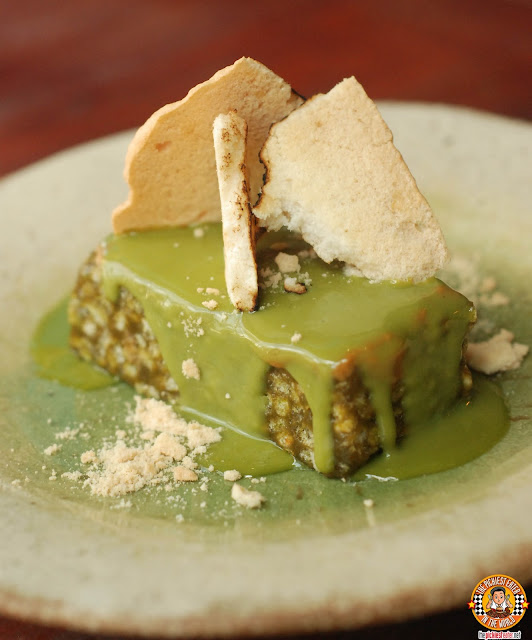 If you're like Rina, and enjoy all things Matcha, then you'll definitely enjoy Liberty's Matchamacallit (P120). A Matcha Chocolate bar is topped with Peanut Butter Crisps and Torched Meringue shards. 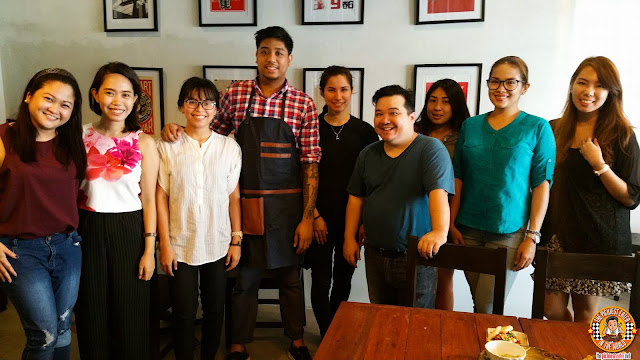 Thank you to Chef Jonvic, Rizza, and the entire crew behind Liberty Asian Refuge and Bar for the incredible meal. I was totally blown away with practically everything that came out of your kitchen, and with your remarkably reasonable prices, it's great to find another place to dine at in Eastwood!

Posted by The Pickiest Eater at 10:25 AM