I DID IT MAI WEI FANG I have professed my love for Chinese food on my blog time and time again, which is why I have so many Chinese restaurant entries. However, this was the very first time I would be visiting a Chinese bakery.. And I was incredibly excited!

I was ecstatic to find that the same care and precision used in meticulously creating Chinese savory dishes, is also used when baking the different types of breads.. Perhaps even more so with bread because being off by a few milligrams could lead to a baking disaster!

But Mai Wei Fang at Robinsons Place Ermita does a masterful job of bringing popular breads and other well loved snacks from China for us Filipinos to enjoy!

Truthfully, I can't think of who i would say is the competition of Mai Wei Fang here in the country, simply because I've never been to any place like it. Maybe there are some places in Binondo that I have yet to discover, but it seems to me that Mai Wei Fang is the first Chinese Bakery to hit the mainstream, not to mention make an impact as big as it has.. well to me at least! 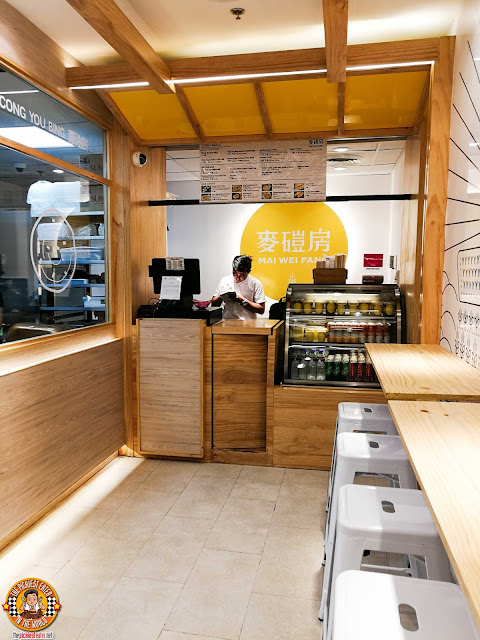 Occupying a cozy space at the Adriatico Wing at Robinsons Place Ermita, Mai Wei Fang's charming interiors melds the traditional Chinese feel into the modern age. The open kitchen gives you a glimpse of the action happening inside, and you see the dishes prepared with only the freshest of ingredients. 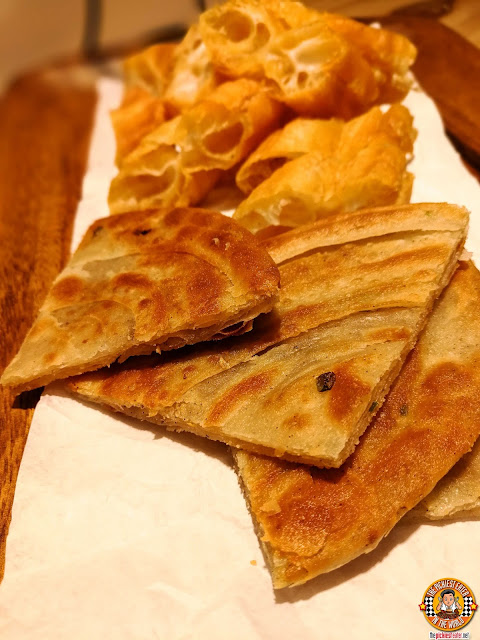 A great way to get your appetite going, is snacking on the Cong You Bing (P80, P35 add Fried Chicken). This light, Green Onion Pancake tantalizes your taste buds with its simple savory flavor, which is truthfully rather addicting. 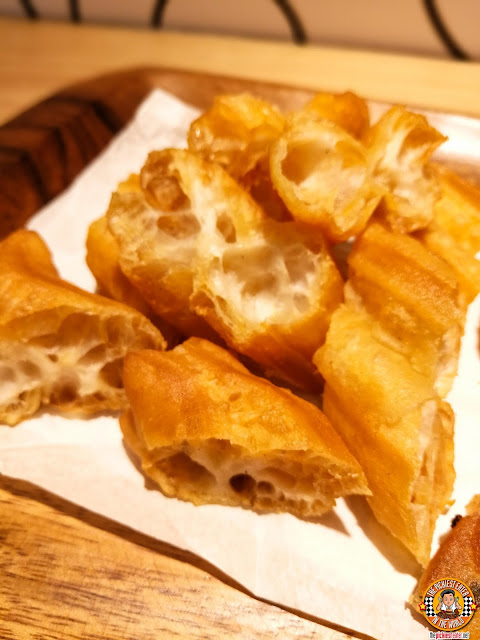 I've always been a big fan of You Tiao (P80), ordering it every chance that I get (Despite not knowing the actual name). Mai Wei Fang's version is the classic Fried Doughnut Breadsticks, sans sugar, but still rather tasty, without being overly oily.

The star of Mai Wei Fang Show has got to be their Shen Jian Bao (P165). This rather unique dimsum is a cross between your traditional pan fried dumplings and the popular soup filled Xiao Long Bao. 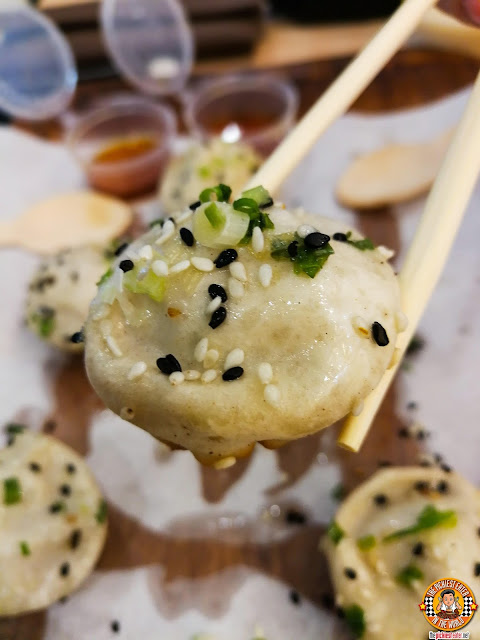 The meaty pan fried dumpling is held together by the wanton wrapper that has a bit of crispiness to its exterior, and gives a burst of flavor when your take a bite. Some enjoy it more with Black Vinegar, but in my opinion it's flavorful enough on its own. 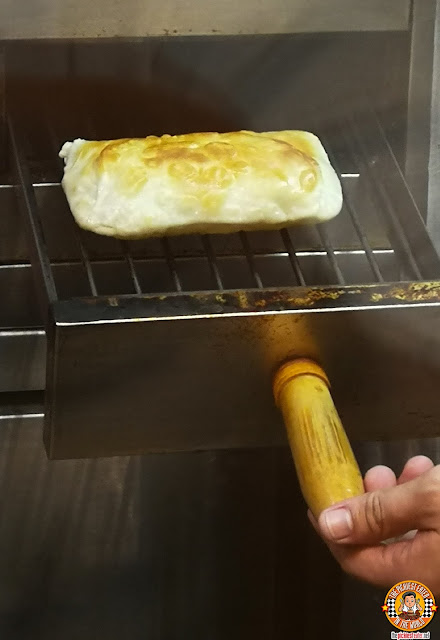 Our host, David, called us to check out the view into his open kitchen, so we could see a piece of Shao Bing being toasted. 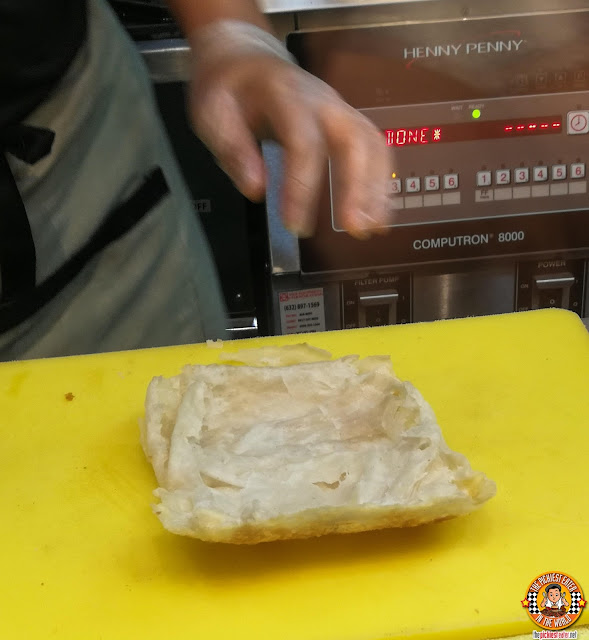 Once it was good and hot, they split the flakey bread open. 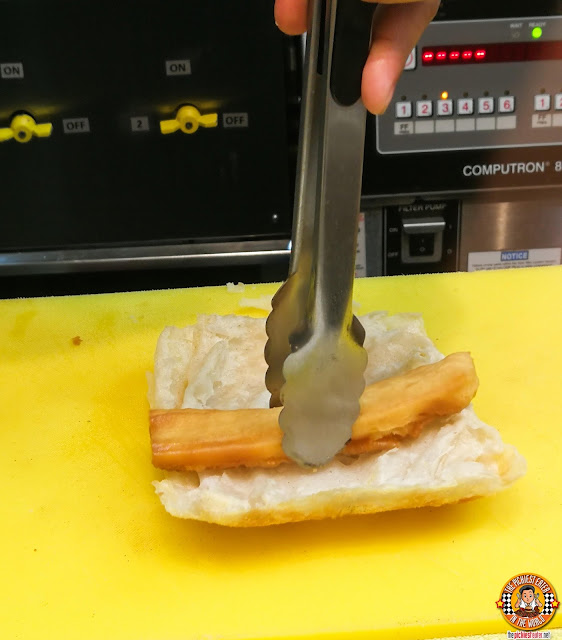 I found it a little odd that they placed a You Tiao on it, but then again, I love those delicious fried crullers so I didn't mind the bread on bread theme. 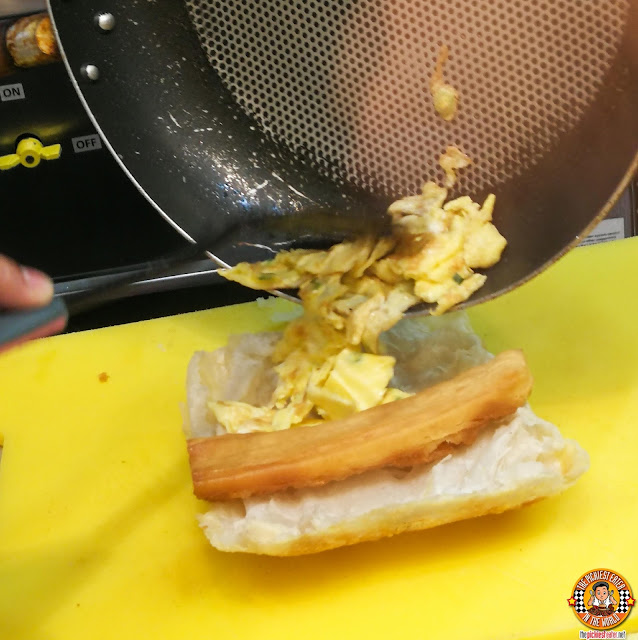 *Bleep* got real when they added some scrambled egg into the Shao Bing.. 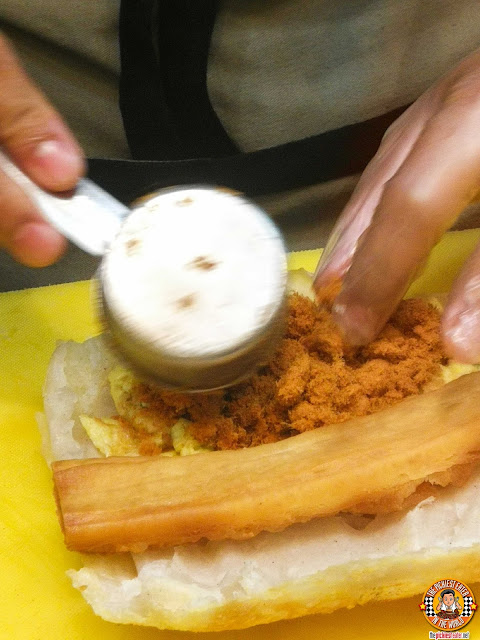 Then piled on some tasty Pork Floss... 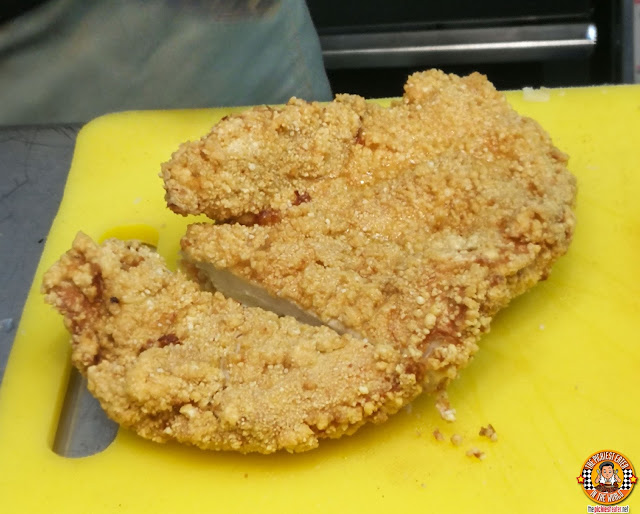 Then suddenly, they brought out a glorious looking Chicken Chop!!! 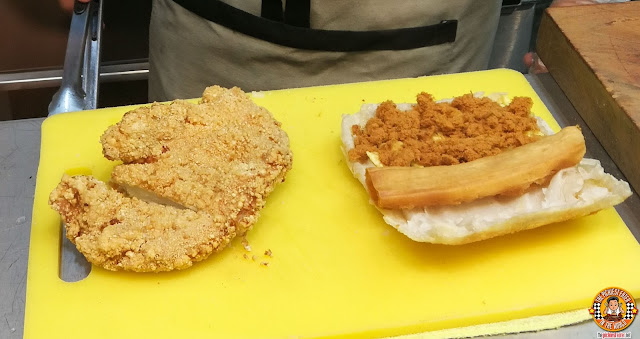 Once the juicy Chicken Chop was sliced, the pieces of the chicken fillet were piled on to the Shao Bing.. 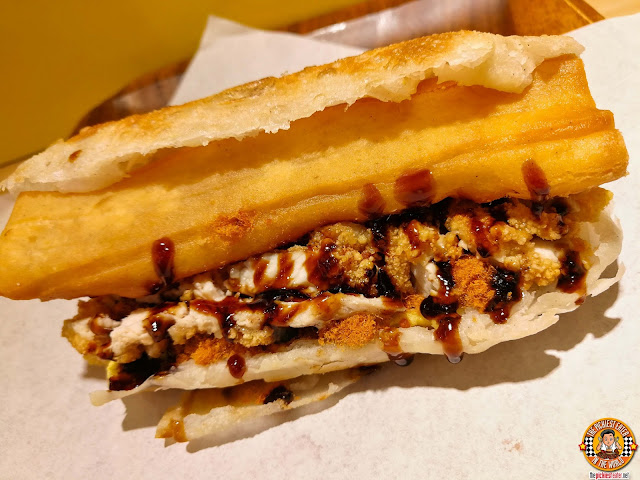 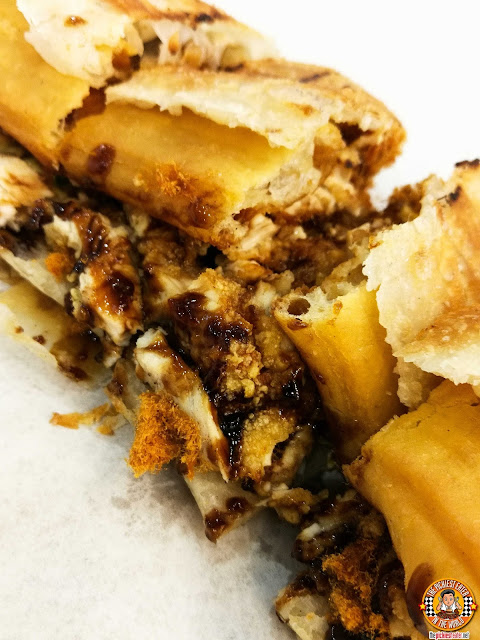 That deliciously Flaky Layered Flat Bread proved to be the perfect housing for the delectable Scrambled Eggs with minced Green Onions. The juicy Chicken Chop the flavorful Pork Floss, just worked perfectly, with the You Tiao making it even more filling. 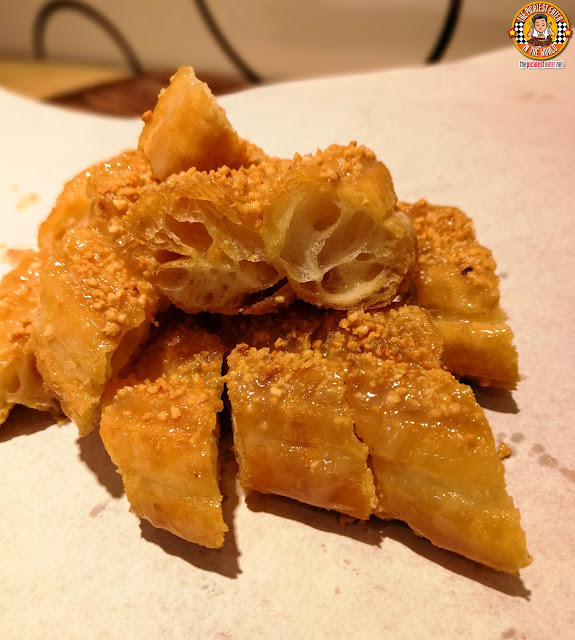 The You Tiao made another appearance for dessert, this time with a drizzling of sweet milk and a sprinkling of crushed peanuts. The You Tiao Dessert (P100) was an almost poetic way of ending your meal at Mai Wei Fang. 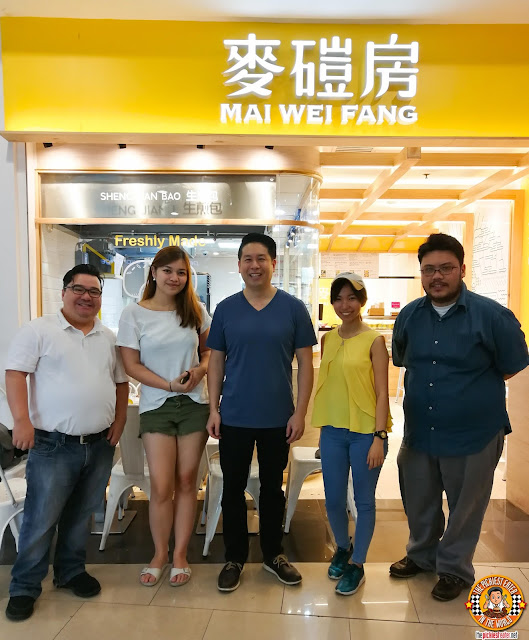 Thank you to our host, David, for helping us discover there's so much more to Chinese Cuisine than Sweet and Sour Pork and Pancit. The breads that come out of Mai Wei Fang's ovens were excellent, and something that you must try for yourself!

With it's delicious food at ridiculously affordable prices, I can't wait for more branches of Mai Wei Fang to spread all over the metro! 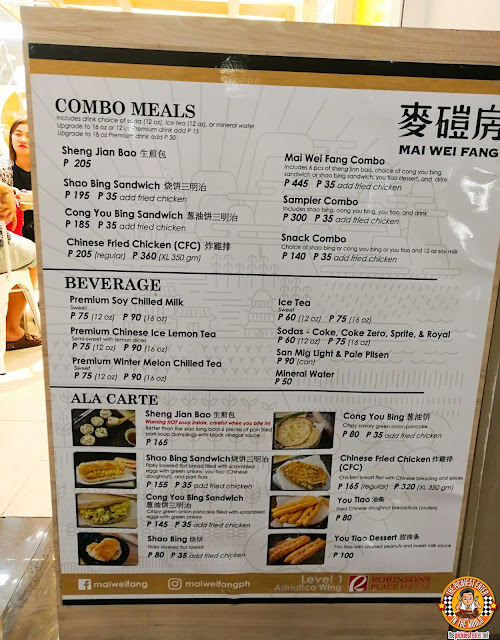