What's the best pasalubong you've ever gotten? Most people get shoes, shirts, or caps. People look forward to getting balikbayan boxes filled with goodies, like perfumes and chocolates, all from a loved one thousands of miles away.

. But not me. Such trivial trinkets don't really do it for me. I'm thankful I have a Godmother in the States who knows me so well, and is well aware that as grateful as I would be for anything she'd give me, I wouldn't be going bonkers over a hat.

Don't get me wrong.. I love getting shirts, shoes and caps as much as the next guy, but my Godmother sent me a package together with my cousin that completely blew my mind away. It became the Barometer that all future Pasalubongs would be measured by. And I don't think anything in this world could come close to it. In fact, tears are welling up in my eyes as I am typing this, just at the memory of what a wonderful gift it was..

Especially when it's so good, it's in the "Best Thing Ever" Hall Of Fame. 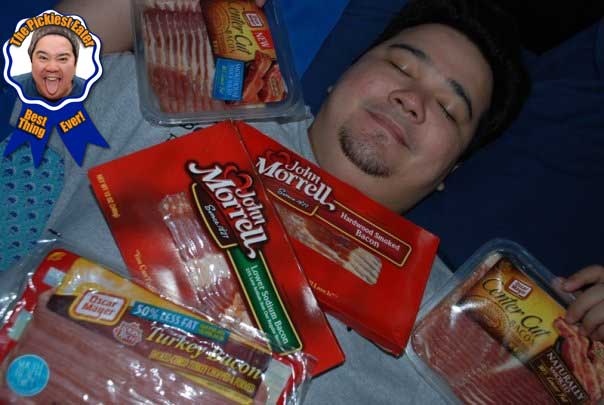 Apparently my audition for a role in "American Beauty" didn't go so well..


Yes, my Ninang Pochay sent me Bacon. "But you can get bacon here!", you might say. Yes you can, my young Padawan, But guess what? She sent me FIVE KINDS OF BACON. Five kinds that I can assure you, you will not find here.

They were honestly all delicious, and I couldn't pick out a favorite among the four pork products. (Sorry Turkey, but there ain't faking bacon) Of course when I got home, I had to take a picture of it, American Beauty Style. (It actually felt really nice having packs of bacon on me)

Bacon really is one of the best things ever. Nuff Said.

Thank you so much Ninang Pochay, and to my cousin Nana who lugged these bad boys all around with her for thousands of miles... Love ya Love ya Love ya!!

The other weekend, Rina and I had some visitors over. My friend Karen came over with one thing on her mind. Bacon. She kept posting about her cravings throughout the week, and even called me out on it. Since I received a generous donation of bacon from some people at work, I graciously obliged. 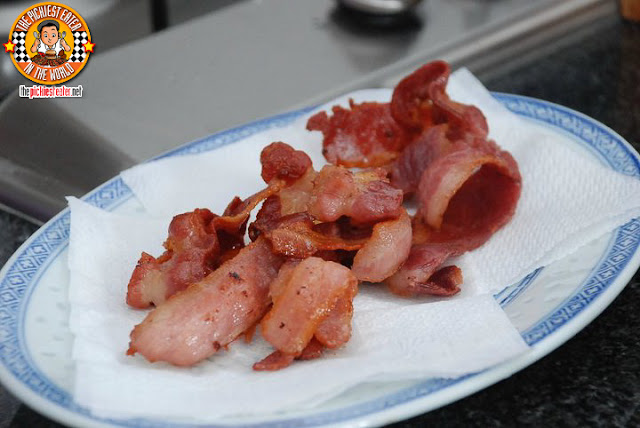 Rina & I prepared BBQ Beef Ribs, Ginataang Kalabasa and Oriental Fish, but all Karen could think about was the bacon. I knew I had to do something about it, because I know what it feels like to be a slave to the heavenly slices of pork known as bacon. 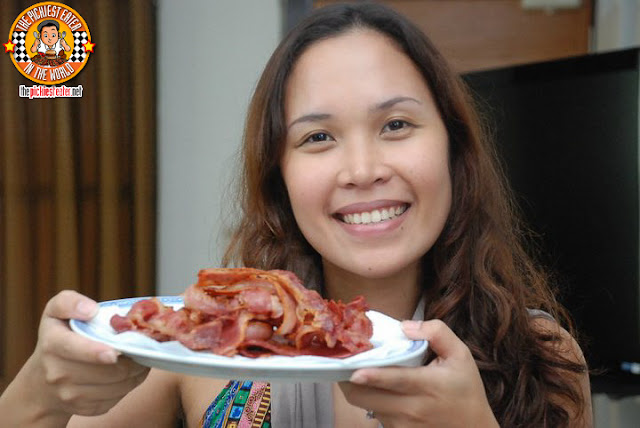 She was actually quite pleased.

There were just so many people in my facebook posting stuff about bacon that I had to post this! Join the Bacon Revolution!
(Viva La Resistance'!)

Wouldn't this be the coolest machine, ever!??!

Posted by The Pickiest Eater at 6:47 PM

Email ThisBlogThis!Share to TwitterShare to FacebookShare to Pinterest
Labels: Bacon, Best Thing Ever, Hall Of Fame