NOTHING FAKE ABOUT PEKING GARDEN 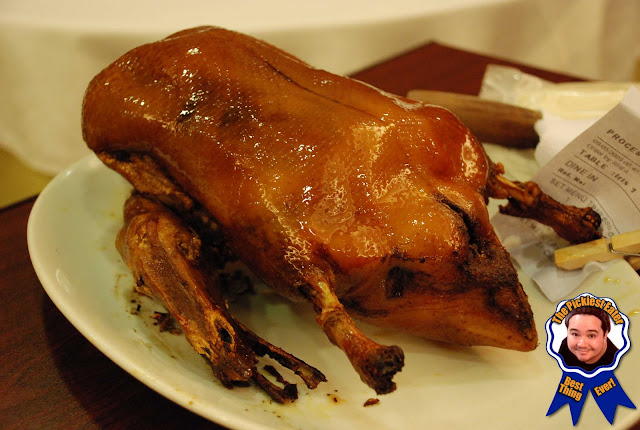 Forget Gunpowder, the compass, and paper printing.. the greatest invention ever to come out from ancient China is without a doubt, THE PEKING DUCK! I went with my Rina and my In-laws to Peking Garden at Trinoma for a family gathering, and nearly passed out from all the duck I ate!

Having your own function room in a restaurant as classy as Peking Garden can spoil you, because you usually have a waiter dedicated to your room, meaning the service was impeccable.The place was comfortable as well, but when you get together with family you haven't seen in a long time, it's hard not to feel at home!

And with me being a Chinese food aficionado, I couldn't wait to try the best of what Peking Garden had to offer.. And I wasn't disappointed!

Rina's Aunt was the gracious hostess of the evening, and she selected from the set menus that Peking Garden had to offer. 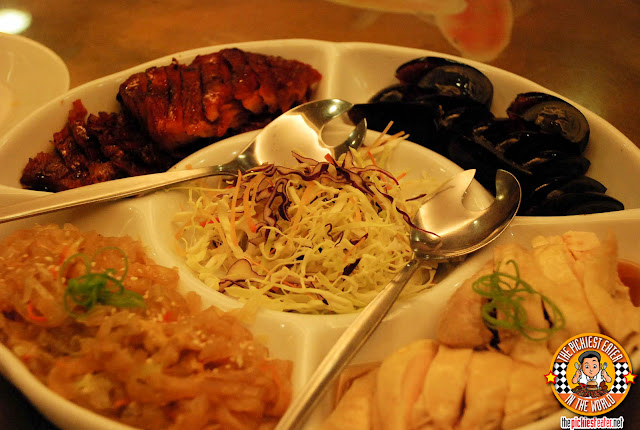 The first thing the waiters brought out, was the appetizer platter, which featured four different classic Chinese appetizers: The Pork Asado, Century Egg, some sort of Seaweed that looks like Ho Fan noodles (almost fooled me), and Steamed White Chicken. As you might have expected, I only ate the Asado and the chicken. The pork was very juicy, and was bathed in a light sauce that added to the sweetness of the meat. The White Chicken was seasoned well enough so that it had just a mild flavor to it.. the kind that demands a second bite. But I love mixing it with the ginger sauce. Sorta like a poor man's Hainanese Chicken hehe.. 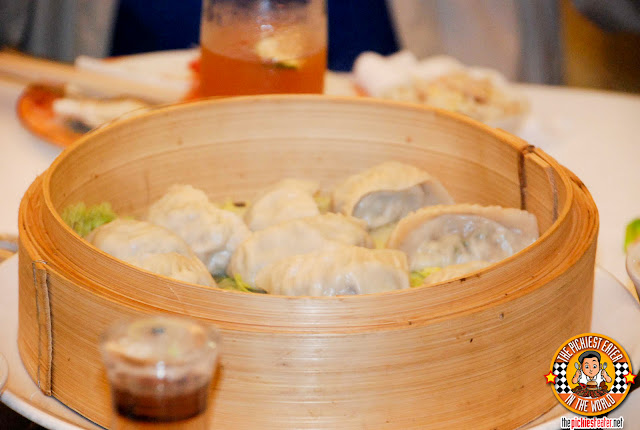 Steamed Vegetable Dumplings? No thanks. 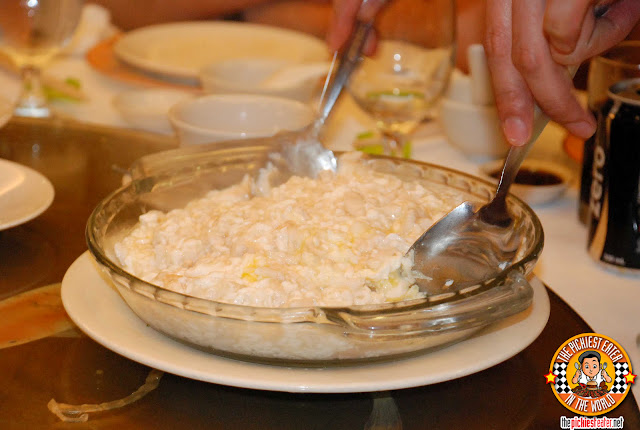 Scallops or no scallops, I didn't go all this way for an Omelet

Rina really liked this Scrambled Egg with scallops dish that they served. I didn't try it though, because, well, I don't like scallops. She added a little soy sauce to it, and she was good to go. 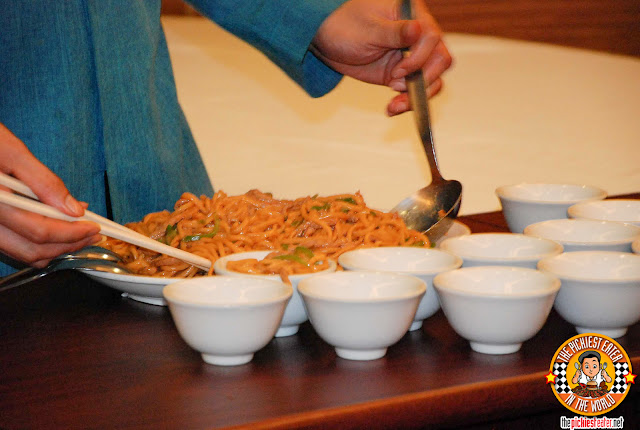 The noodles they served us, the Hand Made Noodles with Shredded Beef and Green Peppers was fantastic! The beef was so soft and melted in your mouth with every bite. I love dishes that uses thick noodles, and the thick sauce coated each strand perfectly, yet never rendered it soggy. I guess hand made noodles truly are far more superior than store bought. hehe. 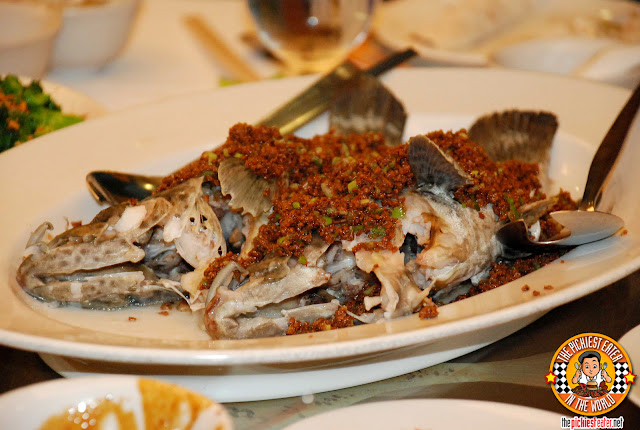 This was seriously good.

The Steamed Lapu-Lapu with minced Garlic was also amazing. Again, the key was how well it was seasoned giving it just enough flavor on its own, so that it can stand by itself when eaten even without the topped garlic bits. 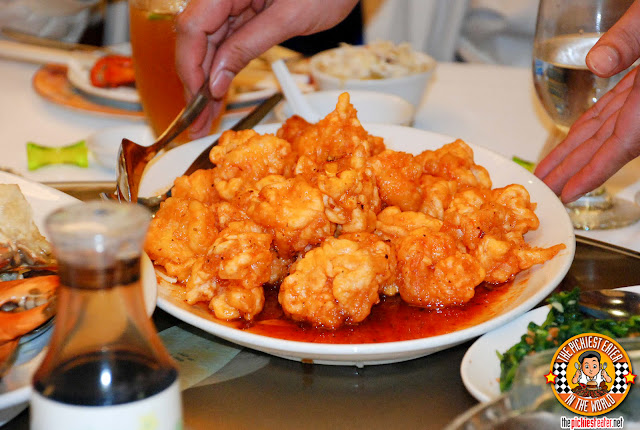 I don't eat prawns or shrimps, so I wasn't really impressed with this dish (Prawns with Sweet and Spicy Sauce I think it's called), even though Rina and her whole family seemed to be. It seemed like a sweet and sour type of dish, but with rolled up shrimps. I would've just used pork or chicken. but that's just me. Yep, I didn't try it. 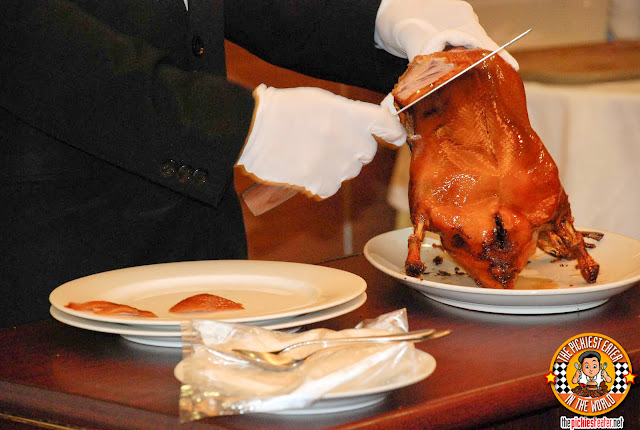 Here we go.. let's get down to business..

This was undeniably the main event. Despite all the spectacular oriental culinary creations in front of us, everyone had their eyes on the duck. The Maitre' D slices the duck right in your function room, so you know you're getting your money's worth. It really is impressive how easy he makes it look. every slice gets harder and harder to do, but he manages to make every cut look presentable when placed on a plate. (I'm guessing if I tried cutting the same thing, It would've ended looking like ground beef) 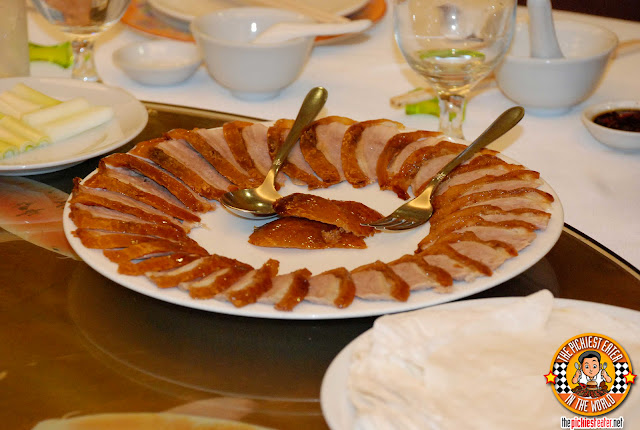 When the slicing dude was done doing his thing, I was really amazed with how clean the cuts were. To think he did it so quickly and right in front of us. But then I got over it quickly upon smelling the duck, and realized that I should just stop staring at the duck and actually dig in. I cold swear I must have had at least 10 of those wraps. Placing the duck meat, and a strip of crispy, and super juicy skin unto the warm wrapper, and dabbing on some hoisin sauce just for good measure, with or without the spring onion, I guarantee you, it's one of the best things, ever! 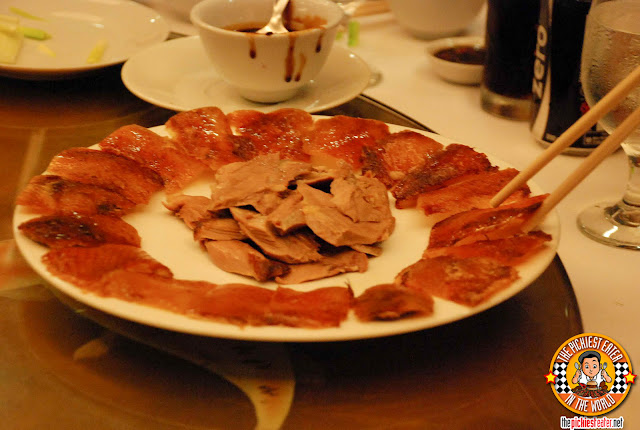 The skin is definitely the best part of the duck. In case you haven't noticed, I like adding crunchy things into my food, and this was the ultimate crunchy thing. Yes, I know, the oil content will send your cholesterol level off the charts. But I never said this was a "Healthy Blog", right? 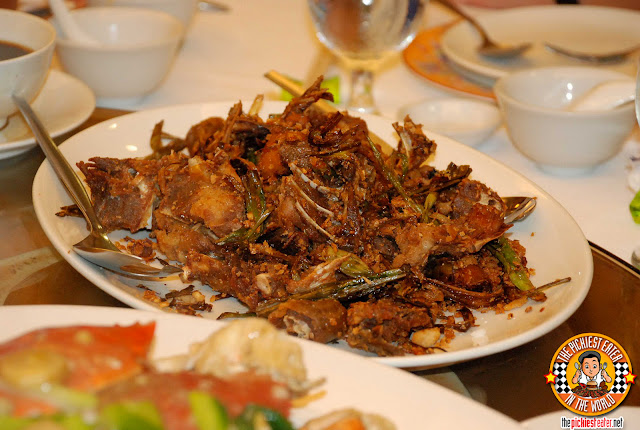 Forget Max's, THIS is what you call "Sarap to the bones!"

After they they stripped the Duck of all it's skin and meat, they took the bones back into the kitchen. I initially thought that they were going to use it for a broth and make a soup or something to that effect. It kind of struck me as strange, though, because we were halfway done with the meal, and it would be an odd time to have some soup. But I was wrong. They took the bones and whatever was left of the meat, and deep fried it in peppercorns. Pure genius. Everything on that plate - including the bones, you could chomp down on and eat. the bones would now crumble in your mouth and the shredded meat had a light spicy tinge to it, that made you crave for more.

By the end of the night, I couldn't move my head anymore, let alone my whole body (cuz of my tummy). It's true though, the oiliness will get you in the end, although I'm proud to say it wasn't as bad as I thought it would be. In all honesty, I've gotten high blood from taking a bite of a "Chicharon Bulaklak" before, but as fatty and oily as this Peking Duck was, it didn't really get me that badly. (nothing a couple of advils couldn't take care of)

If you do get a chance to go to Peking Garden, I seriously suggest you try their Duck. Don't forget to have them cook it peppercorn style as well!

On another note, Trinoma's parking building really sucks, but there are quite a few restaurants there that I wanna try.. Five Cows, I'm talking to you..

Oh and by the way.. Tita Lourdes, Thank you for the wonderful meal!
Posted by The Pickiest Eater at 4:46 PM