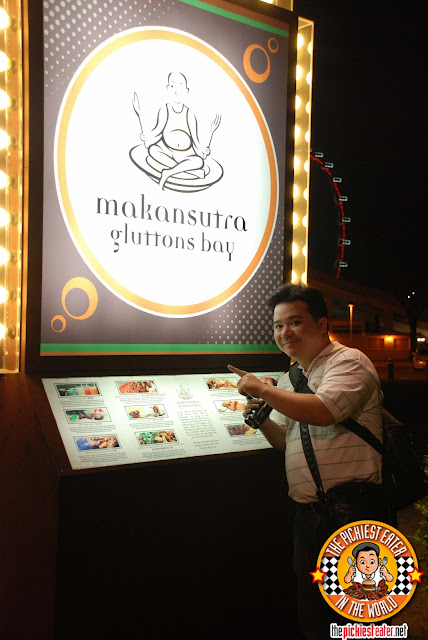 "Glutton's Bay" could very well have been my birthplace.
I was so sleepy during our Duck Tour drive around the city, that I can safely say that I can't really remember a lot of the things our tour guide said. I can't recall the story of the war memorial, nor do I remember the name of the tallest hotel in Singapore. But what was clear as day, was that he said, "Food Lovers, you can't leave Singapore without going to Makansutra."


Just like Food Republic, Makansutra was among the many recommendations that my friends suggested to me when i asked for place to eat in Singapore. According to our guide, Makansutra is a popular food center that features a collection of the best "Hawkers" in the country. He had me at "Food Center'.

This post marks the first time I'm going to be doing a "Video Review". I'm a bit new to this sort of thing so you're going to have to forgive me if it's not any good hehe.. See the video here:


THE PICKIEST EATER VISITS MAKANSUTRA SINGAPORE!
from richiez168 on Vimeo. 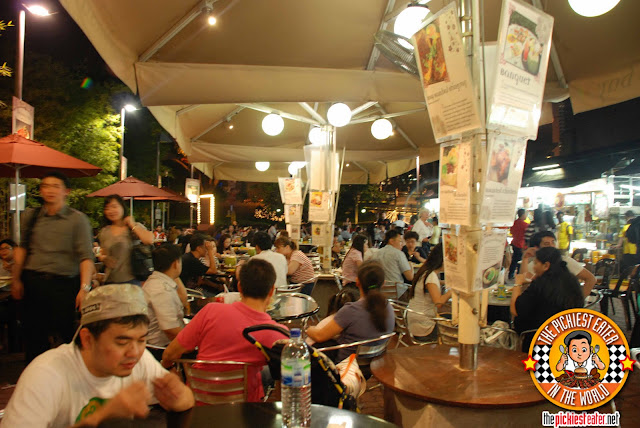 Everyone looking for a place to sit
We got to Makansutra at around 9pm, and it was jam packed with people. Even though we were starving from our long day at Universal Studios, we were still determined to find a table and get something to eat. It was cool seeing a whole bunch load of Pinoys all over the place too, but until I found a table, my stomach considered them "The Enemy".

Eventually, we found a table, so no blood was shed. 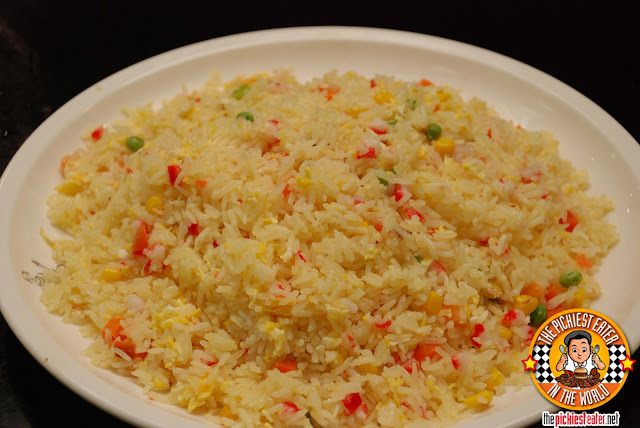 Yang Chow. ALWAYS Yang Chow.
Their Yang Chow Fried Rice of Sewan Seafood Cze Cha, wasn't anything really spectacular. It had a bit too much Scallops in it, for my taste, and the rice itself wasn't so soft. It was the type that kinda fell apart grain by grain,  when scooped up. 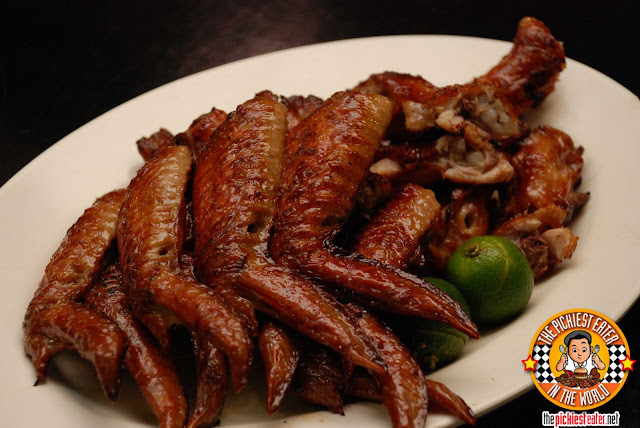 Ain't no thing but a chicken wing
Rina's BBQ Chicken From Huat Huat BBQ Chicken Wings were truly delicious. It was grilled to perfection, with the skin being charred just right, but the meat of the chicken pristine white and tender. It didn't rely too heavily on a sauce, although it did have some sort of glazing to it, that gave it a slightly sweet touch. 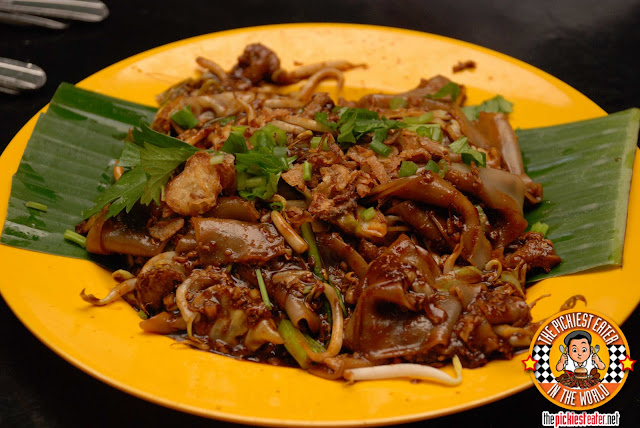 I still have problems remembering how to pronounce it.
The Char Kway Teow noodles that I ordered from Kampong Wok was totally not what I was expecting. As I mentioned in the video, was expecting something like Pad Thai, but instead, I got a dish with the strong taste of Shrimp Paste (Bagoong). If I tried it without any expectations of a certain taste, I probably would have enjoyed it more (I'm weird like that). 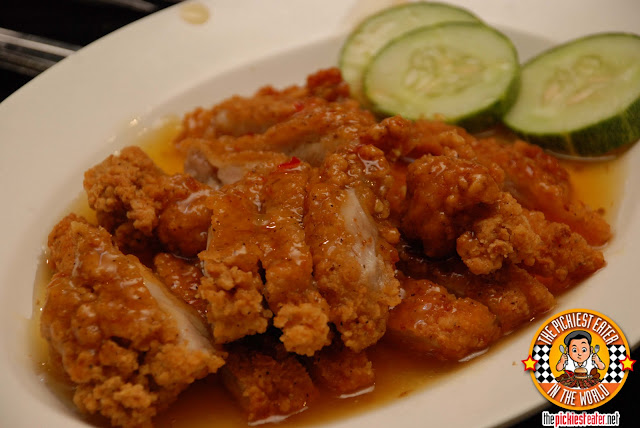 I would SWIM back to Singapore for another plate of this bad boy
I have got to say, the Lemon Chicken of Sewan Seafood Cze Cha is absolutely fantastic. It ranks easily among the best I've ever tried in my life, (and believe you me, I've tried A LOT). Rina usually doesn't like Lemon Chicken because it's sweet, but this was one she got on board with, simply because they used more of a "Sweet Chili" base than they did, actual lemon. The chicken was cooked wonderfully, and the bread coating that they used had a nice peppery tinge to it that helped enhance the flavor of the chicken. 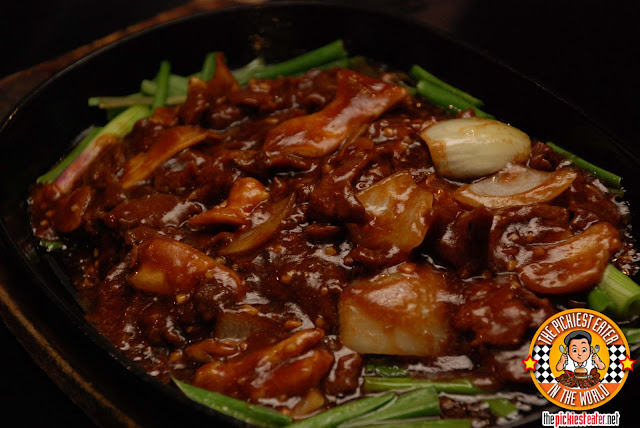 The sound of a sizzle is music to my ears


Another gem of the evening was the Sizzling Beef with Ginger and Spring Onions, also from Sewan Seafood Cze Cha. The slices of beef were so tender, it virtually melted in your mouth. What I liked most about it though, was the generous helpings of meat, that was beautifully coated with the thick sauce. Usually in plates like this, you get an overwhelming amount of Onions and ginger, but this time, the beef, thankfully, was the dominating factor of the dish. 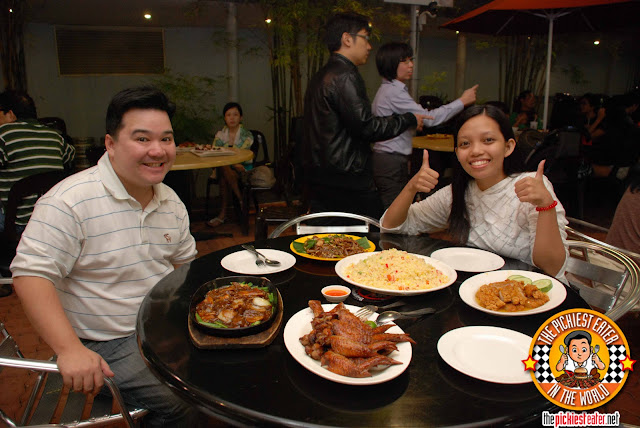 Just before we were about to launch our attack
There was so many other things I wanted to try there, including the the "Fried Carrot Cake" and the other noodle dishes, but since the girls over-ordered, I had my work cut out for me. Everyone keeps telling me we should've ordered the Chili Crab, but I don't eat crab, and considering the amount of food we ordered, I don't feel short changed at all.
The funny thing was, the girls took the food home with them, hoping to bump into a street kid or beggar or something to give the food to. But to our surprise, we could not find a single one. Even in the Geylang area, which is supposed to be the seediest part of the country!
MORE PICTURES 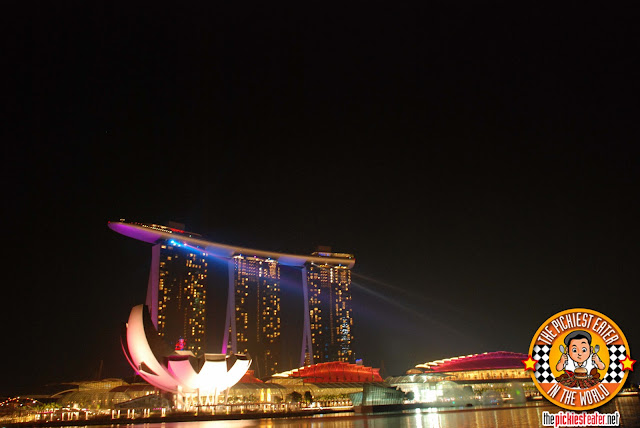 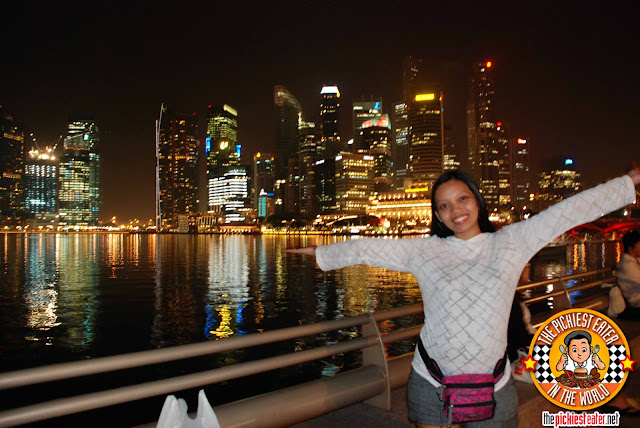 Chaikka enjoying the breathtaking cityscape of Singapore at night 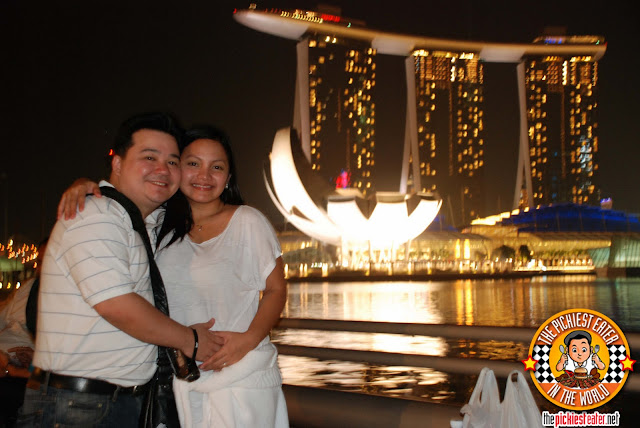 Rina and I wondering which one of us is really pregnant.