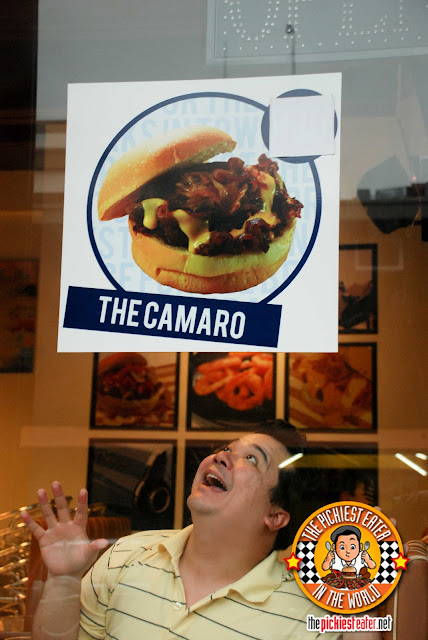 Among my immediate family members, only my sister Raquel checks out my blog with any form of regularity. My Sister Rosemarie and my brother Ryan, do not at all. However, one time, Ryan DID stumble unto my blog when he asked me if I had eaten in Kogi Bulgogi before. He took a look at a few posts and his only comment was, i'm too "mainstream".

Yeah, to be honest, that's not something I can really contest. But what can I do? You hear about a place, then you wanna go check it out. It's not my fault if it's usually located in a mall or something.

So when Groupon Philippines had a promo for "Phily's Diner", a place I had never heard of before, I thought it would be a good opportunity to uncover another hidden gem. 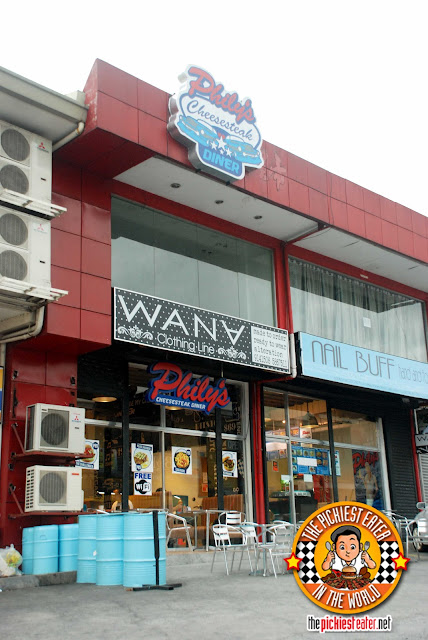 Took us awhile to find it


"Hidden gem" is a good way to describe it, because we really needed to go around Ortigas Home Depot to find this place. From the front, we circled to the back, then all the way around, only to find out that it was near the place we entered in. For those who intend to go, It's right beside "Mini Stop" and right in front of Big Bert's Car Wash. We were thisclose to going home, thinking that the place didn't really exist, and I got conned out of P200 bucks by Groupon Philippines. Luckily, we found it, and all was well in the world. 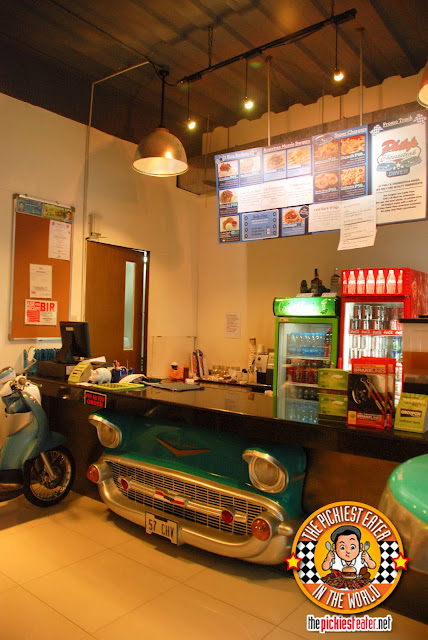 No Parking Zone
The place gets half marks for trying to capture the 1950's "Diner" feel. I say half marks only because only the counter area of the place has the diner feel, complete with the front of a Chevy '57 and an old school vespa. The dining area half, goes more generic, but has pictures of Marilyn Monroe and other 50's icons to keep up with the theme. 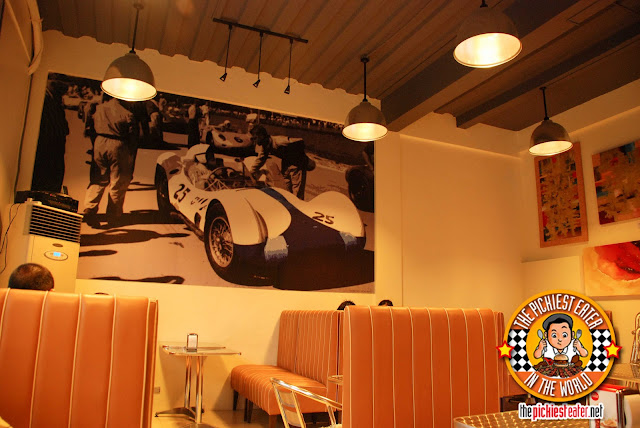 Before I start writing about the food, I want to get this out in the open. Phily's Diner has something good going on with their meals, but their service needs to improve. They have fantastic tasting, yet ridiculously cheap food, but they won't be winning awards from the Department of Health any time soon. When we arrived, the table behind us had left, leaving their table in a complete mess. The place wasn't really packed when we went so there was no excuse for the waiting staff to not bus out the tables. Yet, when we left, the mess of the table behind us was still there. When you look at the floor, there were dirty tissues scattered all over. And even when the waitress gave a table a quick "wipe", you can still see the steak bits left on the table.. and they DON'T bother to clean it up. It was a major turn off to me..

Which was a crying shame because, as you'll see below, their food is worth coming back for. 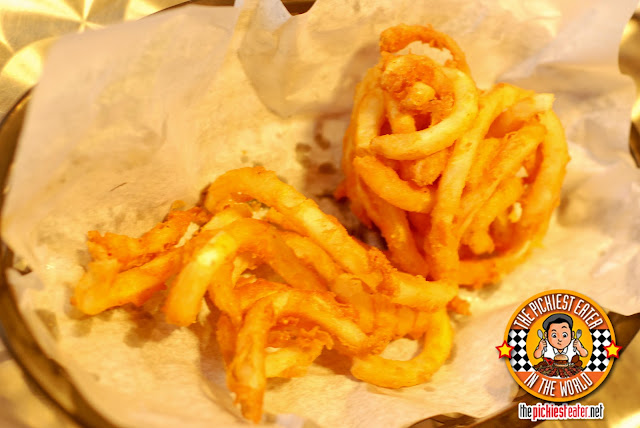 I got a thing for curly fries, so I couldn't resist ordering their "Coil Lovers" (P50). It was a decent curly fry dish that wouldn't make McDonald's quake in their boots, but still rather good. Perhaps my only qualm was, when they served it to me, a big bunch was clumped up together. That's something they could have fixed, by simply separating them in the deep fryer. 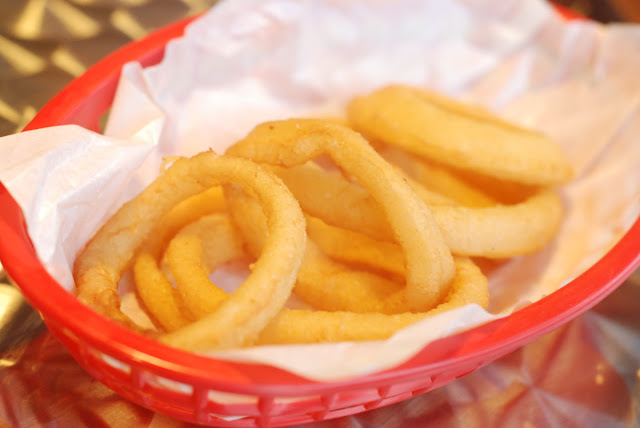 Do the hoola hoop


The Hoola-Hoop Onion Rings (P50) were a much better effort. It was coated beautifully and fried to golden perfection. The onion had a delicious sweetness to it with every bite.. A solid side dish or appetizer, I actually saved some to stuff into my sandwich later on. 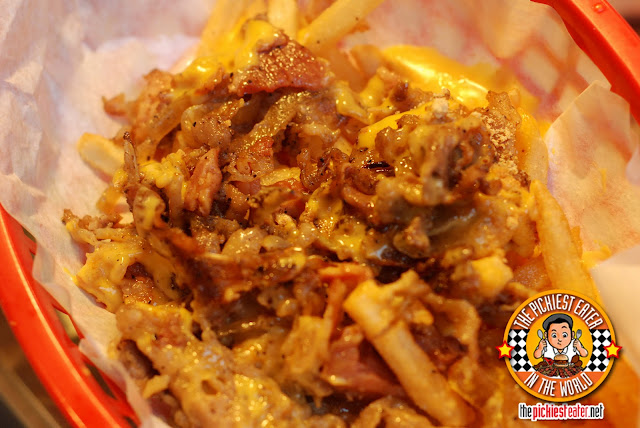 Whoever thought up of the "Turbo Steak Fries" (P85) is a brilliant, brilliant human being, and I would like to give him/her a shake of the hand, and a (platonic) kiss on the cheek. It's basically all the components of their Cheese Steak, but placed on a bed of french Fries instead of on a bun. You can't really consider this an appetizer because it's so heavy, it's a meal in itself. I really enjoyed this however... 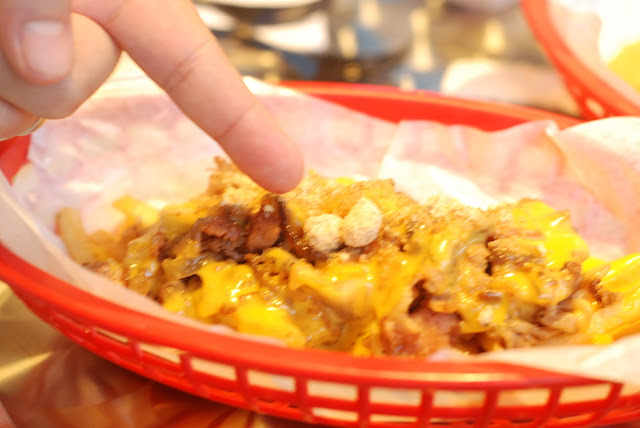 Two balls on my fries?

They topped it off with some sort of BBQ powder, or seasoning.. But again, they weren't very mindful when doing so, because the powder came out in clumps, and looked all gross. I basically just mashed the power balls down and mixed up the fries, but I don't think that's something that should have gotten past quality control. I'd still order it in a heartbeat though. 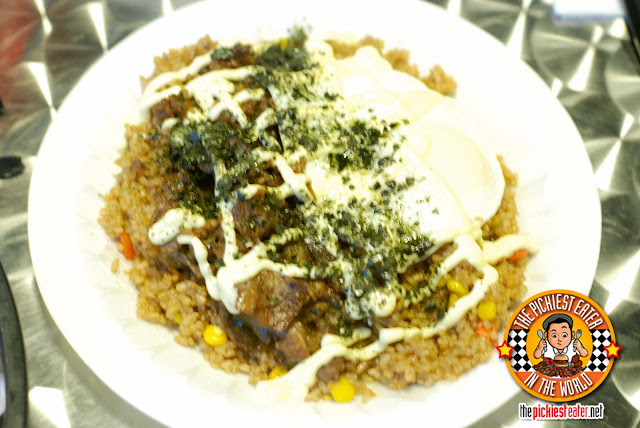 Rina ordered the Pearl Harbor (P85) which was their US Beef strips, sauteed in a sweet "Shoyu Sauce".  Japanese Mayo is squirted unto the dish, and together with some crumbled bits of Nori. The dish is accompanied by a fried egg and a generous serving of fried rice (sauteed with corn and carrots). Rina is a big fan of that Japanese mayo, so she had wonderful first few bites. UNfortunately for her, mid-way through the plate, she found the taste a bit "Nakaka-umay" (I still don't know the english translation... anyone know?). Basically she got sick of the taste really easily. Personally I don't eat seaweed, so I didn't like this at all. 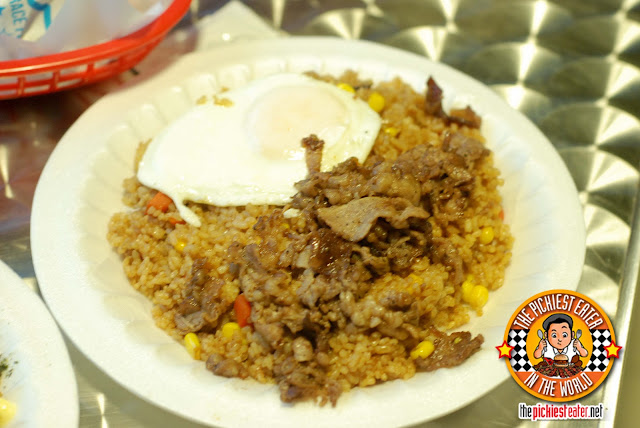 The "Philips Pick" (P80) fit more of my taste. The super tender meat was excellently seasoned, and had little peppery punch to it. Again, this dish was accompanied by a fried egg and lots of fried rice, which I really enjoyed (I actually took home my leftover rice, but Rina ate it the next day, using the "But the baby was craving for it" excuse). At P80 bucks, this dish is a steal! 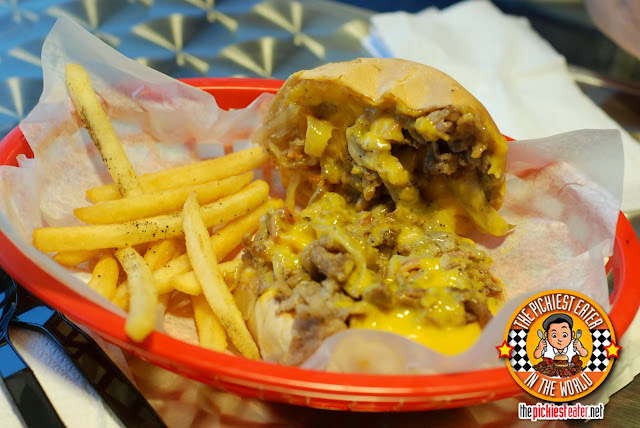 The girl at the cashier strongly suggested I try the Challenger (P85). And since it had everything I look for in a sandwich (Bacon, Caramelized Onions, Cheese, Bacon, Steak, Bacon), I could not resist. This sandwich was awesome. Having just come from "Elberts Cheese Steaks" just the week before, It was refreshing to see that It's possible to come up with a delicious US BEEF cheese steak for only P80!! I'm no chef, but their cheese sauce seems to be a creamy blend of melted Cheese and butter, and is absolutely delicious.  Had I not ordered anything else, It's very possible I could've wolfed down another one of these bad boys (However if I did, Rina would have had to roll me home). 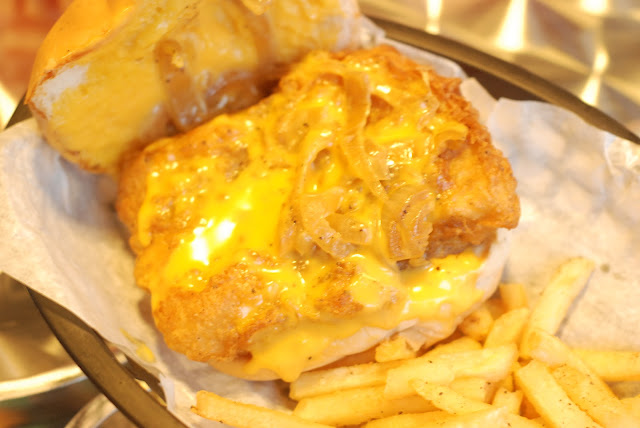 They also have a version using their kick ass cheese sauce using Crispy Cajun Chicken fillet, called "The Thunderbird" (P85). The "Cajun Flavor" got lost in the cheese sauce and caramelized onions, but it was a very well cooked piece of chicken, that was very juicy in the inside. 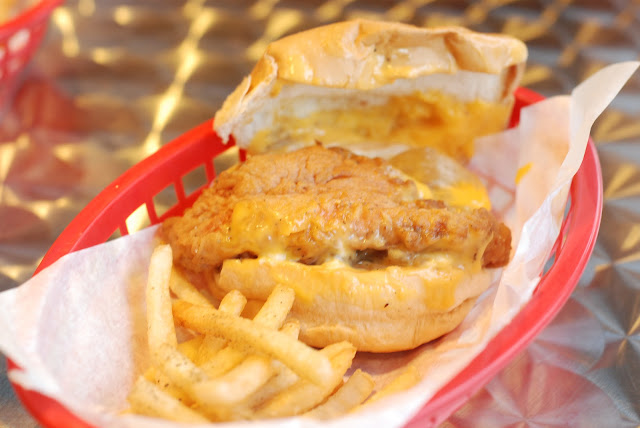 For their more.. Umm.. "Health Conscious" patrons, Phily's offers up a fish fillet sandwich, called "The Corvette" (P80). I think they used Dory, because I took a bite out of this crispy sandwich and bit through the pure white fish meat, that melded wonderfully with the sauce. 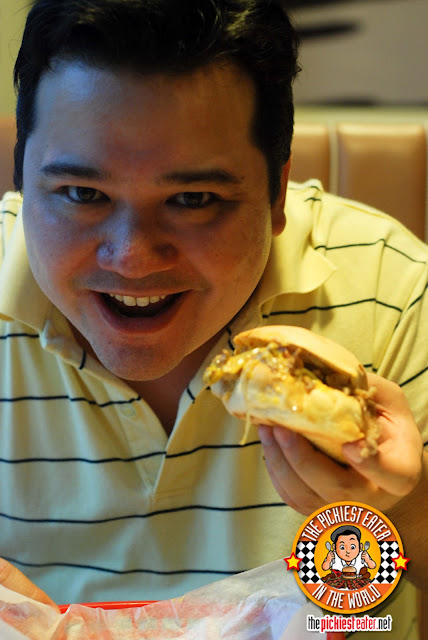 Phily's is an amazing discovery, and not just because of the cheap food, either. Despite its bargain basement rates (The most expensive thing on their menu is only P130 bucks), the food actually delivers something truly awesome.Even if you opt to "Double beef" (P40)  or double cheese your sandwich, or double egg (P15) your meals, it's still pretty cheap! One Provolone Cheese Steak from Elberts cost just a little less than everything I ordered above!

Now if they could just take seminars in restaurant cleanliness, then they'd be good to go! 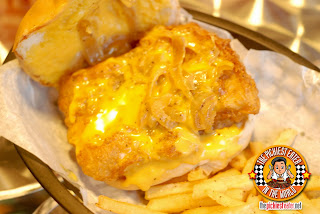 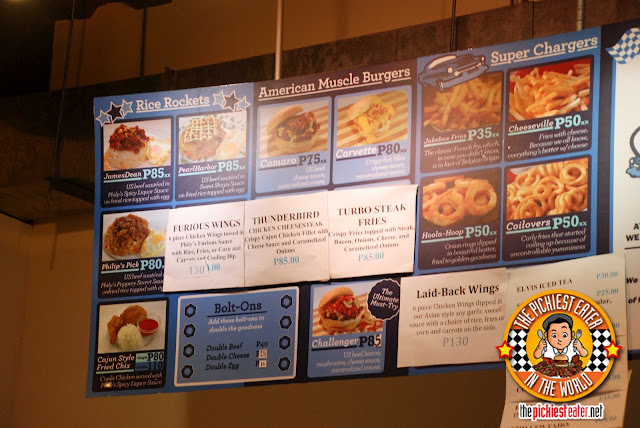 Posted by The Pickiest Eater at 1:00 PM