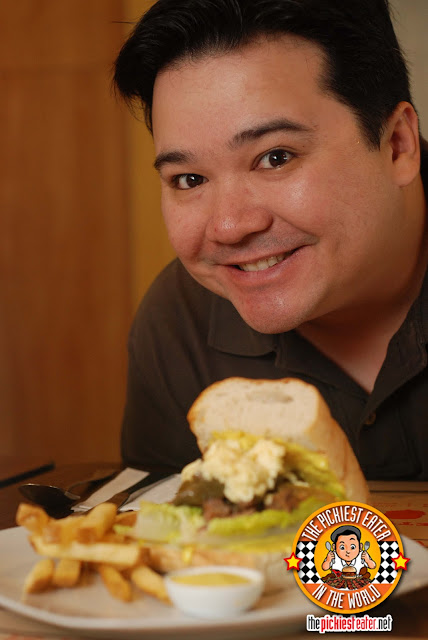 I was surfing the net, minding my own business when I..umm..  "accidentally" ended up on the group buying site known as "Deal Grocer" (I'm really not an addict). As I mentioned from my previous Group Buying post, this was the same site that used a portion of my blog in their review of "Mochiko" (That statement is totally irrelevant to this post, but i just thought i'd mention it). I had never heard of the restaurant "Hyphy's" before (hell, I wasn't even sure how to pronounce it), but the name Bruce Lim did ring a bell with me (And not just because it sounded like Bruce Lee, either).

The deal was "Pay P350 for P500 worth of food", so I thought it was worth a shot. Besides, I hadn't been to "The Veranda" in Robinson's Galleria yet, so I thought it would be nice to be able to drop by there for the first time in almost two years.

Hyphy's boasts of San Francisco inspired comfort food with a Filipino twist to it. Honestly though, at the moment, apart from "Rice-a-Roni" and Clam Chowder, I can't think of any other food that is associated with San Francisco, so i figured our trip to Hyphy's would be an interesting experience. 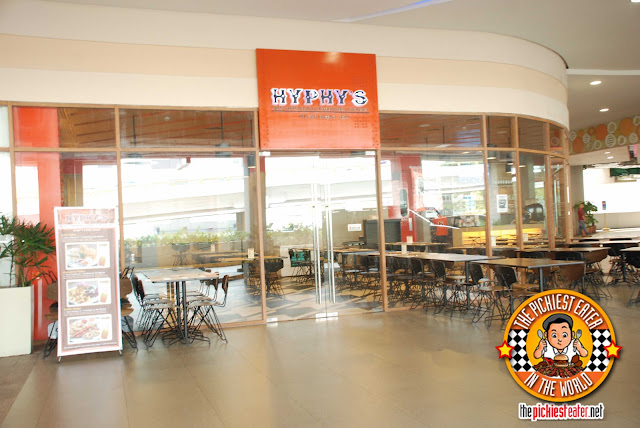 
The place has a comfy/casual feel to it, without the ruggedness of a sports bar or watering hole. It doesn't try to oversell the whole "San Francisco" concept to you. In fact, apart from the signage outside that states "San "Francisco - Philippine Cuisine", the only allusions to the you'd get to the City By The Bay would be the Black and Orange colors of the San Francisco Giants - and I doubt you'd get that if you weren't a sports fan. 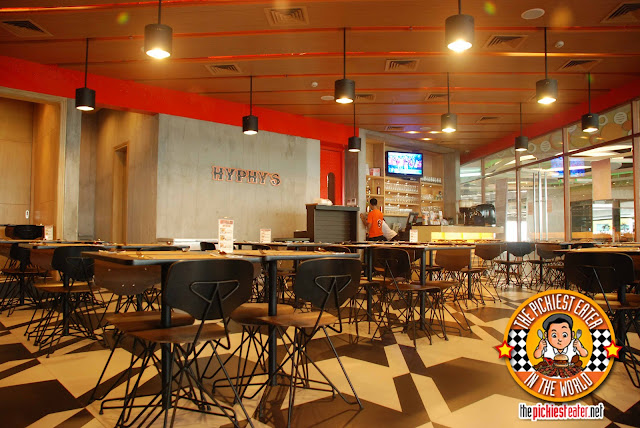 Although we were the first guests of the day, I thought we were going to have a problem at first with the service, because our table was a bit far from the counter where the waiting staff hung out, and we weren't easily visible.

It turned out, nothing could have been further from the truth. One thing I have to say about our experience at Hyphy's was, their waiting staff did an impeccable job in making us feel at home. Look, I've said this before, and I'll say it again, I'm not expecting to be treated like royalty every time I walk into a restaurant.. However, I do require you make me feel at home.. not like i'm trespassing on your property or something to that effect. 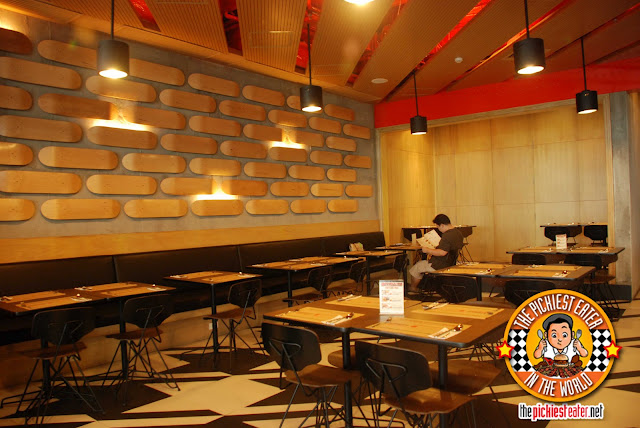 As usual, we were the first ones there


The staff was courteous, without being too stiff. In fact, they would drop by our table every so often to chitchat a little bit about items on their menu and their promos, without sounding like an Electrolux salesman. They knew when to come in and ask how we were doing, and they knew not to stay too long to give us some privacy. If I recall correctly, our waiter's name was Jerome or something like that, and he efficiently assisted me in my orders (There's a little flub in the menu, that shows a picture of their Mac and Cheese but with the name "Baked Macaroni" in the caption, so he clarified which one). But there were a few things about the service that left a question mark on me.. 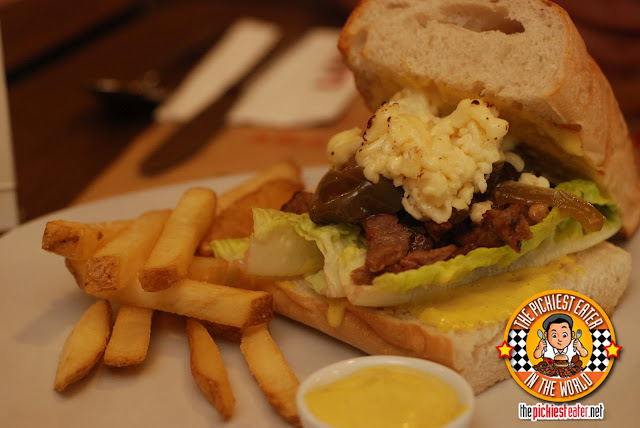 Whole or Half? You be the judge..

As evidenced by my visits to Elbert's Cheese Steaks and Phily's Cheese Steak Diner, I'm a sucker for a good cheese steak. I wanted to see how Hyphy's SF Steak Sandich (P290) would fare against those two, and as it turns out, pretty darn well. The baguette had a crunchy exterior but was amazingly soft on the inside. The beef was seasoned beautifully, and the sauteed peppers and onions was a great enhancement to the flavor.. This was one of the few times I didn't pick out any of the veggies from my sandwich! Though the cheese wasn't melted at all, it had some charring to it, so i'm assuming they tried melting it with a torch or something.. It also lacked color because they seemed to have forgotten to put red peppers on it.. but it didn't matter because everything that was in the sandwich worked together to perfection.

Now my problem is this. Look at the picture above. Does THAT look like a whole sandwich to you? If you see this picture, and you see the one on the menu (see below), it only looks like HALF of a sandwich. And here's the thing..

I asked them to split the sandwich in two, and they did not. They only gave me this. When I asked if this was a half or a whole sandwich, they (politely) insisted that this was a WHOLE sandwich. Seriously, I could've taken that on in three bites, But I told Rina we'd split it, so I had to restrain myself (which was difficult, considering how good it was). I think P290 is a reasonable price to pay for the sandwich if it was the size of the one on the menu. But when you compare it to the size of the sandwich I got, well.. in the immortal words of the great Mercedes Jones, "Hell to the no!".

1) If that's the size of the actual sandwich, then they should really
change the picture on the menu because it is totally misleading and
not worth the price.

2) If it's an error on the part of their staff, then Hyphy's owes me
half a SF Steak Sandwich.

Take note, I'm only making this case because I really enjoyed it. 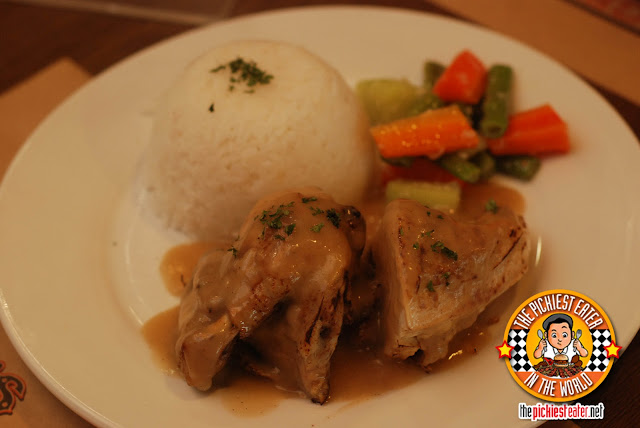 As soon as they placed the Roasted Chicken (P290) in front of us, I realized I committed the cardinal sin on not asking for a thigh part *face palm*. Instead they gave us breast, which I normally don't enjoy. However, the chicken was roasted so well, that it still had the juiciness of dark meat. What made this feel even more like comfort food was the gravy. It had a certain creaminess that was so good, Rina boldly declared, "I could eat the gravy alone with the rice". (If she told me that earlier, I could've saved P290 bucks hehe) 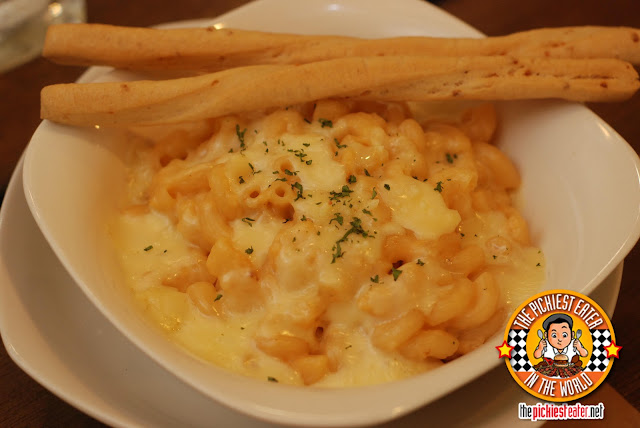 Rina has a love affair with Mac and Cheese, so I knew she would not forgive me we left Hyphy's without trying their version. Considering they used a blend of mild Cheeses, Hyphy's Mac and Cheese (P220) could have stood to use a little bit more salt. Although the gooey consistency screamed "comfort food" (Which is what they were trying to go for), I was hoping they baked it a little more to get those little burn marks on the cheese like the picture on the menu suggested. Regardless, It was still a rather good dish, but my least favorite of the three. 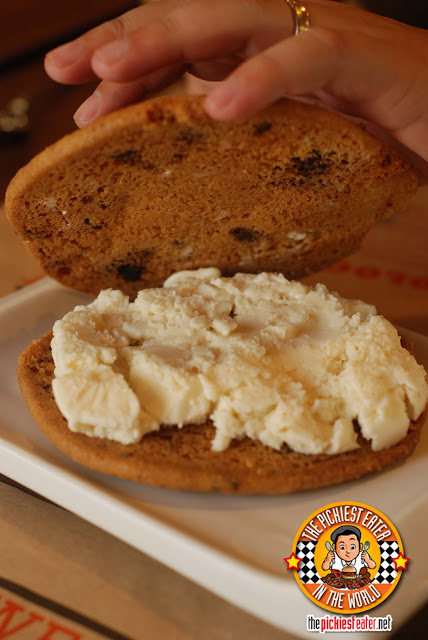 
I was very disappointed to find out that the only desserts available was the Choco Chip Sandwich and the Tablea Chocolate Torte (I was really looking forward to the bread pudding). Since I'm not into dark chocolate, we had the Choco Chip Sandwich instead (P120). I was hoping for something along the lines of Coney Island's Eskimo Pies' that I would have when I was a kid (Man I miss those), but I was a little bit surprised to find out that the cookie was crunchy instead of chewy. Don't get me wrong, the cookie alone was delicious.. It definitely had some buttery goodness to it, but at the same time, a few more chocolate chips in the mix wouldn't have hurt my feelings either.

Also, they Vanilla Ice Cream they used had a tartness to it that gave me the impression that it was frozen yogurt they were using instead of ice cream. I asked if they made their own ice cream in-house, but was told that they have a supplier for it. It wasn't bad tasting ice cream at all, but I was looking for the creaminess of Vanilla ice cream, but instead, I got something reminiscent of what I would find at Golden Spoon. Since they do serve Frozen Yogurt at HYPHY's, I wouldn't be surprised to find out that they used it as a substitute because they ran short on Vanilla Ice Cream.


Also, it was only after we finished up dessert that I read the menu once more and saw that the Choco Chip Sandwich was supposed to be "served with a warm chocolate sauce".. but sadly, ours was not. I think that the Chocolate sauce would have been a great match to offset the buttery-ness of the cookie, which after awhile, felt like it went a little overboard (I still need to find the correct translation for "Nakaka-umay"). 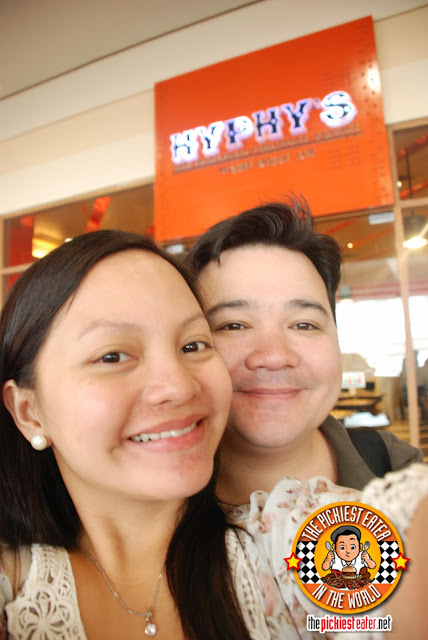 
For a "Chef Bruce Lim Restaurant", you would think Hyphy's have better plating than they do. Although, I enjoy the fact that there are no pretensions to their food, their plating might be a little bit too bland for a restaurant of its caliber.

But one can't deny that Chef Bruce Lim does know his food. I'm not a fan of seaweed, so I wasn't interested in trying their "Spam Masubi" which everyone seems to be raving about (Also, voucher or no voucher, I couldn't find the logic in plunking down P300 bucks for a dish whose main component is "Spam"). I'm pretty sure my sister Raquel would be interested in trying their Sisig pasta.. Being the Picky Eater that I am, I deliberately played it safe with old favorites.

I would most definitely go back to Hyphy's some day to try their other dishes though, and hopefully I'll get some answers about whether or not they served me a whole sandwich or accidentally just the half. 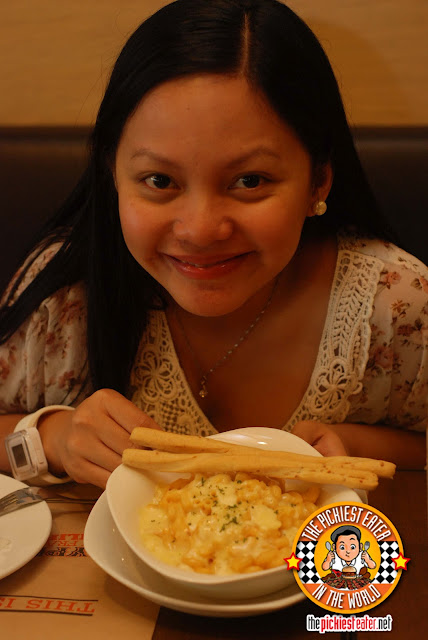 One last look at the smile of Rina's face
when she sees anything with cheese on it.

See how big the SF Steak Sandwich looks in the picture?
Compare it to my order. I'm telling ya.. Something ain't kosher.

Posted by The Pickiest Eater at 11:31 AM