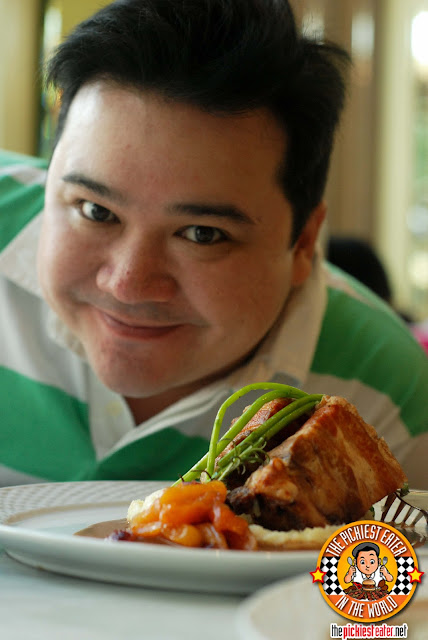 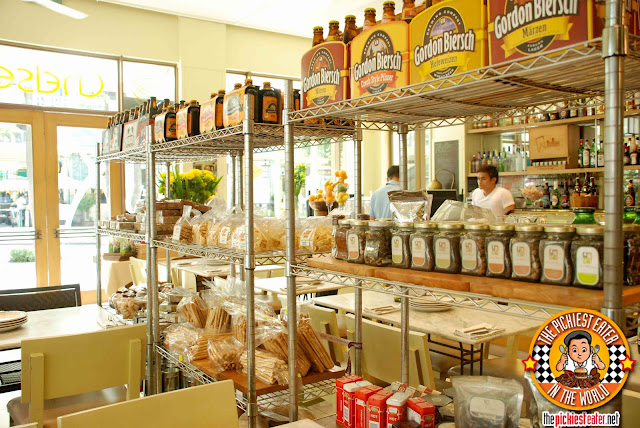 Go crazy over the choices

Like Mr. Jones, the interiors are very impressive. But unlike Mr. Jones, which seems more like a hodge podge of Americana Memorabilia, Chelsea Market's simple, clean lines, with subtle touches of color. The big picture windows that allows the sunlight to graze the inner edges of the restaurant and illuminate the entire room just adds to Chelsea's mystique. You could easily believe that you were in a deli/restaurant in Manhattan.

The service was world class. Waiters are attentive, and I don't think there was ever a moment during my lunch there that my glass of water was less than one half full. The dude even went as far as putting the table napkin on my lap for me (It felt kind strange, but it shows how out of the way they would go to "pamper" their customers). 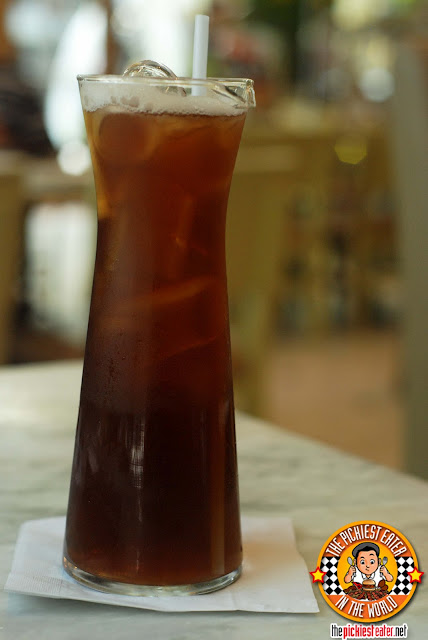 Rina's drink that I didn't get to try

I was intrigued by Rina's order of Iced Tea, which came in what looked like a tall beaker that seemed more at home in a science laboratory than in a restaurant. Regardless though, It looked really cool, but before I could ask to try it, my wife had drank every last drop, so taste-wise, that was a good sign, I guess. ("Eh ang init sa labas, eh!" ("It's so hot outside"), was her defense) 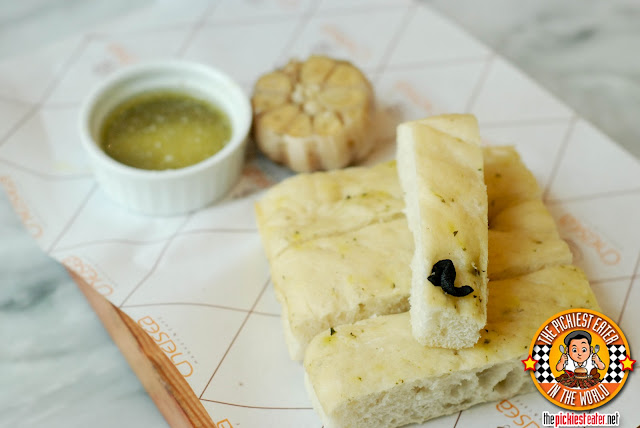 Four pieces of bread in the picture, right?
Let's just say Richie 1, Rina 3. Ahh, the things you do for love.

I was happy to see that we would be getting free Focaccia bread with our meal, but was rather disappointed when i discovered it wasn't served to us hot. In fact, it wasn't even warm. It was just pretty much room temperature bread, with their own balsamic vinegar/Parmesan cheese mix. Since I loved the ones from Italianni's and Buenisimo Rina didn't enjoy the dip and first because she only dipped her bread on the surface of the mix. only when she realized that all the elements that made the mixture amazing had actually settled down to the bottom of the bowl did she appreciate it. 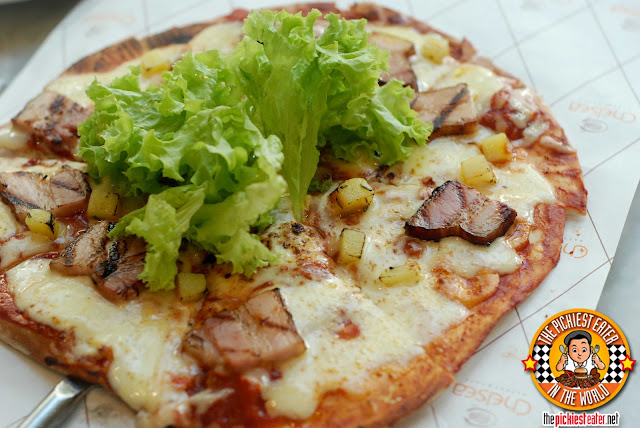 The lettuce looked out of place

In case you missed the first paragraph, The people behind Raintree Restaurants know what to do with bacon, and this Grilled Double Smoked Bacon and Egg Pizza (P450) is actual proof. Though I found the lettuce on top useless (Rina tore off a piece to try it, but liked it without it), everything else was done just right. The crust had an amazing crack to it as you would bite in, and getting a mouthful of the creamy mozzarella cheese that seemed to refuse to let go of the other side of the pizza. I also loved the fact that they added little bits roasted rosemary potatoes unto the pie (It reminded me of when I would go to Shakey's and put mojos on stop of my slice of pizza before jamming it into my mouth. Does anyone else do that? The mojos thing.. Not the jamming into the mouth part).

The tomato sauce was a little bit too strong for my liking, but that's more because of my hyper acidity (It would exact its revenge on me hours later, in the middle of the afternoon screening of "Xmen: First Class") 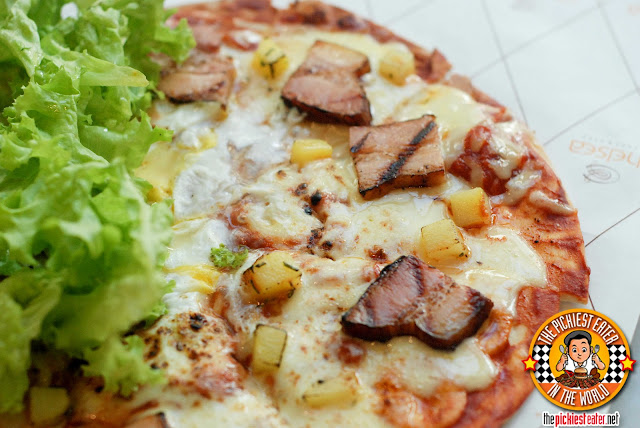 Then it suddenly made sense

The "Egg" in the name, is actually a raw egg cracked open in the center of the pie, for it to cook on the heat of the pizza. It was only then that I realized that the purpose of the lettuce had nothing to do with the flavor it would bring to the dish.. It was all about covering up the disgusting look of a raw egg until it cooked a little bit. It was a little off putting at first, seeing the egg whites run around the center of the pizza, but once it cooked itself, it was all good.

Oh and did I mention.. It had bacon?

Definitely the star of the show was the Grilled Double Smoked Bacon, reminiscent of my favorite dish at Mr. Jones. The thick cut slices of juicy pork awesomeness was charred perfectly, leaving the edges darkened and the bits of fat crispy.

Instantly, one of my favorite pizzas :) 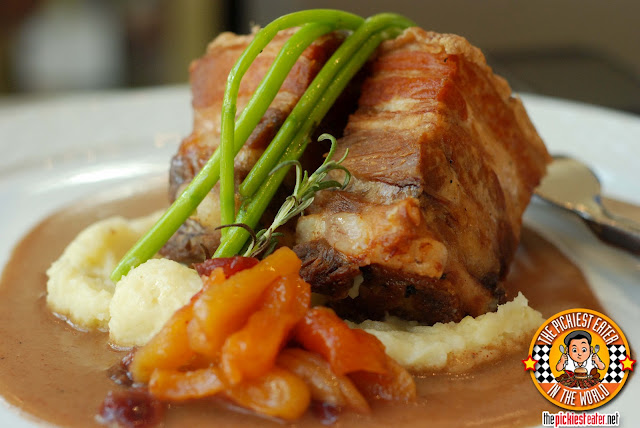 Wasn't as good as it looked

I came into Chelsea that morning thinking I would be ordering their Beef Short Ribs or the Lamb Ribs, but when the waiter suggested their new "Crisp Citrus-Rosemary Roasted Pork Belly" (P495) I got a case of "tunnel vision" and eventually caved. The moment they placed the dish in front of me, I knew I had chosen poorly. First of all, It didn't look like it was Roasted. By the looks of it, and even the texture made me think it was deep fried. Even the texture made it look more like Lechon Kawali than Roast Pork. I couldn't make out the sauce, either. It looked like gravy, but it had a sweeter tinge to it.

With the addition of the Chili Cranberry Apricot Chutney, I was hoping the dish would remind me of the Korubuta Pork Belly I had at Lemuria, but it was far from it. All the facets of this palte were delicious when tasted separately, but when added all together into one dish, it didn't work for me. 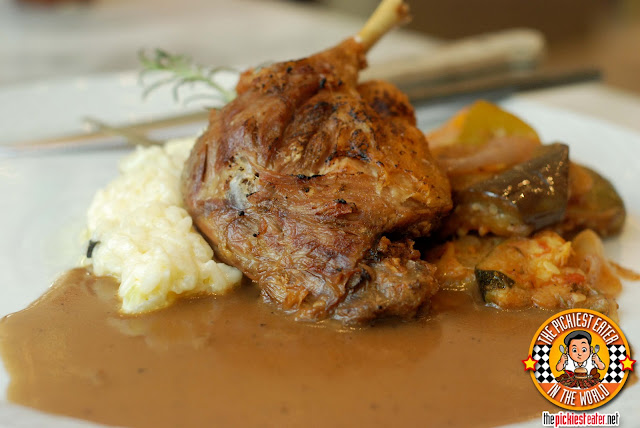 I love you Grandma.. Sniff..

Ever since it closed down, Rina has been on the look out for a risotto dish that could rival that of "The F Word", which used to operate on Palanca Street in Makati (Where the steak house, "Gustavus" currently resides). So when I told her that i wanted her to try "Grandma's Crispy Duck Confit and Mushroom Risotto" (P575), there really wasn't much arm twisting involved. I was wondering what the fine line between "crispy" and "tough" would be, but the duck meat tore off the bone with little resistance. Then true to it's word, the duck let out a crispy snap to it when it met my teeth. The light creaminess of the gravy was a great way of enhancing the duck's flavor. 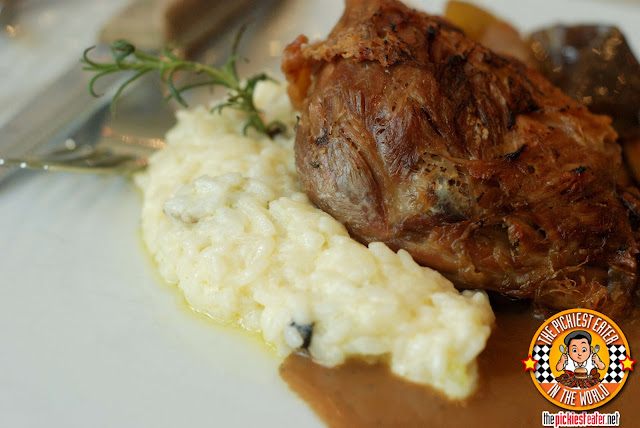 What all risottos want to be when they grow up

But the Show Stopper of this dish was undoubtedly the mushroom risotto. It tastes EXACTLY how risotto should. Buttery, cheese, creamy, all rolled into one. Seriously, this risotto was Roll-Your-Eyes-To-The-Back-Of-Your-Head-Good! This easily made it into Rina's "Best Thing Ever" list.

Perhaps my only complaint was.. There wasn't enough of it on the plate for me and Rina to share! (I would get the evil eye every time I would ask her "Could I have another bite?")


Too bad we didn't have enough room in our stomach for dessert, but Rina made me promise that we'd go back for one of their awesome sounding cakes and pies. (Snicker's Fudge? Banana Crunch Cream Pie? 'Nuff Said.)

Though I didn't enjoy what I ordered so much, I'm pretty sure It would be easy for me to find something in their menu that I would love, so I would not hesitate going back to Chelsea Market if given the chance. Although I've got to admit, I still prefer the casual cool of Mr. Jones' menu when compared to Chelsea Market's but I still enjoyed my experience here nonetheless! 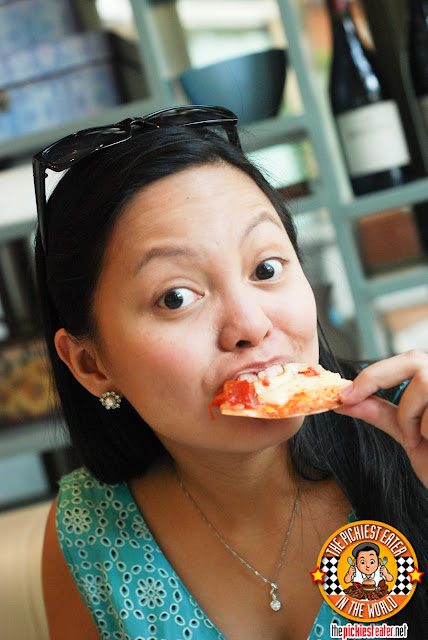