BFAST & BFURIOUS: THE MYSTERIES OF THE AYALA TRIANGLE III 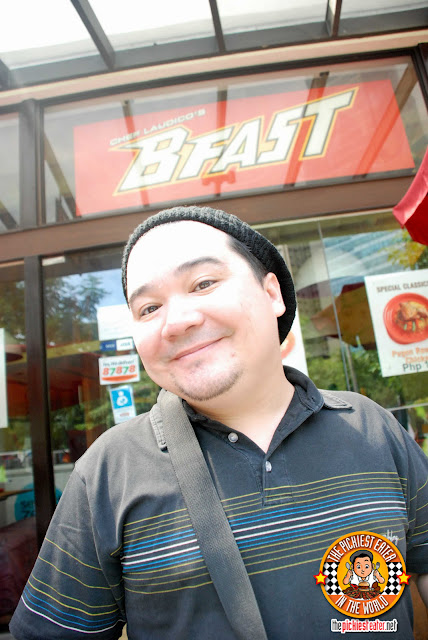 Just last week I found myself alone in the office early in the morning, starving, and dreaming of a breakfast buffet. I asked some of the members of the Pickiest Eater facebook page for suggestions of places with breakfast buffets, and a few came up with some very good recommendations. It was Genevieve Emeroso's suggestion that really stuck with me. Gen simply said "Chef Laudico", and just like that, bells went ringing in my head, and I remembered been wanting to go to Chef Laudico's "BFast" at Ayala Triangle for the longest time (Thanks Gen!)!


After seeing my post, Rina too was attacked by breakfast buffet cravings, and naturally blamed me. She said since I was the one who put the thoughts in her head, it was my responsibility to get them out. So being the dutiful husband I am, right after hearing mass in preparation for the birth of our daughter Rain, we set off on a beautiful Sunday morning to Ayala Triangle  for our long awaited assault on Chef Laudico's breakfast BFast Buffet...


For what might be our last Pickiest Eater adventure in a long time.. 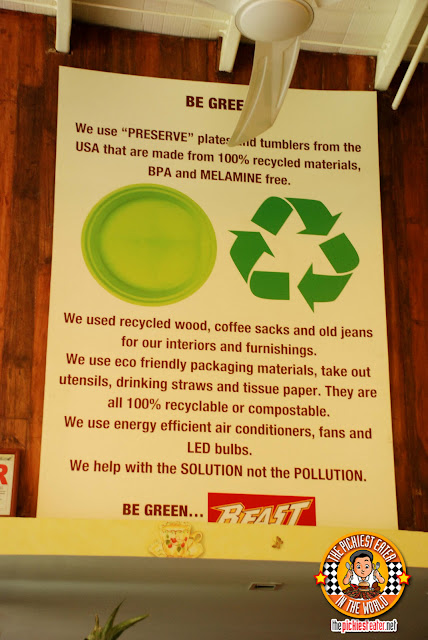 The first thing that caught my attention (we got there a bit early so the bacon wasn't out yet) when I entered the restaurant, was the poster on the wall that proudly displayed the initiatives BFast has taken to "Go Green". The steps were rather simple.. from using plates and tumblers made from Recycled materials for serving their food, as well using recycled materials for their interiors and furnishings. Even the airconditioning and LED bulbs were Energy efficient!

Kudos on the effort, Chef Laudico!

I had met Chef Rolando Laudico years back when I had dinner with my friend, Director Lyle Sacris at Bistro Filipino. "Chef Lau", as Direk Lyle called him, was at the kitchen of his famed restaurant (This was way before my blogging days so i have no pix, sowwy), then joined us at our table for a quick chitchat (He and Lyle are friends). I pretty much listened in to their conversation, but I noticed he was actually quite funny, and you can see his passion for creating amazing culinary concoctions. 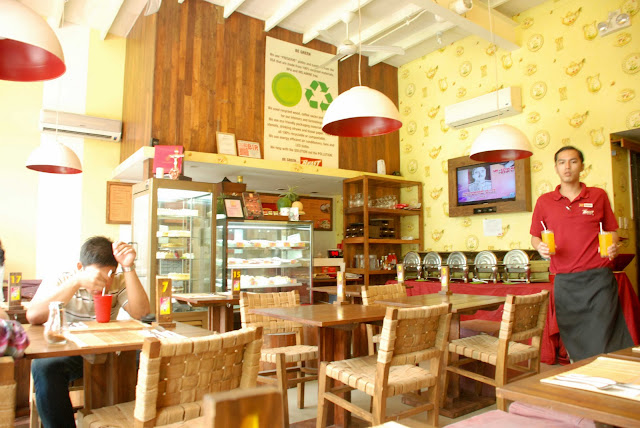 The actual restaurant of BFast is a little bit cramped, but the place does make you feel like you're at the home of the Laudico's. It's cozy and comfortable, and even the dainty wallpaper screams "Home Kitchen" than "Restaurant".


Rina and I got there around 9:45am, and the buffet wasn't open to the public just yet, which I found a bit funny for a restaurant named "BFast". Given the close quarters, the chafing dishes were lined up closed together, which made it a little bit tricky in getting food.


I've often been befuddled by the term "Comfort Food". Seriously, what exactly does "Comfort food" really mean, anyway? After taking a glance at BFast's menu and saw so many dishes that I been craving for, something that brought me back to a simpler time, the term instantly made sense to me Unfortunately for me, all my comfort food choices are extremely oily (Hey they're MY comfort food, so don't judge me). You see, I'm a sucker for great breakfast food, and that is precisely why I knew a trip to BFast for me would almost be tantamount to a child going to Enchanted Kingdom. 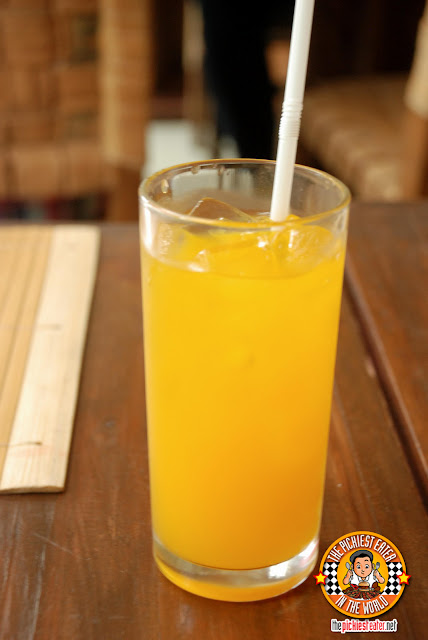 The buffet, which costs only P288 per person, also comes with a refillable glass of Orange Juice. Nothing really spectacular about the orange juice, but a refillable drink always makes a buffet a great deal. 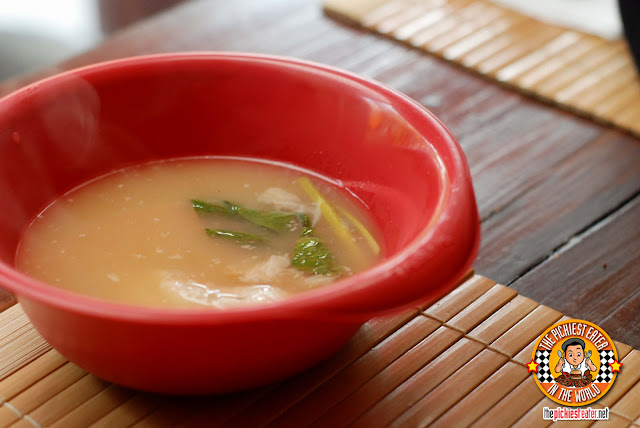 Rina had her mind totally blown away by the Pork Sinigang. After her first spoonful of the soup, she gave me a look like she couldn't believe that it was that good. Rina kept glancing at her plate wishing saying if all she had was white rice and the soup, she'd be good. She said it was easily among the best Pork Sinigang's she's ever tried. I'm hyper acidic so I couldn't really have a go at it. (Besides, I was busy stuffing my face with other stuff. Keep reading). 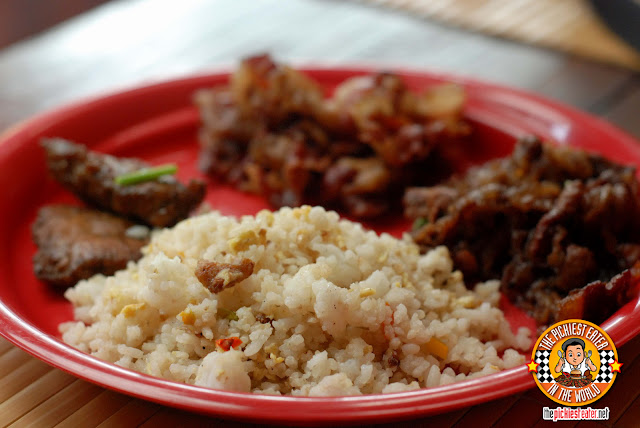 I was told that the rice I had gotten was supposed to be "Seafood Paella", but it looked nothing like any "Seafood Paella" I had ever had. In fact, it seemed more like a subtle tasting Tinapa rice, that was good compliment to all my dishes. 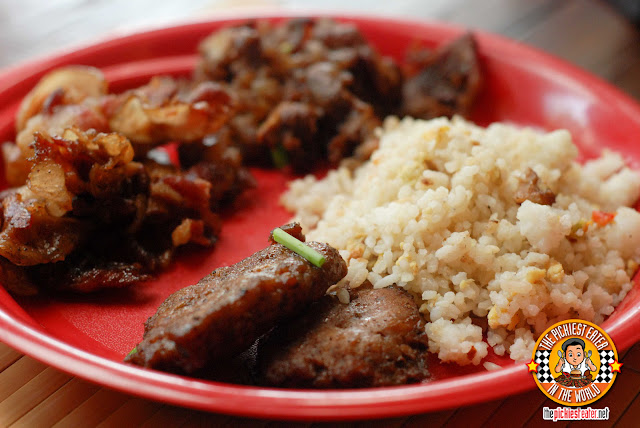 In it's entirety, there were only two dishes that i tried in the buffet that I didn't enjoy very much, and the first was the the Longganiza Steak. I was expecting a tender longganiza patty, but instead I got a very dry and tough chunks of meat. It had a nice blend of herbs and spices in its meat, but it was hard to appreciate when you feel like you were chewing on a rubber slipper. 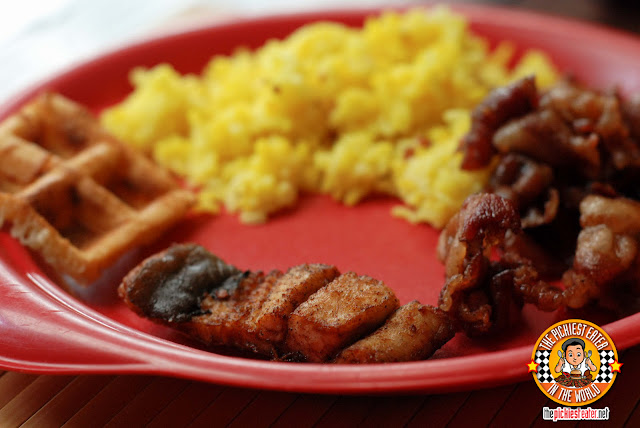 Rina absolutely adored their Daing na Bangus, and rightfully so. It was fried to a golden perfection, and the cuts of fish belly had generous amounts of fat to it. Even without vinegar, it was delicious! 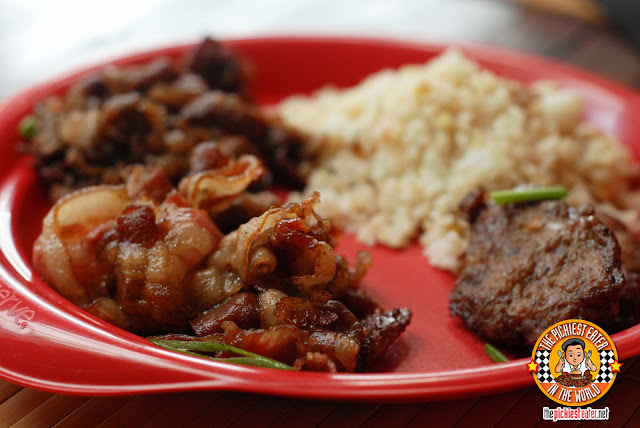 I had told myself that if we got to BFast and the Smoked Bacon was not part of the buffet, I would order the Ala Carte dish separately. As a testament to the fact that the power of prayer truly works (Like I said, we had just come from church, so it was included in my thoughts), It was indeed part of their buffet lineup for the day (It changes daily so I got really lucky). The bacon was immaculately smoked with a delicate sweetness to it, and not to mention cooked just the way I like it.. Not too crispy but with the pinkness of the meat turned into a deep red. I swear I must have gone back for this around four of five times, they might as well have called this "crack" (I'm a bacon addict, I don't deny it). 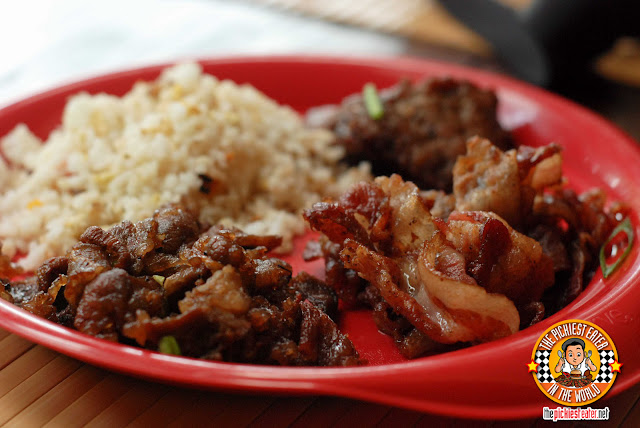 I was pleasantly surprised that their Angus Beef Tapa was on the menu as well for that day. Considering that its a distant cousin of the smoked bacon, people might find it redundant. But not me. Bacon and any of its look-a-likes are welcome on my plate, any day of the week and evidently, twice (Actually closer to four or five times) on Sunday. The thin strips of beef were amazing, and had a touch of sweetness to it, countered by a salty punch to the meat. I was also surprised to find out that Rina, a bacon lover herself, preferred the Tapa to the Bacon (I love her still). 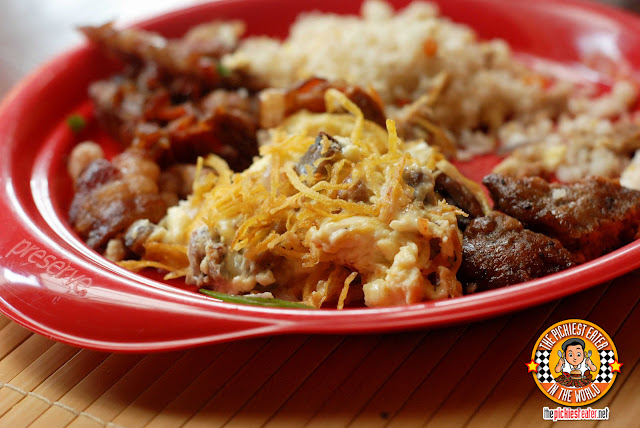 A good breakfast should have some sort of an egg dish in it, and to me BFast's Karnevorous Omelet is THE ultimate egg dish. It had the runny slightly runny consistency that I love in an omelet, yet the mozzarella cheese helped hold it together well when I scooped it up into my plate. I absolutely loved the medley of different meats that were in the eggs, as well as the potato string topping. My only comment was it could have used a tinge more salt, but I think they didn't want to put too much for fear that the Quezo De Bola Cheese sauce would make it too salty. 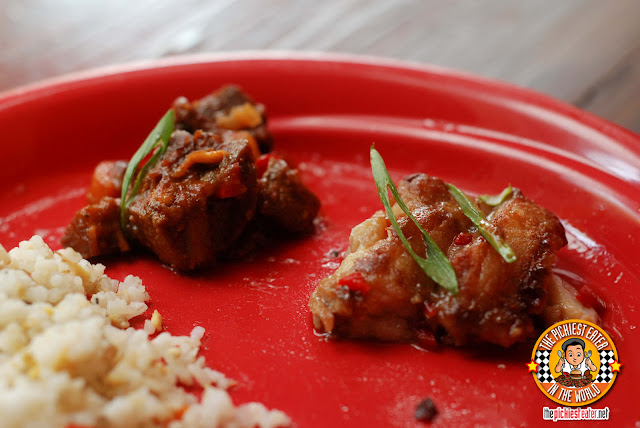 The buffet came with two "Main Courses": Special Beef Stew and Chili Garlic Fish Fillet. I normally stay away from tomato based dishes, but I have to admit, It was hard to resist the beef stew. It didn't have too much acid from the tomato sauce and olives that I usually get in other beef stews. Here, the natural flavor of the beautifully seasoned beef was defintely the star of the show.


The Chili Garlic Fish Fillet just melted in your mouth with every bite. It was a wonderful dish that I found a tad bit too spicy, but I couldn't stop eating it nonetheless, to the point I was already perspiring (Yet I kept on going). 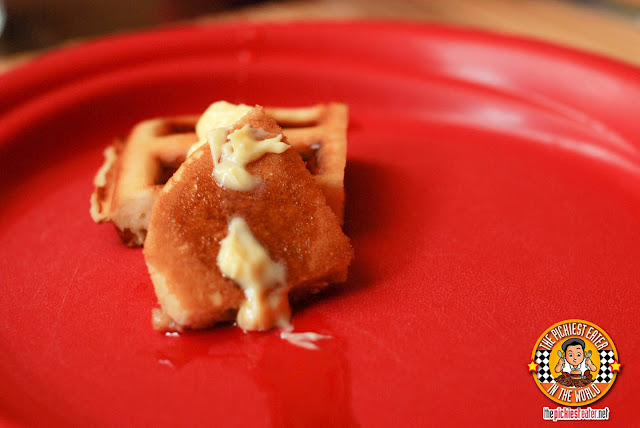 I was getting a little bit full already, so I decided to hit the sweeter stuff, starting with the buttermilk pancakes. They were light and creamy, and extremely addicting. Had I eaten this at the start of the meal, I might not have tasted anything else (Except, of course, the bacon). 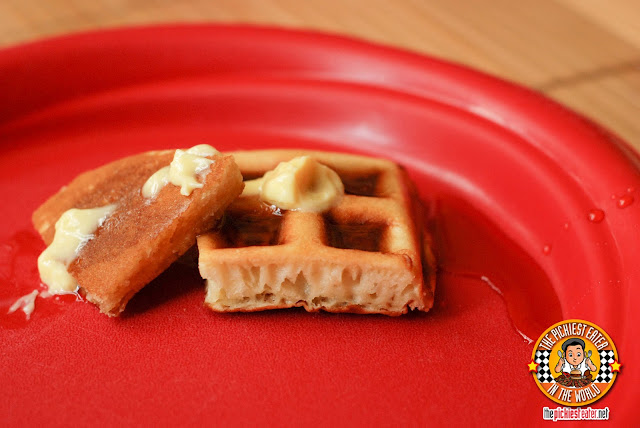 The second "Miss" after the Longaniza Steak, was definitely the sugarless waffles. If the buttermilk pancakes were as soften as cotton, the waffles were dry and almost cardboardesque (I made up that word). As much as I'm sure people who can't eat high quantities of sugar appreciate the effort, this was something that I would not recommend to anyone.


I also found it a little bit strange that butter is not made readily available with the pancakes or waffles. The maple syrup was there, but I actually had to request for some butter from the waiter before it was brought to me. 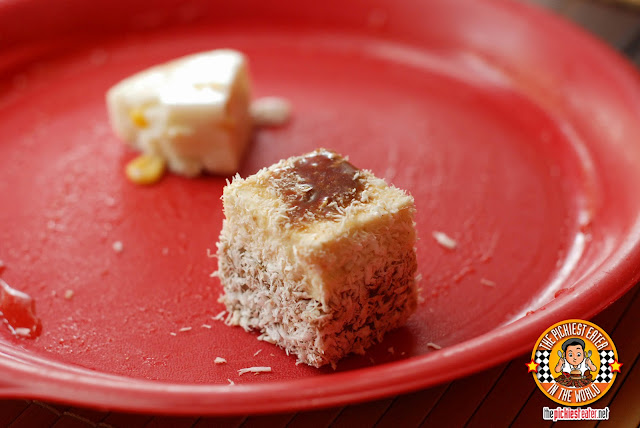 I honestly shouldn't have taken a look at the desserts behind the displays (Once you scroll down to the bottom of the post, you'll see what I mean), because when I tried the desserts that were part of the buffet, I was already less than impressed. one of which was sorta like a kutchinta thingamajig, which I wasn't too crazy over. 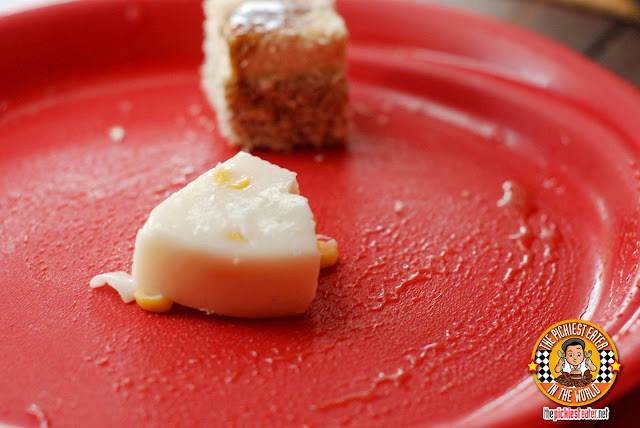 I enjoyed the Maja Blanca panacotta more though. It was nice and creamy, and the coconut milk gave it a more pronounced, sweet flavor. Truth be told, i was too stuffed from everything else I ate to actually enjoy any form of dessert. 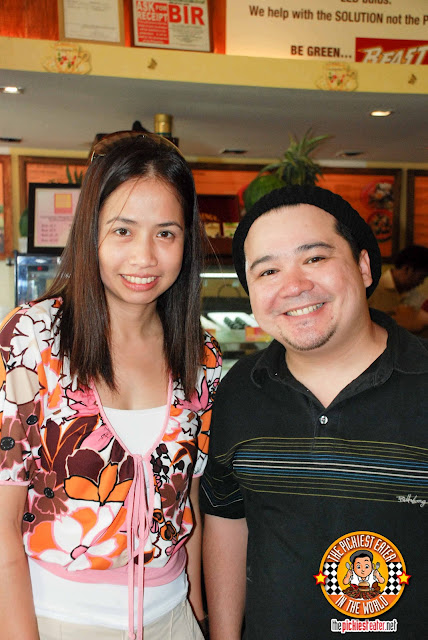 I was fortunate that Chef Jackie Laudico dropped by the restaurant, and I was able to take a picture with her. I felt a bit embarrassed that I was interrupting her breakfast with her son, so I waited a bit for her to stand up to go to the counter before I approached her, and she was rather gracious about it. What can I say, I'm a fan!

Now that I was able to give their breakfast classics a try, when I go back to BFast, I plan to try the Buttermilk Fried Chicken Adobo, and Pugon Roasted Chicken! 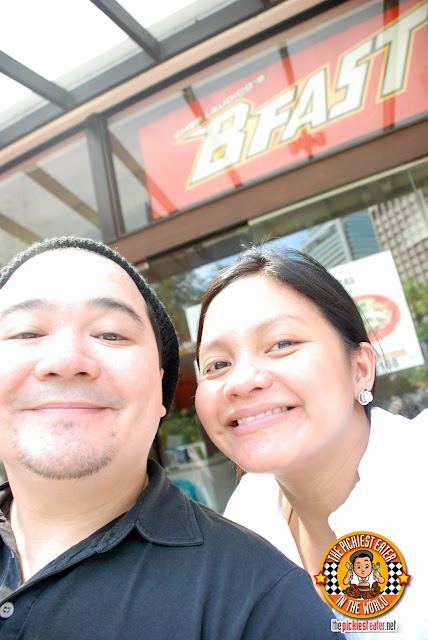 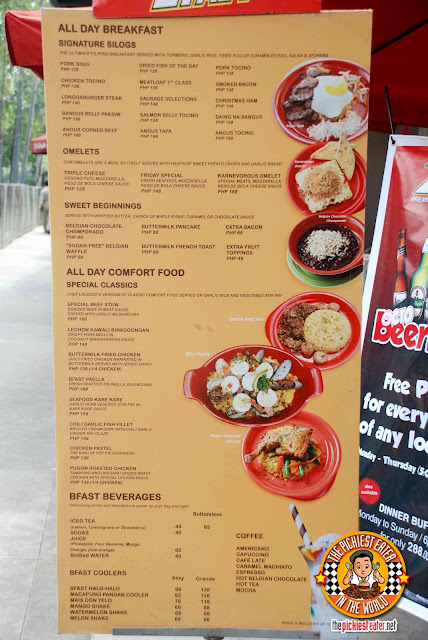 Posted by The Pickiest Eater at 11:55 AM