The weeks before Rina gave birth to our beautiful daughter, Renee' Amelie aka Rain, we would have to go for her check ups with her doctor in QC. Naturally, we would eat out immediately after, which is how we ended up going to "Kanzhu Hand Pulled Noodles" (I'm still craving for their Lamb Dumplings) and "Size Matters" (I still need to try their "Breakfast In Bed" with an English Muffin). We usually head out to QC by 8am so we can be at the Doc's office by around 9am. It gets really packed, so we try to make it a point to get there as early as possible, just to make sure our lunch plans don't get hassled. Unfortunately during this trip, the doctor texted Rina after we had left already, saying that it would be best for us to get to her office by 12noon instead of 9am, throwing a monkey wrench in our lunch plans.


Instead, to pass the time, we decided to visit my grandfather who happens to live in QC as well. We then decided to head off to the doctor's office by 11:30, to get there, "Early". Unfortunately, all her other patients were thinking the same thing, so technically we were already late. The receptionist told us we would be waiting for roughly around an hour and a half or so, and advised us to get some lunch nearby and wait for her text.


With my growling stomach starting to alarm the other patients in the room, we headed downstairs where we saw the huge sign directly in front of our doctor's building.. "Chic-Boy".

First off, lemme just say kudos to whoever thought of the name "Chic-Boy", because its a really witty name for a restaurant that specializes in serving grilled Chicken and pork (Baboy). Anyways, there probably are a lot more interesting places to eat at along West Avenue, but geographically, it was the most ideal place for us to eat at (Besides, I was craving for Liempo).

Chic-Boy is a fast casual restaurant that took the Chicken and Liempo style of grilling by the Cebuanos, and served it up alongside the ever popular Inasal from Bacolod. Since I had just come from Aida's Chicken a few days earlier, I decided to focus on the Cebuano dishes of Chic-Boy (No offense, people of Bacolod). And the awesome part about Chic-Boy is that their food is ridiculously cheap! With "Value Meals" for less than P100 bucks that offer a "Rice all you can" option? Should anyone be surprised that the place is always full during meal times?

Since we got there early, it came as to no surprise that our food was delivered within five minutes or so. My only qualm was that the waiters who were hanging out by the outdoor grill station was causing quite a ruckus amongst themselves, which I found to be rather unprofessional (We were seated outside at the Al Fresco Area because we were with Schatzi). However, as soon as they noticed I was getting annoyed, they shaped up and surprisingly did a complete turnaround, becoming very attentive and accomodating.

The complimentary soup was alright, not as good as Aida's, but not "Cream of Burlington" either. It had a decent flavor to it, and was light enough to make it a good start to the meal. 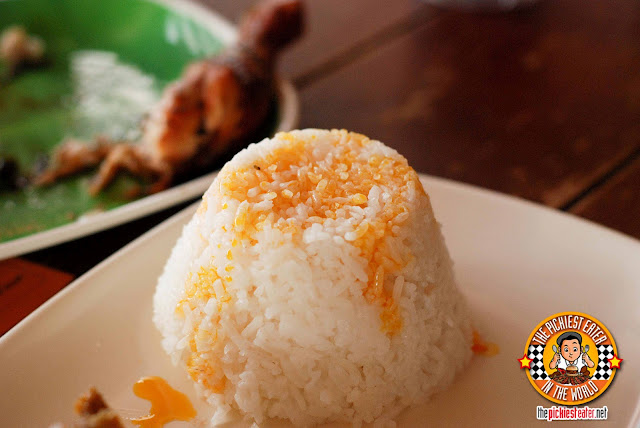 As an appetizer,I couldn't resist ordering the Chicken Skin. (Ok fine.. So I DON'T know how to eat Healthily.. Happy?) It was different from the Chicken Skin that I used to order in the restaurant "Sunburst" during all my years in Cebu, because this had no bread coating whatsoever, which worked well because the flavor of the chicken was dellicious. Though the outer portion was very crispy, when you bit down to the middle portion of the skin, it was a little bit on the softer side. Nonetheless, If the situation required it, I could eat this alone with a scoop of rice, but I would ask them to leave it in the fryer for just a tad bit longer.

Rina was craving for a vegetable dish, so I ordered her their "Gising Gising". I was expecting it to be like Recipe's version (I plan to go there in the very near future), but it was as far away from it as you can imagine. Chic-Boy's version is actually closer to a Chop Suey, that uses a thick sauce similar to the sweet one that you dip your fish balls in. Rina enjoyed the freshness of the vegetables, such as the cabbage & mushrooms, but, like me, was expecting something similar to "Recipes" as well, so you could say that she was a tad bit disappointed.

I got us a half order of the Cebu Lechon Manok (P120 Half, P210 Whole), and was instantly brought back to my younger days in Cebu, where my dad would buy a couple of whole chickens before we would head on to the beach practically every weekend. I am by no means a cook, but in my humble and very opinion, I enjoy Cebu's Lechon Manok over Bacolod's Chicken Inasal, primarily because Chicken Inasal seems to have a stronger acidity to it, while Lechon Manok, with its mix of herbs and green onions, to me is more fragrant (But that's just me).

The Lechon Liempo (P160) could easily be shared by three- or if I'm part of the group, two people. Even without the side of vinegar, this liempo tastes awesome. As with the Lechon Manok, the mix of the herbs and green onions  accentuated the flavor of the pork, and it just sprang to life when it got into my mouth (The flavor, not the pig). And in true "Lechon Cebu" fashion, the crackling of the skin was done beautifully. It let out a wonderful crunch with every bite.

I also loved how they chopped it up into little pieces, which I believed attributed to me eating a lot more than I should have in the first place (Blame it on the pig).

We were in a hurry, so we weren't able to taste their Turrones De Leche.. but if it was anything like the Turon De Crema my mom would make, then its probably kick ass.


With its cheap prices and delicious food, it comes to no surprise that there are branches of Chic-Boy suddenly popping up everywhere around the metro!


So all in all, it wasn't a bad "Last Resort".. everything I ordered was less than P500 bucks!

Check out their menu here at their official Website.

I recently heard about an incident in Chic-Boy that's been going around in facebook recently.. wherein a customer ordered the Adobong Kangkong,
and it came with a caterpillar
(That's what happens when you order vegetables).

Thankfully, nothing like that happened to me, in fact,
apart from that minor hiccup with service when we arrived,
everything was brought to us rather swiftly.

Posted by The Pickiest Eater at 12:38 PM